Arkansas baseball may or may not be rebuilding, but regardless, the Diamond Hogs’ games against Tennessee will be a winner. 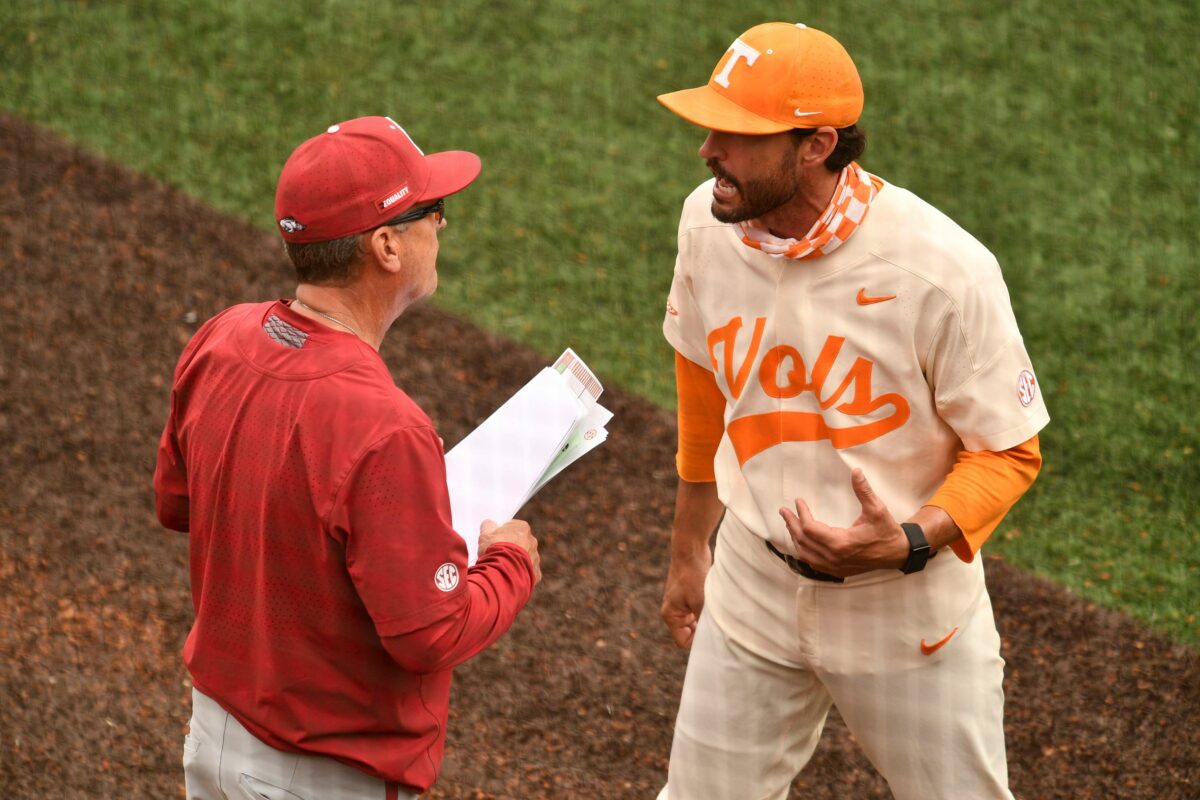 The SEC messed up, fixed it. Now we’re all the better for it.

The Arkansas baseball schedule was released – rather, re-released – on Tuesday along with the rest of their SEC brethren. The league released the schedule initially a few weeks back, but accidentally left some dates out.

Arkansas’ schedule didn’t change much, but what did within it was major. The Diamond Hogs will host Tennessee on April 14-16 from Baum-Walker Stadium in Fayetteville.

Why is Tennessee such an momentous matchup? Well, the Volunteers spent nearly all of last year ranked No. 1 in the nation before falling before the College World Series (much the same way the Diamond Hogs did the year before that). And, more personally, Tennessee is coached by Tony Vitello, who spent several years with the Razorbacks working under Dave Van Horn.

The two coaches had a demonstrative exchance a couple years ago that drew the interest of both fan bases and the ire of each in opposition. Any rematch is sure to be dynamite.

You can see the complete Diamond Hogs schedule below.

Thank heavens the world gets an Arkansas-Tennessee baseball meeting this spring after all. 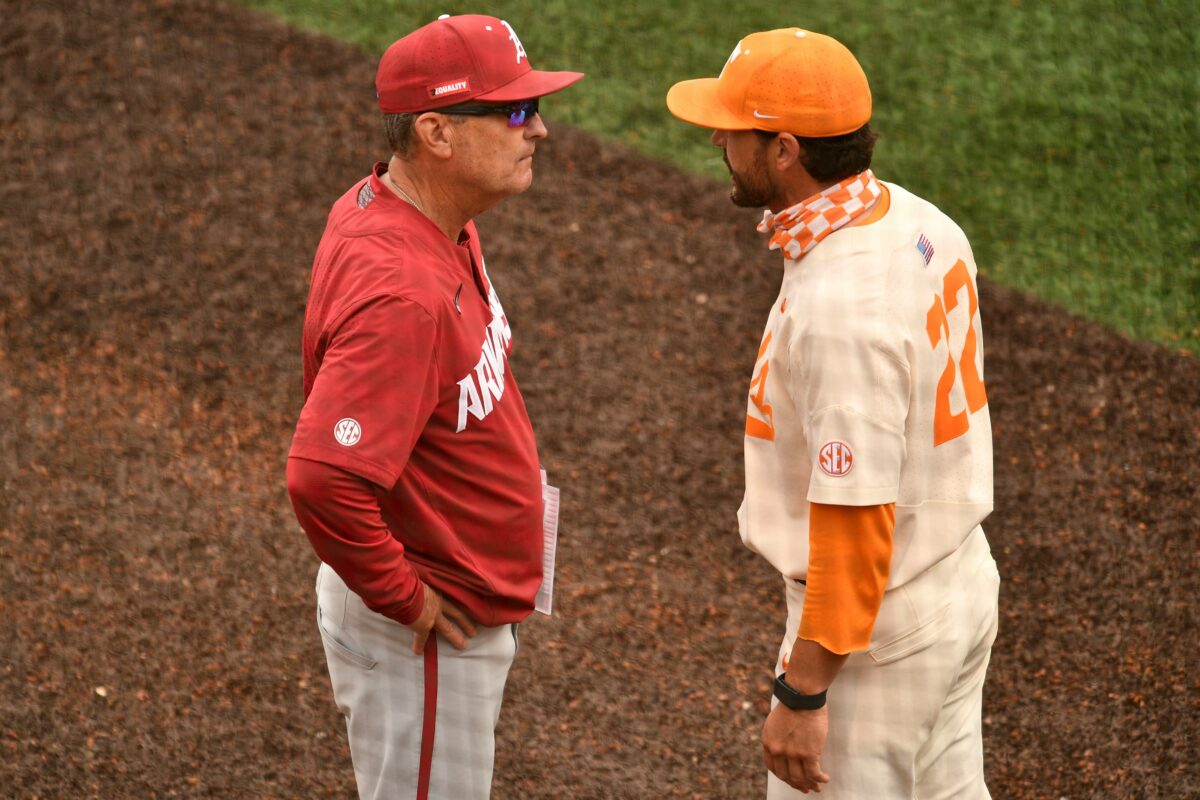 That was a close one.

We’re going to get Arkansas-versus-Tennessee on the baseball field after all, it appears. And by ‘we,’ this writer means we. All of us.

The SEC released the league’s conference schedule earlier in the week but rescinded it on Friday after it was discovered to be inaccurate. Not included was that game between the Diamond Hogs and Volunteers, which was known to be a given, considering the league’s scheduling rotation.

Now, dates and opponents will change and the league will release the revised – correct – schedule sometime in the future. Honestly, expect early next week.

So hopefully you haven’t bought plane tickets or hotels just yet. But even if you have, be glad, anyway, that the college baseball world will get to catch Arkansas coach Dave Van Horn and his former assistant Tony Vitello go head-to-head for three games in the regular season in the springtime. 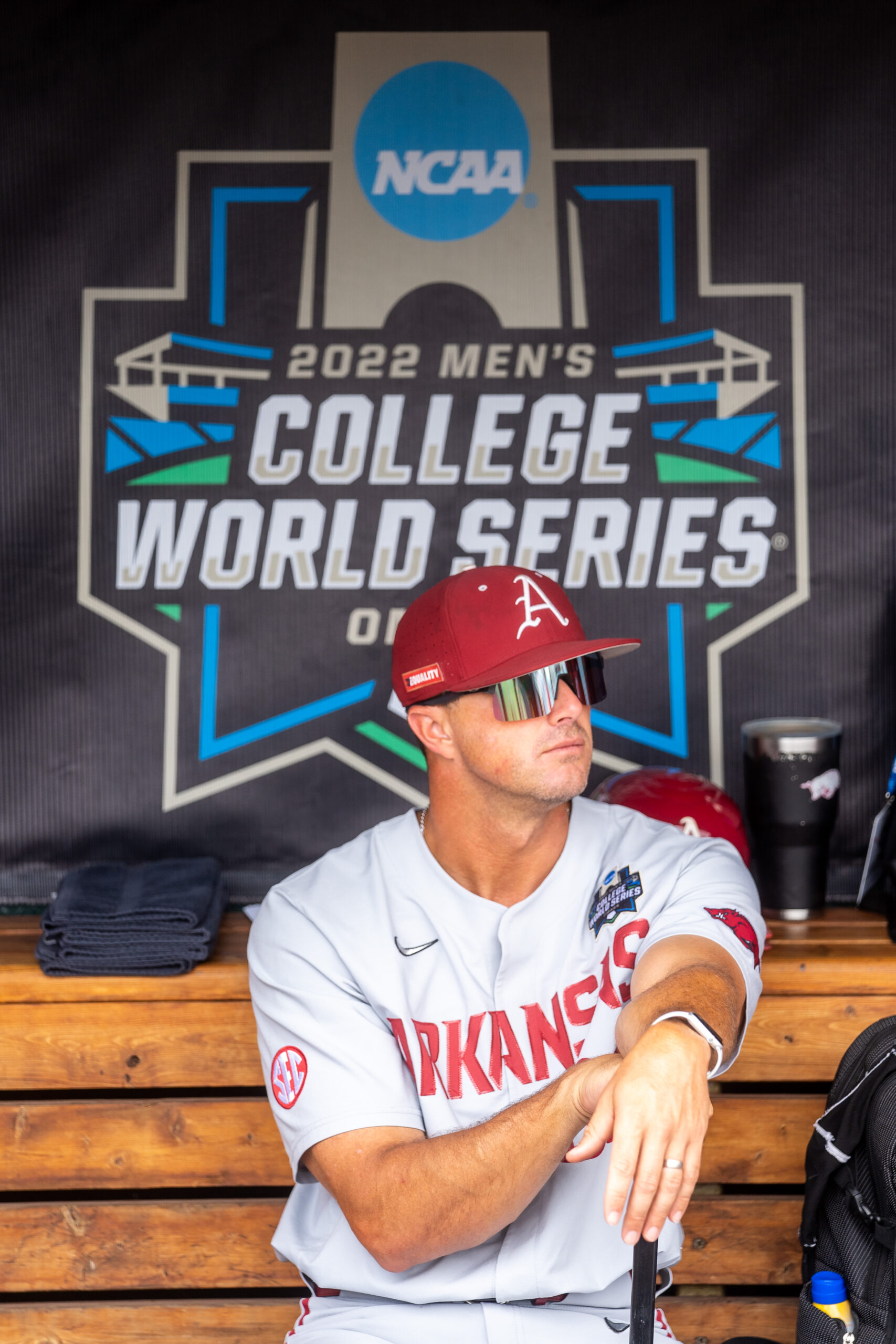 The Diamond Hogs released their 54-game schedule Wednesday afternoon. Arkansas will take on 11 schools that were previously in the NCAA Tournament, three of which advanced to the College World Series.

The Diamond Hogs posted a 46-21 record last year, also punching a ticket to the College Baseball World Series in Omaha, looking to repeat the magic.

The 2023 season will start in February at the College Baseball Showdown at Globe Life Field in Arlington Texas, home of the Texas Rangers. The three-day series is scheduled for February 17-19.

Their opponent has not been announced but SEC members Missouri and Vanderbilt will also partake in the Showdown, with Oklahoma State, Texas, and TCU representing the Big 12.

Arkansas’ schedule includes a 19-game homestand and 10 conference series. The homestand is the longest since 1982 when the Diamond Hogs were coached Norm DeBriyn, who managed the program for 32-years before Dave Van Horn took over.

The Gamecocks are wanting to be the next Arkansas and you can see it in their own storylines. 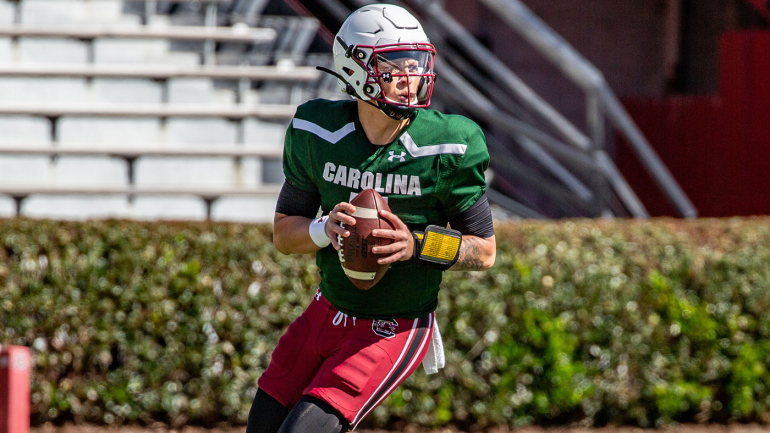 South Carolina wants to be the next Arkansas. And, really, they’re not far off.

Arkansas’ return to respectability has come with a former Georgia assistant coach at the helm. The Hogs have been led by a dynamic, darkhorse Heisman Trophy contender at quarterback and have one of the best linebackers in the SEC.

South Carolina has a former Georgia assistant coach at the helm. The Gamecocks are led by a dynamic, darkhorse Heisman Trophy contender at quarterback and have one of the best linebackers in the nation.

The difference is largely timing. South Carolina is in Year 2 of the Shane Beamer era while Arkansas is in Year 3 of the Sam Pittman era, giving the Razorbacks a leg up by a year.

But that doesn’t mean that South Carolina isn’t going to wait, going to come into Fayetteville and just say ‘well, we’re not Arkansas yet.’

The Gamecocks have their own plans with their own storylines. 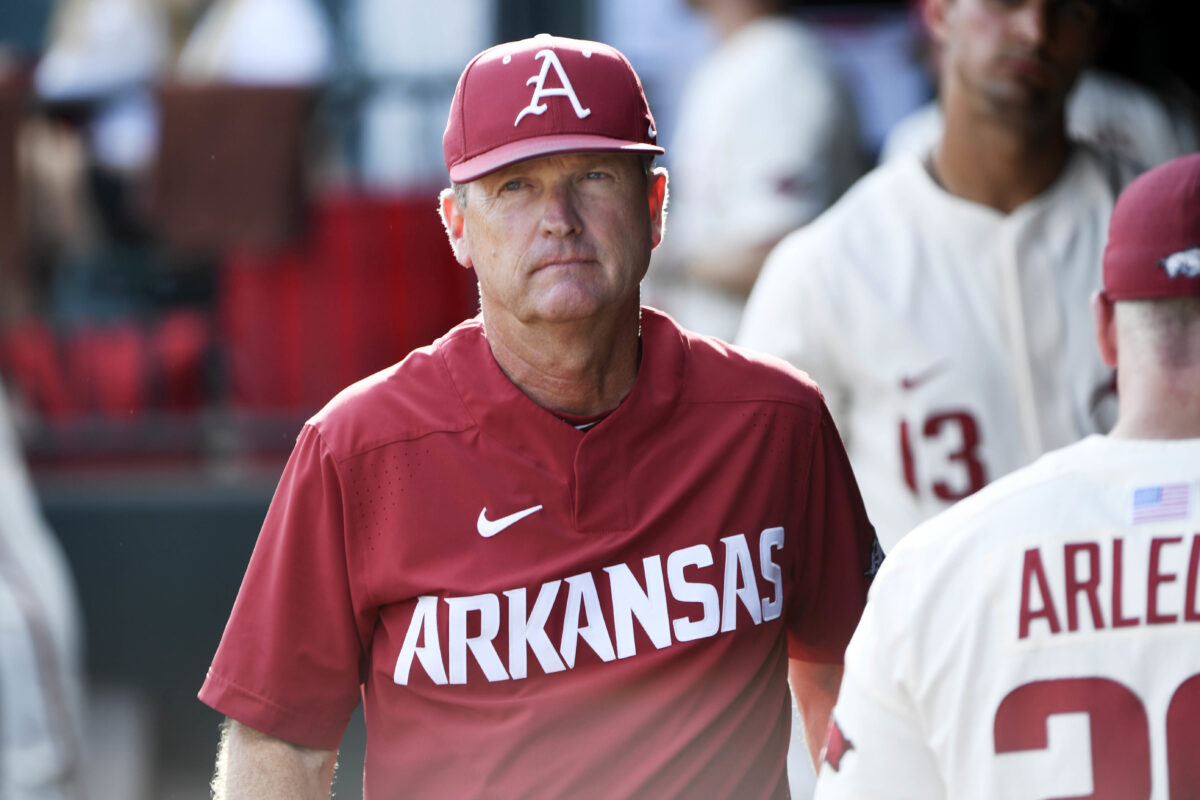 The population explosion of Northwest Arkansas over the last 20 years has been a boon to Razorbacks athletics across the board.

It’s the Diamond Hogs, though, have benefitted the most, probably, when it comes to local talent. Fayetteville High, which sits literally next door to the university campus, has provided Arkansas with a boatload of talent the last 25 years.

The Class of 2025 pitcher announced his commitment via Twitter on Saturday. He picked Arkansas over the courtship of several others, including Tennessee, which is coached by former Arkansas assistant Tony Vitello.

The commitment is far from a surprise. Earlier in August, Delamar had retweeted the commitment announcements of pitchers/outfielders Lincoln Boyle and Russ Martin to Arkansas.

The Chicago Cubs will go to former Razorback Drew Smyly on the mound as they face the Cincinnati Reds in the “Field of Dreams” game Thursday night. 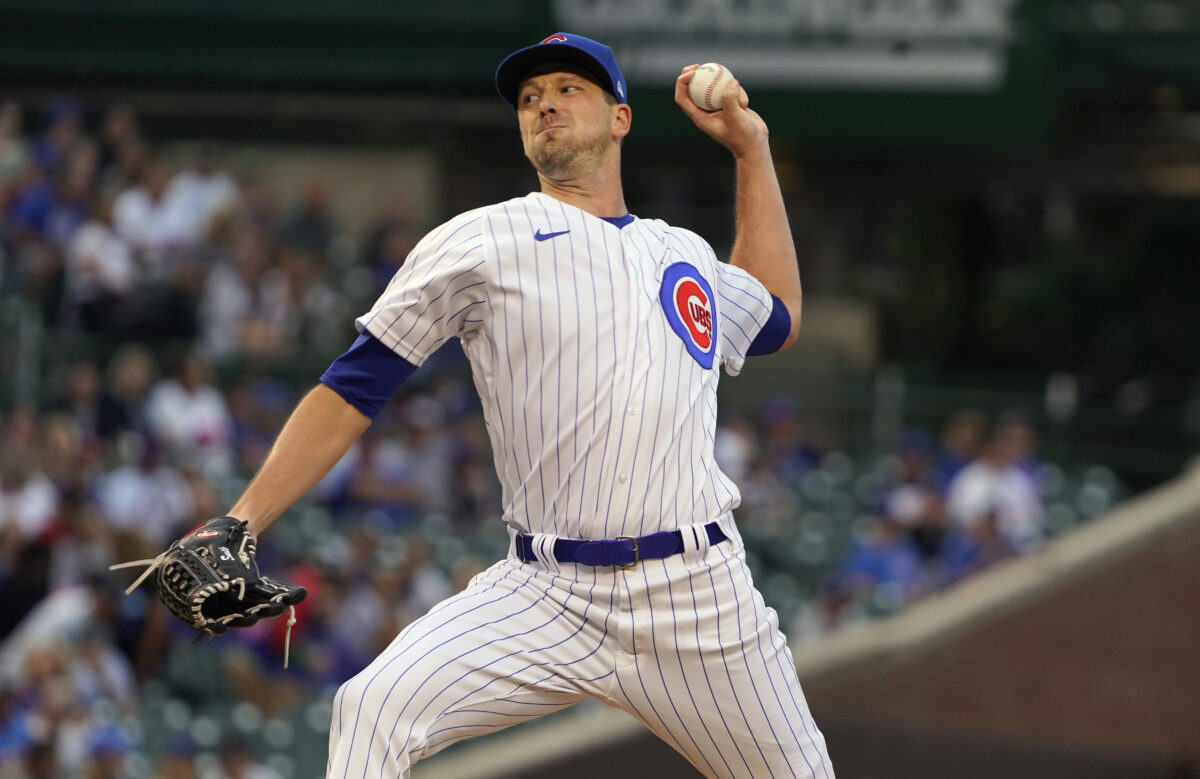 The Chicago Cubs and Cincinnati Reds will open a three-game series on Thursday in Dyersville, Iowa, with the first game being on the site of the 1989 film “Field of Dreams.”

As the Cubs take the field, they will turn to former Razorback, LHP [autotag]Drew Smyly[/autotag] on the mound to go to battle with the Reds. Smyly, in 14 starts this season, holds a record of 4-6 with a 3.97 ERA and 52 strikeouts over 65.2 innings pitched.

On the other side, Arkansas will also be represented on the Cincinnati Reds. Second baseman [autotag]Matt Reynolds[/autotag] is currently on the 40-man roster for the Reds, and has recorded three home runs and 18 RBI. Reynolds was a part of Arkansas’ roster from 2010-12, and was a teammate of Smyly’s for one season in 2010.

The Cubs and Reds meet in the “Field of Dreams” game Thursday night at 6:15 p.m. CT on FOX.

By competing in the State Farm College Baseball Showdown, Arkansas is guaranteed a rematch against a 2021 tournament opponent. 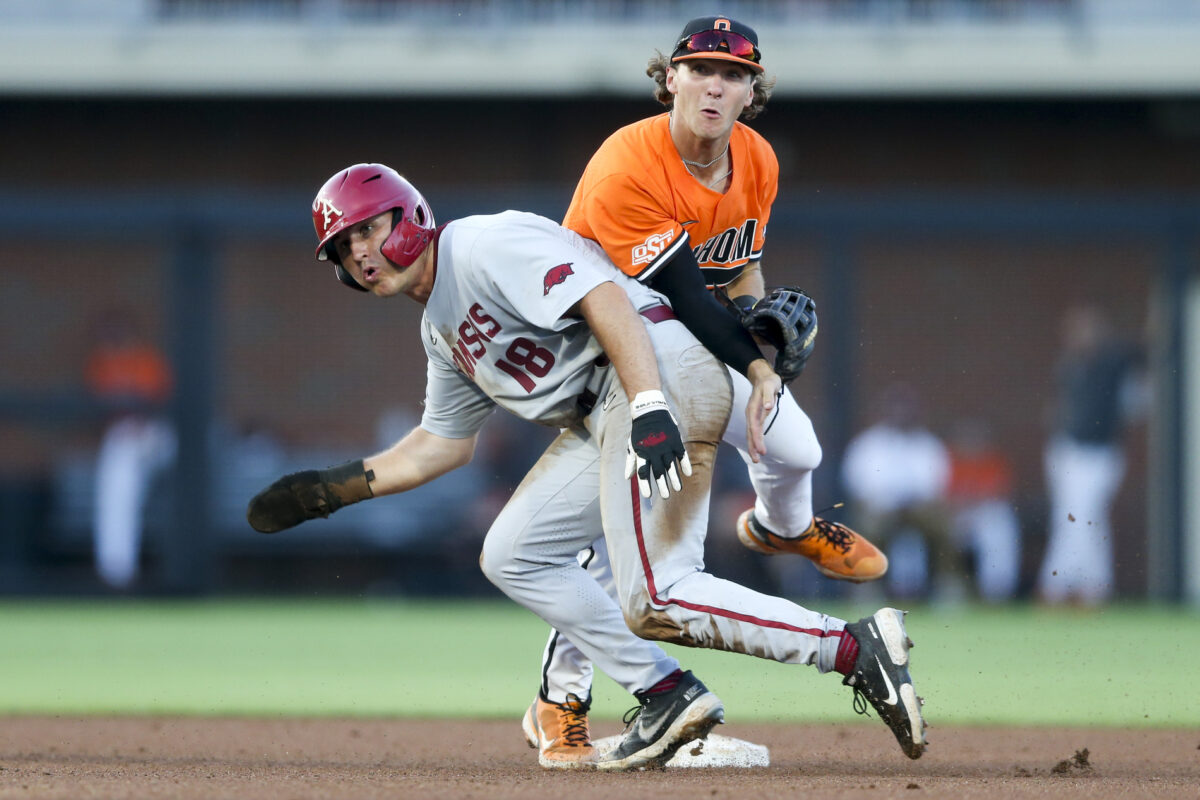 The Razorbacks will get a chance to capitalize on that weekend by opening the 2023 season at the home of the Texas Rangers, as part of the State Farm College Baseball Showdown February 17-19.

“We’re thrilled to be included in the field for the 2023 State Farm College Baseball Showdown at Globe Life Field,” Arkansas head baseball coach [autotag]Dave Van Horn[/autotag] said in a press release. “It’s a great season-opening event at an incredible venue right down the road from Fayetteville. We loved our experience there to begin the 2021 season, and our fans did too.”

Texas was only limited to two hits, both were by Murphy Stehly. The announced attendance for the game was 17,587, which marked the second-highest attended college baseball game of the season.

As part of the State Farm College Baseball Showdown, Arkansas is guaranteed a rematch with Oklahoma State. The Razorbacks and the Cowboys battled in three classic games during the Stillwater Regional in the 2022 NCAA Tournament, with Arkansas winning the deciding game, 7-3, to advance them to the Chapel Hill Super Regional, and ultimately to the College World Series.

Cayden Wallace had a great two-year career in Arkansas in every aspect of the game. 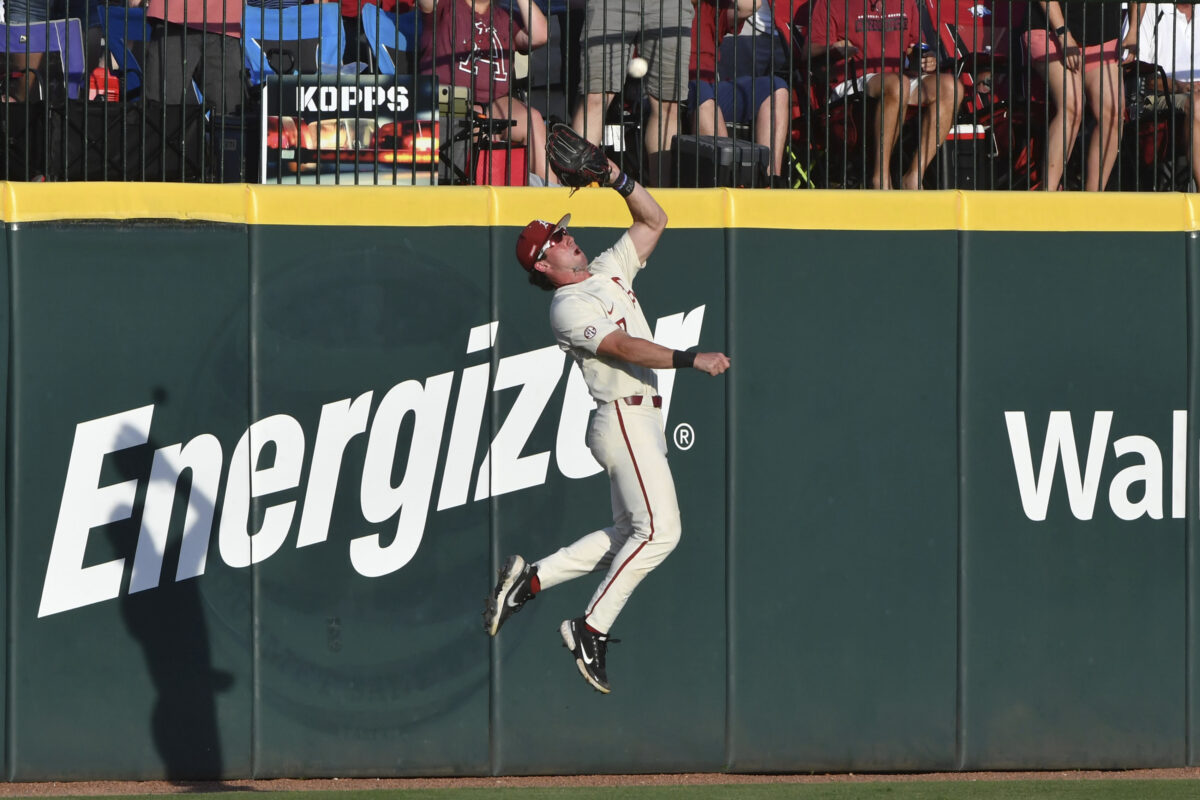 The 2022 Major League Draft began by Arkansas standards in round two, when third baseman [autotag]Cayden Wallace[/autotag] was taken with the 49th overall pick by the Kansas City Royals.

Wallace was one of three players taken in the second round of the MLB Draft, joining RHP [autotag]Peyton Pallette[/autotag] (White Sox) and second baseman [autotag]Robert Moore[/autotag] (Brewers).

Wallace started all 67 games for Arkansas in 2022 at third base. He led the team in RBI with 60, and in doubles with 20. He joined Brady Slavens atop the team’s home run leaderboard with 16, and was second in hits with 82, one hit behind the team’s leader, Michael Turner.

In the field, Wallace had a career fielding percentage of .956, committing just 11 errors in two seasons. In 2022, Wallace made 29 putouts while assisting on 110 outs. He, along with fellow draft picks Jalen Battles and Robert Moore, formed one of the best defensive infields in the SEC.

Here’s a look back at the best moments from Wallace’s two seasons at Arkansas:

Andrew Benintendi is officially a Yankee. Here’s a look at the best images from his first game in pinstripes. 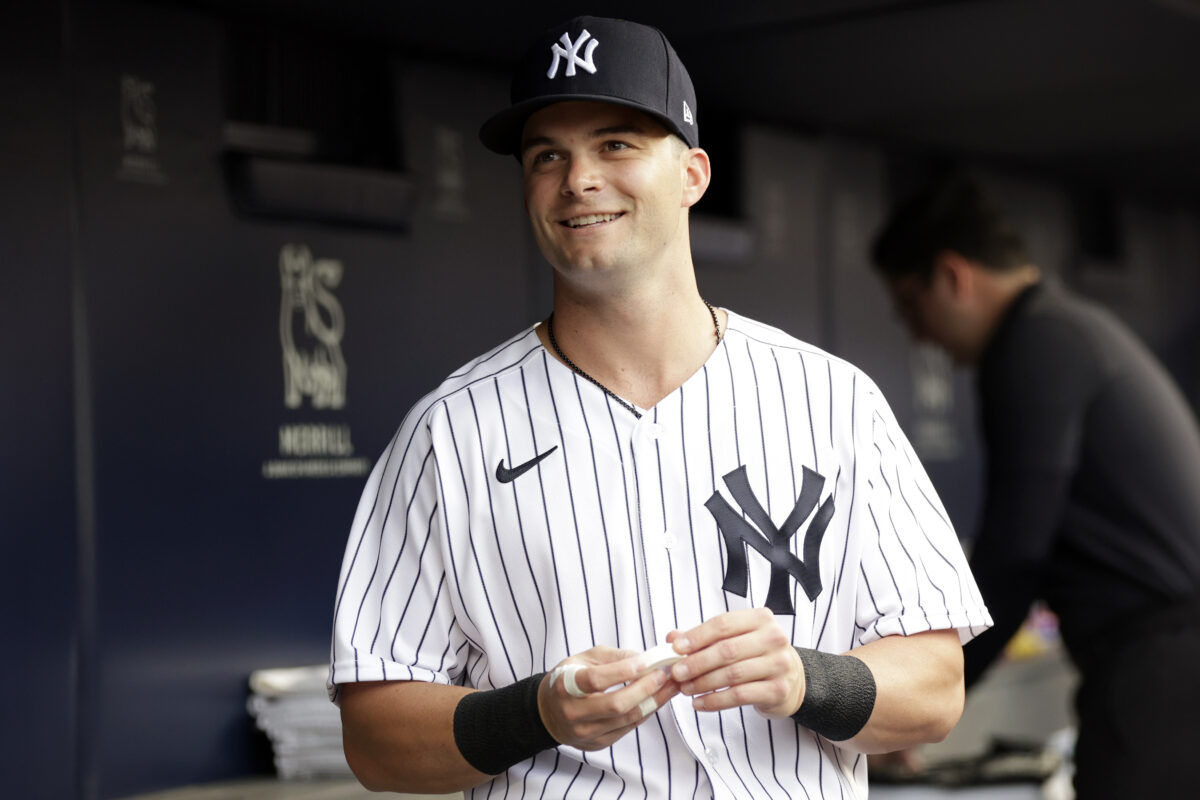 One of the most decorated baseball players in Arkansas history became one of the most popular trade pieces ahead of the Major League Baseball trade deadline.

Former Razorback outfielder Andrew Benintendi was traded to the New York Yankees from the Kansas City Royals late Wednesday night in exchange for three minor leaguers, in an effort to give the Yankees a boost in production both at the plate and in the field ahead of the postseason.

Thursday night, Benintendi was in uniform for the Yankees game, ironically against his former squad, the Royals, at Yankee Stadium. Benintendi went 0-for-4 with one strikeout.

Here’s a look back at Benintendi’s first game as a member of the New York Yankees:

Former Hogs pitcher Mark Adamiak was one of two remaining ex-Arkansas players yet to sign. 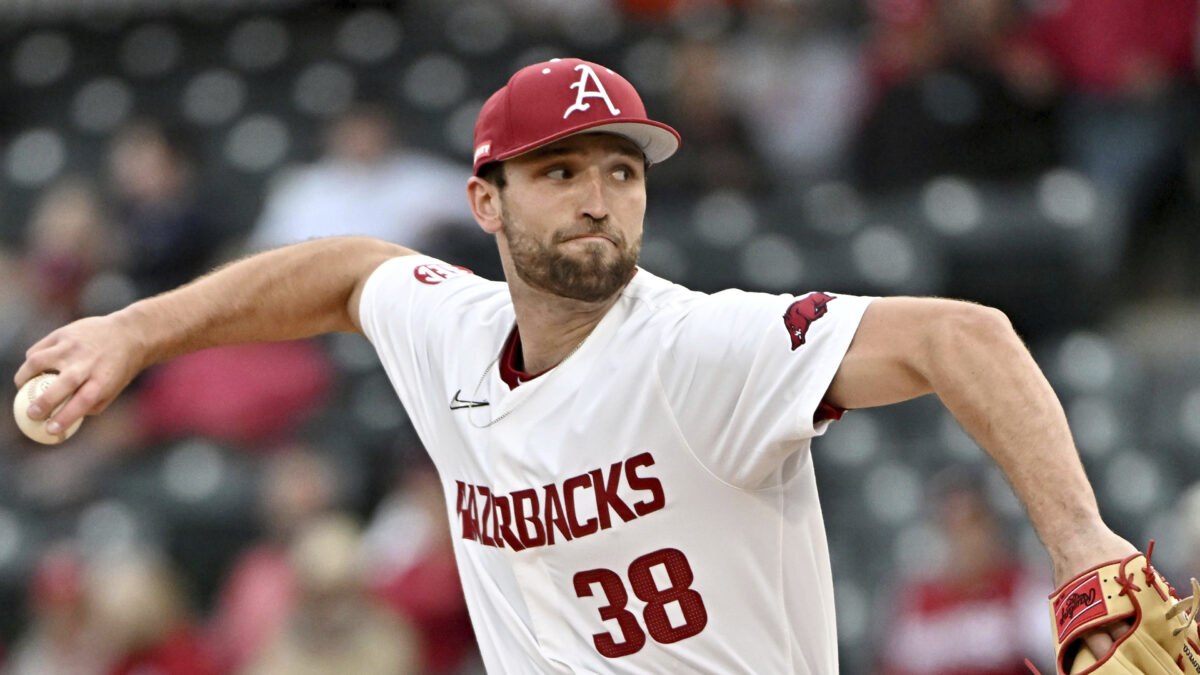 Mark Adamiak becomes the latest Hog to sign his first professional contract in the MLB.

Adamiak went to the Oakland Athletics in the 15th round of the 2022 MLB Draft, a part of nine Razorbacks selected. During the MLB Draft League, Adamiak hit 97 miles-per-hour on the gun with his fastball and a consistent slider in the mid-80s.

With the 454th pick in the 2022 MLB Draft, we have selected Mark Adamiak from Arkansas.#MLBDraft | #DrumTogether pic.twitter.com/N3Kgz1y2CG

The redshirt sophomore didn’t play any games in 2022 due to injury. In his freshman year, he appeared in 11 games for the Razorback, claiming two wins and 20 strikeouts in 15 innings.

The only Razorback remaining to sign after last week’s draft is third baseman Cayden Wallace, who was drafted 49th overall by the Kansas City Royals in the second round.

The deadline for drafted players to sign is Aug. 1.