The Packers and Chiefs are the favorites. The Steelers and Eagles have the longest odds. 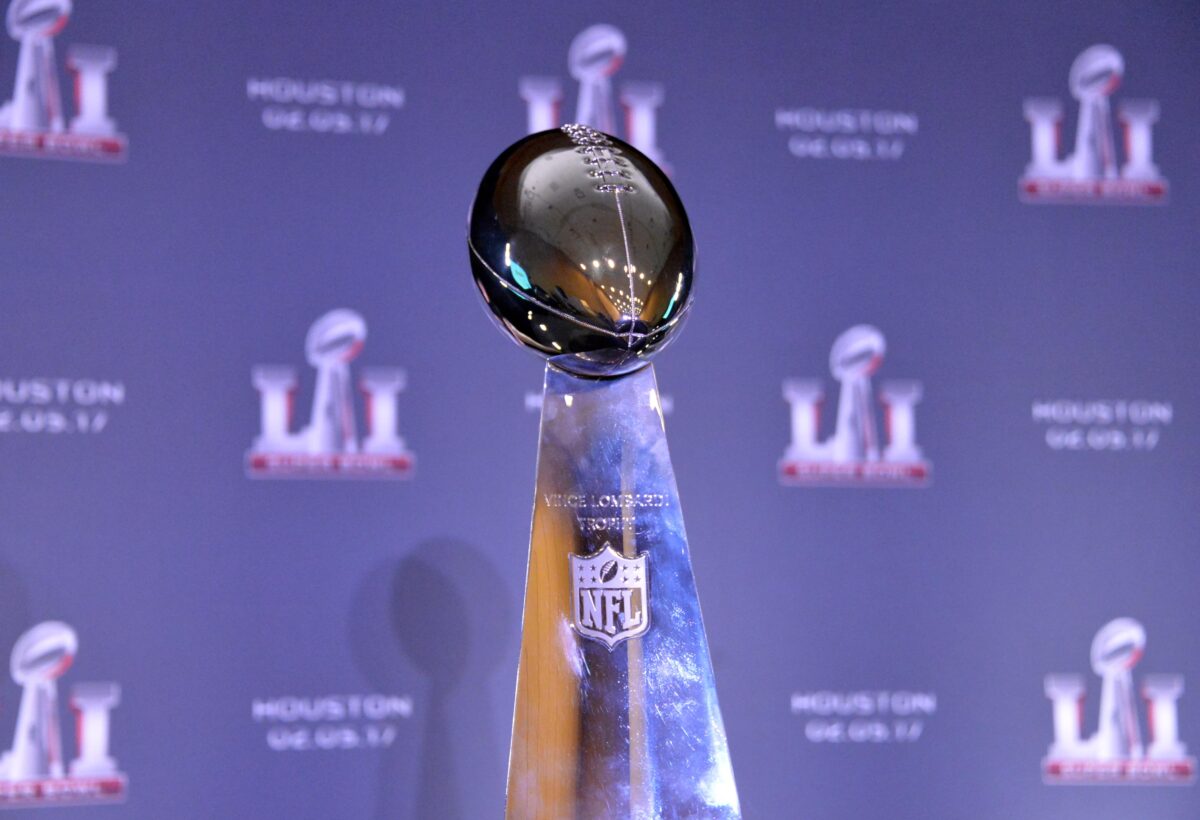 The NFL playoffs begin this weekend. 14 teams — seven in the NFC and seven in the AFC — vie for the coveted Lombardi Trophy, signifying they are Super Bowl champions.

According to betting odds from Tipico Sportsbook, there are two clear favorites to win it all. There are also some dark horses and then some long shots.

Below are the Super Bowl odds for each of the 14 teams who made the postseason. 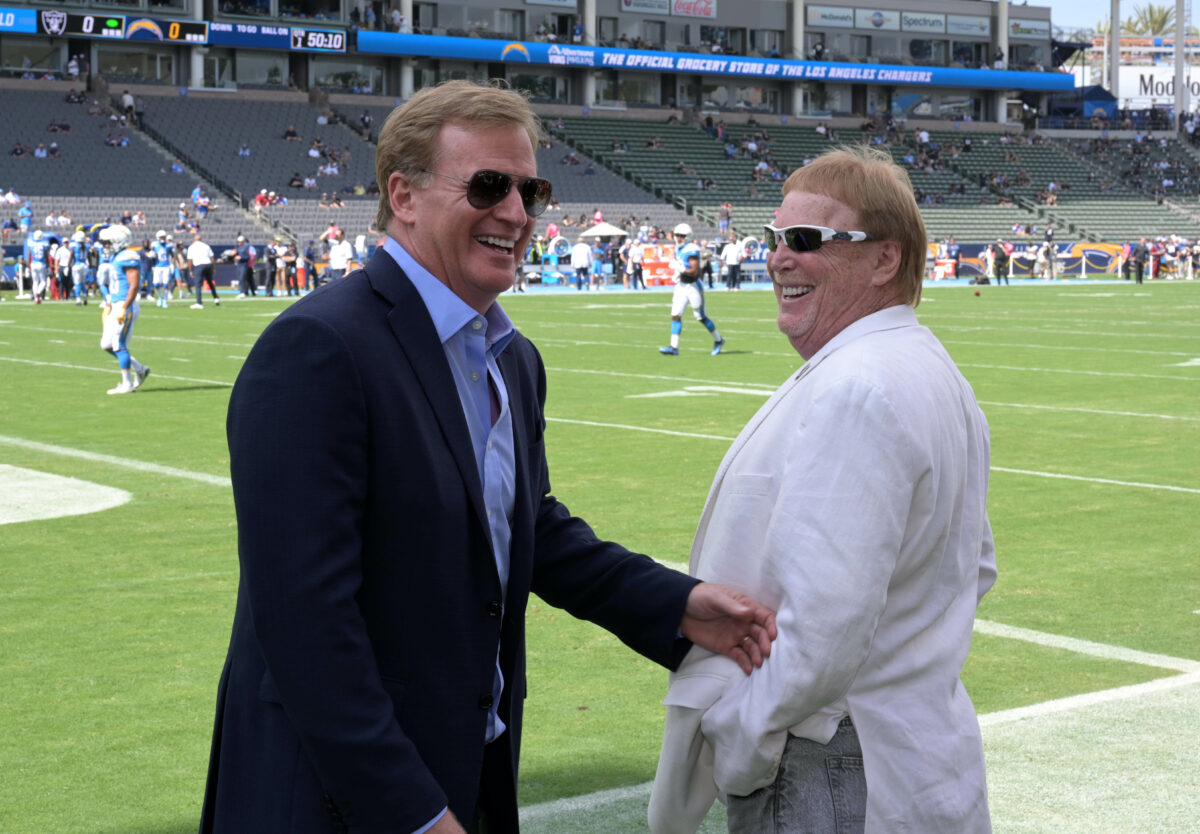 The NFL made it official on Wednesday. Super Bowl LVIII will be played in Las Vegas’ Allegiant Stadium with the Raiders as the host team.

The biggest game. The brightest stage.

The Super Bowl is coming to @AllegiantStadm and Las Vegas. #SBLVIII

The game is scheduled for Feb. 11, 2024. The venue switched from New Orleans to Sin City because of the NFL’s decision to go to a 17-game schedule.

That pushed the Super Bowl’s date back and right smack into the middle of Mardi Gras in New Orleans. The city can handle a lot of partying but those two events would have been overwhelming at the same time.

The Raiders Are Thrilled The National Football League Has Selected Las Vegas To Host Super Bowl (58) LVIII In February 2024..

Hosting The 2022 Pro Bowl..The 2022 NFL Draft.. And Now The 2024 Super Bowl Are Just Some Of The Ancillary Benefits Resulting From The Public-Private Partnership We Created With The State Of Nevada To Bring The Raiders To Las Vegas And Build Allegiant Stadium.

It’s Only The Beginning.. But For Now…

Las Vegas … The Super Bowl Is Coming To The Sports And Entertainment Capital Of The World!

If you want to get in early for priority access it is only a $2,500.00 deposit per person.

Check out all the amazing action you could be a part of in Vegas ➡️ https://t.co/KyZv26pvHW
#SBLVIII | @NFL | #OnlyWithOnLocation pic.twitter.com/3QK7gf6gV3 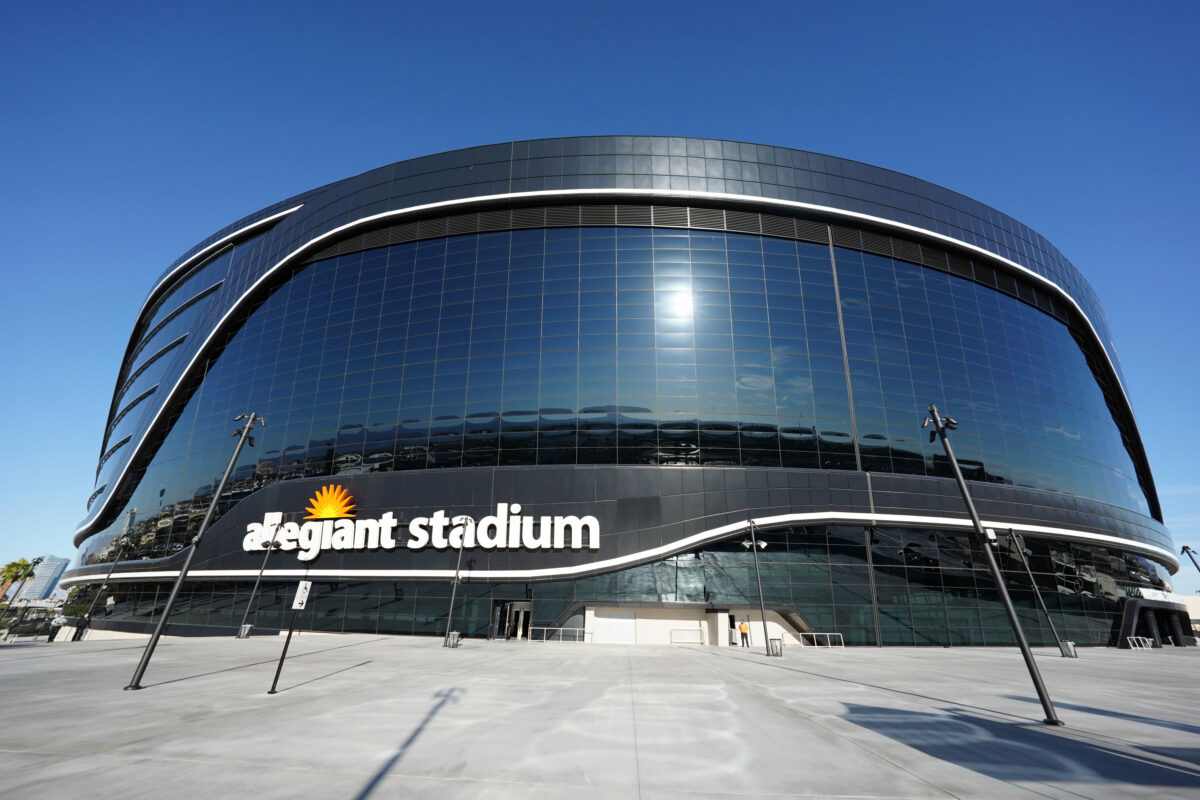 The Super Bowl to be played in the year 2024 — call it LVIII or 58 — is expected to take place at Allegiant Stadium in Las Vegas.

The Las Vegas Review-Journal first reported the news on Monday, saying an official announcement will come from the NFL on Wednesday.

The game was originally scheduled for the New Orleans Superdome.

However, the addition of a 17th regular-season game to the NFL schedule moved the Super Bowl from Feb. 4 to Feb. 11, which created a conflict with Mardi Gras in New Orleans.

Las Vegas put together an ambitious and multi-leveled plan to convince NFL owners of its viability to accommodate the biggest yearly sporting event in North America. The city’s reputation as one of the entertainment capitals of the world coupled with the necessary hotel, convention center and activation space were convincing arguments in luring the event to Southern Nevada.

Las Vegas has quickly emerged as one of the NFL’s go-to markets for big events. In addition to Super Bowl LVIII, Las Vegas is also scheduled to host the Pro Bowl on Feb. 6 and the NFL draft April 28-30.

The league and Las Vegas Raiders declined to comment but a commemoration of the official announcement is expected to take place using the lights of the Las Vegas Strip at dusk on Wednesday.

The New York Jets traded for Super Bowl MVP QB Joe Flacco. How many other Big Game MVPs have been traded in NFL history? 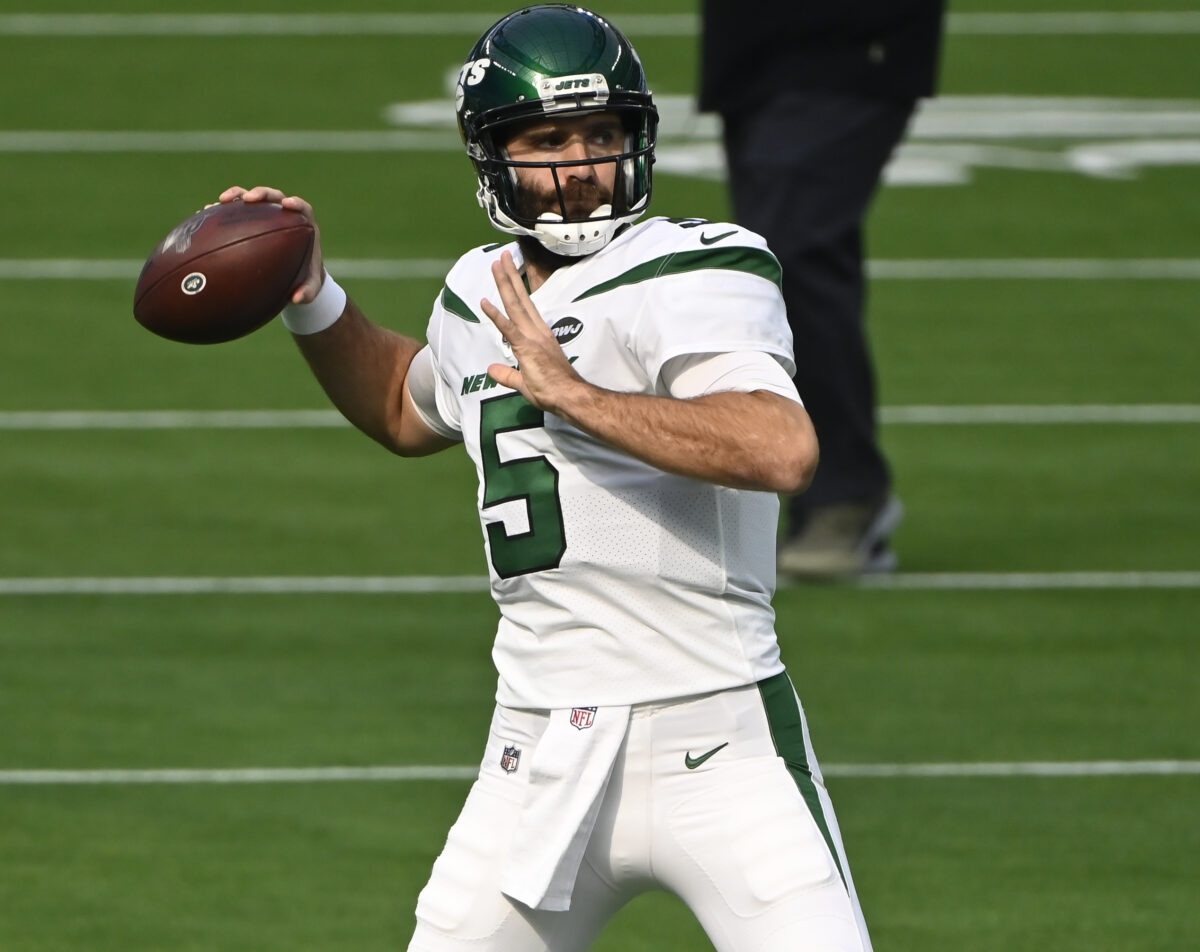 The New York Jets are looking for help at quarterback, which means they did what any NFL team would do and trade for Joe Flacco.

Even if Flacco finished the year with the Philadelphia Eagles, he already had the distinction of being the fifth Super Bowl MVP that was traded. Here is a look at the others.

Honorable mention — Joe Namath was inevitably going to revitalize his career in Southern California. However, the Los Angeles Rams and the New York Jets couldn’t agree on an appropriate trade package. The Jets waived Namath, and he signed with Los Angeles in 1977. If not for that, Namath would have been the first Super Bowl MVP to be traded. 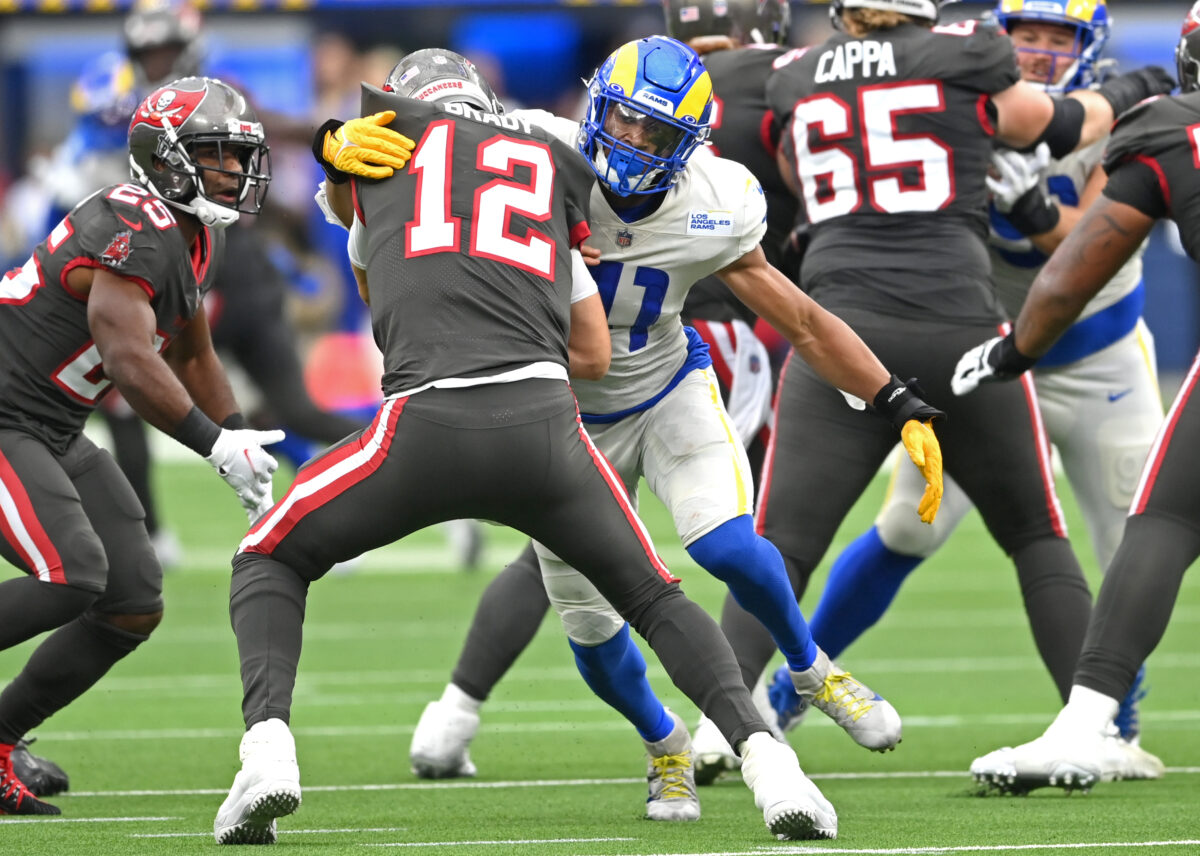 Here’s one the trivia buffs will love.

This may never have happened before and if it did someone would have to dig and dig to come up with the facts.

The Chiefs defeated the 49ers in Super Bowl LIV and the Buccaneers followed that by winning the NFL championship over Kansas City in LV.

The Los Angeles franchises would like nothing better than for this to be an omen because Super Bowl LVI will be in Los Angeles on Feb. 13 at SoFi Stadium.

The Cardinals have some of the longest odds to win the Super Bowl but they are the best long-shot team to bet on this year. 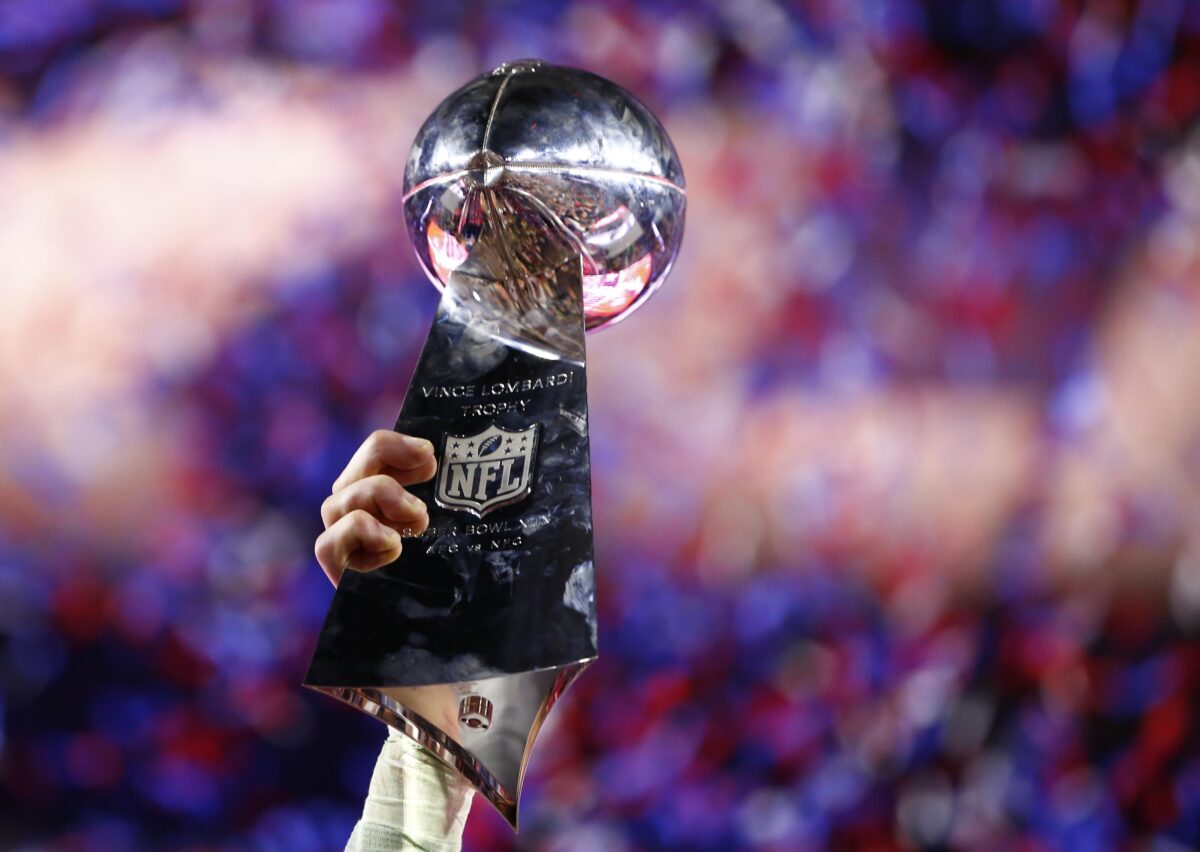 The Arizona Cardinals will begin the 2021 season in seven days when they take on the Tennessee Titans on the road. They have high hopes for this season after just missing the playoffs last season.

Quarterback Kyler Murray enters his third season and they added talent on both sides of the ball.

They are considered a long shot to be Super Bowl champions, according to Tipico Sportsbook.

However, as I wrote for Sportsbook Wire, despite their long-shot status, they are one of the best bets to win the Super Bowl.

This is a pick solely if you want to take a chance on a long shot. Of all the long shots, the Cardinals are appealing, as they just missed the playoffs last season and have a budding star at quarterback in Kyler Murray.

If he can take a step forward like Buffalo Bills QB Josh Allen did last year, the Cardinals will be incredibly exciting. They are better at almost every position, they have weapons on offense and a healthier, improved defense on paper. Of all the long shots, the Cardinals are the best pick to win Super Bowl 56.

This isn’t to say that they are a favorite or that this is a prediction they will. But in terms of betting value, they make a great bet.

All four teams in the NFC West have a Super Bowl ceiling. Longer odds make the Cardinals incredible value. A lot has to go right for the Cardinals. Murray has to improve more. J.J. Watt and the other aging veterans must stay healthy and be productive.

If you are going to look for a long shot to bet on, the Cardinals are that team. 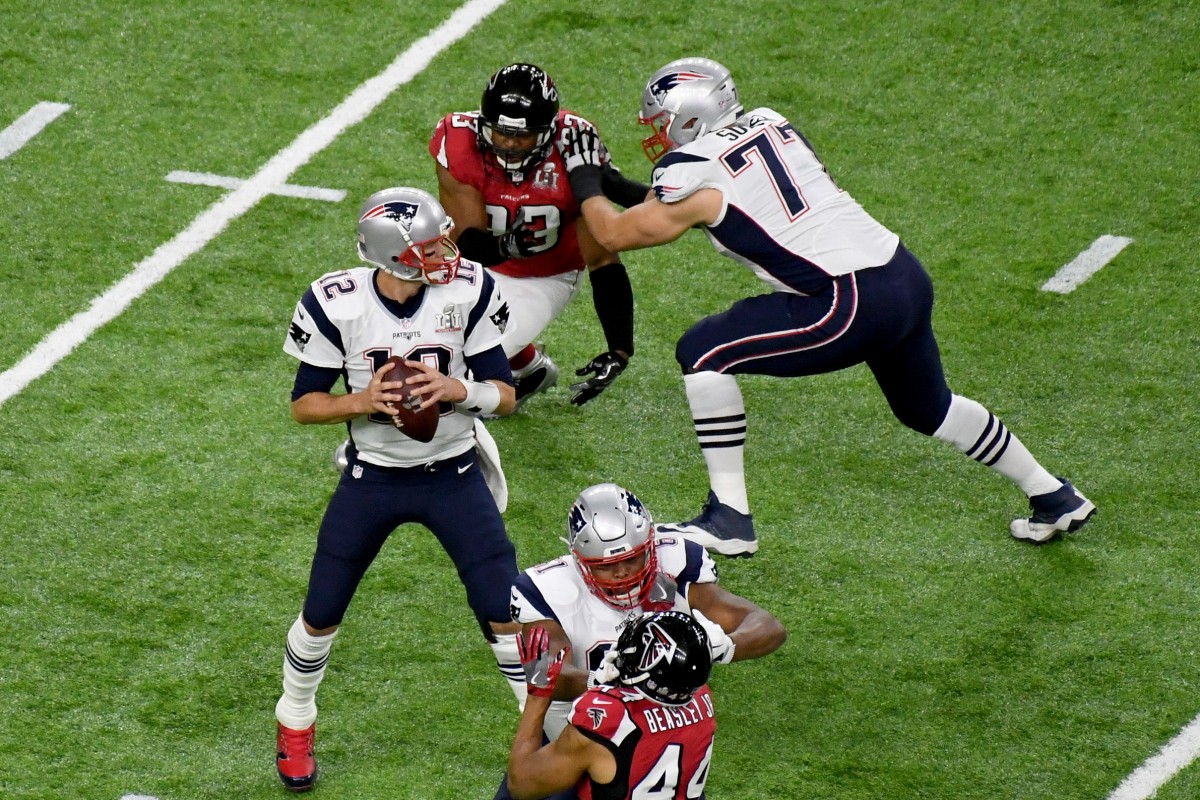 The Tampa Bay Buccaneers quarterback rarely misses an opportunity to crack a joke on social media, even if it’s about himself. So of course the seven-time Super Bowl champion couldn’t miss the opportunity to troll the Atlanta Falcons on Sunday, (3/28).

Brady and the New England Patriots infamously came back from a 28-3 deficit in Super Bowl LI to defeat the Falcons — making Atlanta the butt of a joke for years now. He’s made jokes about the comeback victory in the past on social media and his Instagram story on Sunday was just another example — and probably not the last.

A day later… since I missed it yesterday 🤷🏻‍♂️ https://t.co/h1J0Q7QDup

This joke may take a while before it’s lived down. 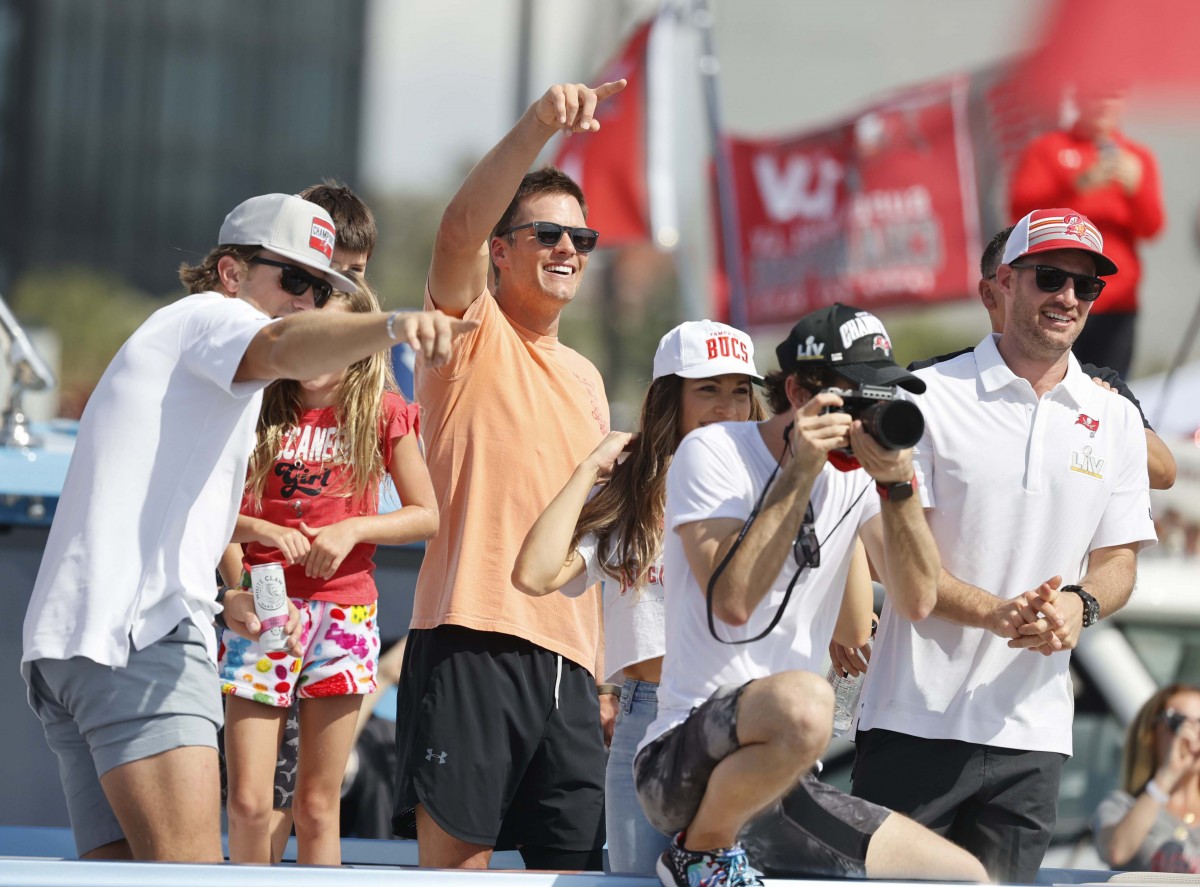 #GoBucs QB Tom Brady will have a minor surgical procedure on his knee, one that coach Bruce Arians described as "a clean up."

Brady, 43, was named Super Bowl MVP for the fifth time on Sunday as the Buccaneers throttled the defending champion Chiefs, 31-9, at Raymond James Stadium.

Brady threw for 201 yards and three touchdowns. He did not appear bothered by any knee issue during Super Bowl LV.

Brady wore a brace on his left knee Wednesday during the Buccaneers’ Super Bowl boat parade Wednesday. But wearing the brace is not uncommon for the 43-year-old Brady, who also wears it when golfing and during other recreational activities.

His counterpart in Super Bowl LV, Chiefs QB Patrick Mahomes had successful surgery for a turf toe problem on Wednesday. 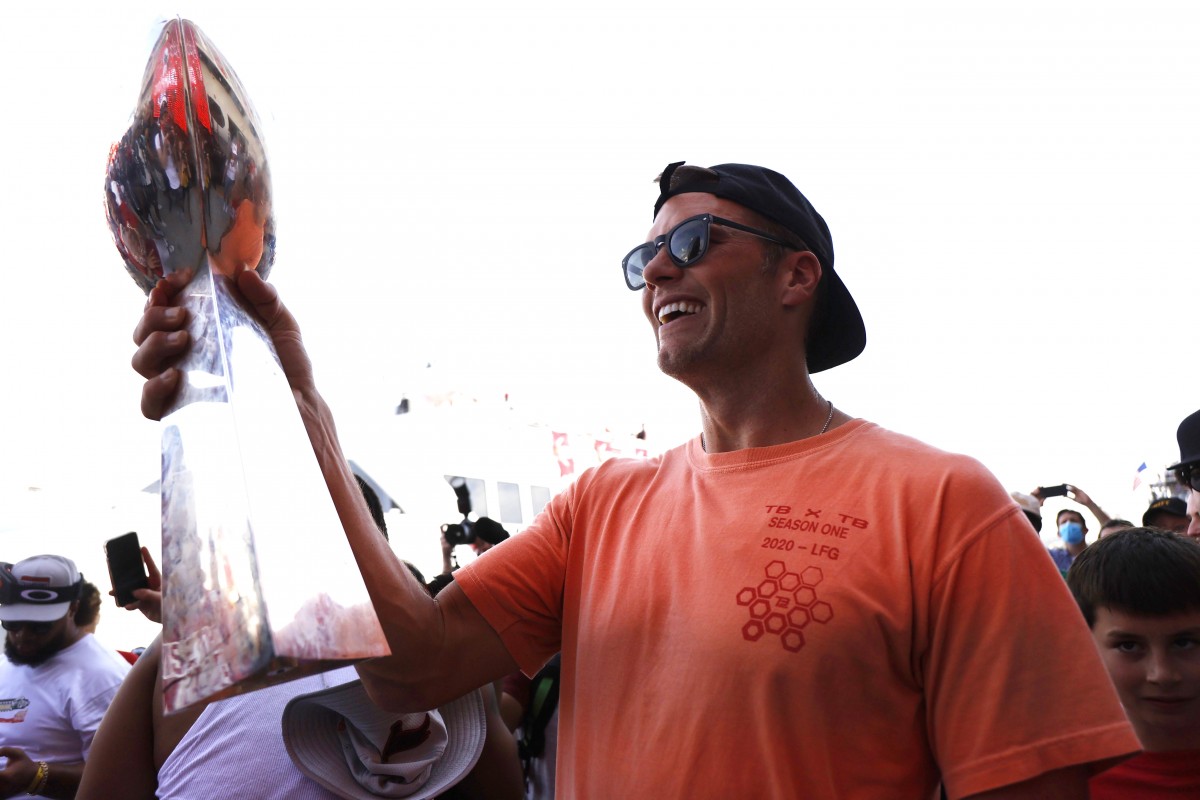 Tom Brady’s social team is as sharp as the Tampa Bay Buccaneers’ quarterback is at his craft. And they delivered again, summing up the magical run that concluded with his seventh Super Bowl ring.

Starting with Brady and buddies on his boat with the Vince Lombardi Trophy, the video takes you through the victory Sunday in Super Bowl LV with the message: Still here. Never left. To be continued …

All aspects of the celebration are encompassed, including Brady’s toss of the Super Bowl trophy from one boat to another. Harrowing as the trophy could have wound up sinking.

However, when it comes to Brady the pass was a strike.

As good as the video is, nothing will compare to his mini-series with Rob Gronkowski.

And their splendid commercial … quite the duo. 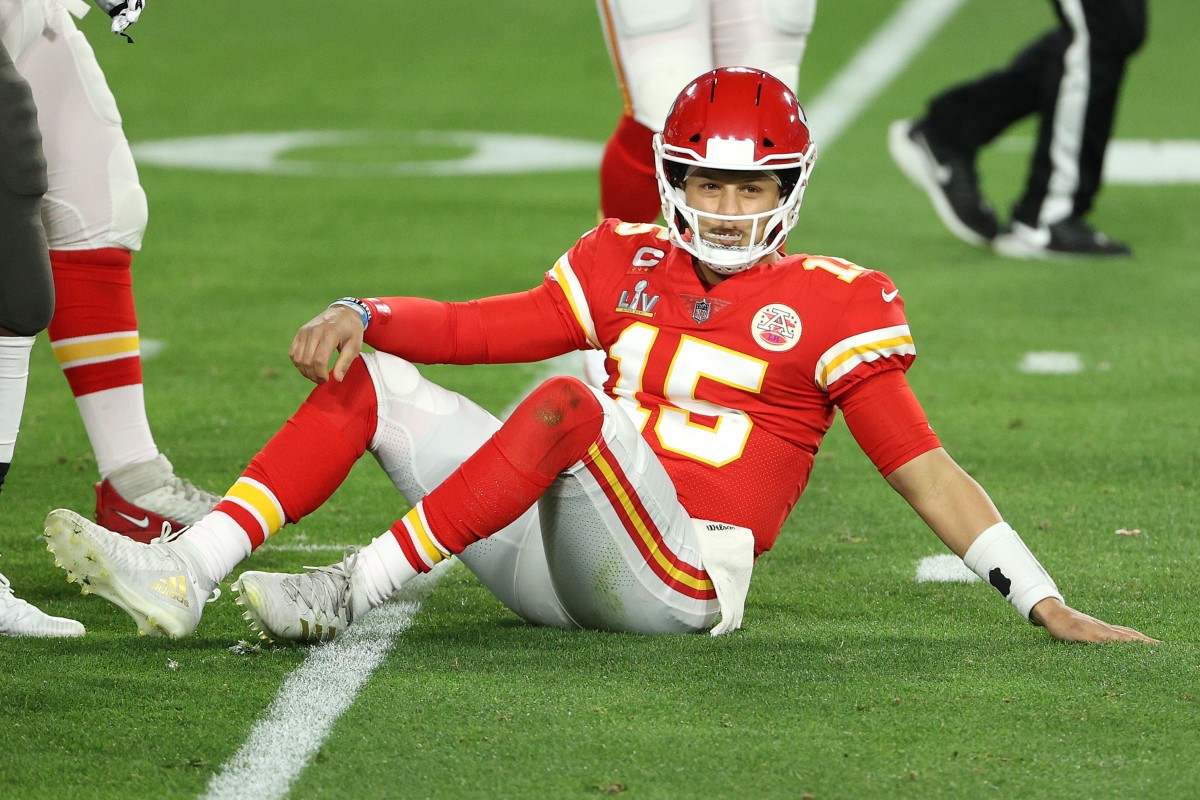 Patrick Mahomes will have surgery to repair his turf toe injury, according to a report on Tuesday. The surgery, which will be performed by Dr. Robert Anderson, is scheduled to take place on the former league and Super Bowl MVP on Wednesday.

Mahomes is expected to be ready to go by training camp, according to a source.

Mahomes was 26-of-49 for 270 yards, zero touchdowns, two interceptions, and a passer rating of 52.3 in Sunday’s 31-9 loss to the Tampa Bay Buccaneers in Super Bowl LV.

Kansas City failed to score a touchdown for the first time since Mahomes became a starter in 2018. Overall as a starter, he is 38-8. He is 6-2 as a starter for the Chiefs in playoff games.

“Yeah, I can’t say the toe was a problem when I played last week or two weeks ago and I played well on it,” Mahomes said. “It’s something you battle through. You’re playing football you have to battle through injuries. We’ll look at it tomorrow and we’ll make a final decision on if we’re going to have to have surgery on it or not.”