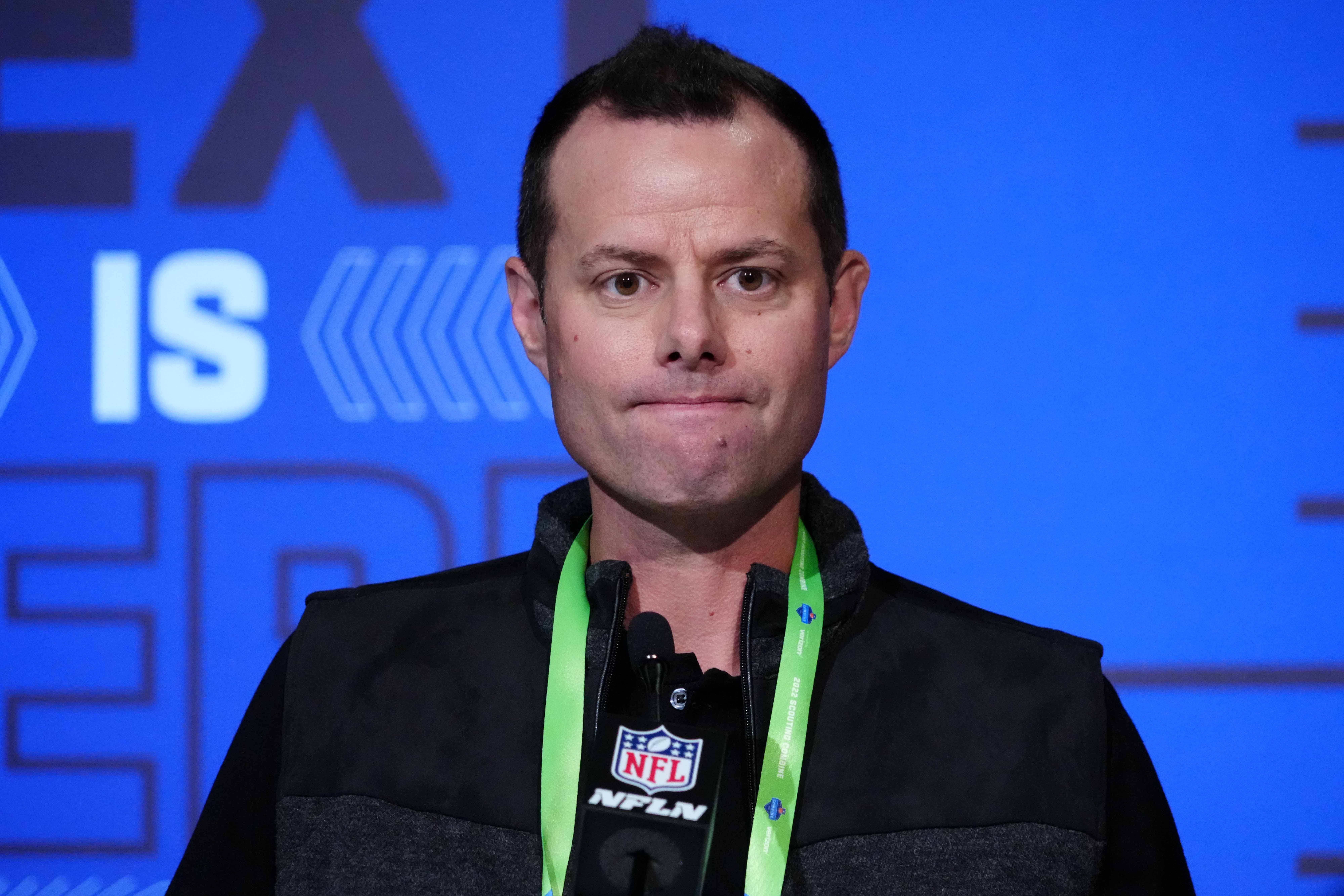 In the first wave of free agency, the Chargers upgraded their roster with the additions of Khalil Mack, J.C. Jackson, Sebastian Joseph-Day, Austin Johnson, and Gerald Everett.

The Bolts still have some spendings to make another signing or two, with $7.9 million in available salary-cap space, according to The Athletic’s Daniel Popper.

If the Chargers nail the draft next month, their odds should improve even more.

The Los Angeles Chargers open as slight favorites over the Las Vegas Raiders in Week 18. 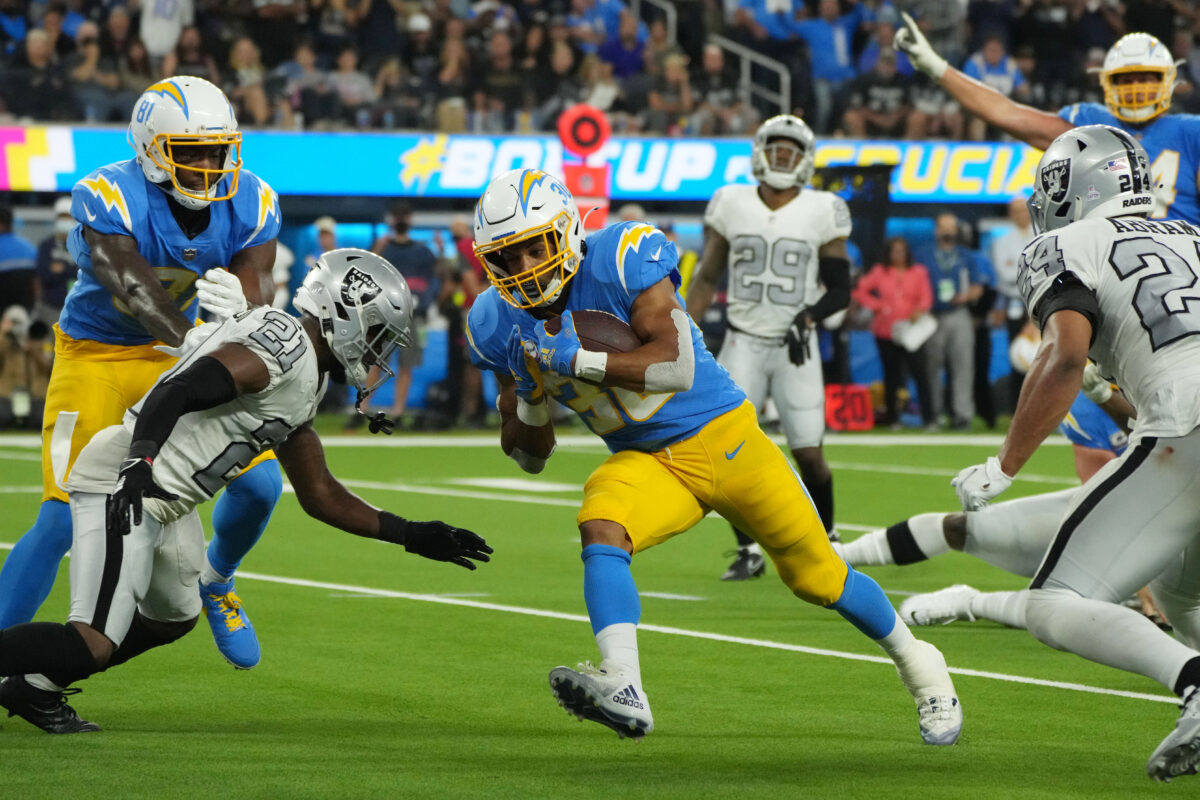 The Los Angeles Chargers (9-7) are currently 2.5-point favorites over the Las Vegas Raiders (9-7) heading into the last game of the season, as both teams are vying for a trip to the playoffs.

The over/under is set at 48.5, per Tipico Sportsbook.

The Chargers most recently won against the Broncos, 34-13.

It was a collaborative effort in all three phases. However, Justin Herbert putting his name into the Chargers record book was the most notable highlight, as he surpassed Philip Rivers for the most passing touchdowns in a single season with 35.

On the other hand, the Raiders beat the Colts, 23-20. Las Vegas got off to a hot start, but the Colts managed to keep things tight, taking the lead before the offense and special teams of the Raiders ultimately decided the fate of the Colts, as Daniel Carlson hit the walk-off field goal.

Los Angeles last met with Las Vegas back in Week 4 on “Monday Night Football,” and it was the Bolts who came out on top at SoFi Stadium, 28-14.

Sunday’s contest will now begin at 5:20 p.m. PT and be televised on NBC.

The odds favor the Chargers even more, as they begin to get key players back. 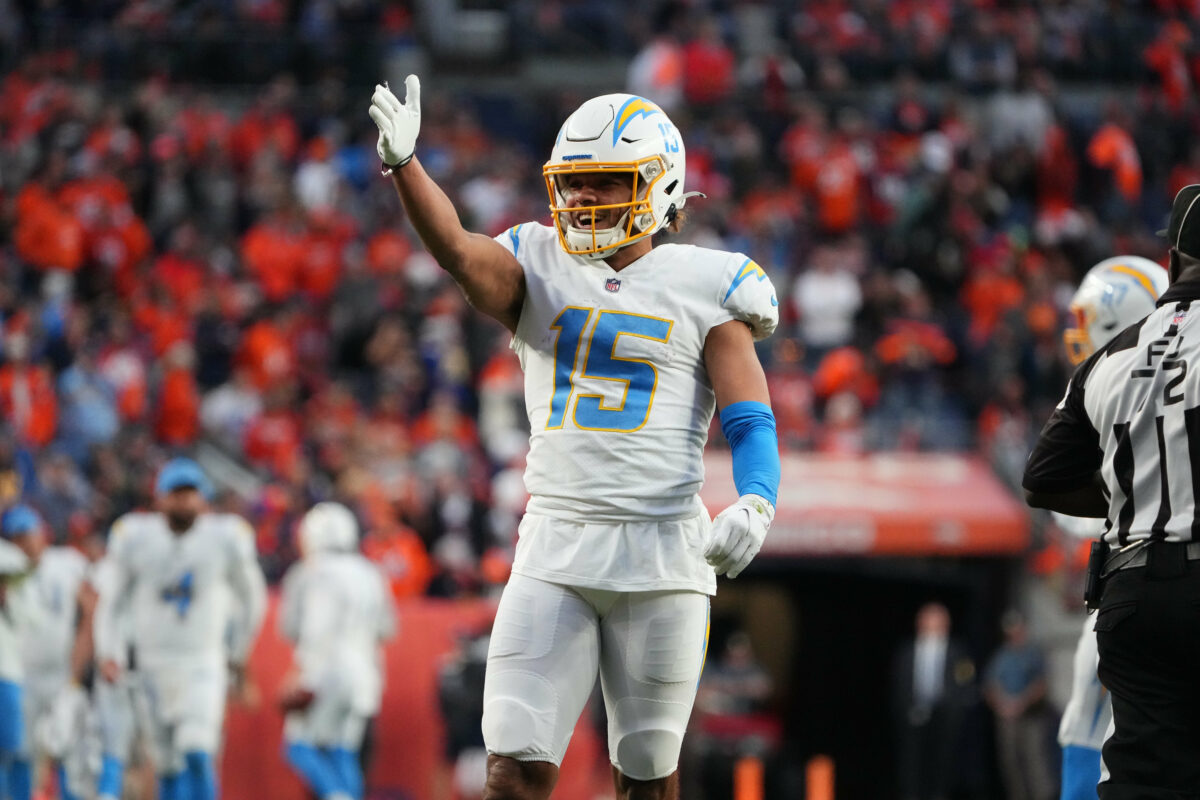 The Chargers are now bigger favorites over the Broncos than when the week opened ahead of the matchup at SoFi Stadium.

As Los Angeles opened the week as 5.5-point favorites, the spread moved more into its favor as the week has gone on.

It could be because the Bolts are getting key players back from the COVID-19 list, like Joey Bosa, Corey Linsley, Austin Ekeler, and Justin Jones.

Here are the updated betting odds for the matchup entering the weekend, per Tipico Sportsbook:

Nonetheless, despite the Chargers being heavy favorites, they can not overlook the Broncos. One, Denver beat them earlier this season, 28-13. Two, Los Angeles just suffered defeat to a Texans team that they should have beat.

The Los Angeles Chargers open as underdogs to the Kansas City Chiefs in Week 15. 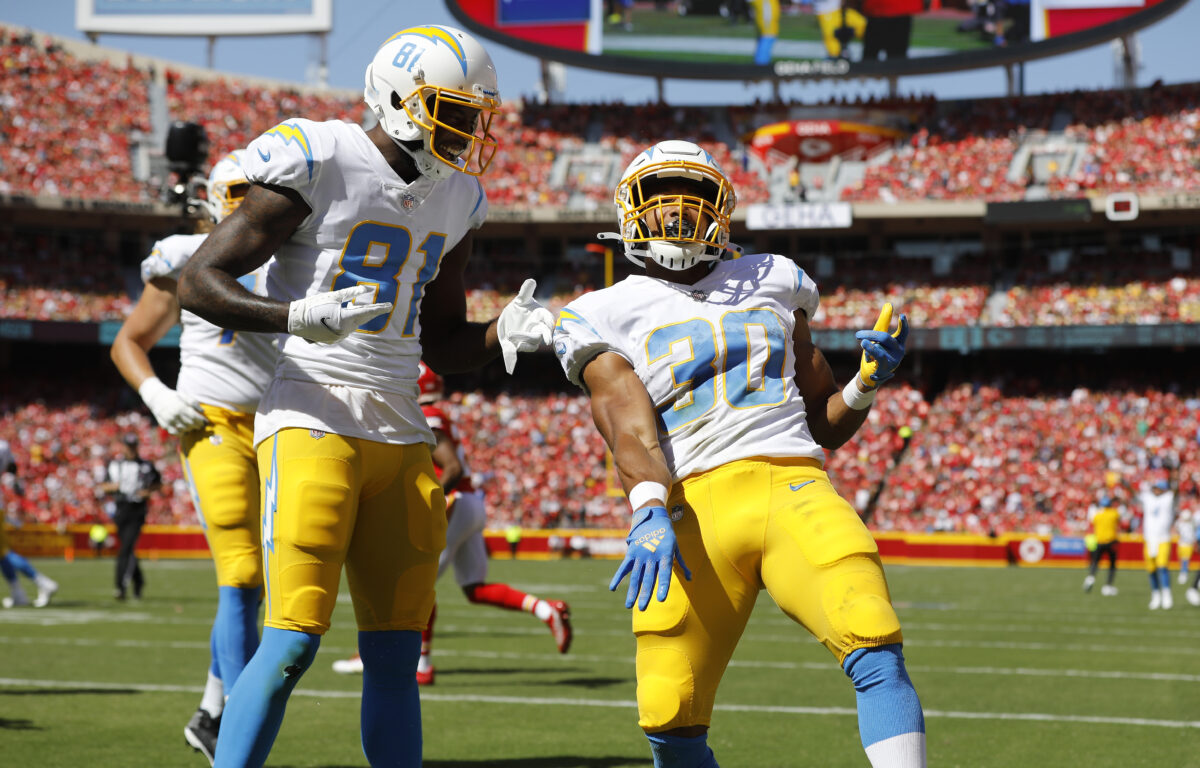 The Los Angeles Chargers (8-5) are currently 3.5-point underdogs to the Kansas City Chiefs (9-4) heading into Week 15.

The over/under is set at 50.5, per Tipico Sportsbook.

The Chargers most recently won against the Giants, 37-21.

It was a collaborative effort on both sides of the ball, all without Derwin James and Keenan Allen. Justin Herbert’s rocket launch of a throw that went for one of three of his touchdowns was the primary highlight.

On the other hand, the Chiefs stomped on the Raiders, 48-9. It was a balanced approach on the offensive side of the ball, and the defense was responsible for five takeaways.

Los Angeles most recently met with Kansas City back in Week 3, and it was the Bolts who came out on top in front of the many Chiefs’ fans in Arrowhead Stadium.

Thursday’s contest will begin at 5:20 p.m. PT and be televised on FOX.

The Los Angeles Chargers open as heavy favorites over the New York Giants in Week 14. 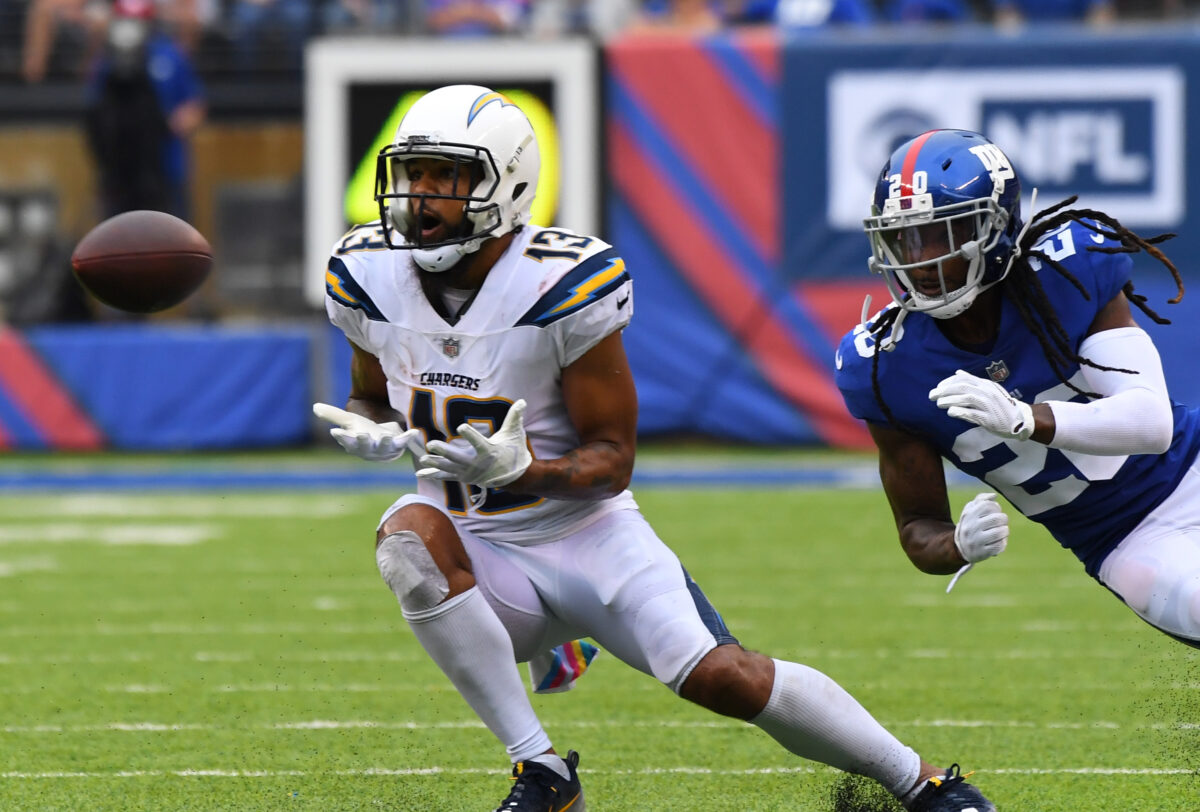 The Los Angeles Chargers (7-5) are currently 9.5-point favorites over the New York Giants (4-8) heading into Week 14.

The over/under is set at 43.5, per Tipico Sportsbook.

The Chargers most recently picked up a win on the road over the Bengals, 41-22.

After taking a 24-0 lead, Los Angeles surrendered a 22-0 run to make it a tight game. But the Bolts were able to close things out in the fourth quarter after dominating on defense and putting up 17 unanswered points.

On the other hand, the Giants fell to the Dolphins by the score of 20-9.

Without Daniel Jones, New York struggled to produce offensively. The defense did all it could through three quarters, but a Miami touchdown in the final quarter decided the fate of the Giants.

Sunday’s contest will begin at 1:05 p.m. PT and be televised on CBS.

The Los Angeles Chargers open as slight favorites over the Philadelphia Eagles. 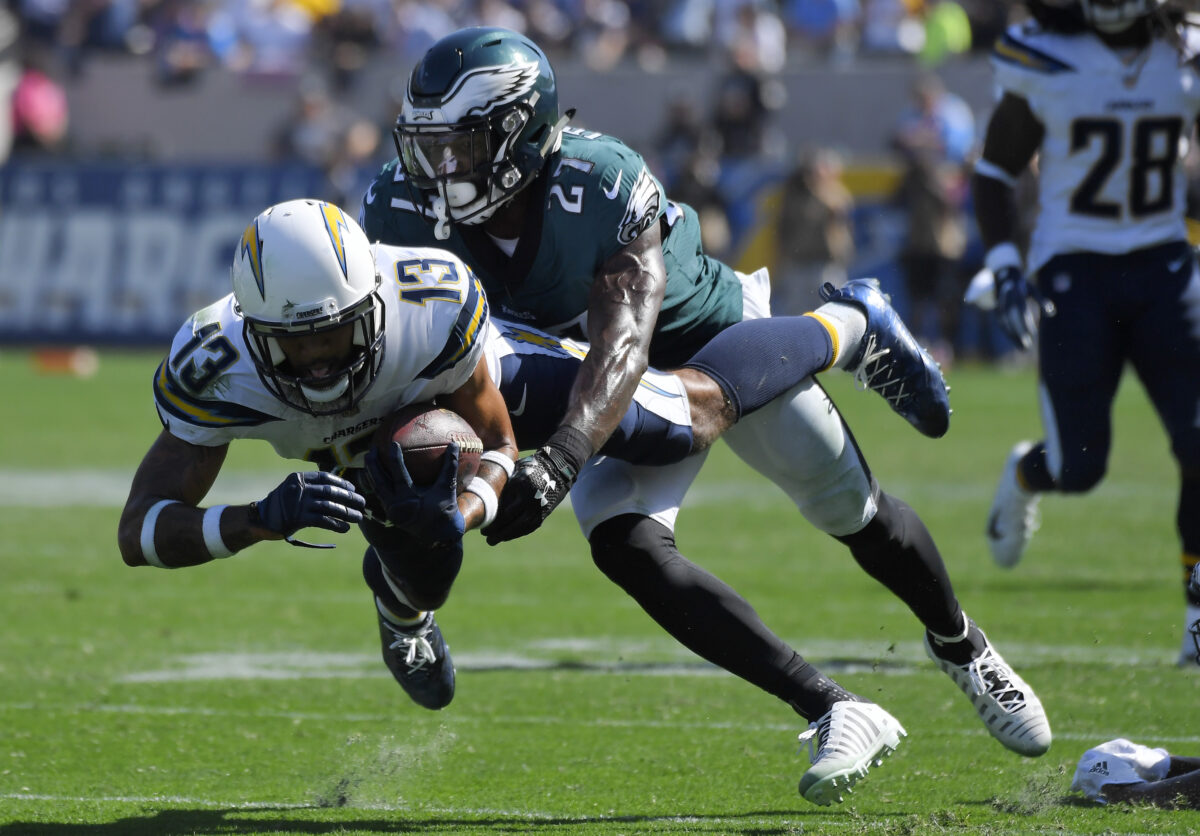 The Los Angeles Chargers (4-3) are currently 2.5-point favorites over the Philadelphia Eagles (3-5) heading into Week 9 of the regular season. The over/under is set at 49.5, per Tipico Sportsbook.

The Chargers most recently fell to the Patriots by the score of 27-24.

After trading touchdowns early on, the same ongoing mistakes continued to bite the Bolts. Those were lack of early-down execution, the run defense, punt coverage unit, dropped passes, and penalties.

Furthermore, quarterback Justin Herbert was not at his best for the second straight week, as he was held a completion percentage of nearly 50 and was picked off twice.

The Eagles, on the other hand, had a field day against the Lions. Their victory was highlighted by a dominant run game, which included 235 yards and four touchdowns. In addition, Philadelphia’s defense forced a turnover on top of sacking Jared Goff six times and hitting him on 11 occasions.

Sunday’s contest between Los Angeles and Philadelphia will begin at 2:05 p.m. PT and be televised on CBS.

The Los Angeles Chargers open as favorites over the New England Patriots. 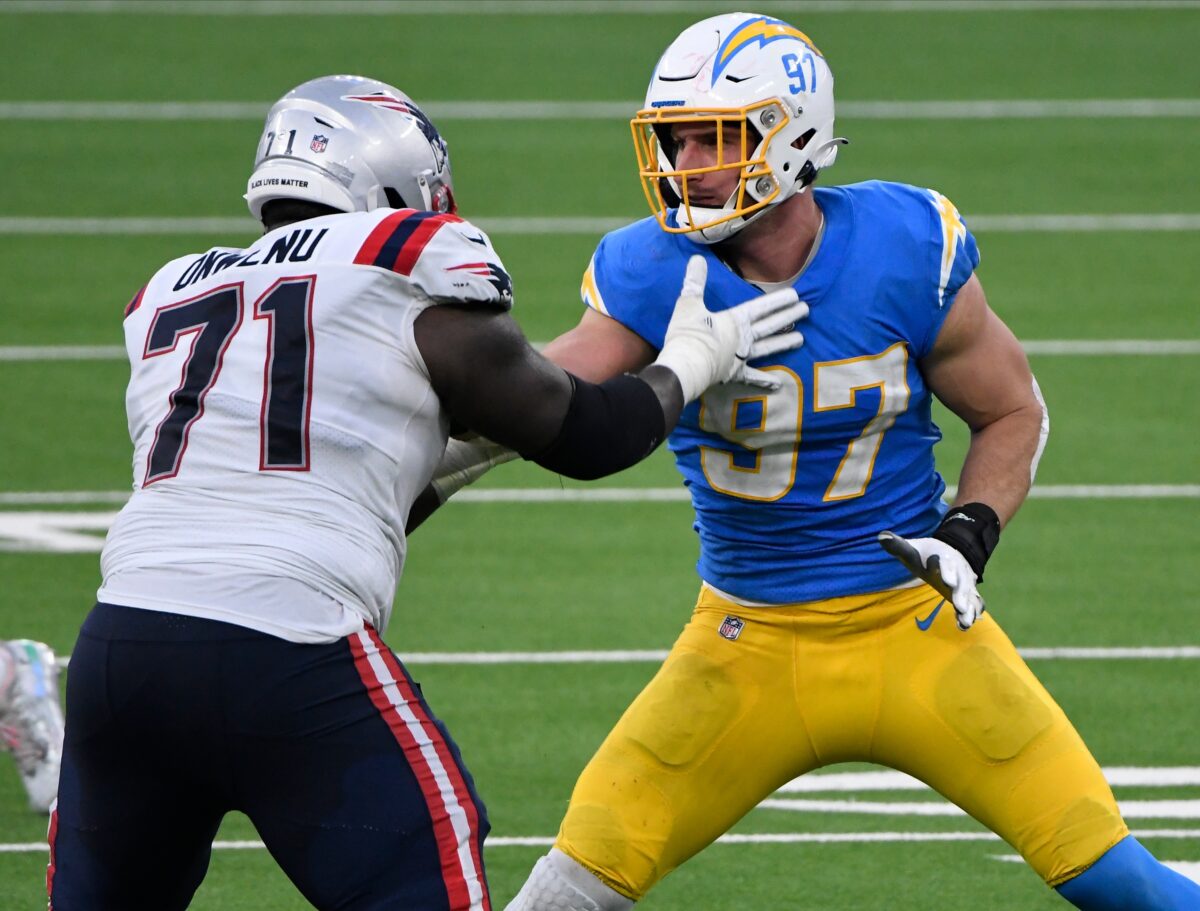 The Los Angeles Chargers (4-2) are currently 5.5-point favorites over the New England Patriots (3-4) heading into Week 8 of the regular season. The over/under is set at 48.5, per Tipico Sportsbook.

The Chargers are coming off their bye week. But prior to that, Los Angeles was a victim of a total beatdown by the Ravens, 34-6.

Quarterback Justin Herbert was held to just 22 of 39 passing for 195 yards, a touchdown, and an interception. Defensively, the Bolts could not stop the Ravens rushing attack, allowing 189 yards and three touchdowns on the ground.

The last time Los Angeles and New England met was last season. It was then when head coach Bill Belichick drew up the perfect game plan to force Herbert into the worst performance of his career. The result was a 45-0 win for the Patriots.

Sunday’s contest between the Chargers and Patriots will begin at 1:05 p.m. PT and be televised on CBS.

The Los Angeles Chargers open as underdogs to the Baltimore Ravens. 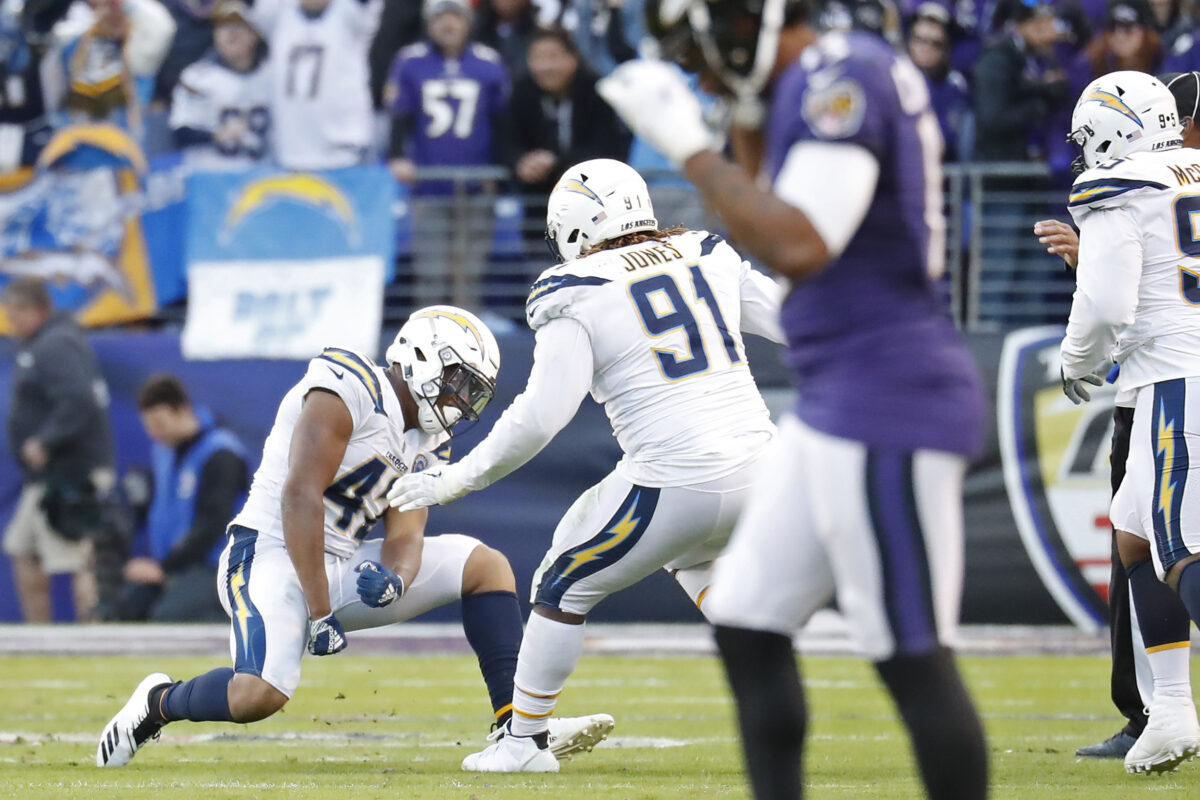 The Los Angeles Chargers (4-1) are currently 3.5-point underdogs to the Baltimore Ravens (4-1) heading into Week 6 of the regular season. The over/under is set at 51.5, per Tipico Sportsbook.

The Chargers most recently knocked off the Browns in a thrilling battle by the score of 47-42.

Meanwhile, the Ravens had a wild win of their own, as the team rallied from a 16-point deficit in the fourth quarter to win the contest in overtime. QB Lamar Jackson had 442 passing yards — 355 of which came after halftime and four touchdowns.

The last time these two teams met was back in 2019 in an AFC Wild Card matchup, where the Chargers defeated the Ravens 23-17 on the road.

Sunday’s contest between Los Angeles and Baltimore will begin at 10:00 a.m. PT and be televised on CBS.

Brandon Staley has established himself as everyone’s favorite head coach. 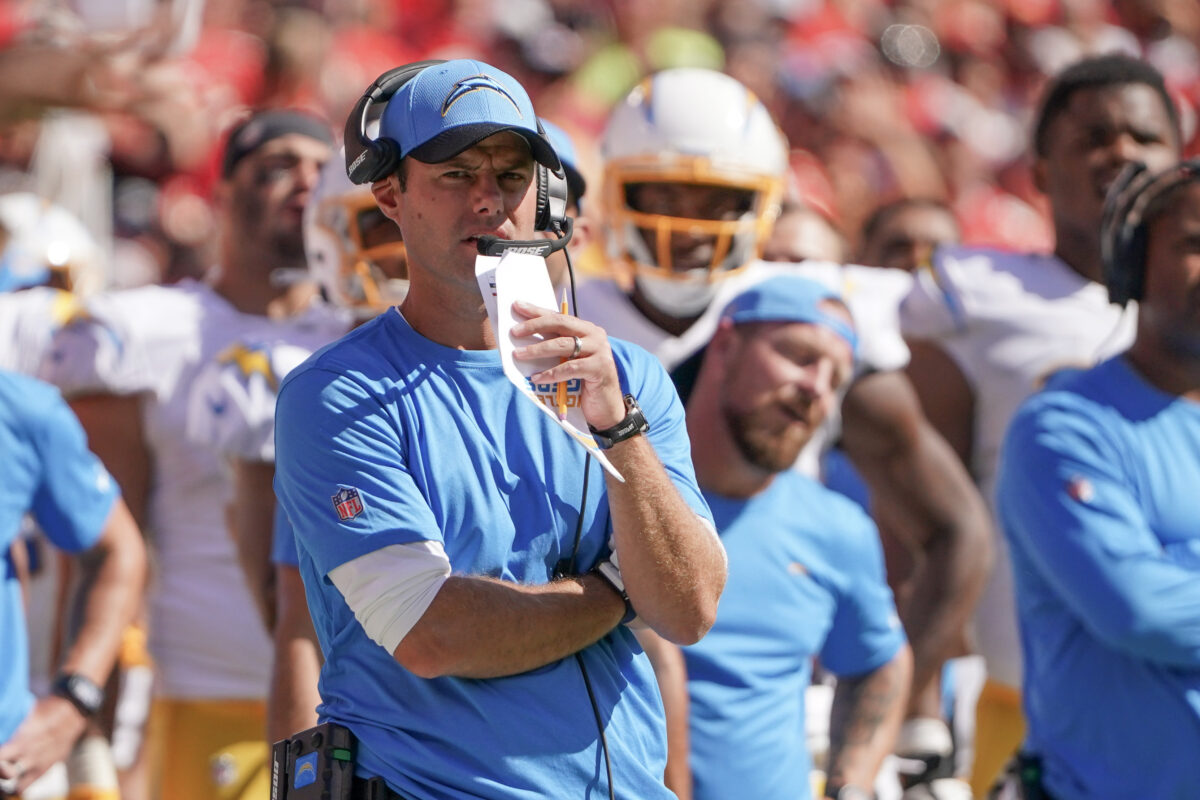 Entering the 2021 season, even before making his coaching debut, Brandon Staley was highly regarded by many.

He was tied for the second-best odds to win Coach of the Year with a handful of others. But now, Staley is the favorite to win the prestigious award at +600 following the Chargers’ win over the Raiders, per Tipico Sportsbook.

The 38-year-old head coach embraces analytics, but at the same time, uses his brilliant football mind to create a perfect blend, which has all translated to the football field.

Not only has the team been firing on all cylinders on both sides of the ball, but Staley also has significantly improved areas that cost the team a lot of close games in seasons prior, such as game management and strategy in crucial situations with an aggressive, effective, and efficient approach.

Those in the front office, coaches, and players on the team are completely bought into what Staley has done thus far, including quarterback Justin Herbert, who believes the first-year head coach is creating a winning culture for the franchise.

“I think he believes in our offense just like we believe in each other,” Herbert said. “But being aggressive and using some of the data to our advantage is the best of both worlds. I think Coach Staley has done a great job communicating with us.”

Staley was hired in January by the Chargers after overseeing the Rams defense, which was the top-ranked unit in 2020.

Before he was a defensive coordinator, Staley’s career in the NFL started in 2017 with the Bears as an outside linebackers coach. He then went from the Broncos to hold the same role in 2019.

The Los Angeles Chargers open as slight favorites over the Cleveland Browns. 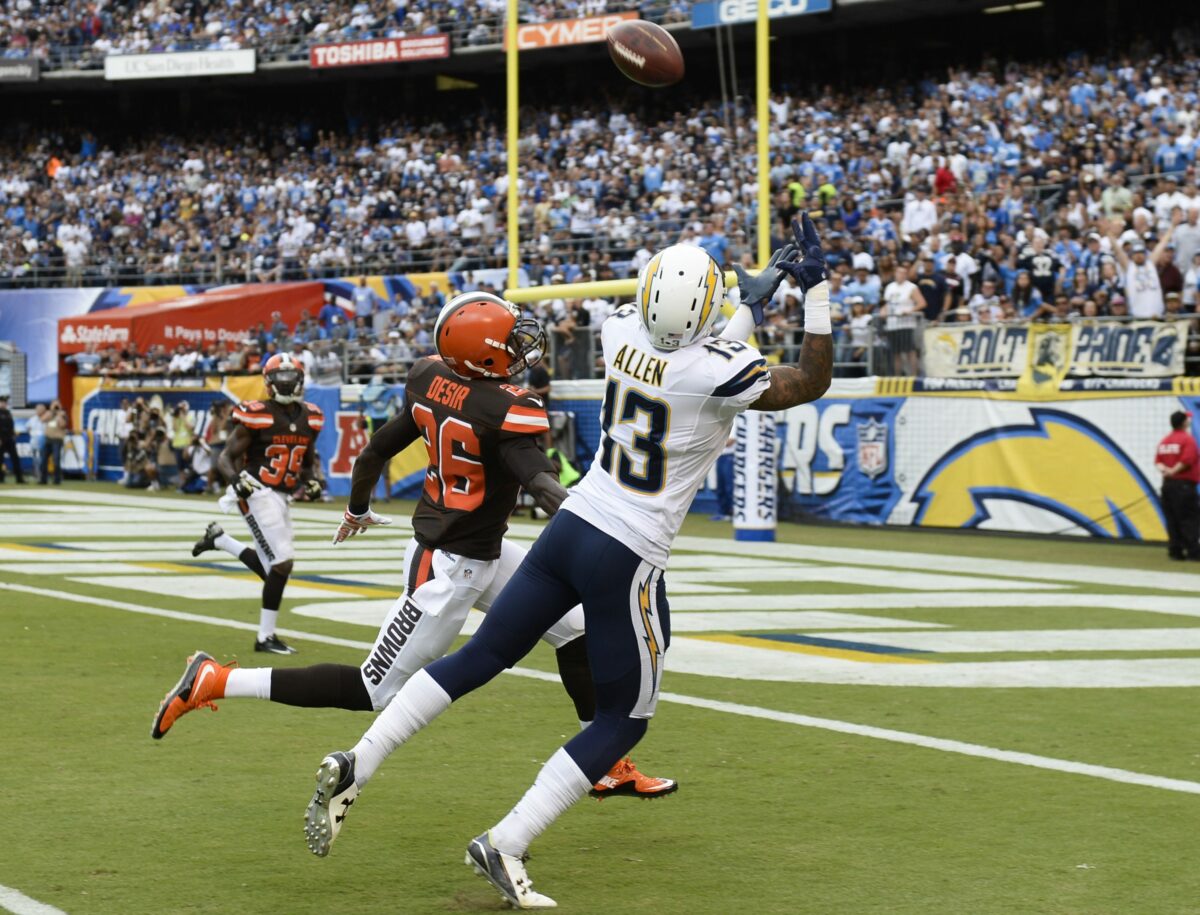 The Los Angeles Chargers (3-1) are currently 2.5-point favorites over the Cleveland Browns (3-1) heading into Week 5 of the regular season. The over/under is set at 46.5, per Tipico Sportsbook.

The Chargers most recently knocked off the Raiders on Monday night by the score of 28-14 to take the division lead.

After three passing touchdowns from Justin Herbert in the first half, Las Vegas pulled within to make it a one-score game in the third quarter. That would be the last time the Raiders found the end zone after the Chargers picked up steam on defense to contain them the rest of the way out.

Cleveland, on the other hand, held off the Vikings in a low-scoring affair. While quarterback Baker Mayfield struggled to get into a rhythm, the Browns were able to pull away behind a suffocating defensive effort and remarkable running game.

Sunday’s contest between the Chargers and Browns will begin at 1:05 p.m. PT and be televised on CBS.