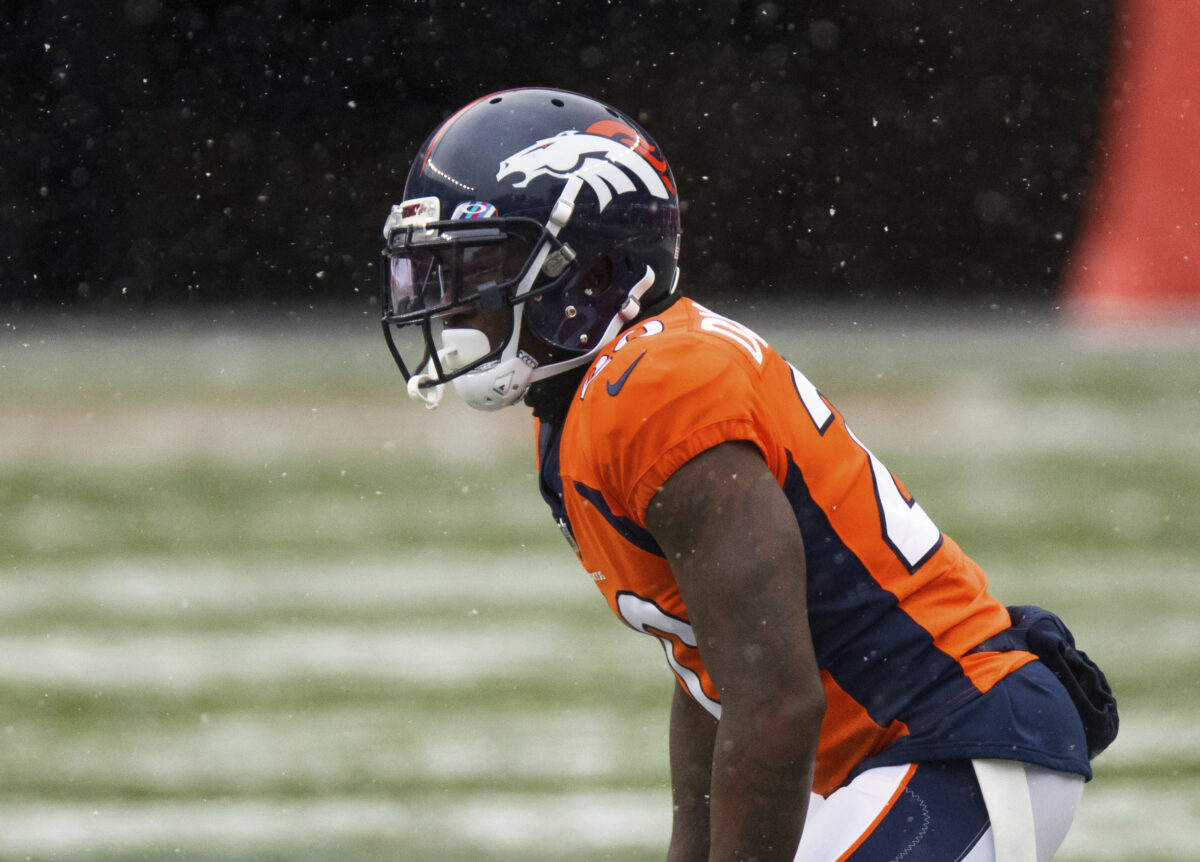 After their 2021 season ended, the Denver Broncos signed six practice squad players to future contracts, giving those players a chance to compete for a roster spot during training camp in 2022.

Denver later signed another defensive lineman and a pass rusher from the CFL to future deals, bringing their future contracts total to eight players. Those players will be added to the team’s 90-man offseason roster when the new league year begins in March.

Those eight players will be joined in free agency by OLB Pita Taumoepenu, DE Carlo Kemp and DT Deyon Sizer, who were released from Denver’s practice squad earlier this month.

If the Seahawks fire DC Ken Norton Jr., Broncos DC Ed Donatell is expected to be a candidate to replace him. 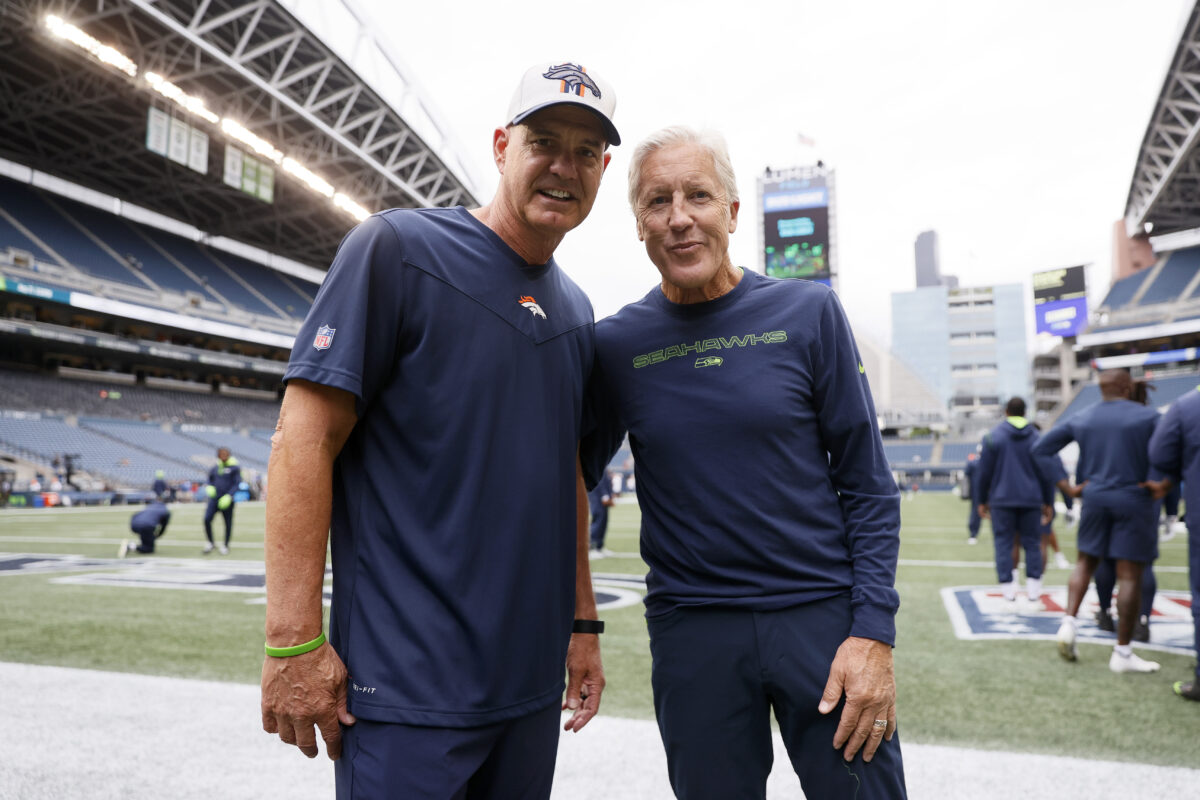 Ed Donatell is “on the shortlist of candidates” to replace Norton in Seattle, according to a report from Bob Condotta and Adam Jude of the Seattle Times. Donatell’s defense allowed the third-fewest points in the NFL in 2021.

Donatell is still under contract with the Broncos, but after firing head coach Vic Fangio, Denver will allow the next coach to pick his staff. In the meantime, assistant coaches like Donatell have permission to consider other opportunities.

During the broadcast, Peyton Manning called Von Miller the best athlete he’s ever played with. 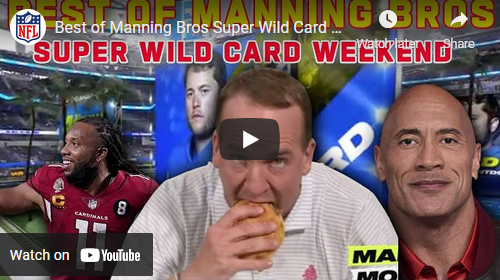 Peyton and Eli Manning were back on ESPN2 for another alternate broadcast of “Monday Night Football” in the wild-card round of the NFL playoffs on Jan. 17. Highlights from the broadcast can be seen in the above video, courtesy of the NFL’s YouTube page.

The Los Angeles Rams defeated the Arizona Cardinals 34-11 on Monday in a game that featured a dominant defensive performance from Rams outside linebacker Von Miller. During the broadcast, Peyton called Miller the best athlete he ever played with, recalling times when the pass rusher would line up against wide receivers for one-on-one coverage drills at practice.

After calling the Rams-Cards game, the Manning brothers are now done commentating for the 2021 season. There’s good news, though, as Peyton and Eli are under contract with ESPN to return for the 2022 and 2023 seasons.

Von Miller totaled 2.5 sacks the last time he faced Tom Brady in the playoffs. He has sacked Brady 7.5 times in his career. 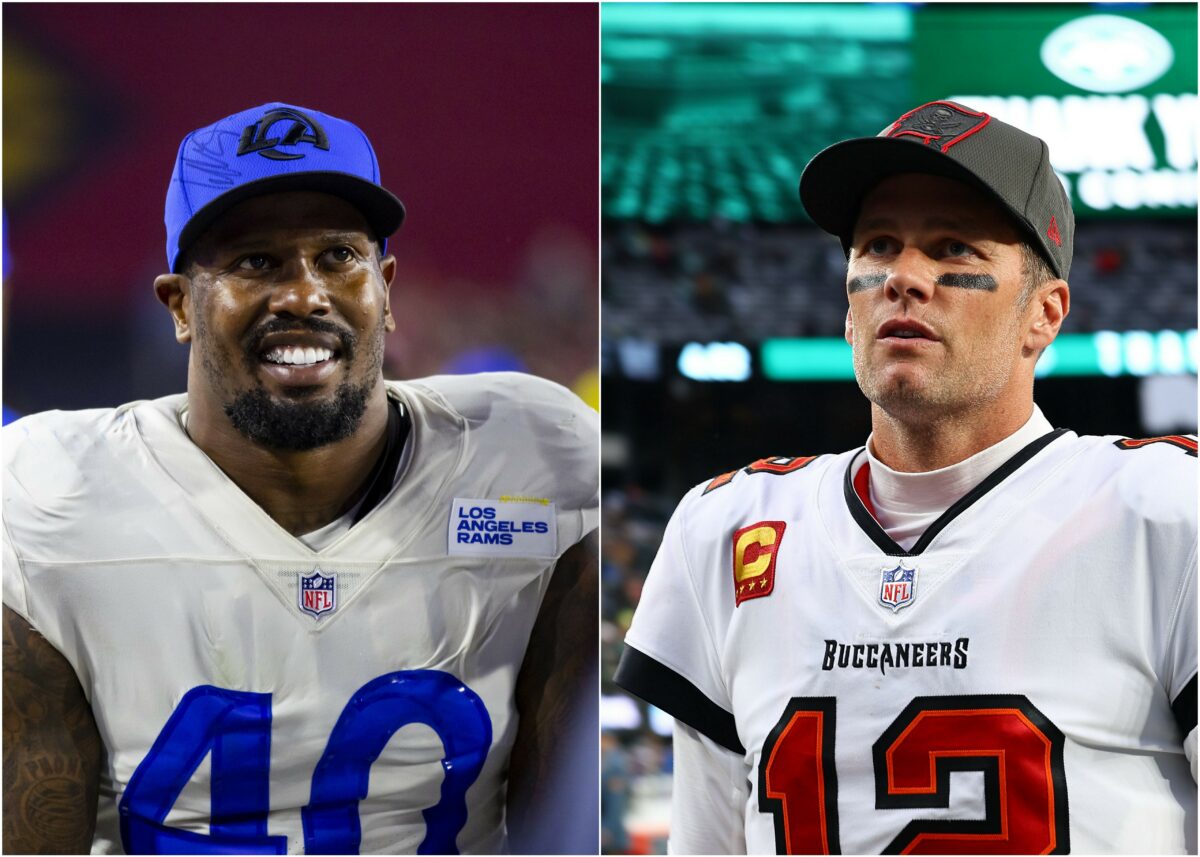 Playing in his first postseason game since Super Bowl 50, Los Angeles Rams outside linebacker Von Miller led the team with six tackles and recorded a sack in a 34-11 win over the Arizona Cardinals on Monday evening.

On Monday’s “ManningCast” on ESPN2, former NFL quarterback Peyton Manning said Miller was the best athlete he ever played with. Miller showed off his athleticism on Monday, dipping below and running around and through offensive linemen while totaling three tackles behind the line of scrimmage in the big win.

Miller and the Rams will now advance to the divisional round of the NFL playoffs in the NFC’s bracket to face the Tampa Bay Buccaneers and quarterback Tom Brady on the road. Miller and Brady have an on-field rivalry that dates back to when Miller played for the Denver Broncos and Brady played for the New England Patriots.

Brady called Miller “one of the all-time greats” when the Broncos traded the pass rusher to the Rams mid-season. Their mutual respect and playful online jabs make the Brady-Miller rivalry one one of the best QB vs. defender matchups in the NFL.

Brady and Miller have met in the playoffs twice in the past, most recently in a 20-18 Broncos win over the Patriots in the 2015 AFC championship game. Miller recorded 2.5 sacks the last time he faced Brady in the postseason, and he’s sacked the QB 7.5 times overall in his career.

After rolling over their unused cap space from 2021, the Broncos are expected to have around $50M in cap space this offseason. 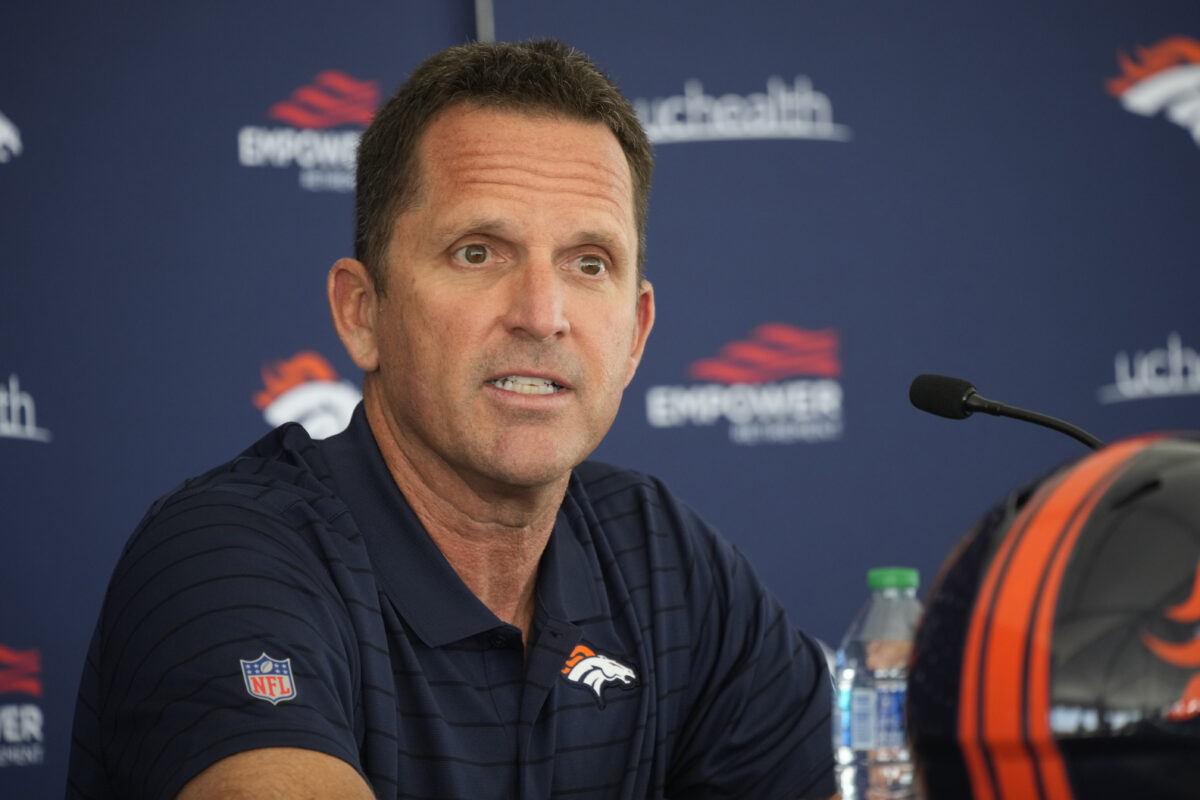 The Denver Broncos have $11,282,344 worth of unused salary cap space from the 2021 NFL season, according to ESPN’s Field Yates.

The Broncos’ official rollover number won’t be finalized until after the NFL audits each team’s books, but it will likely be pretty close to $11 million.

With the team’s $11 million-plus rolling over from this past season, the Broncos are currently estimated to have about $47,683,840 in salary cap space this offseason. Again, that’s not an official or final number, but the team’s cap total should be in that ballpark.

Denver already created some extra cap room by restructuring the contract of guard Graham Glasgow, and more cap-related moves could be on the way. The new league year — and NFL free agency — will begin on March 16.

John Elway confirmed his interest in owning part of the Broncos in an interview with 9News.

The Denver Broncos are expected to go up for sale this offseason, and two former quarterbacks are interested in joining a potential new ownership group.

There have been rumors for several months that both John Elway and Peyton Manning have interest in becoming minority owners. Manning downplayed that possibility in November, but Elway publicly acknowledged his interest in a recent interview with KUSA-TV’s Mike Klis.

“I do have interest in being a part of it,’’ Elway told Klis.

As a potential minority owner, Elway would welcome an advisor role.

“I’m not looking to be the face of the franchise,’’ Elway said. “Whoever puts up that kind of money and whoever is that owner, it’s their franchise. It’s their team. My hope would be to help support the new owner.”

Elway won two Super Bowls as a quarterback with the Broncos during his playing days before later returning to the team as an executive. He served as a general manager for 10 years, winning a third Super Bowl in 2015.

Elway stepped down from his GM duties last year but he will remain the president of football operations until his contract expires later this offseason. Elway would like to remain part of the team going forward, and joining a potential new ownership group would allow him to do so.

Meanwhile, Manning has not yet announced his potential interest, but Klis reported Monday that the ex-QB is “listening to prospective investors” who have reached out to him. Joe Ellis, the team’s president/CEO, is expected to announce a transition toward a sale after Denver hires a new head coach.

Dan Quinn is the favorite to replace Vic Fangio in Denver, according to NFL Network. 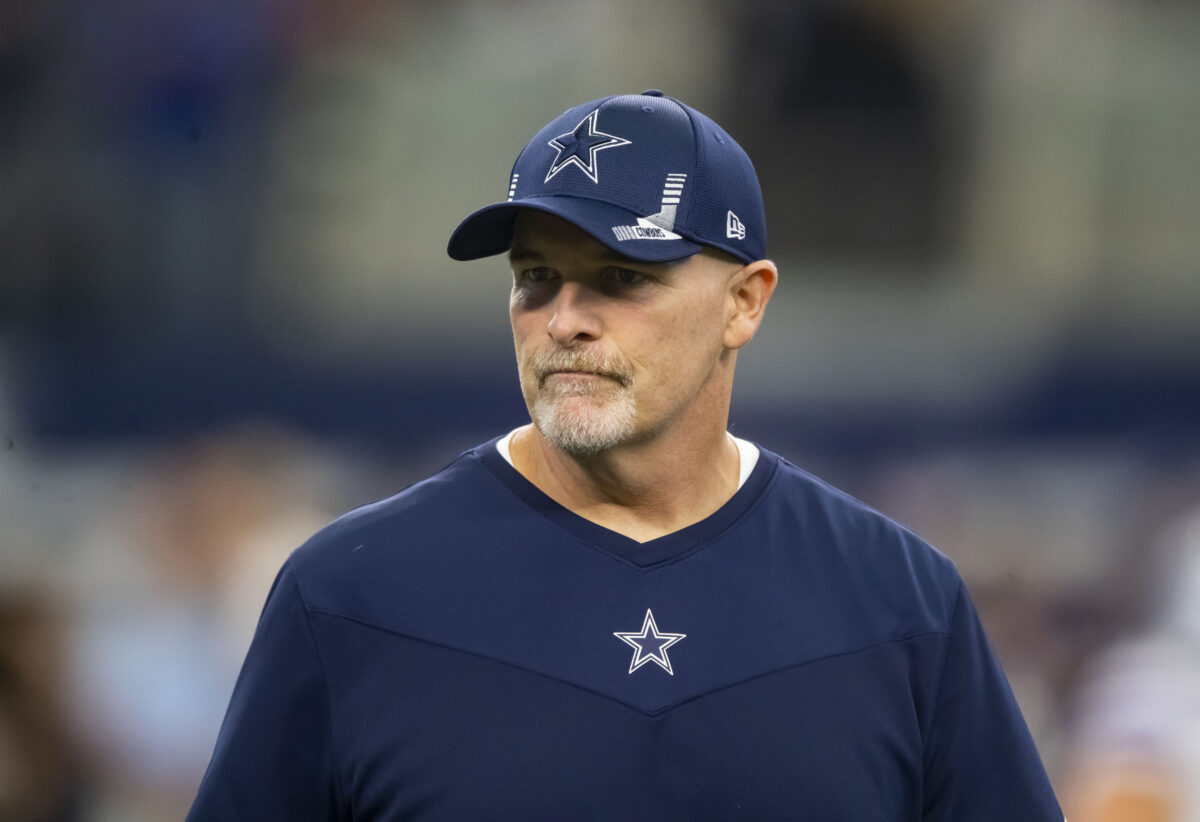 NFL Network’s Tom Pelissero reiterated that notion over the weekend.

“Quinn remains the favorite to be Denver’s next head coach,” Pelissero reported on Saturday. “He is a culture-builder [who] took the Falcons to the Super Bowl in his second season there [and he] also has worked previously with [Broncos] general manager George Paton.”

Following the Cowboys’ 23-17 loss to the San Francisco 49ers in the wild-card round of the NFL playoffs on Sunday, Quinn is now available to join another team as early as this week.

Denver isn’t the only team interested in Quinn — he will interview with the Broncos on Tuesday and then meet with three other teams later in the week, according to a report from NFL Network’s Ian Rapoport.

Quinn is just one of 10 candidates Paton plans to interview, but it seems clear that he is already considered the front runner for Denver’s opening.

Seahawks QB Russell Wilson wants to “explore his options” this offseason, according to NFL Network. 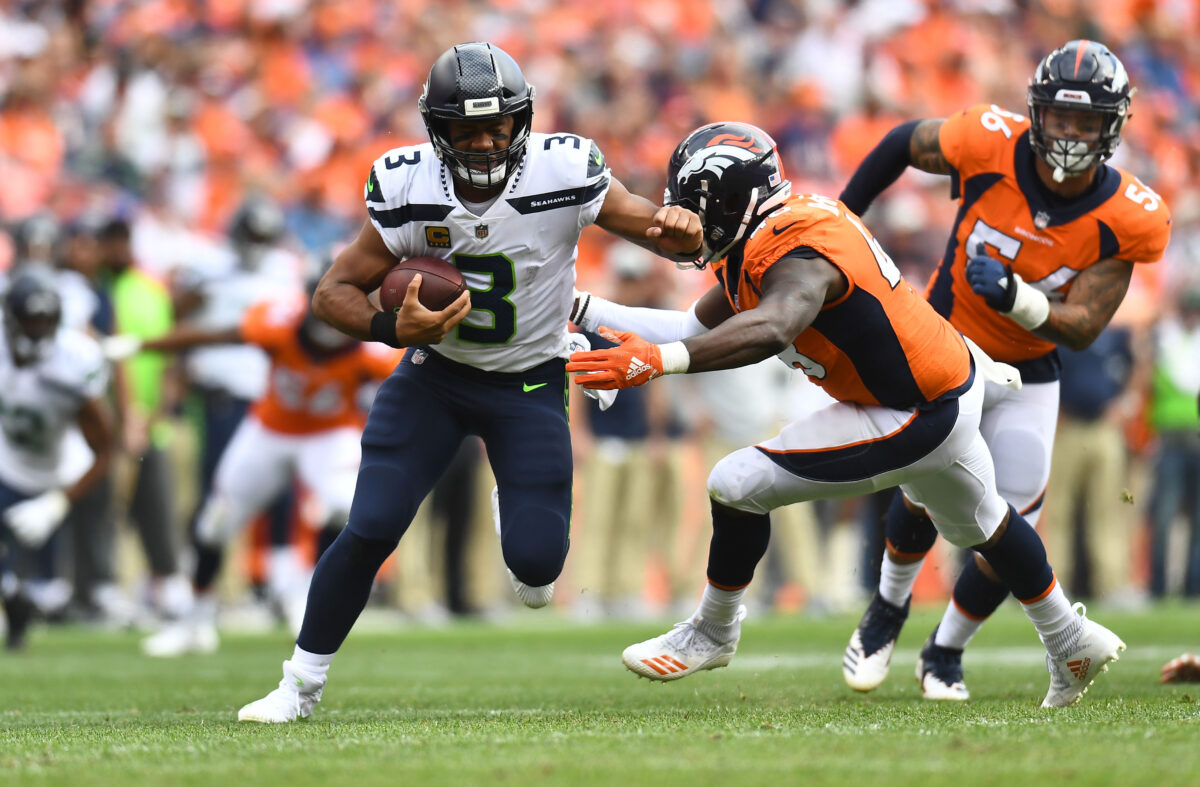 Seattle Seahawks quarterback Russell Wilson wants to “explore his options” this offseason, according to a report from NFL Network’s Ian Rapoport (via Seahawks Wire).

Rapoport clarified that Wilson has not demanded a trade, but the veteran QB “wants to investigate other destinations.” The Seahawks have said they do not plan to trade Wilson, so the QB might have to force his way out if he ultimately decides to pursue another opportunity.

Wilson has a no-trade clause in his contract, so he would have to sign off on any potential trade, essentially allowing him to pick his team if a trade does happen.

Last year, the Denver Broncos were not on Wilson’s list of preferred trade destinations, but it’s unclear if his feelings about the team are still the same.

After trading away Von Miller, the Broncos would presumably have enough draft capital to pull off such a trade. Denver has 11 picks this year, including ninth overall and five selections in the first three rounds.

The Broncos will also have around $50 million in salary cap space, so they would be able to afford Wilson’s contract if he agreed to a Denver trade.

If Wilson eventually hits the trade block later this offseason, the Broncos should be among his suitors.

The final ManningCast guests of the 2021 season: Larry Fitzgerald, Dwayne “The Rock” Johnson and Russell Wilson. 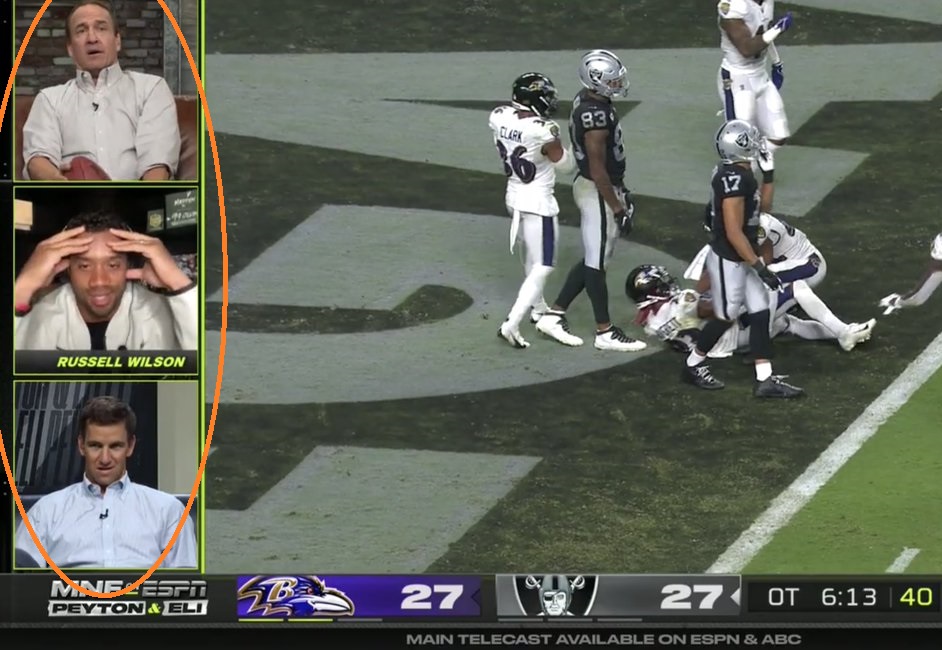 The Los Angeles Rams will host the Arizona Cardinals in a “Monday Night Football” showdown to wrap up the wild-card round of the NFL playoffs this evening.

The game will be broadcast in English on both ESPN and ABC with a Spanish broadcast on ESPN Deportes. Fans can also stream the game with fuboTV (free 7-day trial).

For the final time this season, there will also be an alternate “MNF” broadcast featuring brothers Peyton and Eli Manning. The “ManningCast” will air on ESPN2 and will be available to stream on ESPN+ (and fuboTV).

Wilson was also a guest earlier this season and he was a big hit among fans and pundits.

Monday’s game will also feature Rams outside linebacker Von Miller, who won Super Bowl 50 with Peyton and the Denver Broncos in 2015. Kickoff is scheduled for 6:15 p.m. MT. 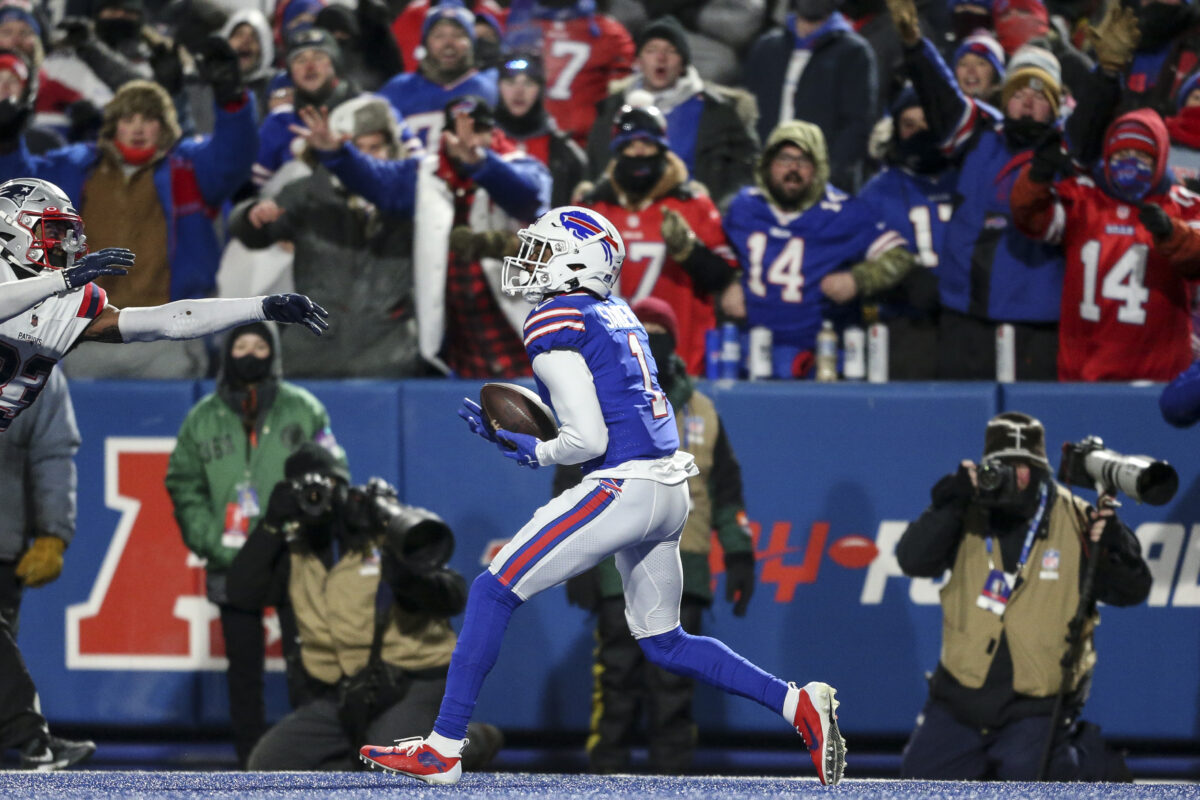 Buffalo Bills wide receiver Emmanuel Sanders wore cleats honoring late teammate Demaryius Thomas in a 47-17 win over the New England Patriots in the wild-card round of the NFL playoffs on Saturday evening.

“Long live DT” was written on the cleats with a photo of Thomas and Sanders from their time with the Denver Broncos.

Sanders and Thomas were teammates in Denver from 2014-2018, forming one of the best wide receiver duos in the NFL. They won Super Bowl 50 together following the 2015 season and earned four combined Pro Bowl selections as teammates.

Sanders caught two passes for 36 yards and a touchdown on Saturday.

Definitely fitting for my guy Emanual Sanders to score so that he could Salute DT!!🙏🏾🥲

Thomas died in Georgia last month. His family believes he died of a seizure. The former receiver was just 33 years old.

Thomas ranks No. 2 in receiving yards and receiving touchdowns on the Broncos’ all-time list, trailing only Rod Smith (11,389; 68).

After defeating the Patriots, Sanders and the Bills will now face the Kansas City Chiefs in the divisional round of the playoffs on Sunday.