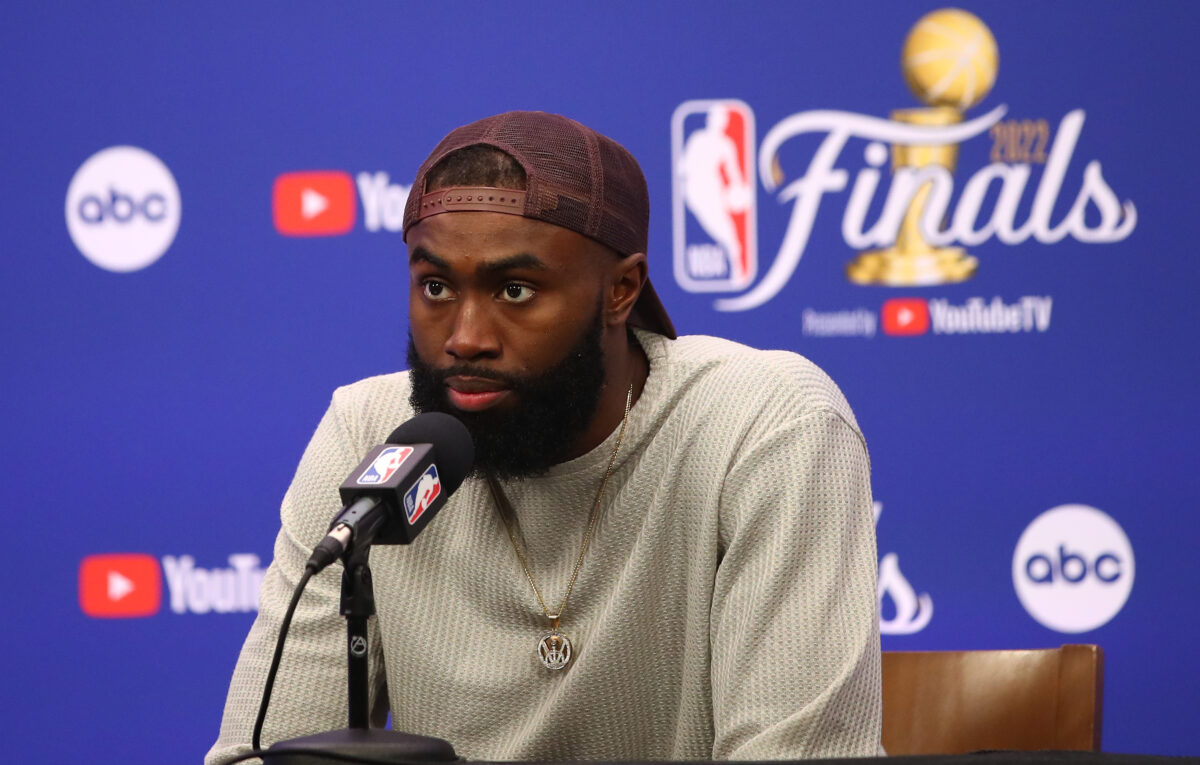 Jaylen Brown played a key role in the Boston Celtics’ first victory of the 2022-23 preseason, an exhibition shellacking of the Charlotte Hornets at home. Brown contributed 24 points in 24 minutes as the Celtics cruised.

Following the lopsided victory, Brown was asked about playing alongside newcomer Malcolm Brogdon. Brogdon is a veteran scorer and leader in the NBA who was traded to the Celtics this offseason. Brown summed up his respect and admiration of his new teammate succinctly.

“Malcolm is really good at basketball.” said the Georgia native a bit wryly after the game.

Brogdon himself was quick to praise his new club. He seemed ready and willing to help the team win. Jaylen Brown made note of this in his own post-game comments.

“He makes the right plays,” Jaylen said of Brogdon. “He’s a threat out there at all times. It’s definitely going to make us better. Overall, he’s more than capable of being a go-to player in this league.”

“For him being able to come in and run things and also get himself going as you’ve seen tonight, he has a well-balanced game.”

Brogdon finished the game with 11 points, five rebounds and nine assists. He led all players in assists and chipped in two 3s to boot.

Malcolm Brogdon on what he learned about the Celtics after Boston’s preseason victory: “It’s a team full of unselfish guys that clearly have an objective to just win.” 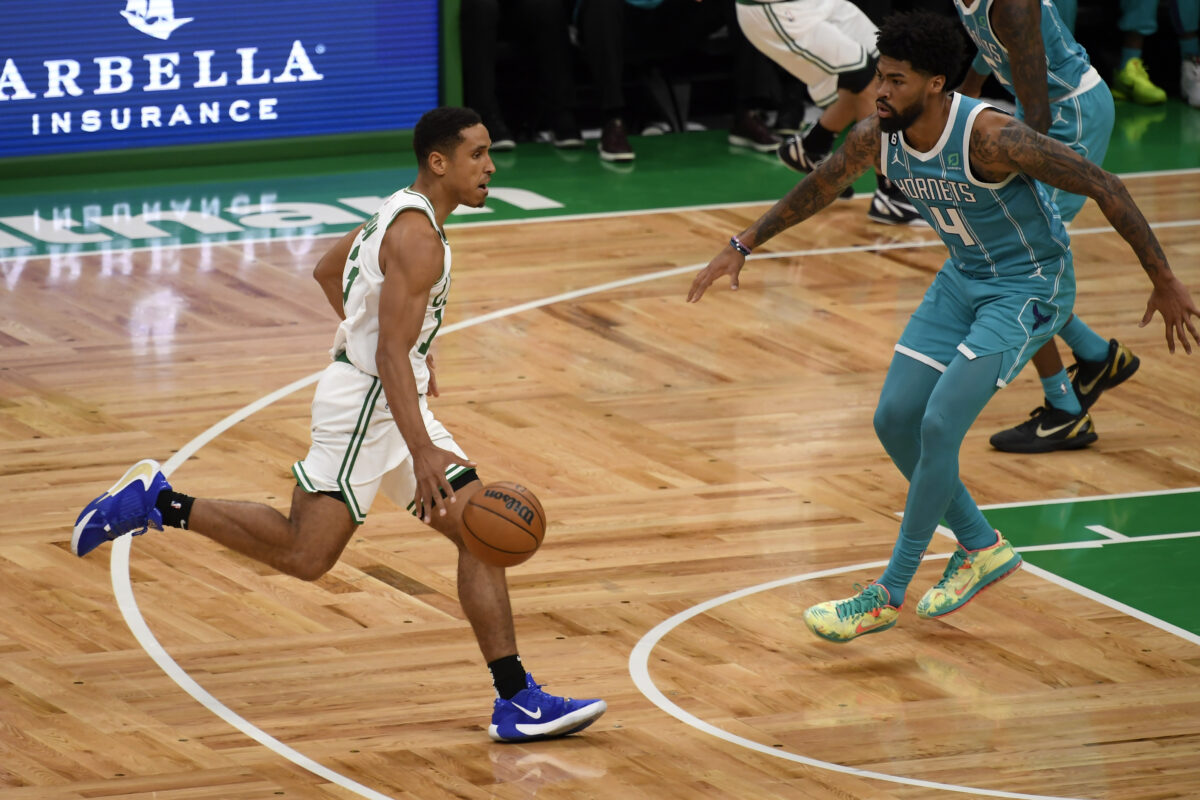 The Boston Celtics made a splash by trading for Malcolm Brogdon in July, adding the former 2017 Rookie of the Year to an already formidable lineup.

Brogdon is playing on what is, perhaps, the most talented roster of his professional career. After Boston’s big preseason victory against the Charlotte Hornets, Brogdon was asked about his impression of the team thus far. His admiration for the organization was clear.

“It’s a team full of unselfish guys that clearly have an objective to just win.” Brogdon said.” We want to win at all this year, so we’re trying to build for that. We’re not really concerned about statistics.”

Brogdon stated he understands his role coming to the Celtics. He smiled as he explained that he is now facing less potent defenders playing alongside Jayson Tatum and Jaylen Brown.

“We know JT and JB are going to lead us every night on the offensive end,” Brogdon said. “And it’s up to the rest of us to play our roles and to support them, and also play to the best of our abilities.”

Brogdon, 29, is one of the elder statesmen in the Celtics locker room. He explained he shares responsibility with Marcus Smart to quarterback the offense. Overall, he sounded ready to support the club in any way necessary. 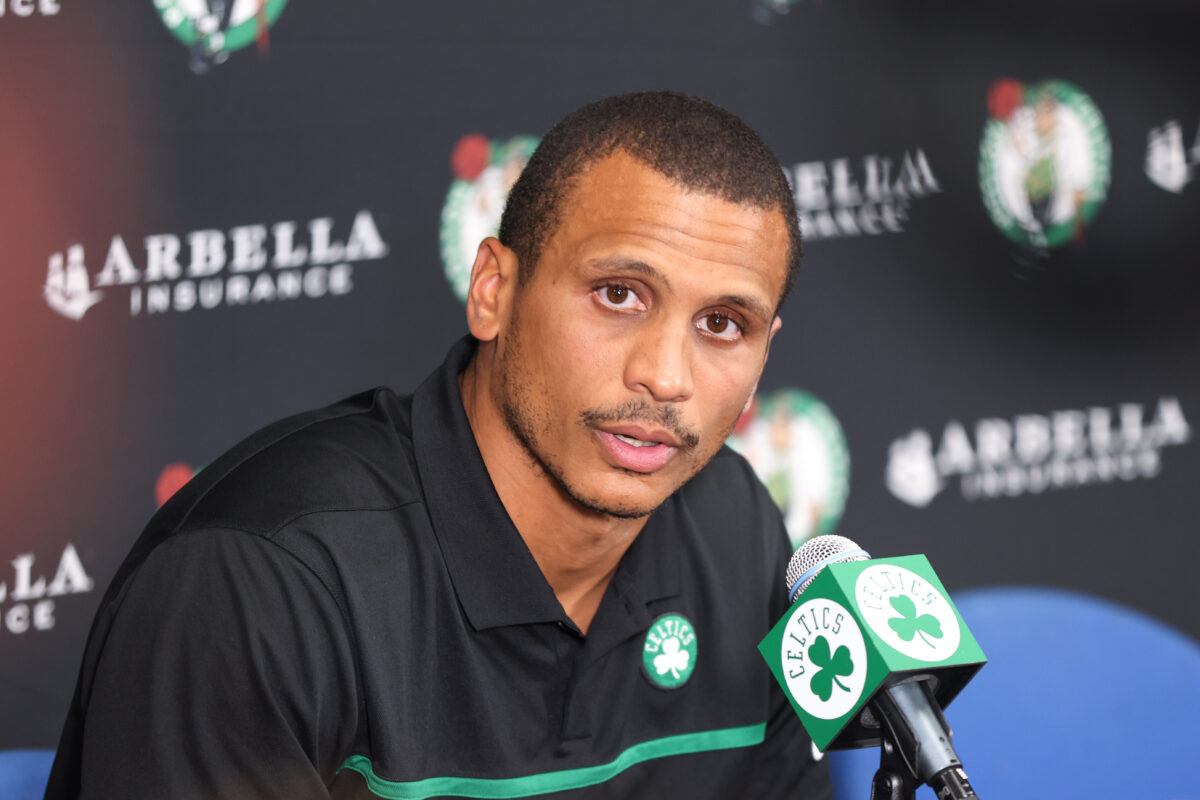 The Boston Celtics grabbed a loud win against the Charlotte Hornets during the team’s preseason opener Sunday afternoon. In the process, they also delivered interim coach Joe Mazzulla his first win as an NBA head coach, although it will not count officially.

In the wire-to-wire win, the Celtics logged 41 assists on 48 made baskets while holding the Hornets to 34.7% shooting for the game. Afterward, Mazzulla spoke about his first victory as a head coach.

“It felt like I was coaching a great team,” Mazzulla said when asked about how it felt to earn a win. “We have a bunch of guys that have the ability to make shots and we really play well together”

Postgame Malcolm Brogdon and Jaylen Brown praised Mazzulla’s calm demeanor. At just 34 years old, Mazzulla is the youngest NBA head coach this season and one of the youngest in league history.

The Boston Celtics begun the 2022-23 preseason with a bang, defeating the Charlotte Hornets ___ at home. The defending eastern conference champions made it look easy, delivering interim coach Joe Mazzulla his first win as an NBA head coach.

Boston is running it back with the same core, so what we can learn from the preseason is limited. At the same time, however, the Celtics big man rotation is far from settled, and a few new pieces are being integrated into the fold.

With the regular season rapidly approaching, check out the keys to the game from Boston’s first postseason tilt.

For some players, it’s all about staying healthy until they are needed in the playoffs. Others need to add something (or several things) to their games. 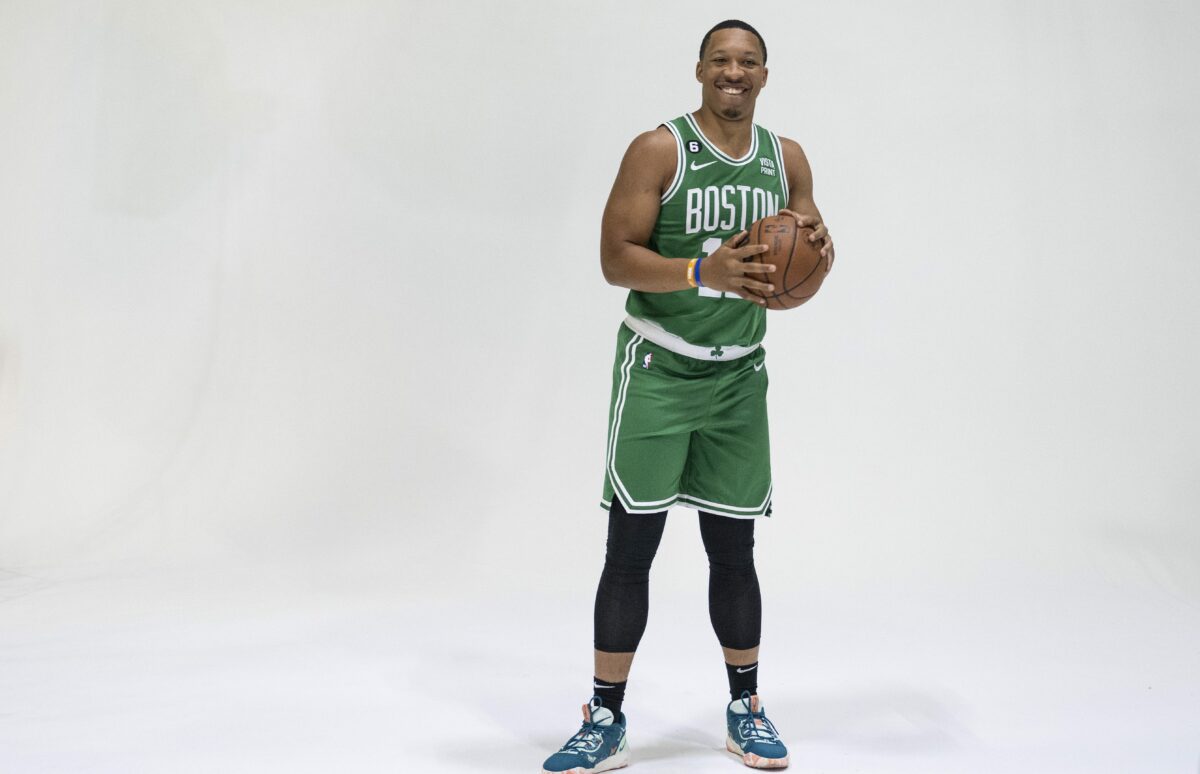 For some Boston Celtics players, it’s easy to come up with an idea of how we want to see their 2022-23 season go. Others require a bit more context and nuance.

For some, it’s all about staying healthy until they are needed in the playoffs. Others need to add something (or several things) to their games. Still others just need to show that they can stay on the floor, and that can often be simply doing less with the floor time they are allotted but doing it better.

To that end, the hosts of the CLNS Media “Celtics Lab” podcast teamed with comedian and noted Celtics fan Gary Gulman to take stock of the team’s training camp roster and set some individual goals for the players on the team.

They also talk about the early returns from training camp, lingering unease from the Udoka affair, and the news of late, so be sure to join Justin Quinn, Cameron Tabatabaie, and Alex Goldberg as we sort through the potential of the 2022-23 Boston Celtics.

These are all 20 players who will be on the Celtics’ roster heading into preseason. 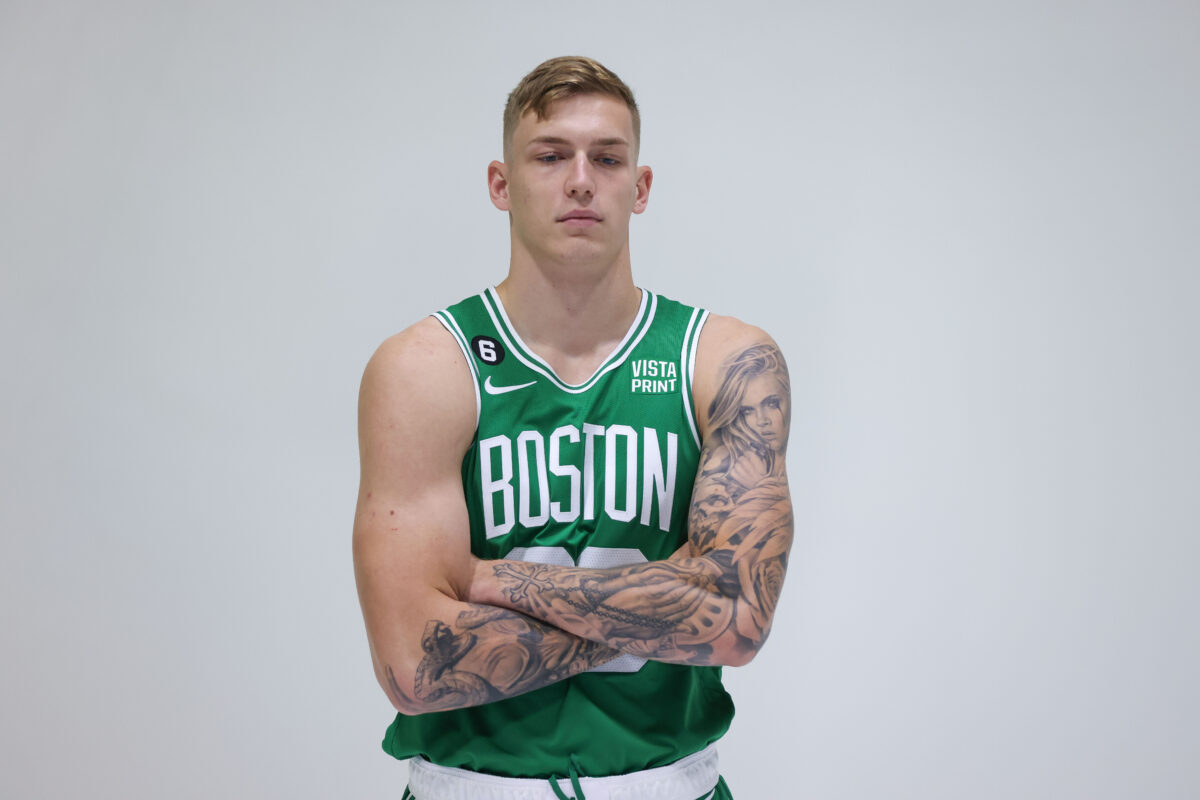 The Boston Celtics have officially released their full training camp roster for the 2022-23 NBA season, with the team currently at a total of 20 players on it — the maximum allowed in an offseason per league rules.

Let’s take a look at all of the players who will be on Boston’s roster at the start of preseason play to kick off the month of October and a return to NBA basketball.

‘As I’ve gotten a little older, (I’ve been) realizing that the things I eat matter more.’ said the Celtics star. 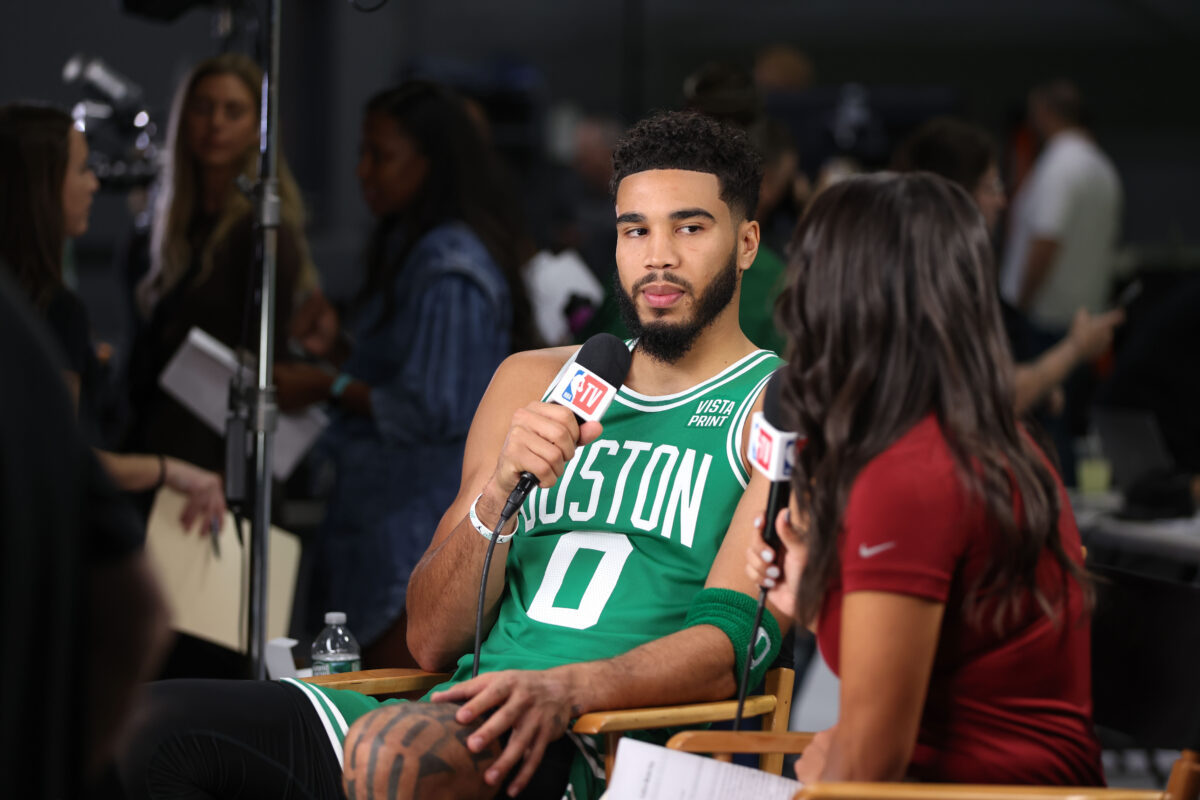 Those among us with a few more years to our name know that the body reacts differently to how one takes care of it as one ages, and for star Boston Celtics forward Jayson Tatum, that is a reality he is now incorporating into how he takes care of himself to ensure his body is able to respond when he needs it to the most.

Speaking at Boston’s 2022 Media Day proceedings, the St. Louis native related how he’s shifted his approach to what he consumes to that end. “I never want to miss a game,” he explained to NBC Sports Boston.

“There’s a science part to it,” he continued. Proper recovery and things like that. The thing I worked on this summer is changing my diet, the things I eat before and after workouts to help me feel better and have more energy.

“I’ve always been a relatively in-shape guy, I could always eat what I want. As I’ve gotten a little older, (I’ve been) realizing that the things I eat matter more. So, (I’m) really changing my diet approaching this season.”

The Tennessee product wants to ensure “as a team we have success because individually, that stuff happens.” 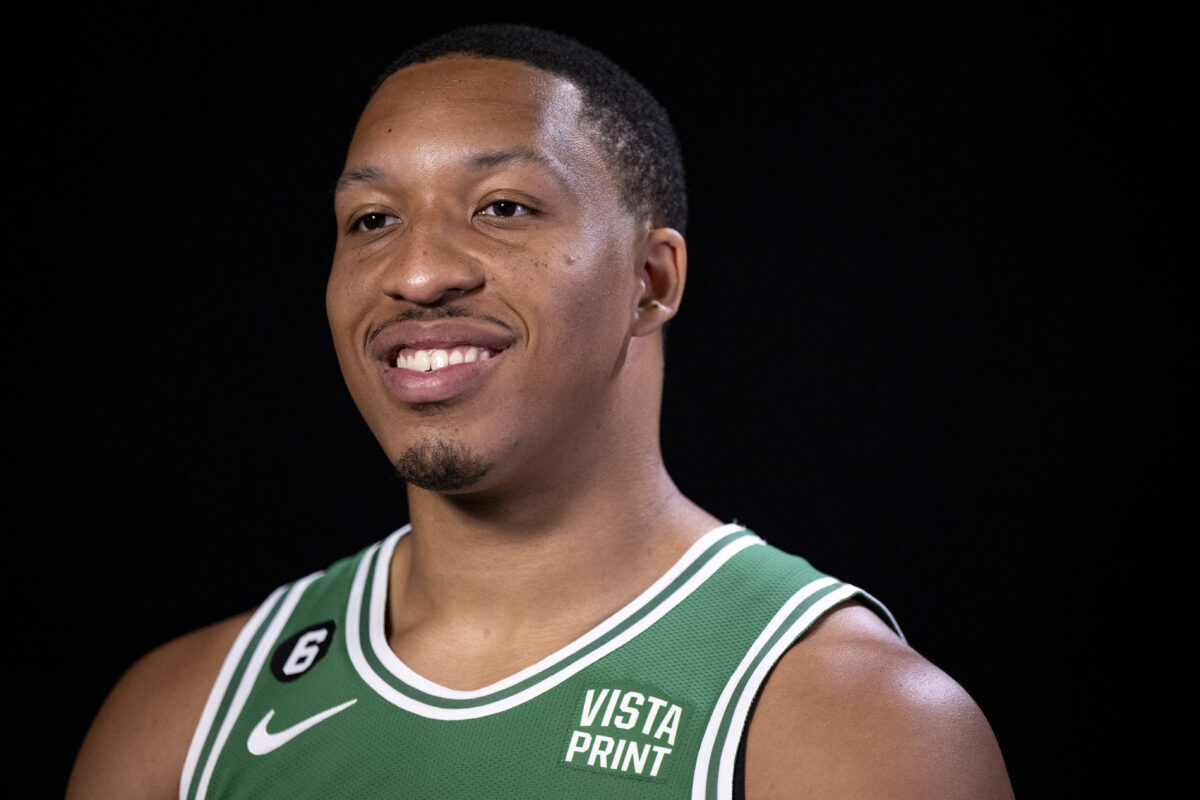 Earlier in the Boston Celtics‘ 2022 offseason, reserve forward Grant Williams paid the Golden State Warriors a compliment by saying that their collective experience at such high levels of play were the difference between a Celtics victory and the Dubs hanging a banner at the end of the 2021-22 season.

The comment went over like a lead balloon at the time due to Williams’ debatable assertion that the Celtics were the better team despite the loss, but arguing over those particular semantics aside, the Tennessee product does indeed have a point. And if the Dubs’ Finals experience was the difference, one would hope Williams has learned from the loss.

Asked about whether he had in a Media Day interview with team reporters Marc D’Amico and Amanda Pflugrad, and the Charlotte native said “Absolutely. I learned what exactly we all are capable of as individuals as a group.”

Bruno Caboclo, Noah Vonleh, Justin Jackson, Denzel Valentine, Jake Layman, and Brodric Thomas all might find themselves a part of the Celtics run at an NBA title this season with the right kind of effort in camp. 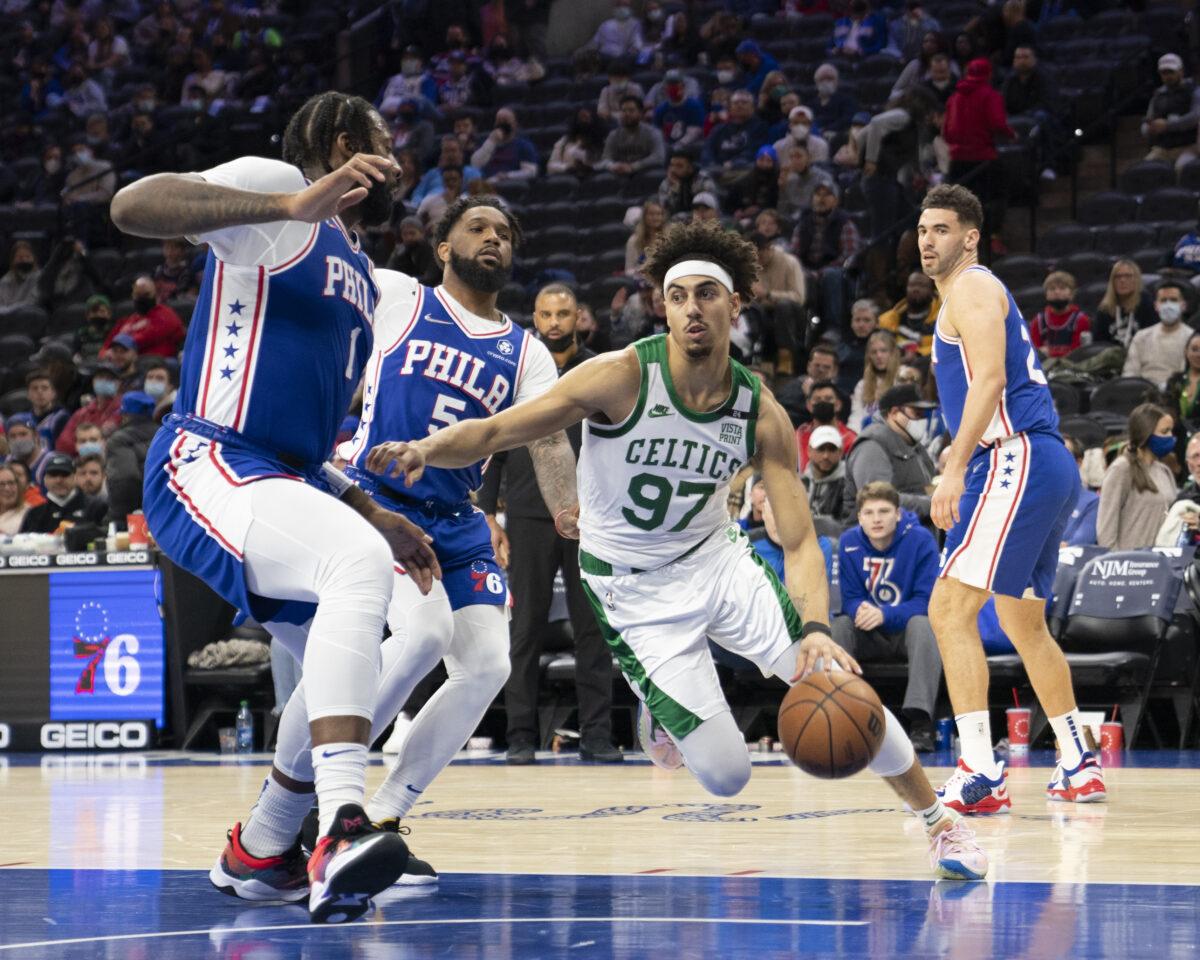 Which of the six unguaranteed contracts signed by as many prospective additions to the Boston Celtics roster for the 2022-23 regular season will be converted into a deal that will last longer than opening night? The Celtics brought on six players to compete in training camp for up to three regular roster slots (or perhaps a two way if one opens and they are eligible).

Bruno Caboclo, Noah Vonleh, Justin Jackson, Denzel Valentine, Jake Layman, and Brodric Thomas all might find themselves a part of the Celtics run at an NBA title this season with the right kind of effort in camp. Which of them has the best shot of actually making the team?

Take a look at the clip embedded above to hear the conclusions they came to.

Remember when the biggest blip on the Boston Celtics’ horizon was gripes about the newest ratings of their players in the latest NBA 2K ratings update? 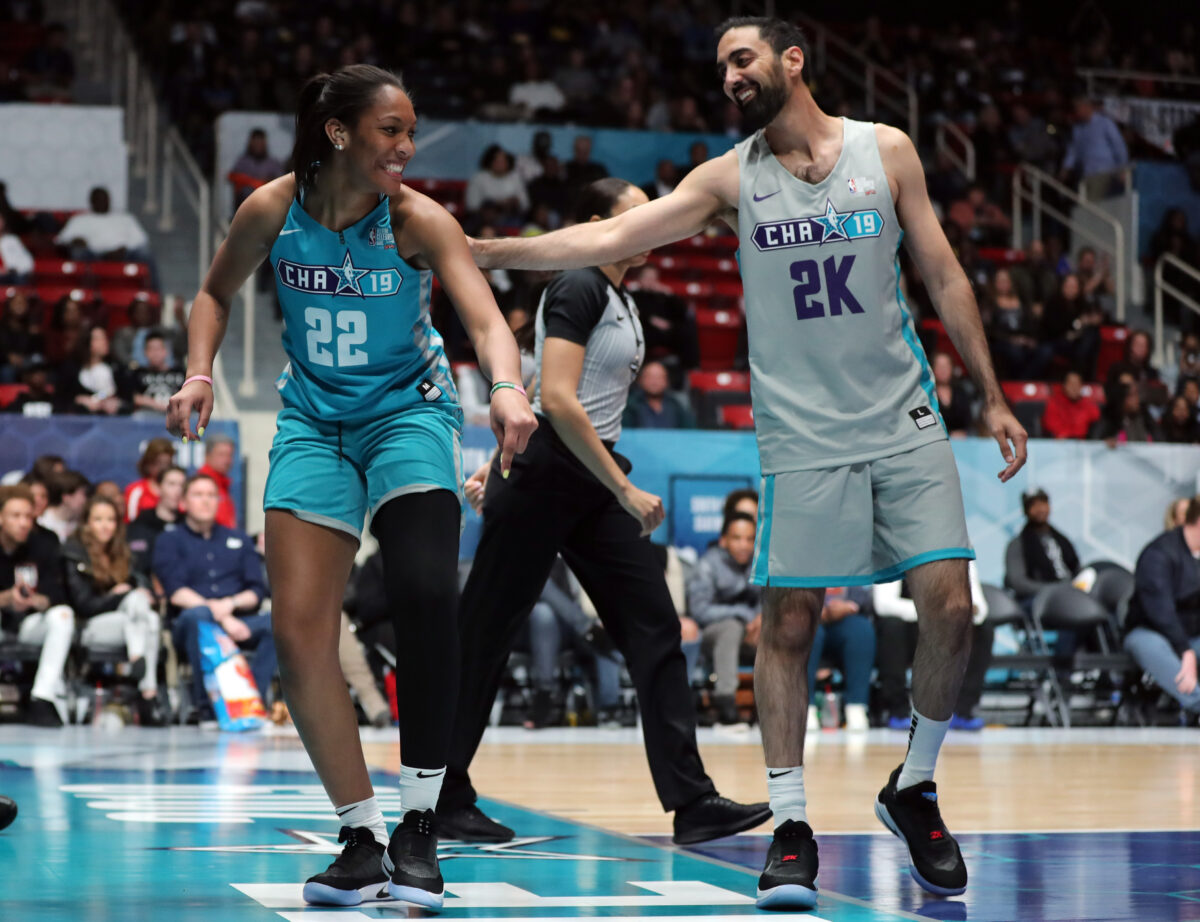 Remember when the biggest blip on the Boston Celtics’ horizon was gripes about the newest ratings of their players in the latest NBA 2K ratings update? We certainly do after a day of chaos in the organization tied to a scandal surrounding Celtics head coach Ime Udoka that broke just after we finished recording this episode.

In it, we talk with NBA 2K frontman Ronnie 2K about the latest iteration of the game, the Celtics in it, how they feel about their ratings, how it’s made, and what might be coming down the pike. We even get into how Ronnie’s looming wedding and host Cameron Tabatabaie’s tweets made it into the game.

We do NOT talk about Udoka, of course, given the timing. But there’s plenty of news about Boston’s training camp prospects and other less incendiary topics to spell you from the whirlwind engulfing the Celtics at present.

Join hosts Alex Golberg, Justin Quinn, and Cameron as we talk all things 2K, and sort through all the news that seemed so much more serious 24 hours ago than it does now.

Buckle up folks, this is going to be a rough week.