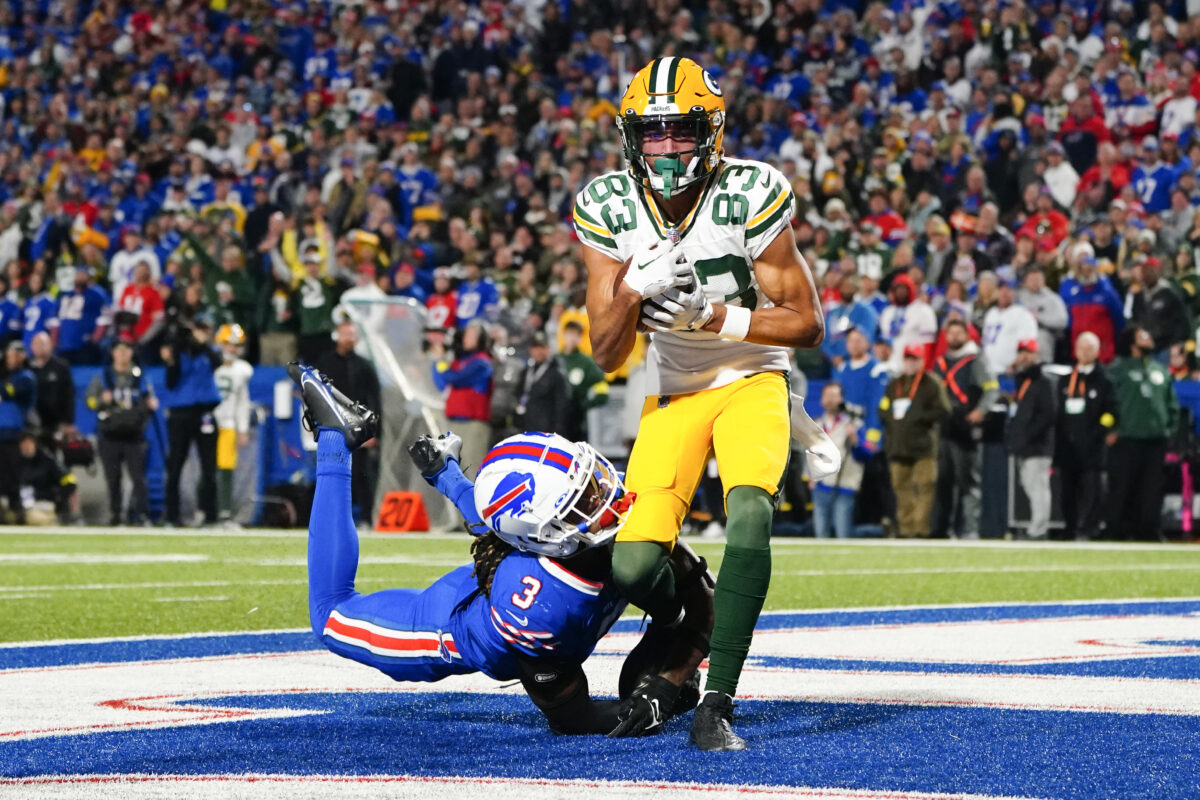 Former Nebraska Cornhuskers wide receiver Samori Toure has appeared in five games for the Green Bay Packers this season, and he has helped set a historic franchise milestone.

According to Packers reporter Wes Hodkiewicz, Toure, Romeo Doubs, and Christian Watson are the first trio of Packers rookies to catch touchdown passes in the same non-strike season since 1954.

Toure had his first NFL touchdown reception in Week 8 against the Buffalo Bills. After being inactive for the first six weeks of the season, he has taken on a larger role. In the last five weeks, he has played 77 total offensive snaps, and he has been targeted nine times. In his limited action, he has been effective. Toure has a 110.9 passer rating when targeted, and he has zero drops.

After losing Davante Adams this offseason, the Packers have relied heavily on their rookie wide receivers. Down the stretch, Toure should continue to have opportunities.

Below is a short photo gallery of Toure’s rookie season, thus far.

The former Husker turned podcaster is now entering his tenth year in the National Football League. 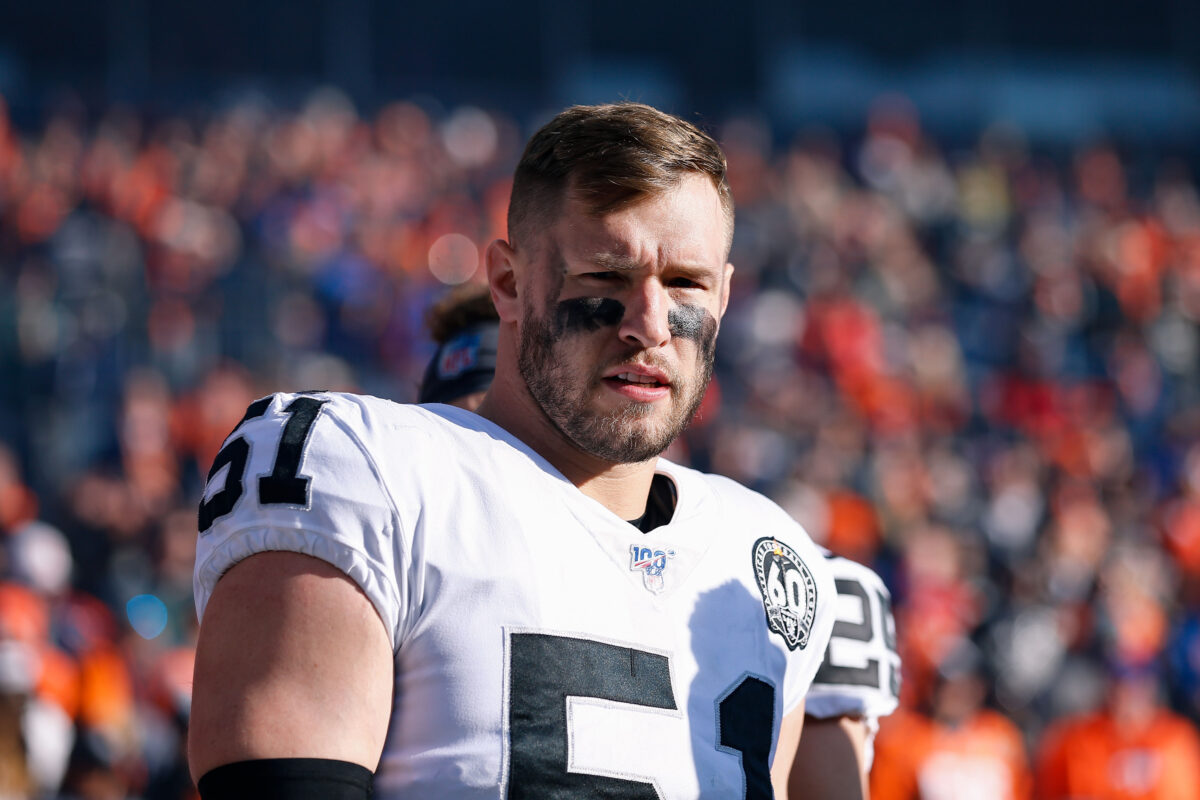 On Monday evening, a former Blackshirt announced that he had signed a contract for what will be Year 10 in the NFL. Will Compton confirmed that he would be joining the Atlanta Falcons, having previously spent time with Washington (2013-17), Tennessee (2018), Oakland (2019), Tennessee (2020), and Las Vegas (2021).

For his career, the Bonne Terre, Missouri native has recorded 323 career tackles, 1.0 sacks, four forced fumbles, and three interceptions. He was an undrafted free agent in the 2013 Draft. While playing at North County High, Compton was a first-team all-state linebacker and wide receiver. He chose Nebraska over schools such as Notre Dame and Vanderbilt.

Compton is also known for his popular podcast “Bussin with the Boys,” which he hosts with Titans Pro-Bowl Offensive Lineman Taylor Lewan. In addition, the former Husker broke the news of his signing himself and was quick to receive congratulations from NFL media and players alike. Scroll below and look at a photo gallery of Will Compton’s journey from Nebraska to Atlanta. 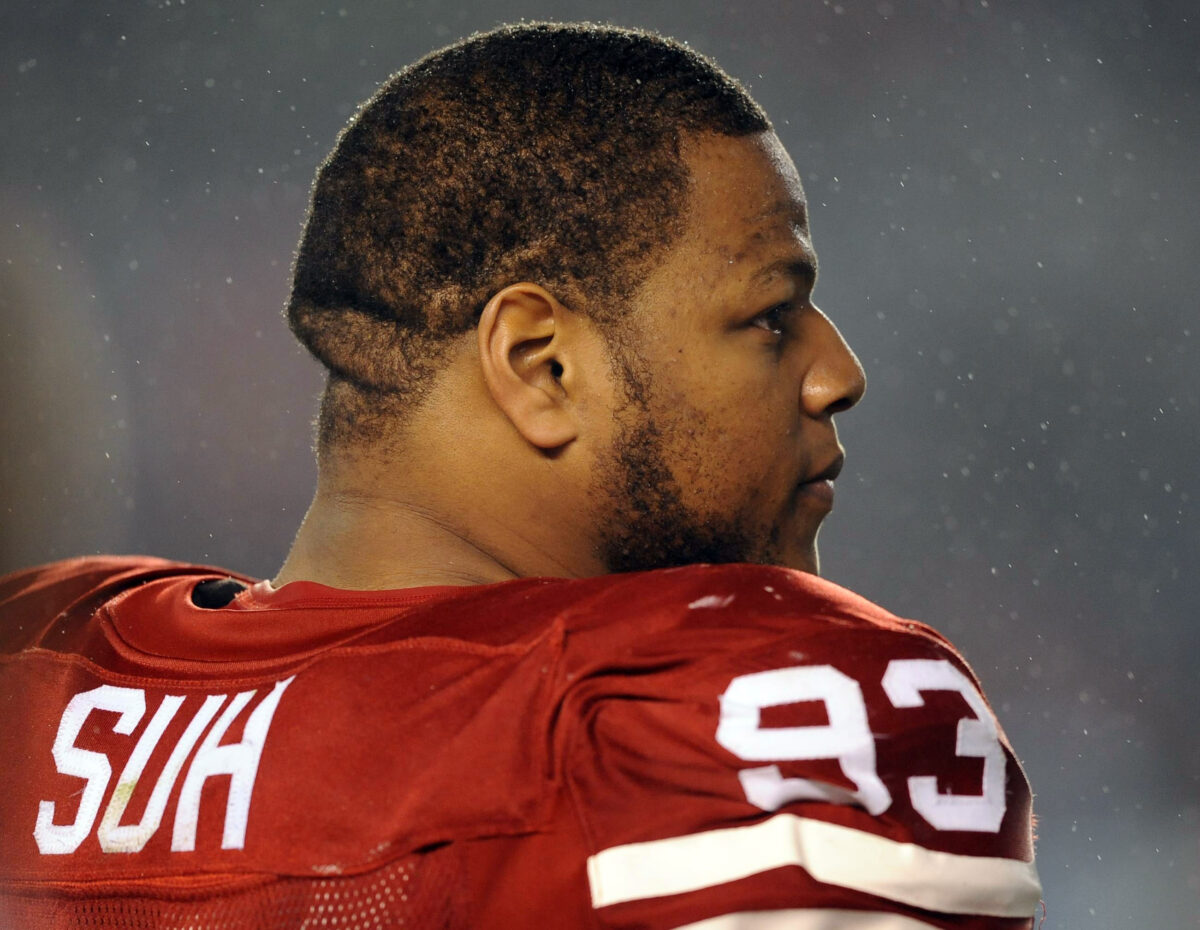 Ndamukong Suh has returned to the NFL. According to NFL Network’s Ian Rapoport, the Philadelphia Eagles are signing Suh to a one-year deal.

Suh is a Nebraska legend. In 2009, he recorded 85 total tackles, 20.5 tackles for loss, and 12.0 sacks for the Cornhuskers en route to being named the AP College Football Player of the Year. He remains the only defensive player to ever win the award. He has had a prolific NFL career, as well. He is a five-time All-Pro, and he was selected to the NFL 2010s All-Decade Team.

Suh last played for the Tampa Bay Buccaneers in 2021. He started all 17 games and recorded 27 combined tackles and six sacks.

Suh is joining a Super Bowl contender in the Eagles, who are off to a blazing 8-1 start. The Eagles have two other former Cornhuskers on their roster: center Cam Jurgens and tight end Jack Stoll.

The rich get richer. The #Eagles are signing free agent DT Ndamukong Suh to a 1-year, sources say, beefing up their defensive front with a top free agent. They want to keep the DL a strength. The deal has been agreed to and is done. pic.twitter.com/0Egc4V8Hiu

Here are some social media reactions to the news. 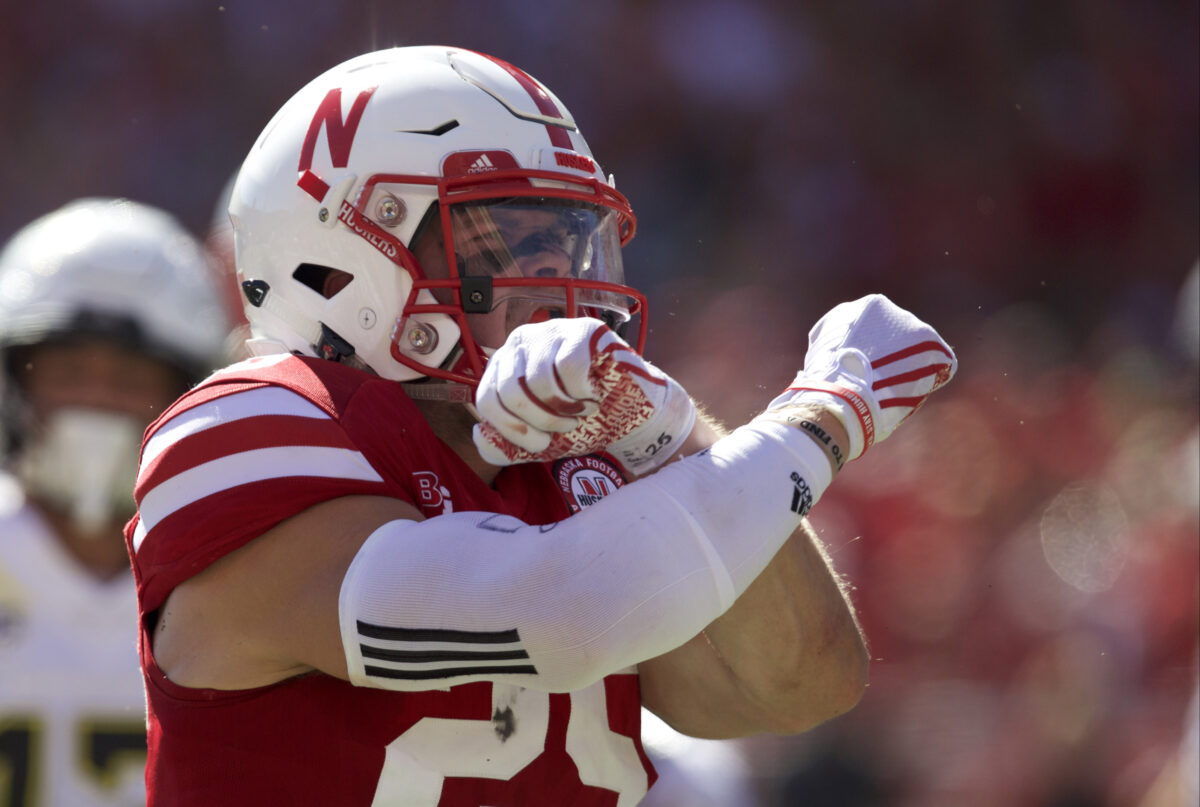 Gerry was selected by the Philadelphia Eagles in the fifth round of the 2017 NFL Draft. He spent four seasons with the Eagles appearing in 46 games. During his tenure, he recorded 163 combined tackles, eight tackles for loss, 3.5 sacks, and three interceptions. He was a member of their Super Bowl team in 2018.

The Commanders signed Gerry in August, but he was placed on the IR and eventually released. He was signed to the practice squad on November 3rd.

Below is a short photo gallery of Gerry’s college career.

The Cleveland Browns have signed a former Nebraska defensive lineman 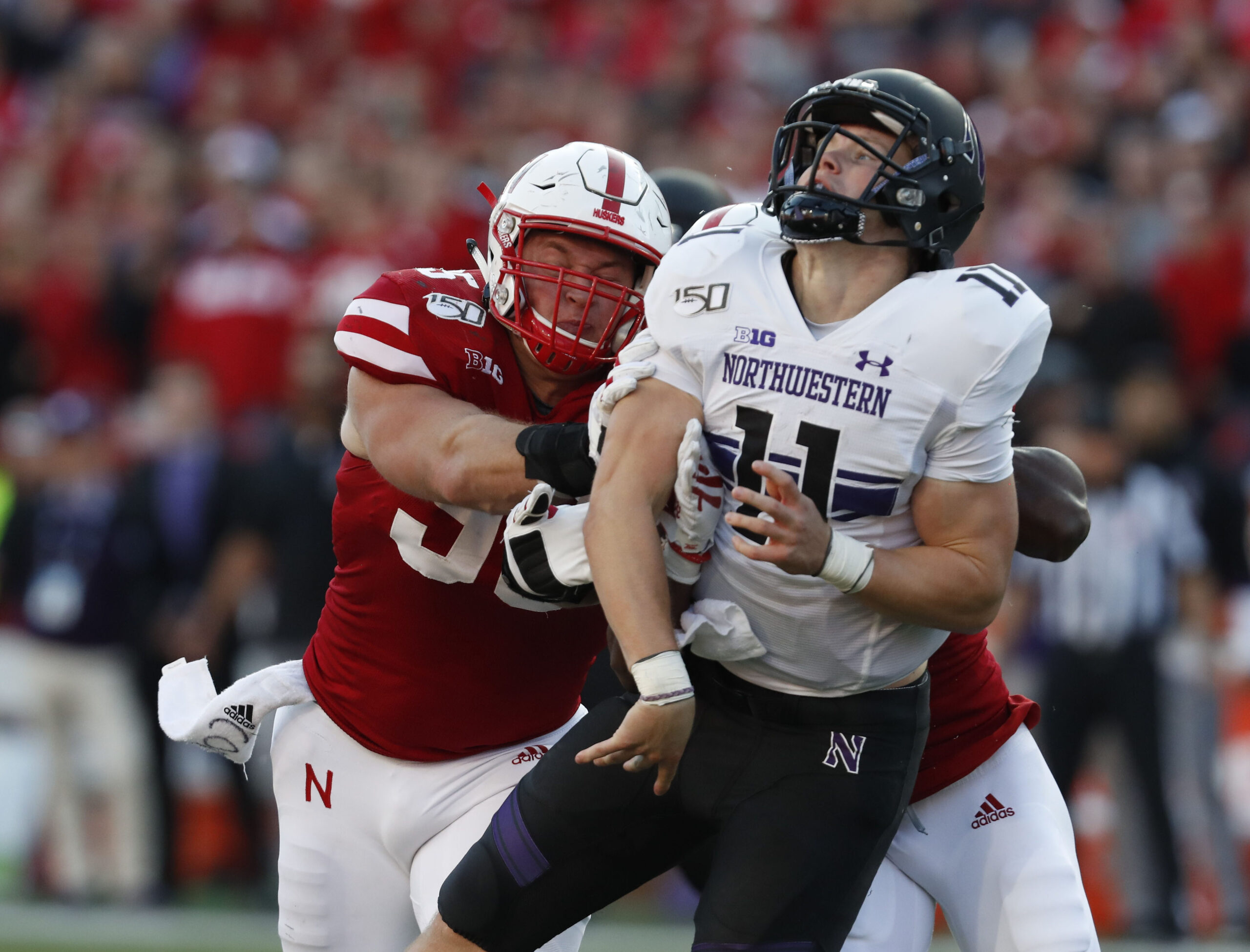 Stille was not selected in the 2022 NFL Draft, but he was signed by the Dolphins as an undrafted free agent. This season, he appeared in one game for the Dolphins, which came on October 23 against the Pittsburgh Steelers. He played nine defensive snaps and had two combined tackles.

Below is a short photo gallery of Stille’s tenure with the Cornhuskers. 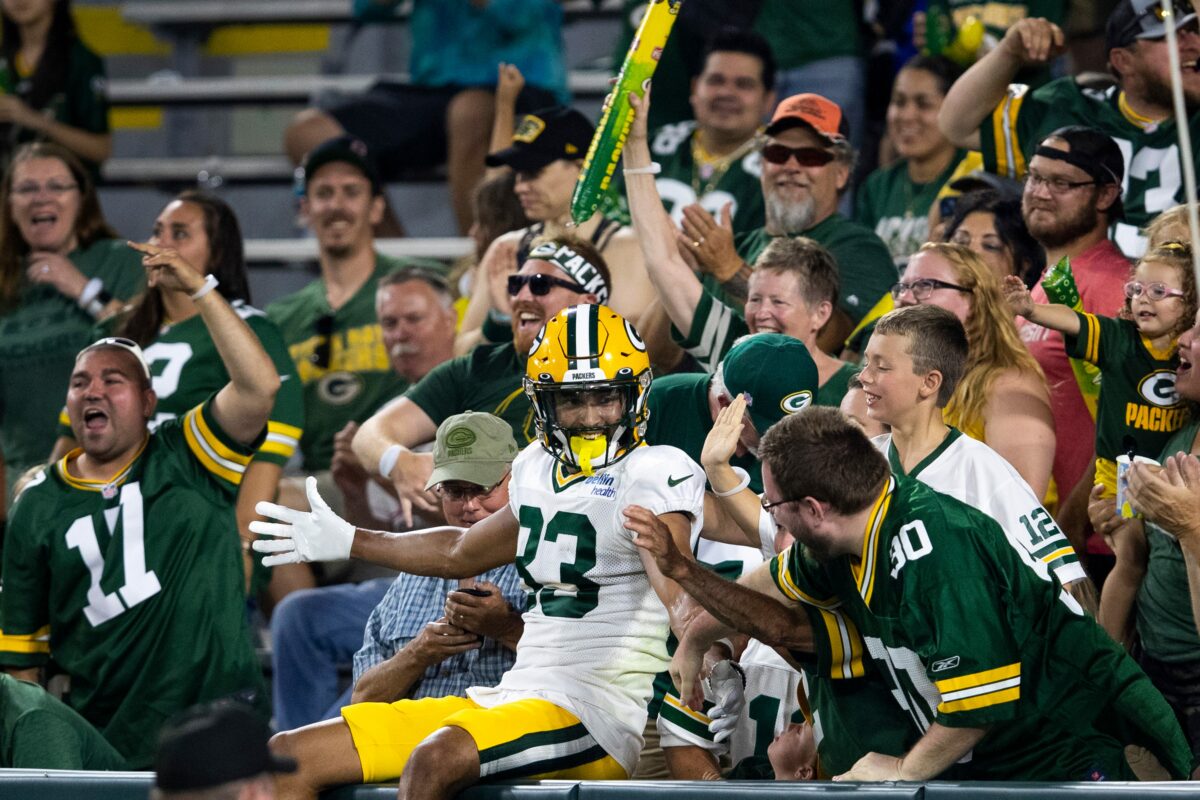 On the flip side, a handful of Huskers were either held out of the game, sidelined with an ailment or suffered an injury in this past weekend’s slate of games.

Leading the way for the Huskers, perhaps to little surprise, was Lavonte David and Brett Maher, both of whom have had stellar seasons to this point.

Below are all the former Huskers’ notes and stats from Week 7 in the NFL: 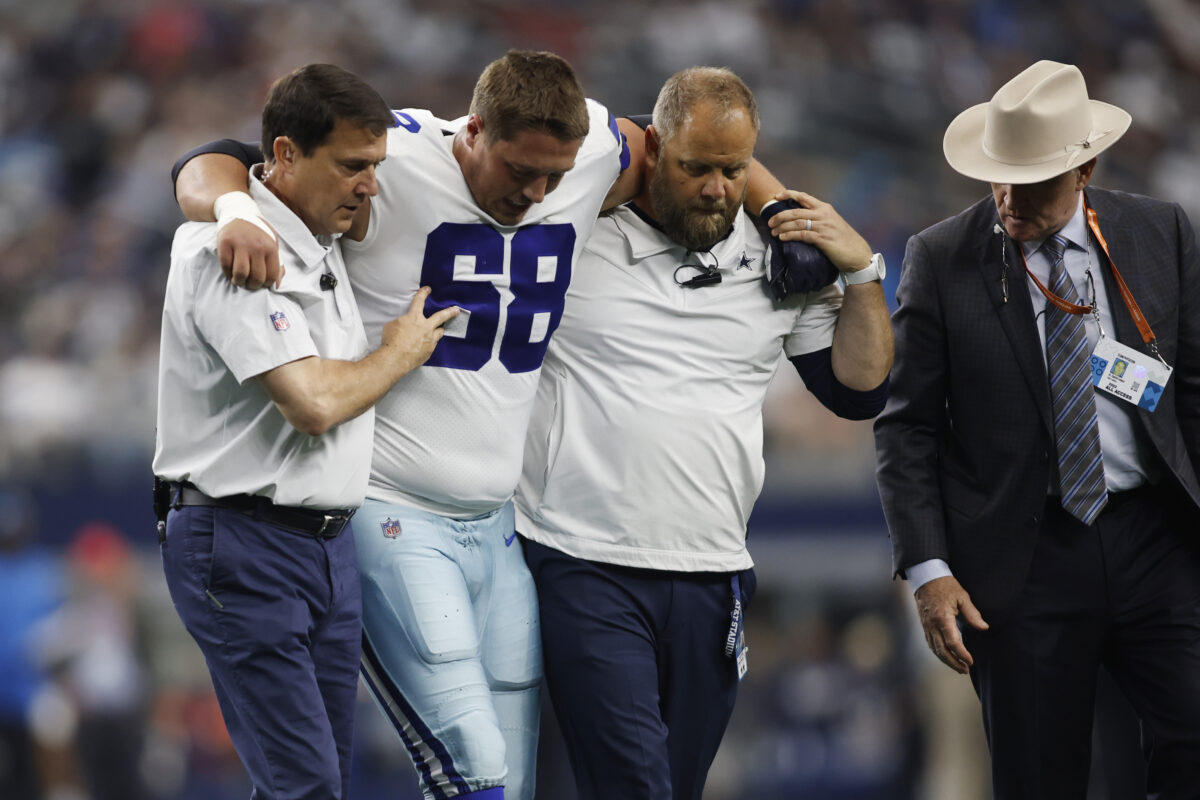 According to Michael Gehlken of the Dallas Morning News, Dallas Cowboys guard Matt Farniok suffered a torn hamstring, and he could miss six weeks.

Farniok had a great college career at Nebraska. He is one of only 13 players in program history to be a two-time team captain. Farniok appeared in 39 games for the Cornhuskers, and he started games at tackle, guard, and center. In 2020, he was an Honorable-Mention All-Big Ten.

The Cowboys selected Farniok in the seventh round of the 2021 NFL Draft. As a rookie, he played sparingly, logging only 23 total offensive snaps. This season, he has taken on a larger role. He started two games for the Cowboys, and through seven weeks, he has logged 190 offensive snaps.

Hopefully, Farniok can have a quick recovery and get back on the field soon.

Cowboys backup C/G Matt Farniok suffered a torn hamstring on an extra point Sunday vs. Lions, and he could miss about six weeks, two people familiar with situation said. Farniok is expected to be placed on injured reserve with opportunity to return later in season.

Below is a short photo gallery of Farniok’s career, thus far. 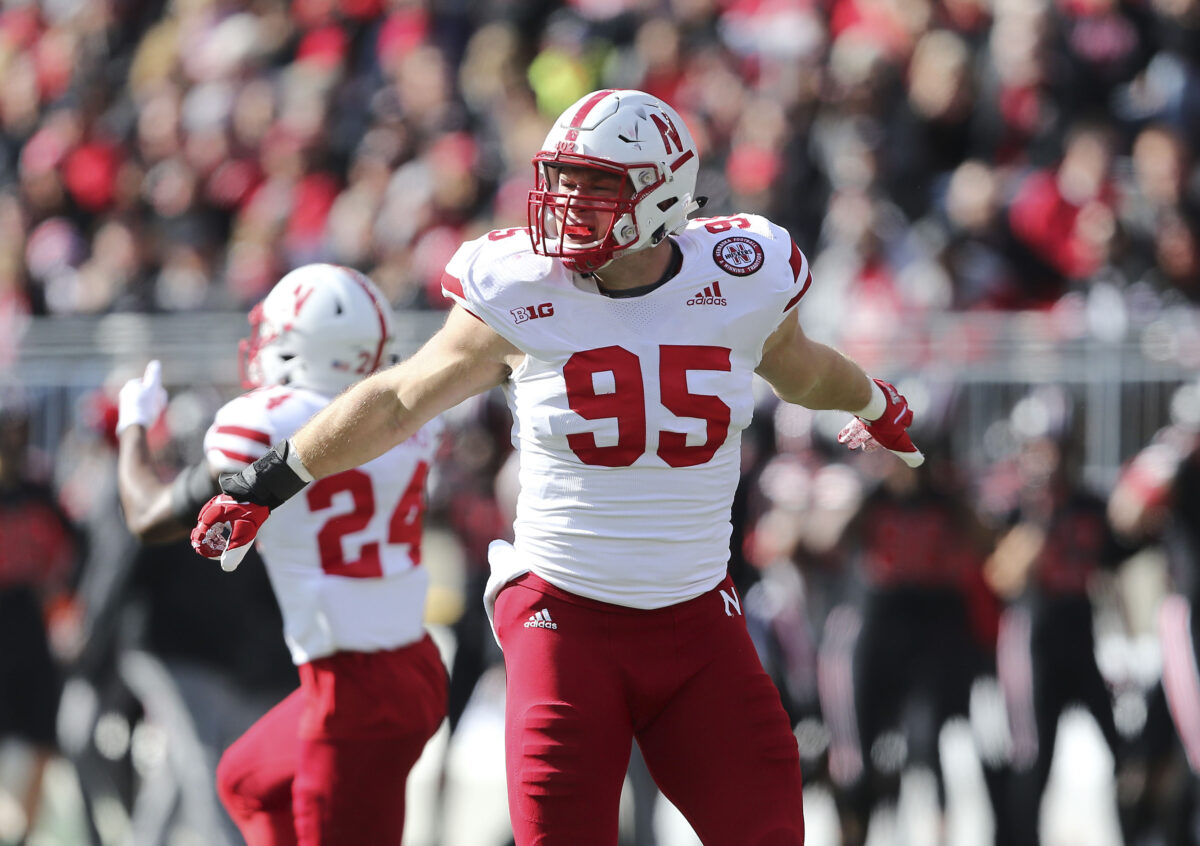 The Miami Dolphins have elevated former Nebraska Cornhuskers defensive end Ben Stille to their active roster. Stille will be eligible to play on Sunday night against the Pittsburgh Steelers.

Stille joined Nebraska in 2016. He redshirted and worked with the scout team before seeing game action in 2017. Stille went on to play five seasons for the Cornhuskers, appearing in 53 total games. He recorded 149 total tackles, 30 tackles for loss, 14.5 sacks, seven passes defended, and a forced fumble. In 2021, Pro Football Focus named Stille as a First-Team All-Big Ten selection.

Stille was not selected in the 2022 NFL Draft. He signed with the Dolphins as an undrafted free agent.

Below is a short photo gallery of Stille’s career with Nebraska.

The NFL season is now officially in full swing after three weeks and this most recent slate of games delivered on drama (or not if you’re a fan of watching a scoring shootout in prime time). With the Nebraska Cornhuskers on bye in Week 4 of the college football season, Husker fans got to enjoy seeing some former stars in the red and white play at the next level. 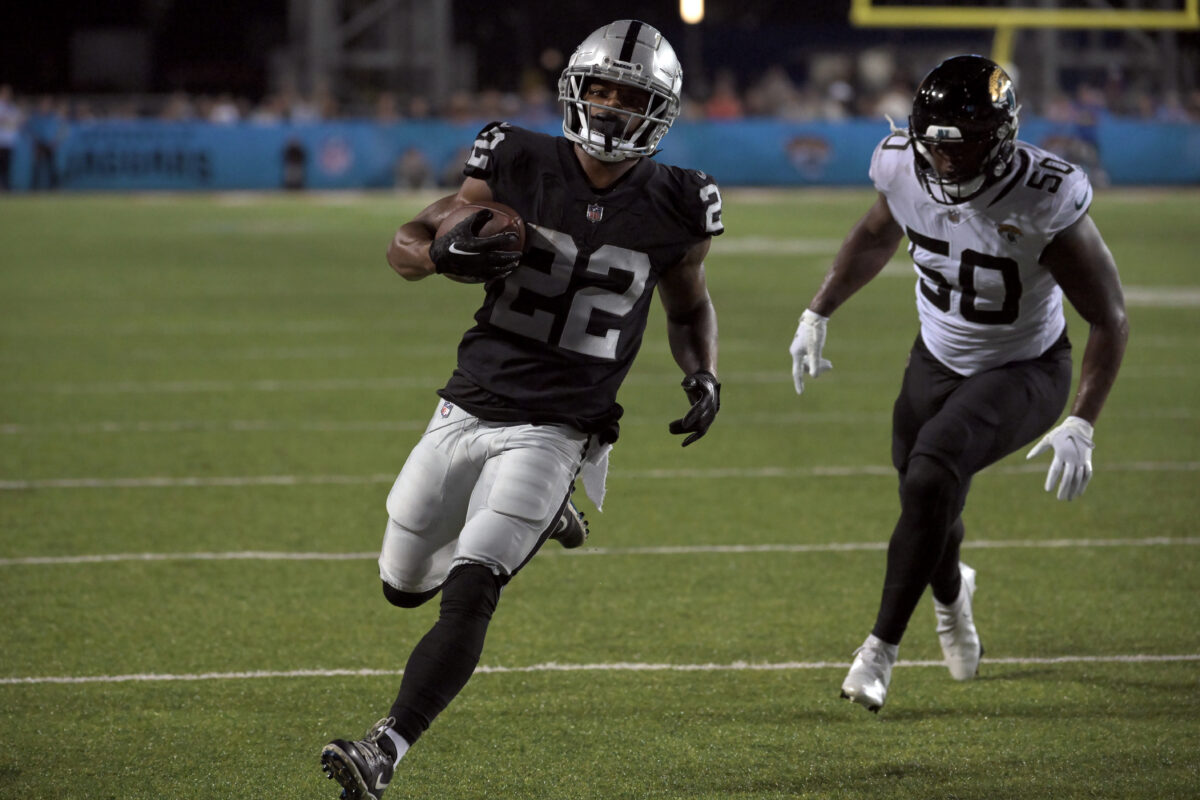 The NFL season is now officially in full swing after three weeks and this most recent slate of games delivered on drama (or not if you’re a fan of watching a scoring shootout in prime time). With the Nebraska Cornhuskers on bye in Week 4 of the college football season, Husker fans got to enjoy seeing some former stars in the red and white play at the next level.

15 players who spent their college career at Nebraska saw action in the NFL this week. 5 additional former Huskers are on practice squads (Ben Stille, Carlos Davis, Devine Ozigbo, Austin Allen and Khalil Davis) and two more have yet to play in the 2022-23 season due to injury. Cornerback Cam Taylor-Britt is on Cincinnati’s IR and offensive lineman Nick Gates is on the New York Giants’ Physically Unable to Perform (PUP) list.

Lavonte David and Randy Gregory led the way with big defensive performances but read below to see how all the former Huskers fared in Week 3 of the NFL season:

Lavonte David led the way for a number of former Huskers in Week 1 of the NFL season, which also saw the debuts of Cam Jurgens and JoJo Domann. 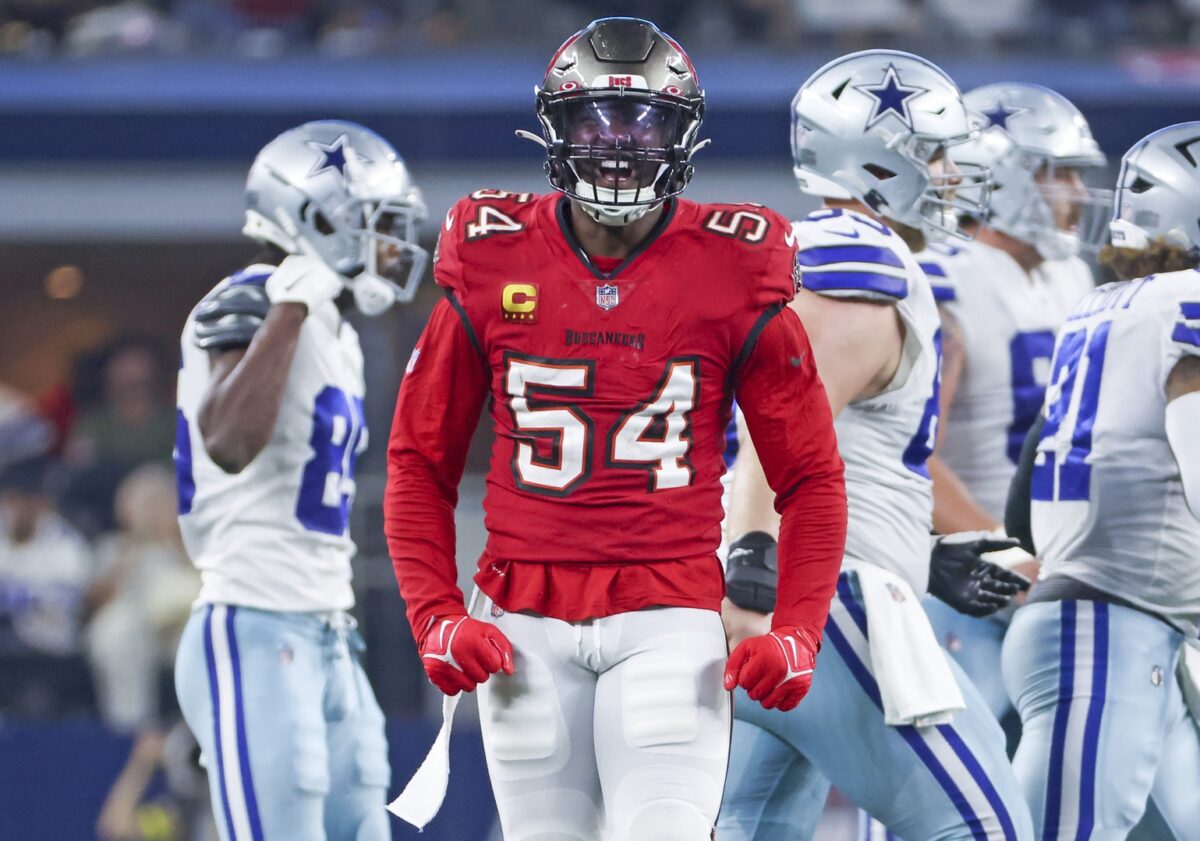 Taylor-Britt and New York Giants’ offensive lineman Nick Gates were the only former Huskers to sit out Week 1 with injuries.

Burkhead, an ever-present receiving threat out of the backfield, has a slight lead on the Texans’ No. 1 running back position over rookie Dameon Pierce. David, a Super Bowl winner, is in his team-leading 11th year in Tampa and lines up with Shaquille Barrett and Devin White to make an imposing combination of linebackers. Week 1 marked Gregory’s first game with the Denver Broncos after spending seven years with the Dallas Cowboys.

While the aforementioned trio will likely make the most noise in the 2022 NFL season, the rest of the fraternity of former Huskers will contribute as well.

Read below to see how previous Nebraska players fared in Week 1 of the NFL season: