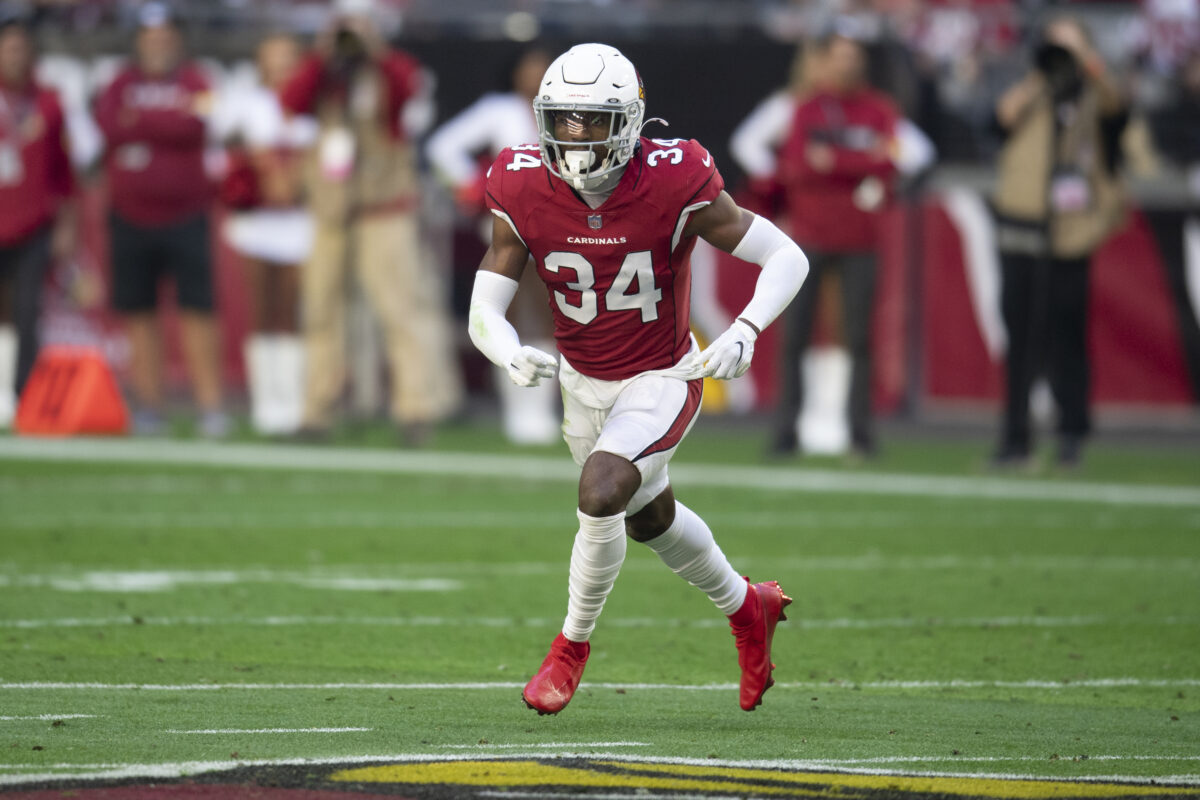 The Arizona Cardinals inked safety Jalen Thompson to a new contract that keeps him with the team through 2025. The former fifth-round supplemental draft pick from 2019 gets a big pay day.

The original numbers reported were that the deal is worth nearly $40 million and has $24.5 million in guaranteed money.

Over the Cap has Thompson’s contract details. Below, we break down the numbers and details of the contract extension below.

Following the three-year extension for safety Jalen Thompson, which other Cardinals could be next to get paid? 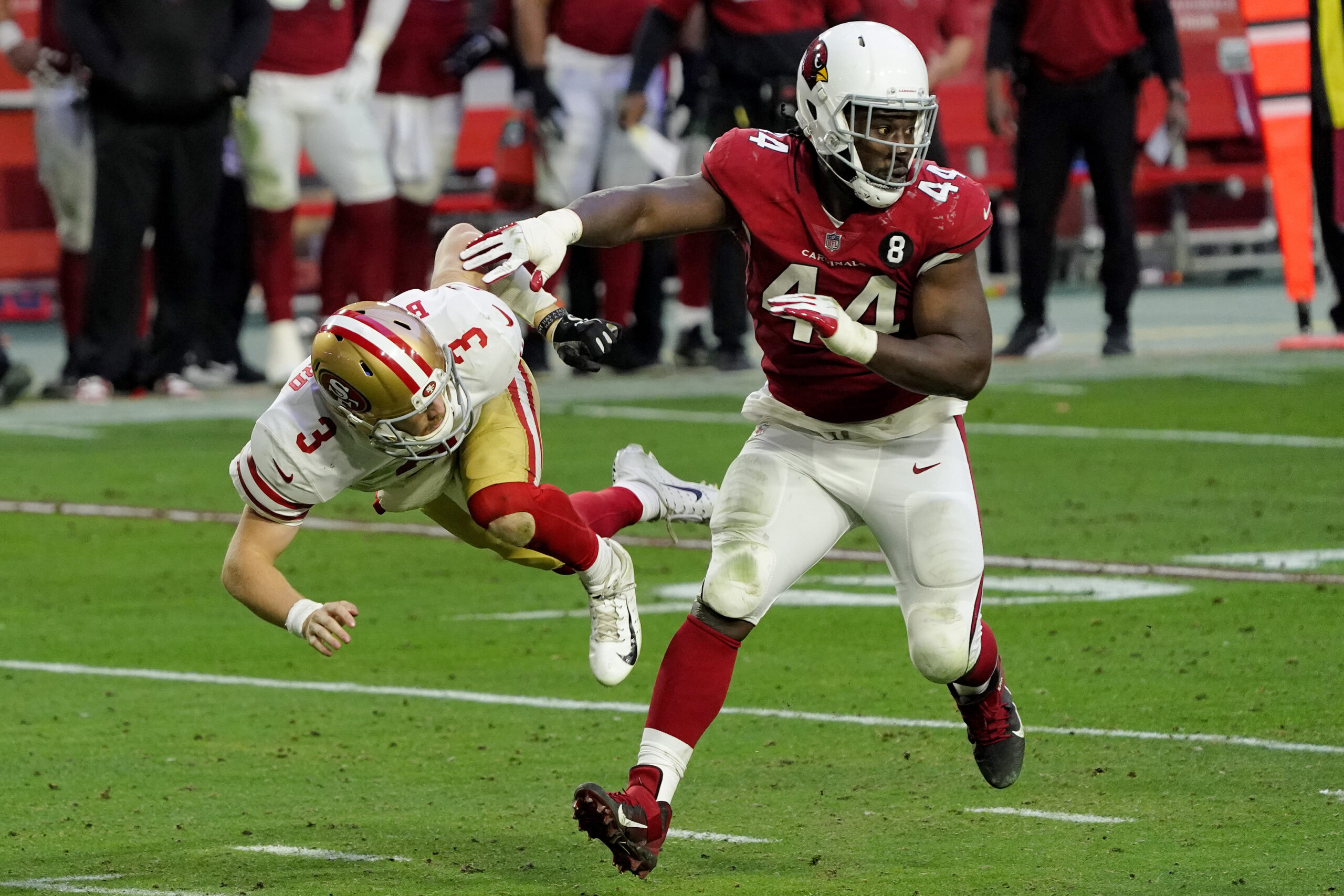 The Arizona Cardinals have made it a priority to keep their young, talented core intact moving forward. Following the massive contract extension for Kyler Murray, the Cardinals awarded safety Jalen Thompson a three-year deal.

Which players on the team could be next in line to receive an extension? 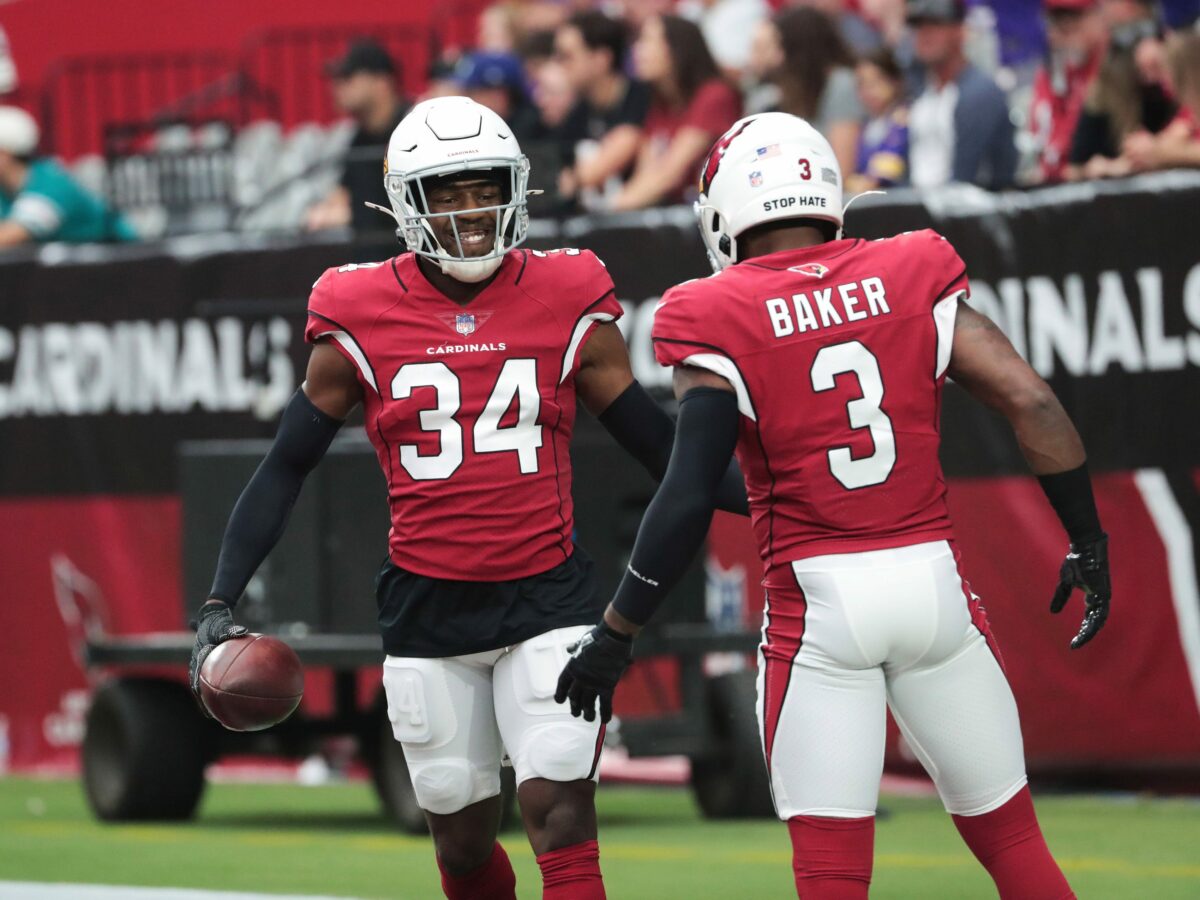 Safety Jalen Thompson no longer is in the final year of his contract. Originally signed through the 2022 season, the Arizona Cardinals announced he signed a contract extension though the 2025 season.

According to NFL Network’s Tom Pelissero, the deal is worth nearly $40 million and in cludes $24.5 million in guaranteed money.

Thompson enters his fourth NFL season. He was selected in the fifth round of the supplemental draft in 2019 and has blossomed into a Pro Bowl-caliber player.

In 2021, he arguable should have been a Pro Bowler after he had 121 tackles, three interceptions and seven pass breakups.

Fellow safety Budda Baker, a four-time Pro Bowler and two-time All-Pro, is signed through 2024, so the Cardinals have three more seasons with the two of them protecting the back end of the defense.

He was placed on the league’s reserve for suspended players and does not count against the Cardinals’ 53-man roster until Week 7. 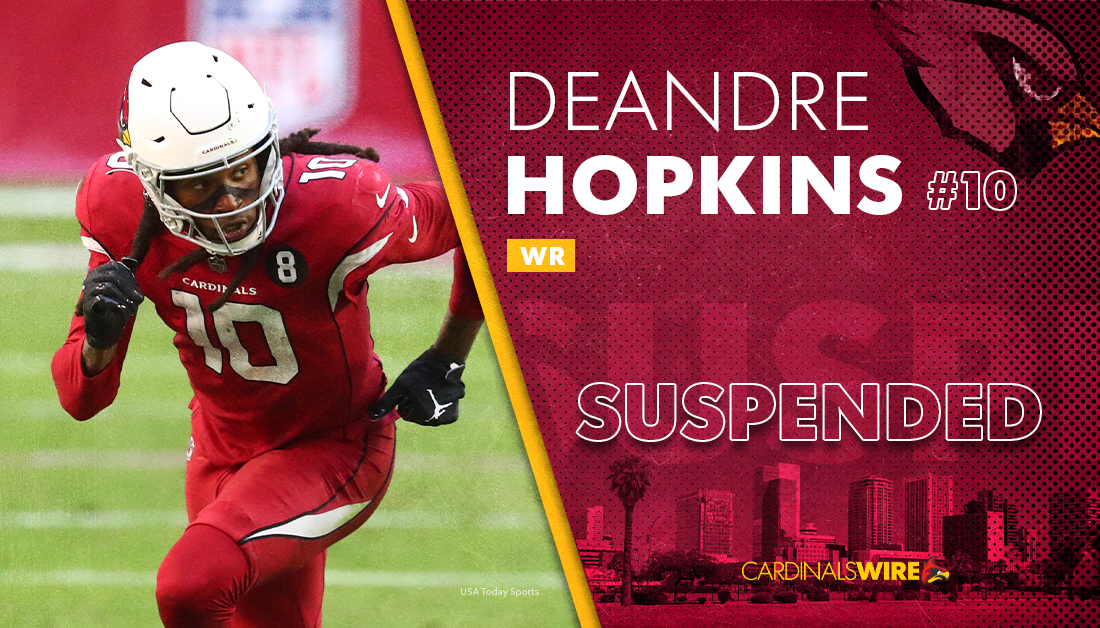 The Arizona Cardinals made a number of moves on Tuesday to get the roster down to 53 players. One of the moves went unannounced but was expected and known.

Wide receiver DeAndre Hopkins was moved from the active roster to the league’s reserve/suspended list. It exempts players from the team’s active roster.

Hopkins was suspended six games for testing positive for a banned performance-enhancing substance.

With the suspension officially beginning, Hopkins now cannot be in the team facility until after the Cardinals play their sixth game of the season.

Comments made by Kliff Kingsbury suggest that Justin Pugh might not ne able to play in Week 1. 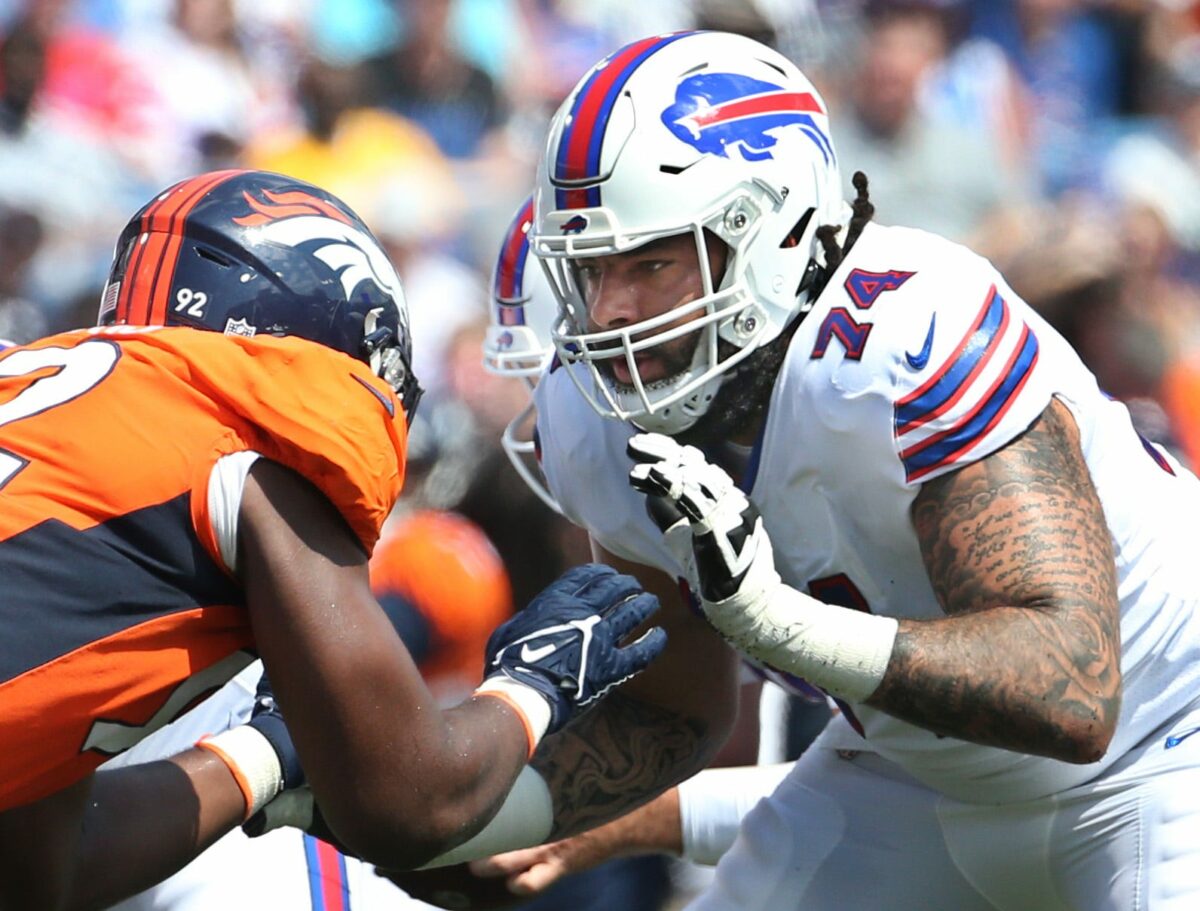 The Arizona Cardinals made a surprise trade to acquire offensive lineman Cody Ford from the Buffalo Bills. Many wondered why they made the move.

It turns out that he could be in the starting lineup when the Cardinals take the field at State Farm Stadium against the Kansas City Chiefs in Week 1.

When the Cardinals participated in a joint practice in Nashville with the Tennessee Titans on Wednesday, Ford was at left guard with the starters, replacing Justin Pugh, who has suffered a stinger.

Head coach Kliff Kingsbury explained the reason for the trade was because of injuries.

“Some of the injuries we’ve inside there, we felt like it was a position where we could get some more depth,” he said Tuesday.

They have suffered injuries to both their starting guards — Pugh and Will Hernandez. Hernandez is expected by by next week and Pugh’s status is unknown.

But what is telling is what Kingsbury said Wednesday after he worked with the first team against the Titans.

“We’re excited,” he said. “To be able to come out here and pick up enough to go in there was pretyt impressive.

“We’ve just got to keep spoonfeeding him the offense and get him ready for Week 1.”

The situation with Pugh’s injury is suddenly something to pay attention to.

The Cardinals acquire Kyler Murray’s former college teammate from the Bills in exchange for a 2023 fifth-round draft pick. 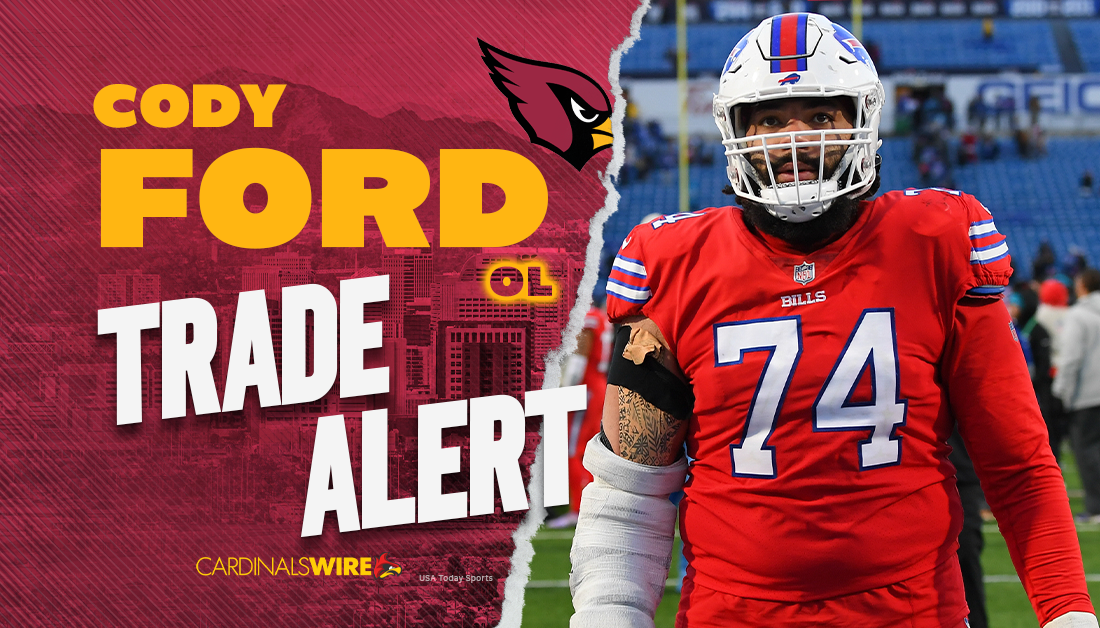 The Arizona Cardinals announced a trade Monday afternoon, but it wasn’t for a position many expected. It was not to acquire a cornerback.

The team announced it traded a 2023 fifth-round draft pick to the Buffalo Bills in exchange for offensive lineman Cody Ford, who was a second-round pick in 2019.

Ford played three seasons for the Bills, appearing in 38 games, starting 29. He started at right tackle as a rookie and has been at guard since then.

He played collegiately with quarterback Kyler Murray and receiver Marquise Brown at Oklahoma.

The move suggests that either one of the offensive linemen expected to make the team either will be cut, traded or suffered a long-term injury.

On the surface, he would seem a logical replacement for Justin Murray. Murray has not played in the preseason and plays both guard and tackle.

Ford is in the final year of his rookie contract and is set to make $1.47 million.

The deal is pending Ford passing a physical exam.

To make room for Ford on the roster, the team released receiver Marcell Ateman.

Players rave about his ability to run and his throwing ability. 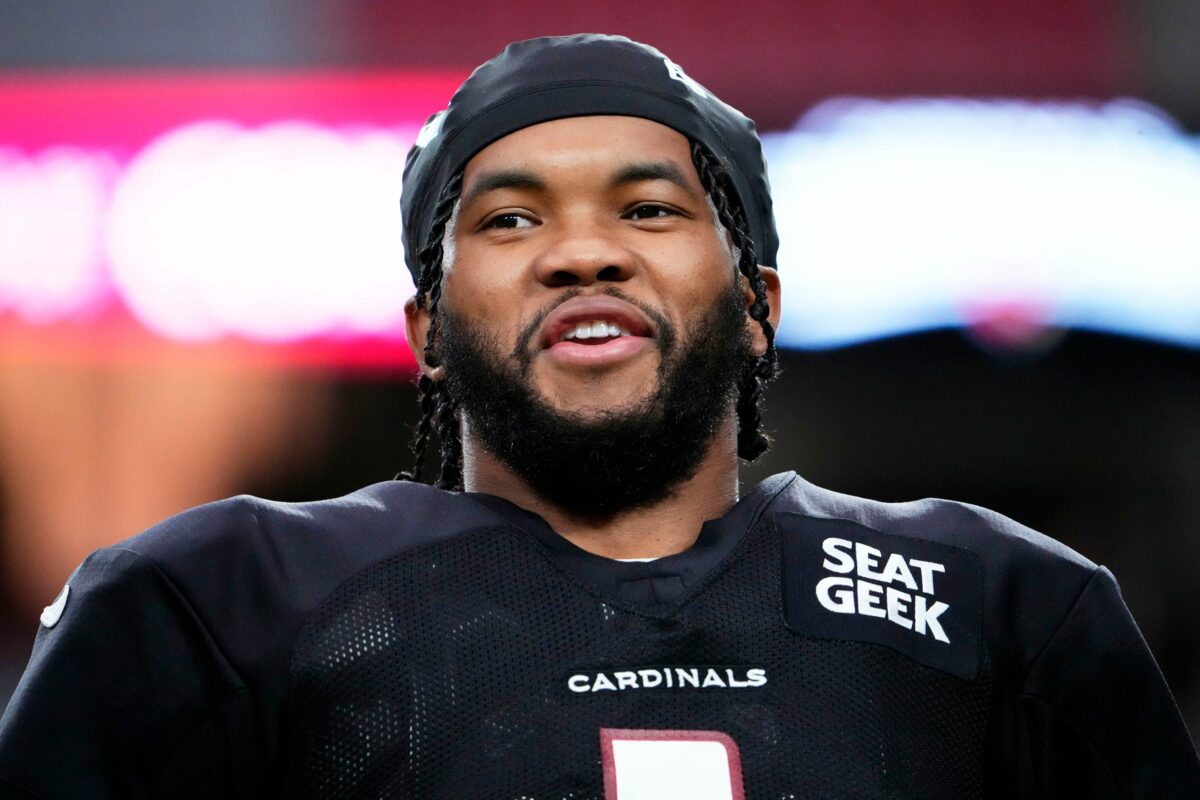 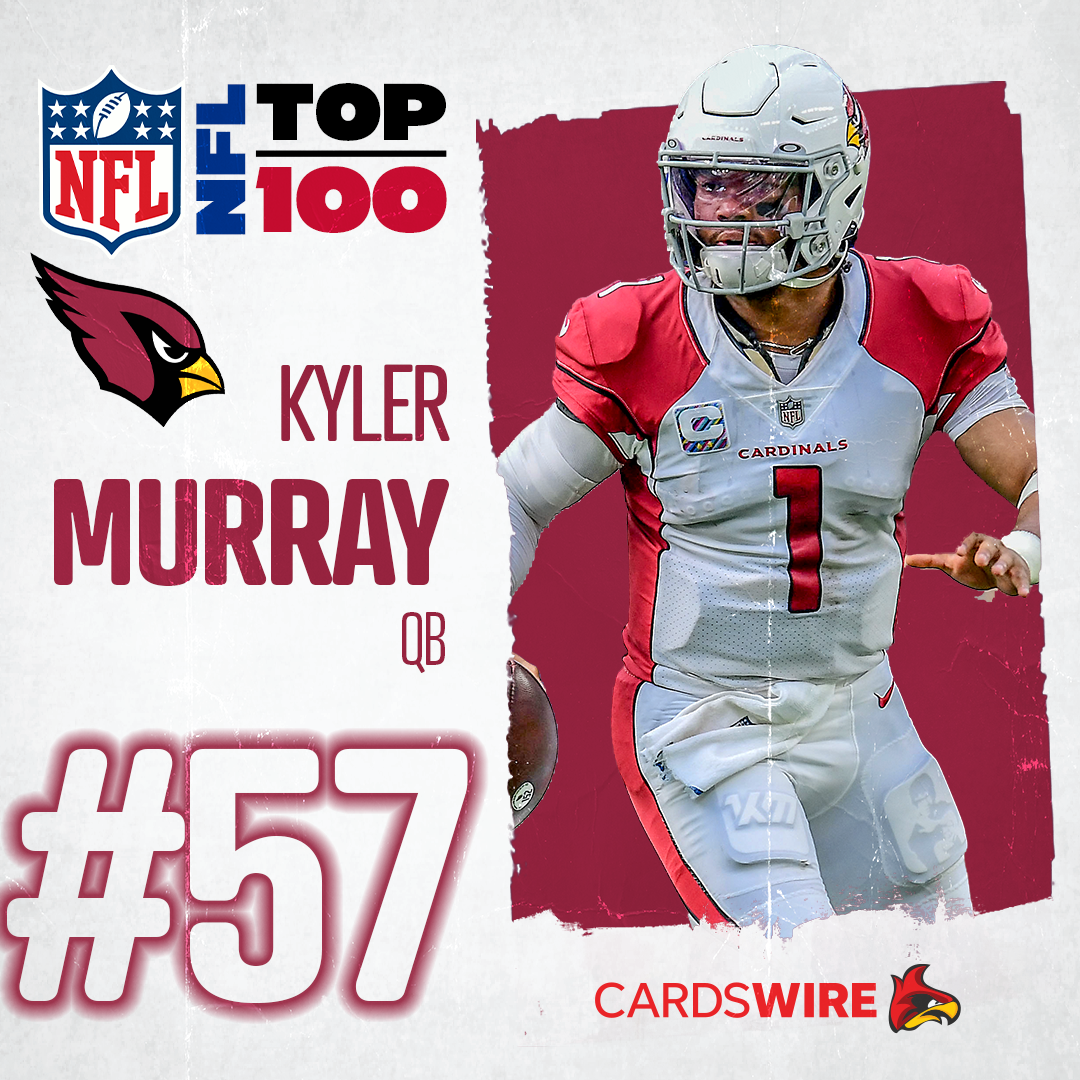 Arizona Cardinals quarterback Kyler Murray, now one of the highest-paid players in the NFL, was again included in the yearly NFL Top 100 Players series for the 2022 season.

NFL players voted and Murray came in at No. 57 this year.

The focus of the players who spoke about him was on his ability to run and move around, but then the focus shifted to his ability to throw the ball for velocity, distance, accuracy and with a lightning-quick release.

Murray led the Cardinals to 11 wins and the playoffs and made his second straight Pro Bowl. He is on the cusp of being one of the very best quarterbacks in the league.

Many NFL players have high praise for the Cardinals’ stud safety. 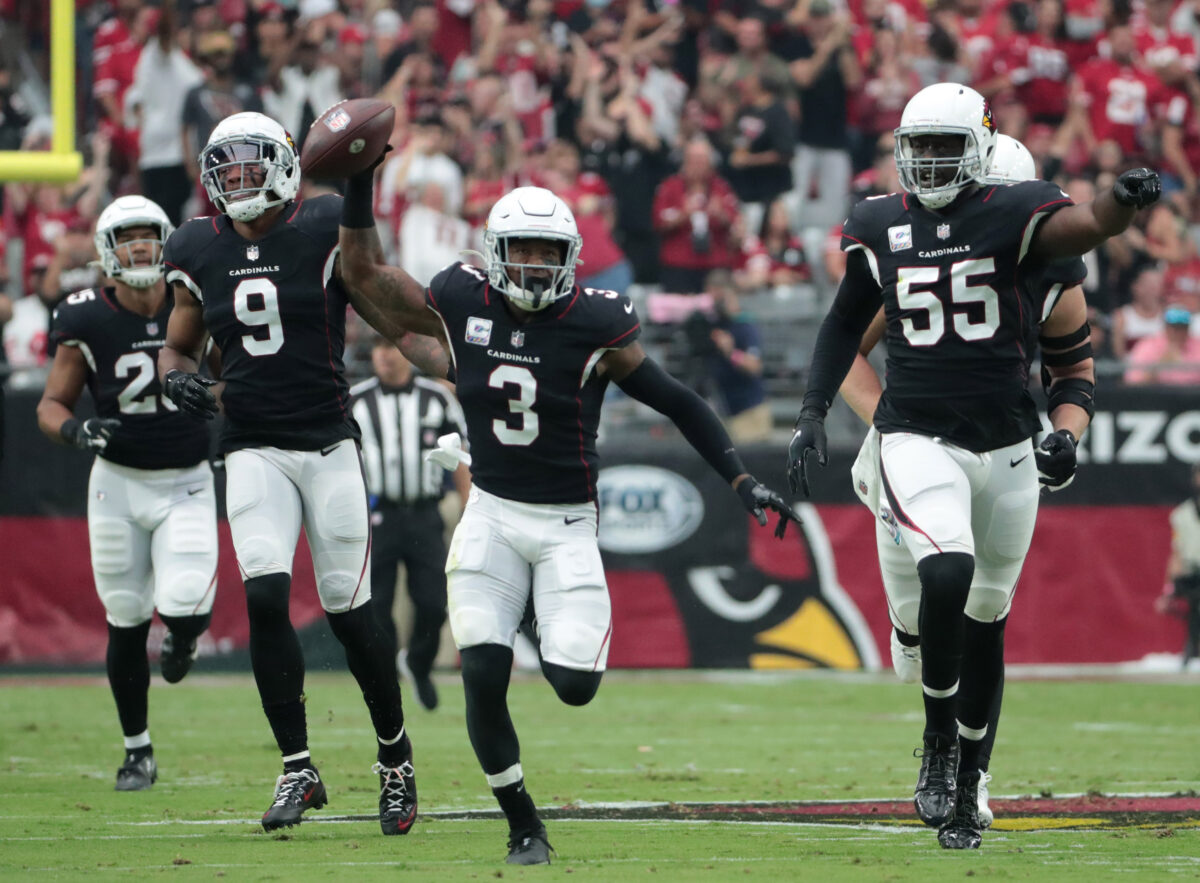 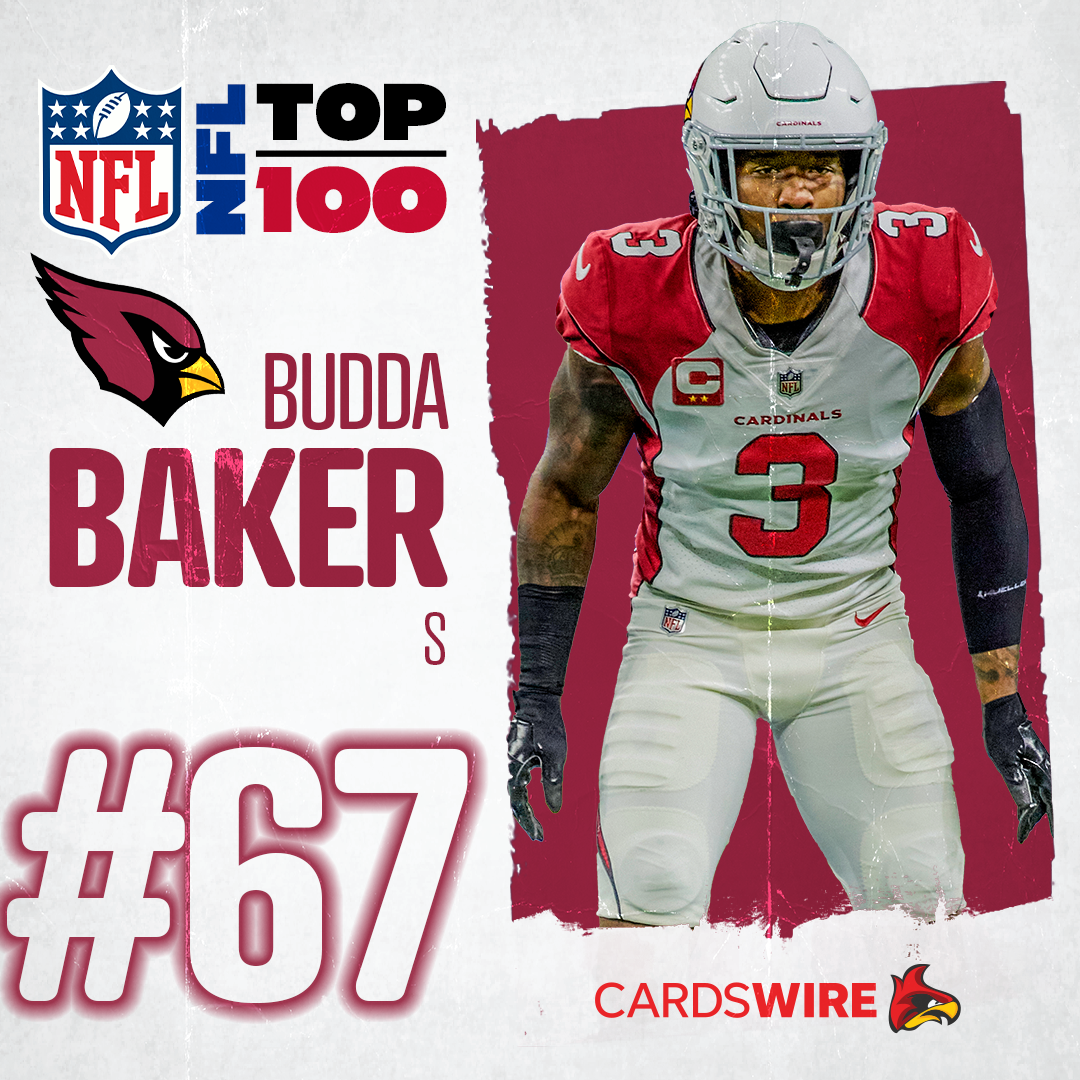 The Arizona Cardinals and their fans know how great safety Budda Baker is. By the Pro Bowl and All-Pro selections, it seems the rest of the league knows, too, even if some more analytical sites fail to recognize his impact on games.

His NFL peers recognize it and he comes in at No. 67 of the NFL Top 100 players that players vote on each year.

Former teammate Chandler Jones, now with the Las Vegas Raiders, opened the video reveal by calling him “a heat-seeking missile.”

He gets praise from a number of teammates and opponents.

“He’s a blur out there. He just does everything 100 miles per hour.”

“It’s the no hesitation. Because you’ll see him 15 yards deep and he’ll make the tackle at five yards.”

“He’s a really smart football player. He’s always in the right place in the right time. Budda is one of my favorite players in the league.”

From Denver Broncos quarterback Russell Wilson, who as a member of the Seattle Seahawks saw him twice yearly, said this:

“He’s one of the most explosive players in the league. He’s smaller, undersized. Budda’s smaller than me. He’s a force. He comes out of that center field and comes down full speed. He’s trying to take your helmet off and he’s trying to blow you up.”

“I’ve never seen a player play with such reckless abandon.”

“I tell him every time I love playing him because he makes you bring it over and over.”

“He’s like a missile and then the pop-up game is everything at the end. The way he comes down and fills the run, he’s coming and he’s coming low, and he’s coming to wipe you out. He has no fear when he’s coming down and he’s shooting right for that thigh board. You better be ready because if you aren’t, it’s going to hurt.”

“He really attacks everything 100% full speed. He’s just a fantastic tackler. I’ve seen him take people down from up top. I’ve seen him take the legs out. A honed-in reckless. He knows how to control it on Sundays and this year he’s turning it into picks.” 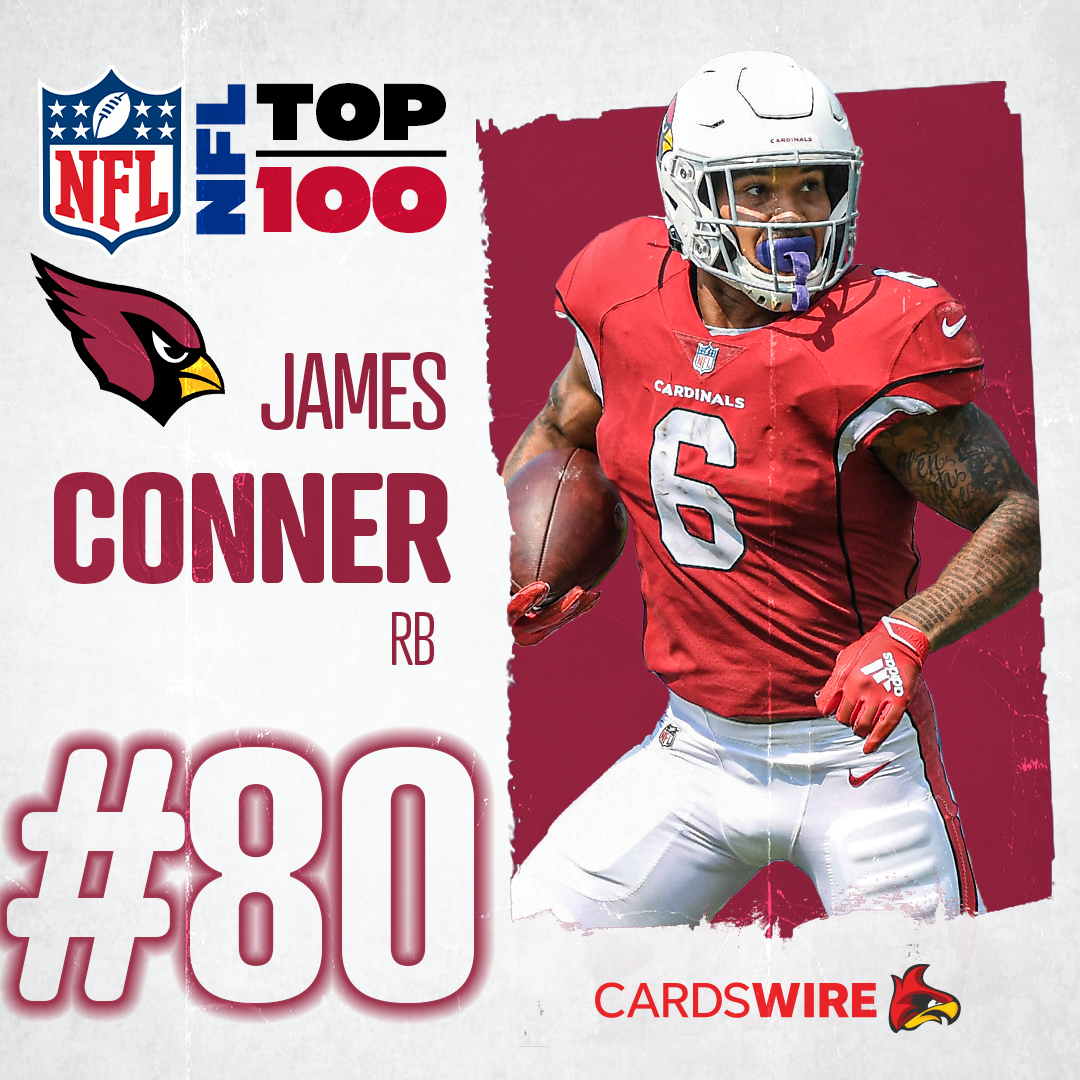 The yearly NFL Top 100 Players is back this offseason on NFL Network. Three Arizona Cardinals were revealed as making the top 100 among players 51-100.

The first revealed was running back James Conner, who debuted on the list at No. 80.

He had a career-high 18 touchdowns last season and more than 1,100 yards from scrimmage. He was one of the Cardinals’ four Pro Bowlers.

Former Cardinal Chandler Jones had a lot to say about Conner in the video about his selection.

Conner’s battle with cancer while in college was mentioned but he made the list this year because of his play in 2021.

Jones admires him on and off the field.

“When you have a power back like that, it’s very intimidating,” Jones said. “Even with a defensive end like me, you don’t want to tackle that. I don’t want to tackle James Conner. The guy has legs like tree trunks. And to see what he does, it reminds you of what Derrick Henry does with his stiffarm. You just don’t want to stick your face in that. It just doesn’t seem safe.”

Conner re-signed with the Cardinals on a three-year contract and is Arizona’s No. 1 back this coming season.

They are counting on him  to duplicate a lot of what he did for them last season.

The Arizona Cardinals must cut five players from their offseason roster by Tuesday. They announced those moves Sunday afternoon.

Keke’s release is perhaps the most surprising, but he had missed time under COVID protocols and did not play in the preseason opener.

Borders played a little last season and was a long shot to make the team.

Both Keke and Borders have been in the league a little while, getting released now might improve their chances of landing with another team.

Long and Rivers were undrafted rookies.

Ndubuisi is also a surprise, as he was an international player and had $207,000 of his salary fully guaranteed.

NFL teams must cut their rosters down to 85 players by Tuesday afternoon.

Arizona has 86 players on the roster but have an exemption for international tight end Bernhard Seikovits. They do not need to make any other moves before Tuesday.