The Browns had a horrible outing against the Steelers. Blame an abysmal offensive line performance before you point fingers at Baker Mayfield. 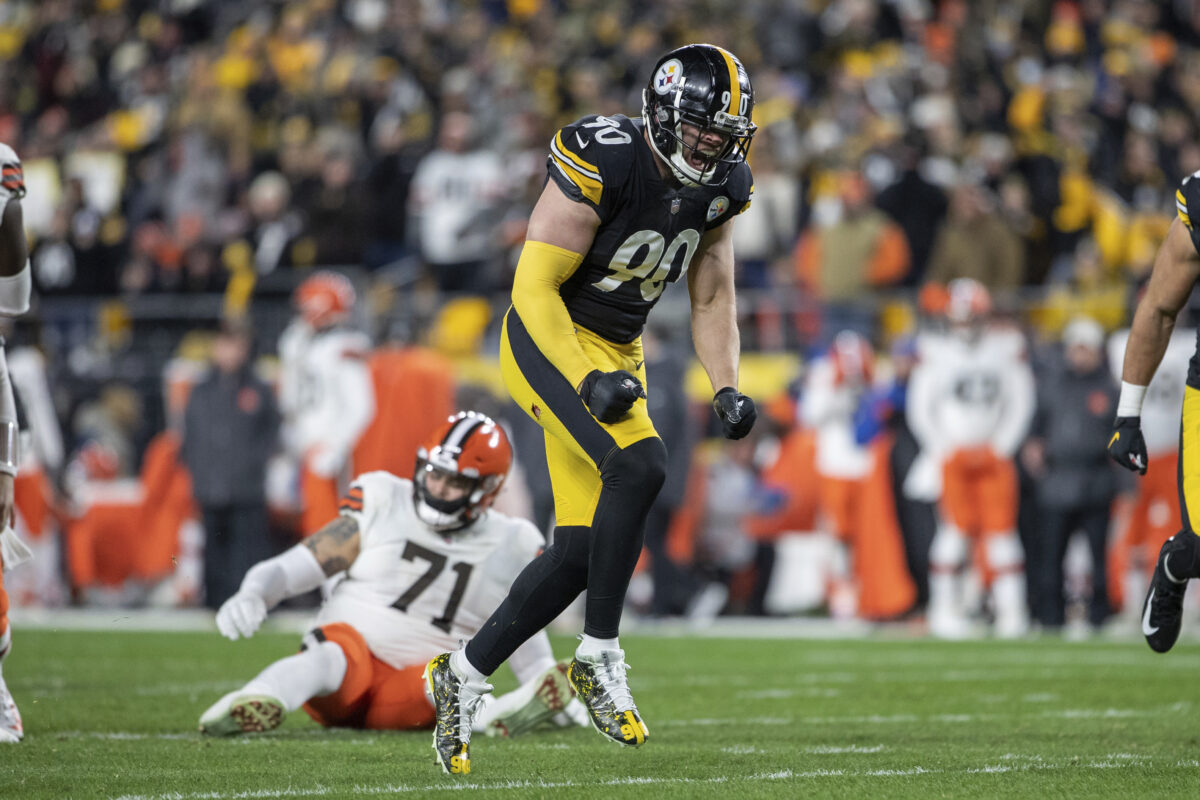 When a quarterback has a disastrous game, the fault formula for that disaster is generally part quarterback, part receivers, and part offensive line. Football is the ultimate team sport, and no horrible outing is usually one person’s fault.

In the case of Baker Mayfield and the Cleveland Browns against the Pittsburgh Steelers on Monday night, it was everybody’s problem. In a 26-14 loss, Mayfield completed 16 passes on 38 attempts for 185 yards, two touchdowns, two interceptions, nine sacks, and a passer rating of 53.1. We’ve discussed at length all the issues with Cleveland’s offense this season, and generally speaking, we’ve let the offensive line off the hook. But we can’t do so in this case.

Yes, Mayfield had some errant throws. Yes, his receivers dropped passes. But the primary instigators of this particular offensive malady were the five guys up front. Steelers edge-monster T.J. Watt racked up four sacks, mostly against overwhelmed right tackle James Hudson, but Hudson wasn’t the only problem, and Mayfield brought that up after the game.

“I’m not going to get into too many details about that as a full season evaluation,” the quarterback said when asked about the round-robin at the right tackle position due to injury. “We’ve, obviously, been pretty banged up. I believe in James — I pray to God you guys don’t spin this into something where I’m criticizing James Hudson. That’s not what I’m doing. We’re talking about an All-Pro that he’s going up against and he hasn’t had very many starts. So I’m proud of James. He kept swinging, he kept fighting.

“Now, when it comes to, what we’ve had to deal with all season, there’s been a lot of ups and downs. You know, do I believe I can play better? Absolutely. Do I believe there’s better that we as an offense could have been put in that are better? Absolutely. There’s so many critiques throughout the year, if there wasn’t, we wouldn’t be sitting here at 7-9. So, it is what it is.”

Was Hudson a problem? Absolutely. Was he the only problem along the front five in this game? Absolutely not. Everybody on that line, including and especially guards Joel Bitonio and Wyatt Teller, who in most weeks could be called the NFL’s best guard duo, had games they’d like to forget.

We’re going to spend all kinds of time this offseason discussing Mayfield’s future, and whether he’s the best quarterback option for the Browns, but this whomping wasn’t nearly as much Mayfield’s fault as some might prefer to believe.

Baker Mayfield looked more like Santa Claus as he gifted the Packers three interceptions in the first half. 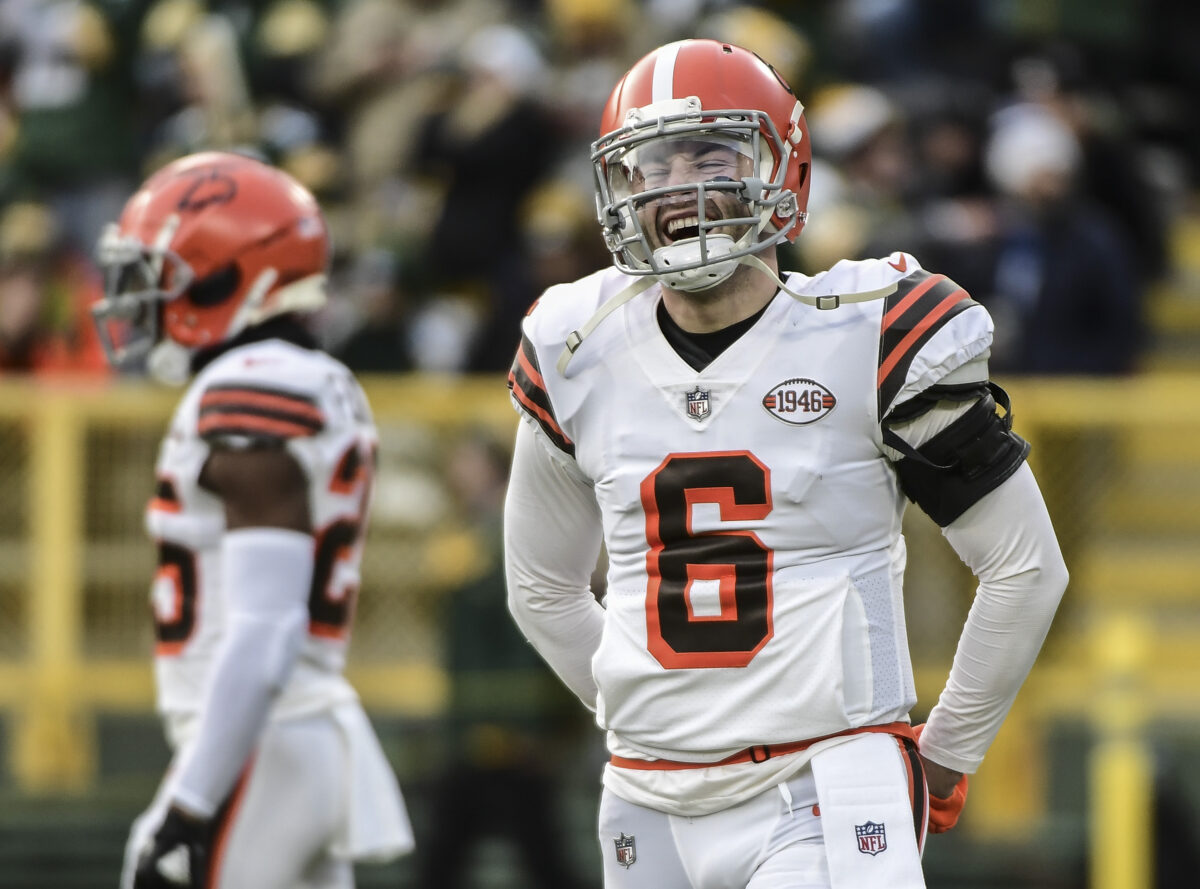 With the Cleveland Browns playing on Christmas evening, quarterback Baker Mayfield seems to be in a giving mood.

The Green Bay Packers are more than willing to accept his offerings.

After scoring on the first possession of the game to take a 6-0 lead, the Browns forced a Green Bay punt and began their second drive deep in their own territory. The possession lasted a single play:

Mayfield, working off play-action, tests the Packers defense over the top with a deep shot to Donovan Peoples-Jones. But safety Darnell Savage is in position to snare the pass, giving the Packers possession at midfield.

Green Bay’s drive would culminate with Aaron Rodgers hitting Allen Lazard for an 11-yard touchdown pass, becoming the franchise’s all-time leader in touchdown passes as he inched ahead of Brett Favre.

Cleveland trailed at this point 7-6, but Mayfield was still feeling generous rather than dangerous. He drove the Browns down into Green Bay territory, but with Cleveland facing a 3rd and 19 at the Packers’ 24-yard line, he tried to drive this throw to Jarvis Landry:

.@packers secondary with their second INT of the night! 🎁🎁 #GoPackGo

Of note here is Mayfield’s footwork. His drop is unsettled, and he drifts backwards at the release point rather than finishing through his front foot. Yes, there is a bit of pressure in his face, but he has enough room to drive through his front foot. Instead he tries to hit this off his back foot, and the pass sails high and into the hands of Chandon Sullivan.

What did Green Bay do on this second gifted possession? Ten plays later the Packers were back in the end zone, with Rodgers hitting Davante Adams for the go-ahead touchdown.

To his credit, Mayfield guided the Browns to the end zone on their next drive, hitting tight end Harrison Bryant on a short touchdown. But after Cleveland defense forced a three-and-out from Rodgers — and just as Browns fans were perhaps seeing their blood pressure level out — Baker Claus struck again:

Rasul Douglas continues to be an unbelievable pickup for the @packers. 🙌 @rd32_era

On this play it seems that head coach Kevin Stefanski tries to sprint Mayfield out to the left, and the quarterback tries to hit Landry on a vertical route. But Rasul Douglas breaks on the pass, which is behind the intended target, and the Packers have the football again.

As with the two previous interceptions, Green Bay finished their ensuing drive with a touchdown.

Mayfield finished the half completing 11 of 16 passes for 146 yards, a touchdown and the three interceptions. With Cleveland’s playoff hopes hanging in the balance, Browns fans better hope that Mayfield looks less like Baker Claus, and more like the Grinch, in the second half. 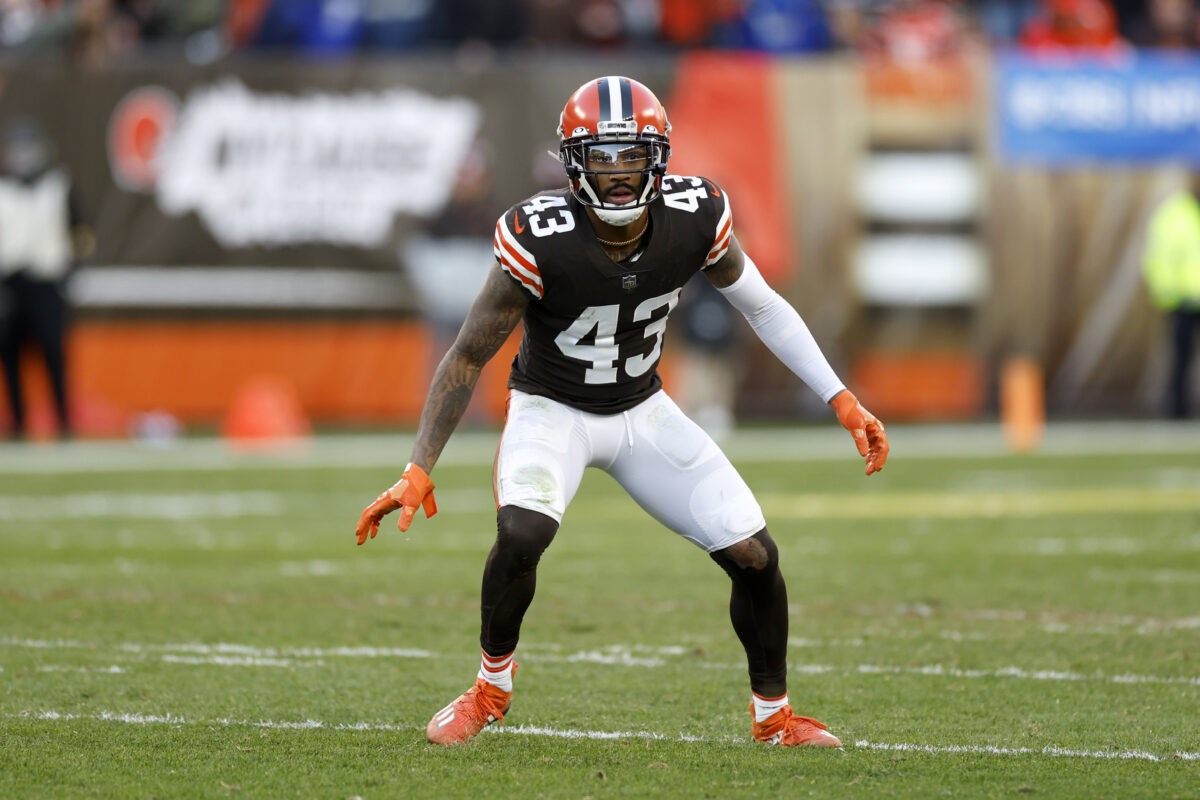 Cleveland Browns DB John Johnson III was out of Saturday’s game with the Green Bay Packers due to a hamstring injury.

That could have been one of the reasons Aaron Rodgers was dissecting the Cleveland secondary.

Johnson, though, was too busy tweeting about what he didn’t want his team to do to notice.

In a first half that saw Baker Mayfield throw three interceptions, Johnson offered some advice for what the Cleveland game plan should be.

Hint: It did not involve throwing the ball.

Rasul Douglas continues to be an unbelievable pickup for the @packers. 🙌 @rd32_era

.@packers secondary with their second INT of the night! 🎁🎁 #GoPackGo 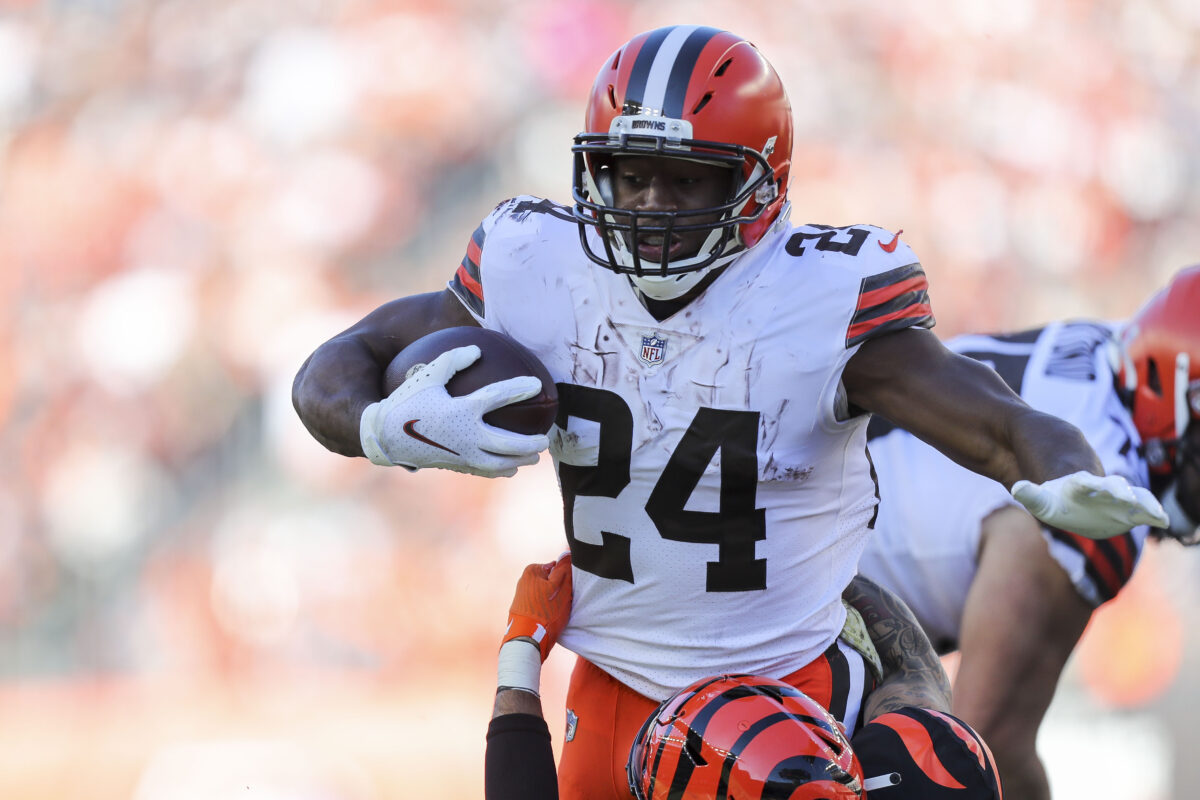 That is more like it in the AFC North.

The Cincinnati Bengals came into Sunday ahead of the Cleveland Browns in the standings.

That was surprising and led many to wonder if things had changed in the division.

They haven’t as of midway through the third quarter.

The Browns were ruling their fellow Ohio NFL team in dominating fashion.

The most recent example was Nick Chubb breaking a run for 70 yards and six points.

The PAT gave Cleveland a 31-10 advantage.

The call on Cleveland Browns’ radio:

And a different look: 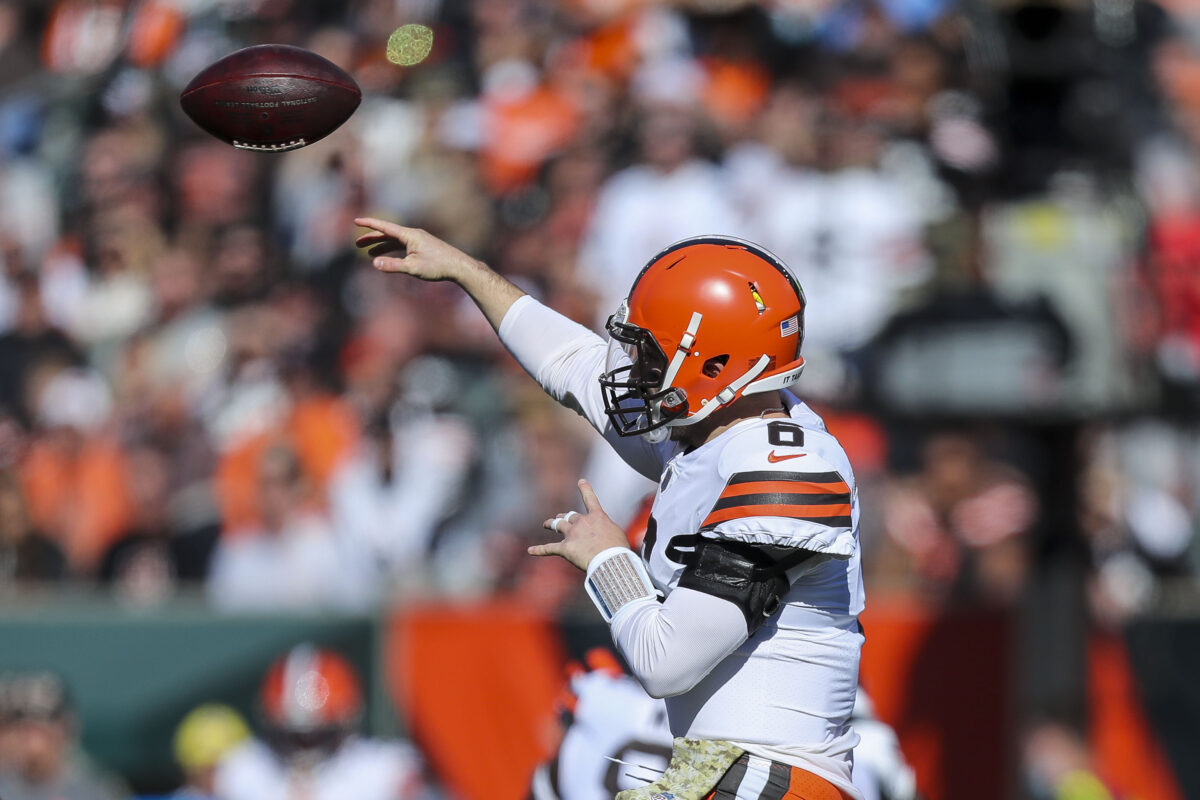 Baker Mayfield had no trouble finding this wide-open receiver for the Cleveland Browns.

After a week of controversy and turbulence due to Odell Beckham Jr., the Browns’ quarterback hit Donovan Peoples-Jones with a 60-yard touchdown pass in the second quarter.

The score opened the Cleveland lead to 21-7.

Mayfield was off to a hot start, hitting 7 of his first 8 passes for 121 yards and the score. 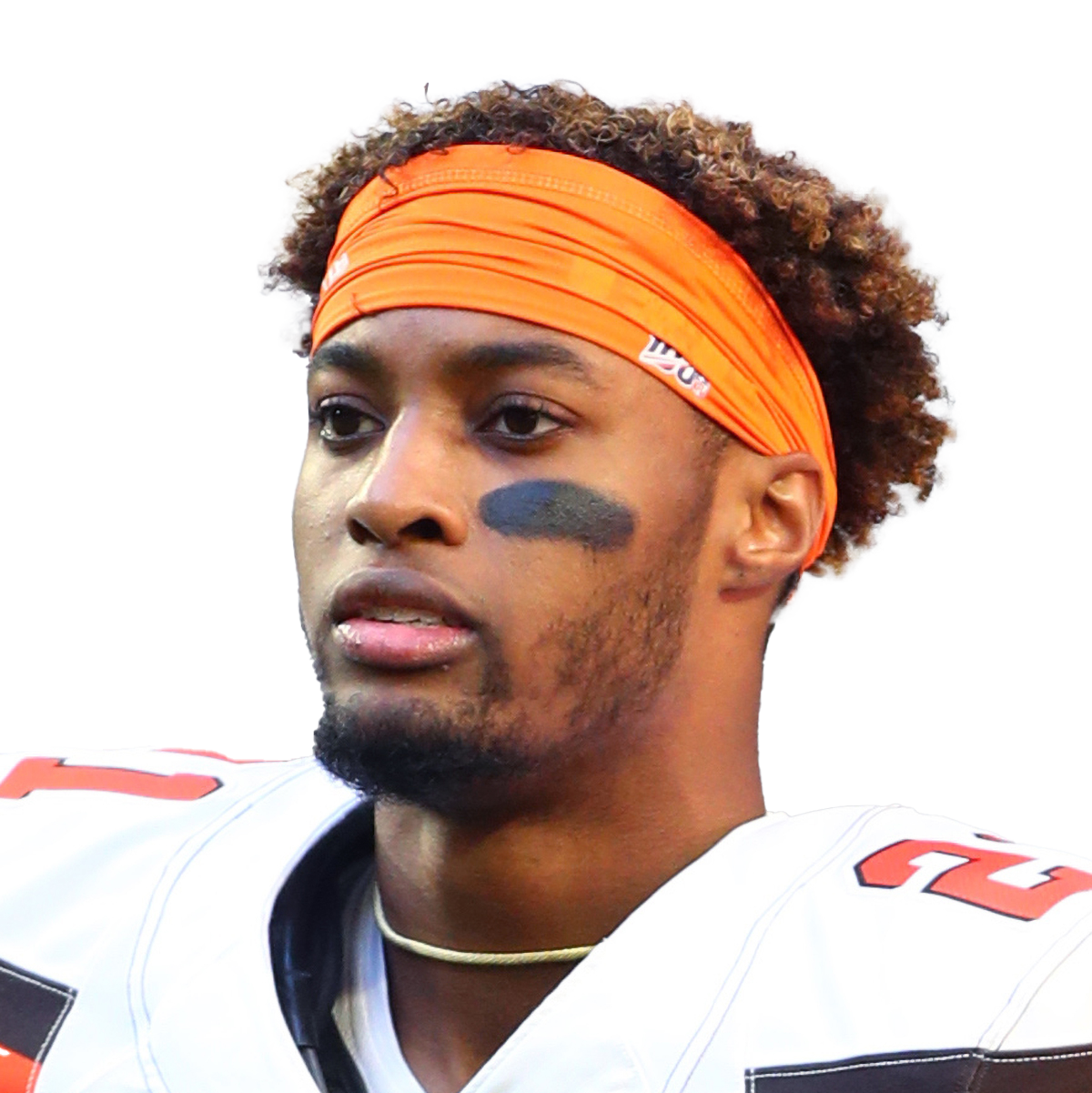 Denzel Ward went against Joe Burrow from 2015-2017 in practices at Ohio State.

The Cleveland Browns’ DB used some of what he learned Sunday against the Cincinnati Bengals’ QB.

Watch as Ward reads Burrow perfectly and jumps the route for an interception that turns into a 99-yard pick-six.

The play gave the Browns a 7-0 lead after the PAT. 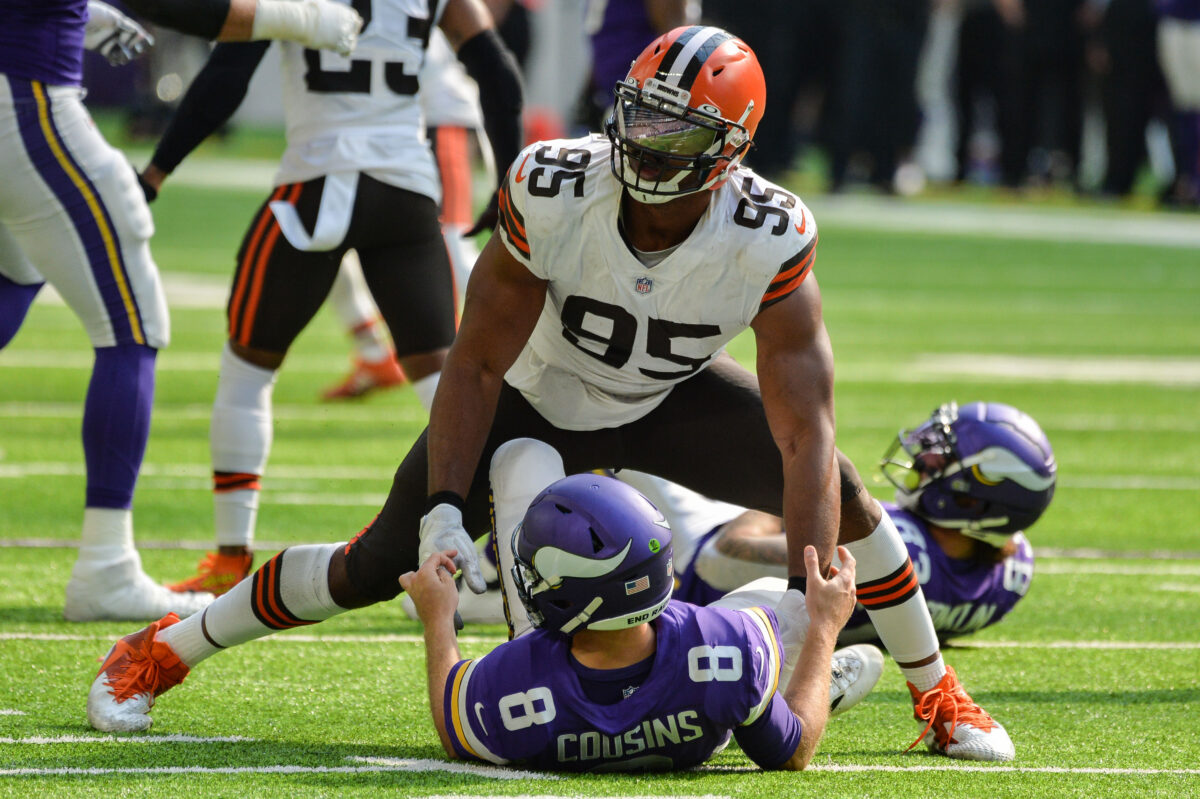 Garrett, the Sack Reaper, had a cloak on as part of his outfit. On the back of it was the name of every quarterback he has sacked.

He already had notched the Steelers’ Ben Roethlisberger so that name won’t be added if he ups his current league-leading total of 9.5 sacks.

Overall in his career, Garrett came in with 52 sacks.

.@Flash_Garrett is the Grim Reaper. 💀

He listed all the QBs he sacked on his back. 😅 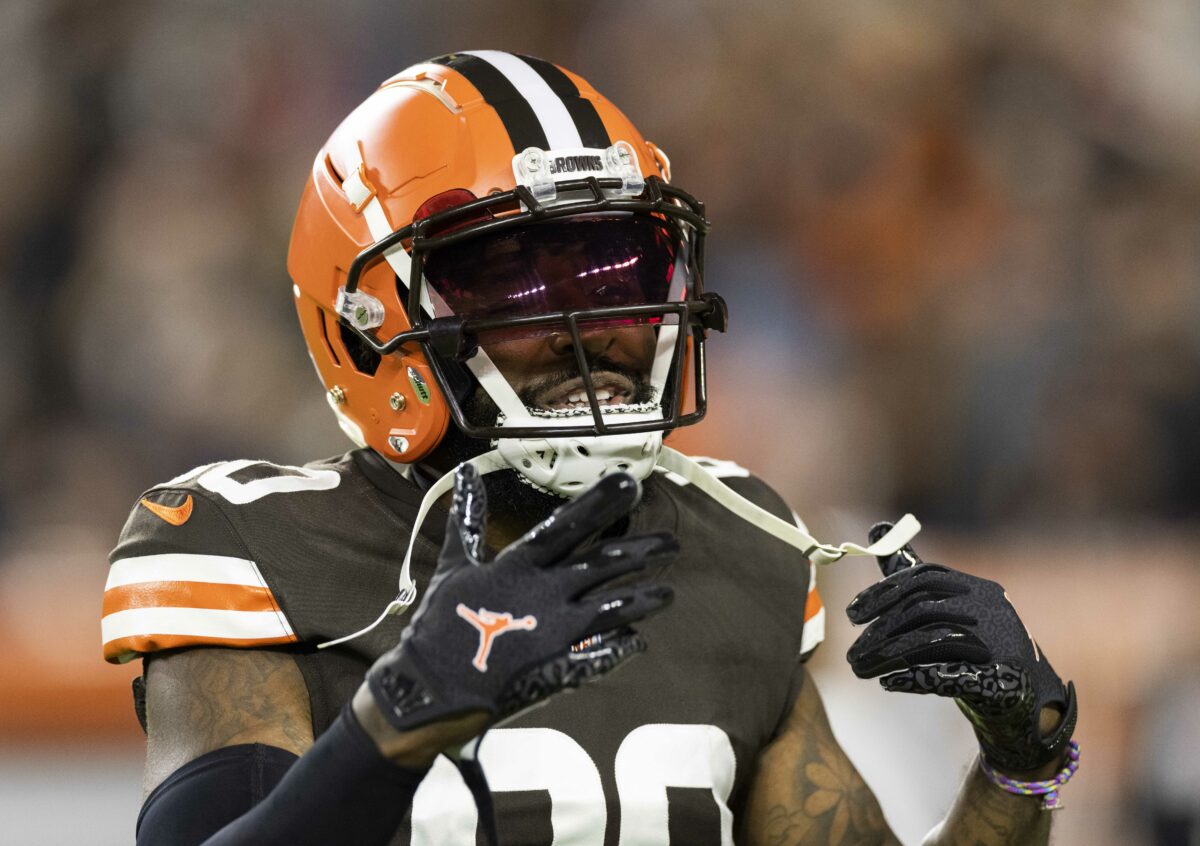 Jarvis Landry returned to the Cleveland Browns’ lineup on Thursday for their game with the Denver Broncos.

Landry, a five-time Pro Bowler, had appeared in two games this season and caught six passes for 80 yards while adding two rushes for 13 yards and a touchdown.

He went on IR with a knee injury on Sept. 21 and was designated for return on Oct. 15.

It did not take long for Landry to have an impact.

Check out the wonderful catch he made in the first quarter, bobbling the ball but remaining focus and pulling it in to his body.

Jarvis Landry hangs on for the third down conversion. #Browns @God_Son80

A little later in the quarter, the Broncos’ Courtland Sutton made a pretty fair catch of his own,  good for 31 yards.

Baker Mayfield has a fractured shoulder 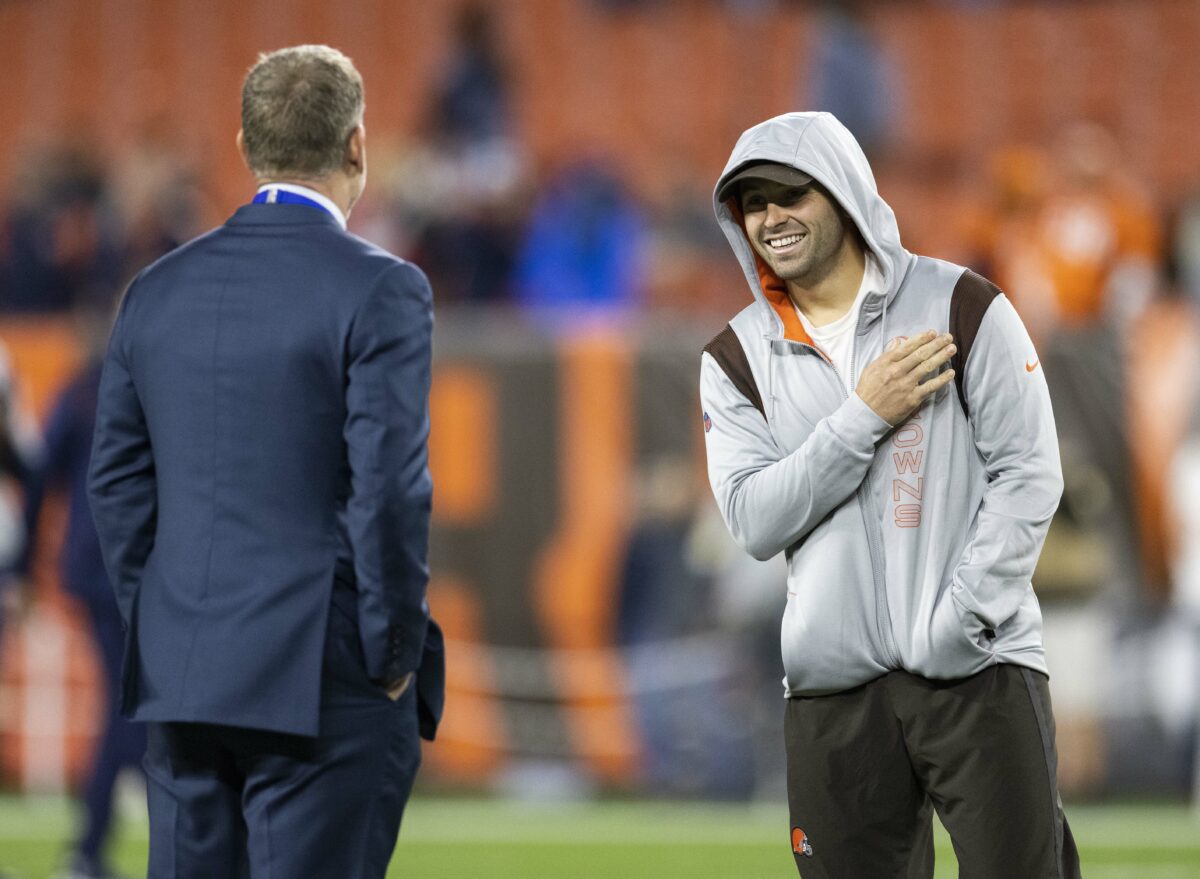 The Cleveland Browns were playing on Thursday night Football in Week 7.

The quarterback told FOX Sports’ Jay Glazer prior to the game against the Denver Broncos he has a fractured shoulder in addition to the other injuries keeping him sidelined.

The injury is called tuberosity, which is top of humerus. Once that heals he can come back, he’s hoping he’s back for their next game, reported Glazer.

“I need that fracture to heal for me to get back out there,” he said.
When his shoulder popped out, it fractured the bone @NFLonFOX

In Mayfield’s absence, Case Keenum started against one of his former teams, Denver,

Mayfield suffered the torn labrum in Week 2, but aggravated the injury again in Sunday’s loss to Arizona. After Cardinals defensive end J.J. Watt drove Mayfield’s left shoulder into the turf, he stayed down for several minutes before coming back in to finish the game. 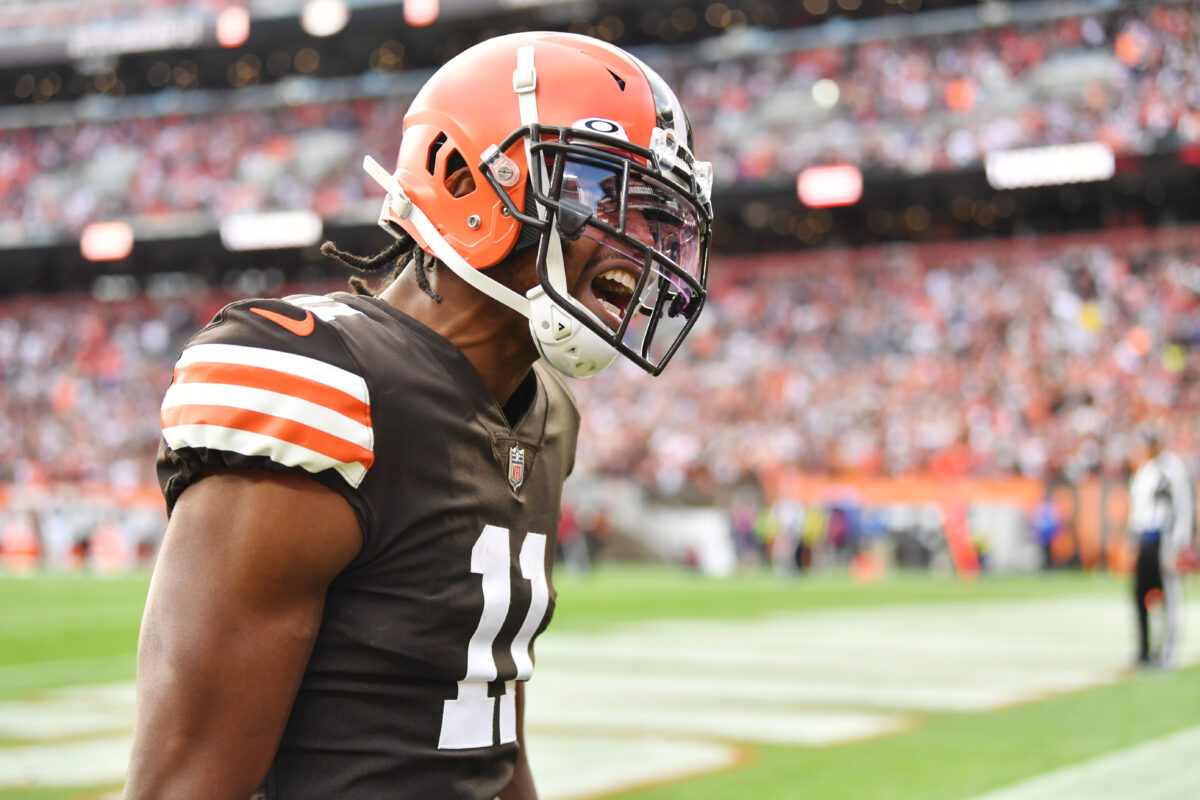 The Cleveland Browns desperately needed a boost Sunday as the first half was coming to a close against the Arizona Cardinals.

Baker Mayfield to the rescue.

In a battle of Oklahoma Heisman Trophy winners, Mayfield came up with the Hail Mary against the Cardinals.

Mayfield is able to buy time while trying to his receivers in the end zone.

The pass is lofted and comes down in the arms of Donovan People-Jones.

The Cardinals’ Heisman winner, Kyler Murray, had thrown a pair of touchdown passes.

And another angle of the play:

WHAT A THROW. WHAT A CATCH 😱@bakermayfield | @dpeoplesjones | @Browns