Despite an aging quarterback, a rookie running back, and a questionable line, the Pittsburgh Steelers have finally begun to find their offensive identity. 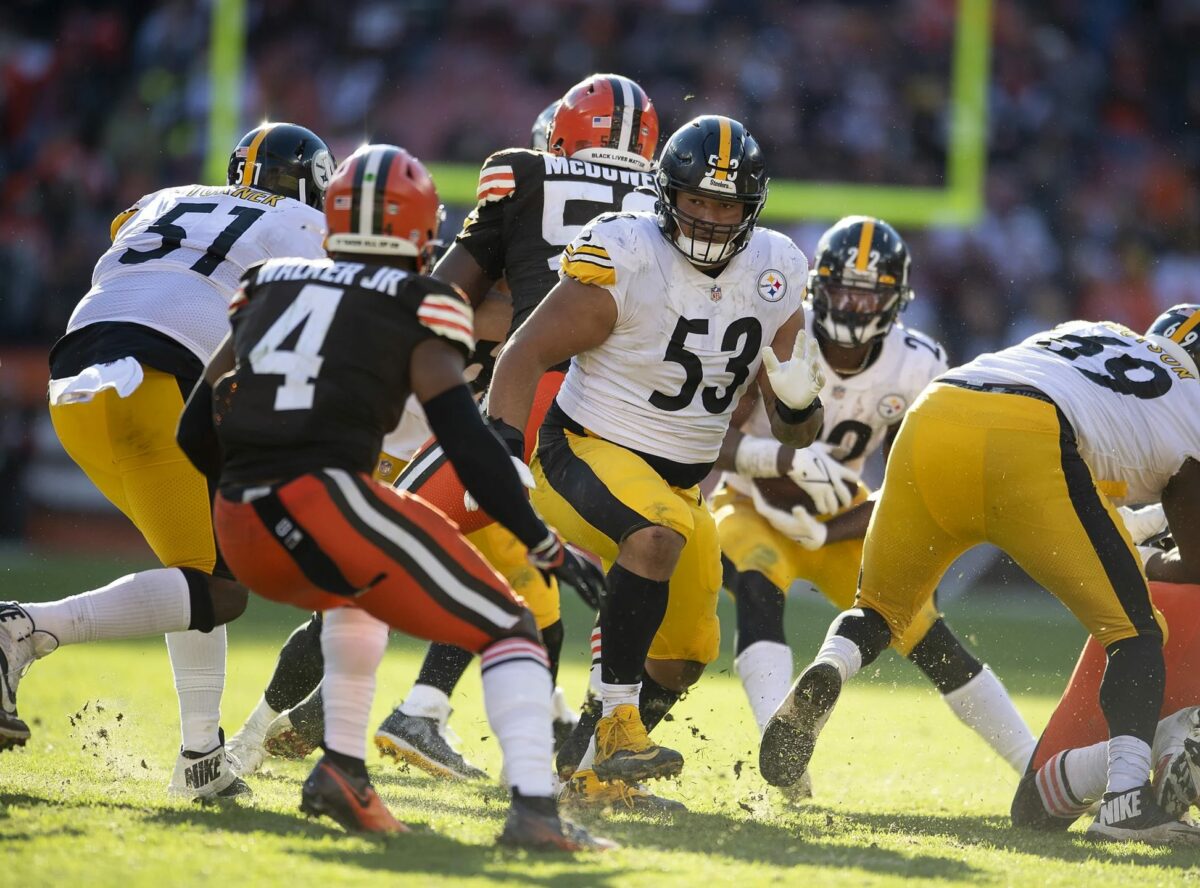 The Pittsburgh Steelers have finally begun to find their offensive identity. For all the offseason talk of a supposedly weak offensive line, an aging quarterback and rookies at skill positions, things are starting to click in ways not even Steelers’ superfans could have imagined.

And it’s all starting with that so-called weak line.

With the exception of a handful of mistakes by young guys still finding their way, this offensive line has been the source of the Steelers’ offensive success. They struggled early and struggled often, but as we approach the halfway point of the season they’re finding their form and playing to their potential. Their mistakes are becoming fewer, their successes are more regular. In turn, the Steelers have returned to their run-first approach, opening up things in the air for their 39-year-old quarterback.

There’s still plenty of room for improvement, but it’s worth celebrating when they do things they wouldn’t have even come close to sniffing through the first few games. Like this progression:

This OL completely kicked ass on Sunday in the running game. What a rep. pic.twitter.com/qRMiRsaIw9

They moved as a unit. They didn’t back down. They created holes for Najee to exploit. He did just that.

Harris had 26 carries for 91 yards and a rushing touchdown. That would not have happened if the line hadn’t set up Harris, even if the rookie has been a behemoth of a back in his rookie year.

And that’s all before taking into account the contributions from Diontae Johnson:

Whew, this route by Diontae Johnson. Sell vertical, break down, runs the cornerback off. Becoming one of the league's better route runners. #Steelers pic.twitter.com/jmzM3Fthpr

Even more notably, tight end Pat Freiermuth was a beast:

PAT FREIERMUTH ON FOURTH DOWN FOR THE LEAD 🤯🤯🤯pic.twitter.com/cVQwqAWpfJ

There will continue to be growing pains for this offense. But they are certainly trending in the right direction at the right time. And if they can keep heating up despite the winter weather, they may still have some playoff-push left in them.

A burning question heading into the Steelers preseason tilt vs. the Eagles is how much game-action Najee Harris will see. 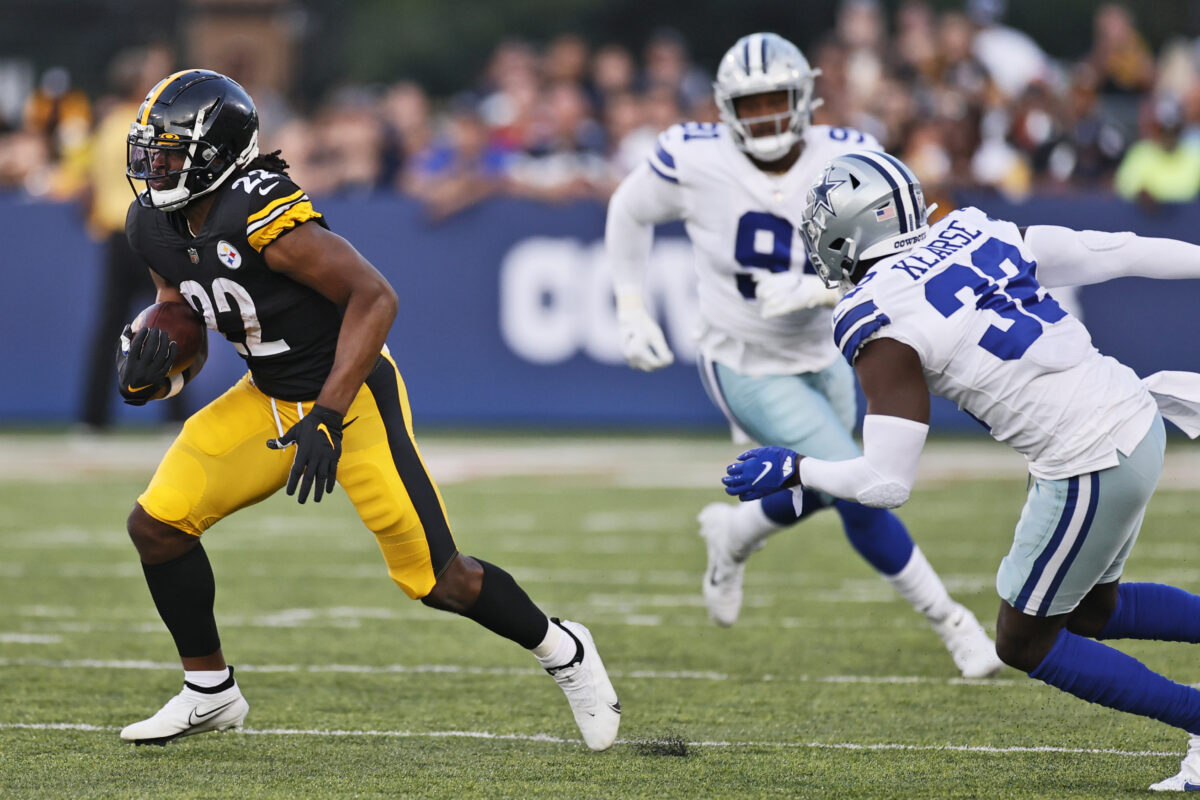 A burning question heading into the Pittsburgh Steelers preseason tilt versus the Philadelphia Eagles tonight is just how much game-action rookie running back Najee Harris will see.

Steelers head coach Mike Tomlin is easing his players into things, as exhibition games are really only good for.

Harris won’t get much more work in Philadelphia than last week in his first professional outing. In the Hall of Fame Game showdown with the Dallas Cowboys, Harris ran the ball seven times for 22 yards. He also had one reception for three yards. By their second possession of the second quarter, the Steelers’ reserves were in the game.

Next week, back at the confines of Heinz Field against the Detroit Lions, will be a different story. Week 3 is known in the NFL as the “dress rehearsal,” so you can expect Najee Harris to get a bulk of the carries.

Steelers fans who are new to the work of Najee Harris are in for a show come September. 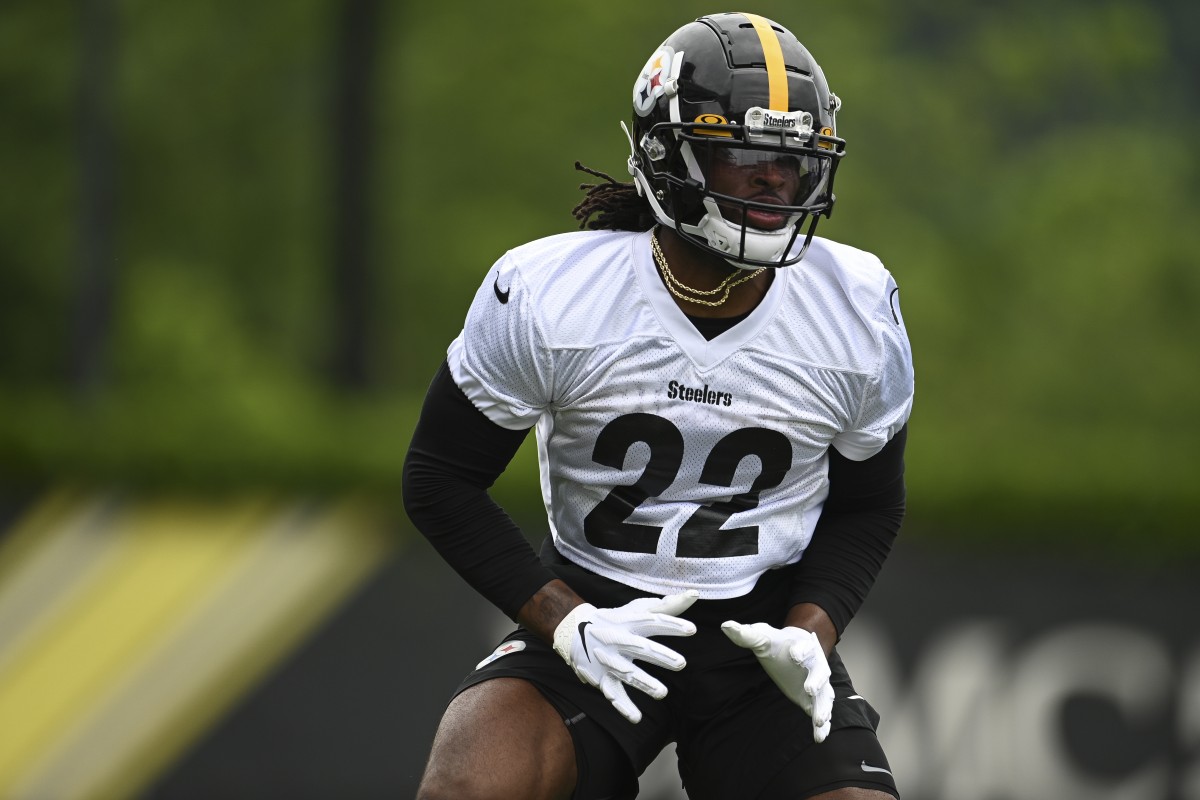 Steelers fans who are new to the work of Najee Harris are in for a show come September.

Harris is just what the (football) doctor ordered — a natural talent who should not have any trouble living up to his draft spot; maybe even then-some.

Steelers former running back Merril Hoge recently broke down film of the new Steelers running back and answered what every fan wants to know: Will Harris’ skillset translate from college to the pros?

That answer is a resounding yes.

And it’s not because of Harris’ size; that’s not what makes him unique. After all, in his playing days, Hoge was nearly identical to Harris’ 6-foot-2, 230-pound stature. But the average height for a running back is 5-foot-11, so Harris’ size is definitely special.

It’s about what he can do with that size that makes Harris unique.

As Hoge points out, Harris’ running style offers balance, vision and patience. All attributes that will come in handy playing behind a young offensive line.

Goals are always good, and rookies set plenty of them. For Najee Harris, a big one is working toward a leadership role with his new team. 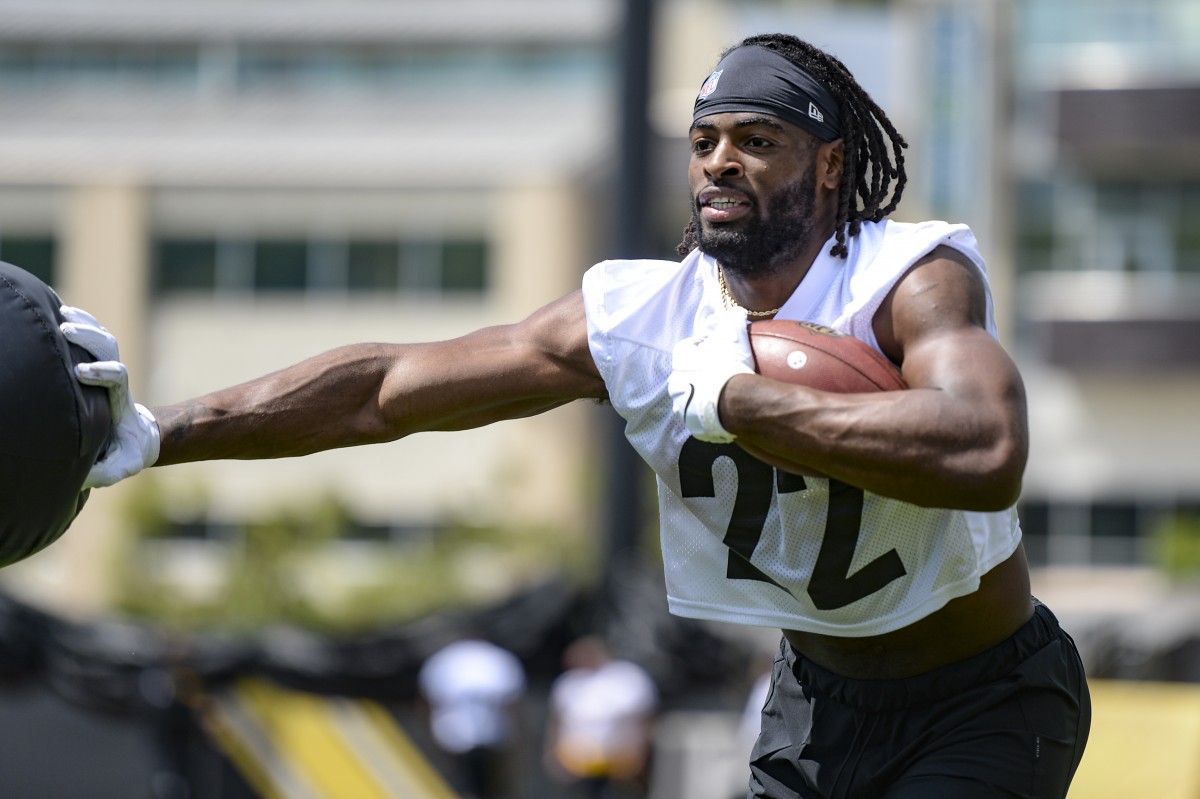 Goals are always good, and rookies set plenty of them. For Najee Harris, a big one is working toward a leadership role with his new team.

Before he gets too far ahead of himself, Harris said one important aspect he needs to get down first is the offense.

“I barely know the offense,” Harris told Teresa Varley of Steelers.com. “The veterans aren’t here. I haven’t met them. Trying to move at a fast pace, it’s always about taking things step by step by step.”

Once a leader with the Crimson Tide, Harris knows that the more experience he gains in Pittsburgh, the leadership role will come naturally “in time.”

“When it comes that time to become a leader, then it is,” Harris said. “It’s not something I am thinking about. It’s just learning the offense, my teammates, that type of person they are bonding with them, so I can become someone they can trust and find ways to help them out if I can and from there, what happens, happens.”

Najee Harris inked a deal with the Steelers on Tuesday. 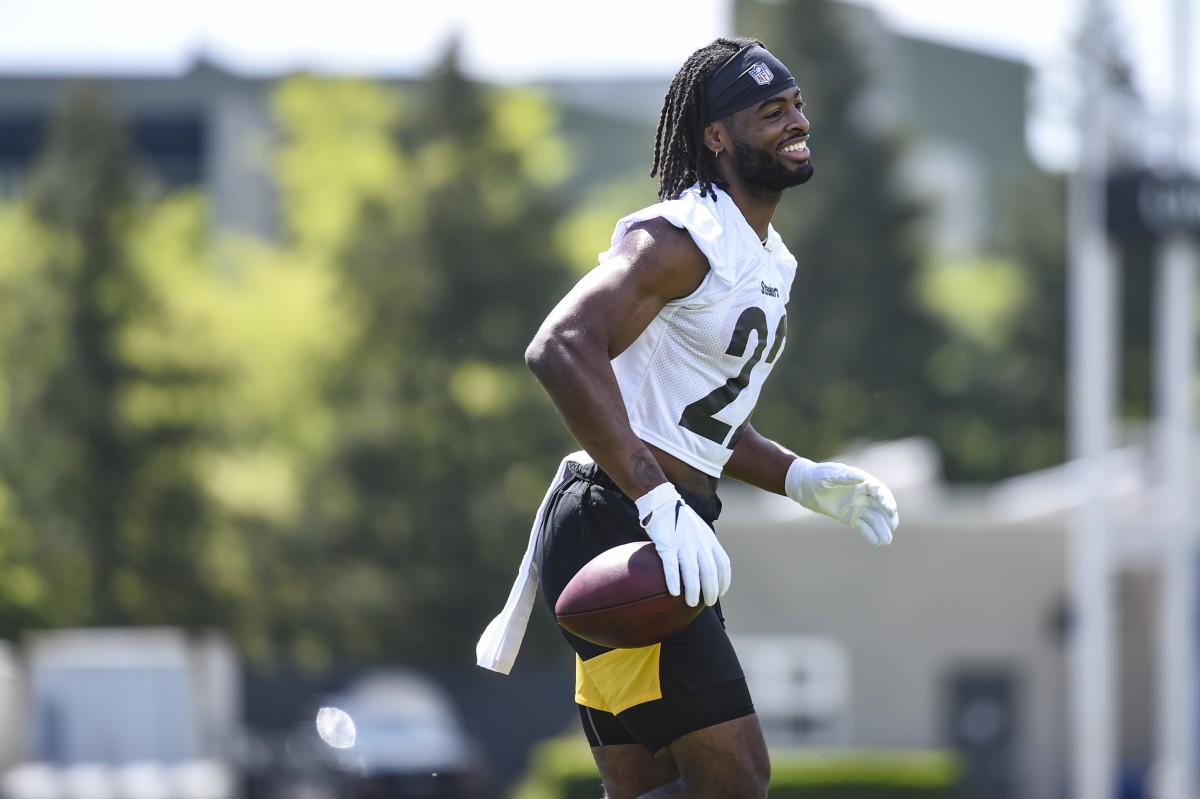 The Steelers announced on Tuesday that they’ve signed rookie running back Najee Harris.

Before being drafted by the Steelers with their first overall pick, Harris was the leader in yards (3,843) and touchdowns (57) at Alabama.

Details of the contract have not been released, but Harris will be around for at least four years with the option of a fifth year since he was a first-round selection.

If the Steelers want to keep Harris around for a while, Tomlin might consider sitting Harris down for a serious discussion. 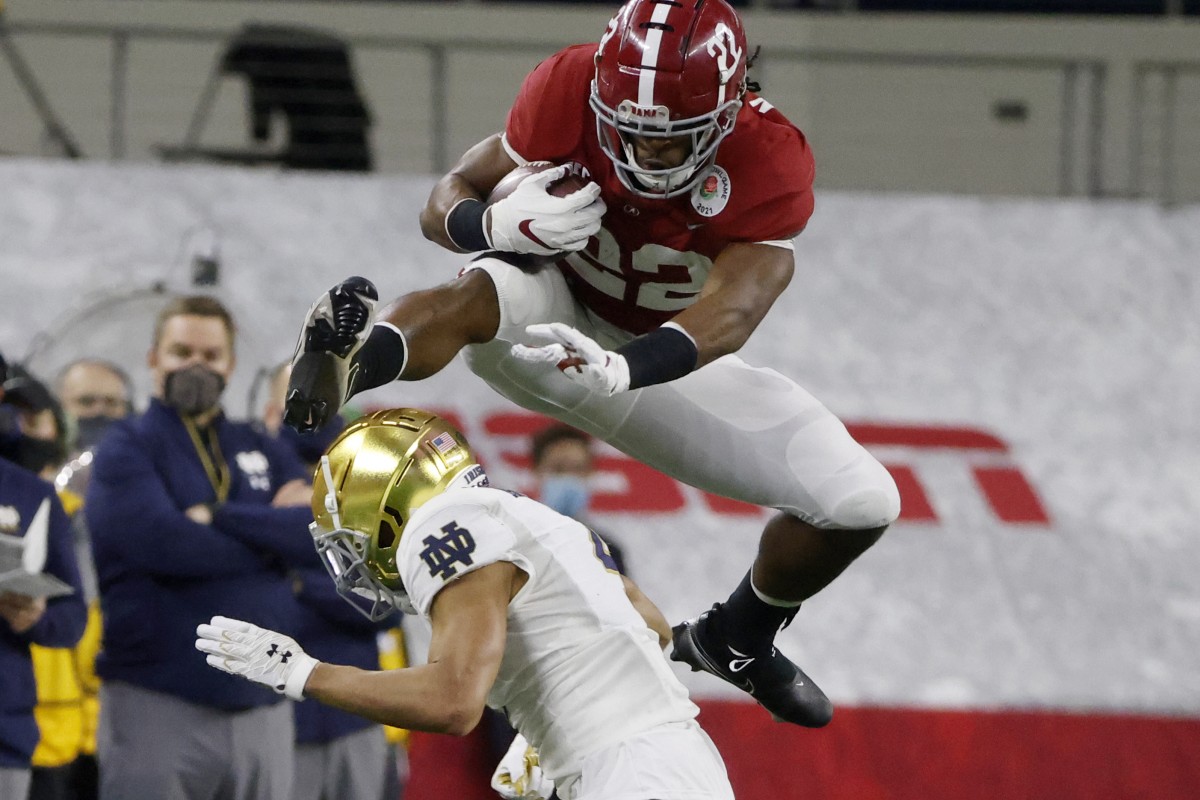 If the Steelers want to keep rookie running back Najee Harris around for a while, head coach Mike Tomlin might consider sitting Harris down for a serious discussion.

Whatever you want to call it.

It was high school when Harris first started the habit of hurdling defenders, and Hicks was not pleased.

“You can’t do that,” Hicks told her son. “We gotta figure out another way ’cause that’s dangerous. I can see somebody just catching you in the air and, oh my God, you helicoptering, spinning across the field.”

The jaw-dropping plays made for great collegiate highlights, but defenders in the pros aren’t so forgiving. Harris won’t have any legs to catapult him into the air over would-be tacklers if he keeps it up.

Tomlin and running backs coach Eddie Faulkner might consider working with their prized running back to reverse the hurdling habit this offseason.

If Pro Football Focus tracked yards-hurdled as an advanced NCAA stat, I’d bet Harris was first — and probably by a longshot.

Every Najee Harris hurdle was a work of art at @AlabamaFTBL pic.twitter.com/v4q9DcVjde

The Steelers rookie running back is in for a big payday when his contract is signed in a couple months. 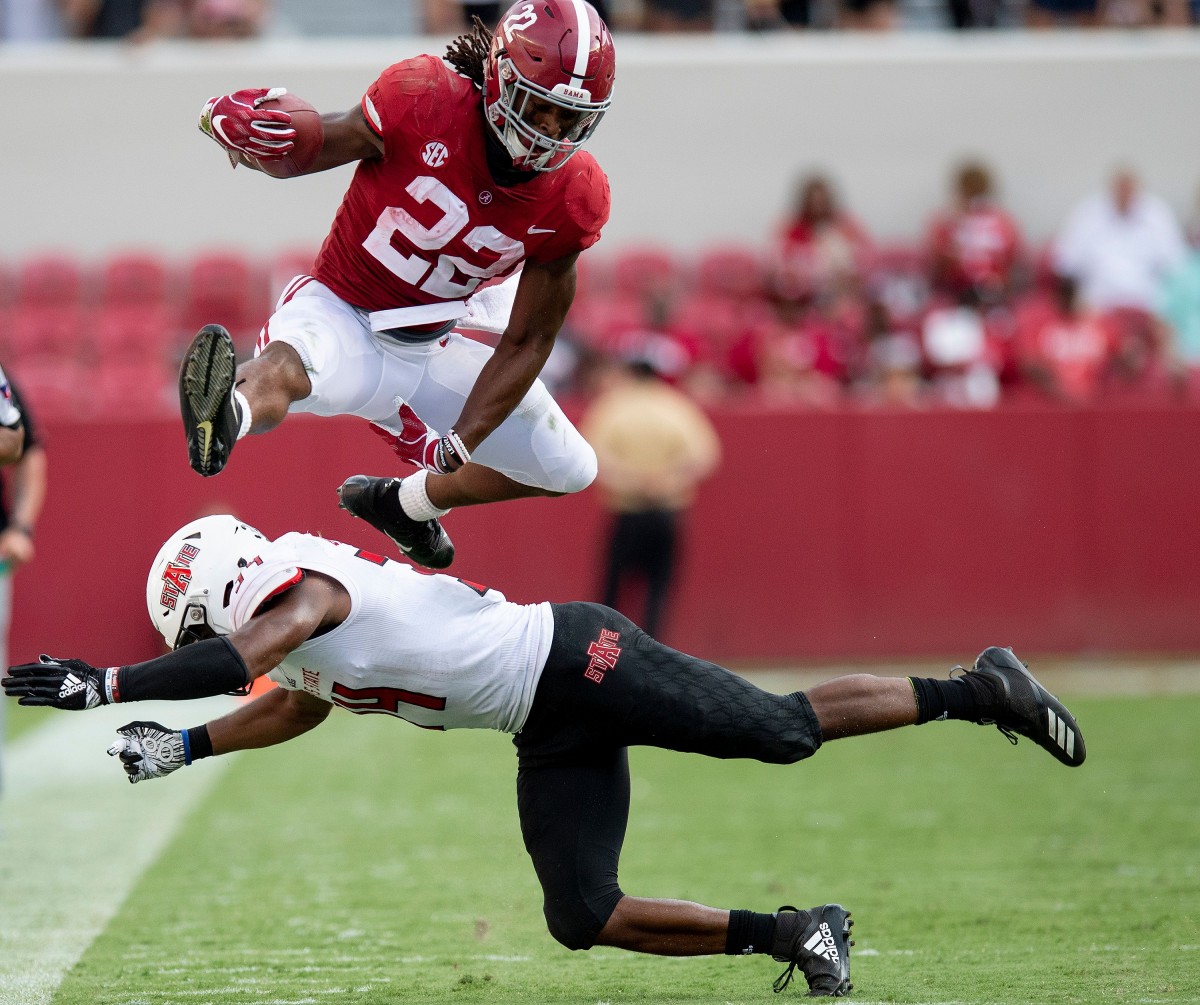 Though just nine picks away from falling to the second round, Steelers rookie running back Najee Harris was selected No. 24 overall, which means a significantly larger payday when his contract is signed.

To give an idea of the difference in value between being selected in the first versus the second, Chase Claypool signed a four-year, $6.616 million contract last July.

Rookie contracts are typically signed in the summer.

Harris spent draft night at Greater Richmond Interfaith Program (GRIP), a homeless shelter where he spent a portion of his youth. 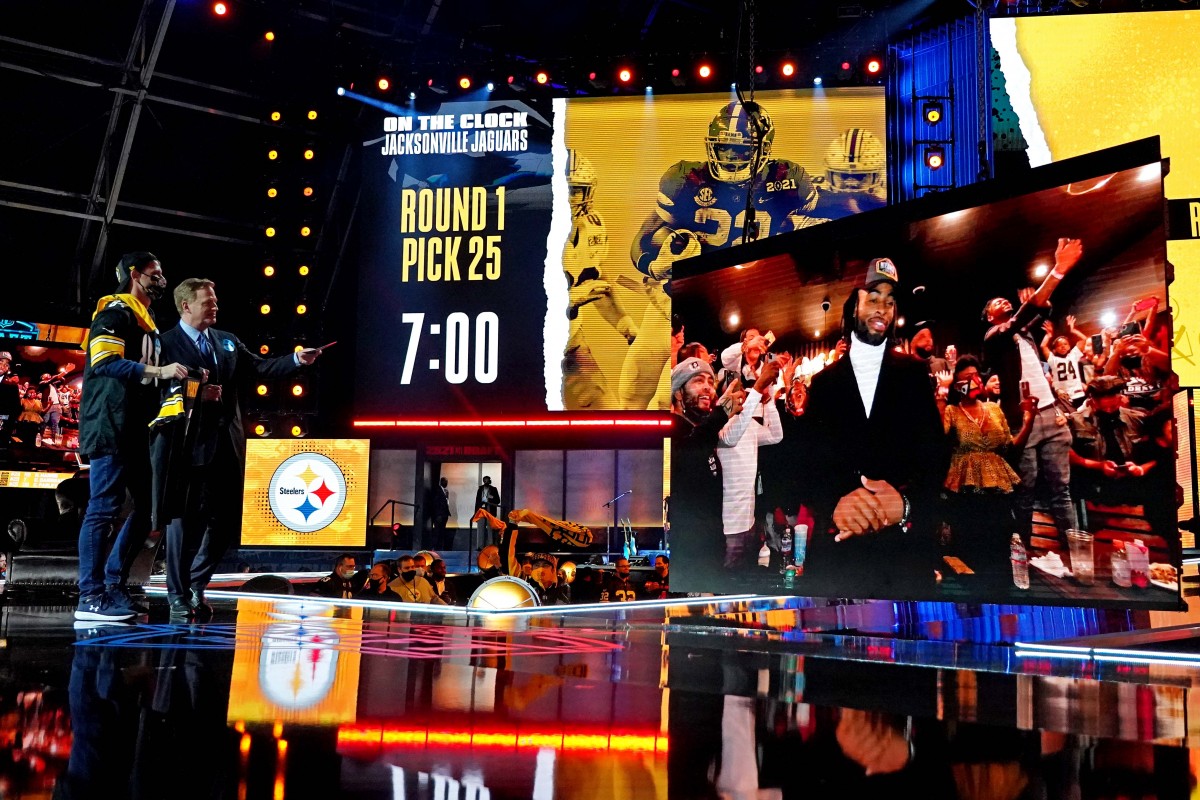 Many projected first-round draft picks are at the NFL draft spot hanging out in the green room waiting for their name to inevitably be called. The once-in-a-lifetime opportunity to walk across the stage and hug it out with commissioner Roger Goodell is something not to be passed up.

But not Najee Harris, the Steelers rookie running back selected No. 24 overall in the 2021 NFL draft. Instead, he spent the evening at a Bay Area homeless shelter where he once lived with his family.

Harris, his four siblings, and his parents spent several years at Greater Richmond Interfaith Program (GRIP) during his childhood. He saw the big night as an opportunity to give back to the shelter that helped him as a youth and organized a draft party.

“I wanted to make sure that I could give back to the community and show them if y’all still need anything like I’m never too big or too whatever to help you guys out, I’m always going to be the helping hand,” Harris told KDKA, Pittsburgh.

There will have plenty more chances to give back to GRIP, as Harris’s rookie contract is projected to earn him $13 million, according to Spotrac.

Whatever team drafts Alabama's Najee Harris is getting a special person. Today he threw a draft party for kids at the homeless shelter where he lived for several years growing up. He told me it was emotional the first time he went back to visit. @kron4news #NFLDraft #RollTide pic.twitter.com/JadBIFh4pd