2020 fantasy strength of schedule for receiving 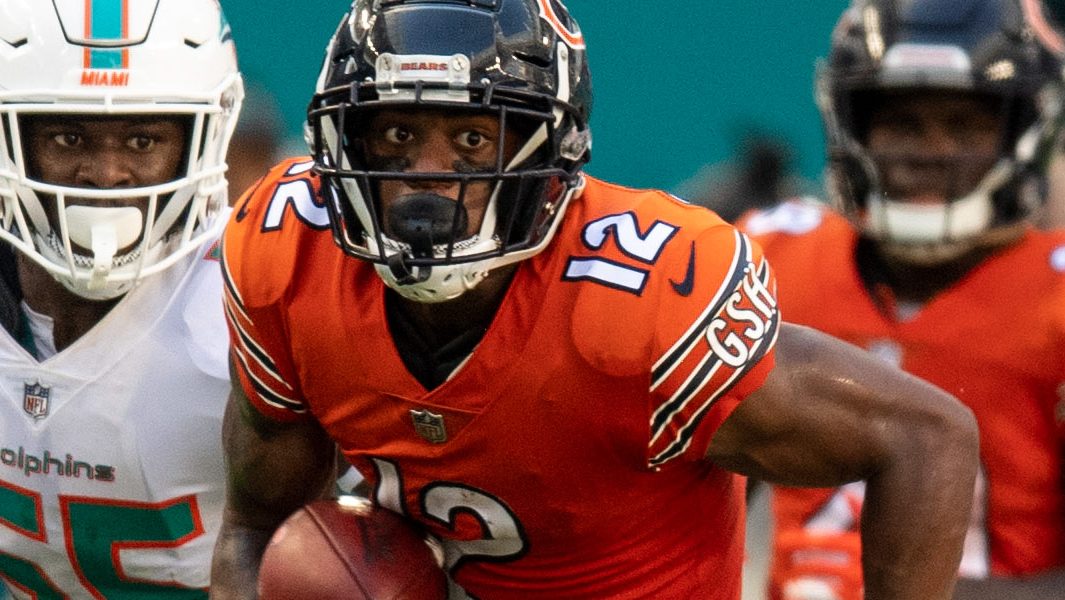 The strength of schedule for receivers considers both wide receivers and tight ends but not running backs. The usage of wideouts and tight ends varies from team to team so they should be considered together. As there are only a handful of relevant fantasy tight ends each year, considering them alone would result in much greater inaccuracy.

Receivers are also the least impacted by the schedule strength.  The top receivers from each offense will always garner greater coverage. And those are mostly controlled by the quality of the opposing cornerback. Wide receiver vs. cornerback is the only 1:1 matchup of all fantasy players and defenses. So take this only as a minor consideration in valuing a player.

For fantasy contests and such, only total points matter so below are the total points for each passing offense derived from their schedule against the averages allowed in 2019 by those defenses. 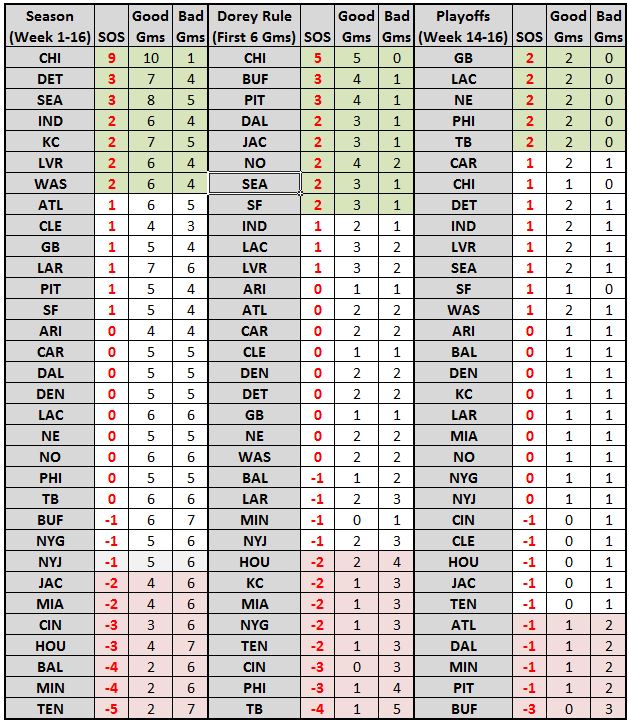 Allen Robinson/Anthony Miller (CHI) – The Bears have the best passing schedule across the board and that will benefit Robinson and Miller the most. There is an opportunity within that since the quarterback controversy between Mitchell Trubisky and Nick Foles naturally throws shade on the receivers. With this schedule, either quarterback should look better and that benefits Robinson and Miller the most.

Kenny Golladay/Marvin Jones (DET) – Golladay is already a hot commodity after his 11 scores in 2019 but Jones was injured for the last two seasons. The return of a healthy Matt Stafford already bodes well and the Lions schedule is one of the lightest for receivers. Aside from matchups with the Packers and Bears, the wideout duo should make even more noise this year.

Tyler Lockett/DK Metcalf (SEA) – The duo already combined for 1,957 yards and 15 touchdowns in 2019. Now they get to face the bottom third of soft venues in half of their games. A mature offense with one of the better quarterbacks in the league gets a schedule advantage over most of the league. And this offense focuses almost solely on those two starting wideouts.

T.Y. Hilton/TBD – After a downturn last year, it is easy to forget that Hilton’s last two seasons with Andrew Luck produced 1,448 and 1,270 yards respectively. Now Philip Rivers takes over and that bound to improve Hilton’s stats. Throw in a schedule with only four bad venues and he’s sure to improve. The rookie Michael Pittman battles Zach Pascal and Parris Campbell for the No. 2 role that should surprise given there is only one bad matchup over the first eight weeks.

A.J. Brown/Adam Humphries (TEN) – The Titans are a run-first team anyway, but the schedule isn’t going to make it any easier when they pass. Brown was red hot down the stretch of his rookie season and is clearly the only notable receiver there. He starts out with three of his first four matchups versus top defenses and doesn’t enjoy any soft secondaries over his final six games. Brown should still see the volume to produce fantasy value but the other receivers are more certain to feel the impact of this schedule.

Marquise Brown/Mark Andrews (BAL) – Hard to get excited by any receiver on a team with a historic volume of rushing and even with the stellar results of 2019, Lamar Jackson only threw for 3,225 yards. And the Ravens had one of the lighter passing schedules last year. Now they only face two of the softer venues and one of those comes in Week 16. The 39 touchdown passes were spread over the entire offense other than Brown (7) and Andrews (10). They’ll need those scores to return similar fantasy value against this far more challenging schedule.

Adam Thielen/Justin Jefferson (MIN) – An improved rushing offense saw the Vikings passing decline from 2018 and injuries further depressed the production. With Stefon Diggs gone, the rookie Justin Jefferson is expected to pair with Adam Thielen but no other team has fewer matchups against weaker defenses than the Vikings. Three of the final four games of the fantasy season face bad venues. Tough year for Jefferson to learn the ropes and Thielen to get back to his success of 2018.

Stefon Diggs/John Brown (BUF) – Overall, the Bills receivers go against an average schedule strength but that happens in a curious way. Over the first ten weeks, they face just two bad venues and yet enjoy six good ones. After their Week 11 bye, it all goes bad.  Their final five games of the fantasy season – including all of the fantasy playoffs – pit them against the worst venues. Those final five are the Chargers, at the 49ers, Steelers, at the Broncos, and then at the Patriots. That’s not going to propel anyone into their fantasy playoffs. 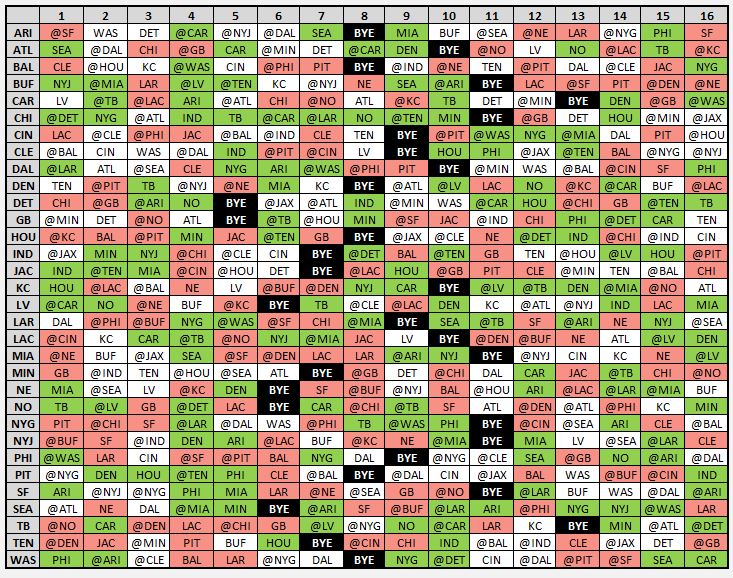 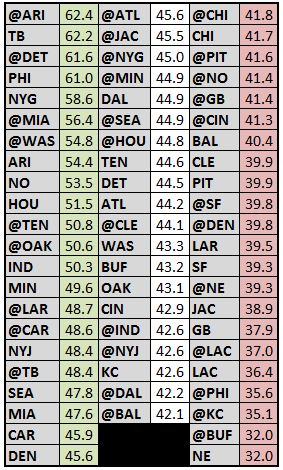 Fantasy values were derived from 1 point per 10 receiving yards and six-point passing touchdowns.

2020 fantasy strength of schedule for receiving 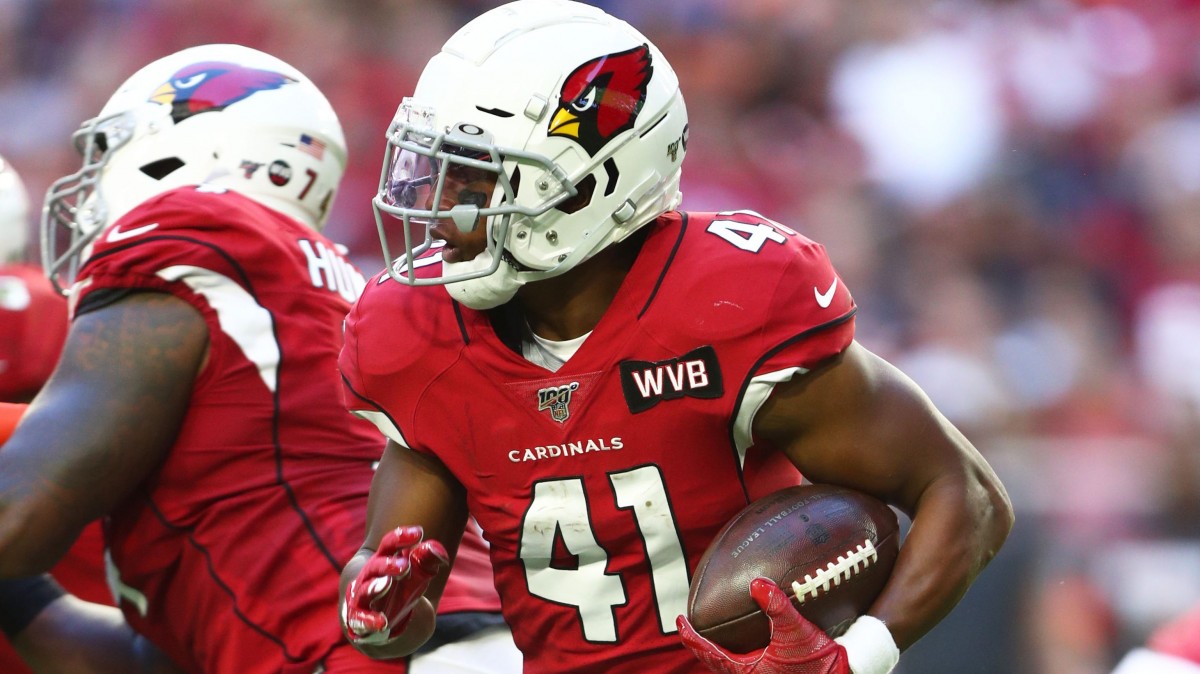 The strength of schedule for running backs only considers rushing yardage and scores. Since there is a great difference between how teams use them as receivers, that impacts the stats allowed by a defense. For a simpler and more 1:1 consideration, this is the strength of schedule for what only rushing production was allowed by defenses including each home or away venue.

For fantasy contests and such, only total points matter so below are the total points for each rushing offense derived from their schedule against the averages allowed in 2019 by those defenses. 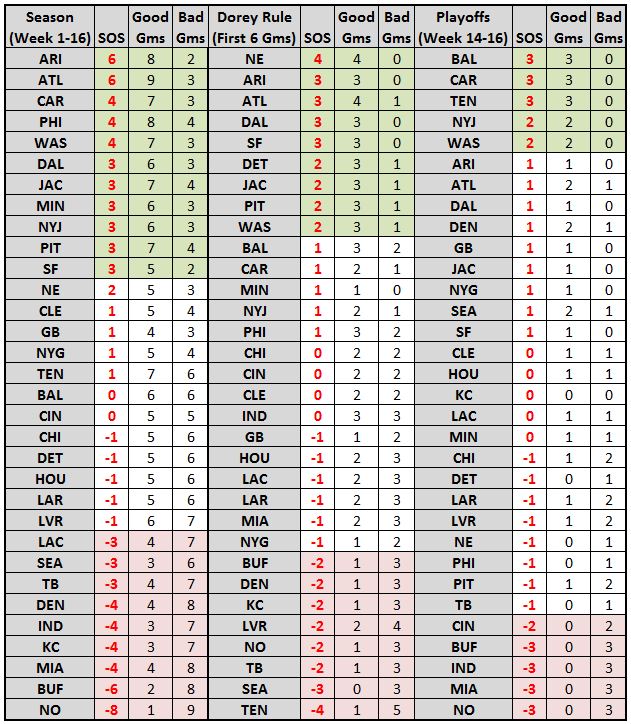 Kenyan Drake (ARI) – He blew up over the final month in Arizona last year and sent David Johnson packing. Now Drake takes over the primary role for an up-and-coming offense with as much upside as most any back. Drake never faces one of the tougher venues until Week 10. That’s the way to start a season.

Todd Gurley (ATL) – His production waned last year and the Rams paid dearly to part ways. There is little competition in the Falcon’s backfield and Gurley scored at least 14 touchdowns in each of his last three years. By Week 13, he’ll go against only one bad venue and yet seven of the easier.  He may not run as well as he once did, but he’s always been money at the goal line.

Miles Sanders (PHI) – His solid rookie season ended with 4.6 yards-per-carry and he assumed a more full-time role after midseason. Jordan Howard is gone and Sanders faces the softest defenses in half of his games. October is rougher with Steelers, Ravens, and Cowboys, but his final eight weeks contain just one bad venue.

Ezekiel Elliott (DAL) – Like Sanders, Elliott has a tougher time in Weeks 8 to 11, but otherwise enjoys one of the lighter schedules of his career. That only solidifies his value as one of the initial fantasy draft picks.

Christian McCaffery (CAR) – This is just not fair. Other than two meetings with the Buccaneers and one trip to the Vikings, the No. 1 pick in the draft has one of the lightest slate of games in the NFL. His one downside – a bye during Week 13 could be a killer in fantasy leagues and contests.

Alvin Kamara (NO) – His yardage and scores were down in 2019, and now Kamara faces the worst schedule of any running back.  Worst yet, the fantasy playoffs face the Eagles, Vikings, and Chiefs. Elite backs are usually better than their schedule but Kamara slid last year too.

Jordan Howard (MIA) – There’s already plenty to not like about the rebuilding Dolphins this year and newly signed Jordan Howard will likely share with Matt Brieda. Throw in one of the worst offensive lines and a schedule that features bad matchups most of the time, and Howard is rightfully dropping in fantasy drafts. Even worse, fantasy playoffs are all bad against the Patriots, Chiefs, and at the Raiders.

Devin Singletary (BUF) – He may have to share with the rookie Zack Moss, but the diminutive Singletary was impressive down the stretch in 2019. That promise is likely to be at least somewhat limited with one of the toughest schedules in the NFL. He not only faces just two soft matchups, but fantasy playoffs go off with matchups against the Steelers, at the Broncos and at the Patriots. 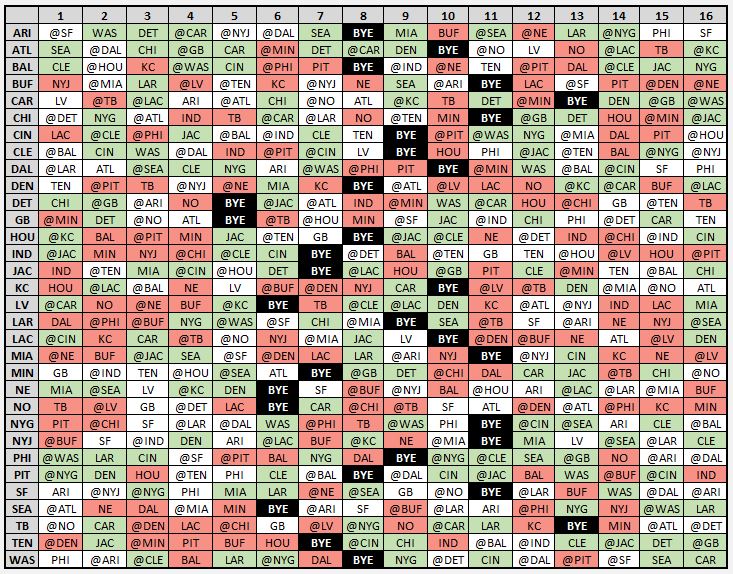 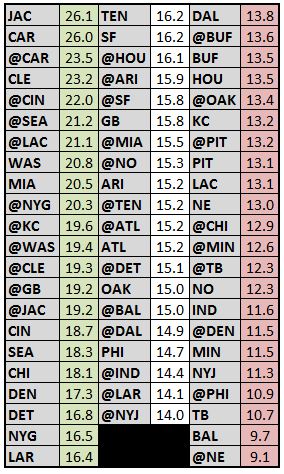 Fantasy values were derived from 1 point per 10 receiving yards and six-point passing touchdowns.

2020 fantasy strength of schedule for Passing 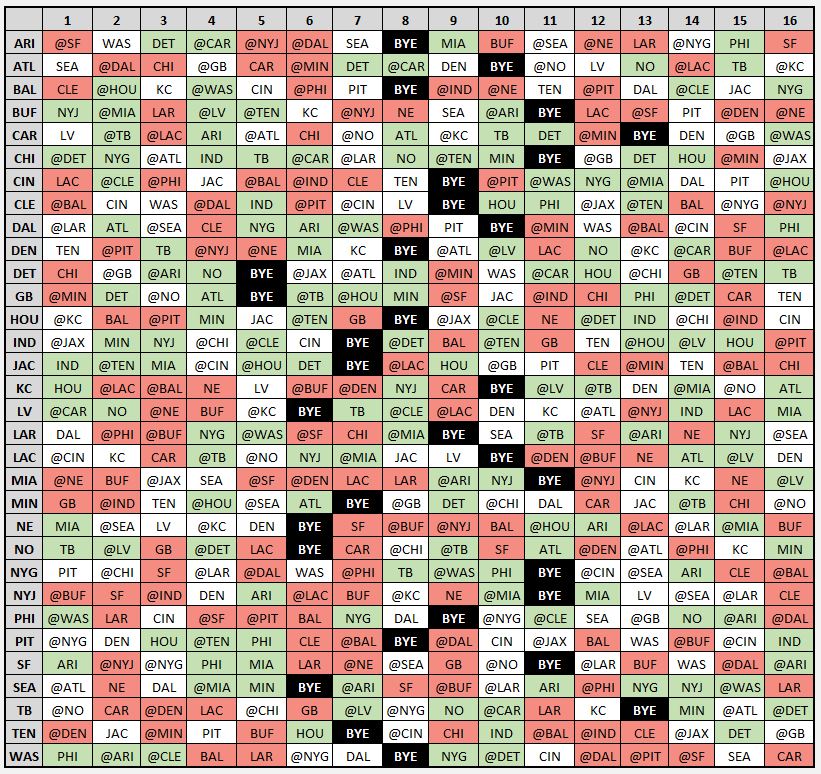 Over the 24 years since The Huddle originated strength of schedule analysis from a fantasy perspective, there have been tweaks along the way to improve accuracy and to minimize the spikes, flukes, and aberrations that result from the variable-rich environment of the NFL.

This year, quarterback rushing is not included. I am only totaling passing yardage and scores. There is a mountain of difference between playing against Lamar Jackson and any non-rushing quarterback and that impacts fantasy points allowed.

If your fantasy starter also runs the ball, all the better. The average passing fantasy points allowed per venue is at the bottom of this page for reference. Only the first 16 weeks were considered in all analyses to follow.

For fantasy contests and some leagues, only total points matter so below are the total points for each passing offense derived from their schedule against the averages allowed in 2019 by those defenses. 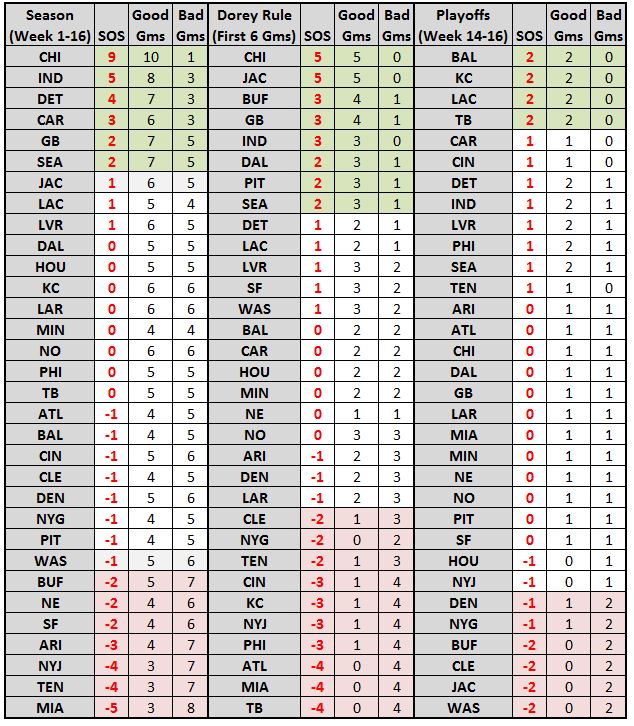 Mitchell Trubisky/Nick Foles (CHI) – The reality is that the Bears had one of the better schedules last year and Trubisky did not take advantage. Now there’s no certainty which quarterback will start. Maybe if Foles overtakes Trubisky on the depth chart…

Matthew Stafford (DET) – He was on a path for a 5,000-yard season in 2019 but missed the final eight weeks. Now he’s back with one of the best schedules in the NFL. A mature offense and new weapon with D’Andre Swift goes against the AFC South and NFC South and that could allow Stafford to surprise.

Philip Rivers (IND) – Playing in Pittsburgh in Week 16 won’t help, but Rivers steers the Colts through the first ten weeks with only one matchup in a tougher venue. Fantasy leaguers usually downgrade players changing teams but this schedule says Rivers remains relevant.

Teddy Bridgewater (CAR) – The schedule is kinder than most though there’s a ton of change going on with the Panthers, let alone relying on a new quarterback.

Best and worst venues to play 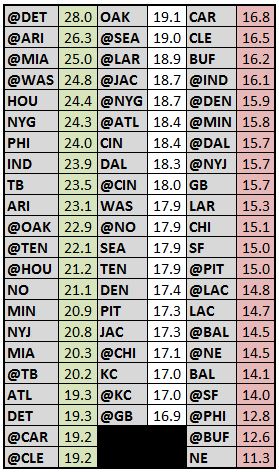 Fantasy values were derived from 1 point per 20 pass yards and four-point passing touchdowns.