Maja Stark was the last woman to earn a spot on Augusta National for the final round of the ANWA after a day of moving cut numbers. 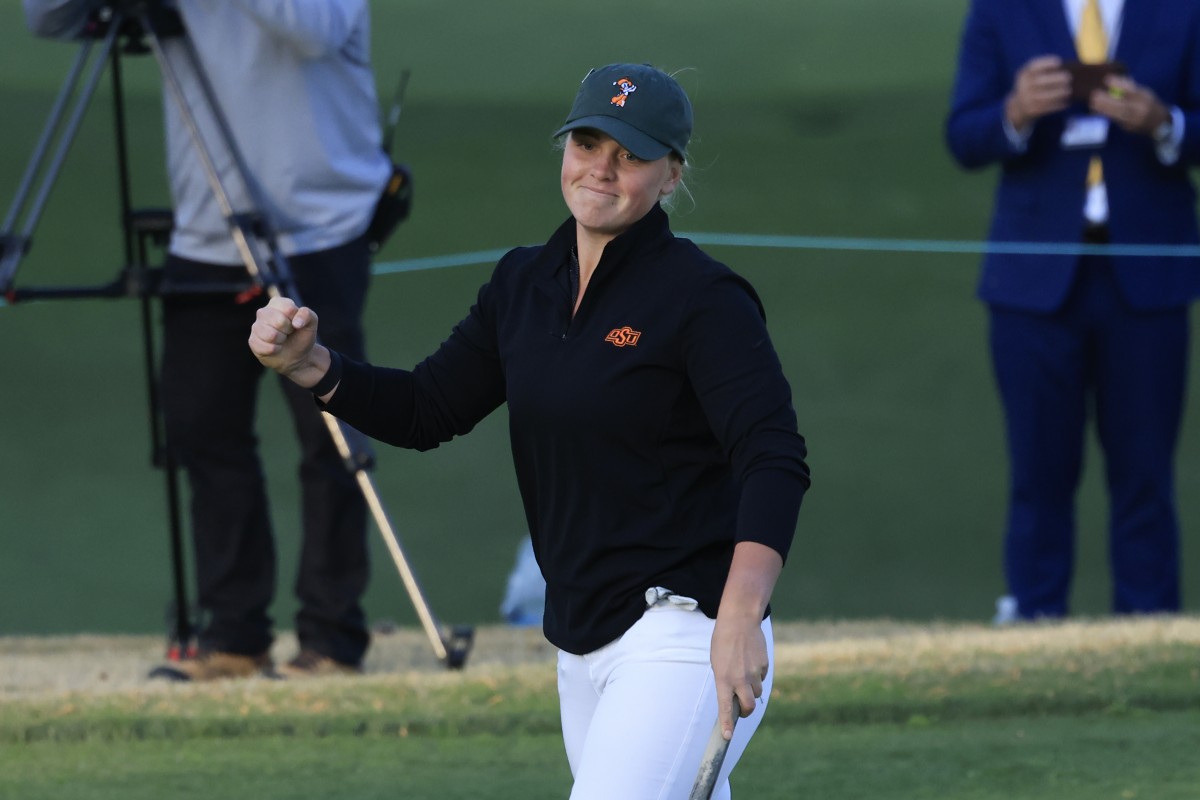 AUGUSTA, Ga. – Kate Smith intended to go to bed at 9 p.m. on Wednesday night. It took much longer than that to drift off.

“I couldn’t sleep,” she said. “Normally you can look at the TV or phone as distraction; I just laid there. I just thought about my opportunities for the next day, those six holes a lot.”

Smith, a fifth-year senior at the University of Nebraska, was at 4 under and had a three-shot lead when the first round of the Augusta National Women’s Amateur was suspended because of weather. She had only played 11 holes.

When Smith returned on Thursday morning to finish, the temperature had dipped below 50 degrees. She played her remaining seven holes in 4 over. Shortly after lunch, she was back on the first tee for her second round and slowly slipped down the leaderboard. When Smith three-putted the 17th green, it moved the 36-hole cut from 6 over to 7 over.

Smith landed in a playoff with four other women – Maja Stark, Lauren Hartlage, Amari Avery and Yu-Sang Hou – that ended quickly when Stark dropped an 18-footer for birdie on the No. 10, the first extra hole.

Like the rest of the 81-player field, Smith has a practice-round tee time at Augusta National on Friday even if she won’t be one of the 30 women competing on Saturday. Friday’s round might even be a little more enjoyable now.

“I was already trying to mentally prepare for that while being here,” Smith said of a wandering mind where the final round at Augusta National was concerned, “and I don’t think I was in the present all the time. It’s a long week and you’ve got to keep your head down and focus on what’s in front of you.”

Smith owned the start of the day, but Stark was squarely in the spotlight 12 hours later when she drained the birdie putt that sent her to Augusta National. It couldn’t have been better timed. The Oklahoma State sophomore only made three birdies in the past two days: One came on the 36th hole to help her get in the playoff and another was on the extra hole.

Interestingly, Stark had bogeyed No. 10 in regulation both days.

For a few short minutes—and with memories of an 11-for-10 playoff in the inaugural ANWA were still fresh—it looked like extra holes would be avoided on Thursday.

Kiira Riihijarvi is the only NCAA Division II player in the field this week. The fifth-year senior at the University of Tampa made tidy work of the cutline when she rolled in a birdie putt on No. 18 in the fifth-to-last group. That moved her from 7 over to 6 over and brought the cut with her.

Smith’s late bogey gave the other four players at 7 over second hope.

“I tried not to look at the leaderboard while I was playing,” Riihijarvi said of coming down the final holes. “They made it difficult because they’re really big.”

Regardless of what the leaderboard said, a number became more and more difficult to pin down as wind swirled all day and made the closing stretch particularly difficult.

Ana Pelaez Trivino, a fifth-year senior at South Carolina, felt that as much as anyone. She fired a 1-under 71 and went to bed Wednesday with a share of second place. She played the front nine in 2 under on Thursday but was 5 over on the back. At 6 over, she snuck in to the third round on the number.

Pelaez Trivino said the big numbers on the back – three bogeys and a double – weren’t even a product of focusing too much on the cut because she wasn’t focusing there at all. Mental game is an advantage for the firey Spaniard.

Erica Shepherd played the last three holes in 2 over to land at 6 over, which eventually left her safely inside the cut. It was a similar scenario to the one that played out in 2019, when Shepherd also narrowly avoided the playoff.

“Kind of had the same feeling heading down the last hole,” she said. “I guess that experience from being there two years ago may have helped me a little bit.”

Shepherd, who finished T-23 after a final-round 75 at Augusta National in 2019, bogeyed No. 18 on Wednesday, and only after laying up on the par 5 realized she could have reached the green with her 3-wood. She missed a downhill slider for par but bogey was still enough.

Having made the cut here once, Shepherd was extra motivated to secure another Saturday tee time.

“Just to see in person how it’s actually better than it is on TV and just being part of that experience and to see how much that did for women’s golf and just to have been there,” she said, “just kind of that pressure that I put on myself to get back, it’s kind of a relief to know that that’s secured now.”