A legit international superstar is heading to Mexico 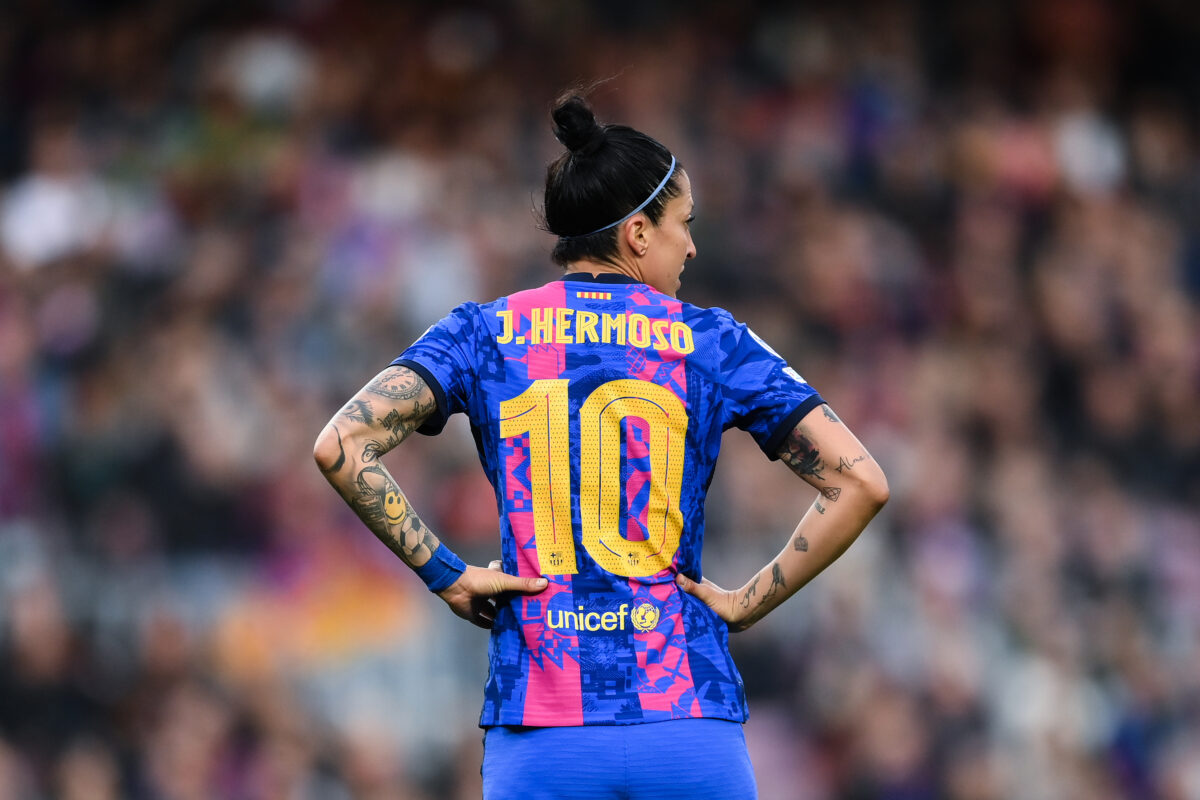 In a landmark deal for both club and league, Jenni Hermoso, Barcelona and Spain’s all-time leading scorer, has signed with Pachuca in Liga MX Femenil.

Hermoso is one of the most decorated players in Spanish women’s soccer history, winning the La Liga Iberdrola scoring title five times and featuring on seven league champions during spells at Barca, Atlético Madrid, and Rayo Vallecano. She won the 2020-21 UEFA Champions League with Barca as well, along with four Copa de la Reina victories, and won the Coupe de France during her one season in France with Paris Saint-Germain.

Hermoso was the runner-up for the 2021 Ballon d’Or, and has 45 goals in 91 appearances for Spain.

Hermoso choosing Liga MX Femenil is a game-changer for the league, and the fact that she’s moving to Pachuca rather than Tigres, Club América or Monterrey signals that club’s ambitions.

Mexican clubs have been making some major moves over the past two years. The one that got the most attention is likely Tigres signing U.S. women’s national team prospect Mia Fishel after the Orlando Pride had selected her in the first round of this winter’s draft, but that’s not the only sign that Liga MX Femenil is looking to grow quickly.

Tigres has also signed Nigeria striker Uchenna Kanu and just brought in former Canadian international Carmelina Moscato as their head coach, while NWSL players like Maria Sánchez and Stefany Ferrer van Ginkel have impressed enough to make the move, with Sánchez now a key player for the Houston Dash.

Still, Hermoso is a legitimate international star that could play in any league in the world. The fact that it’s Pachuca bringing her in, rather than one of the traditional juggernauts of Mexican soccer, underlines the fact that Liga MX Femenil has grown by leaps and bounds in its first five years. 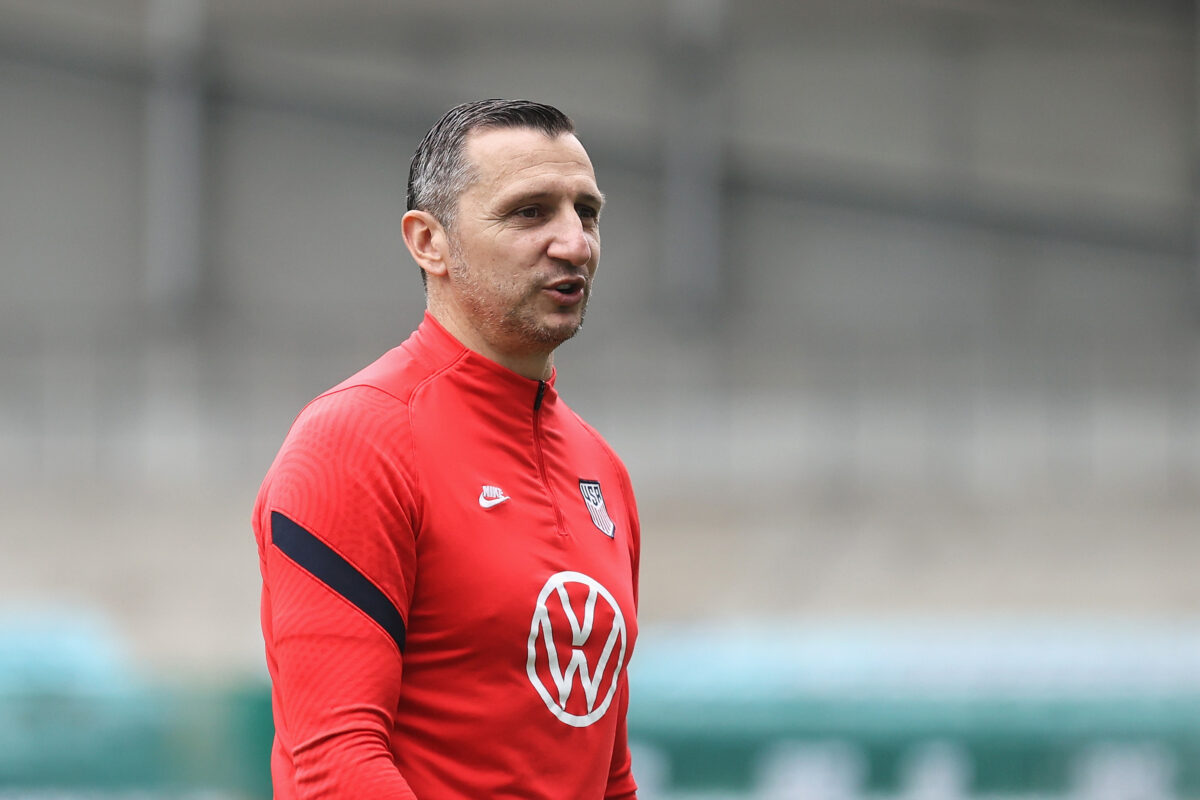 The U.S. women’s national team has been dominant against Mexico over the years, winning 39 of 41 total games including the last 15 in a row.

But all 15 of those games in the current streak have come on American soil. The next time the USWNT faces Mexico it will be on Mexican turf, where things haven’t always gone according to plan for the Americans.

Most notably, the USWNT’s only loss to Mexico came in 2010 in front of a packed house at the Estadio Beto Ávila in Cancún, where Mexico stunned the U.S. 2-1 in the Women’s CONCACAF Championship semifinals.

The win qualified Mexico for the 2011 World Cup and required the U.S. to win the CONCACAF third-place match followed by an intercontinental playoff against Italy to qualify for the World Cup.

The USWNT is set to face off against Mexico on Mexican soil for the first time since 2010 when the rivals meet at Estadio Universitario on July 11 in the final group-stage match of the CONCACAF W Championship.

In an interview with FIFA’s official website, U.S. head coach Vlatko Andonovski said he was relishing the chance to face off against his team’s rivals in front of a hostile crowd at the 42,000-seat stadium.

“The fact that it’s in Mexico makes it a lot harder for us,” Andonovski said. “But that’s what makes it exciting too because I feel this young group needs to go through adversity as soon as possible.

“We can’t go into the World Cup with that being the first competition where they face that adversity, so to have Mexico in our group, playing in front of a full stadium that will be chanting against us, really excites me. I don’t think the majority of the group we’re taking there will have faced something like that and it will be a good learning opportunity. I just hope we come out at the end with some success.” 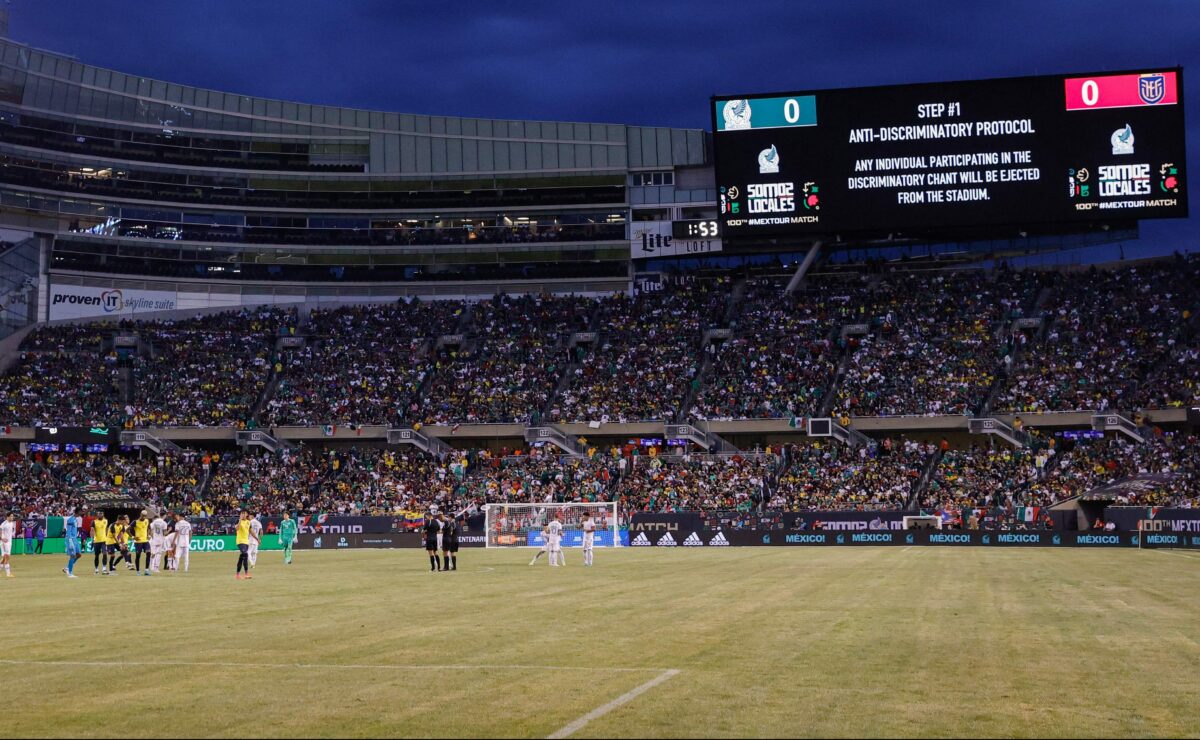 Mexico match against Ecuador on Sunday was halted in the second half due to Mexico fans once again using an anti-gay chat toward the opposing goalkeeper.

The two teams drew 0-0 in a friendly at Soldier Field in Chicago in front of an announced crowd of 61,104.

The chant was heard during an Ecuador goal kick in the 81st minute, prompting the referee to initiate step one of FIFA’s three-step protocol. Players gathered around the center circle for a brief stoppage before play resumed.

As part of the three-step protocol, a second stoppage would have resulted in a suspension of play with players going to their dressing rooms, while a third incident would have seen the game abandoned.

Fans at Soldier Field were warned in several different ways on Sunday, including a video message before the game from Mexico star Andrés Guardado, but those warnings ultimately failed to achieve their aim.

Mexico was forced to play two World Cup qualifiers this year behind closed doors at Azteca Stadium due to a FIFA punishment over the chant.

After Mexico was shut out 3-0 by Uruguay last week, Tata Martino’s side again went scoreless against Ecuador.

Though Mexico’s attack has struggled throughout 2022, Martino said after the match that he was not concerned about his team’s lack of offensive firepower of late.

“I was worried when we lost to the United States and Canada [in World Cup qualifying] in the middle of November last year,” Martino said after the game. “Everything that’s happening now, in addition to wanting to play well and win and score a lot of goals, is to find the best setup and find the variations that we may need in a World Cup.”

Next up for Mexico is two CONCACAF Nations League matches, at home against Suriname on Saturday and away against Jamaica on June 14.
[lawrence-related id=2681,1675,1185]

It was a rough night at the office for Tata Martino and El Trí. 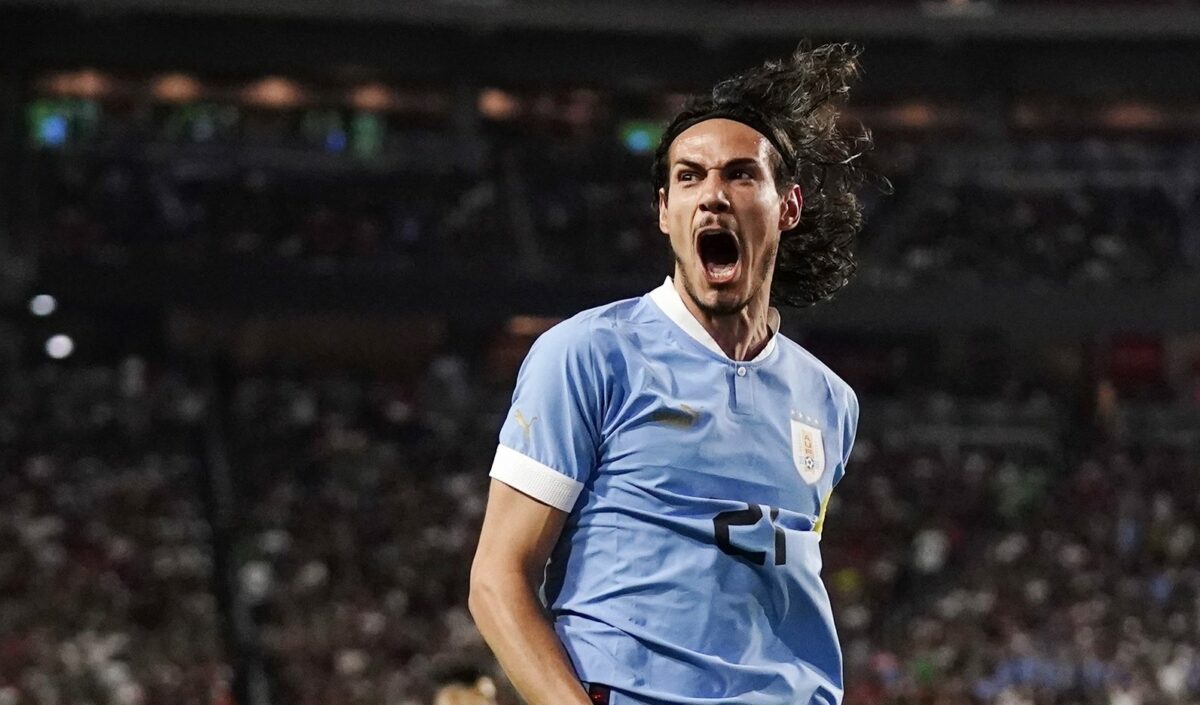 Cavani scored his first goal just 14 seconds into the second half, and added his second shortly thereafter, leaving Mexico to eventually be jeered off at full time by a crowd of over 57,000.

In truth, the 3-0 scoreline could have been worse, as Martino’s use of a back five presented Uruguay with no trouble. A wild 13th minute scramble in the El Trí box eventually saw Federico Valverde crack a shot off the post, while Mexico had little in the way of a response beyond sporadic counter-attacks that lacked the sharp precision that Uruguay showed on the night.

While Mexico qualified for the World Cup with relative ease, posting five straight shutouts to finish the Octagonal, fans have been frustrated enough to call for Martino’s job for months now. The range of reasons include a perceived results-first focus clashing with a soccer culture that requires stylish play, and sporadic bad results outside of CONCACAF like this one.

Uruguay, meanwhile, looks more than ready for Qatar 2022, and will face the US men’s national team on Sunday night. Based on the ease with which they shoved El Trí aside, they will be possibly the most serious test the USMNT gets before jetting off for the World Cup. 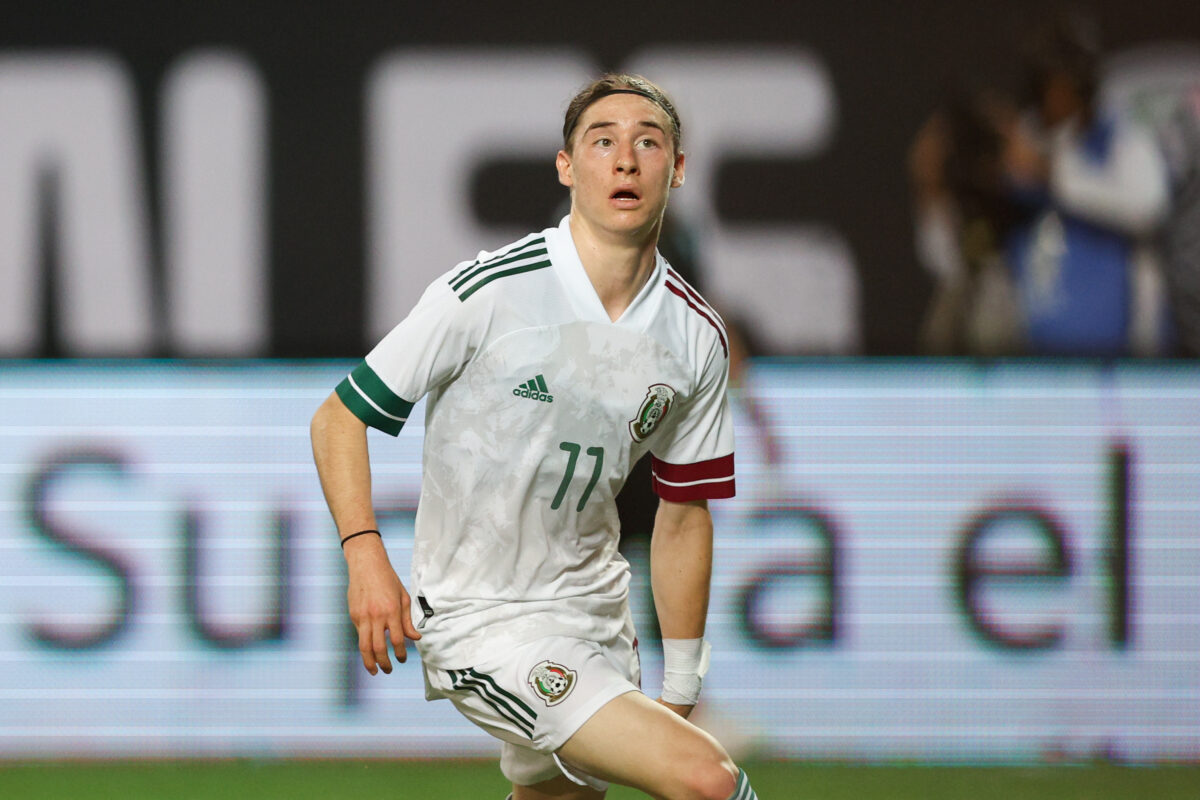 Marcelo Flores has confirmed he is committing his international future to Mexico, turning down the opportunity to play for either Canada or England.

Flores, 18, is a rising star in Arsenal’s academy and made the bench for the Gunners senior team last month for the first time, though he has yet to make his debut.

The attacking midfielder was born in Canada to a Canadian mother and Mexican father, and moved to England when he was 13, making him eligible to play for all three countries.

Now, after already making two appearances for Mexico’s senior national team in friendlies, Flores has said he is committing to El Tri for the rest of his career.

In a heartfelt post on social media, Flores paid tribute to all three countries he was eligible to represent before confirming his intent to play for Mexico.

“Today I speak from the heart and feel the need to communicate something I’ve known to be true for a while that I think is important you hear directly from me: I will represent Mexico wholeheartedly for the rest of my professional life,” Flores wrote.

Here’s something I’ve been wanting to share for a while 👇🏻🇲🇽 pic.twitter.com/9VdMdeWTp0

Could Flores play at the World Cup?

Even before his announcement on Monday, Flores has been considered a dark horse candidate to make Mexico’s roster for the World Cup later this year.

Mexico’s attack struggled during World Cup qualifying and Flores, despite his lack of first-team experience, is considered one of the best attacking prospects in El Tri’s pipeline.

Flores addressed his World Cup chances in his announcement, saying he’d love to be in Qatar.

“Do I want to go to the upcoming World Cup? Sure, every Mexican child dreams of paying in the World Cup,” he said. “But I recognize that decision is not for me to make. I will focus on getting better every day and being ready for when those opportunities come around.”