Tom Brady showered Alex Smith with compliments and admiration on Saturday night after the game, calling his comeback ‘unbelievable.’ 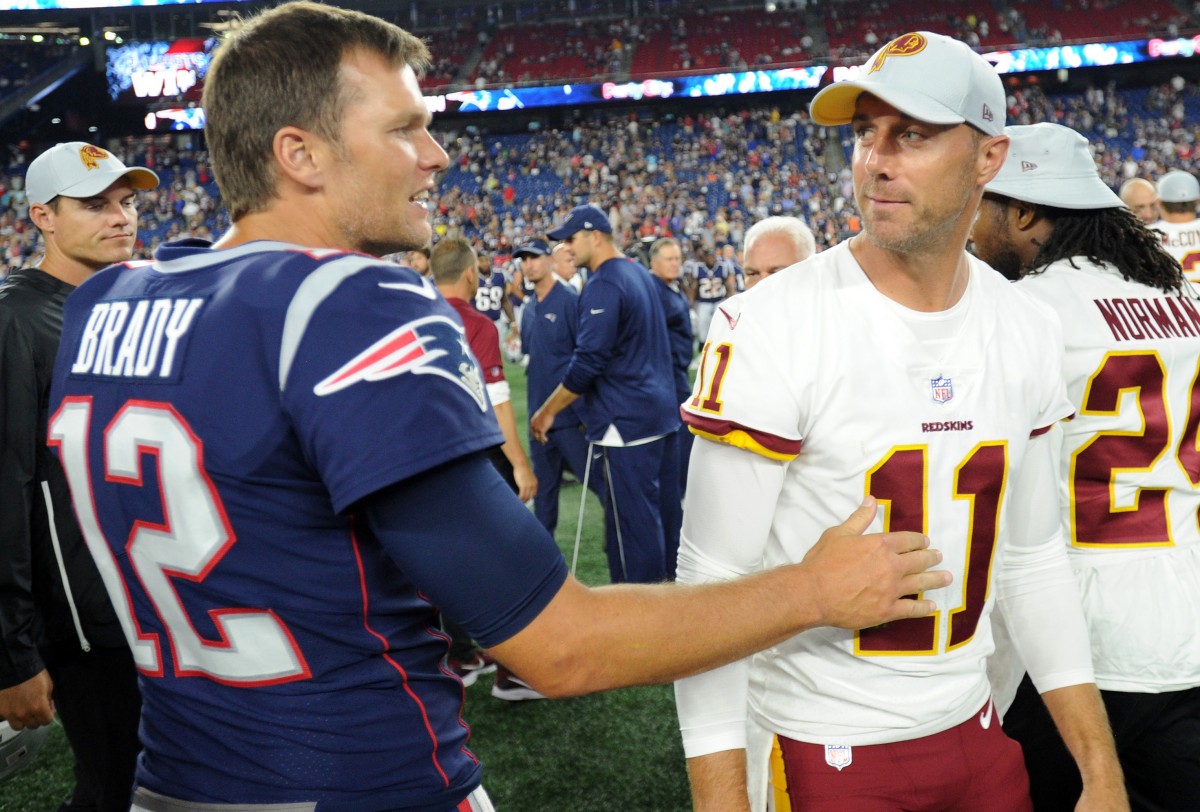 Saturday night definitely didn’t pan out how Washington quarterback Alex Smith ultimately planned, especially considering the fact that he didn’t suit up for the playoff game against the Tampa Bay Buccaneers, and his team ended up seeing their season end at the hands of Tom Brady.

However, there was a cool moment after the game that Smith will likely remember for the rest of his life. It is customary for the opposing quarterbacks to meet at midfield after the game to shake hands, but Brady sought out Smith, who didn’t play, and paid his respect and admiration after what was an incredible comeback year for the veteran in Washington.

Tom Brady was mic’d up for the Wildcard game in Washington. Here’s what he said to Alex Smith after the game:

"I’m so F-ing proud of you bro. You’re F-ing unbelievable you know that? You’re an inspiration to all of us. You’re unbelievable. Always here if you need me.”#respect

It’s pretty much a foregone conclusion at this point that Smith will win the Comeback Player of the Year award, and with the added respect that he now has from the greatest quarterback of all time, the moral win column is filling up quickly for Smith.

The performance that Taylor Heinicke put on vs. the Bucs is now in the record books, being topped by only Andrew Luck since 2015. 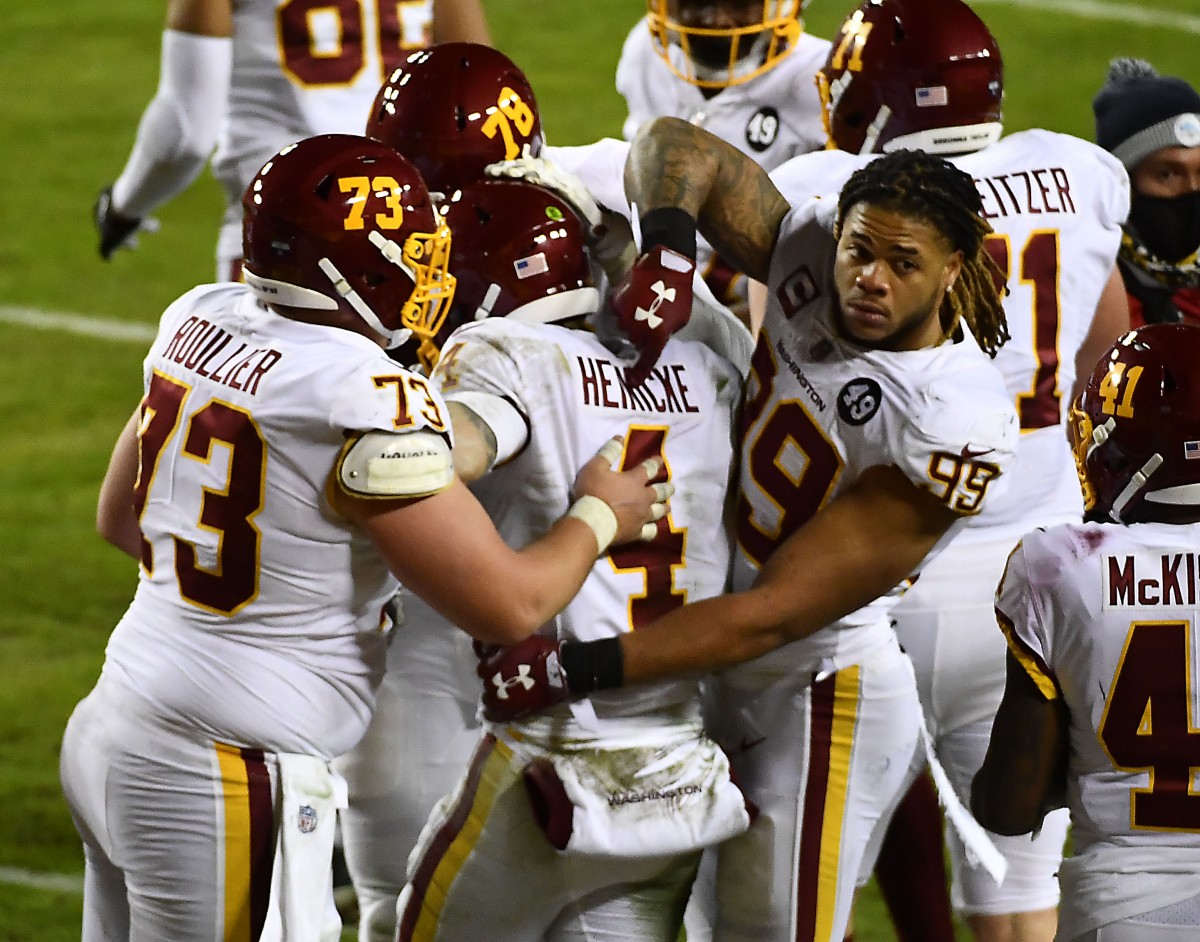 A few days have now passed since Washington’s wild-card game against the Tampa Bay Buccaneers, but the performance that former practice squad QB Taylor Heinicke put on is still not far from our minds.

Though the end result was a loss, Heinicke’s performance was comparable to a breath of fresh air for a Washington fan base who has gone years without seeing any type of excitement from the quarterback position. With 306 passing yards, 46 rushing yards, and 2 total touchdowns, it also ranked as the second-highest graded performance from a quarterback in a wild card game since 2015, with only Indianapolis Colts QB Andrew Luck topping it.

There’s no telling what Heinicke’s future will be like in Washington, but there are assumptions that he at least bought himself a backup spot with his performance, with an opportunity to compete for the top job.

Whether it’s Alex Smith’s comeback, Ron Rivera’s battle with cancer, or Taylor Heinicke’s legendary debut, Washington’s 2020 season was ripe with storylines that could easily be turned into sports movies. 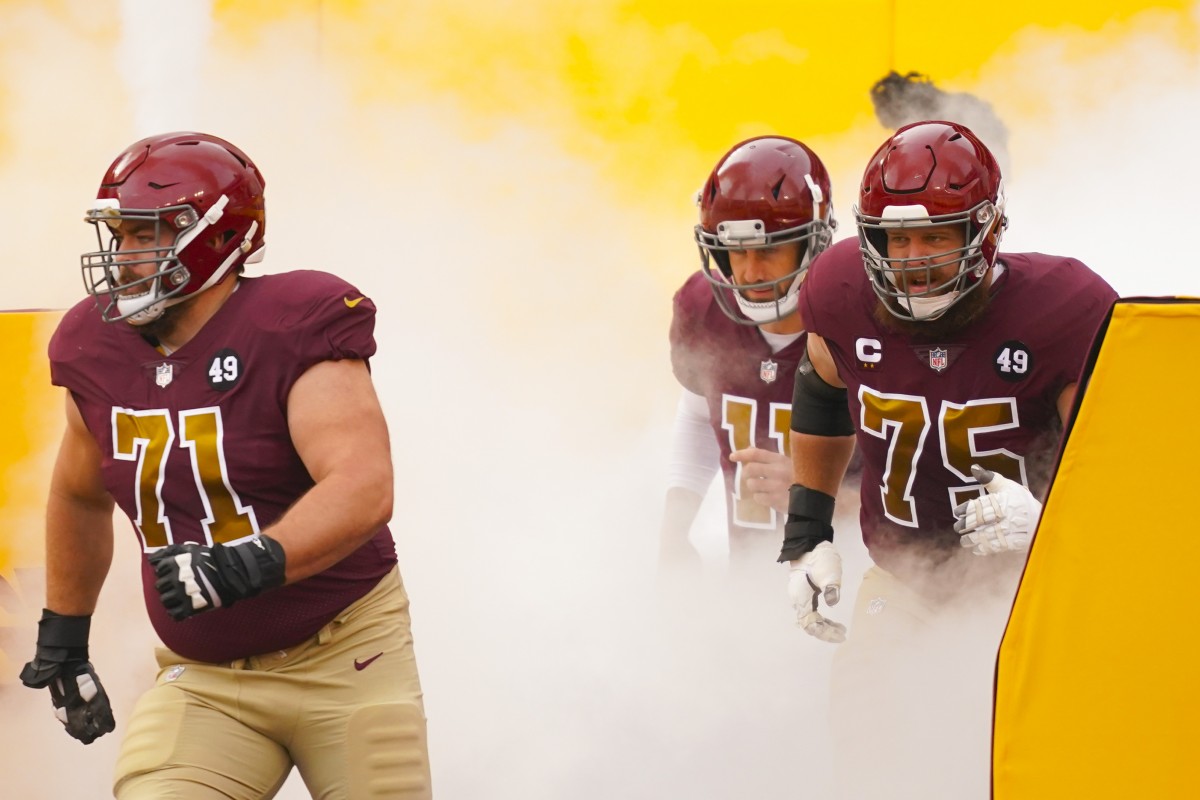 Now that the dust has settled a little bit and we can collectively start accepting the fact that the Washington Football Team’s 2020 season has come to an end, the time for reflection can start to begin.

One thing we often like to do in the American zeitgeist is blow things out of proportion, and make real events seem bigger than they were long after the fact. Whether it’s a historical event or the story of a person’s life, many times we see those tales taken to the big screen and made to be something that they weren’t, often for the sake of box office sales or Hollywood celebrity.

If there’s one thing we know after watching Washington’s 2020 season though, it’s that there are a number of storylines that could easily be transferred to the big screen.

Maybe it will happen one day, or maybe it’s all a pipe dream, but as an ode to what was an incredible season in Washington, here are some movie ideas that can be created from what we saw in Landover over the last several months.

Taylor Heinicke said that he separated the AC join in his left shoulder diving for the pylon on his incredible touchdown, but played the final quarter through the pain. 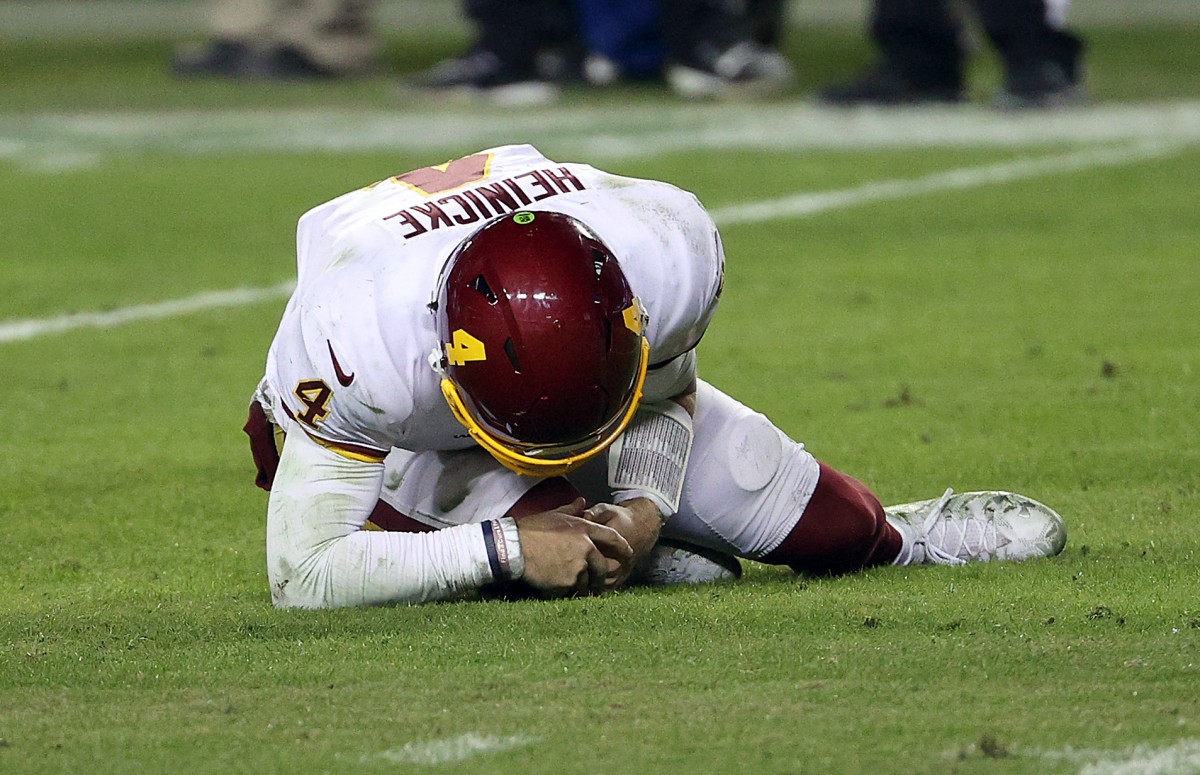 Taylor Heinicke said that, when he dove for the pylon, he felt "a click or a pop" in his shoulder. He didn't feel great, but he "went back there and gutted it out." He played through a separated AC joint in his left shoulder.

While the whole NFL world was celebrating and marveling at the miraculous play that Washington quarterback Taylor Heinicke had just completed, the QB was masking his pain.

The play was one that we’ll never forget; a near sack turned into a mad scramble to the left side that left Heinicke diving head-first towards the endzone pylon, barely tapping it for a Washington touchdown. On the play, the QB said that he felt a pop in his shoulder, and suffered a separated AC joint.

It wasn’t until the next drive that Heinicke got hit and left for the locker room to get checked out, but he eventually returned and finished the game on the field. It’s just another detail that will add to the legend of Taylor Heinicke, something that we will never forget.

Ryan Kerrigan took a last trip around FedEx Field after the loss on Saturday night, which might have been his last career game in Washington. 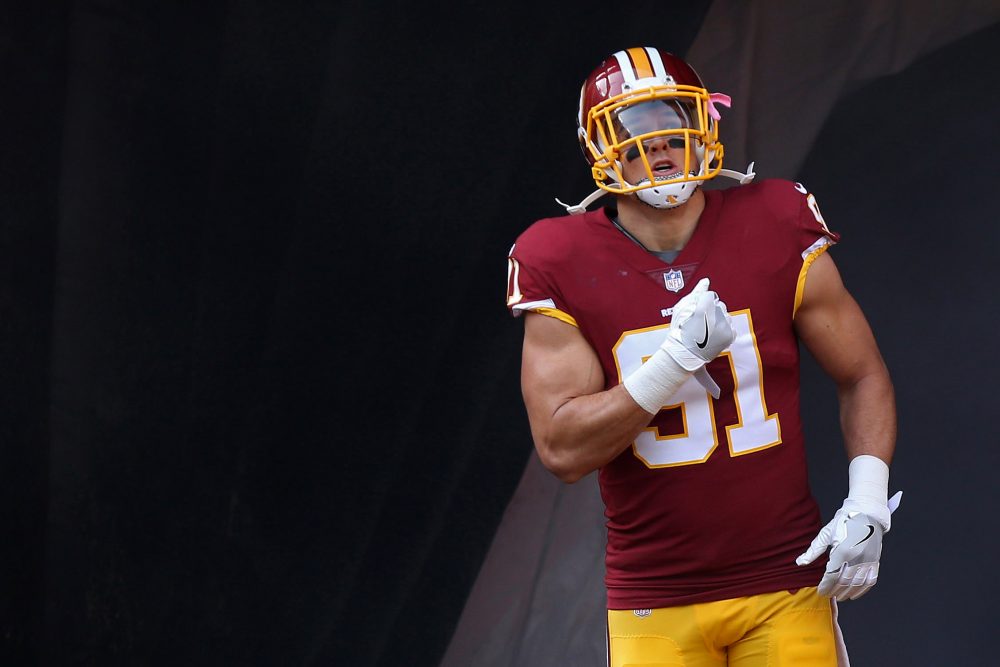 We don’t know it for sure, but Washington legend Ryan Kerrigan may have just played his last game in D.C.

With him set to be a free agent this coming offseason, and the team that drafted him having little need for the talents that he possesses, there is a feeling that Washinton will let Kerrigan test the free agent market this offseason, and he will likely be picked up by a Super Bowl contending team.

After the game on Saturday, which ended as a 31-23 loss to the Tampa Bay Buccaneers in the Wild-Card round of the playoffs, Kerrigan made a final trip to the field to soak in the moment.

Ryan Kerrigan came out, sat on the bench and just looked around. Had a towel with him and kept wiping his eyes. Then he waved to stadium workers as he walked toward the tunnel.

Definitely one of those "last moment" feels. pic.twitter.com/DO97nP5kmr

If this was the last time we see Kerrigan in a Washington uniform, it has been an absolute pleasure rooting for him for all of these years. We wish him all the best as he finishes out his career.

Washington’s improbable run at the playoffs came to an end in the first round. Nobody expected them to be there, but they made it anyway. 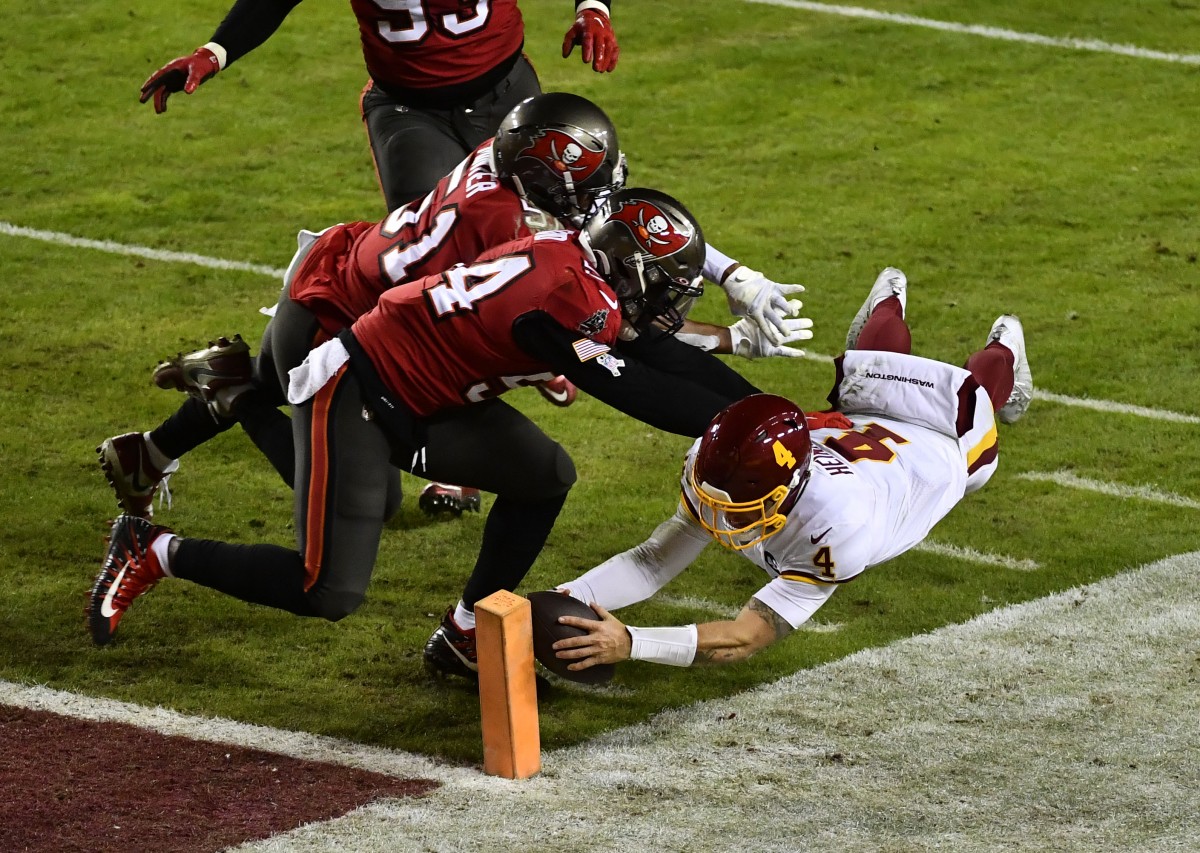 Twitter blew up with excitement after Taylor Heinicke made his miraculous scramble for a diving touchdown to get Washington back in the game. 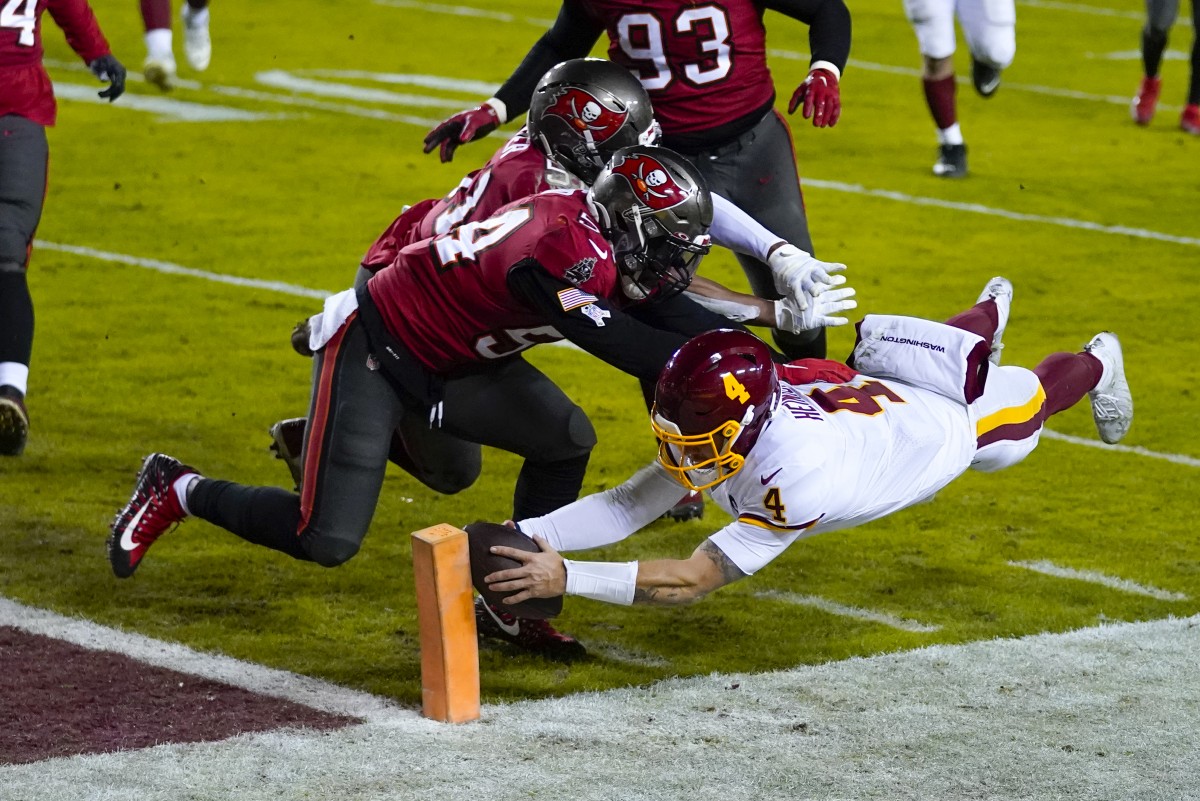 With a little bit of time left in the 3rd quarter, trailing by 8 points, Washington backup QB Taylor Heinicke, who was just signed to the roster midway through December, was put in a position to do something special.

He dropped back, felt the pressure from the outside, and started to improvise. Almost as if he’d done it before, Heinicke scrambled up and out to the left side, picking up the first down, and then making a last ditch effort, leaping towards the endzone with the ball outstretched. His hands hit the pylon, and his teammates went wild.

What happened next on Twitter was fun to watch.

TAYLOR HEINICKE TAKES IT ALL THE WAY 😱

Taylor Heinicke being a free agent in two months is fantastic little bit of chaos to throw into the offseason.

We demand Taylor Heinicke does this if Washington wins!

Taylor Heinicke reached a top speed of 19.29 MPH on this 8-yard TD run, traveling 39.1 yards from snap to the moment he crossed the pylon.

Heinicke is responsible for the two fastest speeds by a ball carrier in tonight's game (19.29 & 19.25 MPH).#TBvsWAS | Powered by @awscloud pic.twitter.com/dTT5ClukWf

before ever giving Taylor Heinicke a chance to start

Taylor Heinicke just pulled off the improbable, scrambling for a wild diving touchdown that put Washington right back in the game. 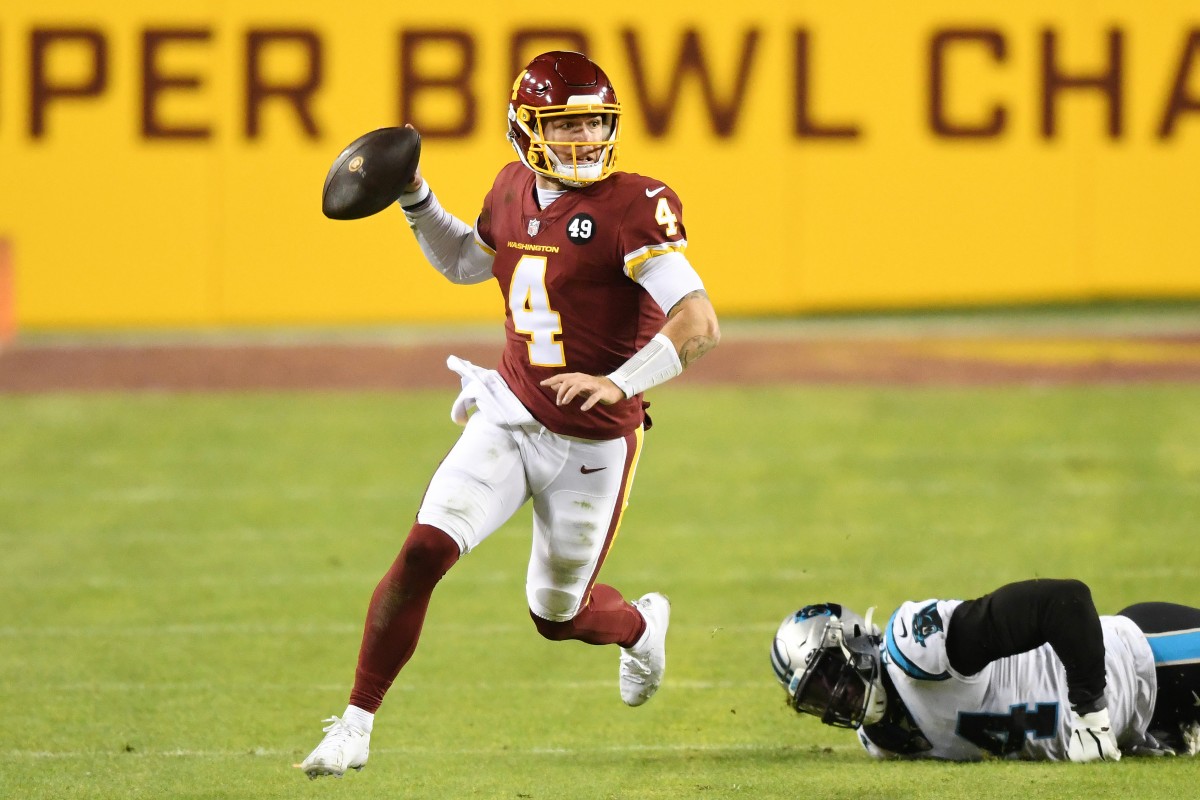 TAYLOR FREAKING HEINICKE! ARE YOU KIDDING ME!

It has been highlight play after highlight play for the undrafted QB in Washington, and he pulled off the miraculous in the third quarter on an elusive scramble that ended up with a touchdown after he was all but sacked for a big loss in the backfield, pulling WFT to within two points.

Heinicke has been incredible on the night, giving new life to the Washington offense and allowing them to stay in the game with the Bucs, who have a dynamic offense of their own. If nothing else, Heinicke has absolutely earned a spot on Washington’s roster in 2021.

Both Terry McLaurin and Antonio Gibson will play for Washington, while QB Alex Smith has been ruled out for the game on Saturday. 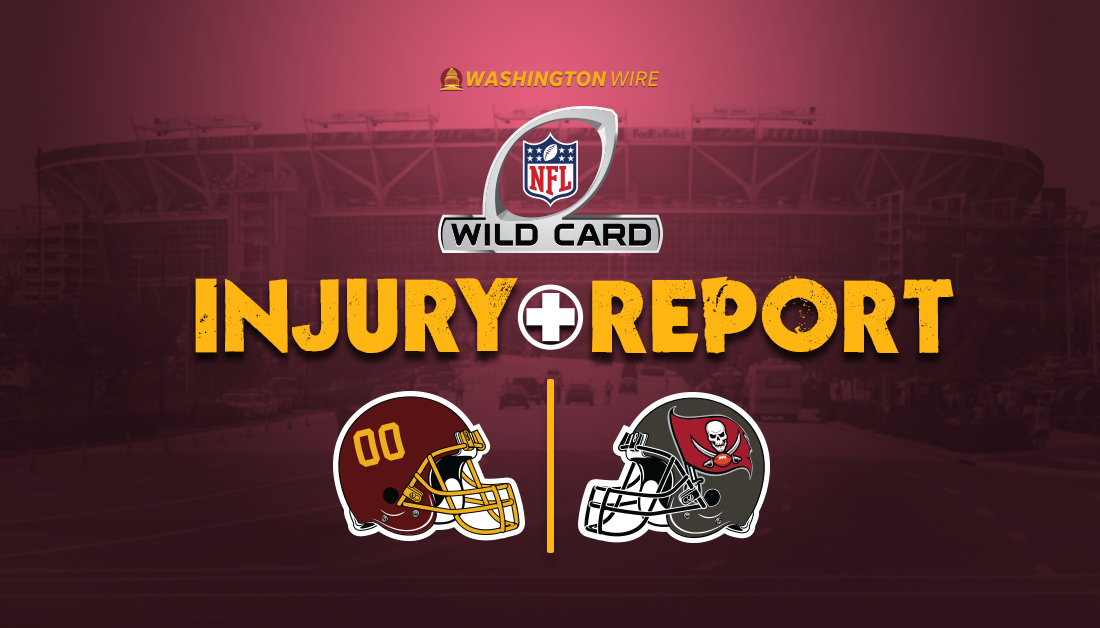 We got the news earlier in the day that Washington quarterback Alex Smith would not be active for the wild-card game against the Tampa Bay Buccaneers on Saturday night, leaving QB Taylor Heinicke to receive his second-career start and first career playoff start.

Outside of the QB position, Washington got some good news, with both WR Terry McLaurin and RB Antonio Gibson being ruled active for the game, expecting to assume their normal workloads. Both players were held out of full practice this week, dealing with a couple of different leg injuries, but Washington will get both of them on offense in a game where they need all the help they can get.

For the Bucs, both WR Mike Evans and CB Carlton Davis have been ruled active, so Tampa will be with most of their starting players as well, minus LB Devin White, who is on the COVID/Reserve list.

Alex Smith will not be able to go against the Bucs in Washington’s playoff game on Saturday night, giving the start to backup Taylor Heinicke, who has looked good in limited action this season. 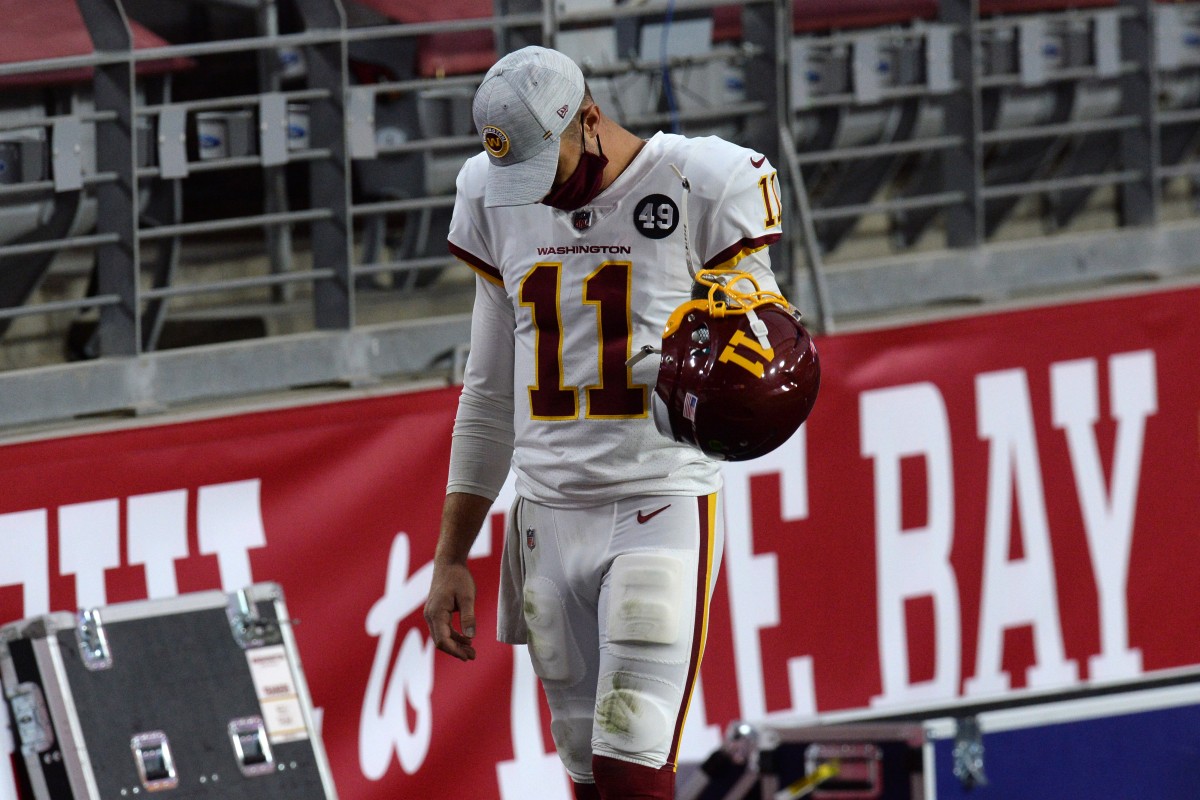 Per source : Alex Smith will be inactive.

It will be the backup QB with a single quarter of action this season who gets the start for the Washington Football Team on Saturday night in a wild-card game against the Tampa Bay Buccaneers.

Alex Smith, who was hoping to get the start, has not progressed enough from his calf strain injury, and ultimately will be unable to play against Tom Brady and the Bucs in Washington’s first playoff game since 2015.

Coming into this weekend, we all knew this was a distinct possibility, with Smith being held out of practice all week while trying to nurse his calf back to health, which has been hobbling him for several weeks now. On Friday night, a report came out that Smith was still feeling a lot of soreness in his leg, but he would wait to see how it felt on Saturday morning before making a decision. On Saturday morning, there was still no word, which might have provided some more hope, but ultimately the decision was that Washington would be better off with a healthy Heinicke, rather than a hobbled Smith.

In his one-quarter of action this year against the Carolina Panthers, Heinicke earned a little bit of trust from his teammates, going 12-for-19 for 137 yards and a touchdown in relief of a benched Dwayne Haskins. The most notable reaction came from DE Chase Young, who appreciated the confidence that the backup QB played with.

With as strong as Washington’s defense is, and as stagnant as the offense has been even under Smith, putting Heinicke under center is not exactly a death sentence for the burgundy and gold. If they can stick to their gameplan and make life tough on Brady, even a handcuffed offense could be able to get the job done.