Steelers wire gets the inside info on the Dallas Cowboys ahead of this week’s game. 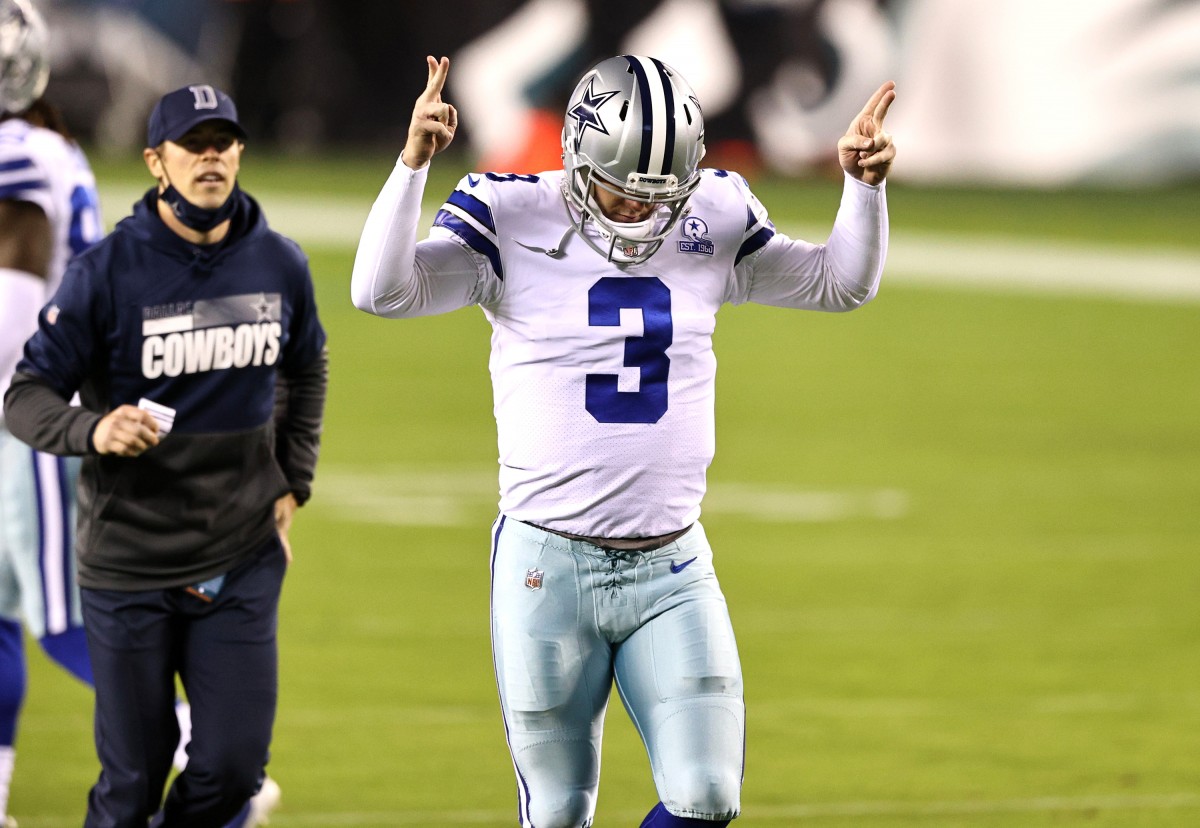 Every week we reach out to our resident expert on the Pittsburgh Steelers upcoming opponent. This week talked to our friend KD Drummond over at Cowboys Wire about the struggles the Dallas Cowboys are having and if he thinks the Cowboys can beat the Steelers this week.

Ben Roethlisberger lets everyone know how he turned the Steelers offense around against Baltimore. 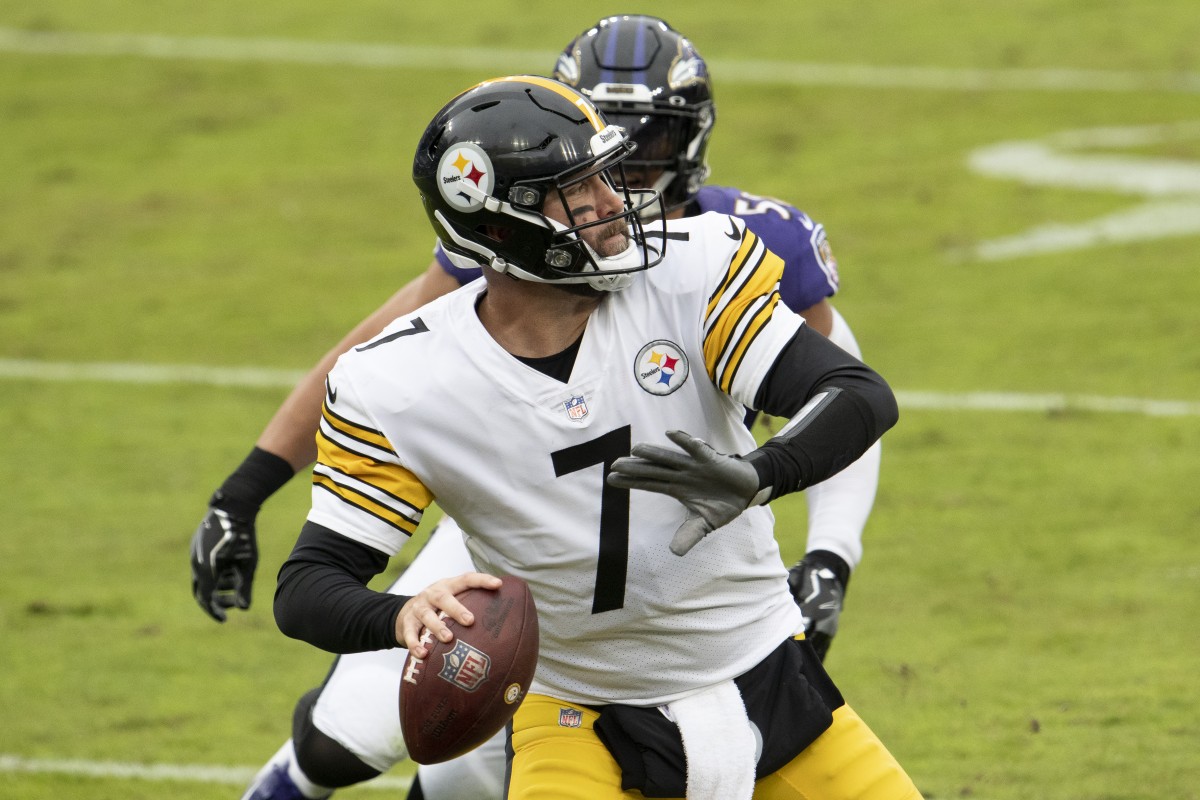 .@_BigBen7 spoke to the media about playing three straight road games, improving the unit, the win over Baltimore, prepping for the Cowboys and more.

When the Pittsburgh Steelers came out after halftime against the Baltimore Ravens the team knew changes had to be made. The Ravens had controlled the Steelers offense completely in the first half and looked like they were going to cruise to a win. Steelers quarterback Ben Roethlisberger had other plans and he cranked things up on offense with tempo and some good old backyard football. Big Ben admitted as much when he spoke to the media on Wednesday.

The second half probably 90 percent made it up as we went. Truthfully, it was—I know I kind of talked about it after the game — but line, here is the protection. Receiver, you go over here this time. You go over here.

The whole scenario is a good news/bad news situation. The good news is the Steelers have a future Hall of Famer under center who can walk to the line of scrimmage, read a defense and literally create a play on the fly to beat one of the best defenses in the NFL.

The downside is this has to happen at all. Between Offensive coordinator and quarterbacks coach Matt Canada, neither guy could put together a gameplan or adjustments to get the offense going.

Pittsburgh Steelers defensive tackle Stephon Tuitt was huge for Pittsburgh in their win last week and the NFL noticed.

.@DOCnation_7 has been named AFC Defensive Player of the Week 💪

The forgotten superstar on the Pittsburgh Steelers defense is defensive lineman Stephon Tuitt. Tuitt isn’t as flashy as some of the other guys but his contributions to the defense are tremendous. This week Tuitt finally got the recognition he deserves as he’s named AFC Defensive Player of the Week.

Tuitt and the rest of the Steelers defense were tasked with trying to slow down Baltimore Ravens quarterback Lamar Jackson last week, and Tuitt was more than up to the challenge.

Tuitt finished with nine total tackles, two sacks and three tackles for loss. When healthy, Tuitt is practically unstoppable and if you want to teach young players the importance of maximum effort, put on Tuitt’s film from this game.

Steelers Wire hands out grades after the Steelers big win over the Ravens. 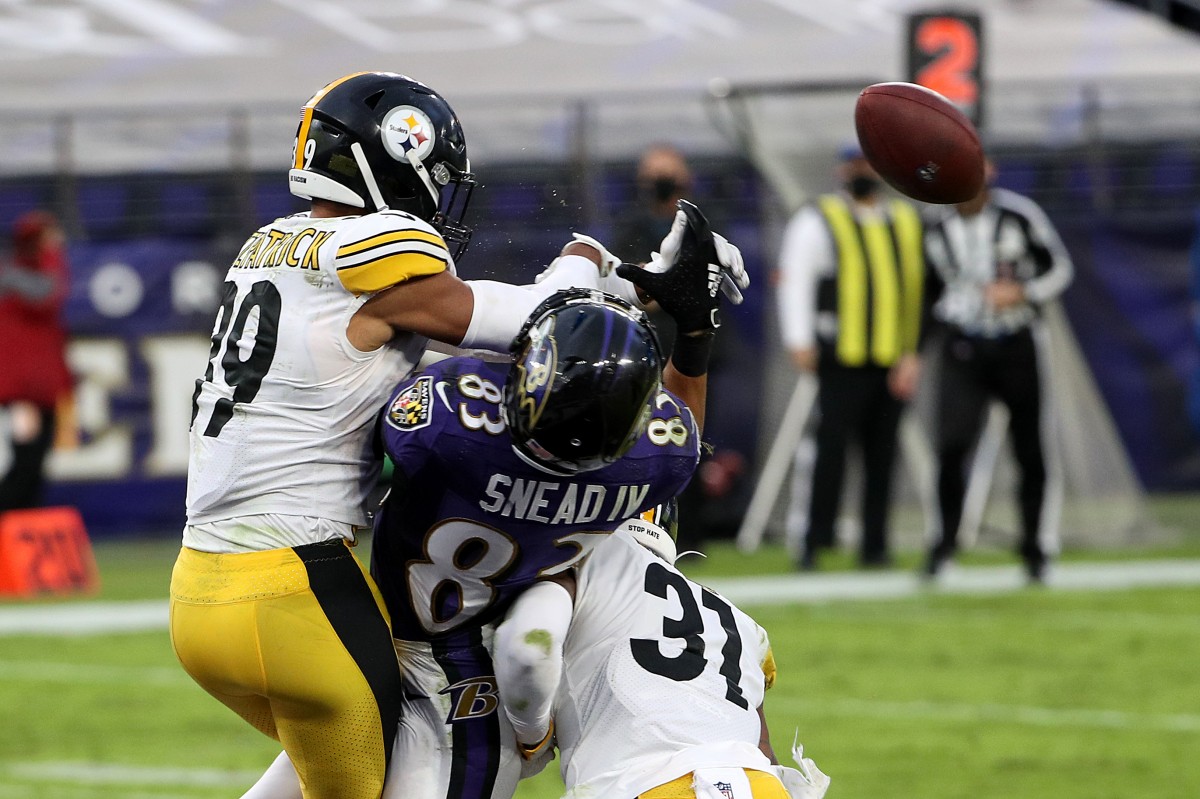 It isn’t always pretty but a win is a win. The Pittsburgh Steelers went into hostile territory and beat the Baltimore Ravens 28-24 to extend their lead in the AFC North to two games. After falling behind early Pittsburgh stormed back in the second half to pull off the improbable comeback.

Here are the grades for this week’s game.

Steelers Wire talks about the impact Robert Spillane had on the defense on Sunday. 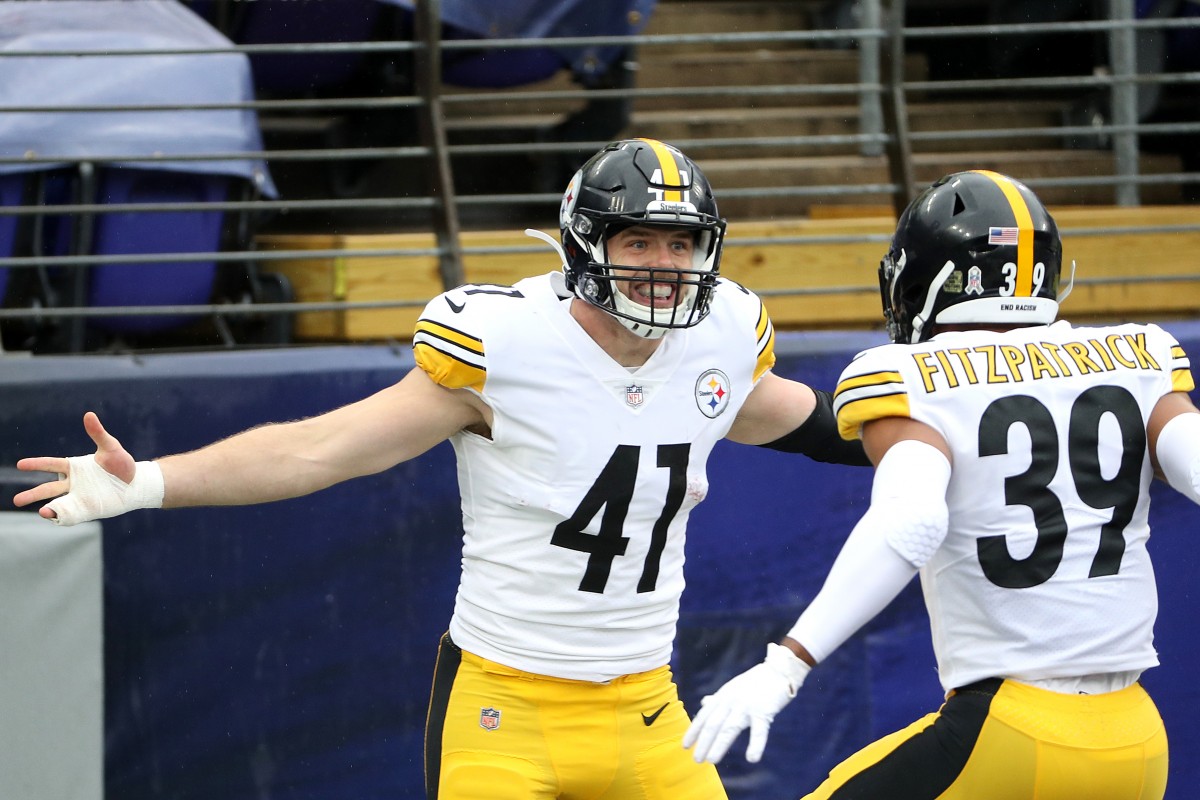 Robert Spillane to the house for the @Steelers!

The Pittsburgh Steelers are firm believers in the mantra of “next man up.” It doesn’t matter who goes down, the next player in line has to do their job. Pittsburgh handed the starting inside linebacker job to Robert Spillane when Devin Bush went down and after a solid first start against the Tennessee Titans, Spillane took another step forward against the Baltimore Ravens.

Spillane led the team with 11 total tackles and on the Ravens’ first offensive drive, turned an interception into a touchdown.

Overall, the Steelers run defense was pretty awful. One of the worst games of the Mike Tomlin era to be honest. But don’t put that on Spillane. He rarely misses a tackle, shows nice closing speed and continues to be one of the most physical defenders on the team. Games like this one where the opposition wants to pound the football on the ground are what Spillane is made for.

Steelers vs. Ravens football is the best of the best, and this game was befitting of that rivalry. 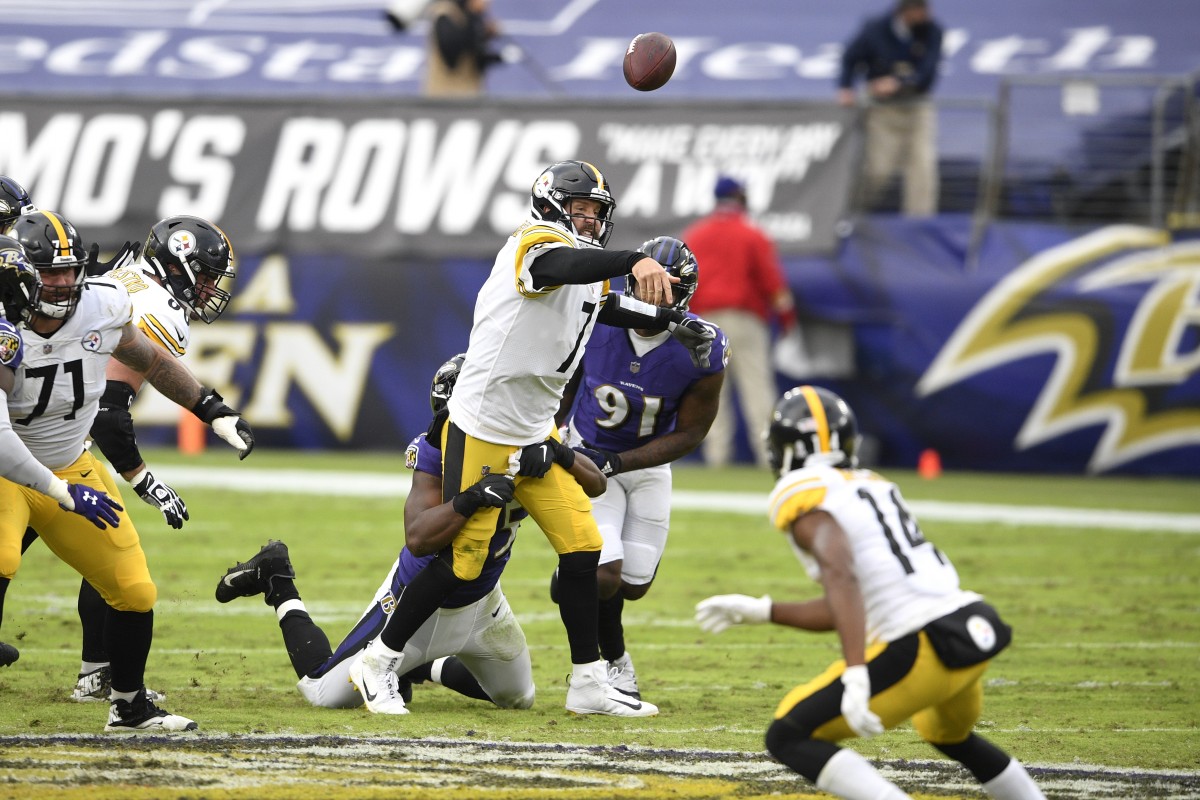 The Baltimore Ravens came into this Week 8 matchup with only one loss under their belt. In a post-game interview with CBS, Steelers quarterback Ben Roethlisberger was asked what it’s like to beat the Ravens on the road in dramatic fashion.

“It’s not always pretty,” Ben said with a grin. “But we find a way to get it done. I’m just so happy for these guys.”

When two of the league’s best defenses face each other, especially in-division, the win normally comes down to whichever team last possessed the ball. But because of outstanding defensive play, the Ravens couldn’t get it done.

“I’m just glad they’re my defense,” said Roethlisberger. “They’re so much fun to have as a part of this game. They stepped up when they needed to.”

After a huge pick-six by linebacker Robert Spillane on Baltimore’s first drive, the Steelers weren’t able to find a groove. Thankfully, due to halftime adjustments and Ben calling plays at the line, they turned things around.

Robert Spillane to the house for the @Steelers!

“I’m proud of the way all those guys played,” the quarterback said. “JuJu got some really tough yards and took a beating and did some really good things. We spread it out and did some different things.”

After a quiet first half for the Steelers’ offense, they came alive in the last two quarters. Smith-Schuster had seven receptions for 67 yards. Tight end Eric Ebron and wide receiver Chase Claypool both pitched in scores on 42 and 48 yards, respectively.

Pittsburgh is 7-0 for only the second time since the franchise was founded in 1933.

Mike Tomlin was not ready to hand out any praise to defensive tackle Isaiah Buggs despite his solid game. 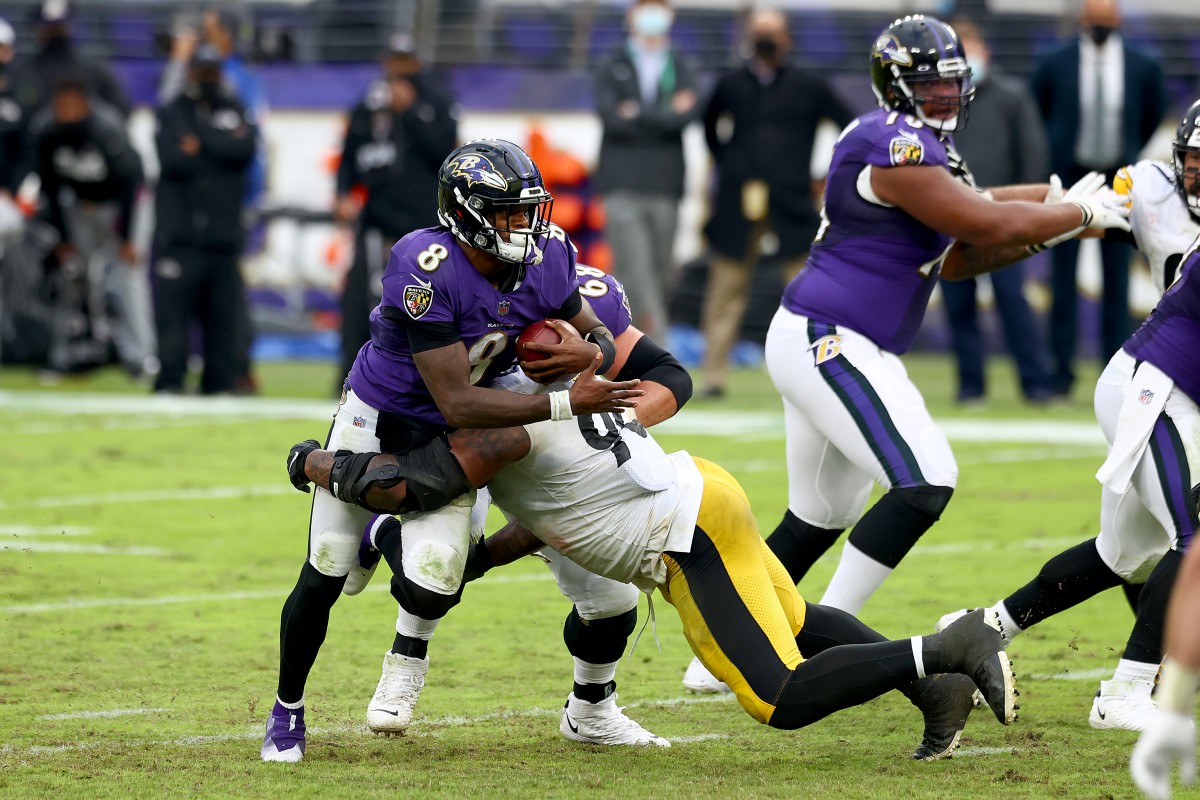 Tomlin is in NO mood to credit any of his individuals. Asked about Isaiah Buggs' big plays, Tomlin (paraphrasing) says:

We had no other choice but to use him. And he wasn't any good when he 1st got in, so it was about time he made a play.

A guy who helped lead the charge in the second half was defensive tackle Isaiah Buggs. Buggs, who was playing in place of the injured Tyson Alualu struggled to get off his blocks in the first half.

But in the second half, Buggs stepped up on multiple plays including a key stop of Jackson late in the game. But if he was hoping for praise from head coach Mike Tomlin, you can forget that. Tomlin gave his usual spiel when it comes to young players and made sure we all don’t forget how poorly Buggs played early and that he was only in the lineup because the team had to play him.

Depending on the status of injuries of guys like Cam Heyward and Alualu, we could see a lot more of Buggs, a former sixth-round pick.

The Pittsburgh Steelers came back after halftime to turn things around and move to 7-0. 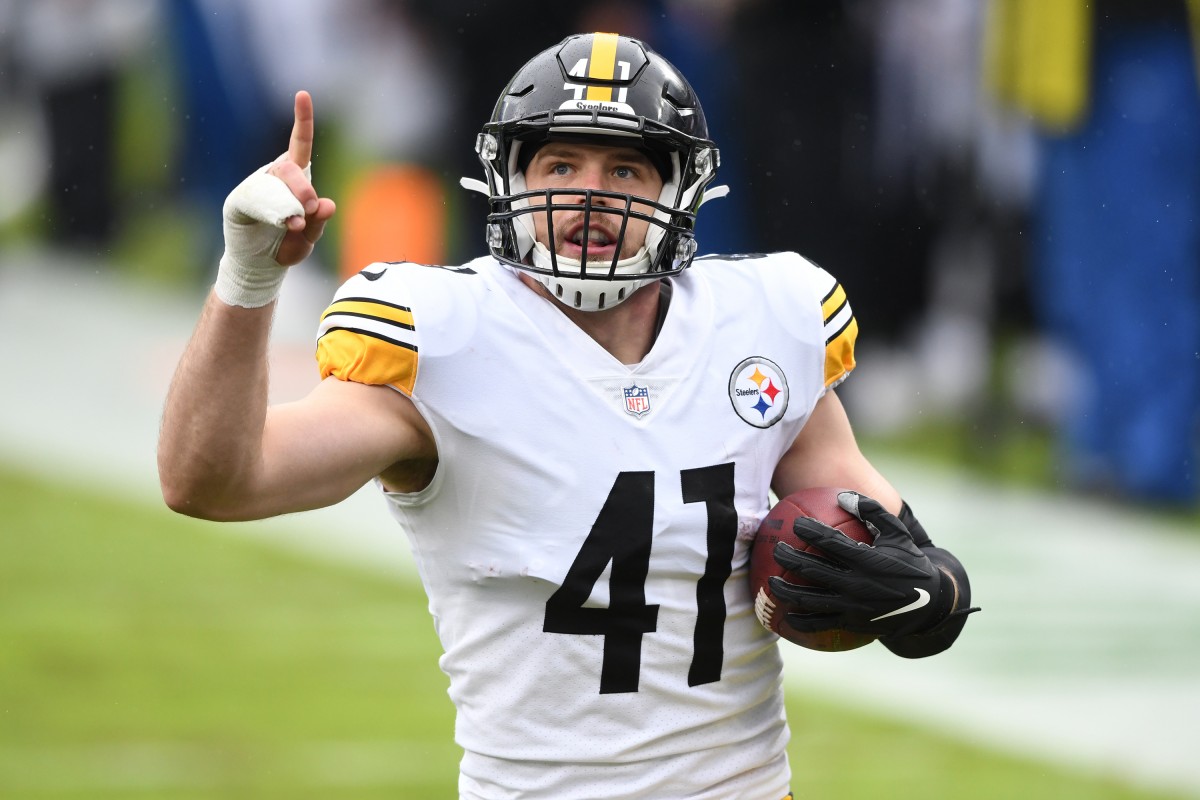 Going into halftime, it looked like the Pittsburgh Steelers were packing up their tents and going home. But then the second half happened and the Steelers found a way to not only come back against the Baltimore Ravens but to beat them on the road in exactly the fashion you would expect to extend their record to 7-0.

Offensively, quarterback Ben Roethlisberger came alive in the second half. After letting the Ravens defense bully them in the first half, Roethlisberger finished the game with 182 passing yards and two passing touchdowns, almost all of which came after halftime.

His favorite target was wide receiver JuJu Smith-Schuster seven receptions for 67 yards including multiple catches in the second half to keep drives alive.

The defense had a miserable effort stopping the run but to make up for it were ballhawks creating turnovers and sacking Ravens quarterback Lamar Jackson. Pittsburgh forced three fumbles and picked off Jackson twice. The best part was the Steelers were able to turn those turnovers into points.

There is no understating how important this win is for the race in the AFC North. Pittsburgh’s next game is a road matchup with the Dallas Cowboys.

The first half was as bad as it could be for the Steelers and they must make some adjustments to stay in this game. 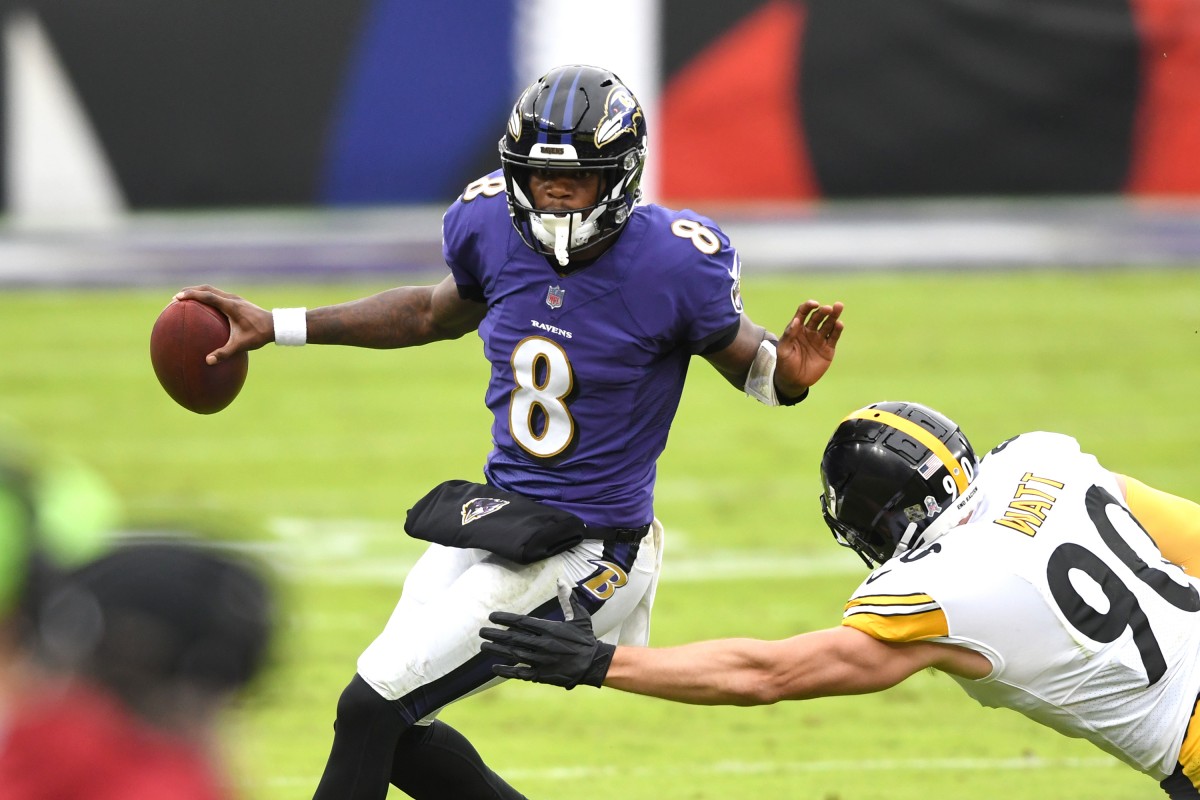 The Pittsburgh Steelers have had some ugly stretches this season on their way to 6-0. But the Steelers first half against the Baltimore Ravens might be the worst collective half of football this Steelers team has played all season. The Ravens capped their first half with a late field goal as the clock expired to go into halftime 17-7.

This is typically the point where I talk about what went right and what went wrong. But in this case everything went wrong. Offensively, quarterback Ben Roethlisberger continues to float his passes and stalling out drives. The Ravens aren’t doing anything special on defense but the Pittsburgh offense is completely flat.

Defensively things are worse. The Ravens have been able to run the ball at will against the best rush defense in the NFL. Linebacker Robert Spillane picked off Lamar Jackson on the opening drive and return it for a touchdown and it has been all downhill from there. Lack of depth on defense is really showing once again and the Ravens are taking advantage.

The Steelers will have the football to start the second half. We really hope to see a team come out fired up and can at least try to match the intensity of the Ravens.

It looks like the Steelers will be without defensive tackle Tyson Alualu. 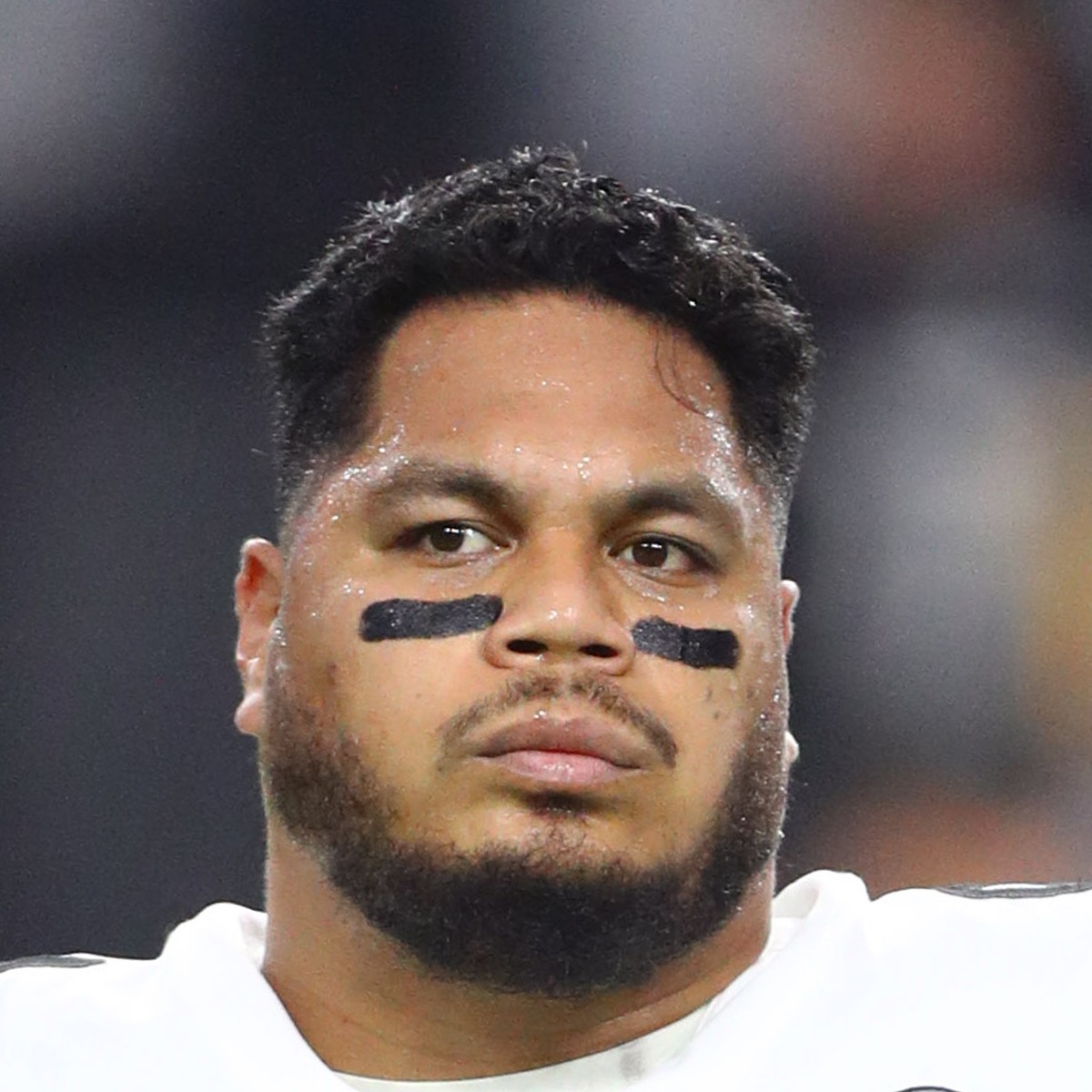 #Steelers DT Tyson Alualu sustained a knee injury and is doubtful to return to today’s game.

It looks like if the Pittsburgh Steelers are going to slow down the Baltimore Ravens, they are going to do it without defensive tackle Tyson Alualu. The team has announced Alualu is doubtful to return with a knee injury.

This means we will see a lot of Isaiah Buggs for the rest of the game which isn’t great for a Steelers team focused on slowing down the Ravens run game.