A little something our USF/Jags readers may be interested in. 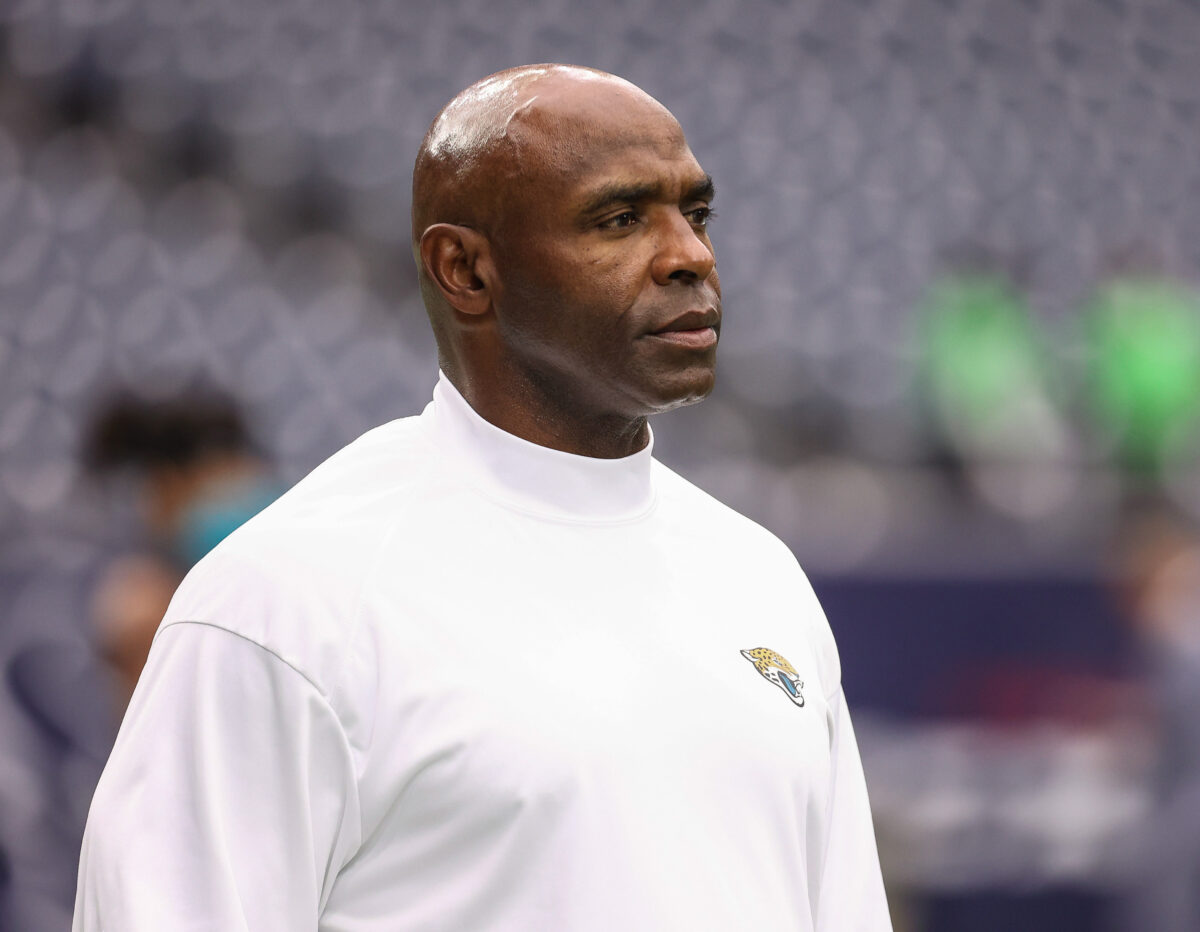 When Urban Meyer put together the Jacksonville Jaguars’ staff, he brought several familiar faces from the collegiate game with him. Of course, Charlie Strong, who he named the second man in charge and interior linebackers coach, was one of them and a face that Jags fans not only recognized from Florida but from his time at the University of South Florida, too.

While those days are behind Strong, though, and his focus is on the professional game currently, it appears he’ll have an NCAA violation to deal with if he ever returned to college before the end of the 2022-23 academic period. On Friday, it was reported that USF received three years’ probation in addition to Strong (and other USF coaches) receiving NCAA penalties for having staffers participate in practice.

The Tampa Bay Times pointed to several specific events (that the staff was aware of) under Strong’s tenure that violated the NCAA’s rules. In 2018, there was one instance where a football staff member (who wasn’t authorized as an on-field assistant), aided with coaching the Bulls’ tight end group.

The following year, six other football personnel members who weren’t authorized to coach were also caught for similar actions. That group included a personnel member that led special team drills and film evaluations, three others who often participated on the scout team, and two who sporadically aided with coaching players during practice.

While none of these fines have anything to do with the NFL, fans will hope that none of these acts translate to the Jags. The reason for that is because the NFL’s fines are a lot more pricey for the organizations and coaches as Meyer witnessed in training camp.

While CJ Henderson has only taken the practice field twice since camp started, Jags AHC, Charlie Strong, believes he has time to be ready for the regular season.

The Jacksonville Jaguars have been a trending topic the last two days, and surprisingly enough, it wasn’t because of Tim Tebow. Instead, it was due to teams believing they were open to trading 2020 ninth overall pick CJ Henderson, who is one of the youngest players and has a lot of upside.

This report, which came from ESPN’s Jeremy Fowler, came as many hurdles have gotten in the way of getting Henderson prepared for the 2021 season. After starting in eight games as a rookie, he was placed on injured reserve with a groin injury after Week 10’s game against the Green Bay Packers. He wasn’t able to return for the rest of the season and eventually had labrum surgery, which limited his offseason activities.

Then when he finally was able to return for training camp, he had to be placed on Reserve/COVID-19 missing the first eight actives before briefly returning for Day 9 and missing Day 10 for personal reasons. However, on Tuesday (the team had Monday off), Henderson returned to the practice field, and despite the trade rumors that have surfaced, assistant head coach Charlie Strong expressed how excited he was to see Henderson back.

“It is good [to see him back],” Strong said. “He’s a really good player and the thing about it is we know this; he can make us a lot better football team. Just to see him get around us and get out on the field and go to work was really exciting.”

Henderson is a player with a lot of potential, and with him, the Jags’ secondary could be a very respectable unit if he improves in his second year. And while the team could go into 2021 with Shaquill Griffin, Tyson Campbell, and Sidney Jones IV as their top-3 corners and succeed, having Henderson (if focused and committed) only gives the group a better chance.

If Henderson can avoid any setbacks from this point on, he has a chance to head into the regular season and be a valuable contributor — if not a starter. The team has yet to take the field for their preseason game, and for that reason, Strong said he’s confident that Henderson can be ready before the Jags’ Week 1 trip to Houston.

“I think that we still have enough time here because we’re a month still out from playing our first game,” said Strong when asked if the time Henderson missed will hurt him. “I know we have these preseason games, and they will always be good to get him back so he can get out there and run around. But just knowing that he can get back and that we can just teach him the defense and he can learn it, because we’re doing a lot on defense and that’ll be good for him to get back and just go through the whole learning process. Even if he can’t come out to practice, just being in the classroom really helps.”

If he’s going to be a part of the Jags’ roster, the next three weeks will be important for Henderson. However, if more issues pop up that prevent him from taking the field, or the team has a hard time motivating him, maybe a trade might be the best option for both parties.

“…it’s really been exciting just to see how much they’ve come to work each and every day and how much they’re buying into what we’re trying to get them to do,” Strong said. 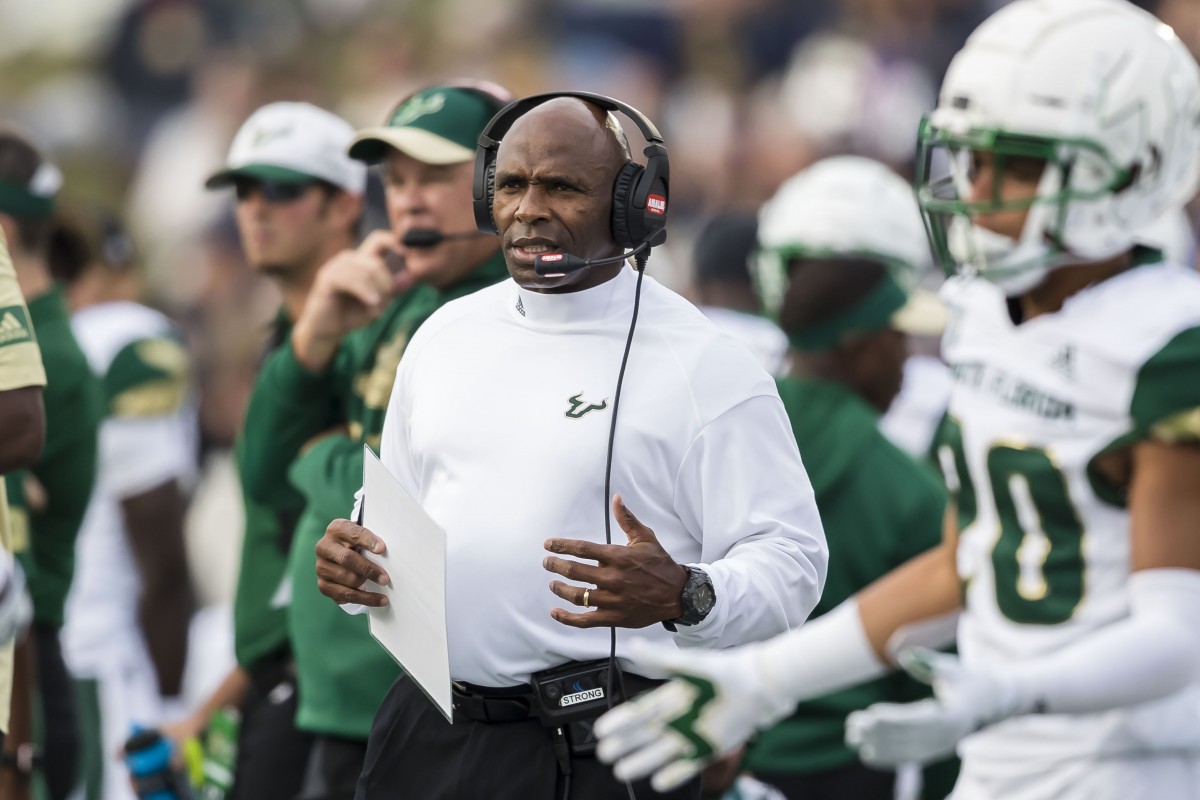 New Jacksonville Jaguars head coach Urban Meyer isn’t the only one on the staff who will be coaching in the NFL in 2021 for the first time ever. Though he loaded his staff with a number of experienced professional assistants, he also brought in a familiar face.

Charlie Strong has a long history with Meyer. The two were assistants at Notre Dame together from 1996-98, and when Meyer received the head coaching job at Florida in 2005, he brought in Strong as his defensive coordinator, a position he held until 2009.

After head coaching stints at Louisville, Texas and South Florida, Strong will be working with Meyer again as the assistant head coach and inside linebackers coach for the Jaguars.

On an episode of the “Another Dooley Noted Podcast” with Pat Dooley, Strong discussed the adjustment he’s had to make coaching at the professional level.

“When you think about the differences between just the college athletes and the professional athletes, it’s all about can you create value for them,” Strong said, according to quotes transcribed by Saturday Down South. “The thing about a professional athlete, he just wants to extend his career because it’s a living for them and if you can help them extend their career, they’re more than willing to listen, Pat. We’ve had no resistance from any of the players, and it’s really been exciting just to see how much they’ve come to work each and every day and how much they’re buying into what we’re trying to get them to do.”

Joining a team coming off a 1-15 finish (the worst in franchise history), it’s clear that the new staff needed to bring a jolt to the locker room. According to Strong, the coaches are already seeing that buy-in from the players.

“Coming in as a completely new staff and then coming in with Urban, I just think that the players are really buying in and trying to do everything you ask them to do,” he said. “When you have a plan in place, which he does have a plan in place, then the players are more willing to listen. And then these guys are professionals, so they understand that our success is going to be how we go play is going to be more for them. And so they’re going to try to do everything you ask them to do. Like I said, it’s all about creating value. How do I create value for myself?”

The track record of first-time NFL coaches isn’t great, but this staff enters with one of the best situations one could ask for. The team has a rookie potential star quarterback in Trevor Lawrence and lots of cap space. The Jags are undoubtedly a team set up to succeed in the future, and it seems the staff likes the early returns it’s seeing.

Once upon a time Charlie Strong was working alongside McCray and Tebow when they were collegiate players and now he’s doing so in the NFL. 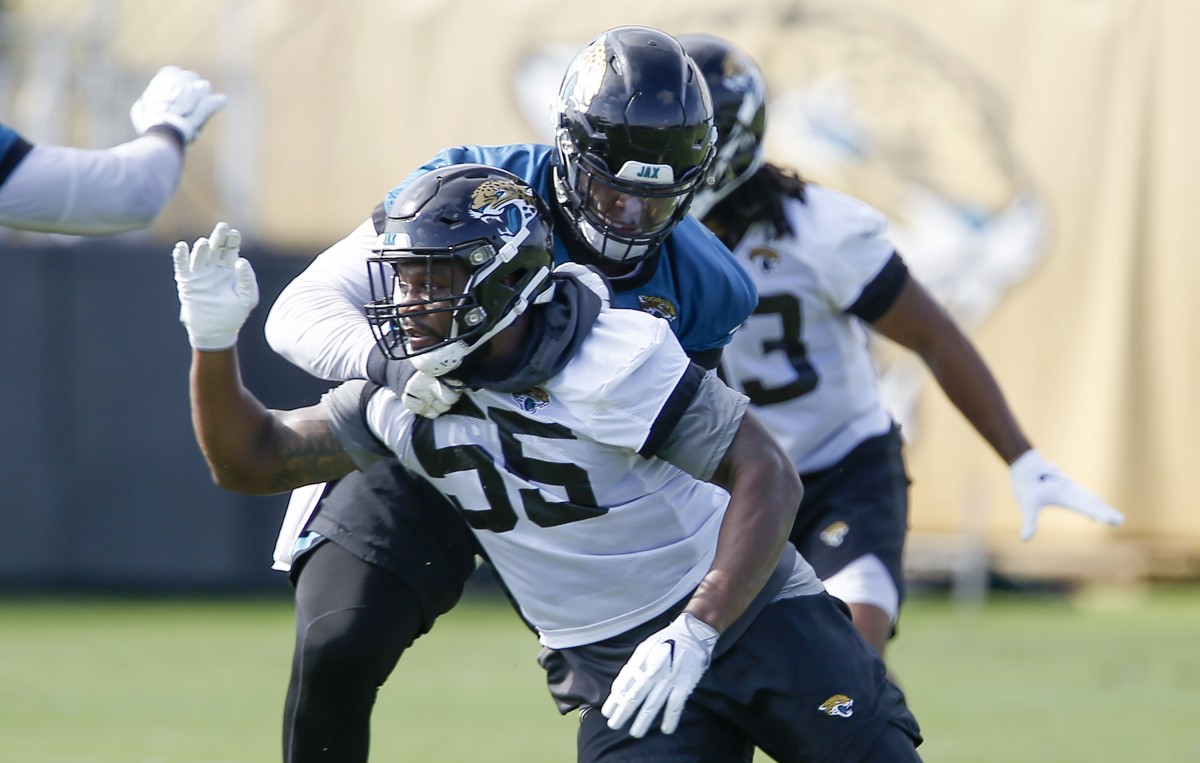 Alongside Urban Meyer, Charlie Strong and the Florida Gators’ staff was able to build one of collegiate football’s best teams over a decade ago and the legacy that was built at the time is still strong. Now, both Meyer and Strong have found themselves working together again on the NFL level with the Jacksonville Jaguars, and two of the key players from their Gators run are once again being coached by the duo.

One of those players is pass rusher Lerenetee McCray, who was a part of Florida’s defense from 2008-12. With eight years of NFL experience to his name as a special teamer and edge rusher, Strong said he feels the former Gator is a valuable asset to the team, especially with him understanding the current staff almost better than anyone.

“We always felt like when we recruited him at Florida that he had some talent, very talented then, a guy who’s big and athletic, a guy who can run,” Strong said. “But then, just being in the league the number of years that he’s been in there has been really very impressive. You look at the things that he’s done when he was at Denver being on the special teams.

“When we first got the job here, he comes walking in my office and I just forgot that he was here and was just kind of shocked. But just seeing him work here the last few weeks, he’s been very good. I think Lerentee [McCray]’s one of those guys who’s going to give you everything he’s got, and he understands what we’re looking for because he had played for us before.”

Earlier in the week, Meyer shared some interesting insight on McCray, stating that he’s been working out at the SAM linebacker position with a few others like Leon Jacobs and K’Lavon Chaisson. That means he’s a part of a group where he’s the most experienced player by a long shot, which could bode well for him during final cuts as the Jags young team needs experience and locker room leaders.

After the Jags’ last minicamp practice, Strong was also asked about another player he knew from his time with the Gators in Tim Tebow. And while his focus has been to coach the interior linebackers as a positional assistant, Strong said that Tebow is handling himself well by his eyes.

“When you look at Teebs [Tim Tebow] and you look at just the following, you know whenever you say Tim Tebow, you know that you’re going to have just truly a mass following him, from the media to even just fans out there who want to know how he’s doing,” Strong said. “I think he’s done a very good job of just handling himself and just embracing it.

“What you wonder a lot of times when you get a player like that who’s been away from it is how is he going to be accepted in the locker room, and I think the players have done an unbelievable job at just taking him in. But he’s handled himself the right way too and he wasn’t one of those guys who tried to push himself on them. He just let everything happen and he’s done a very good job at that.”

This is certainly good to hear from a coach who knows Tebow personally and further makes the case that things probably aren’t as chaotic at the Jags facility as some have been led to believe. That’s a good thing that should allow Strong, Meyer, Tebow, and McCray to focus on bettering the Jags as the team looks to rebound from a one-win 2020 campaign.