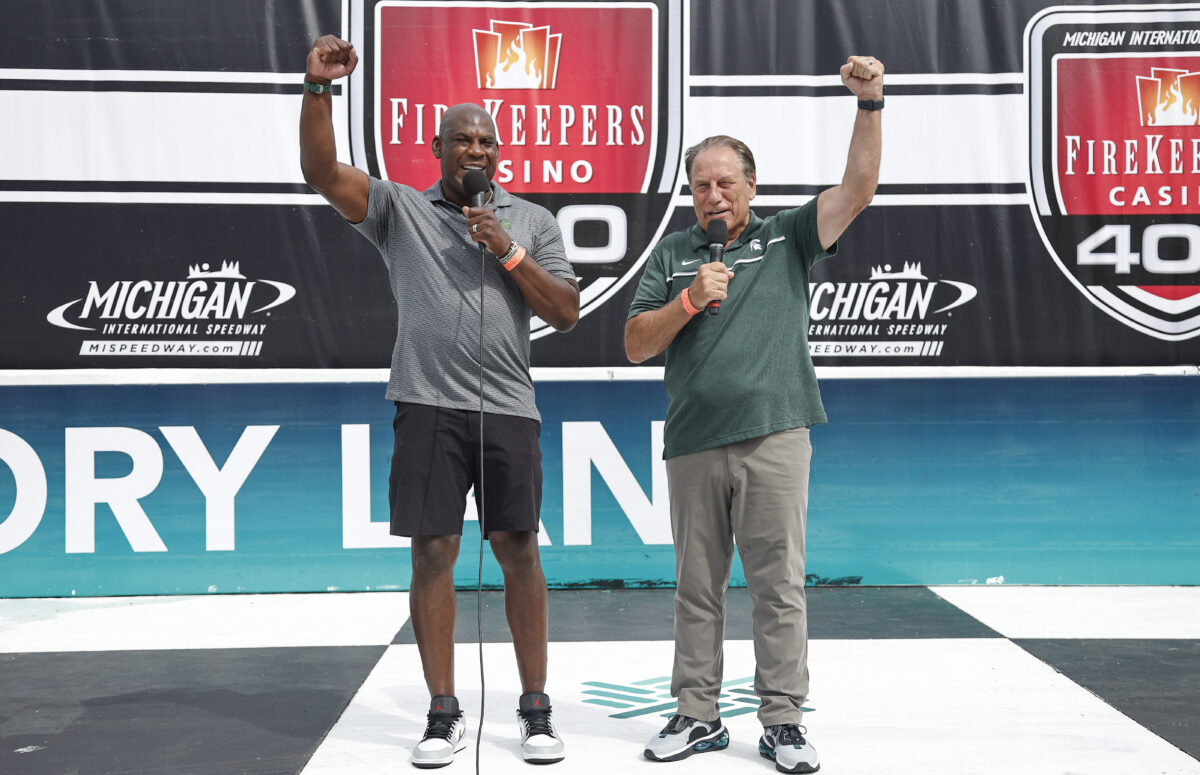 Michigan State’s Mel Tucker and Tom Izzo stepped away from the field and court on Sunday, and hit the race track as co-grand marshals at the NASCAR Cup Series FireKeepers Casino 400.

The race was held at Michigan International Speedway in Brooklyn, Mich. and featured some of NASCAR’s best race car drivers. Check out some photos of Tucker and Izzo from the event: 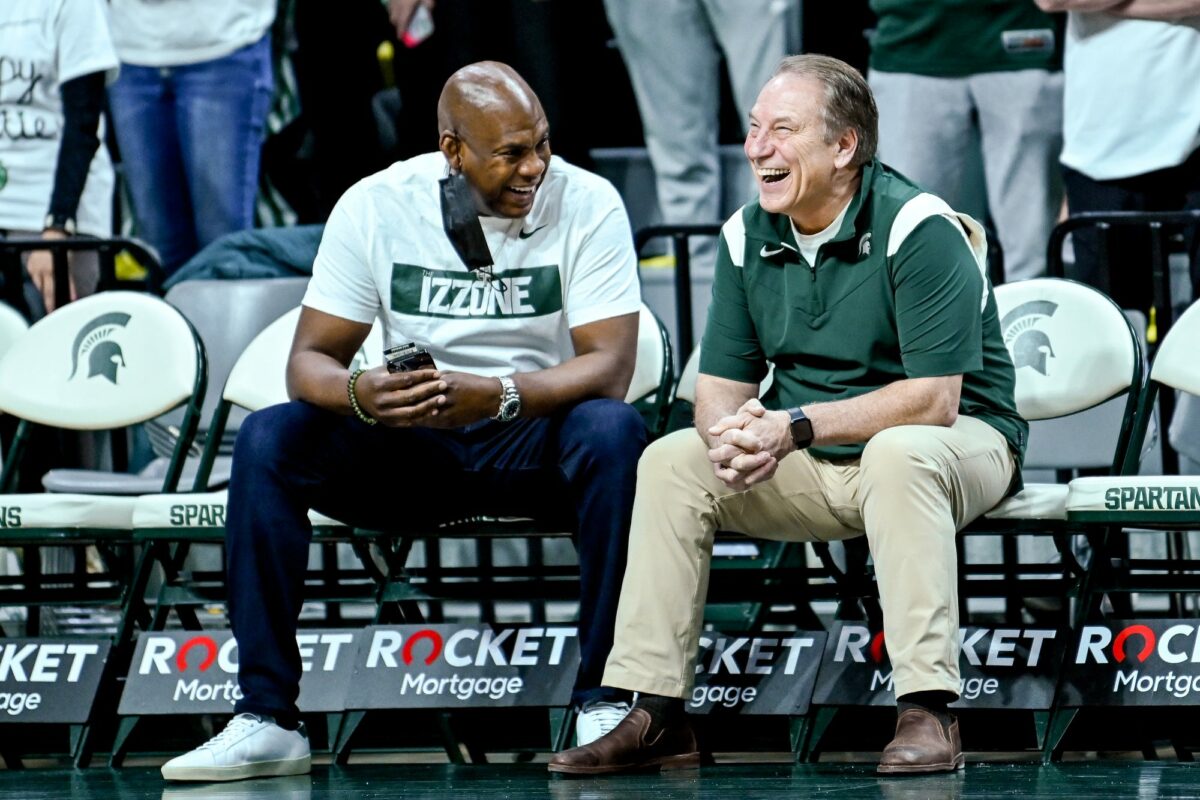 “I’m excited to serve as a co-Grand Marshal for the FireKeepers Casino 400 alongside my good friend and colleague Mel Tucker,” Izzo said in a statement. “Getting the chance to be a part of a NASCAR event was a thrill for me in 2010 and it was great to get the first-hand experience of seeing some of the best in their profession up close.  This is a tremendous opportunity for us to represent Michigan State Athletics and our great University at a NASCAR event and in one of auto racing’s premier facilities at Michigan International Speedway.”

As part of their responsibilities, the Spartan coaches will give the command “Drivers, Start Your Engines” to kick off the 200-lap race, according to MSUSpartans.com. The FireKeepers Casino 400 starts at 3 p.m. ET and will air on USA, MRN and SiriusXM NASCAR Radio.

Click here to learn more about the race and Tucker’s and Izzo’s responsibilities as co-Grand Marshals.

🏁 Start Your Engines 🏁@Coach_mtucker and Coach Izzo will serve as co-Grand Marshals for the NASCAR Cup Series FireKeepers Casino 400 on August 7th. 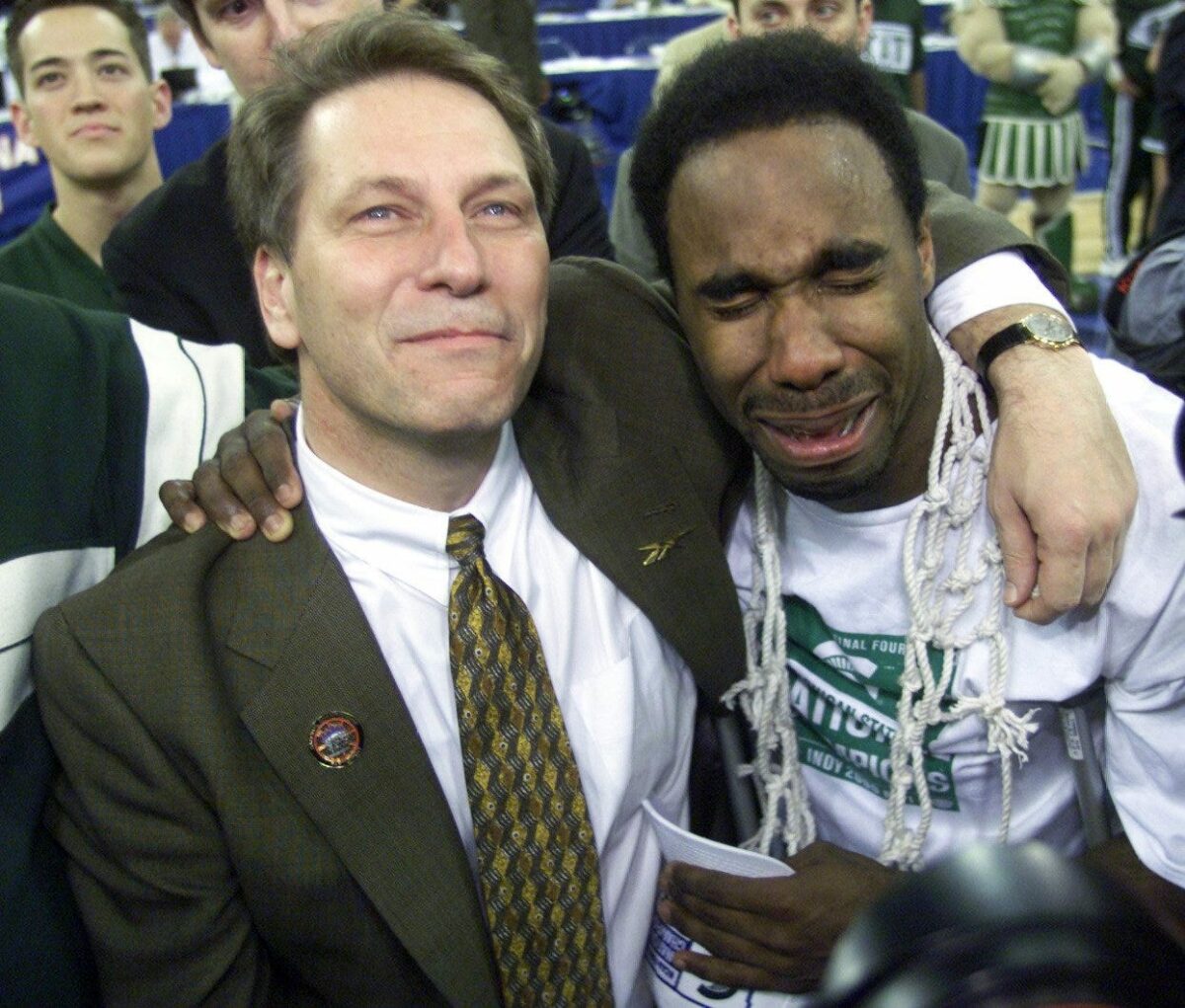 After last night’s NBA draft, Michigan State basketball has had a remarkable 22 players drafted during head coach Tom Izzo’s tenure. Xavier Tillman was taken No. 35 overall by the Memphis Grizzlies (reuniting with Jaren Jackson Jr.) and Cassius Winston was taken No. 53 overall by the Washington Wizards.

What Izzo has built at Michigan State is quite impressive, and he has routinely helped players elevate their profile and attract the attention of NBA players. Not every player has necessarily panned out in the NBA, but they at least gained the opportunity. Some, like Draymond Green, have exceeded expectations.

Below, we take a look at every Spartan who has been drafted under the watchful eye of Tom Izzo. 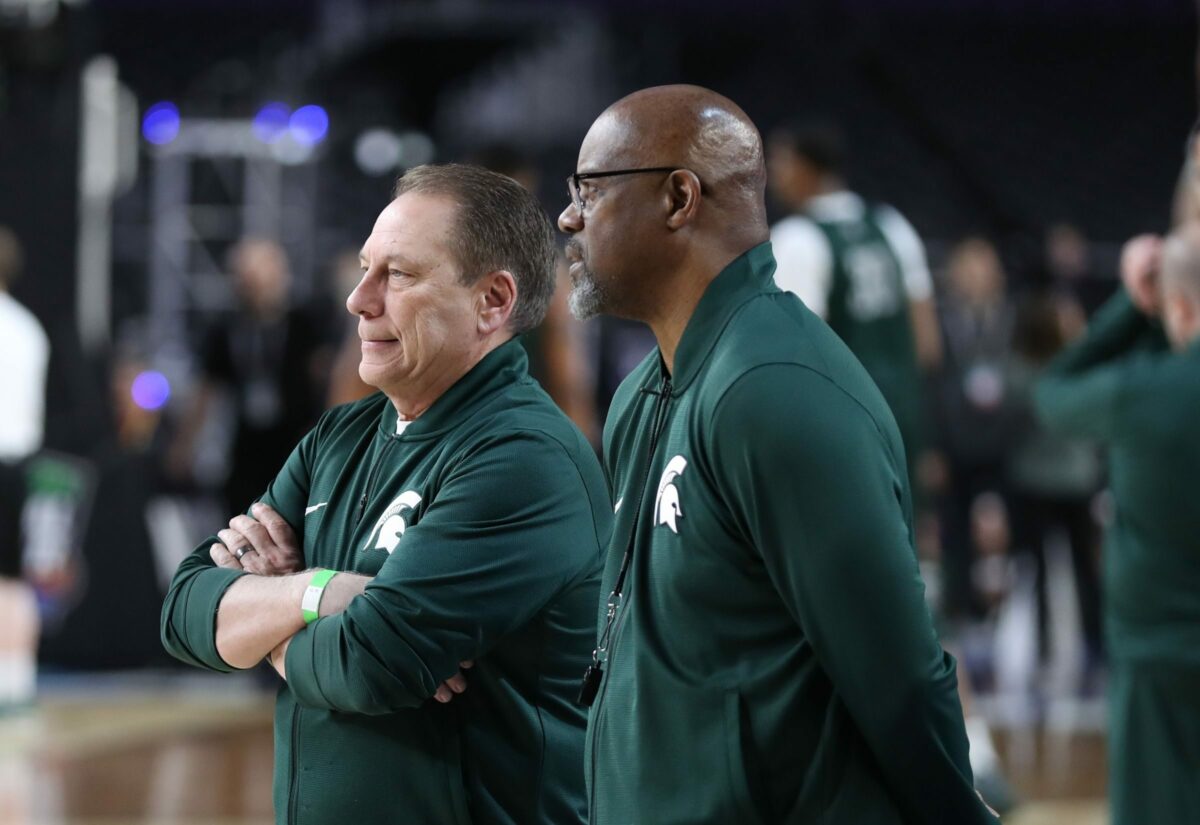 Tom Izzo met Mike Garland on his first night of college at Northern Michigan in the 1970’s. They have been friends and co-workers ever since. Now, Garland will ride off into the sunset, as he announced his retirement on Thursday, June 9.

Naturally, Tom Izzo released a statement on the retirement of his old friend, which you can see below:

“Words can’t truly express what Mike Garland mean to me. We’ve been friends since we met the first night in college and basically have lived the rest of our professional lives together. To say he’s just my friend doesn’t even scratch the surface of our relationship. He’s my brother for life.

“At the same time, we all know that life moves on and this is a great time for Mike to step into a deserved retirement after a tremendous career as a leader in college basketball. The impact he has had on not only this program, but also on nearly every young man he’s met while coaching in this sport is incredible. To say that Mike Garland was just a basketball coach would be a disservice. More than anything, Mike has been a teacher and a counselor who has provided life lessons to everyone who came through the doors at the Breslin Center, from players to managers to coaches to staff and definitely to me.

“Mike, his wonderful wife Cynthia and their beautiful family, Simone, Quentin and Michael Ray, have been a big part of our Spartan Family and I thank each of them for what they have done for us.

“If a friend is supposed to have your back, I always knew Mike had mine. Whether in college on the court together, driving his wife to the hospital when she delivered Quentin or just going for all the jogs through campus. Mike will be missed but never forgotten.

After spending 22 years on the MSU coaching staff, Mike Garland has officially announced his retirement 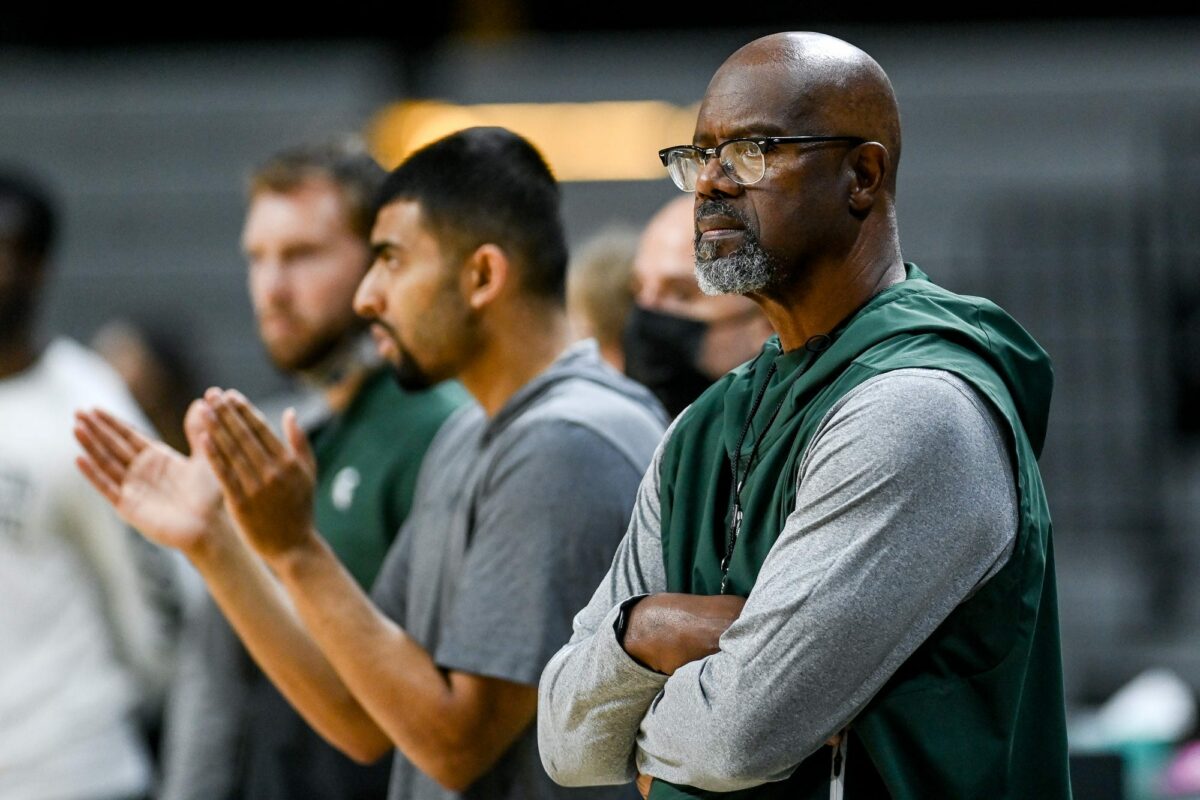 Garland released this statement on his retirement:

“I’ve worked alongside so many great people here, but the part of the job I’ve always cared for most has been the opportunity to work with young men and impact their lives, each of whom I wish I could mention by name.

“There have been a lot of successful moments on the court here and that’s what Tom has built, one of the best college basketball programs in the country.  It’s been an honor to be a part of those championships and Final Fours and to see so many of our players go on to play professionally.  I’ve been just as proud to see so many of our players have success in the business world and to become fathers with wonderful families.

“You don’t get the chance to work with a friend for so long like I have with Tom Izzo since we met at Northern Michigan in the early 1970s. He gave me the opportunity to be a part of this program when he became the head coach in 1996 and there is nothing I regret about the decision.

“My wife, Cynthia, and my family have grown up here and Michigan State is a very special place and will always be part of us.

“I always thought that Chief (Tom) and I would share the day of our departure together. And of course I could have given him a few more years to make that dream come true, like all the others we have shared together. But after several months of thought and reflection, while sitting at the hospital bedside of my son (Michael Ray), I decided it was best for my family, while I’m in great health, to give up the game I love to pour more of myself into my wife, my children and eight grandchildren.” 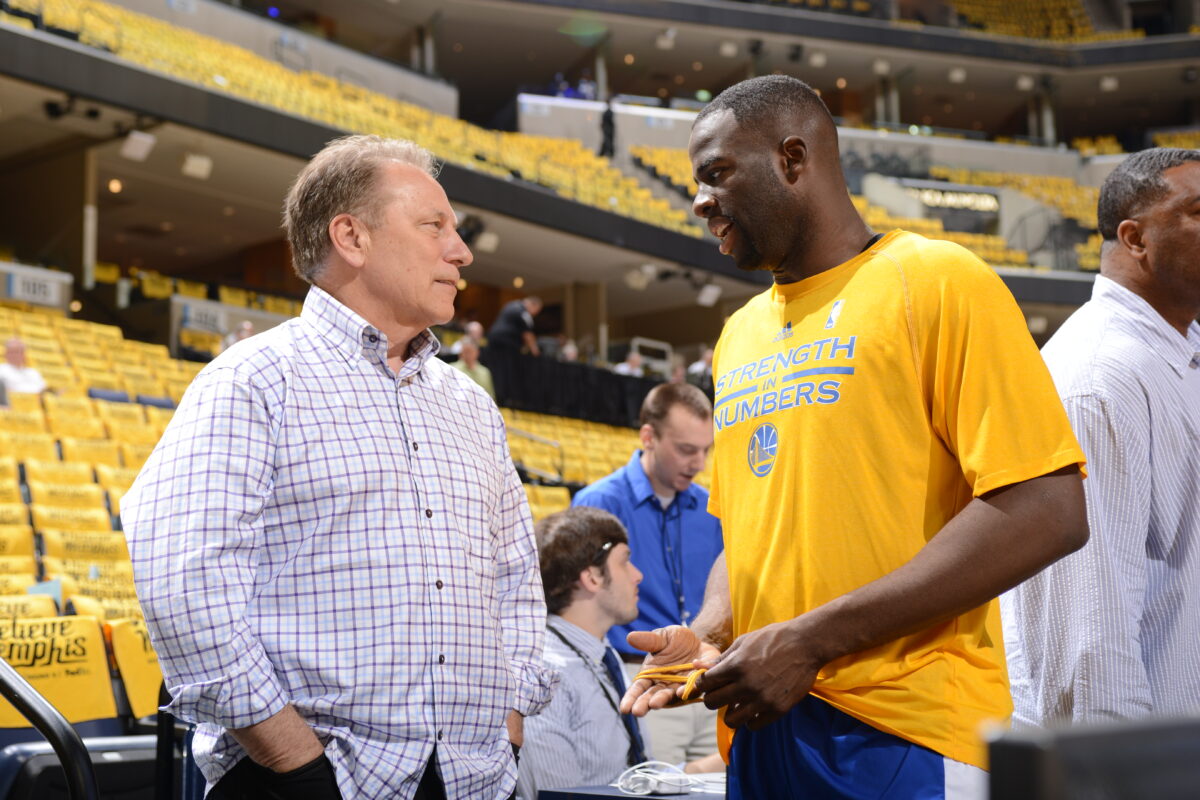 Michigan State basketball head coach Tom Izzo has always been known to support his Spartans as they continue their careers, and regularly flies to games to watch his former players. Izzo is doing exactly that tonight as he flew to San Francisco to watch Draymond Green and his Golden State Warriors in game two of the 2022 NBA Finals.

Izzo and Draymond shared a nice moment before the game started, which you can watch below: 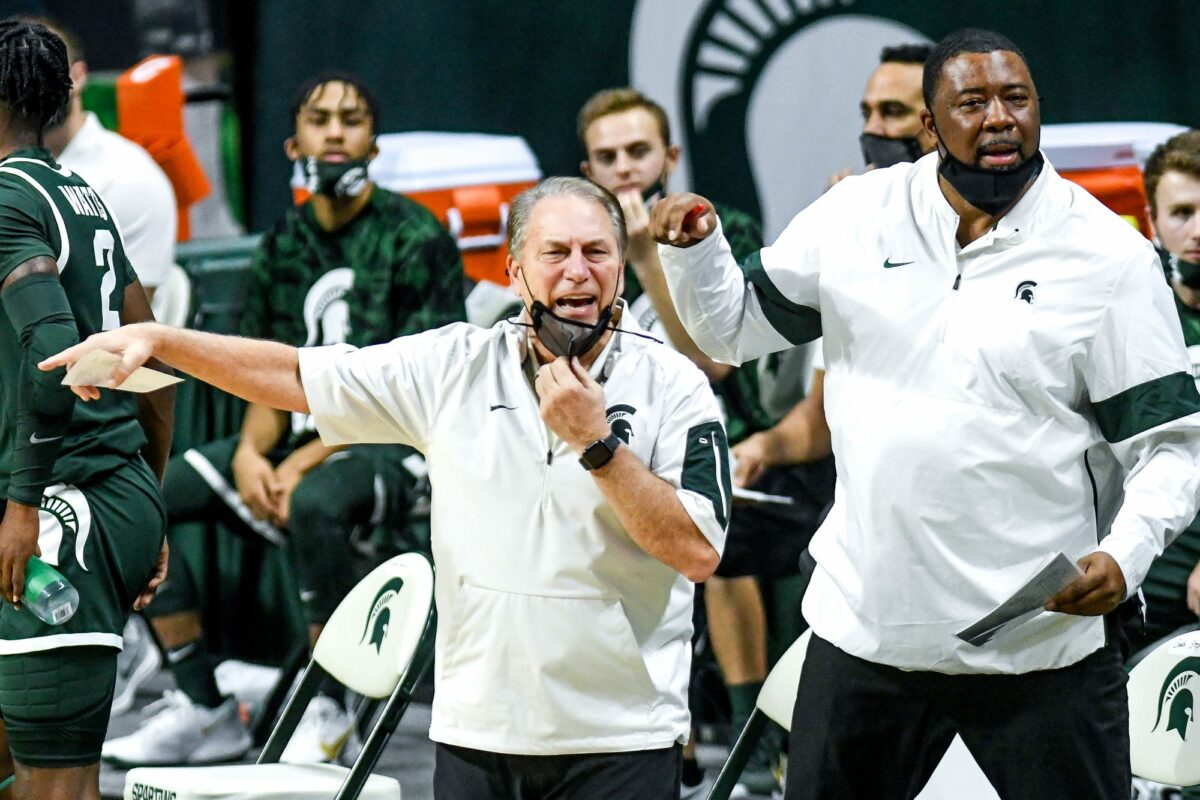 Long-time Michigan State basketball assistant coach Dwayne Stephens is finally getting a well-deserved opportunity to be a head coach this year with the Western Michigan Broncos. That leaves Tom Izzo with a decision to make on his replacement.

Izzo spoke to Audrey Dahlgren this week of WLNS about the decision and hints that he is looking at three guys who are all ‘apart of the family.’

Watch him speak on the topic below:

Who will replace Dwayne Stephens?

Tom Izzo said he's going to more than likely have someone hired by this weekend and the three guys he's looking at are part of the @MSU_Basketball family. pic.twitter.com/21i5OPkoDR 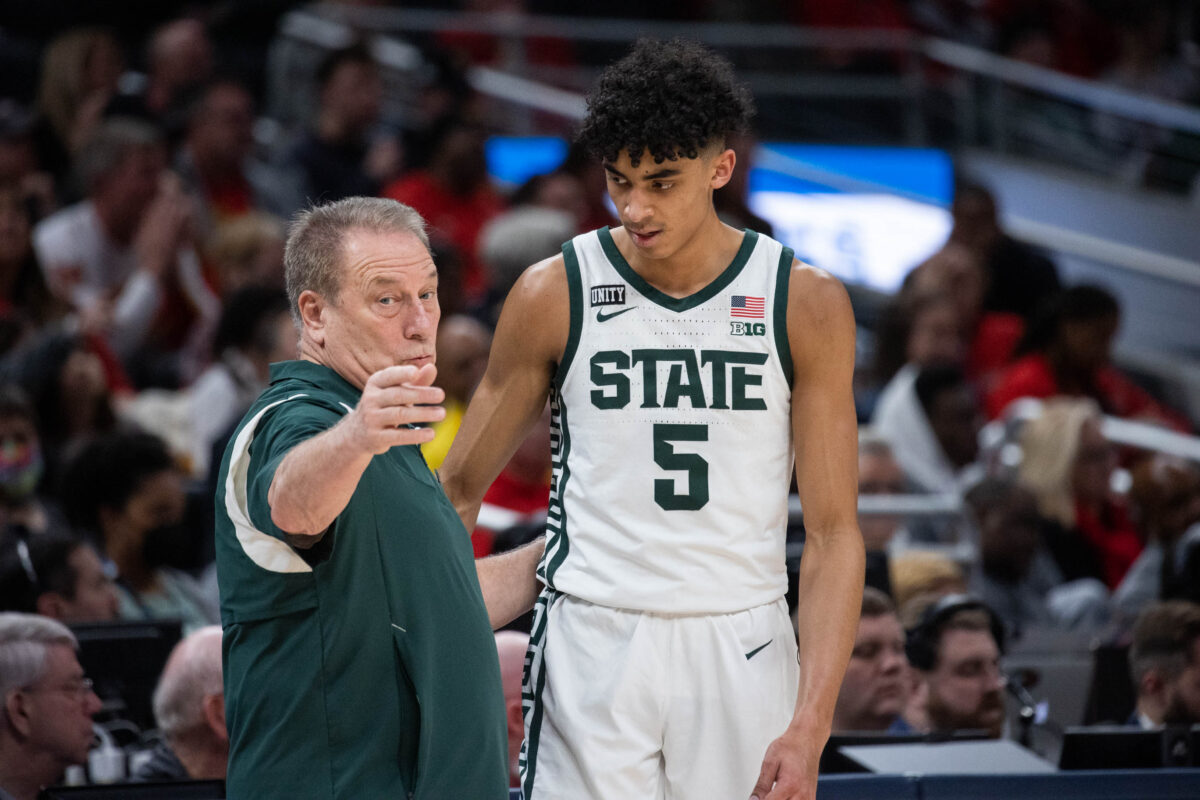 "I know this has been a lifelong dream for @Max12Christie and I am excited for him as he takes the next step and continues the process and journey to becoming an NBA player." 🏀 pic.twitter.com/gobDkC1SUT

Christie is projected to be a late first-round or an early second-round pick in the NBA Draft and will be participating in the pre-draft combine next week. 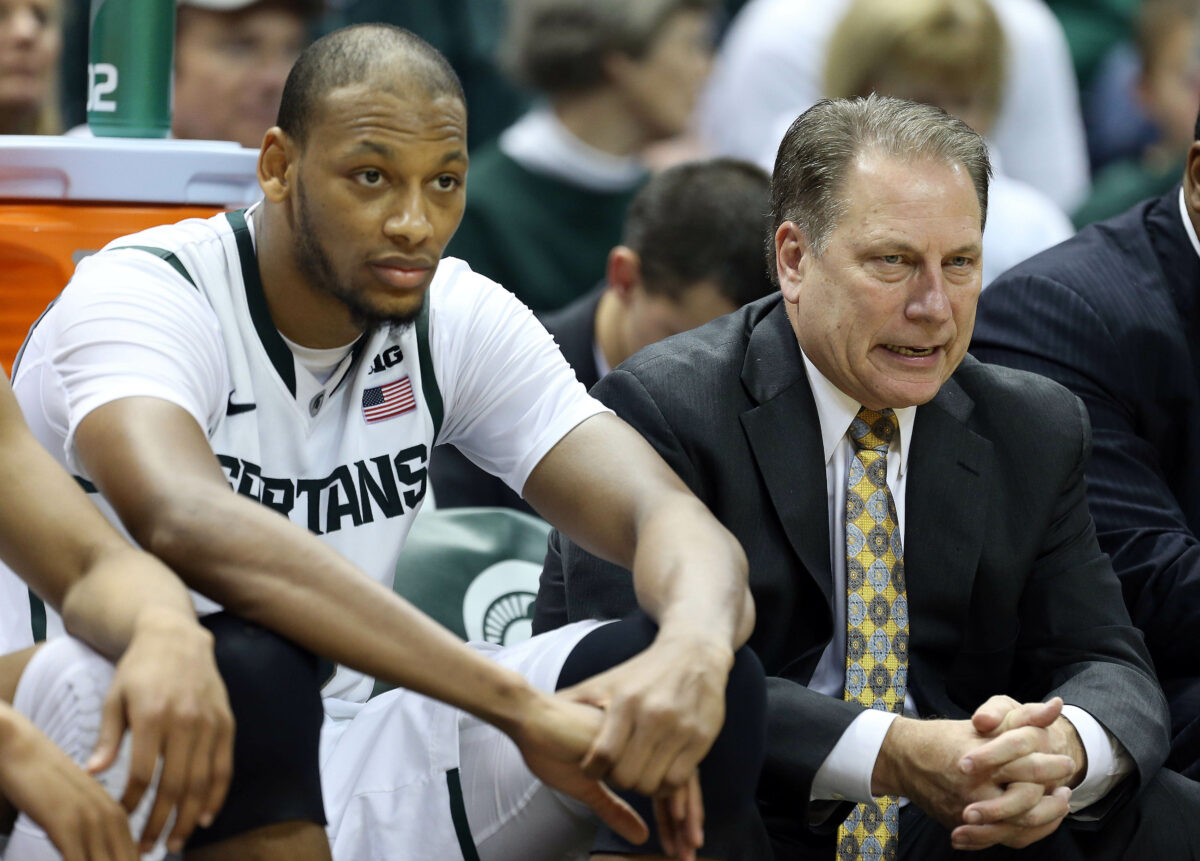 Michigan State basketball lost a beloved member this week in Adreian Payne, who will be remembered as much for his off the court bond with Lacey Holsworth as his stellar career with the Spartans.

On Monday, Tom Izzo released a statement on his former player who touched so many lives.

You can read it below:

A squad of Spartans made the trip down to Memphis to watch Draymond Green, Xavier Tillman and Jaren Jackson Jr. 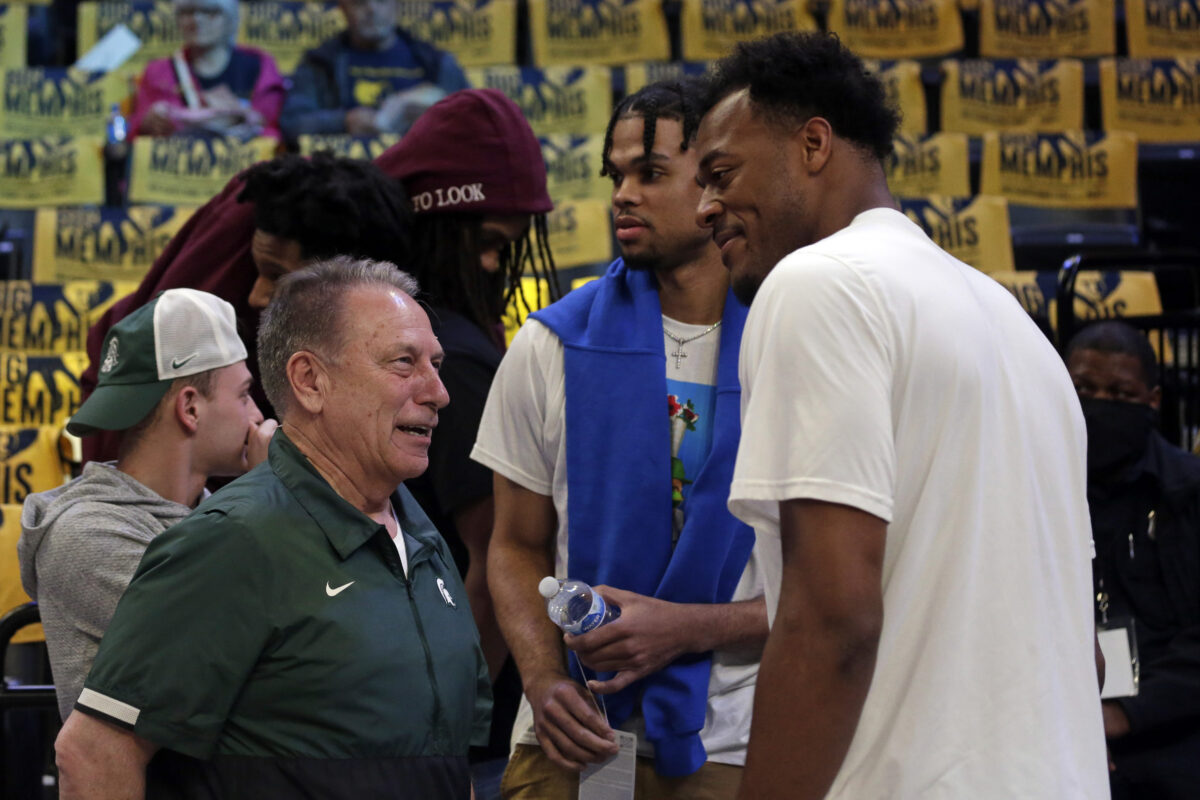 While much of the country is probably looking at the Memphis Grizzlies matchup with the Golden State Warriors as a showdown between Ja Morant and Steph Curry, it has a different meaning for Michigan State fans as three Spartans are starting in the series in Draymond Green, Xavier Tillman and Jaren Jackson Jr.

On Tuesday, Tom Izzo, Steven Izzo, Malik Hall and AJ Hoggard all made the trip down to Memphis to watch the Spartans face-off in the Western Conference semifinals.

Take a look at them taking photos with Draymond, JJJ, and XT at the arena pregame below:

The Spartan Dawgs face off again in Memphis tonight!

Tune in at 9:30 PM ET on TNT 🔥 pic.twitter.com/JzWwMRpIqE