Look: Top photos from the Cleveland Browns win over the Pittsburgh Steelers in Week 3 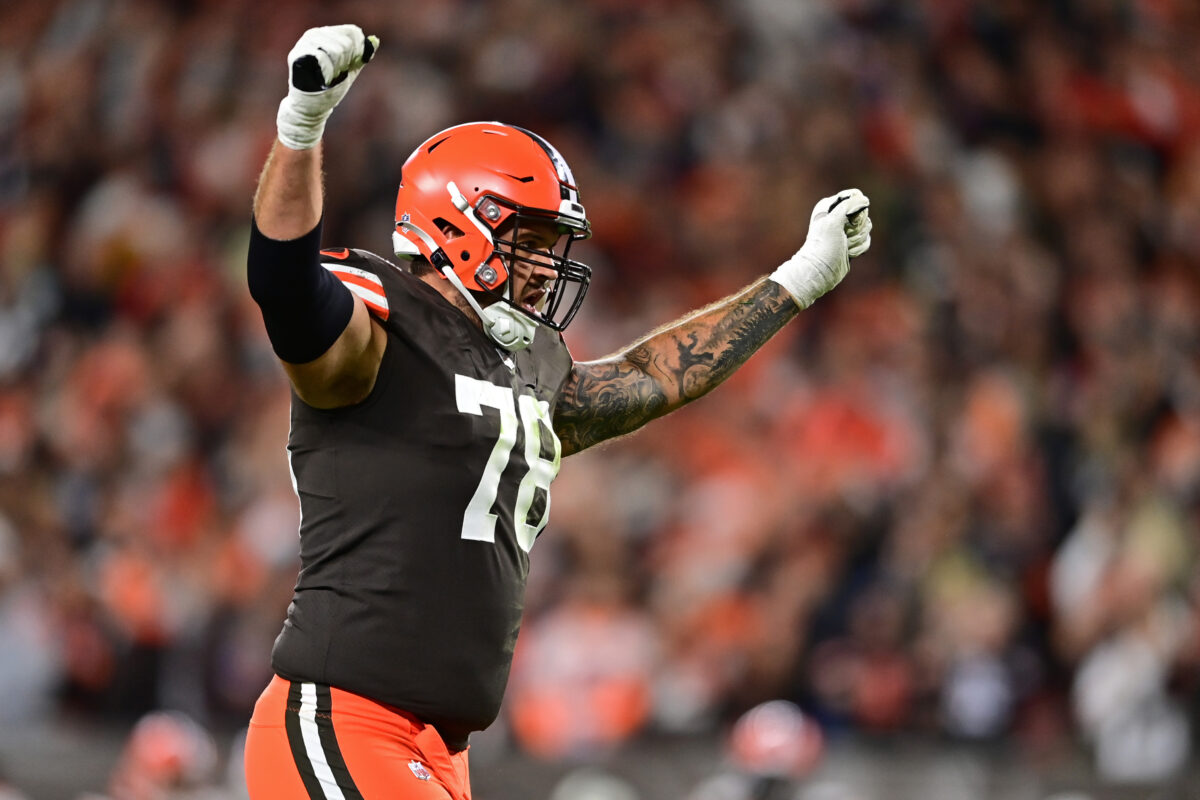 Cleveland rose up on Thursday night. A strong crowd in FirstEnergy Stadium helped fuel an efficient Browns team get back to the winning ways in a 29-17 win over the Pittsburgh Steelers on Thursday Night Football.

Big games from QB Jacoby Brissett, RB Nick Chubb and CB Denzel Ward, among several others, helped Cleveland improve to 2-1 and surge to the top of the AFC North standings.

Here are some of the top photos captured from the Browns big win over the Steelers in Week 3. 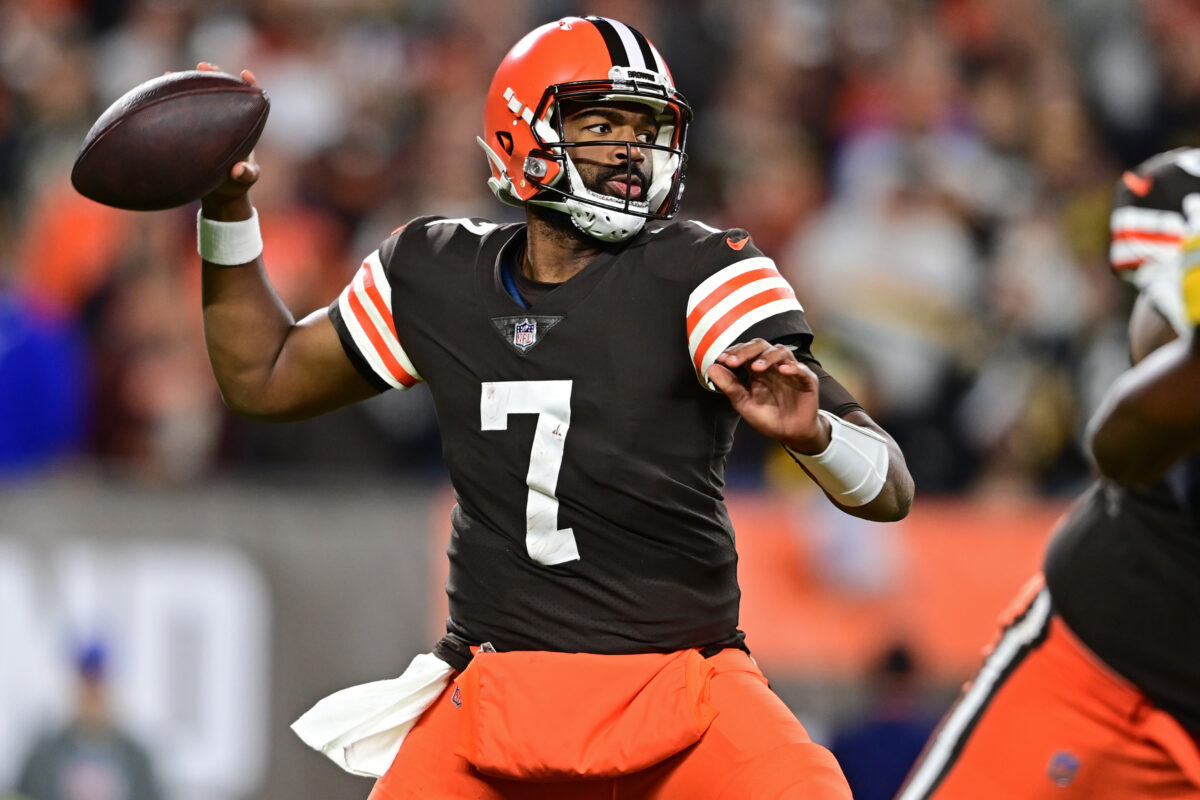 The Cleveland Browns captured an important victory on Thursday night, beating back the rival Pittsburgh Steelers 29-17 in a nationally televised game. Cleveland’s win came in no small part due to a great game from quarterback Jacoby Brissett.

Brissett was in complete command of the Browns offense all night. He delivered crisp, accurate passes to the best options. No. 7 completed 21 of his 31 pass attempts for 220 yards and two TDs. It was Brissett at his finest.

His teammates appreciated how well Brissett played in the primetime triumph.

Right tackle Jack Conklin, who played well in his own right, offered this on Brissett,

That sentiment was shared by wide receiver Amari Cooper, who was on the receiving end of seven of Brissett’s completions, hitting 101 yards and a touchdown.

“He is doing a great job leading us,” running back Kareem Hunt said. “He is hungry, too. He is a heck of a football player going out there and showing what we can do.”

Browns vs. Steelers: How to watch, listen, stream the Week 3 matchup 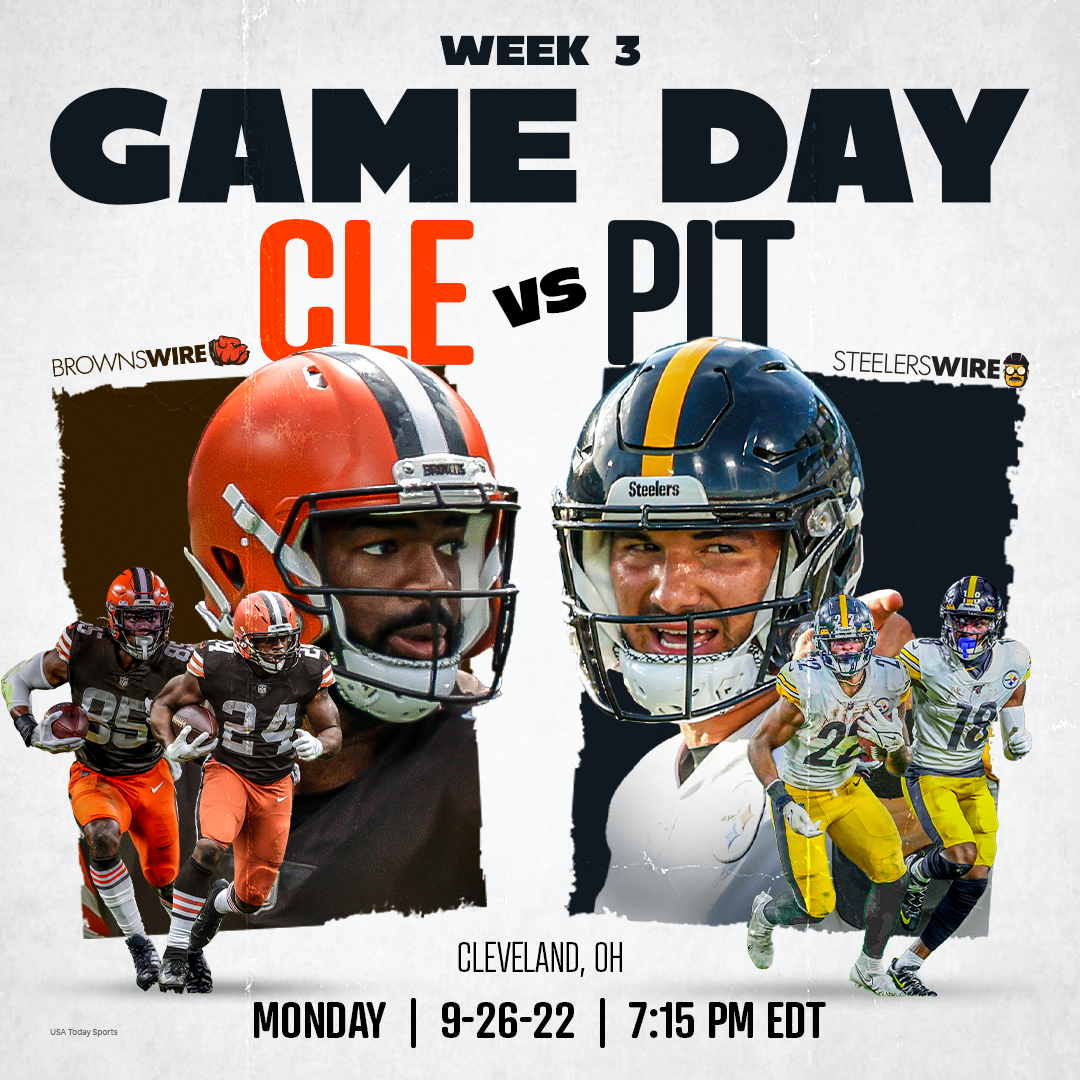 The unfriendly rivalry between the Cleveland Browns and Pittsburgh Steelers gets a national audience in Week 3. The Browns welcome the visiting Steelers to FirstEnergy Stadium for a critical early-season AFC North matchup on Thursday night.

The Browns are favored by 3.5 points.

The game is available for broadcast in local markets for Cleveland and Pittsburgh only. If you get WEWS-5 in Cleveland or WPXI 11 in Pittsburgh over the air or from your cable or satellite provider, the game will air on those stations.

Browns fans outside the local markets will need to watch the game on Amazon’s Prime Video premium streaming service. Al Michaels will have the play-by-play with Kirk Herbstreit providing color commentary for Amazon. 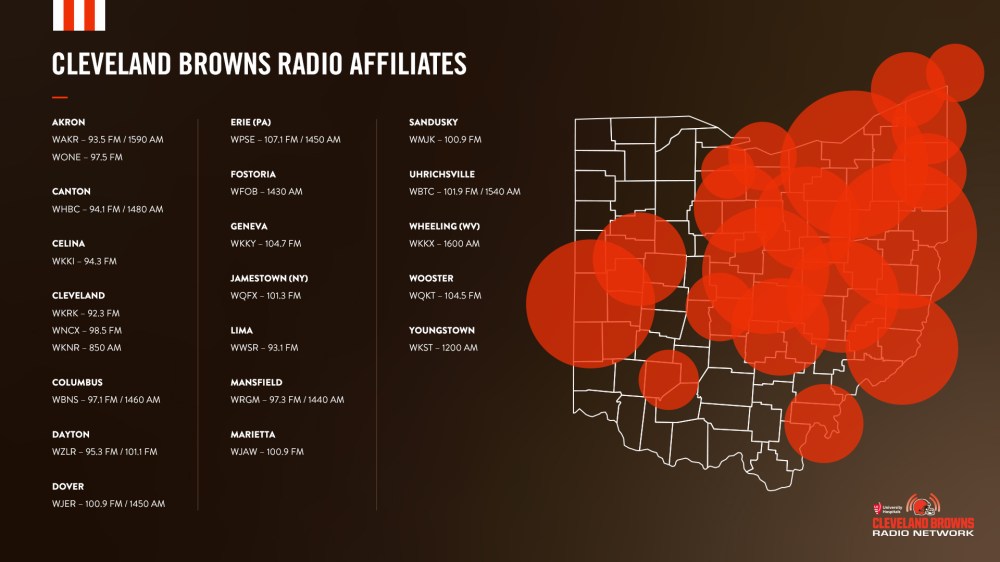 The game is available via the NFL+ app on a connected tablet or mobile phone. Note that it will not be available in the local Cleveland or Pittsburgh markets and requires a fee.

Chester Rogers was a top-10 NFL punt and kick returner in 2021, but the Browns aren’t expected to elevate him from the practice squad Sunday 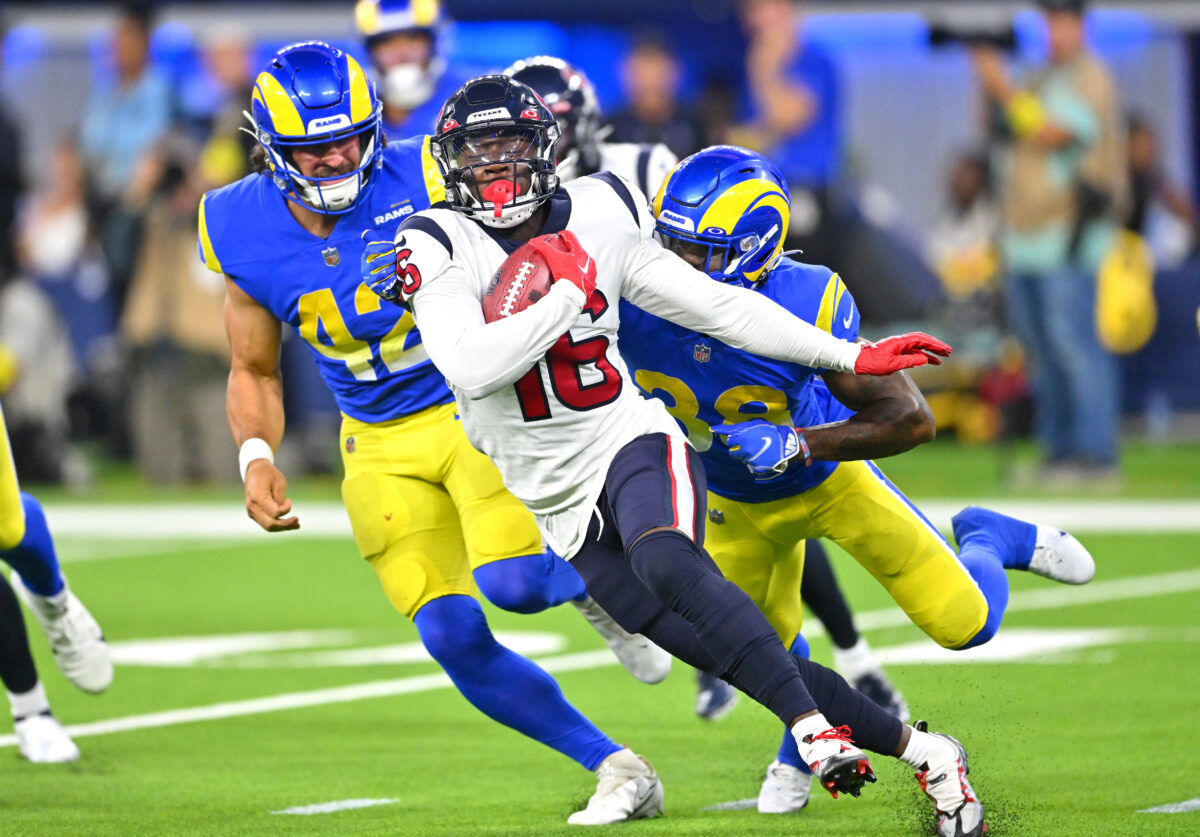 It was an easy connection and speculation to make. When the Browns signed wide receiver Chester Rogers to the practice squad this week, it was pretty clear the move was related to special teams and not the Cleveland offense. Rogers finished in the top 10 in the NFL in 2021 in both punt and kick returns while with the Tennessee Titans.

But if that is the plan for Rogers in Cleveland, it’s not an immediate one. Per Brad Stainbrook, the Browns are not expected to activate Rogers for this Sunday’s home opener against the New York Jets.

Demetric Felton fumbled away any job security at the spot with a terrible Week 1 in Carolina. Felton had a fumble and also left some yards on the field by going down on first contact. He had 28 yards on five punt return attempts. Jerome Ford remains the team’s kick returner, something special teams coordinator Mike Priefer reiterated this week.

Source: While the #Browns added Chester Rogers to the practice squad with the plan to have him return punts/kicks, I’m told he will not be added to the 53 man roster vs Jets Sunday. 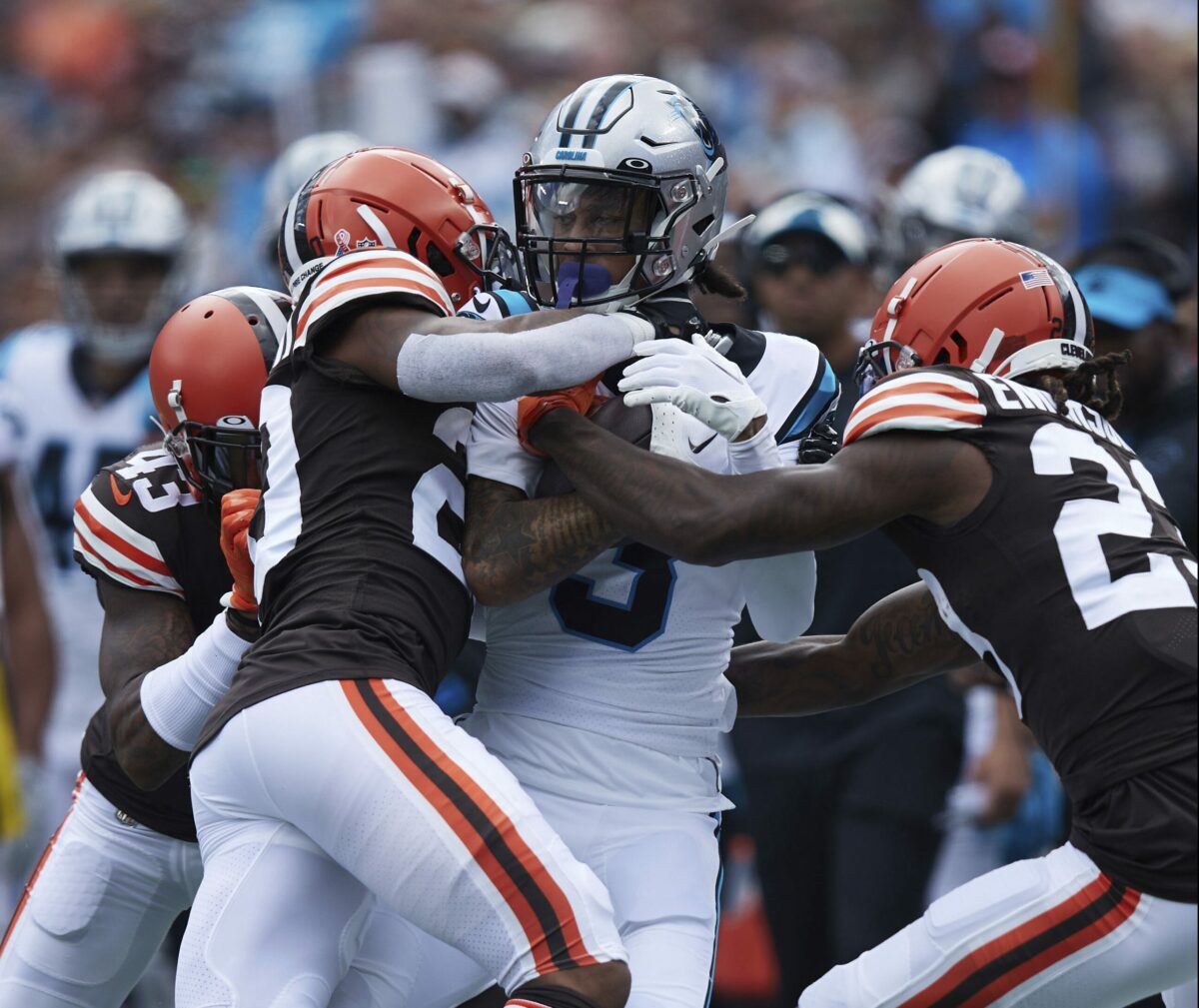 The Cleveland Browns continue to churn the bottom of their roster after a Week one victory over the Carolina Panthers. With CB Greedy Williams placed on injured reserve, the Browns front office looked to add some additional depth at cornerback signing first-year cornerback Thomas Graham Jr. (5-11, 197). Graham Jr was drafted in the 6th round in the 2021 draft and played in four games for the Bears last season, spending the other 14 weeks on their practice squad.

Herb Miller was waived to make room for Graham Jr. on the 53-man roster but did clear waivers and will sign on with Browns practice squad for the time being.

We have signed CB Herb Miller to the practice squad.

Miller spent all of training camp with team, made the initial 53-man roster, Sunday’s gameday roster, played all 22 special teams snaps and recovered a Demetric Felton muffed punt in the Browns’ Week 1 victory. The Browns add another contributing corner to the mix by signing Graham Jr. and retaining Miller to the practice squad.

In somewhat of a surprise, Browns rookie cornerback M.J. Emerson was the third cornerback on the field and played outside opposite Denzel Ward when the Browns kicked Greg Newsome inside to cover the slot. Emerson played 42 snaps on defense finishing with an overall PFF score of 70.6 and a coverage grade of 70.3. Meanwhile, training camp darling A.J. Green did not play one defensive snap. 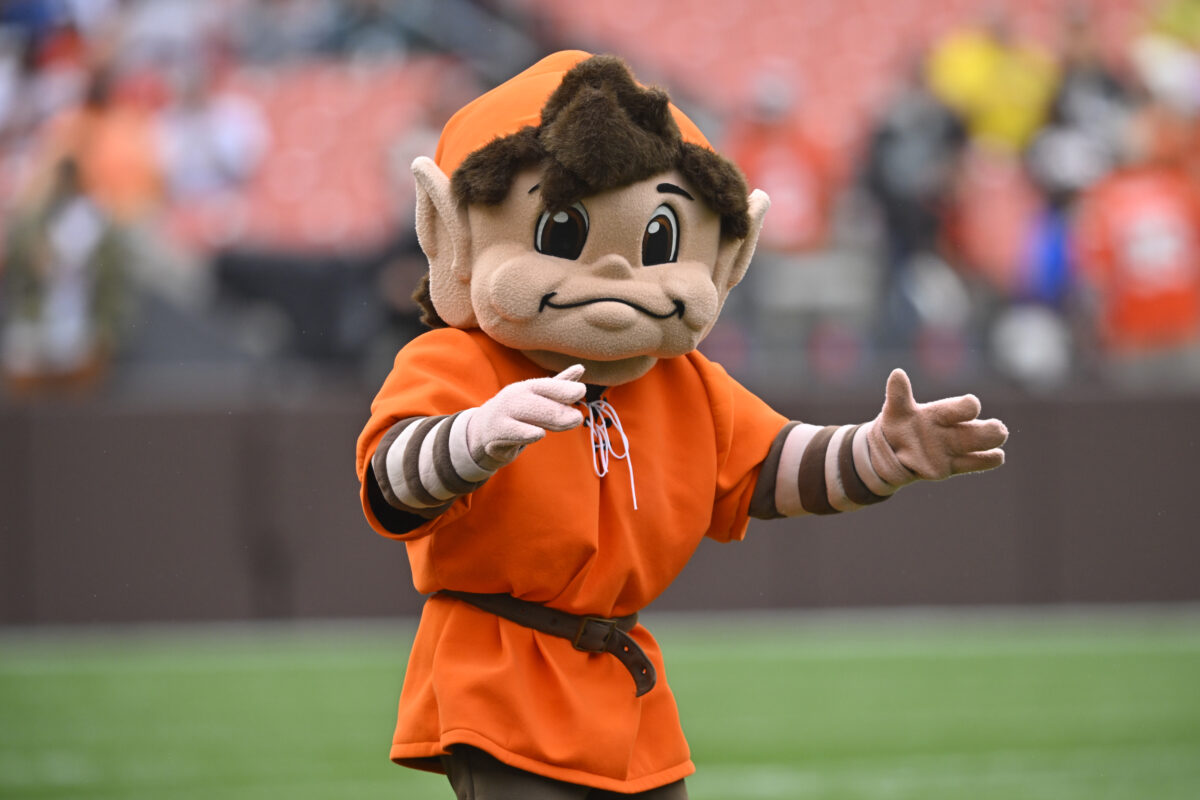 The Cleveland Cavaliers recently pulled off a blockbuster trade to acquire All-Star guard Donovan Mitchell from the Utah Jazz. Mitchell hasn’t suited up for the Cavs yet, but the newest Cleveland standout is already ingratiating himself with the local fans.

Mitchell posed for a picture with a fan, and it’s circulating on Twitter. Abby Mueller got a quick pic with Mitchell, who was rocking a sweet white Cavs hoodie. But it’s his choice of headgear that grabbed the attention.

Mitchell was wearing a white Browns hat featuring Brownie the Elf, the team’s mascot. He knows how to please the fans with the iconic Brownie, who now graces the midfield of FirstEnergy Stadium.

hey let’s go win one for The Land @spidadmitchell pic.twitter.com/MyzK746Sdx

Browns confirm the addition of Graham off the Bears practice squad as well as signing a potential returner to their own practice squad: 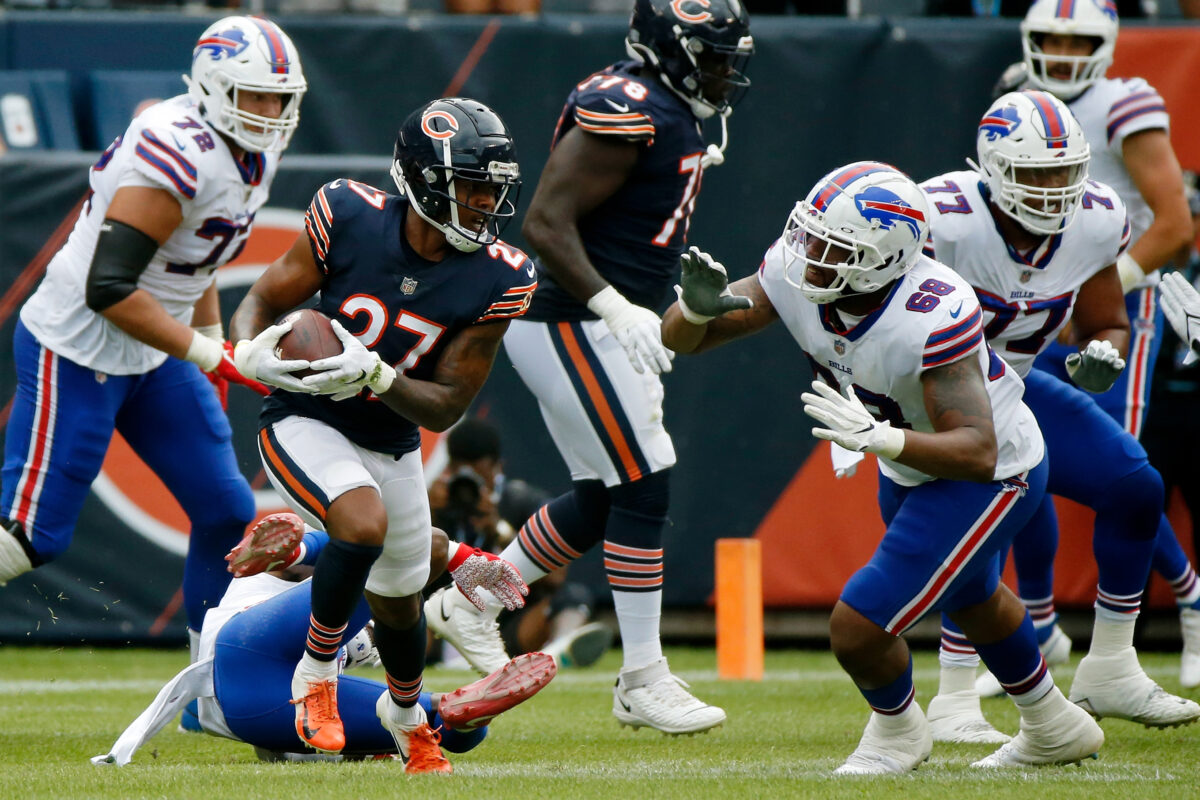 The Cleveland Browns may be one of the most active teams in the NFL. Rarely a week goes by without GM Andrew Berry making a move.

Monday, Berry waived CB Herb Miller a day after his possession-saving recovery of Demetric Felton’s fumble. In that report, we noted that the team had reportedly already decided who they would be adding to the roster but had not become official.

Tuesday that move became official with Cleveland signing CB Thomas Graham Jr. off of the Chicago Bears practice squad. Graham was a sixth-round pick in 2021 and played in four games for the Bears last year.

The Browns also signed WR Chester Rogers to their practice squad. Rogers has compiled 1,522 yards receiving in four seasons between Indianapolis and Tennesee. He has also returned punts throughout his career.

Once up to speed, it is possible that Rogers will take over for Felton in the return game while Graham will have important responsibilities in special teams as well.

On this date in 1993 the Cleveland Browns improved to 2-0. It was the last time the team opened a season with two wins. 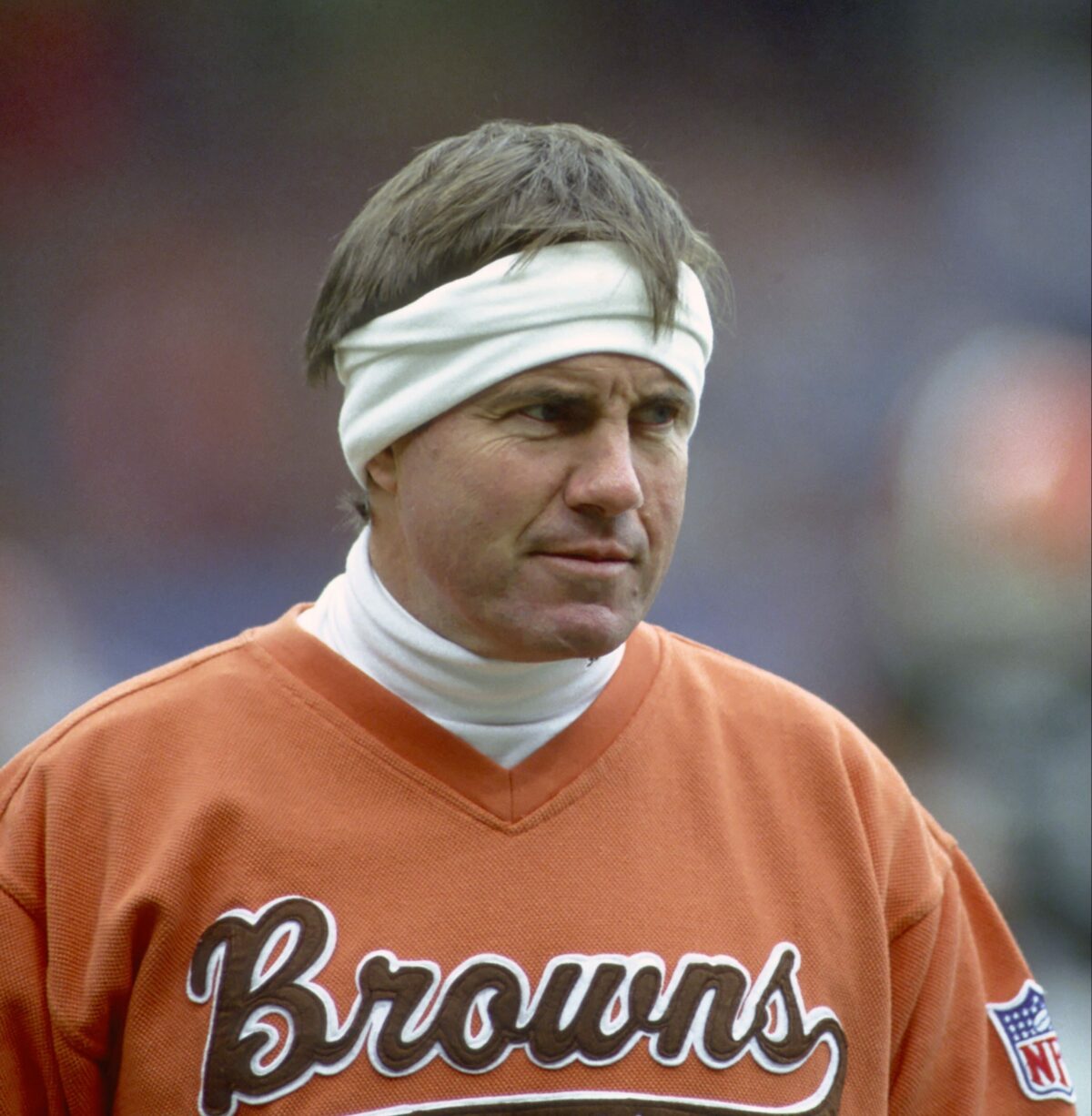 It’s been 29 long years since that date so that memory might be a bit fuzzy. For Browns fans, it can be difficult to remember the last time the team was 2-0 in a season. But it did happen on this date 29 years ago today.

For a refresher, the Browns were 1-0 after thumping the Bengals in Week 1 of that season. Bill Belichick’s Cleveland team hosted the San Francisco 49ers for Monday Night Football on the fateful date. Bernie Kosar hit Michael Jackson for a 30-yard TD pass before the half to give the Browns a 20-13 lead.

The only scoring in the second half came on a Matt Stover field goal, giving the Browns a 23-13 win and a shiny, unblemished 2-0 record. Cleveland’s defense picked off Steve Young three times and Jerry Ball notched a strip-sack of the future Hall of Famer which Michael Dean Perry recovered.

Those 49ers would advance to the NFC Championship that year. Belichick’s Browns would win again the following week to go to 3-0 and advance to 5-2 at the bye week. An injury to Kosar derailed the season and the Browns finished a disappointing 7-9.

Cleveland looks to make it 2-0 when the Browns host the 0-1 New York Jets at FirstEnergy Stadium on Sunday. To put in perspective how long it’s been since they were 2-0, that game in 1993 happened four days shy of my 21st birthday. I turn 50 on Saturday.

Hardly “one of us” but Haslam’s reaction was caught on video and it looked a whole lot like a fan’s reaction: 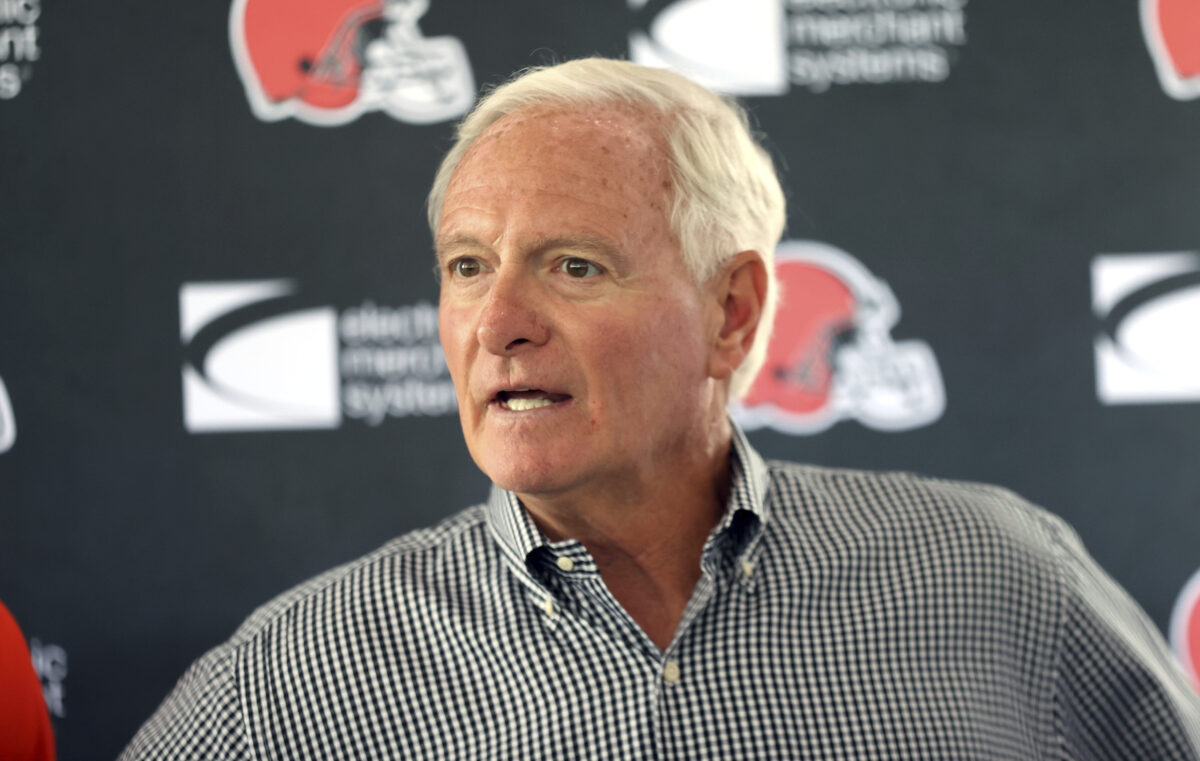 There is an old, possibly outdated, saying that “there is no cheering in the press box.” The idea is that media covering the games should have no emotional attachment to what is going on during the game.

Having covered both NFL and NBA games live as a member of the press, I can tell you it can be quite difficult.

Sunday, with his team down to Baker Mayfield and the Carolina Panthers, owner Jimmy Haslam prowled the sideline. His reaction to Cade York’s game-winning kick, to send the Cleveland Browns to 1-0 for the first time in his ownership, was caught on video:

You can also see J.W. Johnson come into view halfway through pumping his fist. Johnson, along with Myles Garrett, trolled Mayfield’s “off the leash” t-shirt after the game.

While Haslam has had a problematic stint as the team’s owner, it is obvious how passionate he is about the team. Like most fans, Sunday’s win was full of stress and excitement for the owner as well.

Love him or hate him, it looks like Brownie the Elf is hanging out at the 50-yard line all season at FirstEnergy Stadium. Team video confirms: 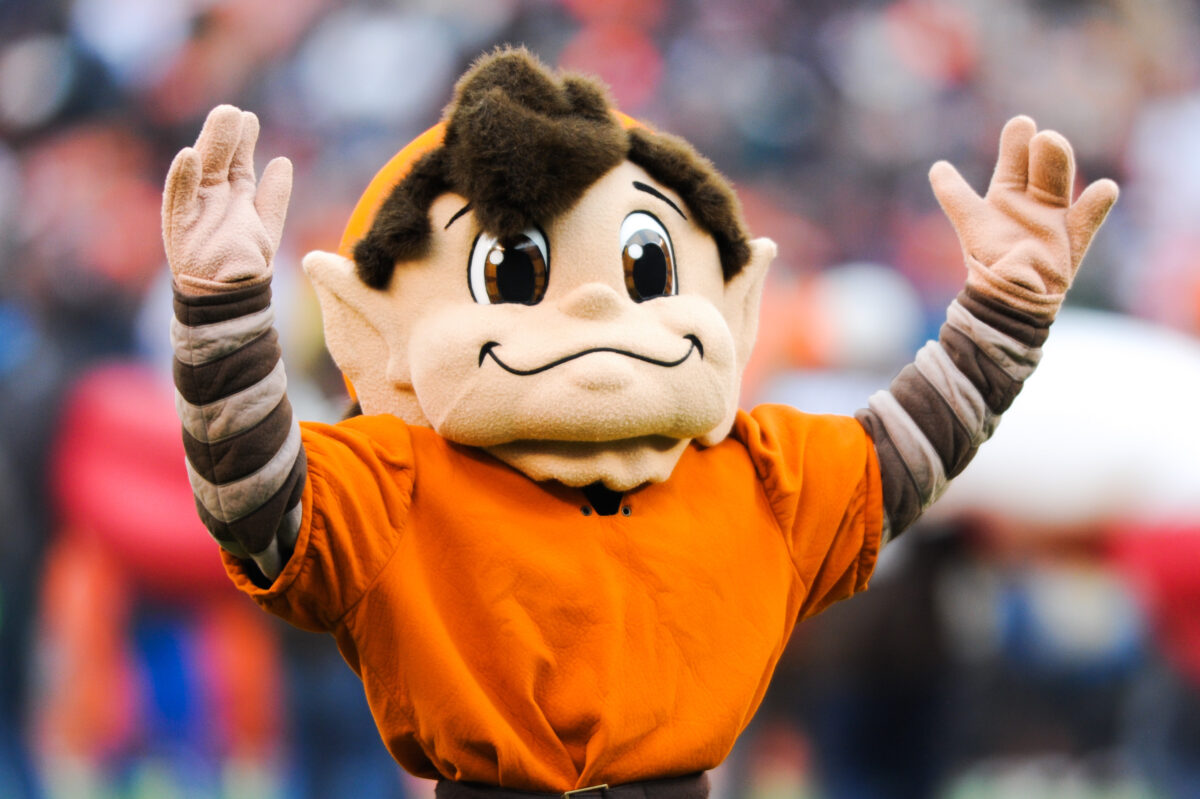 Based on the comments from the team’s announcement, and our post, it seemed fans were very passionate about the “Brownie the Elf” options. Some fans believed it was the only option while still others mocked the idea of a cartoon elf that has nothing to do with the team’s name being at midfield.

It looks like those passionate about the elf in a positive way have won out. First we saw this from high above the stadium:

Then, Brad Stainbrook of The OBR reported the same and included a picture from inside the stadium:

According to a source, the art was added to the field on Monday with that area being covered over the weekend during the rain.

The team has now confirmed the art at the 50-yard line with this video of it:

the people have spoken 🏟 pic.twitter.com/TYOBd59So8

What do you think of the team’s new design at the 50-yard line?