The Ohio State Buckeyes men’s tennis team upset the No. 1 USC Trojans in Columbus on Sunday. 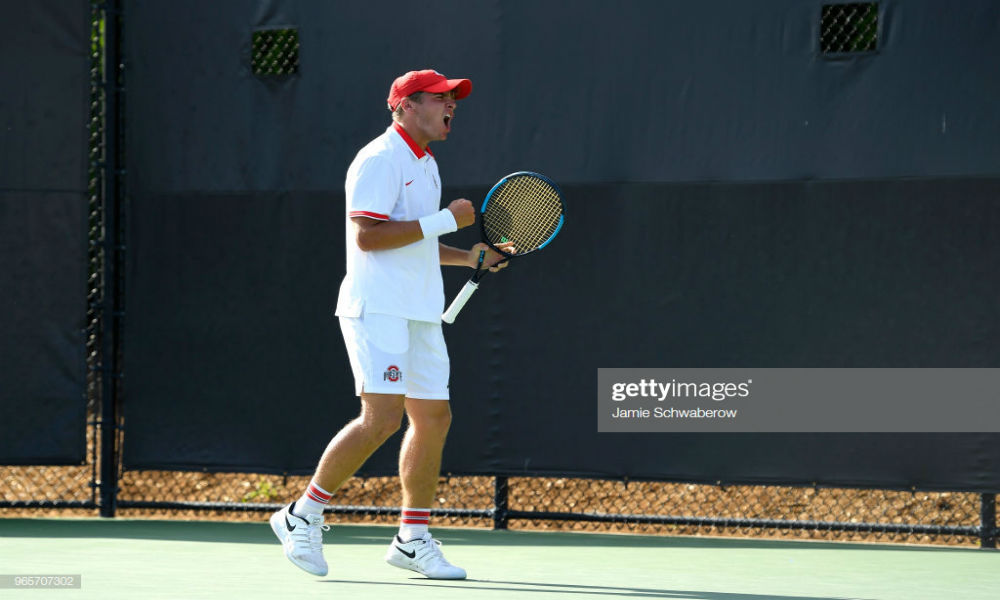 A week after taking out then-No. 1 Texas, the Ohio State Men’s Tennis team took down another No. 1 team in the nation–the USC Trojans.

The Trojans stayed at No. 1 for a good reason–they are a rare team that has six nationally-ranked players. That is a very tough matchup for any team to beat. Even Ohio State last season–when the Buckeyes were a prohibitive No. 1 for most of the season–didn’t have six ranked players. The lowest-ranked player for USC is No. 69 Ryder Jackson, while No. 1 Daniel Cukierman leads the squad.

Ohio State wasn’t daunted by this matchup, and the Buckeyes had a great home crowd behind them. The Buckeyes took the doubles point with a 6-4 win on Court 3 and a tiebreak win on Court 2, while Ohio State’s No. 1 pair of John McNally and Robert McNally didn’t finish their set, as the Buckeyes claimed the point while that court was still in a tiebreaker.

Still, the Buckeyes needed to win three of the six singles matches, all against ranked players. McNally–whose sister Caty is making waves on the professional tour, especially with partner CoCo Gauff in doubles–took down No. 24 Brandon Holt in straight sets. The huge win was on Court 2, though, where rising star freshman Cannon Kingsley took down No. 1 Cukierman in two easy sets. USC won their matches on Courts 3 and 4, and they forced third sets on the other two. However, Buckeye sophomore James Trotter ran away with his third set against No. 65 Stefan Dostanic, and the Buckeyes took home the victory.

The Buckeyes next face No. 7 Texas A&M on Tuesday evening, again in Columbus. After that, it will be the ITA National Indoors Championships–where Ohio State enters as defending champions.

It’s been a tough road back to the top for Ohio State, after a quarterfinal loss in the NCAA tournament and the graduation of J.J. Wolf. Still, the Buckeyes should be right at No. 1 when the rankings update again, and this time the Buckeyes will want to hold on to that even deeper into the NCAAs.