Three former Clemson student-athletes earned seven selections on the Southern Conference 100th Anniversary team, as announced today. Clemson was a member of the SoCon from 1921-1953. Banks McFadden (basketball, football and track) and Frank … 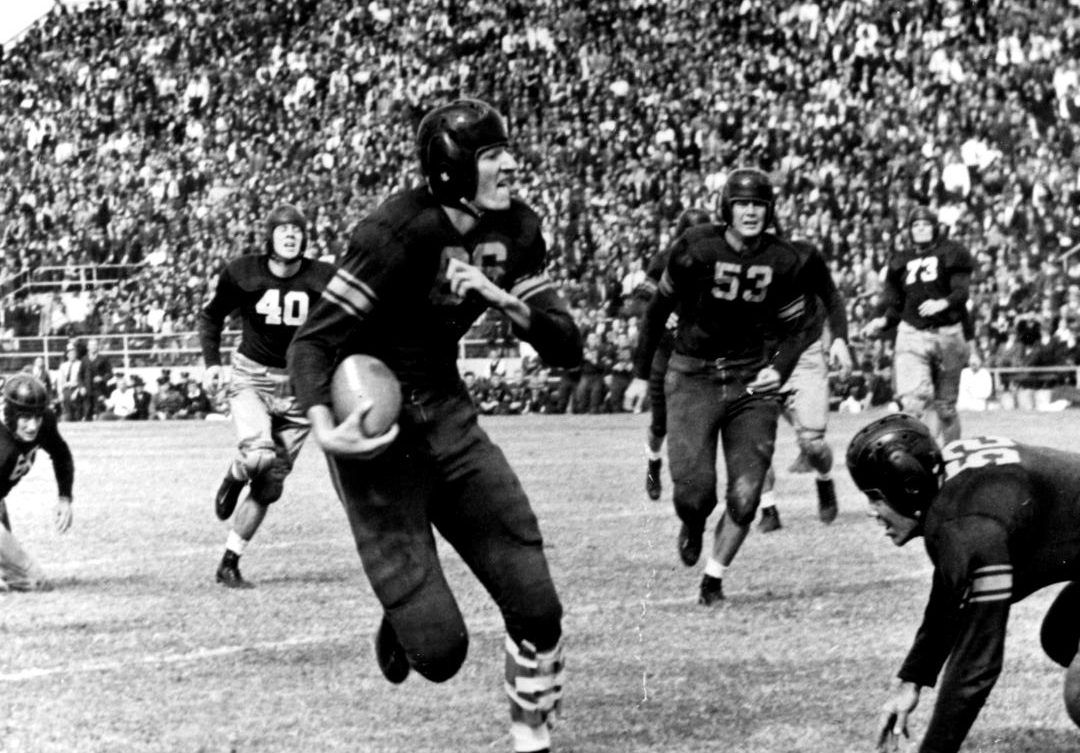 Three former Clemson student-athletes earned seven selections on the Southern Conference 100th Anniversary team, as announced today. Clemson was a member of the SoCon from 1921-1953.
Banks McFadden (basketball, football and track) and Frank Gillespie (baseball, basketball and football) each earned the distinction in three sports, while Joe Blalock earned the honor in football. All three are members of the Clemson Athletic Hall of Fame. Blalock and McFadden were inducted in the inaugural 1973 class, while Gillespie was inducted in 1977.

Clemson Variety & Frame is doing their part to help bring you some classic new barware and help one of the local businesses that helps make Clemson special.

Order your Nick’s barware and do your part to help.  #SaveNicks

Another big-time addition to the Texas Longhorns roster for 2022. 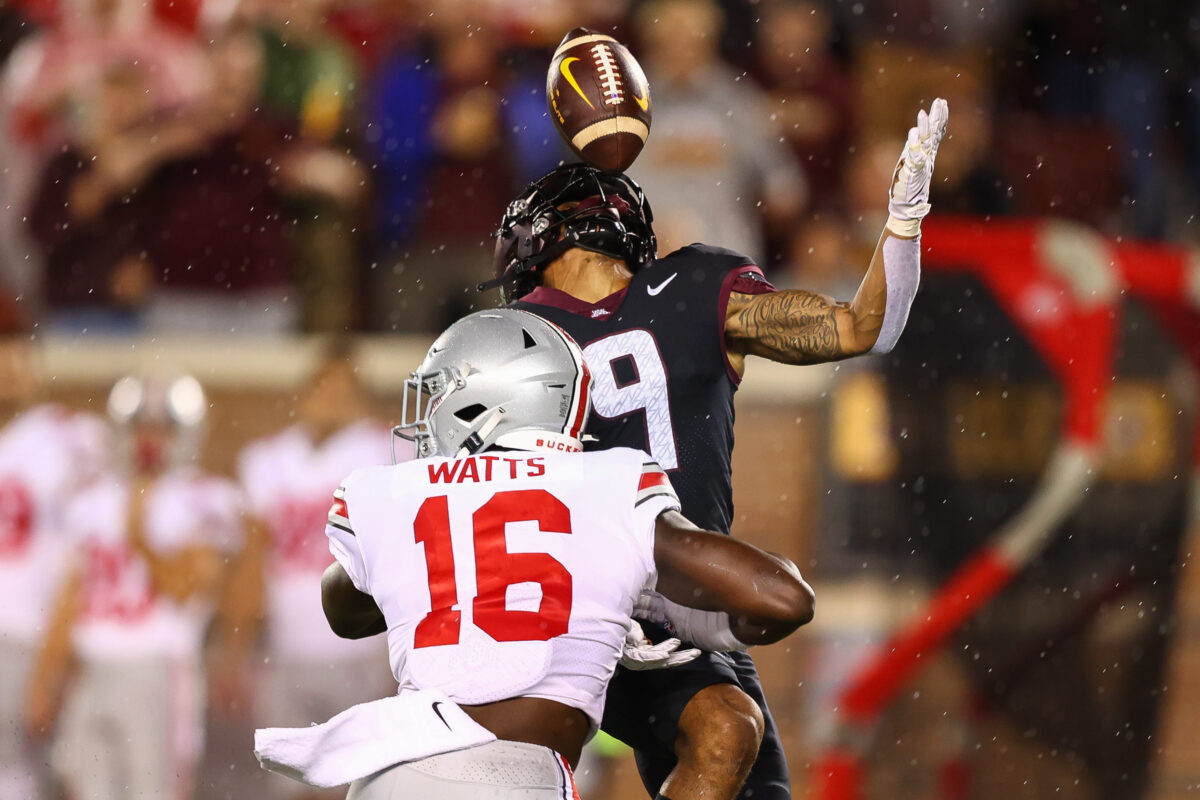 The Ohio State to Texas connection is still well and alive, as the Longhorns landed another Ohio State transfer in Ryan Watts.

He marks the second transfer player that has decided to return to their home state and play for Steve Sarkisian and the Longhorns, as generational quarterback prospect Quinn Ewers did the same.

The former four-star cornerback is a Little Elm, Texas, native and was once was viewed as a top-150 recruit in high school.

He took to Twitter on Wednesday to announce the decision, and he will surely be an instant contributor for the Longhorns who lost all of their starting defensive backs except for one.

During his last season at Ohio State, the redshirt freshman saw limited action recording six tackles and two interceptions. However, he offers great athleticism and size, measuring in at over 6-foot-2.

Even with all the experience Texas had in the defensive backfield, the group struggled mightily, so bringing in a guy like Watts who is not only young but has a big body and athleticism will likely only help. Texas’ defense gave up 10.5 yards per pass, and close to 230 passing yards per game last season, and while they do have some semi-experienced options waiting in the wings, they now have another player that can be a big-time playmaker on defense. 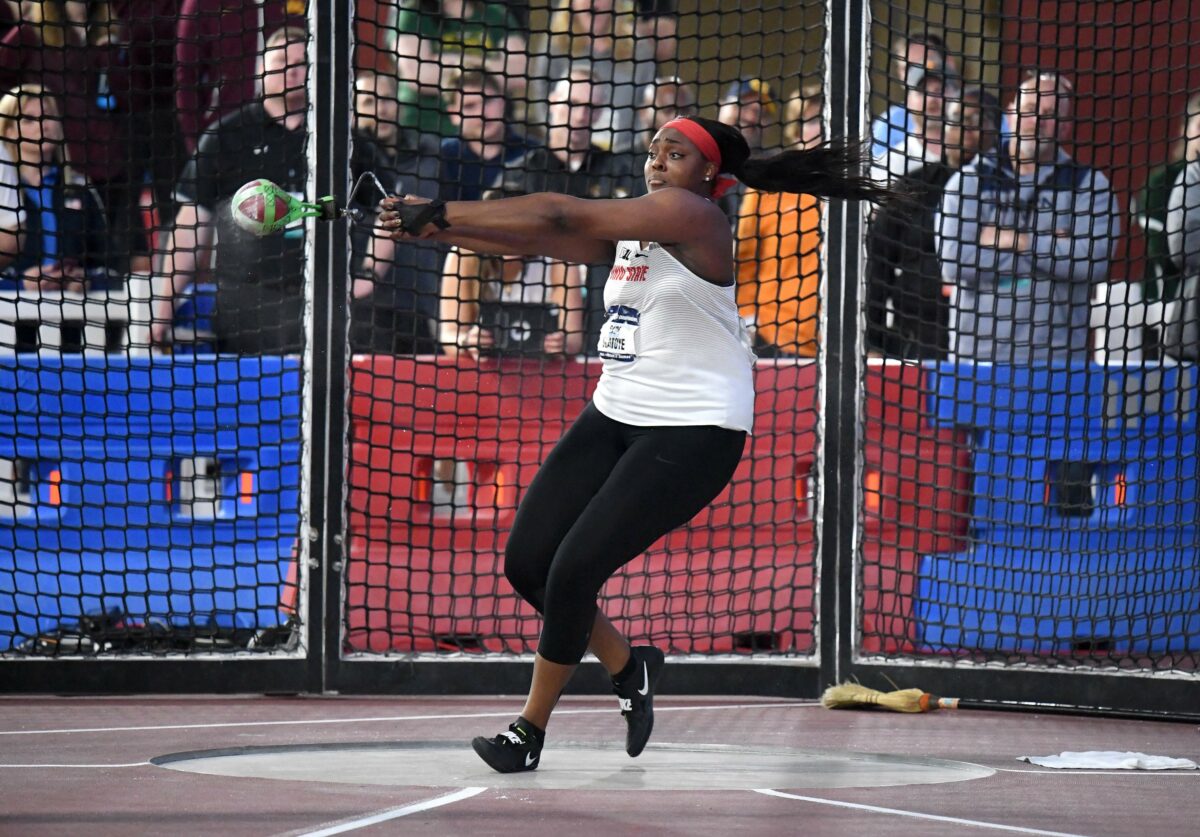 On the field, she was dominant in the shot put and weight throw for the track and field program. She tied the school record for most individual Big Ten championships in field events – six. Four of those came in the shot put with three of those coming indoors (2017, 2018, 2019), and one of the outdoor variety (2017). Olatoye took two Big Ten championships home in the weight throw (2017, 2019).

Congratulations to @Sade_olatoye on being named the @bigten honoree for the 2021 @NCAA Woman of the Year Award!!!

Congrats are definitely in order for Olatoye for not only a great career, but for this distinguished honor.

Hey, the Olympics are going on. What better time to sit down with former Buckeye Butch Reynolds to get his thoughts on the international competition, Ohio State football, the time he tried out for the Browns, and more. 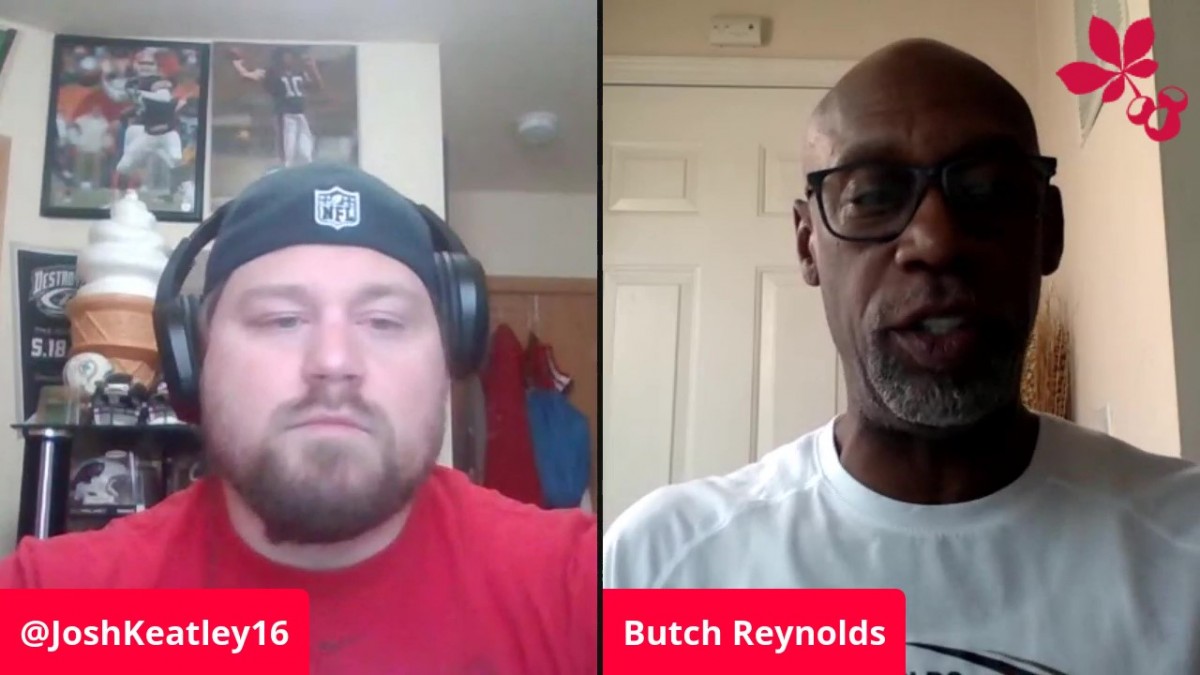 There are some guys that need no introduction. Former Ohio State track star Butch Reynolds is one of those. The list of accomplishments is astounding when it comes to international competition in track and field and beyond.

But that’s not all Reynolds is known for. Jim Tressel tapped him to be the Ohio State football speed coach in 2005. He coached and developed guys like Ted Ginn, Jr., A.J. Hawk, Troy Smith, Santonio Holmes, and more. He also is a speed coach still to this day who works with OSU linebacker commit Gabe Powers,

But that’s not all. Reynolds has a noble charity named “Care for Kids” that’s been making a difference since 1995. Oh, and did we mention he has a book in the works? Sounds like a page-turner to us.

Buckeyes Wire’s Josh Keatley sat down for a timely interview with Reynolds as the Olympics are in full swing out in Tokyo for a wide-ranging and engaging interview. So head on over to our YouTube channel by clicking on the below video and listen to Reynolds talk about the fastest guy he ever coached at Ohio State, what his fondest accomplishment is, the time he tried out for the Browns, and much, much more.

To learn more about Butch Reynolds, including his speed and agility coaching as well as his charitable work, do yourself a favor and visit ButchReynolds.com for more.

Raevyn Rogers looked to be down and out, but a massive kick down the backstretch shot her past 4 women and put her in third, winning bronze in the 800m final. 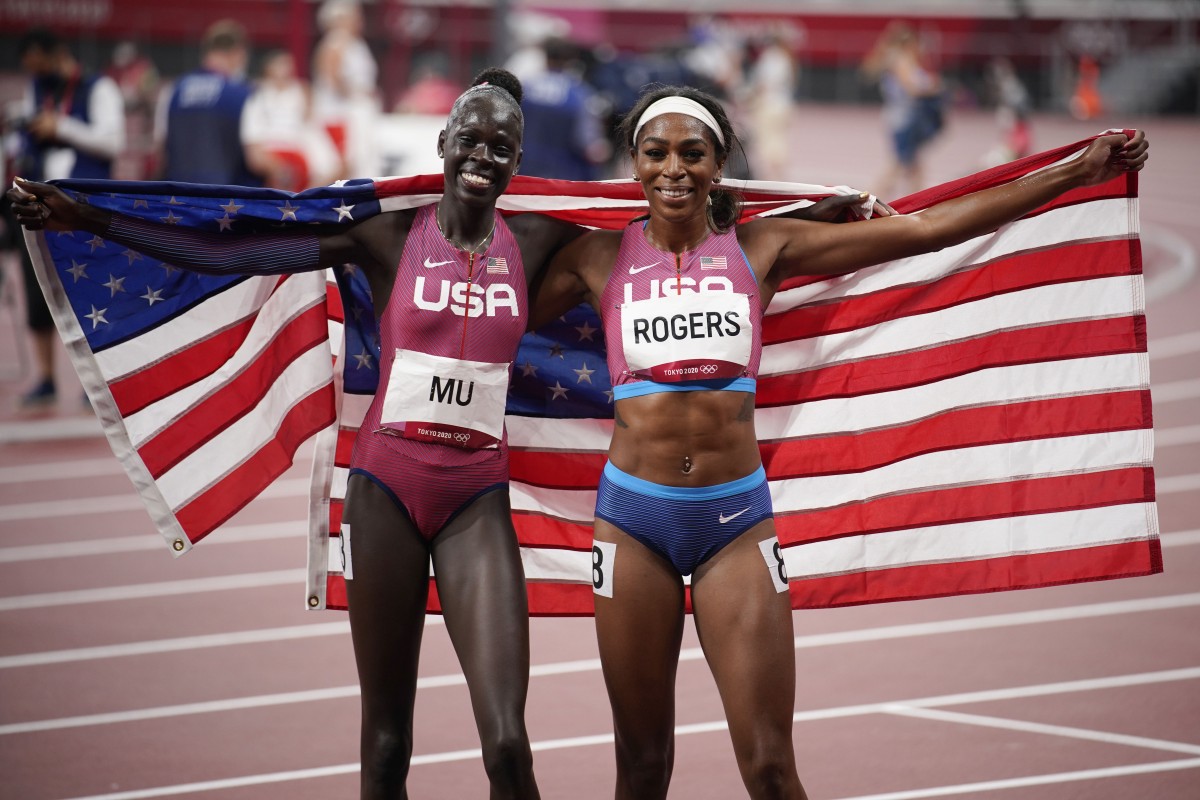 LOOK AT THAT CLOSING KICK FROM @TheROYALlife21 TO GET ON THE PODIUM!!! https://t.co/CBsHUwWk7R

Now that’s how you finish a race like there’s no tomorrow.

For about 90 percent of the race, Oregon Ducks legend Raevyn Rogers was near the back of the pack, seemingly letting her chance at a first Olympic medal in the 800m final get away from her. Up ahead, United States sensation, Athing Mu, was dominating and pulling away down the backstretch.

While the world was focused on the 19-year-old who was about to cruise to her first of hopefully many medals, Rogers was mounting a charge.

Down the final straightaway, Raevyn flew up the leaderboard, making her way past four other women to just barely edge out a third-place finish as she crossed the stripe. Mu won the gold, and Great Britain’s Keely Hodgkinson — another 19-year-old — won the silver.

It was stressful until the very end, and at many points, didn’t look like it was going to happen, but Rogers found a way to get the job done and land on the podium in her first Summer Olympics.

The legend lives on for one of Oregon’s all-time favorites.

There are a number of former Ducks competing at a high level in the Tokyo Games, with Raevyn Rogers advancing to the 800 final, and Jenna Prandini finishing 13th in the 200m. 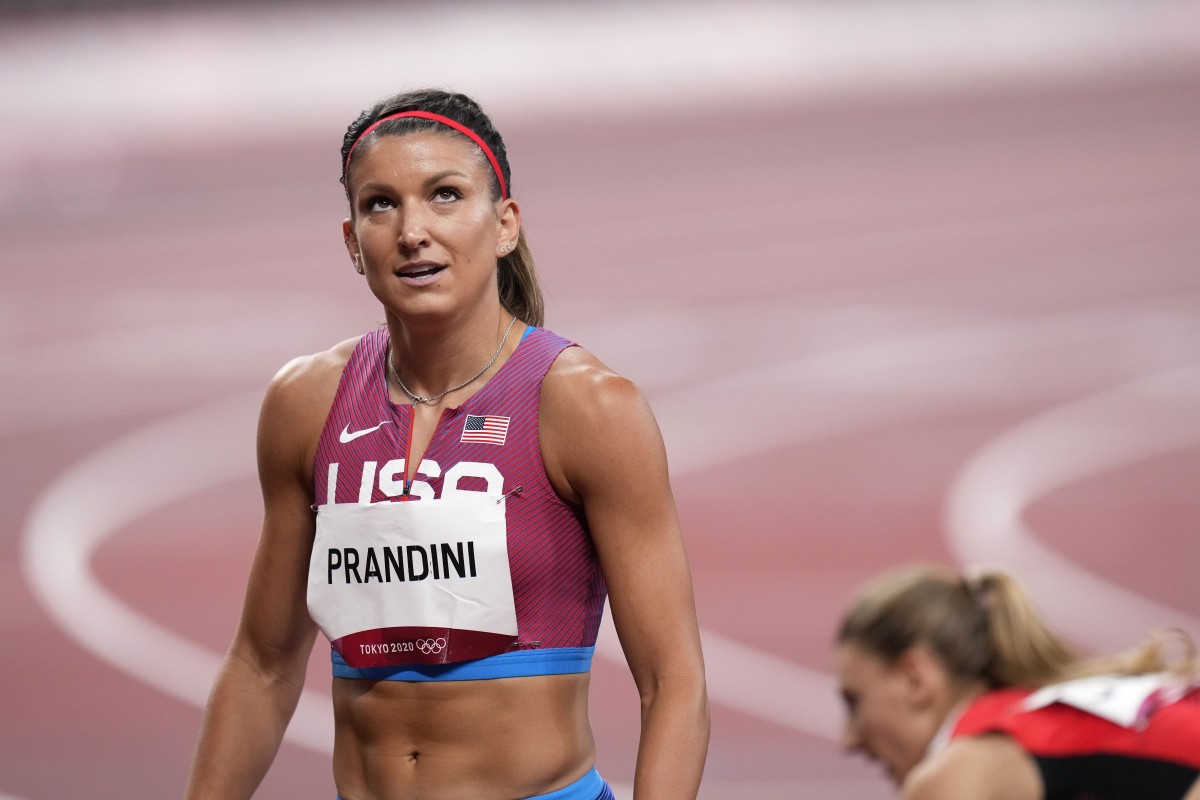 The Oregon Ducks have been well-represented at the Tokyo Olympics this past week, with well over a dozen athletes running in the ‘Athletics’ section of the games.

Competition on the track is well underway, and for fans of the Ducks, it has been highlighted by Oregon legend Raevyn Rogers, who advanced to the 800m final which will be run on Tuesday morning at 5:25 a.m. PT.

We will continue to update this list as the Olympic games go on, with some big stars continuing to take the track, including Devon Allen, Marcus Chambers, and English Gardner. Stay tuned as the Tokyo Games continue to roll on. 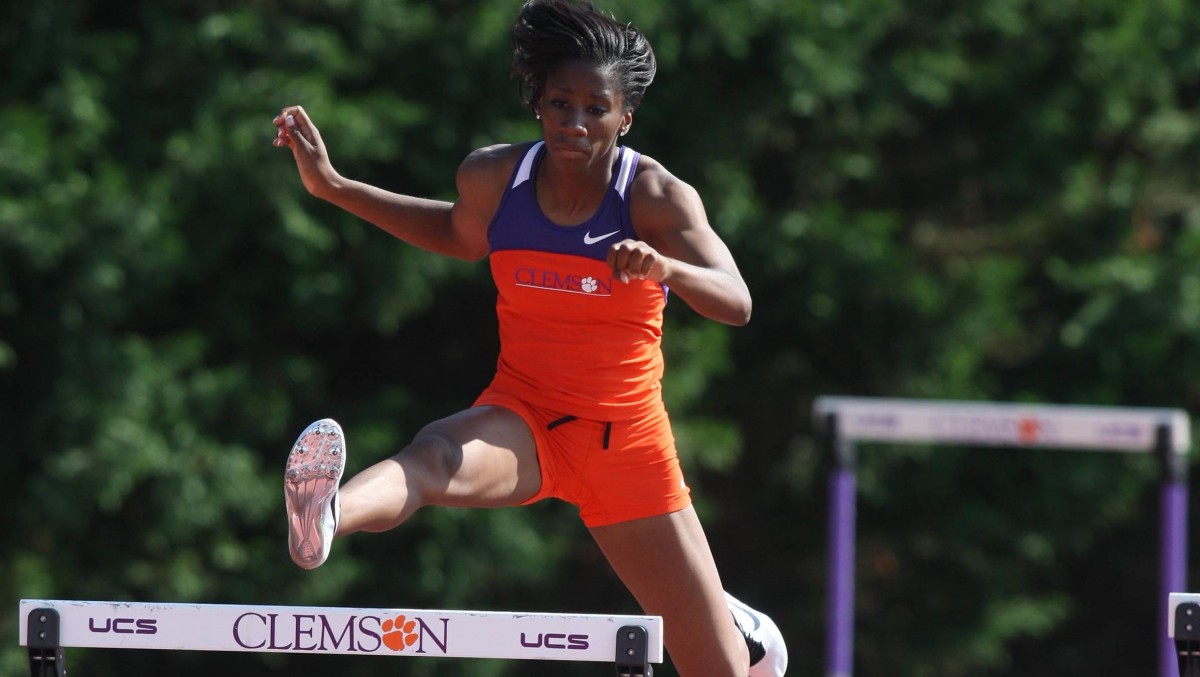 Harrison started her college career at Clemson in 2012 before she transferred to Kentucky. While with the Tigers she won an ACC championship in the 400-meter hurdles and was a member of the 4 X 400 relay team.

Clemson Variety & Frame is doing their part to help bring you some classic new barware and help one of the local businesses that helps make Clemson special.

Order your Nick’s barware and do your part to help.  #SaveNicks

Richardson could miss the Olympics after failing a drug test. 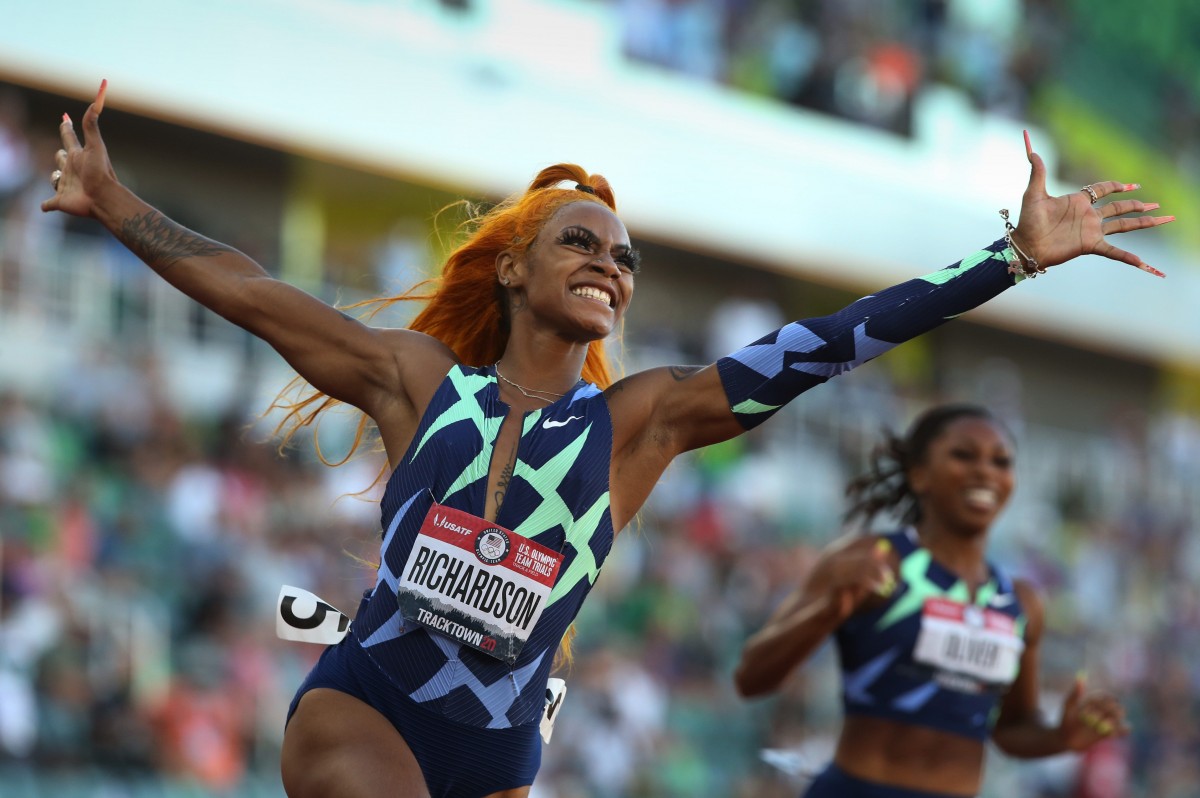 Just four weeks before the start of the Olympic Games in Tokyo, American sprinter and former LSU track star Sha’Carri Richardson tested positive for a prohibited substance, potentially causing her to miss the Olympics.

Richardson tested positive for marijuana resulting in a potential one to three-month suspension for the analytical finding.

The test was administered at the US Olympic Trials and marijuana was classified as a ‘Substance of Abuse’ by the World Anti-Doping Agency (WADA) on January 1, 2021. The use of this substance carries a maximum four-year ban.

Richardson has the ability to prove the drug was used outside of the competition and was not used for any performance enhancement. If Richardson can prove this, the ban can be reduced to a period of three months “with no need to further examine the degree of fault.”

WADA also issued a statement saying Richardson can reduce the ban by another month pending her agreement to undertake a treatment program.

Richardson was expected to compete in the 100m at the Games after posting 10.72 seconds in April and winning the 100m at the US Olympic Trials with a time of 10.86. Her performance has now been ruled as disqualified.

The fourth-place winner Jenna Prandini will replace Richardson in the event, and fifth place winner Gabby Thomas has also been entered in the race.

Richardson’s viral performance and personality won over the hearts of many, including former First Lady Michelle Obama.

She responded to the incident on Twitter by simply saying, “I am human.”

Three more Ducks clinched their spot on the U.S. Olympic team headed to Tokyo this summer with incredible races on Sunday night. 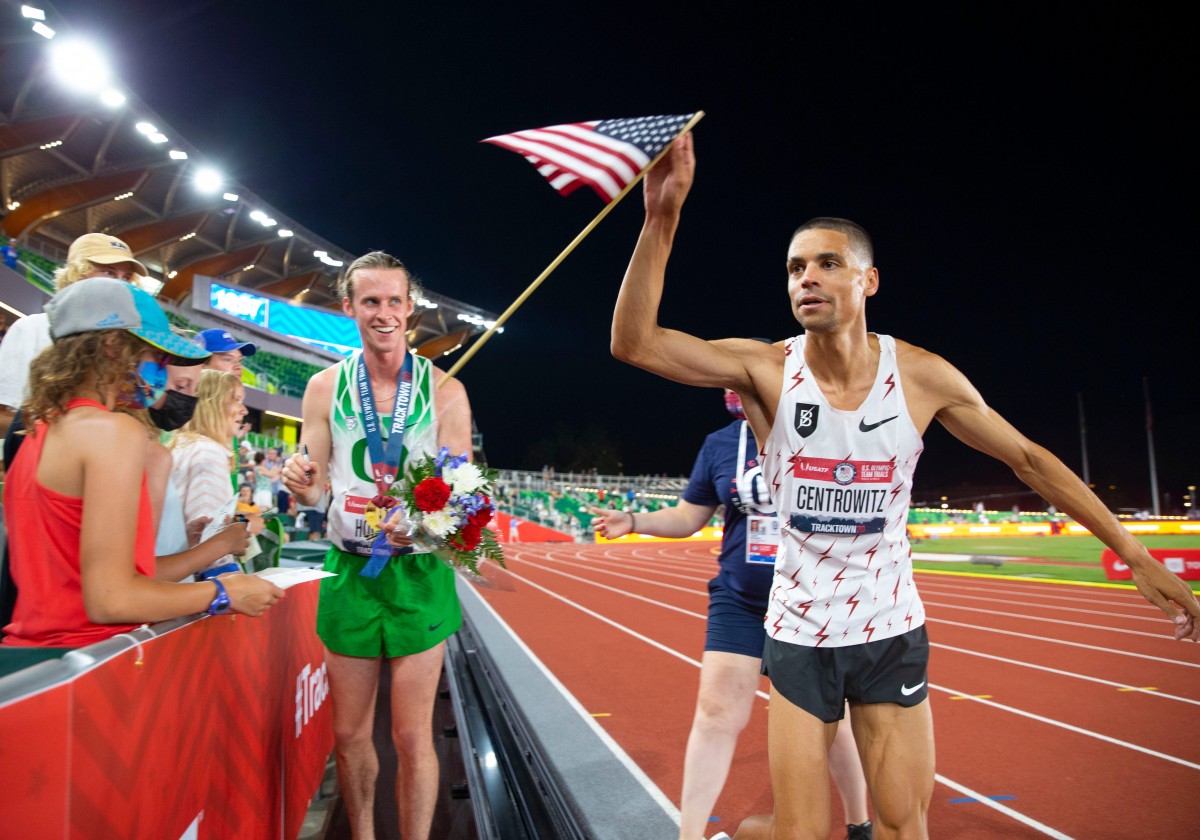 The list of athletes with ties to the Oregon Ducks heading to the Tokyo Olympics grew on Sunday night.

With the final day of the Olympic Trials coming to a close, a trio of Eugene legends secured their spot on the team, with Raevyn Rogers, Cole Hocker, and Matthew Centrowitz all giving fans a show at the new Hayward Field.

The night started out for the Ducks with Rogers gritting it down the back stretch of the 800m final, finishing second behind 19-year-old phenom, Athing Mu, who ran a world-leading 1:56.07. Rogers time of 1:57.66 was good enough to guarantee her a spot on her second Olympic team.

The biggest fireworks of the night came in the men’s 1,500m final, when Centrowitz and Hocker battled down the stretch and provided a thrilling ending. Centrowitz led going into the final 200 meters, but Hocker mounted a huge kick and crossed the line in 3:35.28 to take first place and win the final. Centrowitz crossed in 3:36.34 to take second place and earn a trip to defend his title at the Olympics.

Technically, Hocker does not have the Olympic standard time of 3:35.00, but his world ranking is high enough to qualify him for the games in Tokyo.

UPDATE: Cole Hocker is extremely likely to qualify via his world ranking. His ranking is now the highest among non-standard athletes (1,232pts) https://t.co/QikzYDKsfM

Unfortunately, the Olympic dreams for long-jumper Demarcus Simpson, Colby Alexander, Sam Prakel, and Kyree King ended on Sunday night, as they failed to finish in the top 3 of their respective events. 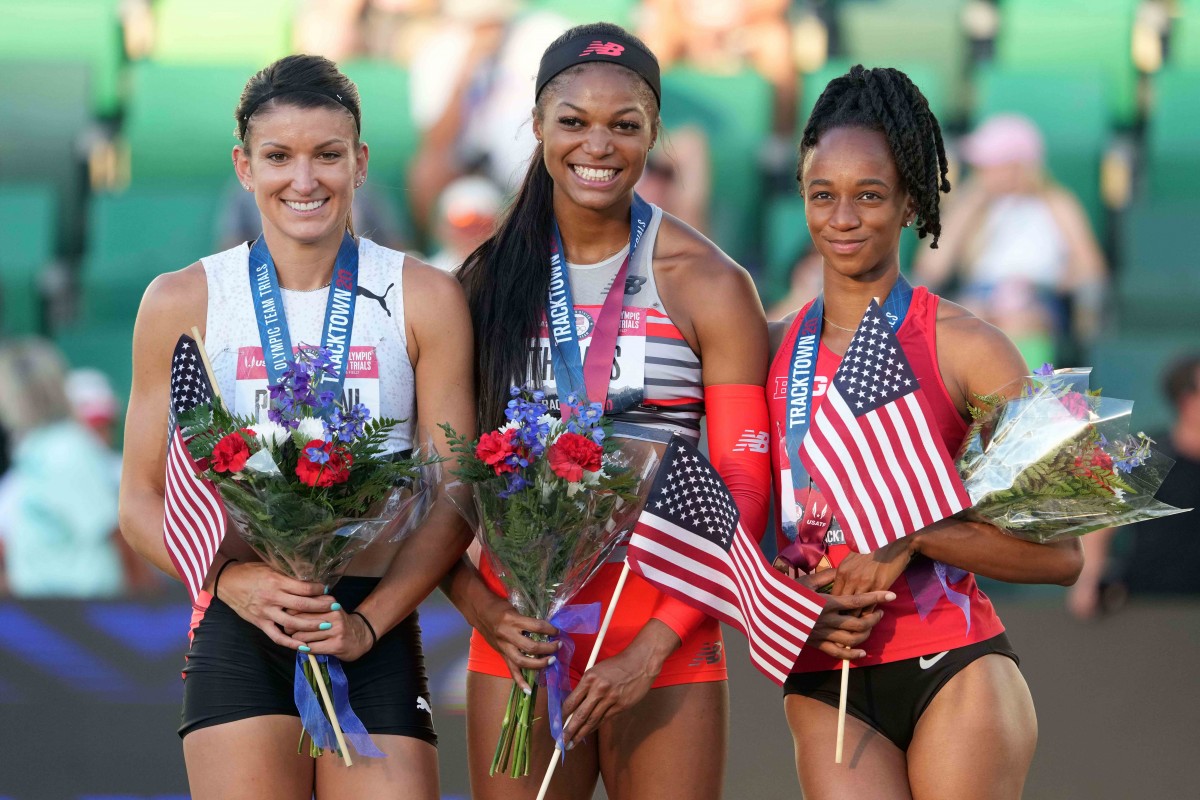 Ohio State has another track and field athlete that will be a part of the 2020 Summer Olympic Games in Tokyo.

Sprinter Anavia Battle finished third in the 200-meter finals late Saturday evening at the Olympic Trials in Eugene, Ore. She ran a personal best of 21.95, just behind Gabby Thomas (21.61) and Jenna Prandini (21.89), who went finished first and second.

Battle clearly has been training hard, as she eclipsed her results at Ohio State this season and continued to put up faster times each step of the way in the trials. She sprinted to a 22.37 time in the first round to qualify for the semifinals fifth overall. She then went 22.32 in the semifinals to qualify fourth overall for the finals, before breaking the 22.00 mark.

Now it’s time to continue to grind away and try to shock the world in Tokyo.