Oklahoma 55 Florida 20. The 10 ten things you need to know about the Oklahoma win over Florida in the Goodyear Cotton Bowl Classic. 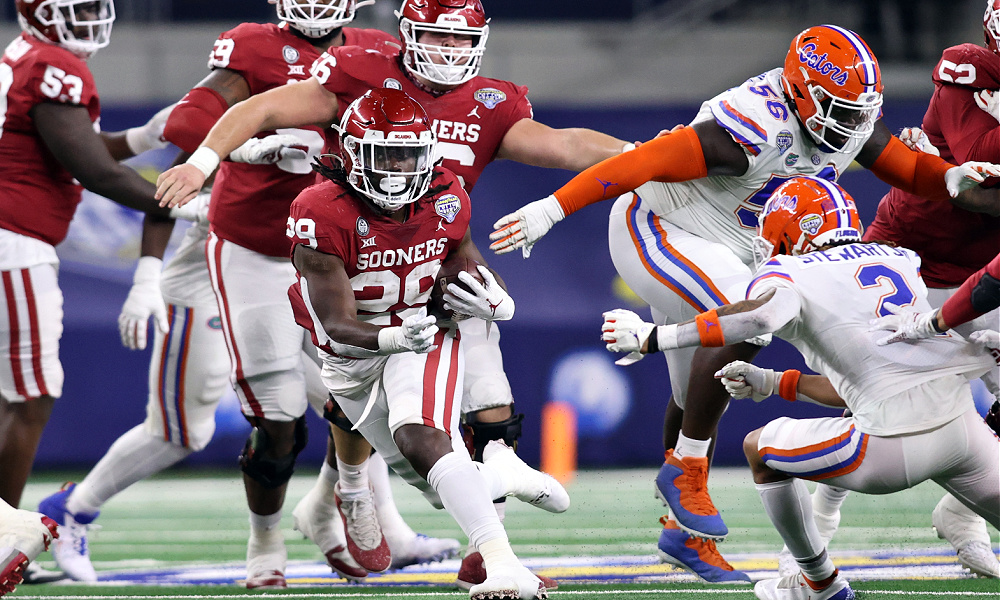 Oklahoma 55 Florida 20. The 10 ten things you need to know about the Oklahoma win over Florida in the Goodyear Cotton Bowl Classic.

10. Several things can be true at once here.

Yes, Florida was missing way too many of its top players. Yes, it’s almost impossible to just Next Man Up it when you’re replacing too many key parts. Yes, teams that lose the SEC Championship normally don’t get up for the bowl game after getting their hearts ripped out – going 2-4 in the last six bowl games. Yes, Florida didn’t have any real answers after making a good-fight mini-comeback early on, and yes, they really, really, really weren’t the team that was so strong throughout the 2020 regular season.

9. Yes, it can be true that Oklahoma is very, very good right now.

It’s a different team than it was at the beginning of the season. It’s sharper, it took advantage of the opportunity, and it did what a good team is supposed to do in a situation like this and win and win big. It’s not Oklahoma’s fault that a bunch of Florida players didn’t want to play in this.

8. One game like this isn’t going to change anything, but …

The College Football Playoff needs to be expanded so it includes all Power Five conference champions. Yeah, yeah, yeah, again, all of those things about Florida are true, but as sharp as the Sooners were and the way they played, it’s not crazy to think they could do some damage in a bigger sort of tournament.

7. This is why the voting needs to be done after the bowls.

Kyle Trask had a marvelous season, it wasn’t his fault the top four receivers were gone, and there wasn’t anything he could do in a game like this, but he’s a finalist, and he wins 16-of-28 for 158 yards and three interceptions with no touchdown passes.

It got quirky, it threw a bunch of things at the wall to try fixing the glitch, and Emory Jones at least gave Gator fans hope. He only hit 8-of-16 passes, but he tied for the team lead with 60 rushing yards on 11 carries. He made the game interesting in the rotation.

It’s not fair to rip him in any way for being 0-3 in bowl games before this when those three were in the College Football Playoff, but there’s something to be said for winning the final game of a season. Again, give Oklahoma and Riley credit here. If the other side isn’t as strong as it should be, then win 55-20.

It’ll be easy to hammer on defensive coordinator Todd Grantham after a rough season and with a defensive performance like this, but this was an impossible situation for the entire Florida program to deal with. This wasn’t some normal bowl game. You’re not going to beat the Big 12 champs with that sort of firepower when you’re missing so much talent. However, these types of losses stick to SEC coaches. SEC fan bases are able to use logic and reason to a point, but 55-20 is 55-20.

3. Spencer Rattler was just okay, and it was more than enough.

He’ll be one of the early favorites for the 2021 Heisman – Oklahoma has gone too long without a quarterback being in the mix for the thing – and in a game like this, not throwing a pick or making any big mistakes was enough. That’s being light with the praise, though – he completed 14-of-23 passes for 247 yards and three touchdowns, and he ran for 40 yards and a touchdown.

He was good, but his supporting cast was awesome.

2. Oklahoma was a different team with Rhamondre Stevenson.

Three different Sooners caught touchdown passes, there were big plays after big plays, and it could’ve been a whole lot worse with just enough misfires to have kept this from getting even uglier earlier.

1. The bowl opt-out problem is a … problem

This year is obviously weirder than all others, but it’s also going to be the norm for these New Year’s Six bowl games that – come on, we’re all adults here – are mostly exhibitions. They’re fun, and they’re a huge deal for the teams, the players, and the fan bases, but there’s a reason why so many players with NFL talent skip out on them.

The Gators guys who opted out almost certainly play if this is some sort of a playoff game.

It’s okay. In a strange way, it’s actually better for Florida to get its young guys some meaningful work and more live game film to start working on spring ball. But something has to be fixed.

The lower-tier bowls normally won’t have the top teams with the top players – one or two guys might opt out, but not enough to make the game bad – and the NFL types aren’t going to skip the College Football Playoff. The New Year’s Six bowls, though, are going to have more and more of what we got in the Cotton.

Even so, 1,205 yards of total offense, a ton of big plays, and an entertaining show for a 55-20 blowout – the 2020 Goodyear Cotton Bowl Classic was worth the watch.