After he captured a second ONE Championship title, Christian Lee wants to go after the UFC’s best in Islam Makhachev. 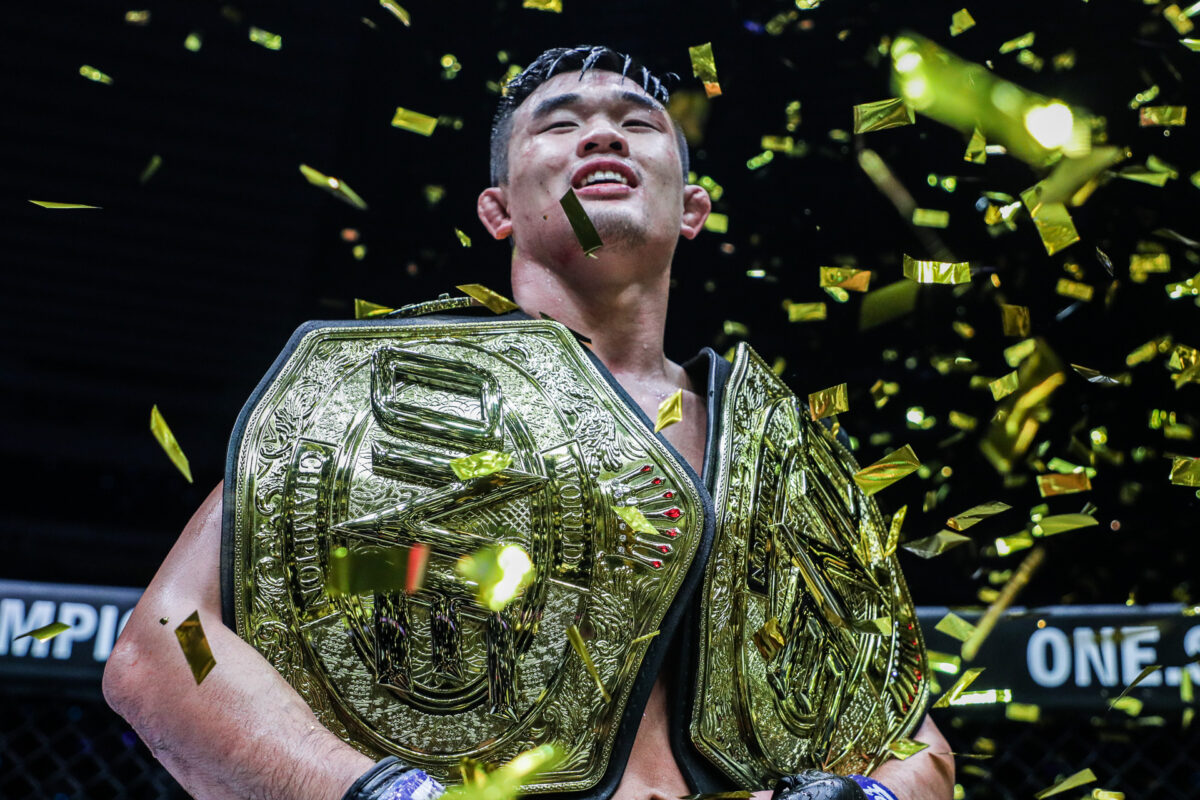 After he captured a second ONE Championship title, [autotag]Christian Lee[/autotag] wants to go after the UFC’s best.

Lee (17-4), ONE Championship’s lightweight title holder, had a comeback for the ages when he rallied to TKO Kiamrian Abbasov to capture the welterweight title in the main event of ONE on Prime Video 4 at Singapore Indoor Stadium.

Lee plans to move back down to lightweight for his next title defense, but if he’s thinking outside the box, he likes the Makhachev fight.

“Right now, I’m the lightweight world champion (and) the welterweight world champion. I want to fight the best of the best,” Lee said. “So whoever that may be. … A potential crossover fight between UFC lightweight champion Islam Makhachev, that’s definitely an exciting fight. But we’ll see where it goes. I’m keeping my options open and just whatever I could do to challenge myself.”

Christian Lee is now the ONE Championship lightweight and welterweight champion. 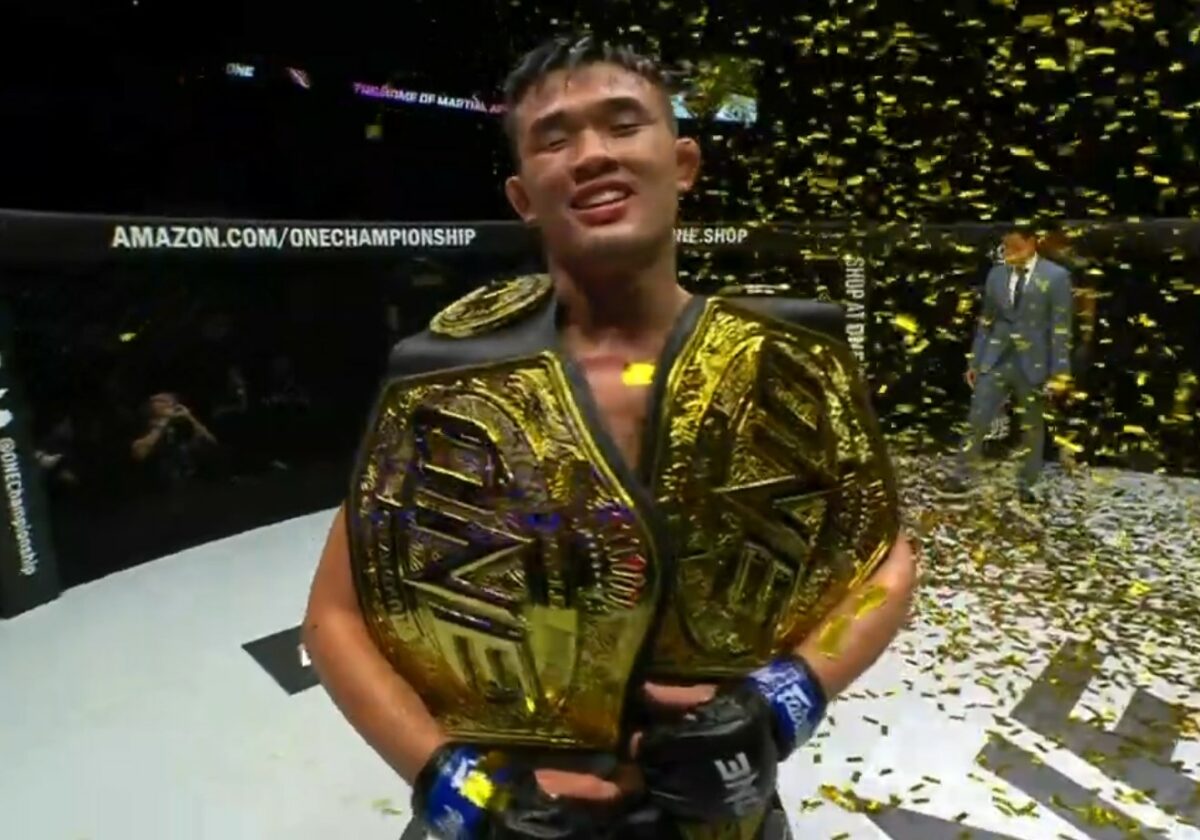 [autotag]Christian Lee[/autotag] proved he has the heart of a champion.

In the main event of ONE on Prime Video 4 at Singapore Indoor Stadium, Lee (17-4 MMA, 17-4 ONE) had the opportunity to become a two-division champion, and nearly came up short against now-former welterweight champ Kiamrian Abbasov. However, Lee dug deep and pulled off one of the best comebacks of the year.

The fight started off with a furious pace, as Abbasov (23-6 MMA, 4-3 ONE) put heavy pressure on Lee with heavy strikes. Lee was able to get a takedown to slow things down, but a few moments after the fight returned to the feet, Abbasov cracked Lee with a hard left hand, sending him crashing to the ground.

Kiamrian Abbasov drops the HAMMER on Christian Lee in Round 1! How is he still standing?! 🤯

Tune in NOW to catch the rest of ONE on Prime Video 4 — LIVE and FREE in the U.S. and Canada with a Prime Video subscription! pic.twitter.com/jKgRKTdwOK

Lee got back to his feet, but Abbasov continued the onslaught of hard strikes. With the referee stepping in closer, the stoppage seemed like it was near, but somehow Lee managed to regain enough awareness to grab a hold of Abbasov and get a takedown to close the round.

In the second and third rounds, Lee worked his way back into the fight by wearing Abbasov down with strikes and takedowns. The momentum steadily shifted in Lee’s favor.

Continuing to build upon his success, Lee turned up the pressure in the fourth round. With Abbasov’s back against the fence, Lee unleashed a series of hard, unanswered leg kicks. A moment later, Lee unloaded a barrage of punches before getting an easy takedown. From there, Lee postured up and emptied the tank until the fight was stopped at 4:20.

With the TKO stoppage, Lee becomes the ONE Championship welterweight (185 pound) and lightweight (170 pound) champion.

“I gotta give Abbasov the credit, he was the champion for a reason,” Lee said during his post-fight interview. “Very tough dude. As you can see, I left it all in the ring, man. I can hardly carry these two belts. I didn’t know where I was, but a true champion never quits, and so, I found a way to come back.”

Lee, 24, has won 8 of his last 9 bouts. In August, he avenged a loss against Rae Yoon Ok to reclaim the lightweight title. With the division cleared out, he moved up to become a two-division champion.

On the other side, Abbasov attempted two-division status of his own in February when he challenged for Reinier de Ridder’s light heavyweight title. He came up short in that bid, and returned to face Lee, dropping his second-straight bout. Prior to 2022, Abbasov won five in a row.

Full results of ONE on Prime Video 4 include:

Christian Lee will compete for a title in a third division at ONE on Prime Video 4 hoping to finally achieve champ-champ status. 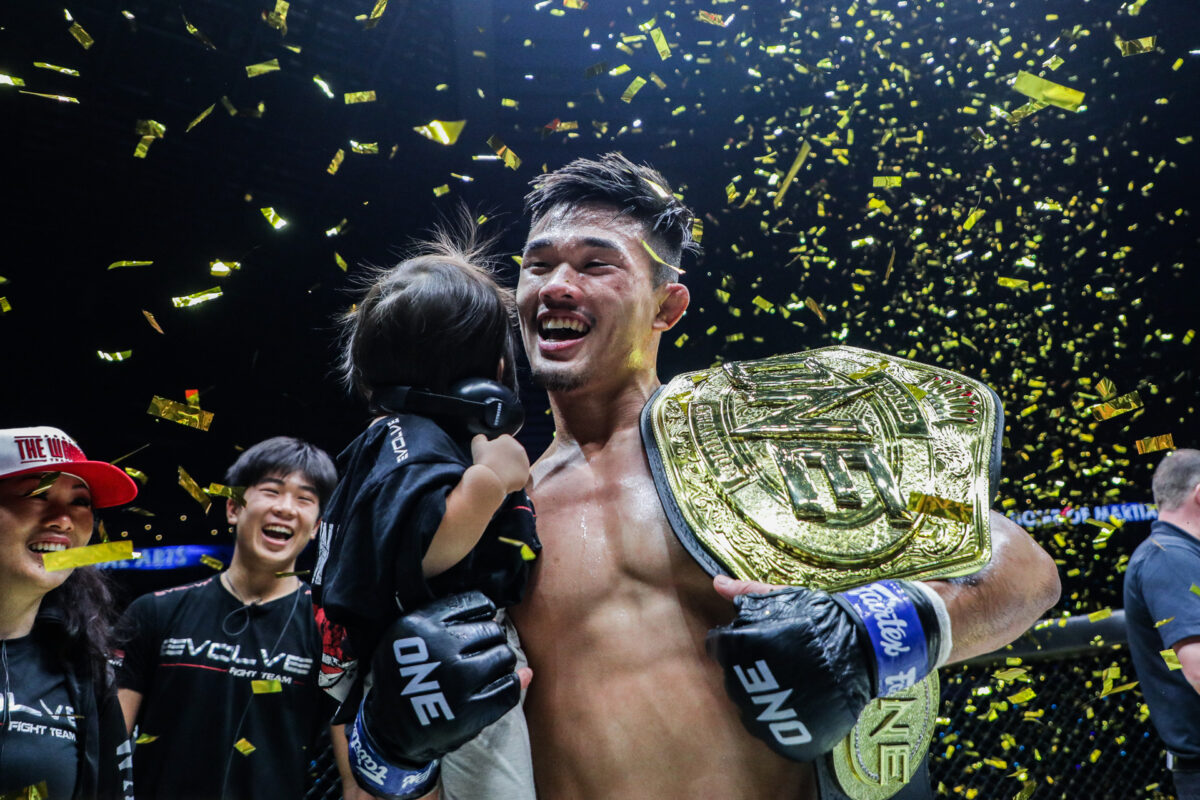 Lee (16-4) reclaimed his lightweight belt in August with a knockout of Rae Yoon Ok, who’d previously took it from him in a decision he thought he won. Lee will now go after a second belt against Kiamrian Abbasov (23-5) in the main event of ONE on Prime Video 4, which takes place Friday at Singapore Indoor Stadium in Singapore.

Abbasov was the welterweight champion. However, he was stripped of the belt after weighing in at 186.25 pounds. The stakes don’t change for Lee, who made weight. If he wins, he will be the new welterweight champ.

“When I started off my MMA career, my first goal was always to be a world champion and then second right behind it was to become a world champion in a second division,” Lee told MMA Junkie Radio. “I always wanted to win two. So when the opportunity presented itself to fight for a second world title, to fight for the welterweight belt, it was too good of an opportunity to pass up, so I’m very excited to have this opportunity.”

Although Lee was a title challenger at featherweight, he won’t change too much in his move up to welterweight. It’s a relatively quick turnaround – especially moving up a weight class.

But Lee said it’s not about size.

“I’m just taking the same mindset, the same approach I took in my first fight at lightweight,” Lee said. “When I moved up from featherweight to lightweight it was also straight away for the title and in that fight, I wasn’t so much focused on my weight. I wasn’t focused on being a big guy in the lightweight division. My main focus was on keeping my speed – of course allowing myself to naturally float up to the weight class limit,

“But just trying to be faster than ever, stronger than ever, continuing to work on my cardio so that I was able to have a good gas tank, and that’s the same thing (I did) for this fight camp. I’m not worried about being a bigger guy or about being a smaller guy. I’m just training as hard as I can. … I think the key to this fight for me is going to be the preparation. It’s not going to come down to who’s heavier or lighter there.”

ONE on Prime Video 4 streams entirely on Amazon Prime, starting with prelims at 8 p.m. ET and the main card at 10 p.m. ET. 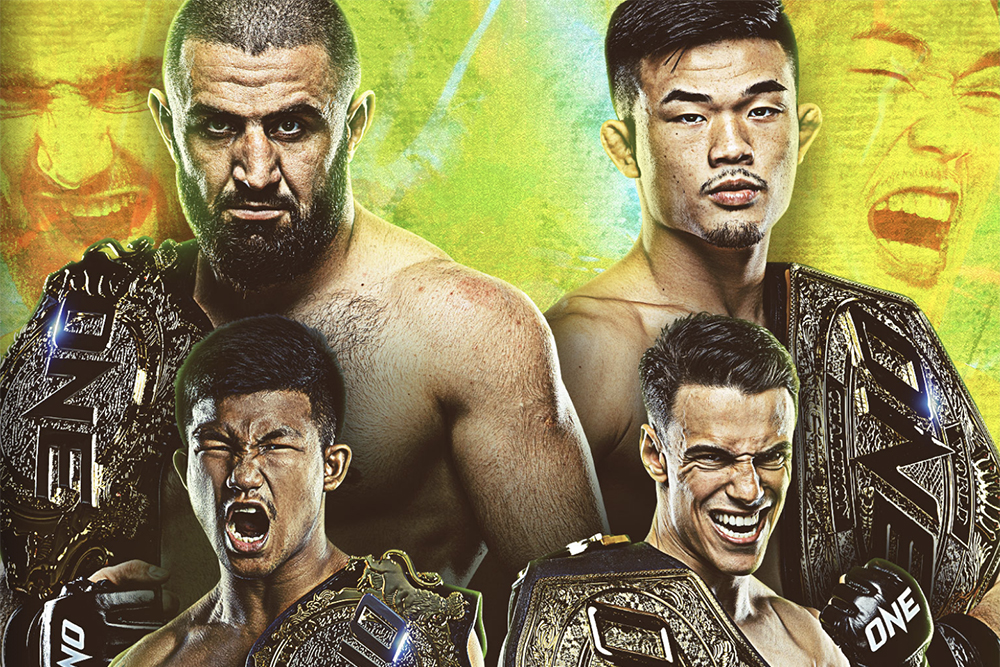 ONE Championship’s second event of the week will serve as its fourth event on Amazon Prime Video. ONE on Prime Video 4 features four MMA fights, including a main event with gold on the line.

Here’s how to watch the ONE on Prime Video 4 card from Singapore, where welterweight champion Kiamrian Abbasov (23-5) puts his title on the line against lightweight champ Christian Lee (16-4).

Thursday’s edition of MMA Junkie Radio with “Gorgeous” George and “Goze” is here.

Thursday’s edition of MMA Junkie Radio with “Gorgeous” George and “Goze” is here.

On Episode 3,310, the fellas welcome UFC flyweight Cody Durden to the show to discuss his recent win and what’s ahead. They also preview the stacked UFC 281 card, Carla Esparza getting booed at the press conference, and more. Tune in!

Stream or download this and all episodes of MMA Junkie Radio over at OmnyStudio. You can also catch it on Apple Podcasts, Spotify, Stitcher, and more. A new episode of the podcast is released every Monday and Thursday.

Monday’s edition of MMA Junkie Radio with “Gorgeous” George and “Goze” is here.

Monday’s edition of MMA Junkie Radio with “Gorgeous” George and “Goze” is here.

On Episode 3,308, the fellas bring on ONE Championship titleholder [autotag]Christian Lee[/autotag]. In addition, they looked back at UFC Fight Night 214, looked ahead to UFC 281, discussed Shane Burgos and Mark Hunt, and much more.

Stream or download this and all episodes of MMA Junkie Radio over at OmnyStudio. You can also catch it on Apple Podcasts, Spotify, Stitcher, and more. A new episode of the podcast is released every Monday and Thursday.

Check out the best social media posts from fighters and other members of the MMA community on Halloween 2022. 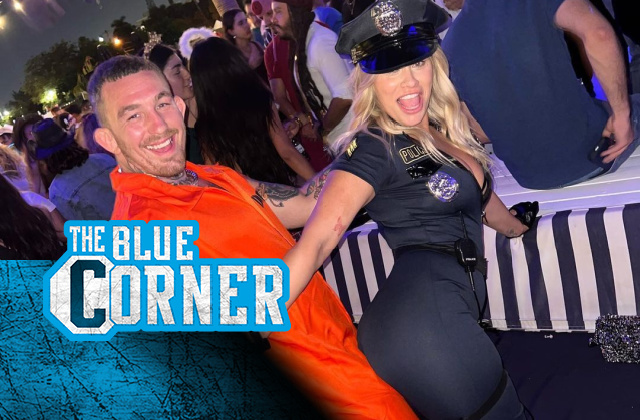 Today is Halloween, and plenty of fighters and other MMA notables are embracing the opportunity to dress up and celebrate the holiday.

Costumes from the past five years set the bar quite high, but the challenge was certainly met with all kinds of creative costumes.

Check below for the top Halloween costumes shared on social media.

Check out these photos from Noelle Grandjean’s unanimous decision win over Lea Bivins at ONE on Prime Video 3. 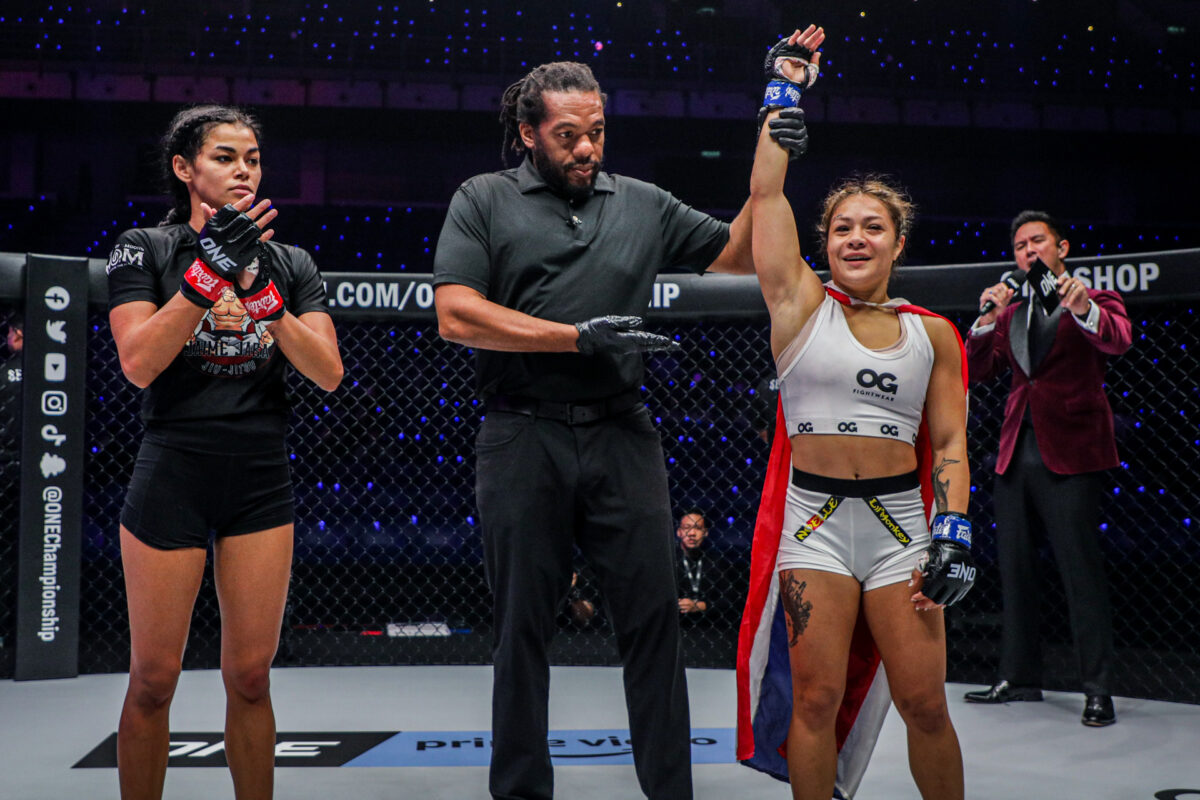 Check out these photos from [autotag]Noelle Grandjean[/autotag]’s unanimous decision win over [autotag]Lea Bivins[/autotag] at ONE on Prime Video 3 in Malaysia. (Photos courtesy of ONE Championship)

Check out these photos from the no contest between John Lineker and Fabricio Andrade at ONE on Prime Video 3 in Malaysia. 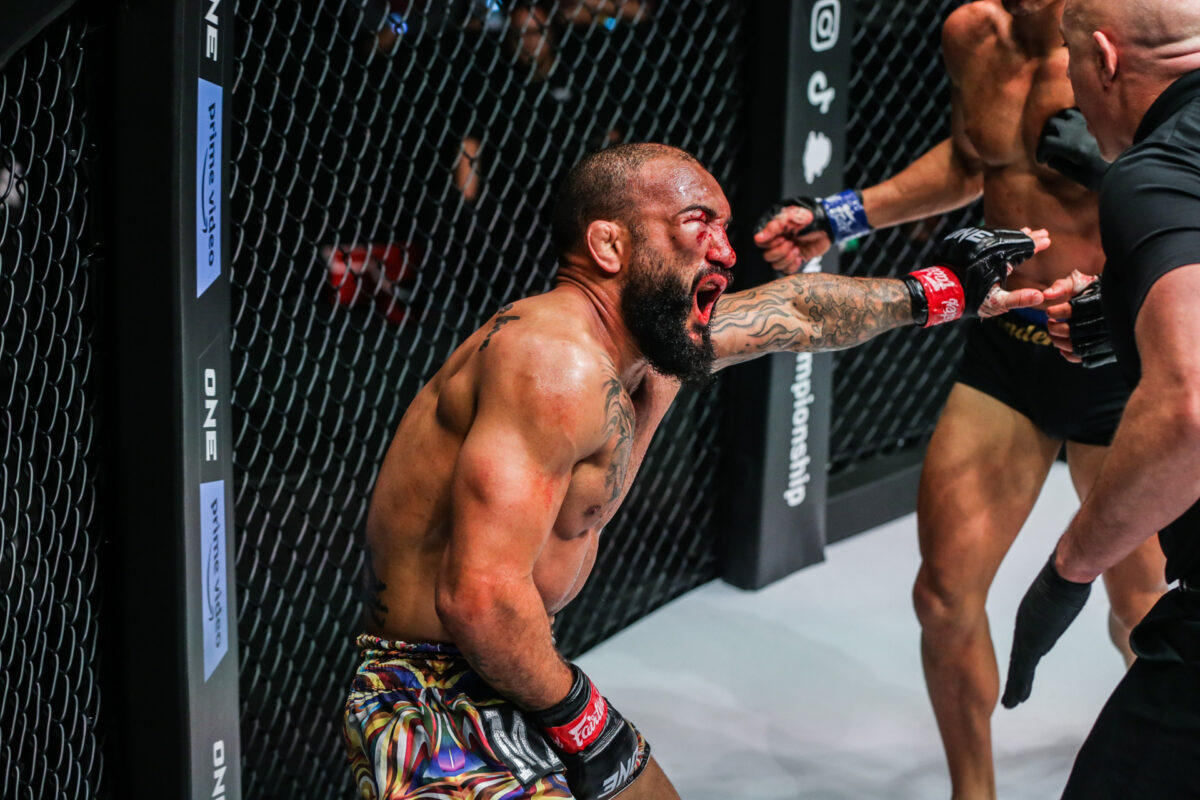 Check out these photos from the no contest between [autotag]John Lineker[/autotag] and [autotag]Fabricio Andrade[/autotag] at ONE on Prime Video 3 in Malaysia. (Photos courtesy of ONE Championship)

John Lineker writhed in pain and simply could not continue after taking a hard knee to the groin that broke his cup. 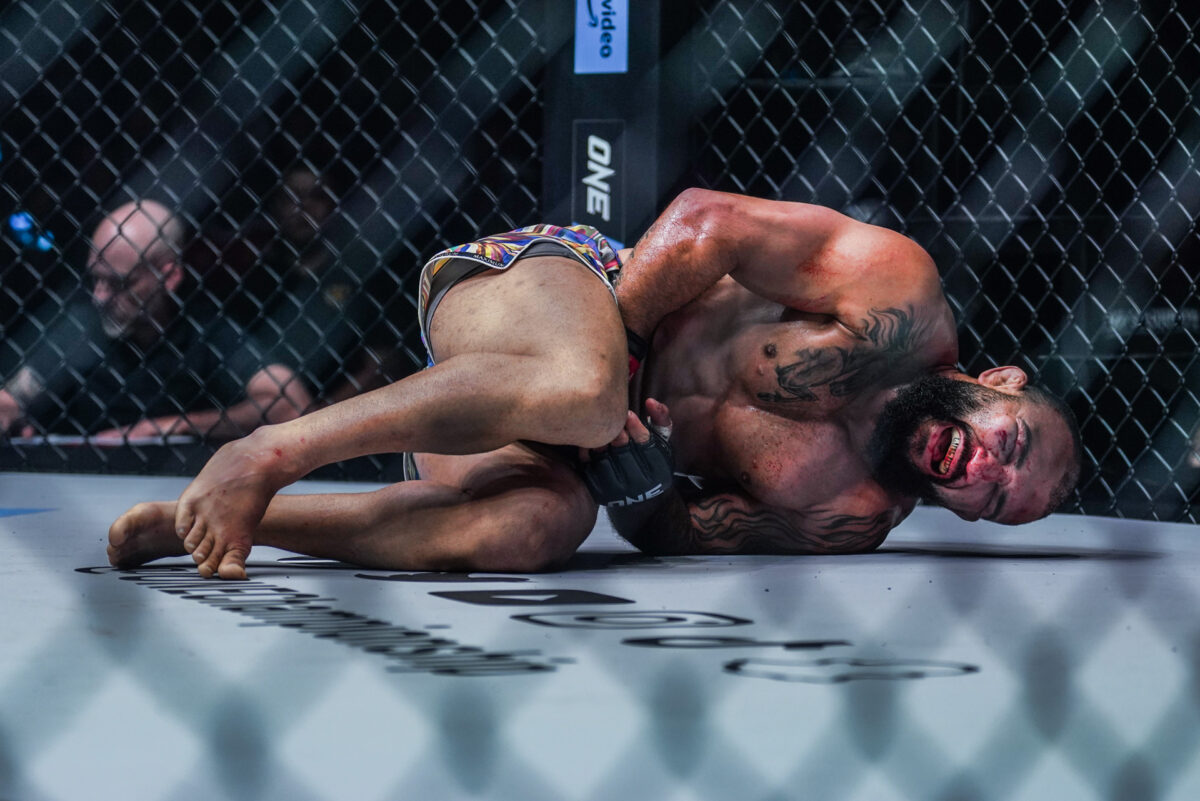 “His cup is broken. His cup has been shattered.”

Those were the words from the ONE on Prime Video 3 broadcast booth as [autotag]John Lineker[/autotag] writhed in pain on the mat after taking a hard knee to the groin from [autotag]Fabricio Andrade[/autotag]. And it was true: The knee was so hard that Lineker removed his broken cup from his shorts.

The illegal blow also abruptly ended Friday night’s main event in Kuala Lumpur as Lineker couldn’t continue, declaring the fight a no contest. With Lineker already stripped of the bantamweight title after missing weight, the result also meant that Andrade – who was still eligible to win the title – couldn’t walk away with the gold.

Not an ideal conclusion for either man, but especially Andrade who might’ve been on his way to a finish after hurting Lineker with a perfectly legal knee before following up too low.

Andrade (8-2) got out to a great start in Round 1 when he started touching up Lineker (35-9) with an assortment of jabs and straight lefts, one of which staggered Lineker. Just as Andrade started to pour it on, Lineker turned into a wrestler and came up with a critical takedown that may have saved him. He controlled Andrade until about a minute remained, and Andrade was back to using his noticeable reach advantage to pelt Lineker with punches. Lineker’s response was to wing overhand punches, and a left caught Andrade before the round ended.

Early in Round 2, Lineker landed a nice combo of four hooks to the body and face. Lineker shot in for a takedown and ate a knee on the way in. When Andrade found his way back to his feet, Lineker continued with his attack, but a key moment came while they were standing, as Andrade landed a hard straight left hand that caused Lineker’s already damaged right eye to close. That allowed Andrade to repeatedly connect in the final minute, which left Lineker with bad swelling. Still, the cageside doctor allowed him to continue.

Round 3, though, didn’t last long. Andrade landed a hard knee to the stomach that hurt Lineker, but when he backed up to the cage, Andrade threw the fateful low blow that ended the fight.