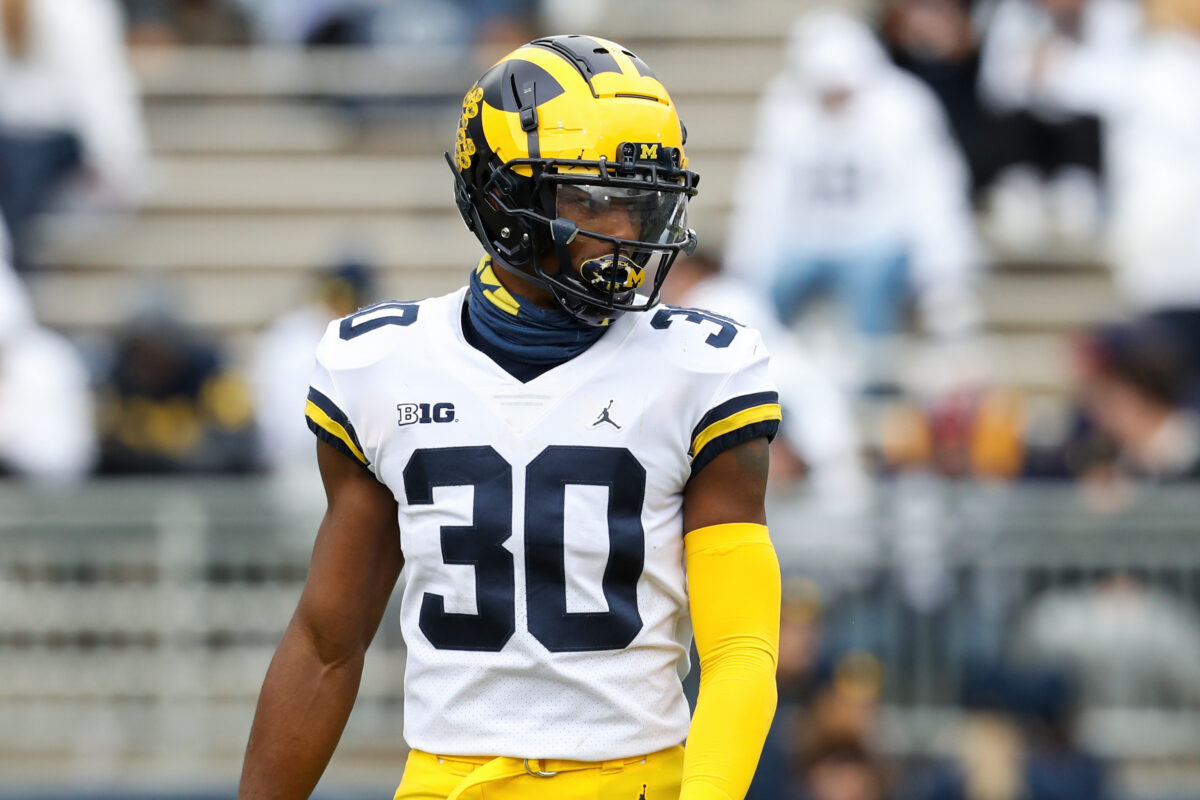 Another first-round pick from the 2022 NFL draft has officially signed his first pro contract.

Defensive back Dax Hill, the No. 31 overall pick in this year’s draft, inked his rookie deal with the Cincinnati Bengals, the team announced Wednesday.

As with all first-round picks, Hill’s is a four-year deal that’s fully guaranteed, with a fifth-year team option.

A dynamic playmaker for the Wolverines at the college level, Hill brings a stellar blend of athleticism, versatility and instincts to the defending AFC champs’ secondary. 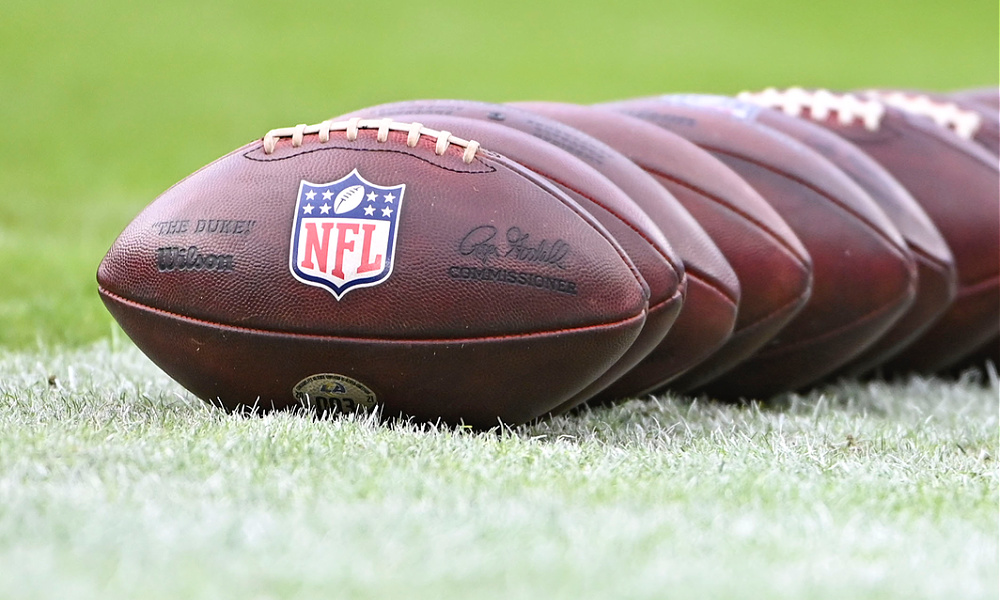 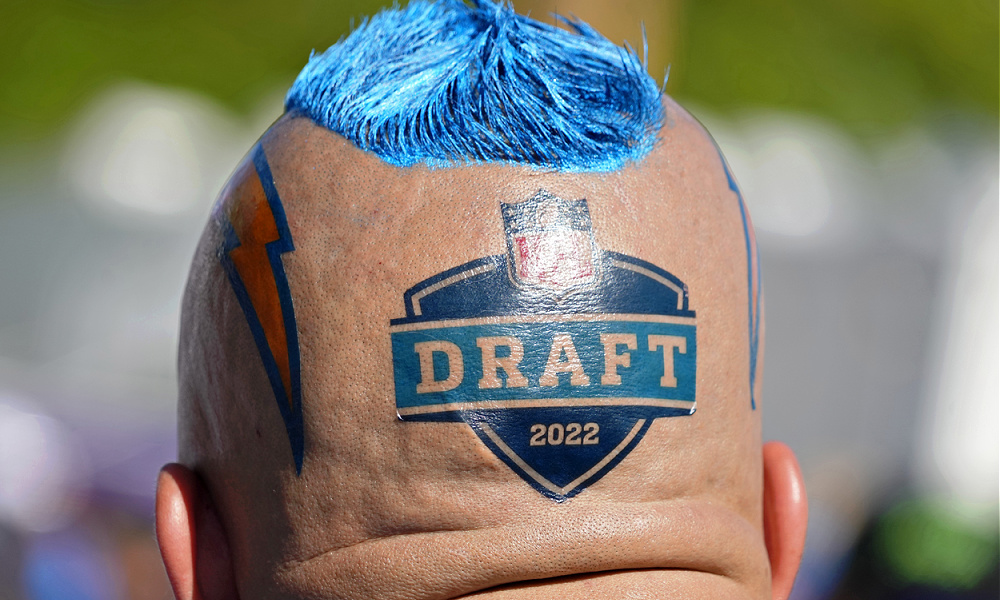 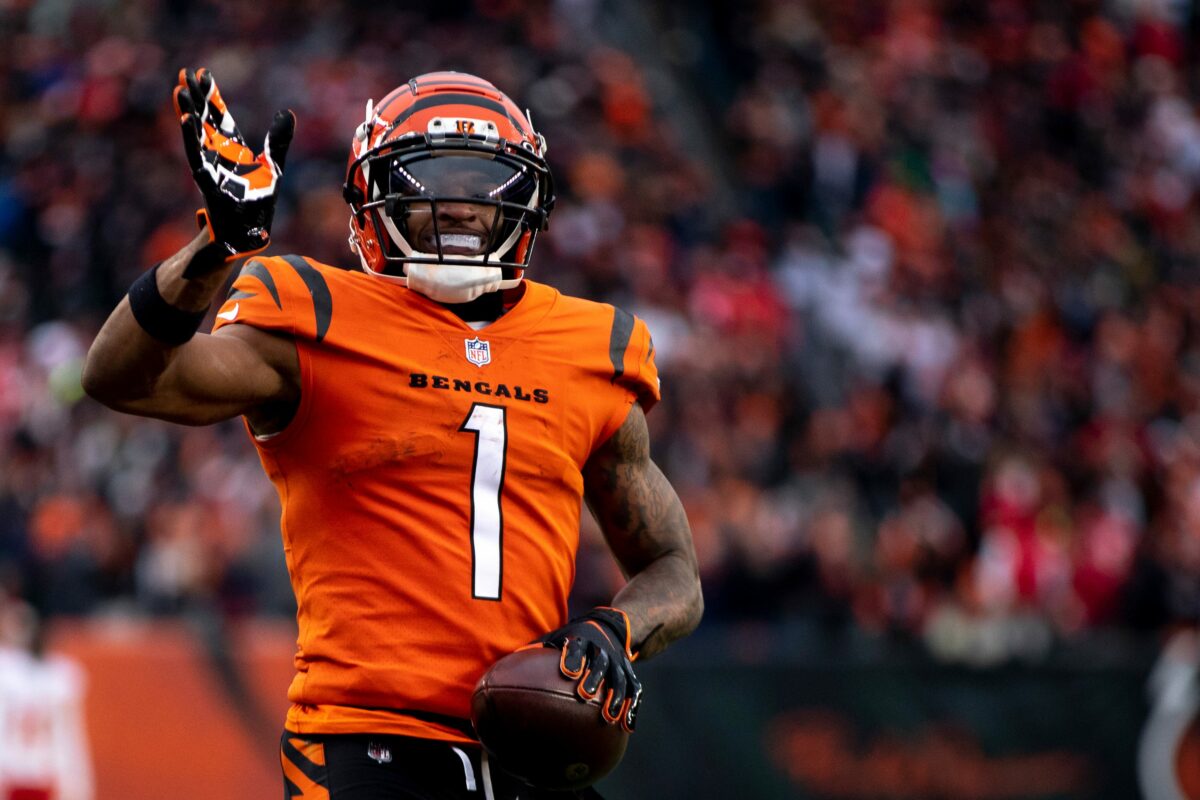 It was an afternoon to remember for Cincinnati Bengals fans, as a 34-31 win over the Kansas City Chiefs gave them their AFC North for the first time since 2015.

It was also another legendary performance from rookie superstar Ja’Marr Chase, who racked up 266 yards on 11 receptions, with three touchdowns.

Here are all three of Chase’s scores from Sunday:

The No. 5 overall pick in the 2021 NFL draft, Cincinnati Bengals rookie wide receiver Ja’Marr Chase has already made some history 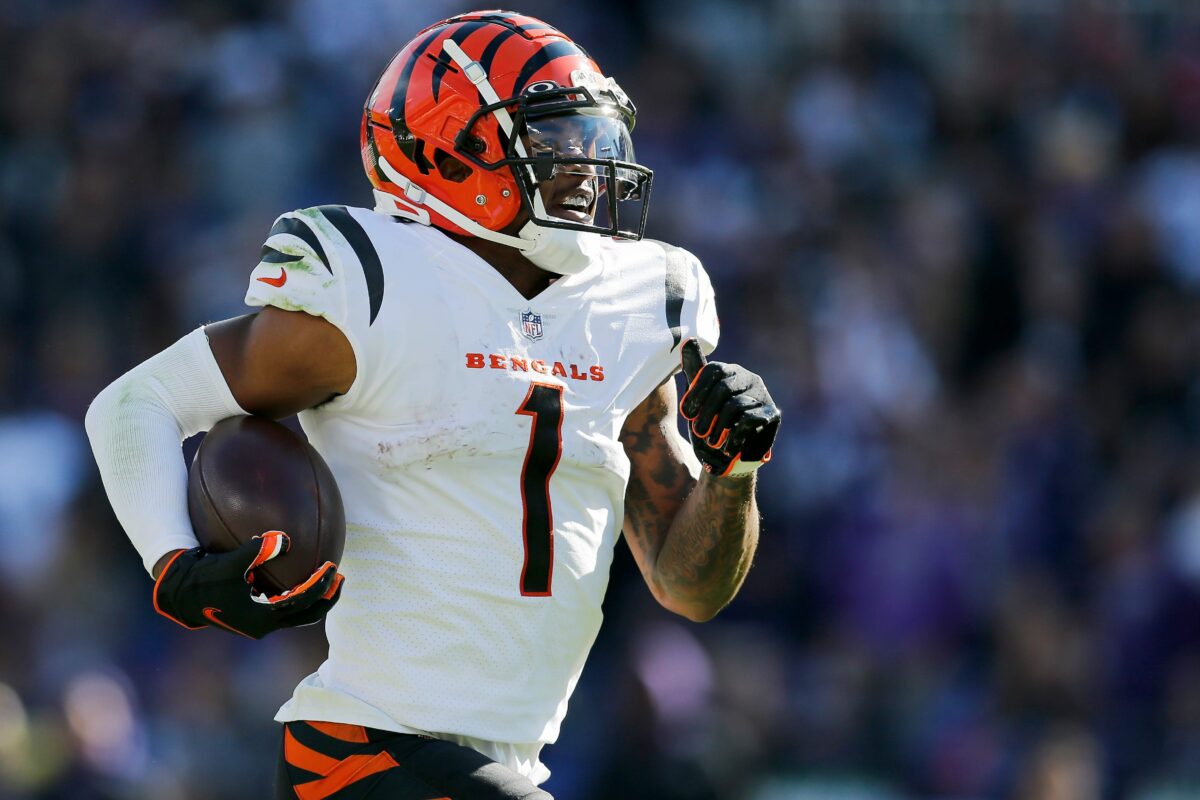 Most in NFL history 👀 pic.twitter.com/aIRbjASHiL

There were plenty of people who criticized the Cincinnati Bengals for not spending their top pick in the 2021 NFL draft on offensive line help, and opting for a wide receiver instead.

After watching what Ja’Marr Chase has done over the first seven weeks of his NFL career, it’s safe to say the Bengals made the right choice.

With his 200-yard performance in Sunday’s blowout win over the Baltimore Ravens, Chase now has 754 receiving yards through his first seven games, the most of any rookie in NFL history.

The former LSU star is making the same kind of big plays he did in college, averaging a ridiculous 21.5 yards per catch so far this season. 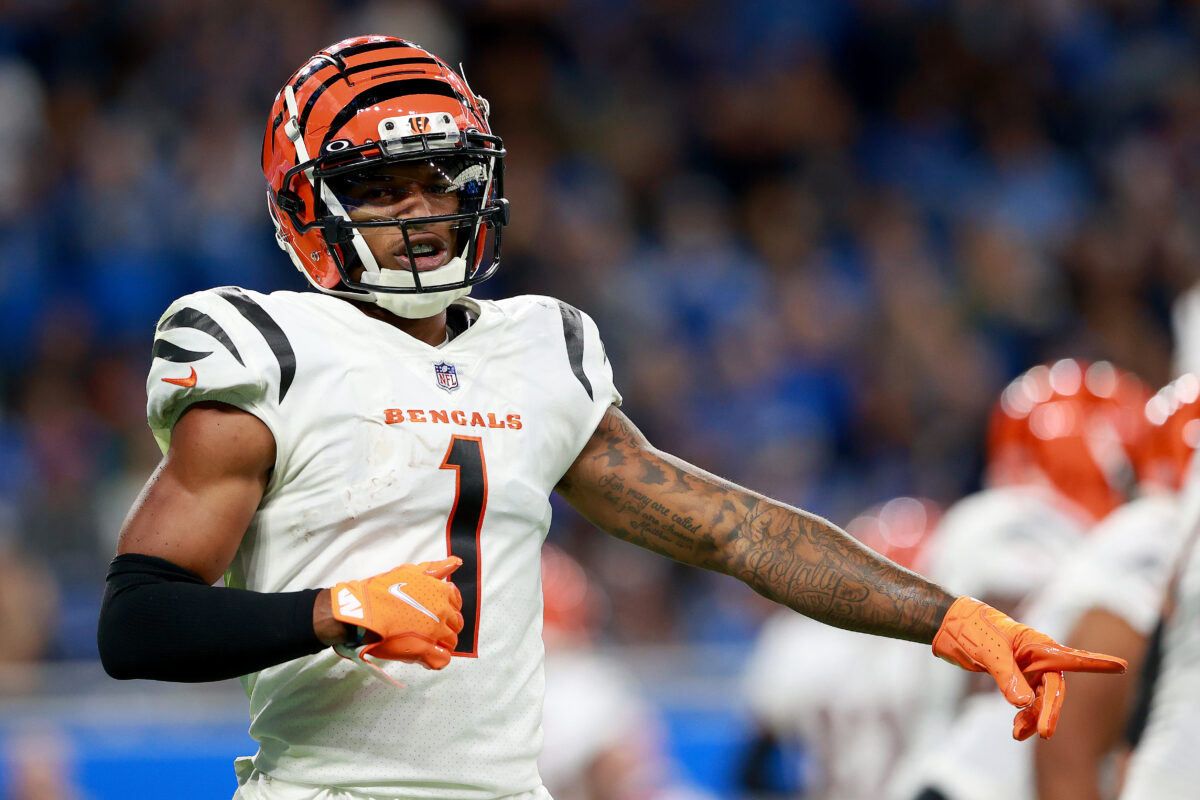 When the Cincinnati Bengals spent the No. 5 overall pick in the 2021 NFL draft on LSU wide receiver Ja’Marr Chase, many criticized the pick.

Bengals quarterback Joe Burrow already had a talented group of wide receivers, but he desperately needed help along the offensive line.

Though a strong argument can still be made that offensive line is the team’s biggest area of need, there’s no denying that Chase has lived up to his draft slot through the first six games of his NFL career.

Burrow and Chase were an unstoppable tandem at LSU, helping lead the Bayou Bengals to an undefeated season and a national title thanks to their ability to connect for big plays down the field. Now, they’re doing the same thing for another Bengals team.

Through six games, Chase is averaging 20.5 yards per catch, the third-highest mark in the NFL. He’s also third in the NFL with five touchdown receptions. leading all rookies.

Wile the Bengals could certainly use some added protection for Burrow, Chase is proving to be everything we thought he could be at the next level.

After preseason drops brought concerns and overreactions, Ja’Marr Chase silenced the doubters in his regular-season debut 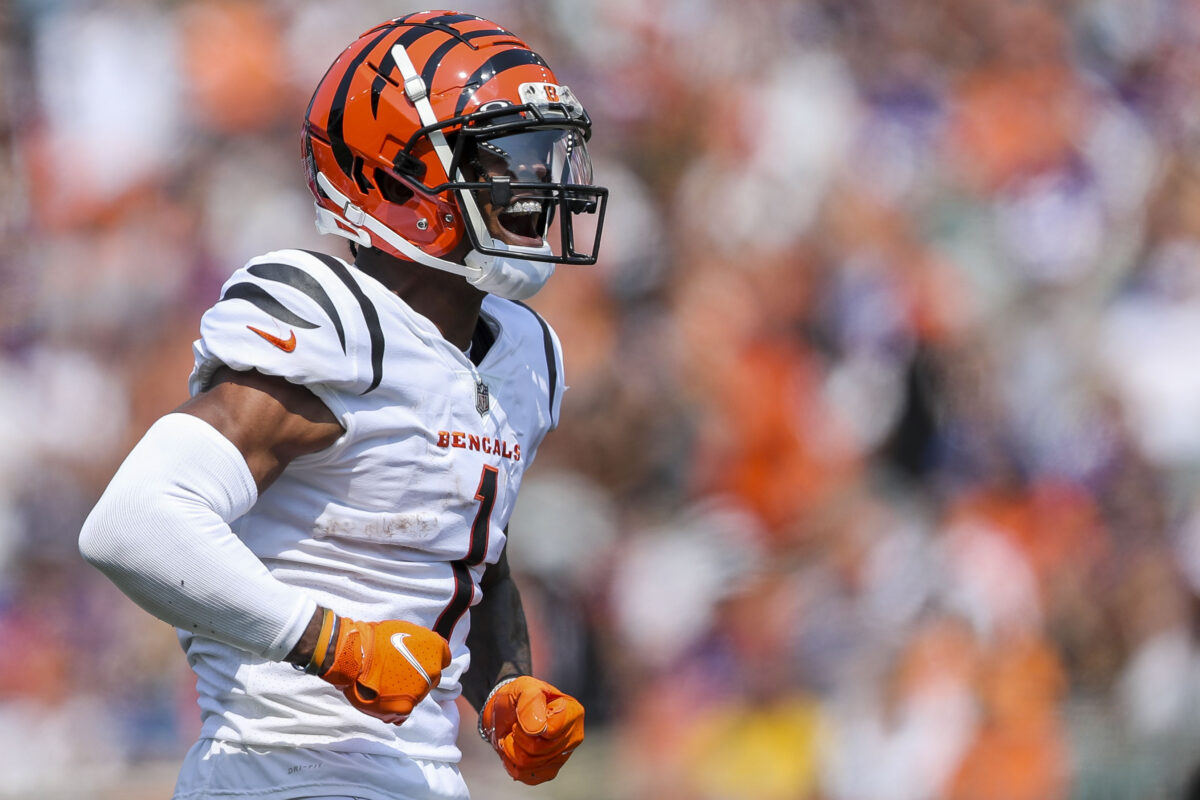 With every preseason drop, some started to wonder if the Cincinnati Bengals had made a huge mistake spending the No. 5 overall pick in the 2021 NFL draft on LSU wide receiver Ja’Marr Chase.

In his regular-season debut, Chase made those concerns look ridiculous.

In Sunday’s overtime win over the Minnesota Vikings, Chase looked like the same guy who dominated the SEC as a sophomore, hauling in five passes for 101 yards and a touchdown. Reunited with the same quarterback that helped him light up the stat sheet and the scoreboard for the Bayou Bengals in 2019, Chase hauled in a 50-yard touchdown from Joe Burrow that looked rather familiar:

Preseason overreactions are an annual tradition, but Chase’s debut is just the latest example of why nothing really matters until the games do. 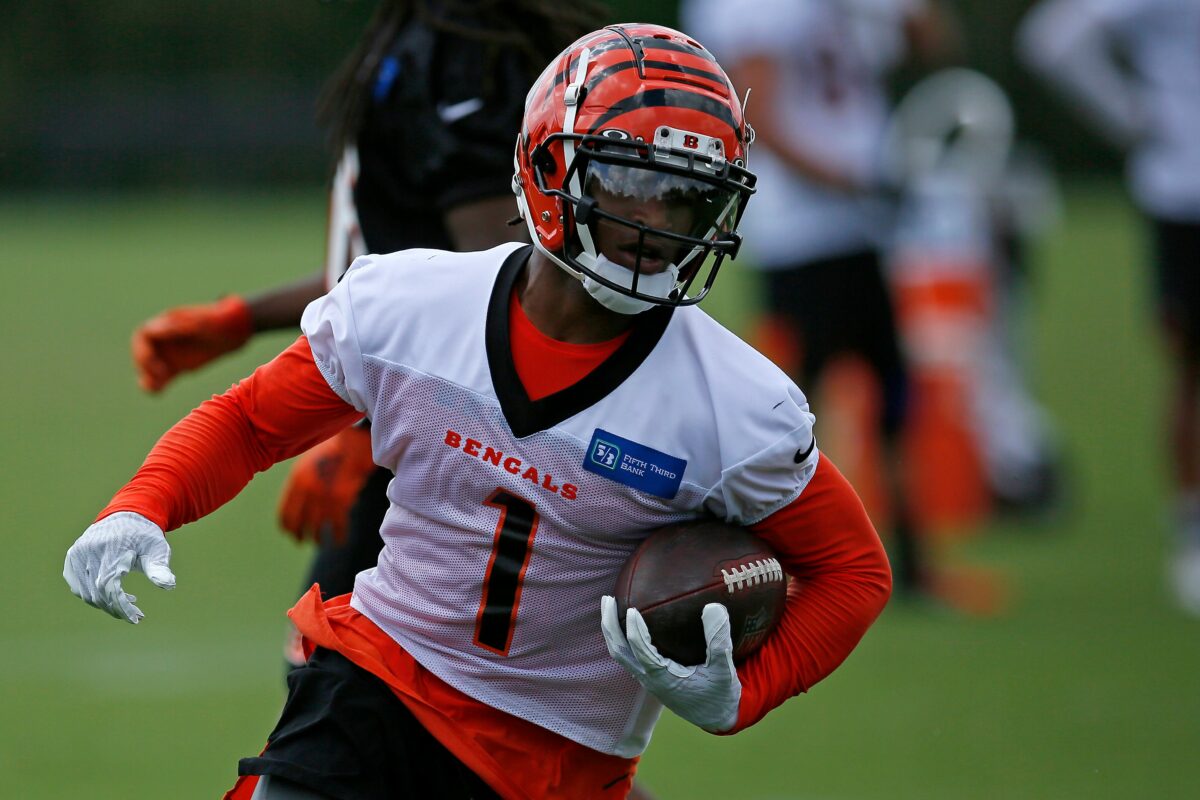 The Cincinnati Bengals took plenty of criticism for bypassing their needs along the offensive line to spend the No. 5 overall pick in the 2021 NFL draft on a wide receiver, but Ja’Marr Chase is doing everything he can to prove they made the right decision.

The latest example? A beautiful, toe-tapping touchdown catch in practice this week.

Reuniting with former LSU teammate Joe Burrow, Chase should immediately establish himself as a dynamic playmaker for the up-and-coming Bengals.

The Cincinnati Bengals expect a full recovery for No. 1 overall pick Joe Burrow following a successful surgery to repair his knee injury 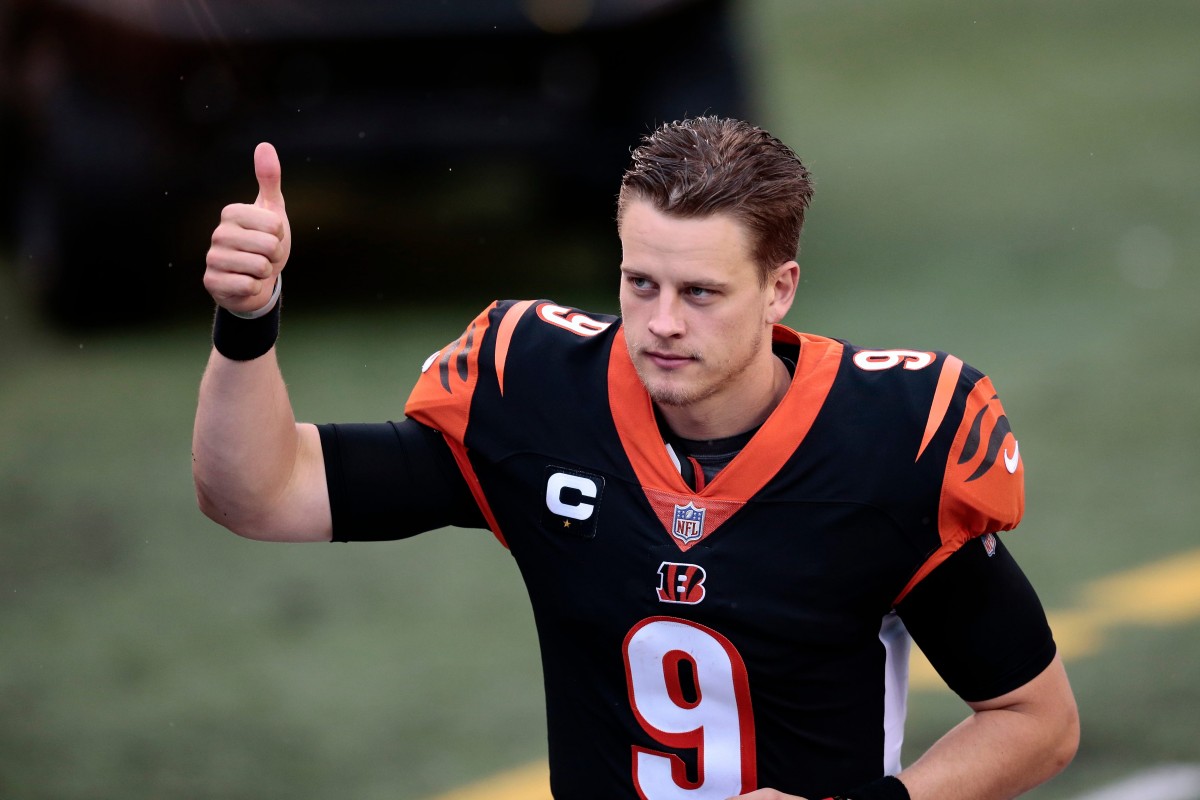 "Joe Burrow underwent successful surgery yesterday. The procedure went as planned and he is expected to make a complete recovery. Joe will begin the recovery process and we look forward to his return."

The Cincinnati Bengals will be without No. 1 overall pick Joe Burrow for at least the rest of his rookie season, but the surgery to repair his knee injury appears to have been a success.

A statement from the team Thursday declared the surgery a success, and the team expects their franchise quarterback to have a complete recovery.

The timeline for Burrow’s return to the field is still very much up in the air, and will obviously depend on how his body responds to the rehab process. Here’s hoping he’s back to full strength as soon as possible, so he can build on the early success we saw from him this season.