Is there any ACC team you consider to be an actual rival of Notre Dame’s? 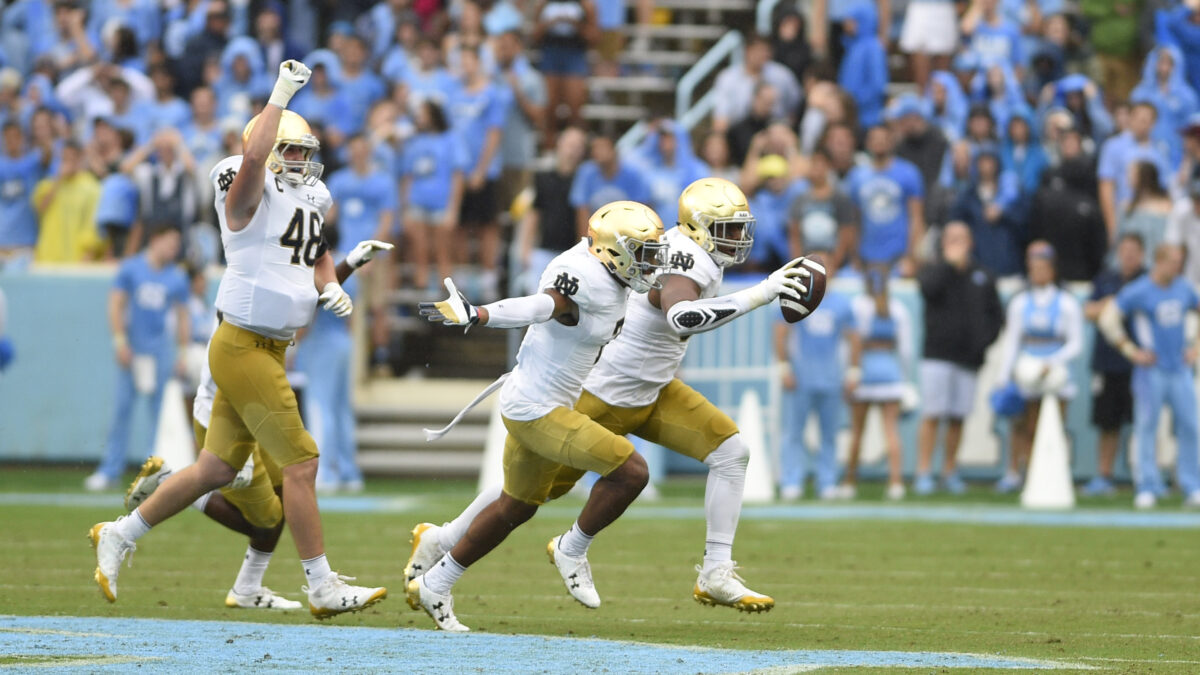 When you think of Notre Dame rivals the obvious teams come to mind.

Southern Cal, or USC as they prefer to be called, is probably first while next would be Michigan, who has bounced on and off the Irish schedule for decades because of the general dislike between the two.

Michigan State and Purdue from the Big Ten both have incredible histories with Notre Dame as does Pitt, who have taken on Notre Dame 69 times over the years.

North Carolina might not show up on the list of great Notre Dame rivals, but believe it or not they’re one of the most frequent opponents the Irish have ever played.  The two first met in 1949 and will play this Saturday for their 23rd football meeting all-time.

In those previous 22 games Notre Dame has dominated to a 20-2 record, including last season’s Halloween eve victory over Carolina that didn’t feel nearly as close as the final score indicated.

The two then met four times between 1965 and 1975 with Notre Dame taking each contest, the final being a comeback which rookie (freshmen were ineligible then) quarterback by the name of [autotag]Joe Montana[/autotag] came off the bench with eight minutes to play to lead a 21-14 comeback victory despite trailing 14-6 upon entry.

As exciting as that one was it’d be the last of Notre Dame and North Carolina anyone would see for over 30 years.  The two didn’t meet again until 2006 when the Irish won going away, 45-26, on a day that [autotag]Jeff Samardzija[/autotag] set the Notre Dame record for career touchdown receptions.

Notre Dame would then make the trip to North Carolina two years later and fall for just the second time to the Tar Heels, 29-24, in a game that went down to the final seconds.

Since Notre Dame’s football affair with the ACC began in 2014, the Irish and Tar Heels have met three times, all of which Notre Dame has been ranked for and ultimately won. 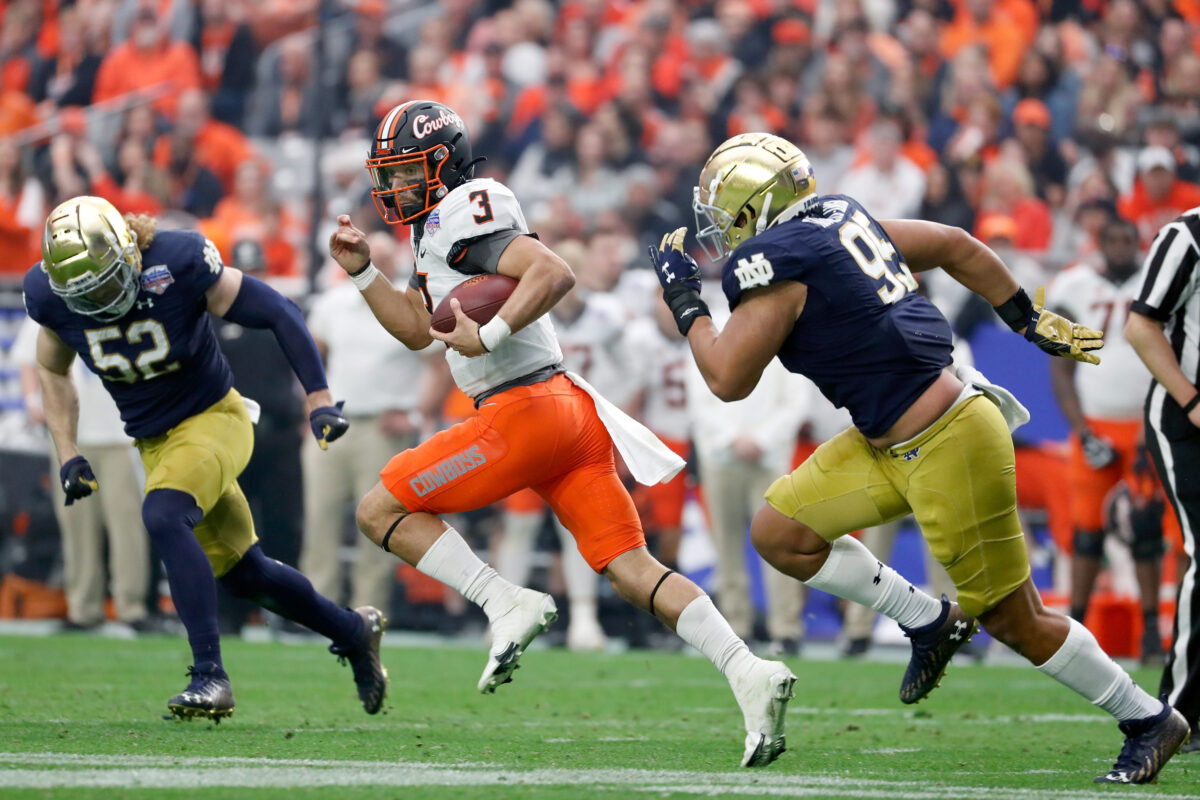 Marcus Freeman’s first game as Notre Dame’s head coach is one that Fighting Irish fans would like to wipe from their memory.  Despite jumping out to a 28-7 lead, Notre Dame ultimately fell to Oklahoma State this past New Year’s Day.

The game was an all-timer for Oklahoma State as head coach Mike Gundy called it the biggest win in program history afterwards.  Perhaps that was a bit of hyperbole in the world where everything a coach says is seemingly a recruiting pitch, but it was a huge win regardless.

With that in mind, Oklahoma State’s Twitter account used St. Patrick’s Day as an excuse to remember their huge win with a fine trolling effort.

Happy St. Patrick’s Day to all who celebrate! ☘️ We hope you have a better day than this leprechaun.#NextLevel | #GoPokes pic.twitter.com/3bFG7w572k

Ultimately harmless, yet caused me a small amount of pain still upon reading it.  Well played, Oklahoma State.

Which team drafting in the top 10 would you most like to see Kyle Hamilton drafted by and why? 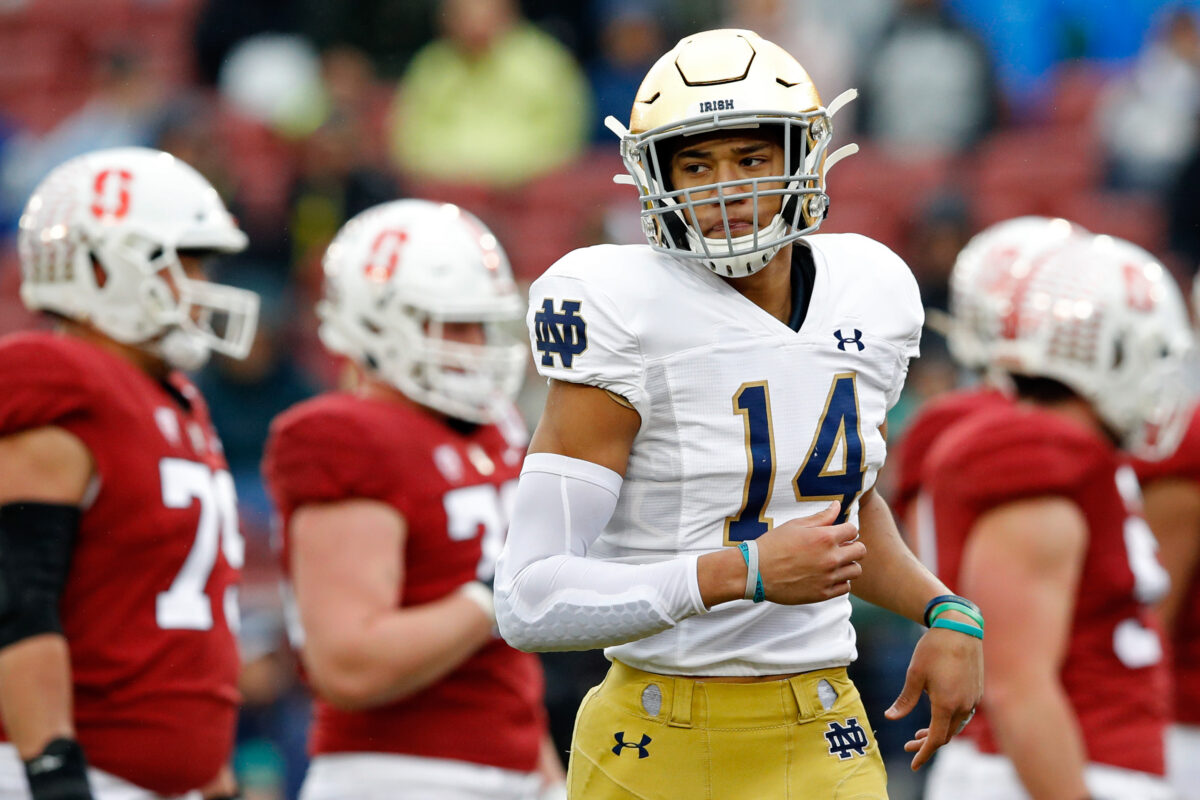 Where will Kyle Hamilton be drafted this spring?  We know the former Notre Dame star will have his name called early in the NFL draft but just how early might that be?

Some projections have had him going as high as second overall while others have him falling towards the end of the top ten.  One of the first to take over the world of analyzing the NFL draft has his latest 2022 mock draft out and sends Hamilton to the New York Jets at fourth overall.

Here is what Mel Kiper, Jr. of ESPN had to say about Hamilton:

“I’m going to stick with Hamilton to the Jets, who were awful in the secondary in 2021 and could lose Marcus Maye in free agency. Because I know you’re thinking it: No, this is not too high to take a safety. Not a safety like Hamilton, who can make a massive impact against the run and pass. He had eight career interceptions at Notre Dame and could play multiple spots along the defense at the next level. Hamilton is a versatile playmaker who will make a defense better on Day 1. The Jets still have another first-round pick to try to improve their offense.”

Just how bad was the Jets secondary in 2021?  They gave up the third-most passing yards in the league while being outscored on average by over 11 points per game.

Is McNulty about to leave? Sure seems like it 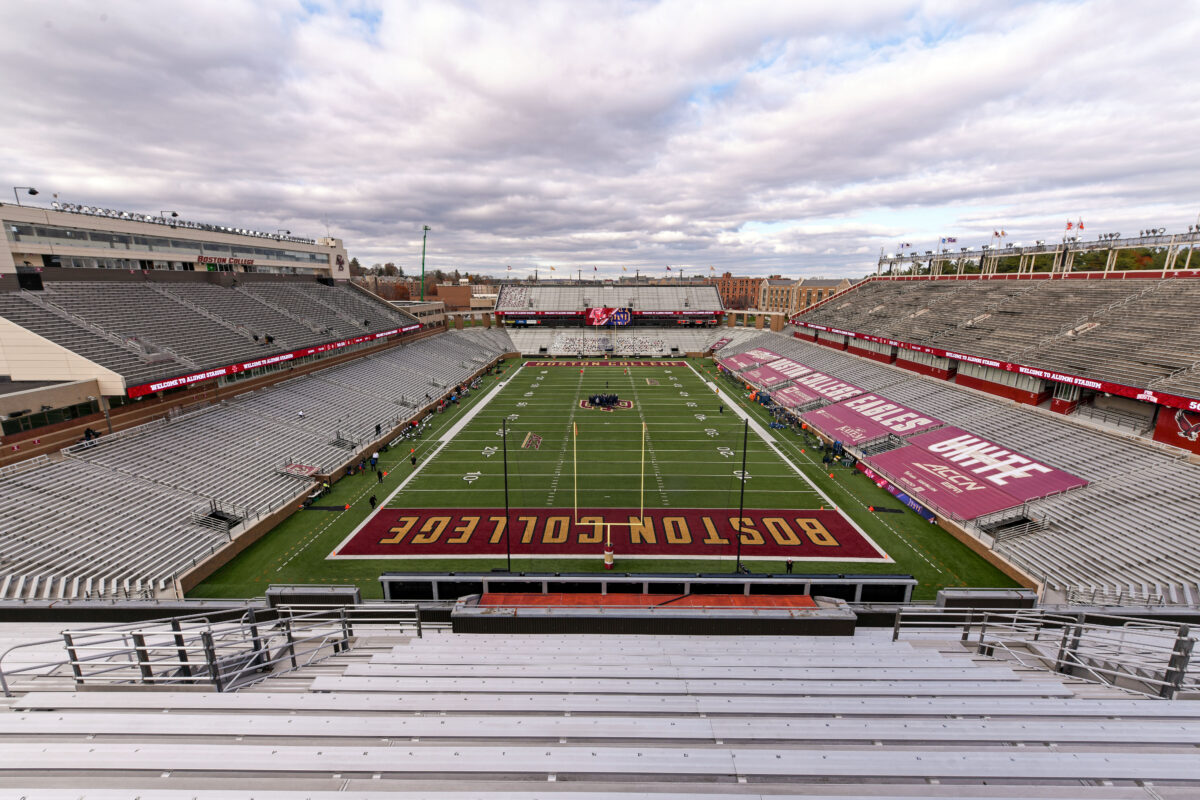 Marcus Freeman’s eventful off-season of replacing assistant coaches after becoming Notre Dame’s head coach may very soon be having another chapter added.  According to a report from Pete Thamel of ESPN, Boston College is zeroing in on current Notre Dame tight ends coach John McNulty as their next offensive coordinator.

McNulty is set to replace Frank Cignetti Jr., who left Boston College for the same role at Pittsburgh. McNulty also previously worked with Eagles coach Jeff Hafley, as the two overlapped on the Tampa Bay Buccaneers staff in 2013.

McNulty has been at Notre Dame the last two seasons and has kept the tight end room at a level that is as high as just about any in college football.  The move would add to the list of assistants that were initially thought to be sticking around but instead won’t actually be a part of Freeman’s first staff at Notre Dame.

Which is the best and which hurts the worst? 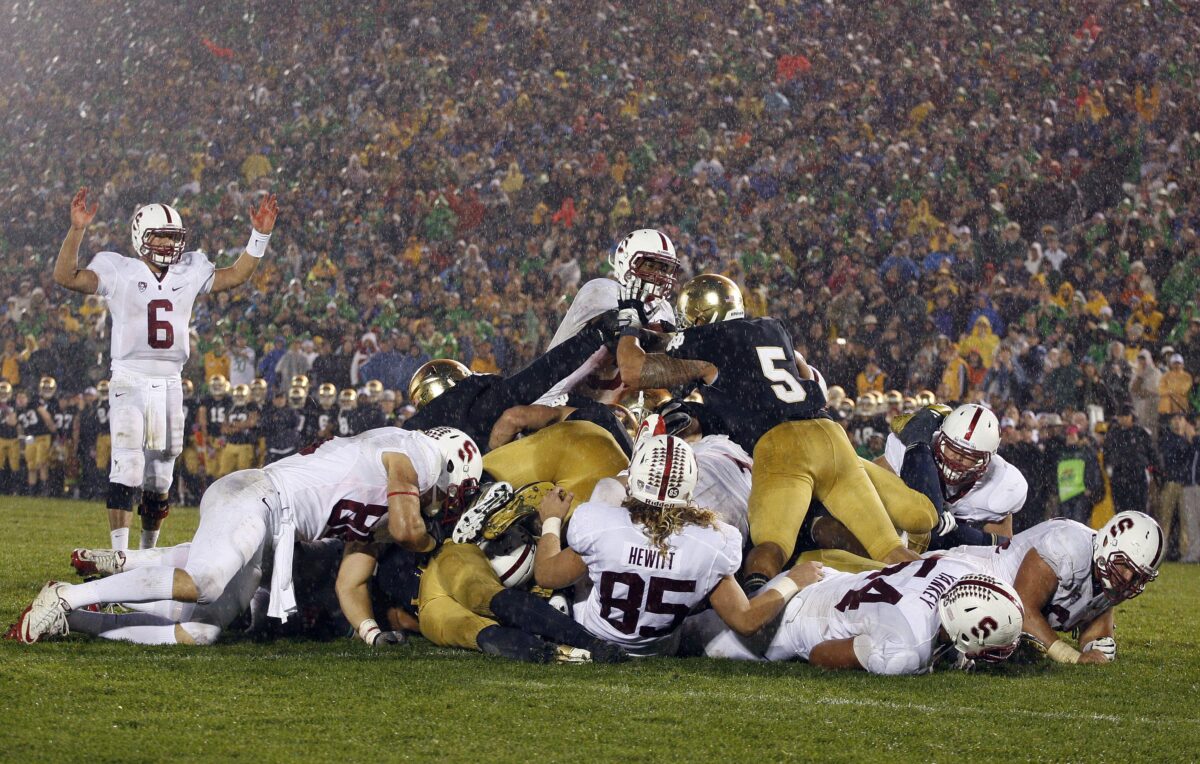 Notre Dame has been playing football a long time but Sunday’s win over Florida State was the first game in the history of the program that the Fighting Irish recorded an overtime win away from Notre Dame Stadium.

It’s worth noting that overtime only came to be in college football in 1996 but a quarter century without a road overtime win is impressively sad when you consider how many opportunities Notre Dame has had in that situation.

Warning:  some of what you are about to see is going to bring back awful memories if you’re a passionate Notre Dame football fan…

Best of luck to Isaiah 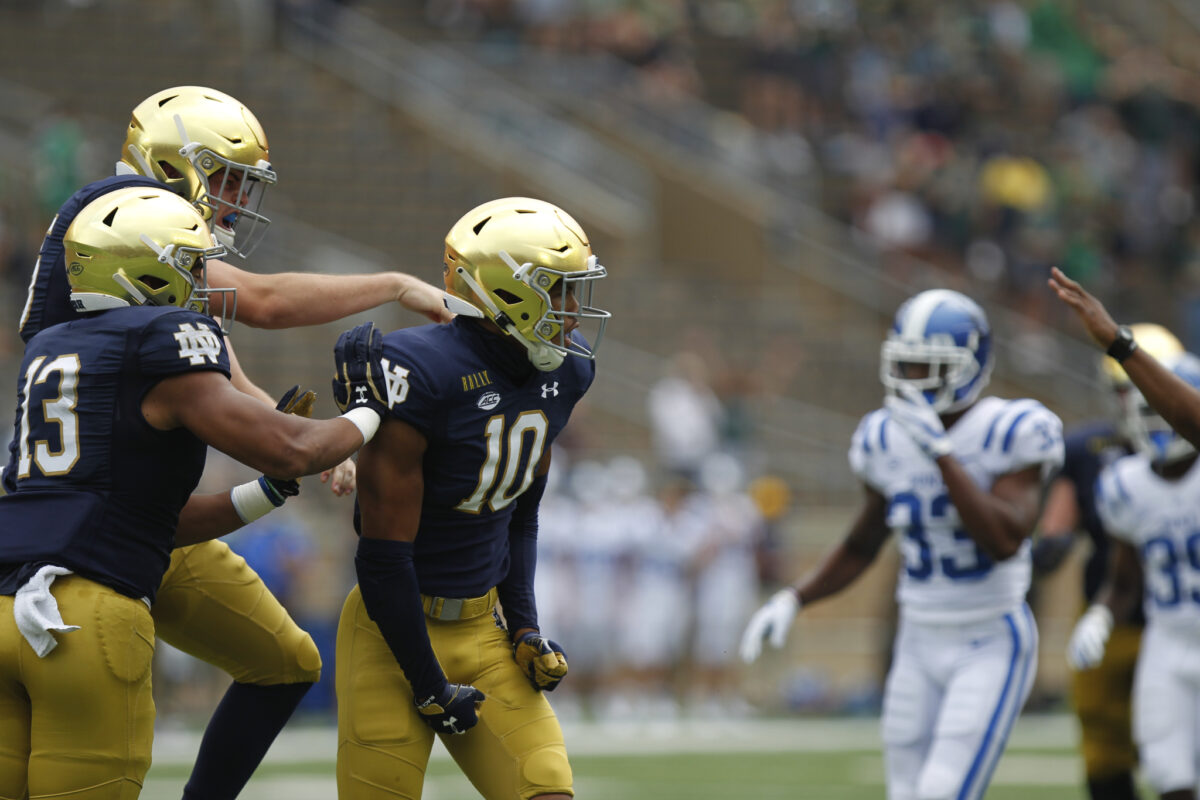 Former Notre Dame and Ohio State safety/linebacker Isaiah Pryor won’t return to school for a sixth season of college football and will instead try and take his skills to the NFL.  Pryor will get a chance to showcase those skills next weekend as he’s been invited to participate in the annual NFLPA Collegiate Bowl.

Pryor played from 2017-2019 at Ohio State before graduating and transferring to Notre Dame ahead of the 2020 season.  He saw the field a significant amount this past season as his career high 42 tackles helped Notre Dame’s defense to allow just 19.7 points per game.

Pryor is listed at 6-1, 217 pounds and attended high school at IMG Academy in Florida.

Every Notre Dame first round pick since 1975

Who you got tonight in Indy? 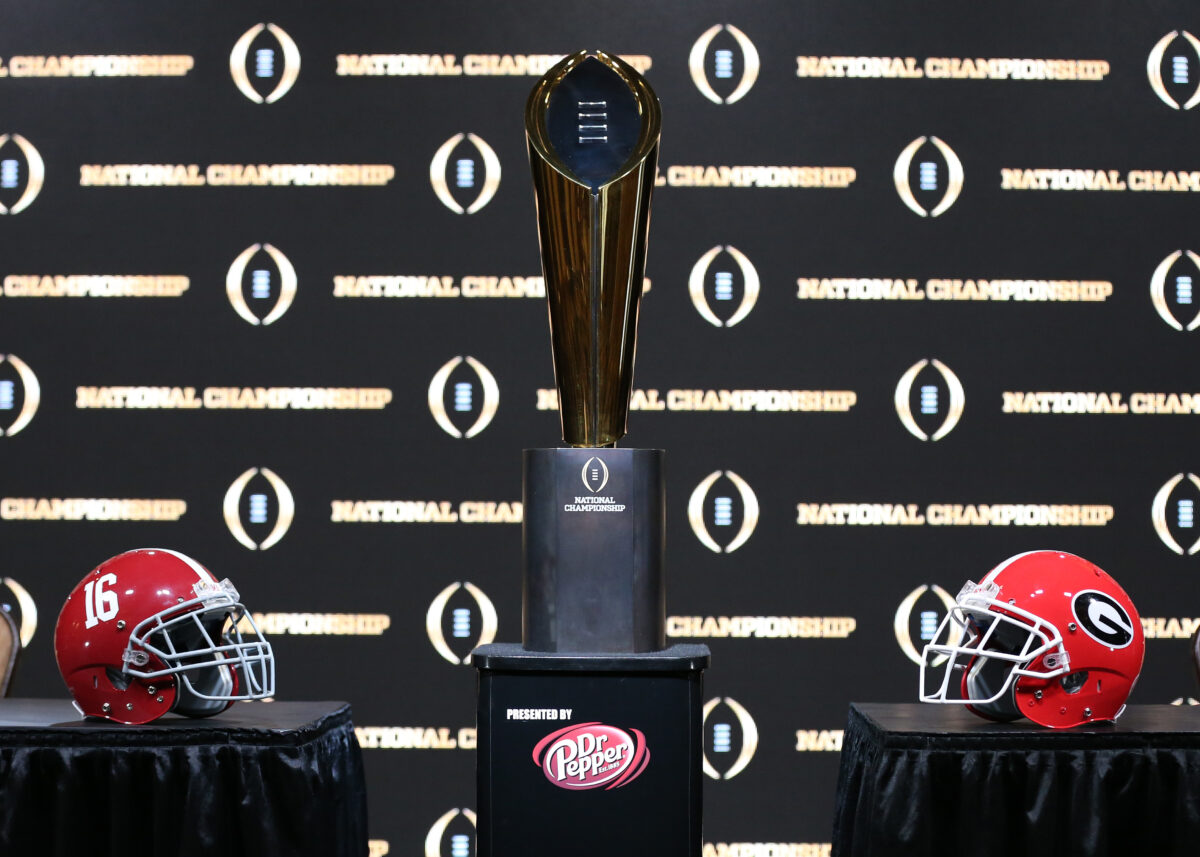 The 2021 college football season comes to a close tonight in Indianapolis as it’s a rematch of the SEC championship game between Alabama and Georgia.

Will the Tide roll again or will the Dawgs finally get over the hump?

Will it be another classic like when the two met to conclude the 2017 season?

Here is what the Fighting Irish Wire staff sees happening tonight in Indy:

An ongoing list of those departing and those entering… 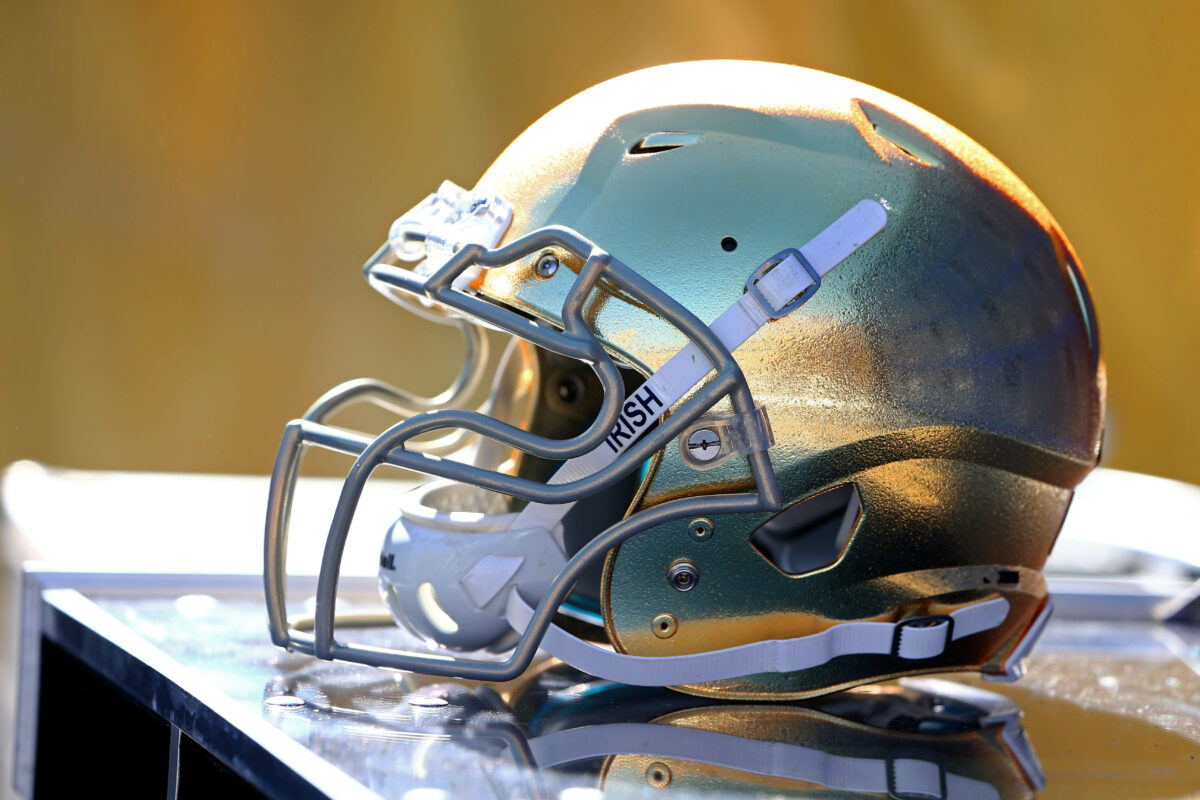 The transfer portal is sweeping college football and changing the landscape of the entire sport like few things have before.  Although Notre Dame hasn’t been hit with a major loss by any means this season, there is still plenty of an impact that can be felt as nine different players have entered the portal since the start of the football season.

We assume it’s only a matter of time before the Irish land a few commitments in it but as of now that is not yet the case.

Here are those nine and the latest on their future destinations:

Some good news in regards to the receiver position in 2022… 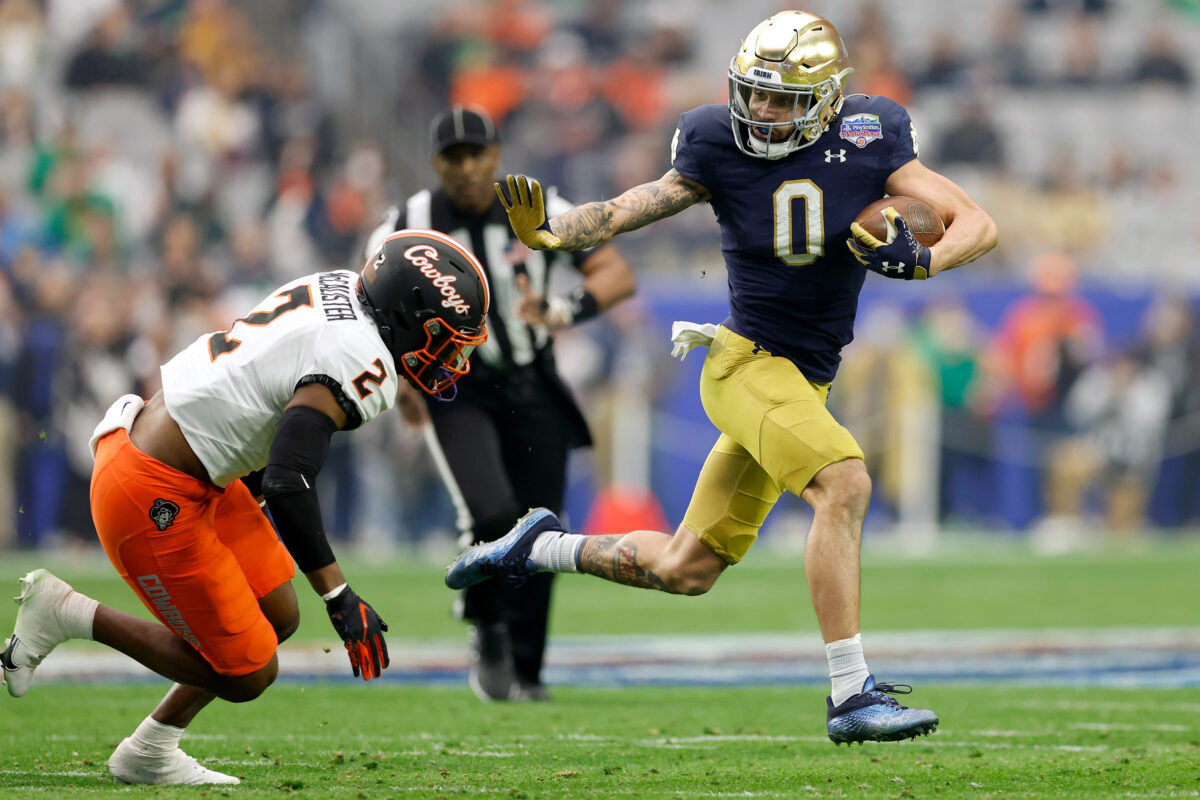 Notre Dame will have questions at wide receiver as the Irish turn their attention to preparing for the 2022 season but they did get good news for the position on Sunday night as Braden Lenzy went the way of Arnold Schwarzenegger in declaring his return next season.

I’ll Be Back ☘️ pic.twitter.com/bkHTuSpqeY

Lenzy burst onto the scene in 2019 with several explosive plays for Notre Dame before 2020 saw him battle a hamstring injury that severely limited his availability.  2021 saw Lenzy haul in 32 receptions for 350 yards and three touchdowns.

With Kevin Austin off to the NFL and significant struggles in recent years to recruit the position, Lenzy could very well see a bigger role in the offense in 2022.  His speed along with what Chris Tyree and Lorenzo Styles bring to the offense could bring big problems for opposing defenses.

Lenzy’s return answers some of the questions regarding Notre Dame at receiver in 2022 but Avery Davis’s decision still remains to be seen.  Regardless, I’d anticipate Marcus Freeman, Tommy Rees, and company to be looking for additions to the position by way of the transfer portal this off-season. 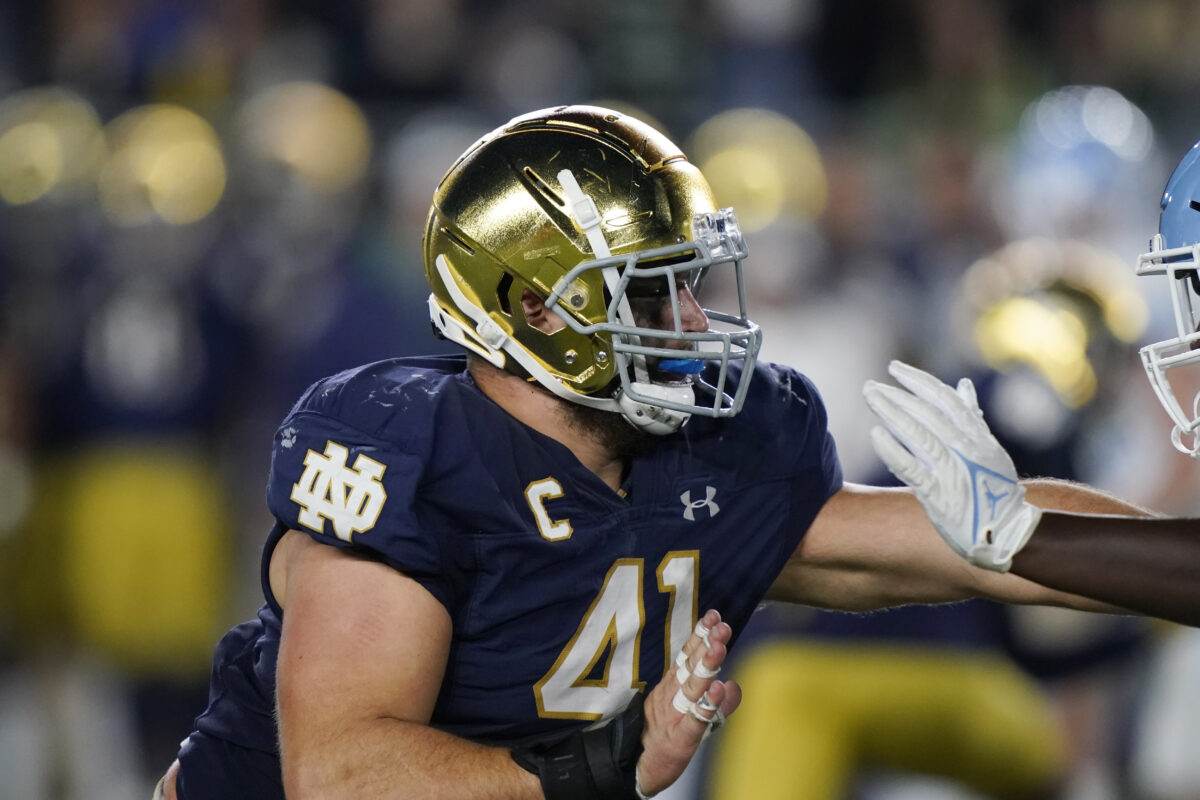 Veteran Notre Dame defensive lineman Kurt Hinish has been announced as headed to this year’s Hula Bowl in Orlando.

Relentless IDL with active punch & use of hands, quality burst, and good play speed. We look forward to seeing @NDFootball Kurt Hinish @Truk_sauce in the Bounce House in 2 weeks! @DraftDiamonds are found at the #HulaBowl @SAGECards @draftguyjimmy @scott_nfl @Marcus_Freeman1 pic.twitter.com/6xuvA6WlS6

Hinish finished his career having played more games in a Notre Dame uniform than any other player in program history.

The Hula Bowl has been traditionally been played in Hawaii as you would expect but was moved to Florida this season.  Last year’s game saw Notre Dame cornerback Nick McCloud intercept a pair of passes.

Hinish will suit up for the game on January 15.