Ben Roethlisberger is watching these young quarterbacks and likes what he sees. 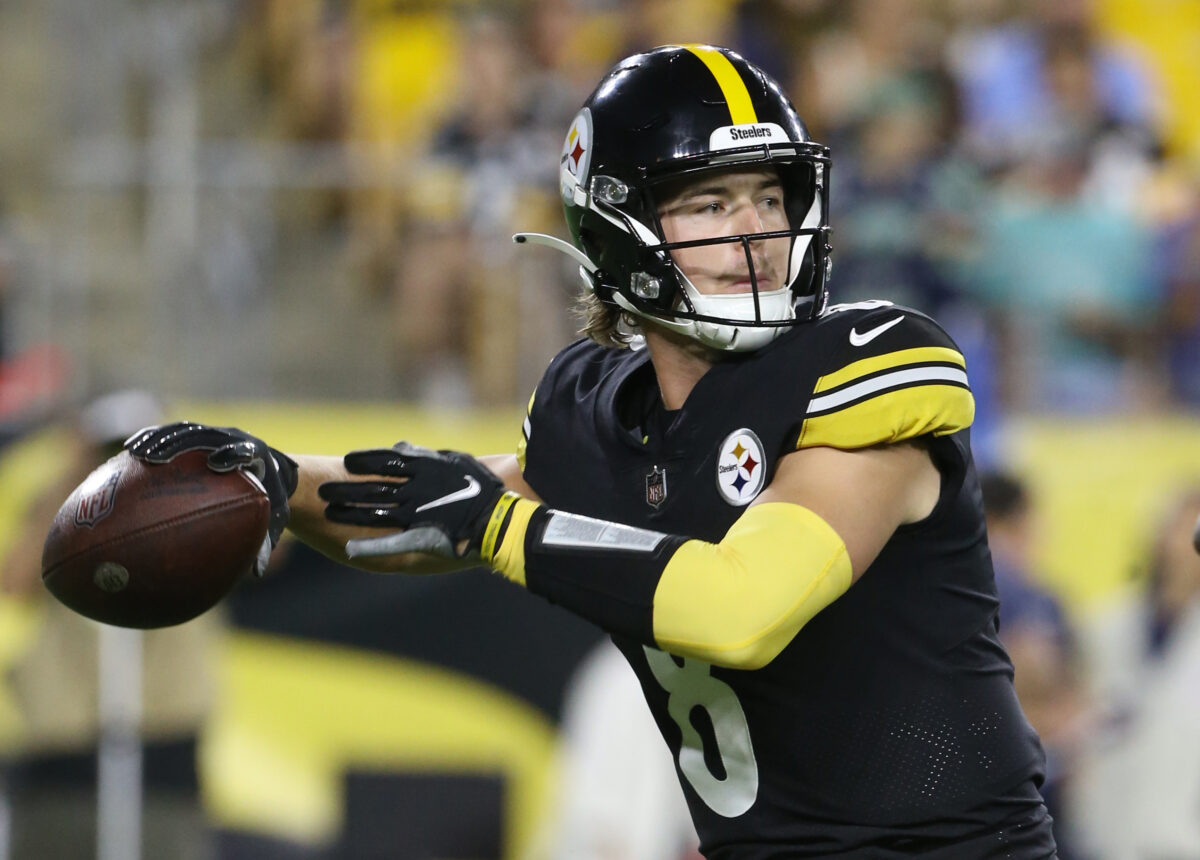 The Pittsburgh Steelers currently have three young quarterbacks battling it out to be the guy to replace a legend. That legend is Ben Roethlisberger, the greatest quarterback in franchise history. Roethlisberger took to Twitter after the Steelers first preseason game of the year and offered praise to the trio of quarterbacks looking to take over his job.

Pittsburgh signed Mitch Trubisky as a free agent shortly after Roethlisberger’s retirement. In addition the Steelers also kept veteran Mason Rudolph and drafted Kenny Pickett in the first round of the 2022 NFL draft.  All three played well versus the Seattle Seahawks on Saturday and it was great to see Big Ben was watching.

Roethlisberger spent 17 seasons with the Steelers, won Two Super Bowls and is a first-ballot Hall of Famer. Those are some big shoes to fill but all three guys on the roster are up to the challenge. 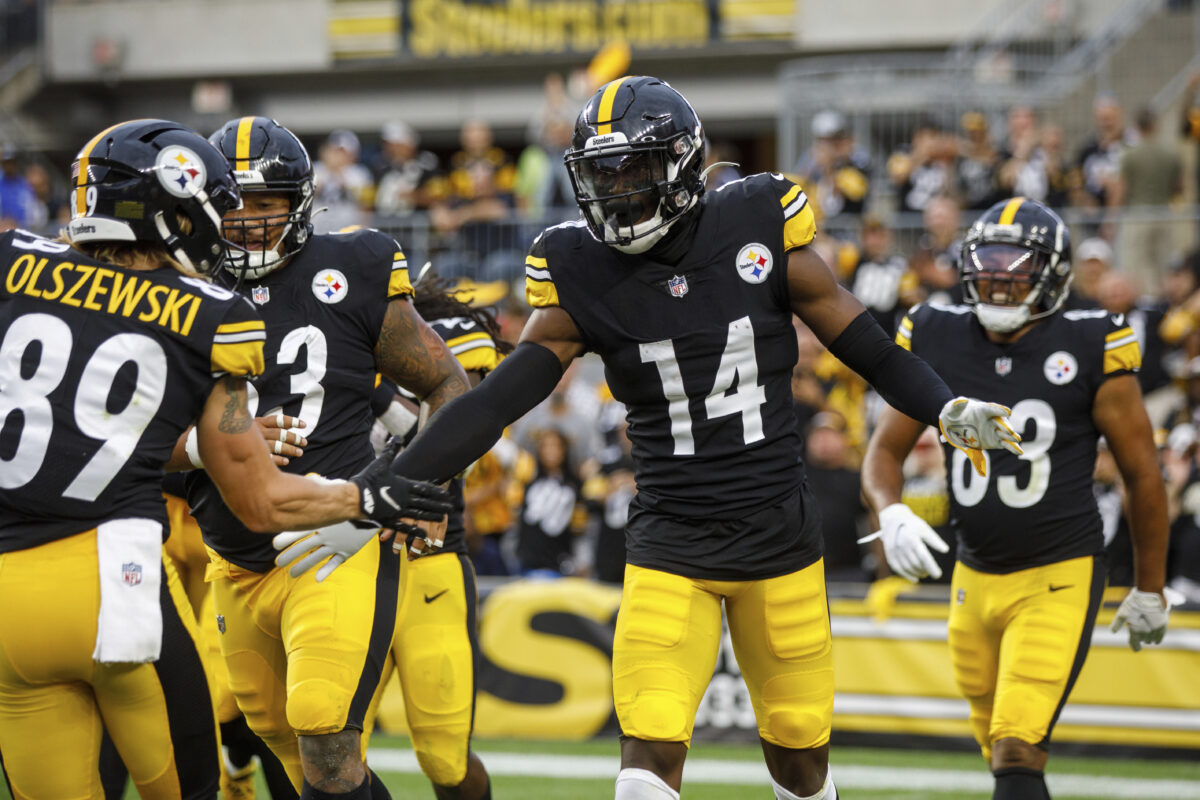 Last weekend, rookie wide receiver George Pickens put on a show for the rest of the NFL that the Pittsburgh Steelers already knew was coming. Pickens stellar effort earned him the highest grade of any of the 2022 rookie class by Pro Football Focus.

Pickens hauled in three catches for 43 yards and two of those catches really illustrated what sets him apart from the other receivers in this draft class. The first was a ridiculous touchdown catch in the corner of the end zone from Mason Rudolph. Pickens shielded the defender off of him, pulled in the catch and then drug his toes to be sure to secure the score.

Then Pickens opted for something a big more mundane for him. Pickens hauled in a little out route, full extension with a defender drapped all over him but thanks to his sticky toes and a spin, he secured the ball and stayed in bounds

Kenny Pickett more than held his own in his first NFL game. 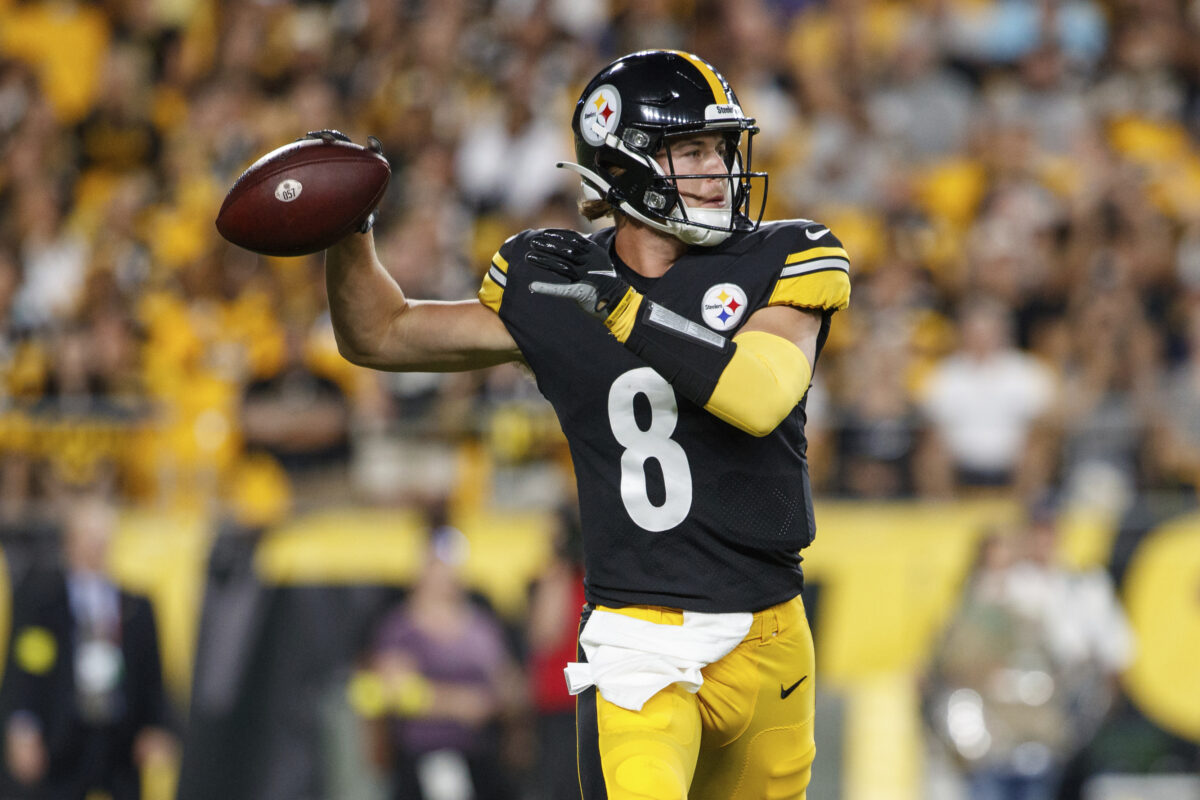 On Saturday night, the Pittsburgh Steelers got their first look at rookie quarterback Kenny Pickett. The Steelers beat the Seattle Seahawks in the team’s first preseason game on a game-winning touchdown pass by the team’s first-round pick.

Pickett was sharp and showed plenty of confidence on Satuday. Pickett was 13-for-15 passing for only 95 yards but did throw a pair of touchdown passes. Pickett also tucked the ball and ran it three times for 16 yards.

Here are all the best plays from Pickett’s first game as Steelers fans get their first look at the future of the franchise.

The Steelers have a very deep wide receiver room at this point. 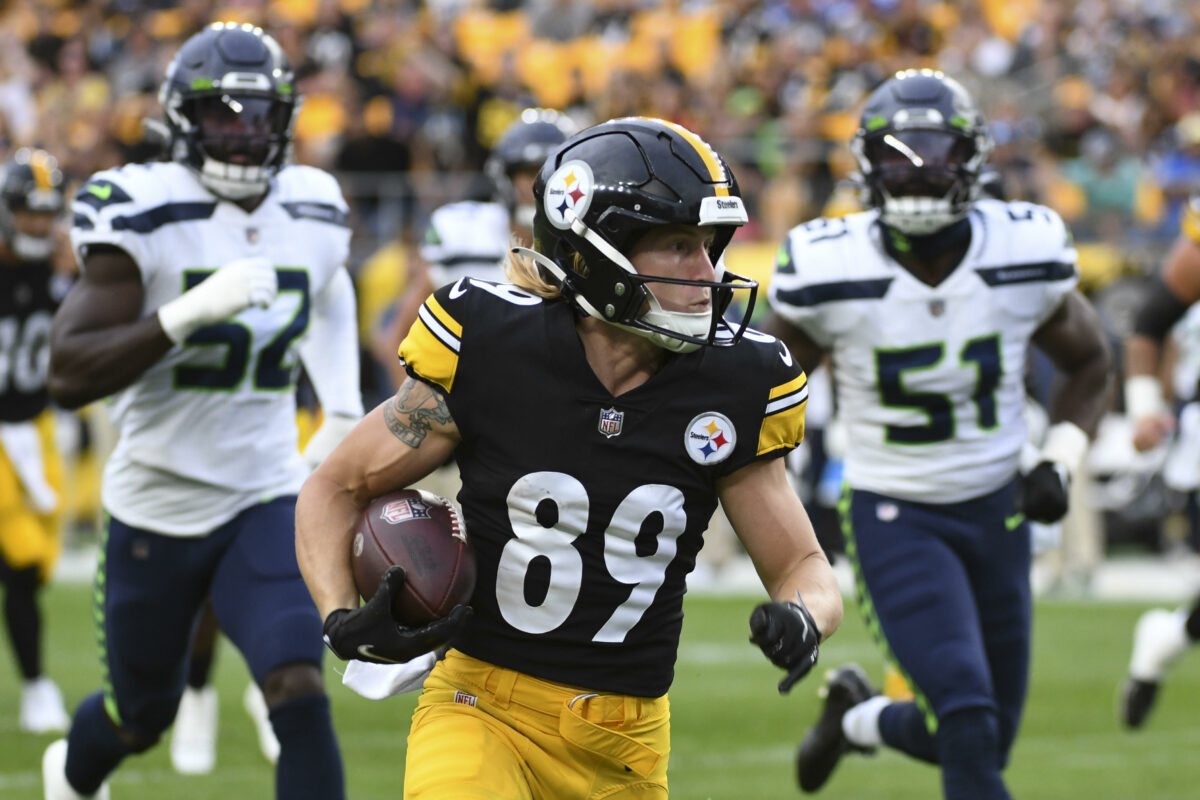 Traditionally, the Pittsburgh Steelers have kept five wide receivers on the final 53-man roster. But based on how things went in Saturday’s preseason win over the Seattle Seahawks, the team might need to reconsider this if things continue.

Pittsburgh has their top four receivers fairly locked in at this point. Diontae Johnson, Chase Claypool, George Pickens and Calvin Austin III are all in place and barring something health related, will make the team.

This is where things get a little more complicated. There are four guys who can make a strong case to be that fifth player.

First up we have Gunner Olszewski. Olszewski was signed to replace Ray-Ray McCloud as the team’s primary return man but he showed off his route running and receiving early in the game.

Anthony Miller, a guy many assumed would make the team, missed Saturday’s game after suffering a shoulder injury in Friday’s practice. Miller has experience with Mitch Trubisky but is no lock at this point.

There there are guys like Tyler Vaughns, Steven Sims and Miles Boykin. All three made some nice catches Saturday with Vaughns catching the game winner. Even Cody White got into the action and has experience in the offense.

After the first preseason game, here is what I would do with the wide receiver depth chart.

Ideally Pittsburgh could tuck Vaughns away on the practice squad and Miller ends up the odd man out. Let us know in the comments what your wide receiver depth chart looks like after the first preseason game.

The star rookie threw two touchdowns in a half of work to lead the Steelers to a win. 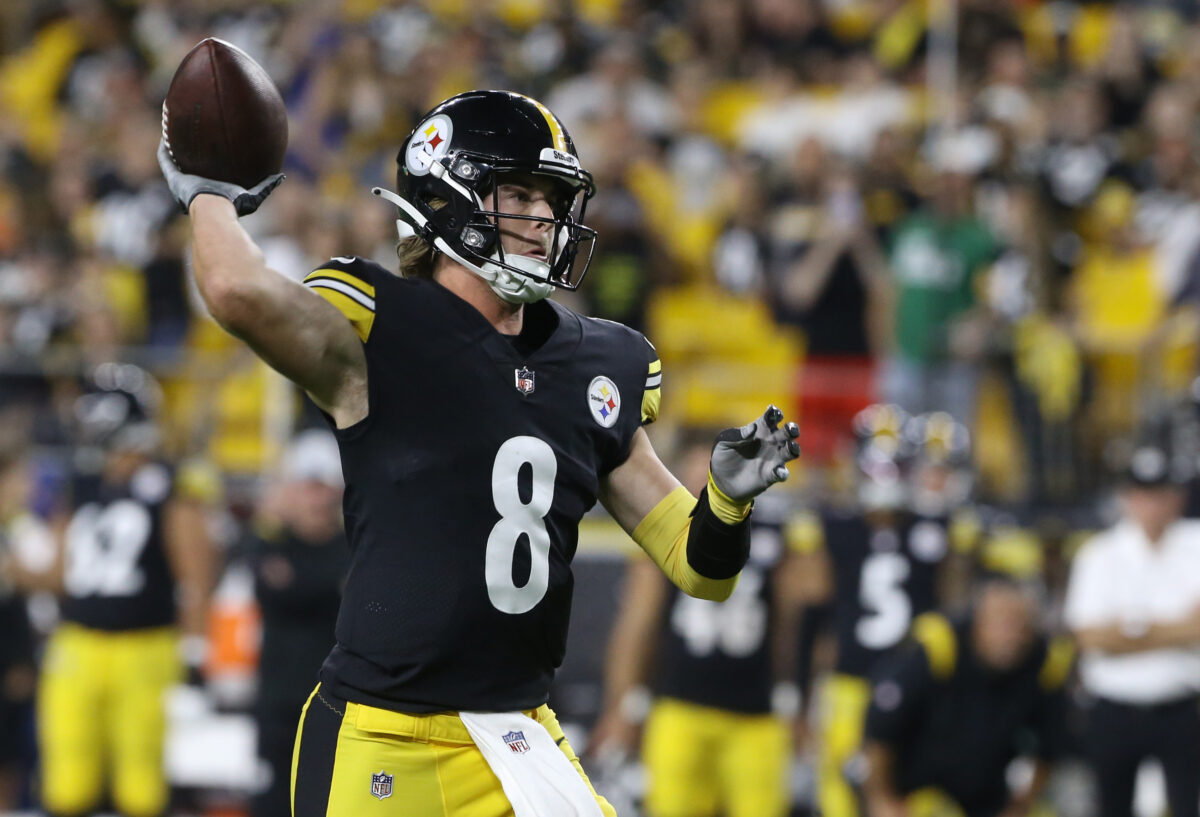 Pittsburgh Steelers rookie quarterback Kenny Pickett kicked off his career on Saturday night in preseason against the Seattle Seahawks. And you couldn’t have scripted a better ending for the first-round pick to kick off his legendary status with the team.

The Steelers beat the Seahawks 32-25 on a walk-off touchdown pass from Pickett to wide receiver Tyler Snead. But in fairness, all three Steelers quarterbacks were effective in putting points on the board. Pickett played the entire second half and finished with 95 yards on 13-of-15 passing and two passing touchdowns. Pickett also ran the football three times for 16 yards.

Next up the Steelers will take on the Jacksonville Jaguars and we expect to see a shift in the quarterback rotation to get Pickett some reps against better defenses and with better skill players.

The Steeelers are down three defensive backs in the first half. 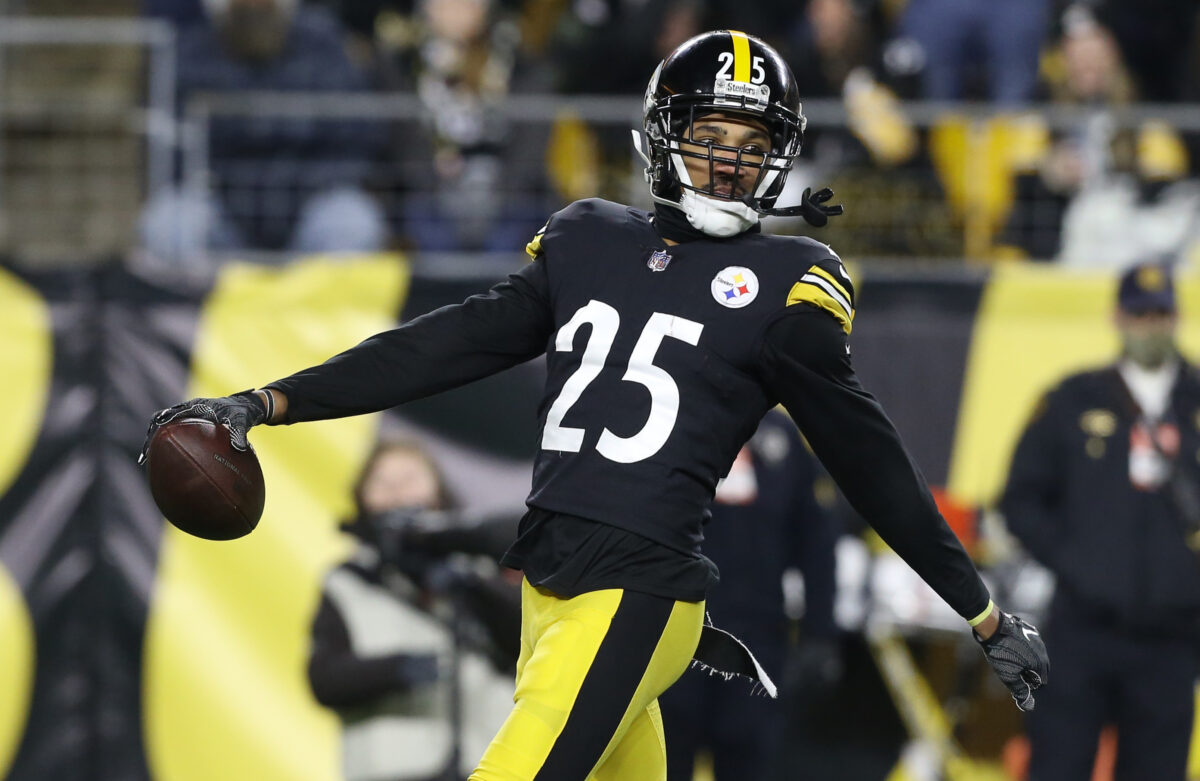 The injury bug bit the Pittsburgh Steelers secondary hard in the first half of their preseason showdown with the Seattle Seahawks. Through two quarters the Steelers are down three defensive backs with injuries.

First the Steelers saw reserve safety Karl Joseph go down with an ankle injury. Then starting cornerback Ahkello Witherspoon was shaken up on a big hit and looked to have some sort of shoulder injury. Then, at the end of the first half, another reserve safety, Damontae Kazee went off with an undetermined injury. This leaves the Steelers secondary pretty thin for the second half.

The Steelers lead the Seahawks 17-10 at halftime.

George Pickens is already impressing in his first preseason game. 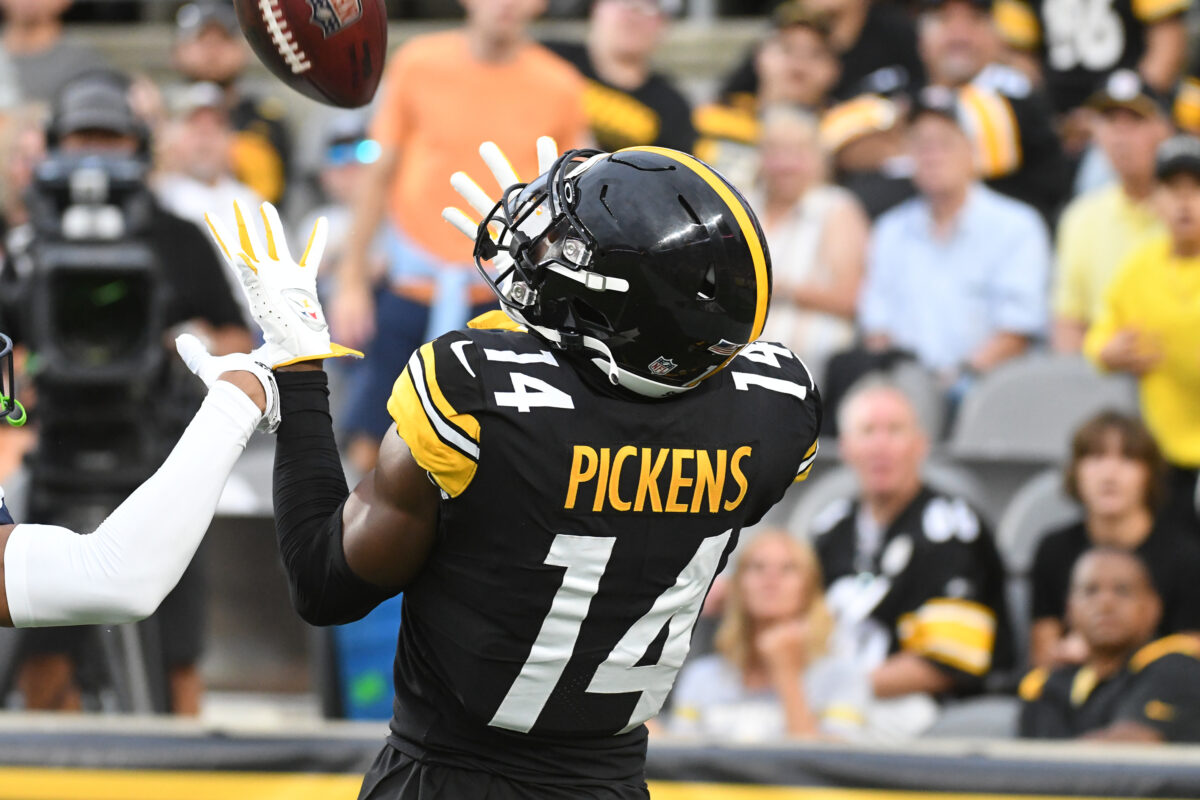 Ever since the start of training camp, all anyone has talked about is how great Pittsburgh Steelers rookie wide receiver George Pickens has been. It didn’t take long in his first preseason game to show it isn’t just practice.

Late in the first quarter the Steelers were set up with a short field and quarterback Mason Rudolph took advantage. Rudolph dropped in a perfect pass in the corner of the end zone that only Pickens could get to and Pickens showed his tremendous athleticism and body control bringing it down inbounds. The touchdown went for 26 yards and put the Steelers up 14-0 against the Seattle Seahawks in both team’s first preseason game.

How about this throw from @Rudolph2Mason too. 🔥

Mitch Trubisky looked sharp on his first drive with the Steelers. 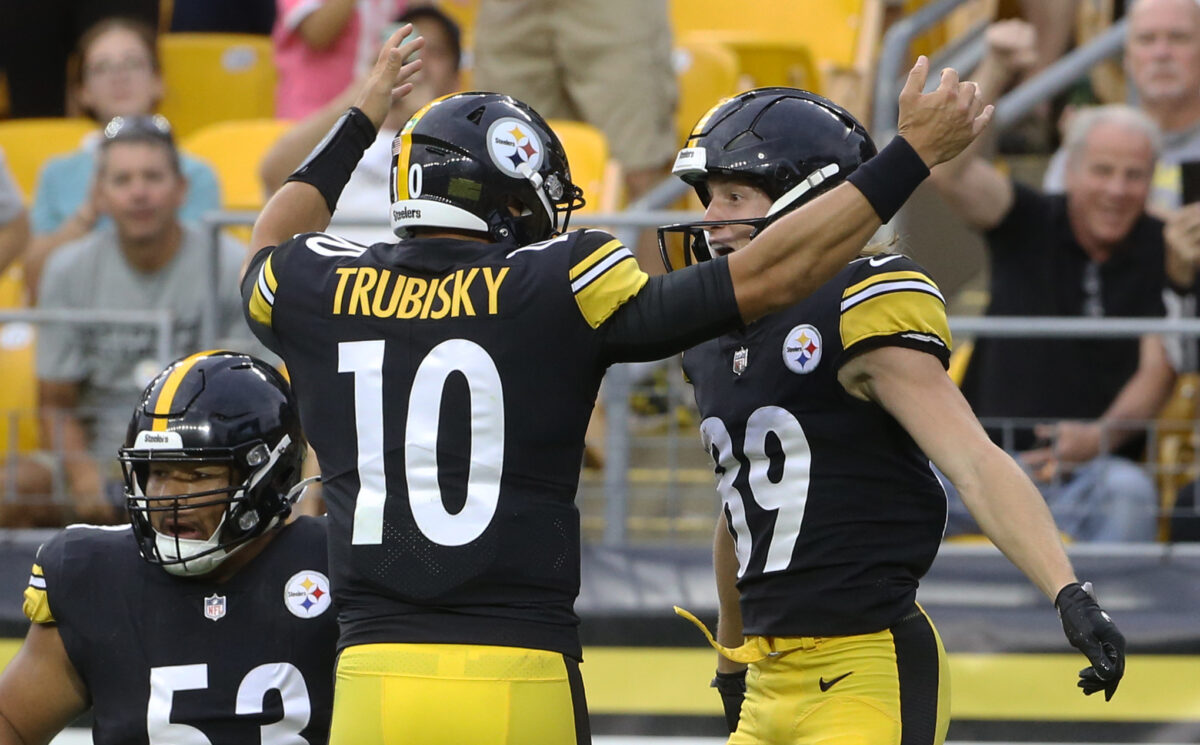 It didn’t long in preseason for new Pittsburgh Steelers quarterback Mitch Trubisky to impress. Trubisky came out of the gate quick, marching the Steelers down the field 90 yards on just seven plays, culminating with a great 13-yard touchdown pass to wide receiver Gunner Olszewski against the Seattle Seahawks.

Trubisky showed excellent command of the offense on the opening drive using his arm and his feet to push the Steelers down the field quickly. Trubisky’s night is over and he’s been replaced by Mason Rudolph in the lineup. Trubisky finished with 63 passing yards on 4-for-7 passing and the one passing touchdown.

New squad but @GunnerOlszewski is still a playmaker.

Here is how you make sure you don’t miss Steelers vs Seahawks. 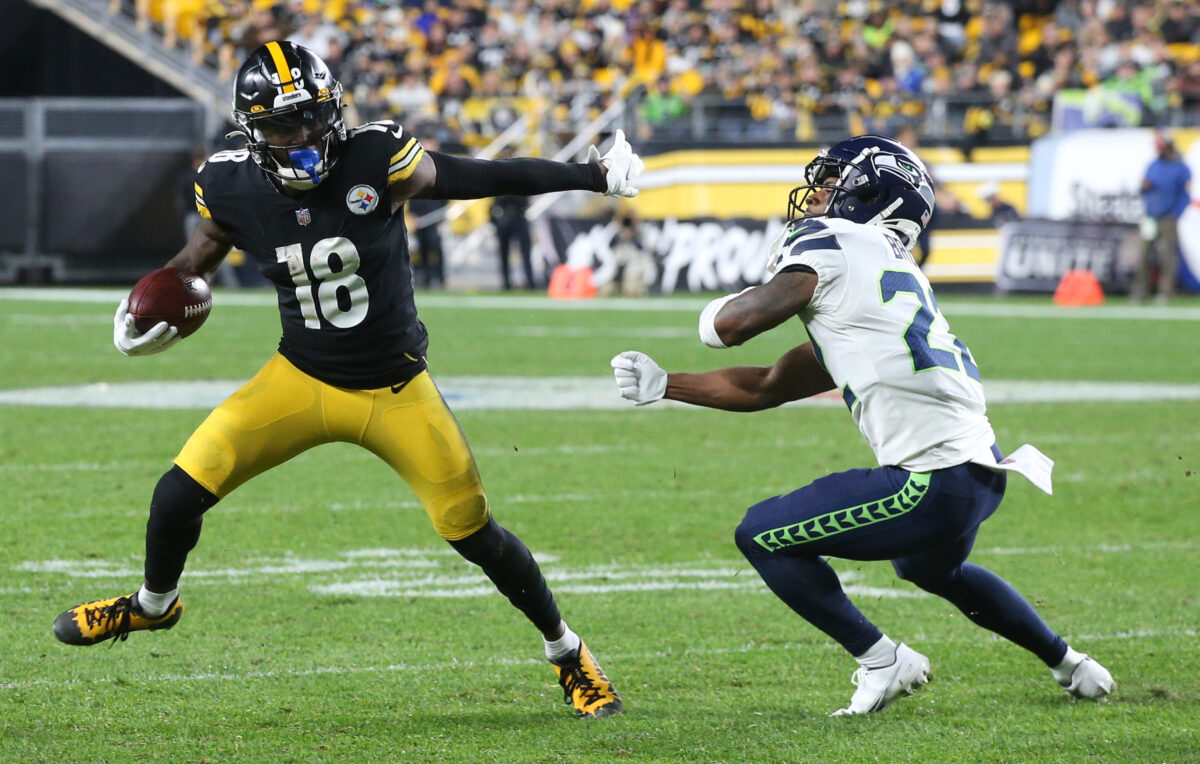 Here is everything you need to know so you can watch, listen to or stream this week’s Pittsburgh Steelers game. Welcome to the 2022 NFL preseason. The Steelers are welcoming the Seattle Seahawks to town and fans will get their first look at new starting quarterback Mitch Trubisky as well as first-round rookie Kenny Pickett.

Weather: Sunny with temps in the 70s

Announcers: Bob Pompeani and Charlie Batch on the local broadcast

Online: You can also tune in online with NFL NFL+ and FuboTV (try it for free).

You can also follow the game with us @TheSteelersWire and of course here on Steelers Wire with our live updates during the game, along with highlights of all the key moments from this week’s game. Join us straight after the final whistle for more in-depth coverage, injury updates, and analysis of all the action.

The Steelers are going to give the starters plenty of work on Saturday. 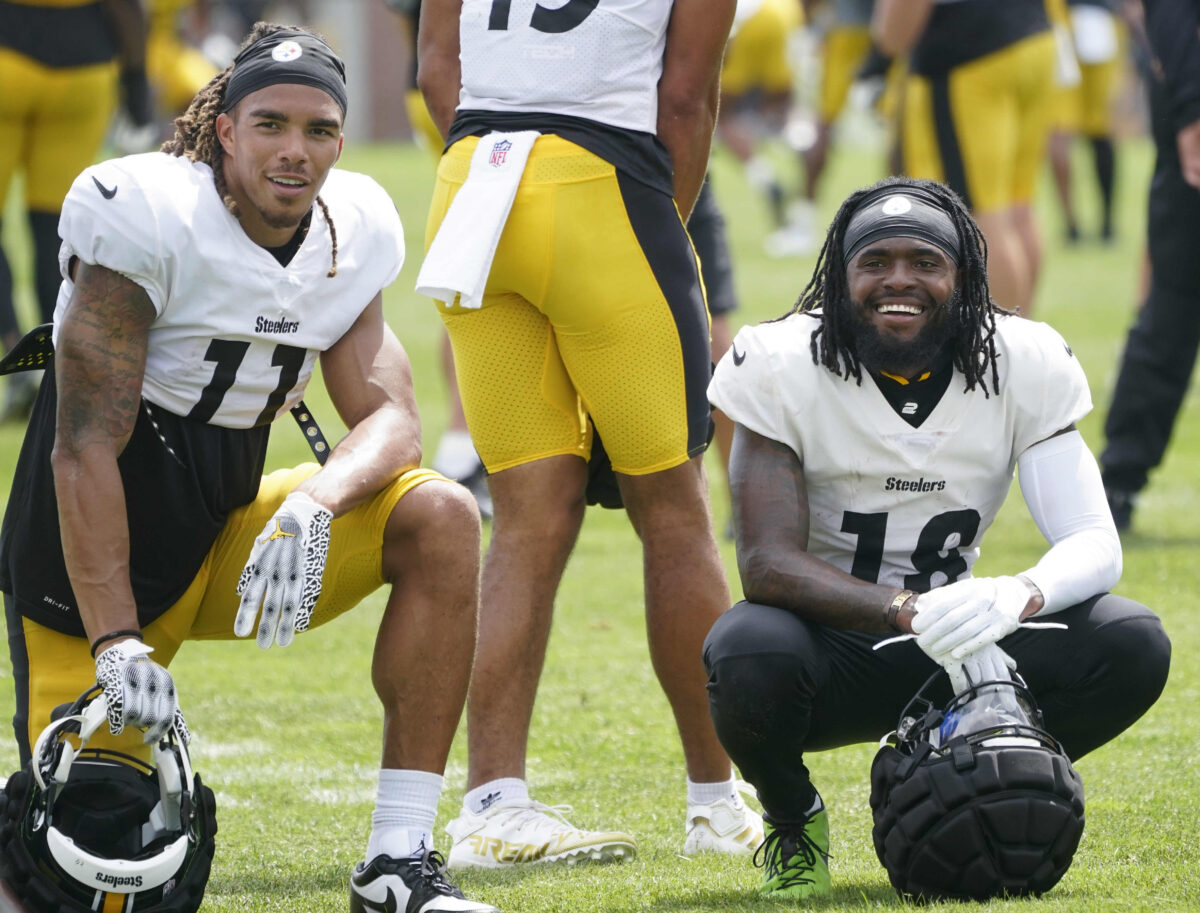 It is a whole new world for the Pittsburgh Steelers and the preseason. Traditionally, Steelers starters played very little in the first two preseason games and only sparingly in the third. But with such a young team at so many starting spots, head coach Mike Tomlin knows he has to change things up.

In his Thursday press conference, Tomlin announced that his starting quarterback for Saturday’s preseason game with the Seattle Seahawks would be Mitch Trubisky. Trubisky is also the projected starter for the regular season. Tomlin also noted the team would play three quarterbacks this week.

Tomlin also announced his starters would play around one quarter in this week’s game. Another departure for a Tomlin-led team. The Steelers are currently starting two new offensive linemen so it makes sense to get this group of five as many reps together as possible.

No word on some of the dinged up guys like running backs Najee Harris and Benny Snell but it could be a perfect opportunity to see what guys like Anthony McFarland and Jaylen Warren can do against a starting defense behind the starting offensive line.