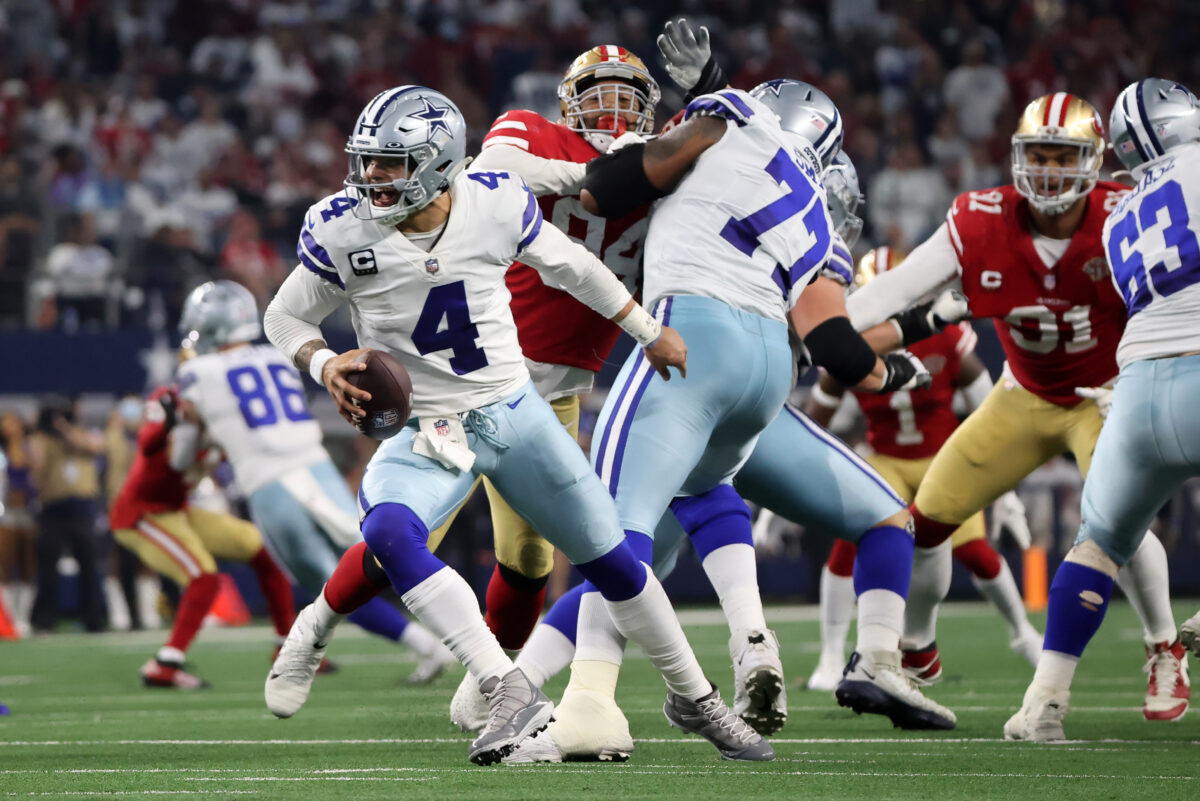 The San Francisco 49ers went into Texas and are leaving with a victory over the Dallas Cowboys.

In a game fraught with tension, the NFC West Wild Card team took down the NFC East champions.

Before San Francisco escaped with the 23-17 win on Sunday it had to survive a review that turned an apparent first down on a Deebo Samuel run into a fourth-and-inches with 1:04 left.

The wait seemed interminable before the clock started to run again and San Francisco let time run down to 38 seconds before calling a timeout.

Jimmy Garoppolo appeared to have the first down but a penalty flag was thrown on San Francisco for a false start, giving Dallas a last chance.

The Niners’ punt went into the end zone and Dallas took over at its 25 with 32 seconds left.

A hook-and-lateral picked up 15 yards and left 24 seconds.

A short pass to Tony Pollard advanced the ball to midfield. The running back got the first down and managed to get out of bounds.

Another completion to Dalton Schultz moved the ball to the SF 50 with 14 seconds left.

San Francisco had confusion and called its final timeout.

Dak Prescott ran the football after the timeout down to the 24 but stayed inbounds and the clock ran out.

Prescott had to give the ball to an official to mark it. He didn’t and the Cowboys’ season was finished in a bizarre way. 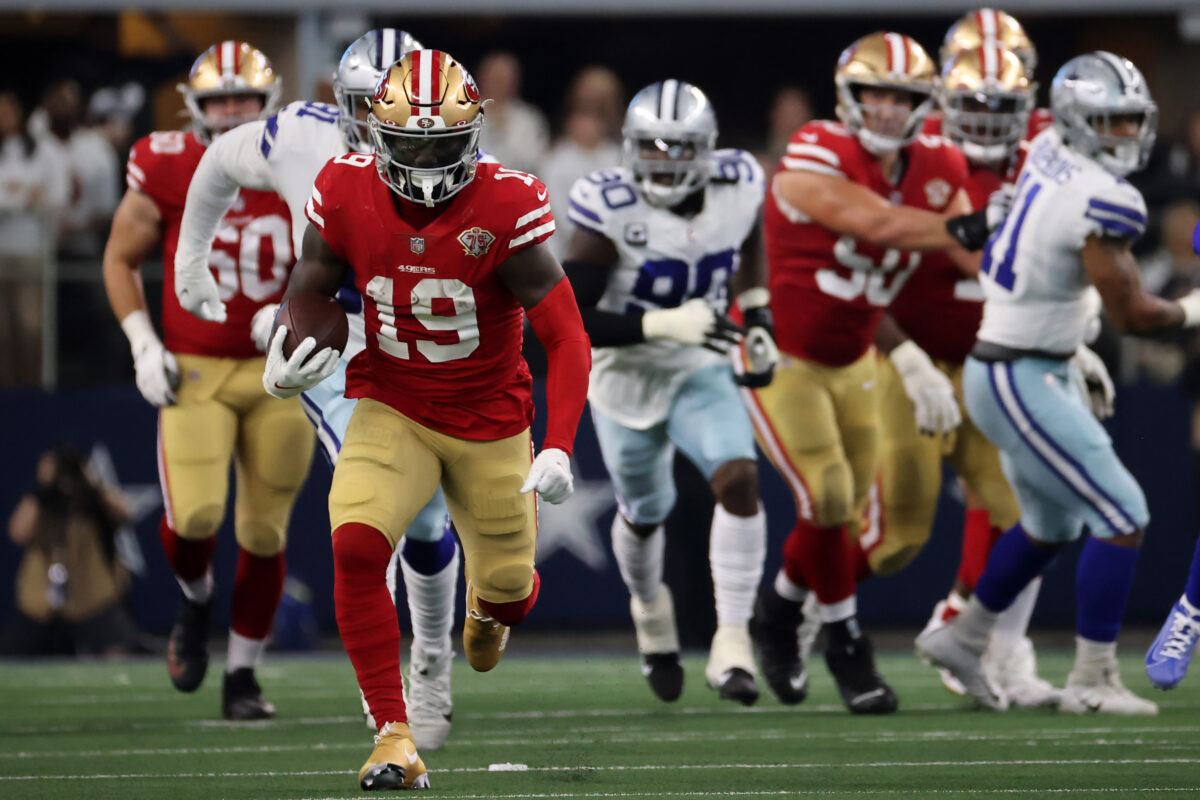 Deebo Samuel is a threat to catch, throw, or run with the ball for the San Francisco 49ers.

The multi-purpose blossoming star taught the Dallas Cowboys how dangerous he can be on Sunday in an NFC Super Wild Card playoff game.

Watch as Samuel somehow finds open space and navigates his way to the end zone on a 26-yard TD run in the third quarter.

How did Deebo even find this hole? 😱 @19problemz#SuperWildCard | #FTTB 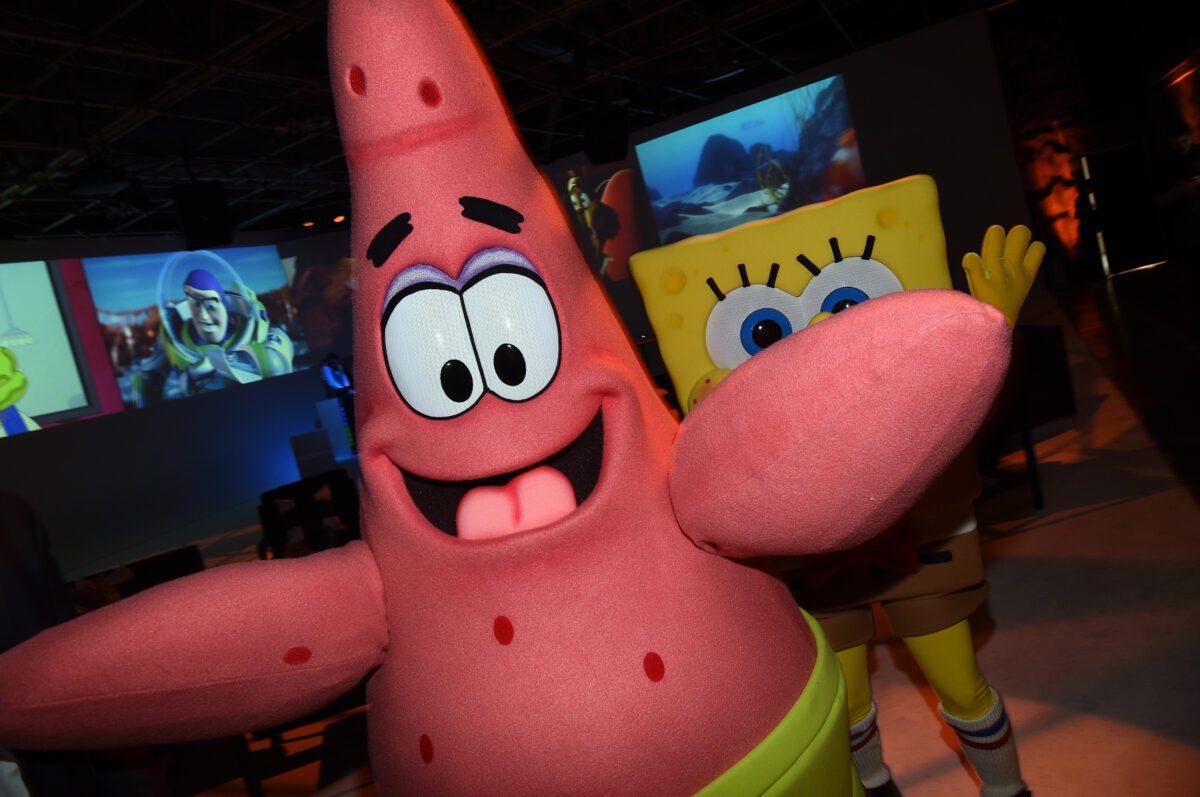 The much-anticipated matchup between the San Francisco 49ers and Dallas Cowboys Sunday saw the NFC West Wild Card team blast out of the gate in Texas.

The Niners went 75 yards in 7 plays, eating up more than 4 minutes before finding the end zone.

Jimmy Garoppolo was 3-for-3 for 43 yards and running back Elijah Mitchell had a couple carries, including a 4-yard run for the score.

The first sliming of the day…@EliMitch15 enters the SLIME ZONE! #FTTB

And the Nickelodeon broadcast put a different kind of star between the uprights for the PAT: Patrick Star.

Yes, that is Patrick Star between the uprights. 😀

The Niners added a field goal by Robbie Gould, who is now 16-for-16 in his postseason career, to open the lead to 10-0.

Spongebob was skeptical at first… 😂

40 years ago Dwight Clark made ‘The Catch’ for the 49ers 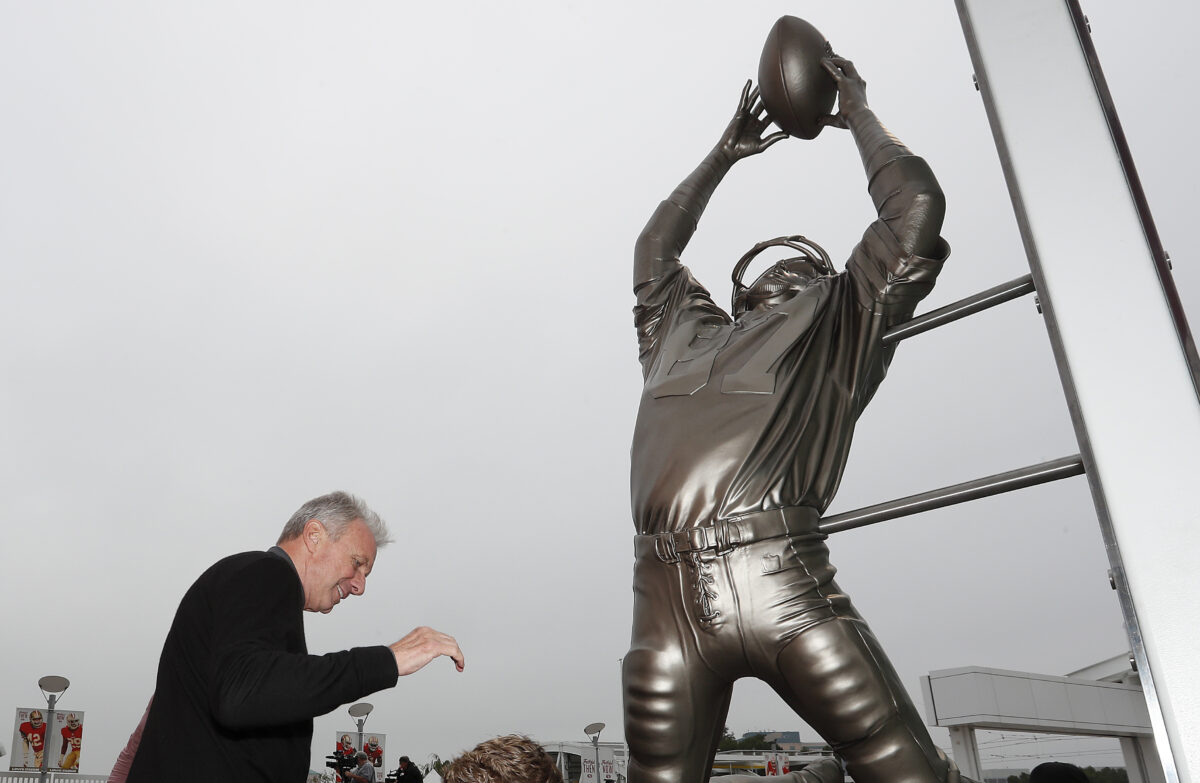 The Catch and Ray Wersching’s ensuing PAT gave the 49ers a 28-27 victory over the Dallas Cowboys.

The game was broadcast on CBS and the call was made by the great Vin Scully.

Coincidentally, 40-plus years later, the same teams will play on CBS this Sunday in an NFC Wild-Card Game.

Clark was not the intended receiver on the play call. It was supposed to be a pass to Freddie Solomon, who scored on the play earlier in the game.

The Cowboys had Solomon covered. So, Montana had to improvise.

Just before being chased out of bounds, and after a pump-fake caused the 6-foot 9-inch Ed “Too Tall” Jones to leave his feet, Montana threw a high pass to the back of the end zone that seemed to be heading out of bounds until Clark, closely covered by Cowboys defender Everson Walls, made a leaping catch with his fingertips in the back right corner of the end zone to tie the game with 51 seconds left.

The Cowboys did have a last chance for victory. With the ball in 49ers territory after a long pass to Drew Pearson, Danny White was sacked by Lawrence Pillers and fumbled.

Jim Stuckey recovered for the 49ers and the rest is history.

Ambry Thomas’ pick puts the the Niners in the playoffs 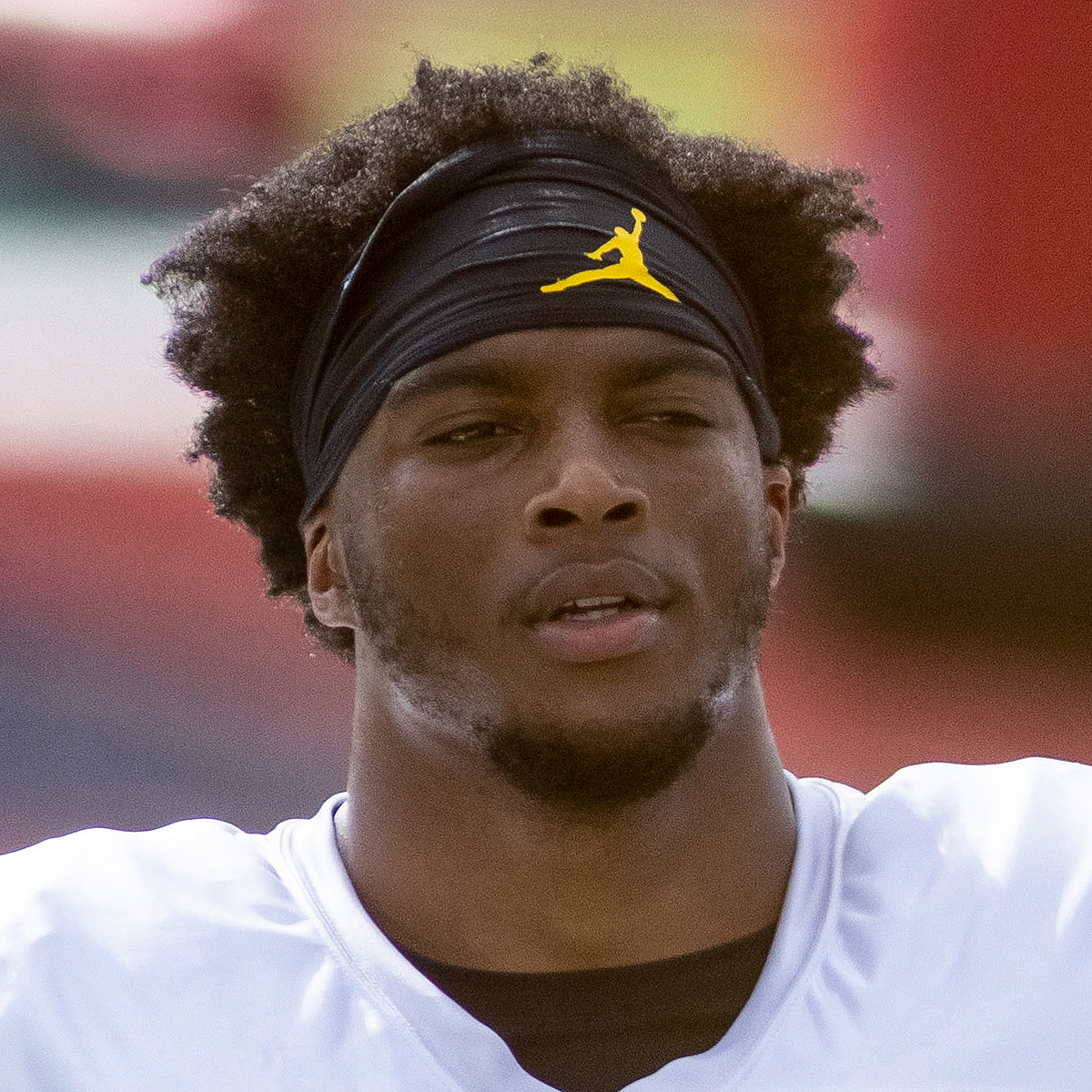 The San Francisco 49ers have earned a playoff spot in the NFC. And they had to work overtime to get it.

The Niners trailed 17-0 before rallying to take a 27-24 lead in the extra period Sunday at SoFi Stadium on a Robbie Gould field goal.

The Los Angeles Rams, who won the NFC West by virtue of the Arizona Cardinals’ loss to Seattle, had a chance to tie the game with a field goal or win it with a touchdown.

Matthew Stafford looked for Odell Beckham Jr. deep down the sidelines but the pass was underthrown and DB Ambry Thomas make a great interception to end the game.

The San Francisco 49ers will be on the road for an NFC Wild-Card game against the Dallas Cowboys.

Deebo Samuel is doing it all for the San Francisco 49ers 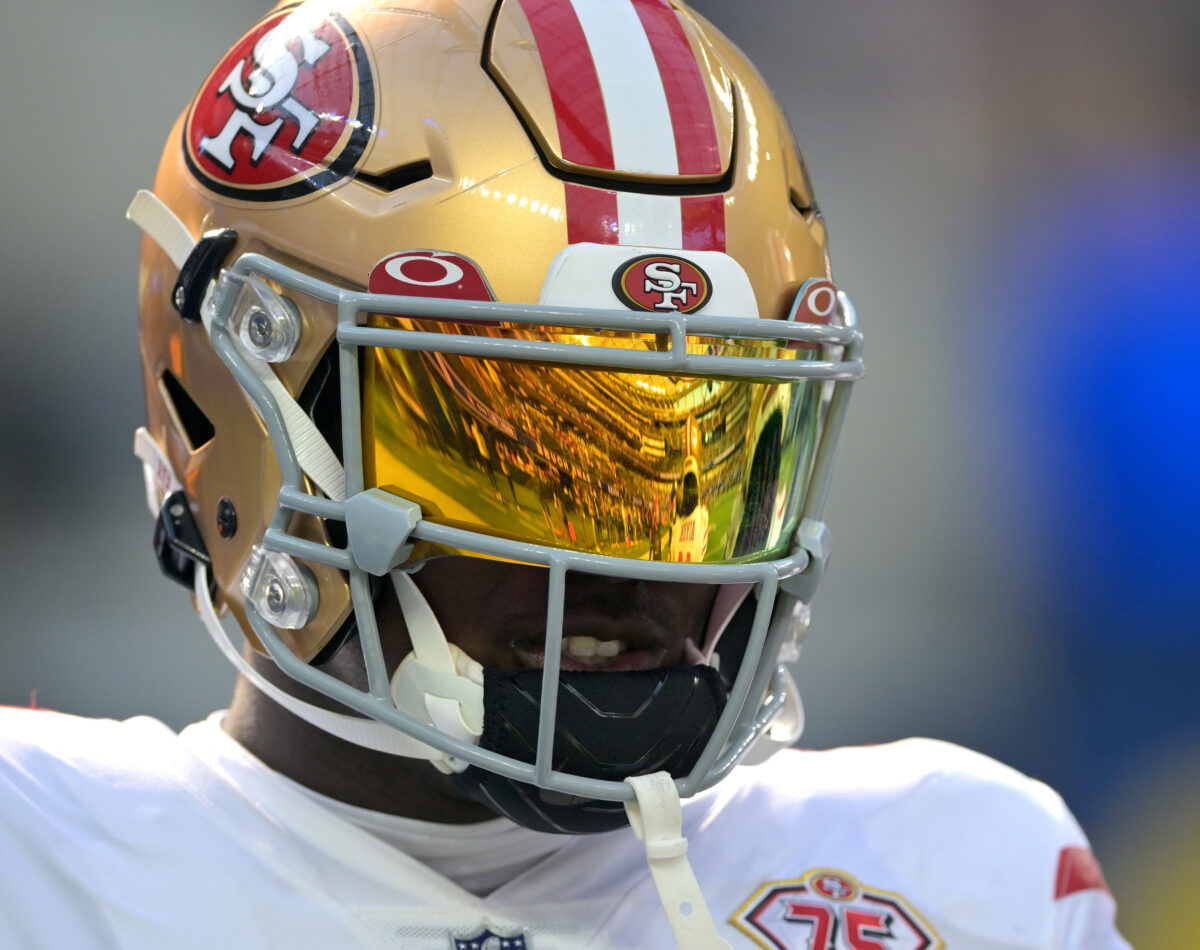 The San Francisco 49ers have rallied against the Los Angeles Rams on Sunday at SoFi Stadium.

Once trailing 17-0, the 49ers found magic in the hands and legs of Deebo Samuel.

The all-purpose star scored on a touchdown run in the third quarter to bring San Francisco within 17-10.

Deebo in the backfield is dangerous 🔥 @19problemz@49ers pull within seven! #FTTB

Later in the quarter, Kyle Shanahan went to the bag of tricks and had Samuel throw a pass.

All Samuel did was unload a beauty to Jauan Johnson and suddenly a 17-point deficit had become a tie game.

We’ve got a tie game in LA folks. #FTTB 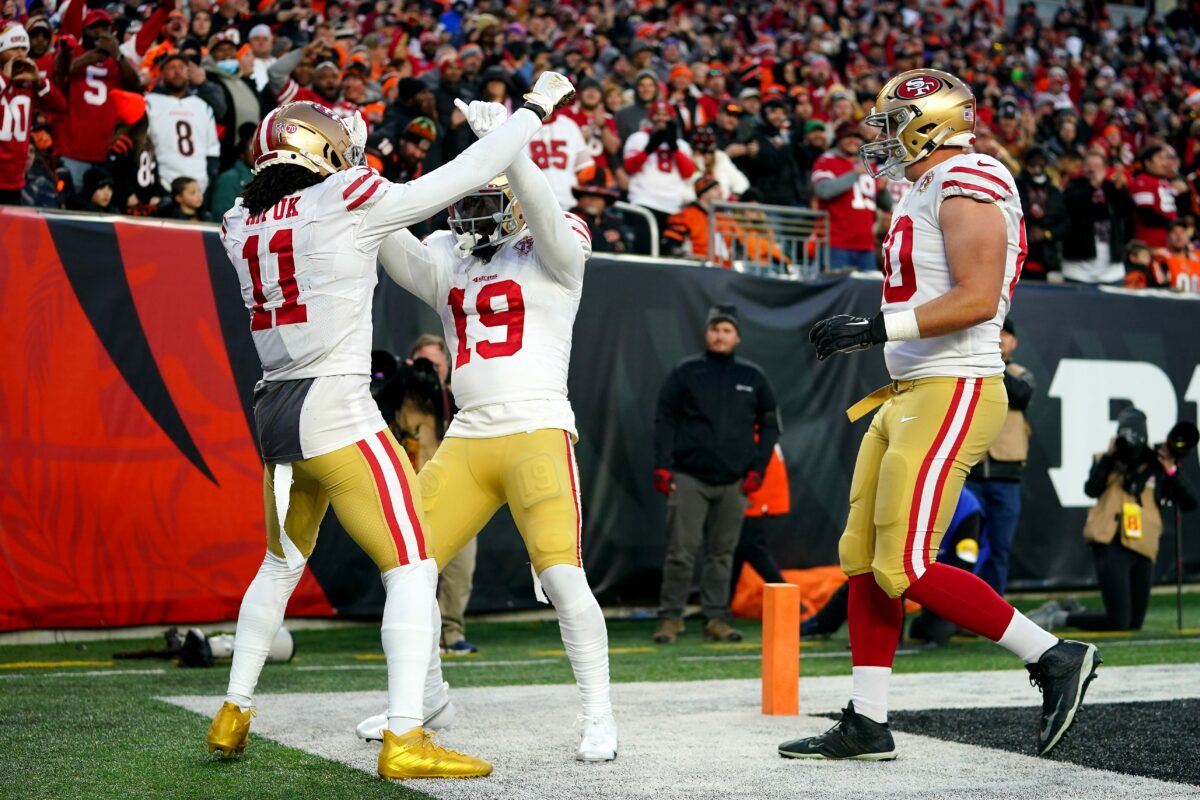 The San Francisco 49ers saw a 14-point lead evaporate in the fourth quarter. They were trailing the Cincinnati Bengals by three in overtime after the first drive.

Would this be a crushing defeat or would Jimmy Garoppolo & Co. save the day?

Garoppolo drove the Niners down the field and hit Brandon Aiyuk with a short pass.

Aiyuk headed for the end zone and the official ruled he had gone out of bounds short of six points.

However, the play was reviewed and it was determined Aiyuk had in fact reached the end zone and the 49ers had a 26-23 victory over Cincinnati.

So, do you think he was in the end zone or was the official correct in his initial ruling? 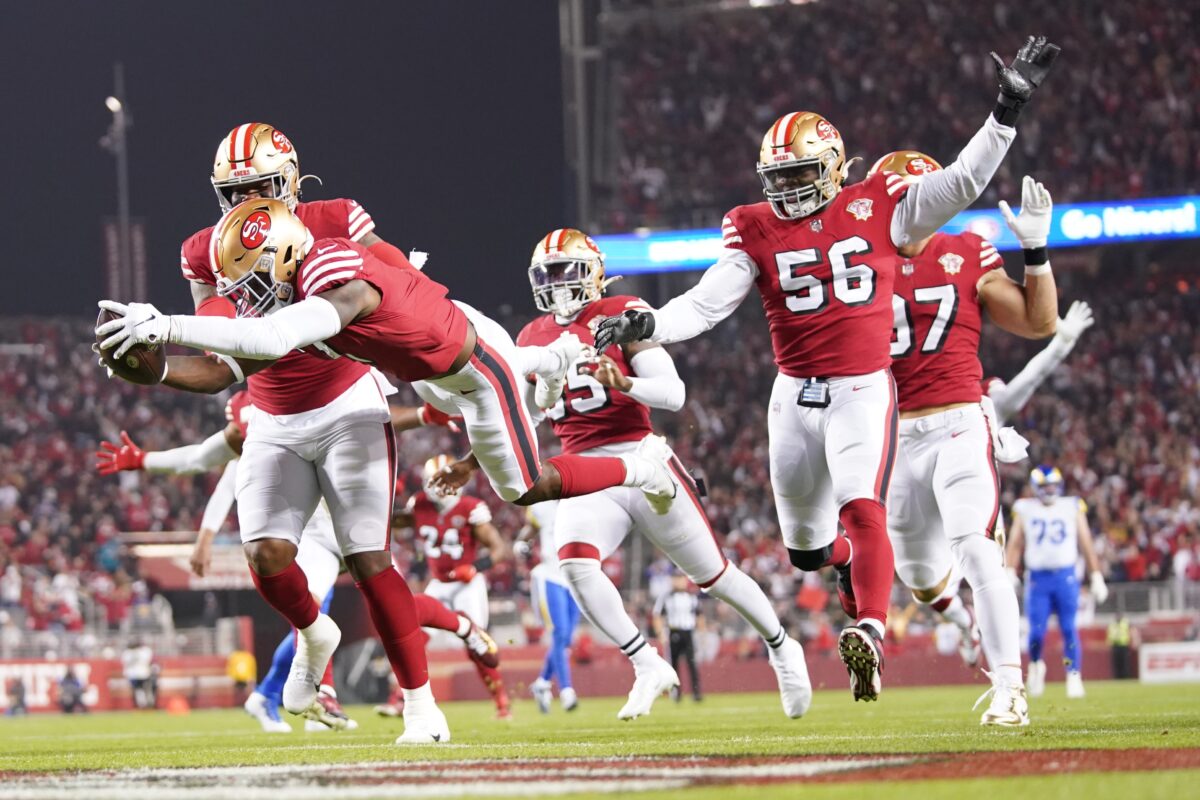 Matthew Stafford must think this is a distant replay.

A week and a day after the Los Angeles Rams’ quarterback was picked twice by the Tennessee Titans, he had the same thing happen against the San Francisco 49ers on Monday Night Football.

The first pick occurred due to a communication mishap with newly acquired Odell Beckham Jr.

The second saw Jimmie Ward come away with the ball after tight end Tyler Higbee bobbled it.

Ward caught the carom and returned it 27 yards for a touchdown. 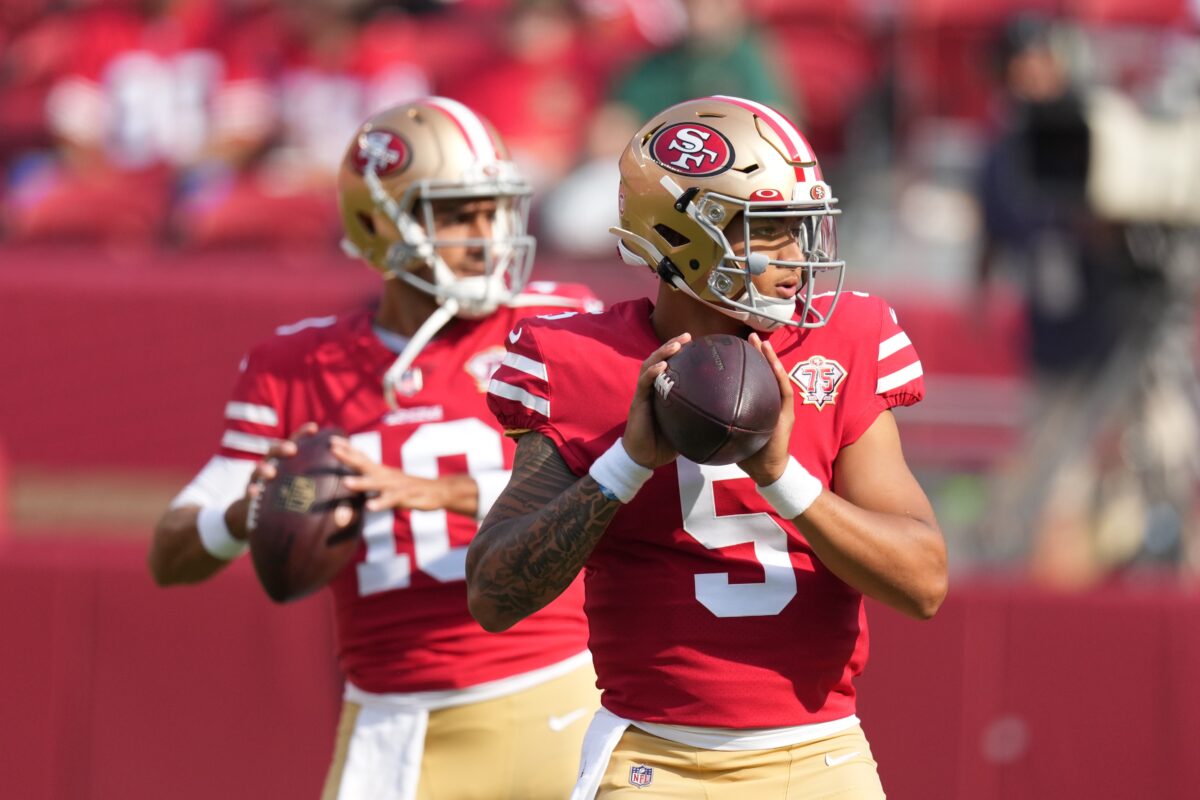 The San Francisco 49ers on Friday revealed Jimmy Garoppolo will be unable to go against the Arizona Cardinals on Sunday due to a calf injury.

The means the Niners are handing the offense over to the third overall pick in the 2021 NFL draft from North Dakota State as they play in the desert.

Lance took over in the second half of the Week 4 loss to the Seattle Seahawks after Garoppolo suffered the injury.

Lance has played in 3 games, completing 10-of-18 passes. He has thrown 3 TD passes and rushed for a score.

Lance could be without a huge weapon. tight end George Kittle is listed as doubtful for the NFC West clash with the undefeated Cardinals.

The 49ers are 2-2 in the highly competitive NFC West, regarded as the best division in the league. 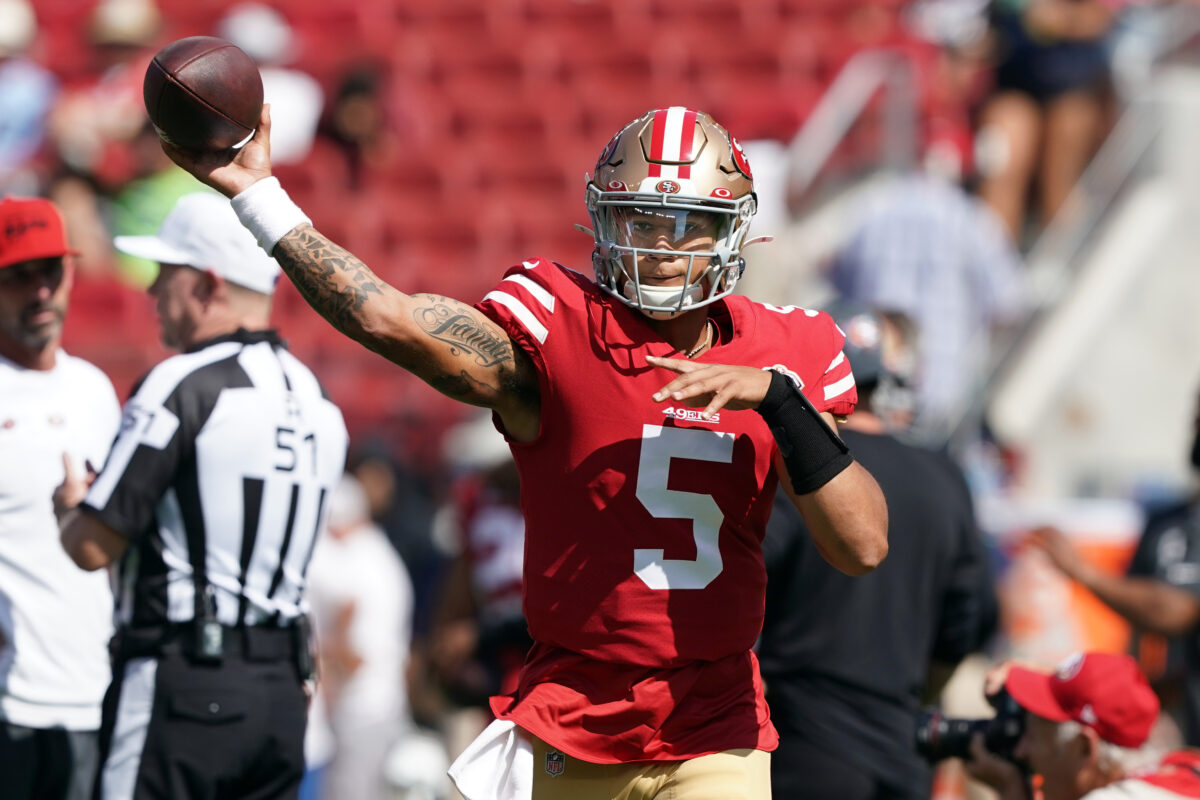 Jimmy Garoppolo went down with yet another injury and the San Francisco 49ers had to turn to rookie Trey Lance.

Kyle Shanahan had to like what he saw on this play late in the third quarter.

Lance found Deebo Samuel standing all alone on the sidelines and the wideout did the rest.

The play covered 76 yards and brought San Francisco within 8 points of the Seattle Seahawks.

The PAT was no good. Regular kicker Robbie Gould could not go today and Mitch Wishnowsky was off on the extra point.

Trey Lance finds him for the 76-yard TD! #FTTB