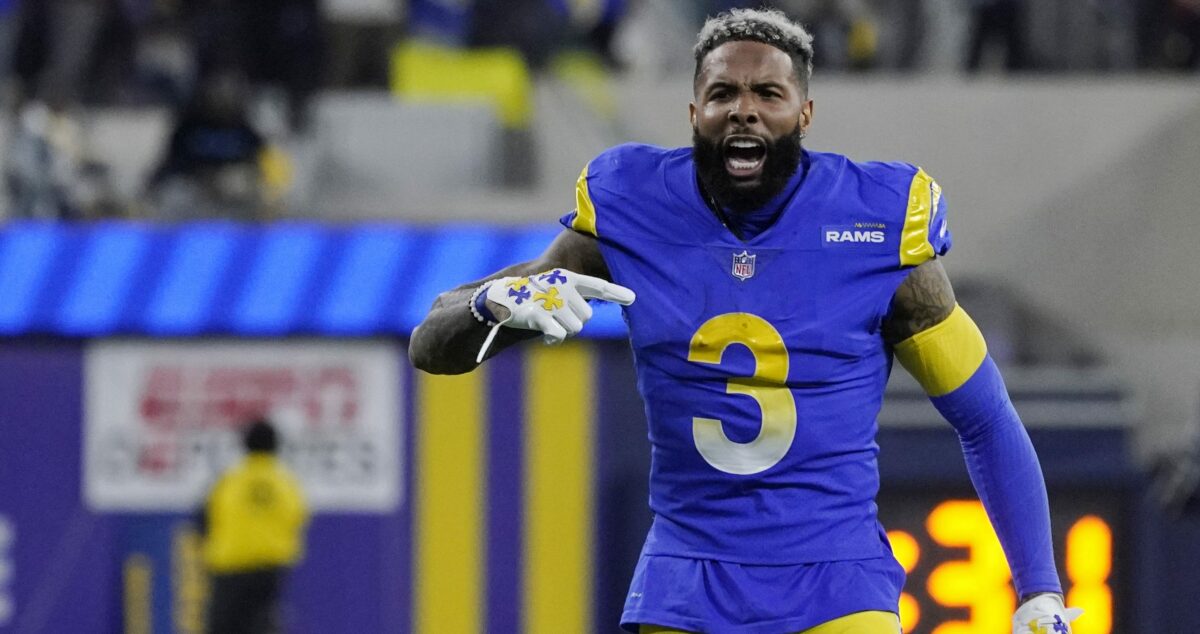 If any Carolina Panthers fans were watching Monday night’s playoff clash between the Los Angeles Rams and the Arizona Cardinals, then they might’ve experienced a bit of déjà vu.

In the third quarter of the wild-card round matchup, the Rams dialed up a deep ball for Beckham . . . except Beckham wasn’t the one catching it. He was, instead, the one throwing it into the waiting arms of running back Cam Akers.

Now, how is this relevant to Panthers fans again? Well, it was the same exact play Beckham torched Carolina on back when he was with the New York Giants in 2018. And by “same exact play,” we mean it.

🔥🏈 Odell Beckham with the TD pass to Saquon Barkley

The only difference is, Beckham’s 2018 completion went for a 57-yard touchdown to (another running back) Saquon Barkley. Luckily for the Panthers, however, it was them—off the strength of Graham Gano’s 63-yard field goal as time expired—who came away with the last laugh in a 33-31 win.

Oh, and in case you doubted that aforementioned “same exact play” stuff, our buddy John Ellis has you covered:

In another twist, this tomfoolery was likely devised by Rams offensive coordinator Kevin O’Connell, who Matt Rhule has reportedly targeted in his search for a new play-caller. Beckham, O’Connell and the rest of their crew eventually stomped away with a 34-11 victory over Arizona, moving on to face the Tampa Bay Buccaneers in the divisional round this upcoming weekend. 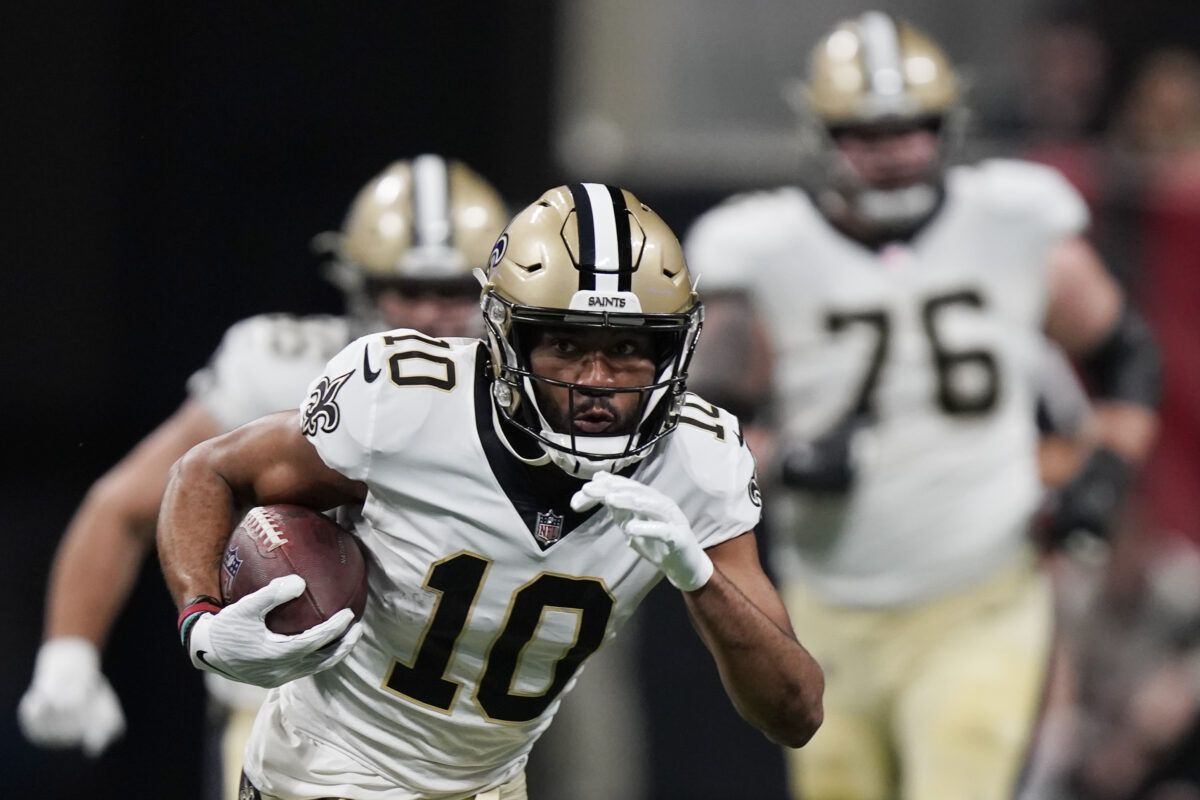 New Orleans Saints backup quarterback Trevor Siemian stepped in for an injured Taysom Hill, throwing a touchdown pass to Tre’Quan Smith to extend the team’s lead over the Atlanta Falcons in Week 18. It was an impressive sequence from the veteran backup, who only had a moment’s notice to warm up before going into the game.

The injury to Hill is unclear. He left for the locker room without his left shoe; that could be related to the partially torn plantar fascia he’s dealt with in his right foot most of the season, but we won’t know until the team shares more information. It’s also possible that he suffered a concussion going down during his last rushing attempt. He missed almost a month with a concussion earlier this season. Still, it’s just speculation at this point. Check this space for updates on his game status. 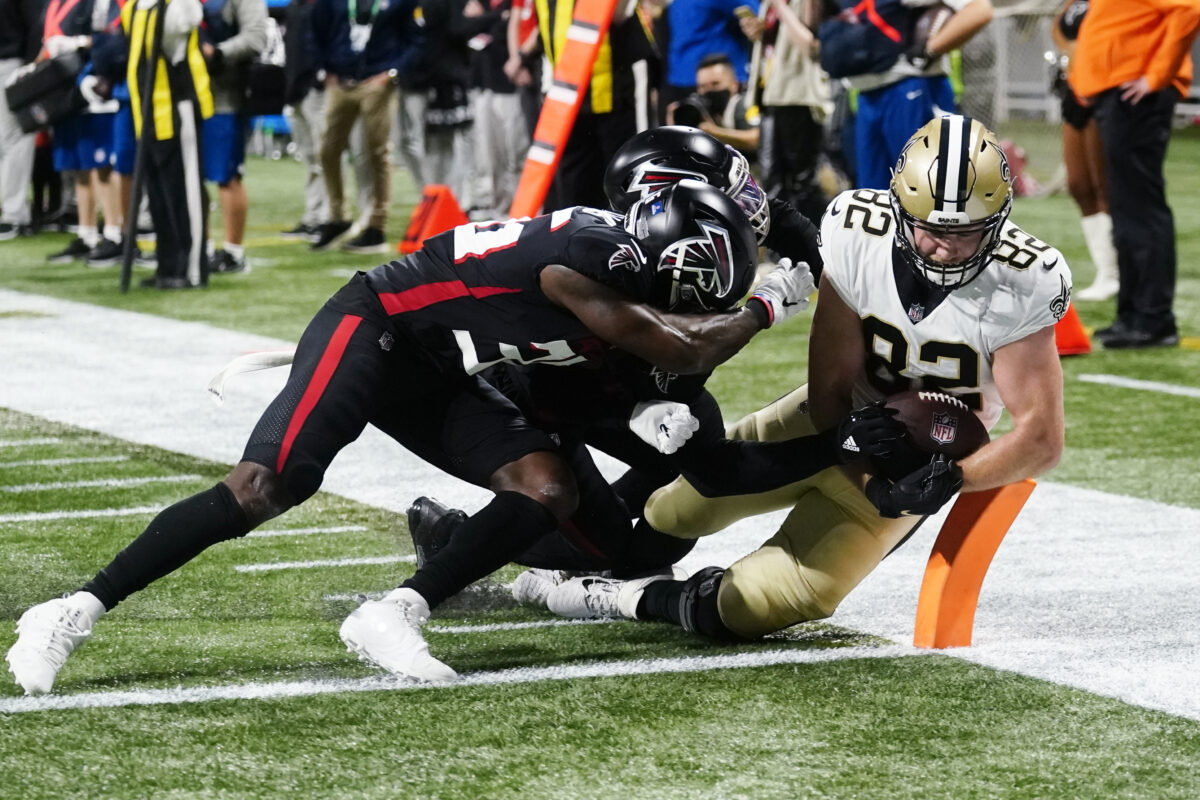 #Saints on the board first: Hill to Trautman – TOUCHDOWN! 🙌#NOvsATL | 📺: FOX pic.twitter.com/19RYjVe51R

We’ll say they saved the best for last. The New Orleans Saints ended their opening possession with a touchdown for the first time this season, with quarterback Taysom Hill sending a high-arcing pass to tight end Adam Trautman from 18 yards out against the Atlanta Falcons. It was the first touchdown the Saints have scored on their opening drive in 2021; over the first 16 games, only three opening drives ended with points, all field goals.

And it was a great play from all involved. Trautman turned his head at the right time to spot the ball and adjust his route. Hill put enough air under it to make sure his pass fell where only his receiver had a chance for it. And their teammates around them sold the play-action well enough for the Falcons defense to buy into the run fake, creating enough time for New Orleans to get points on the scoreboard first.

This is exactly what the Saints need to do if they’re going to reach the playoffs. Let’s hope more big linkups between Hill and his supporting cast are on the way to put this one away quickly.

If you were wondering when (or if) we’d see Panthers QB Cam Newton this week, you got your answer. 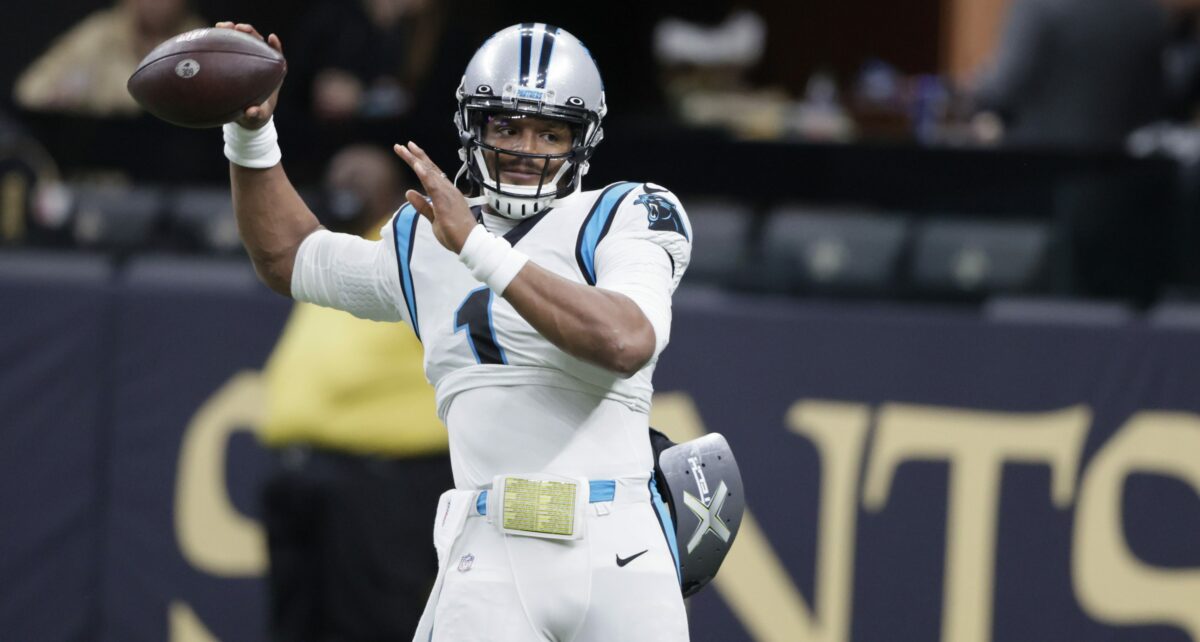 As Carolina Panthers head coach Matt Rhule kept his plan close to his smock all week long, we didn’t know when (or if) we’d see Cam Newton here in Week 17. Well, we’ve had ourselves a sighting.

On the offense’s second possession of the game, Rhule threw Newton in on a 1st & 10 from the New Orleans Saints’ 26-yard line and got himself a 5-yard rush from his backup quarterback. Rookie running back Chuba Hubbard, on the very next play, capped off the 10-play, 81-yard drive with a powerful 21-yard touchdown run.

Newton temporarily subbed in for starter Sam Darnold, who had held his own to that point. Through Carolina’s first two touches, Darnold completed each of his nine passes for 88 yards against a New Orleans defense that allowed just one touchdown over the previous three weeks.

Although the vast majority of those attempts were quick, short to intermediate throws, the fourth-year passer orchestrated two scoring drives that gave the Panthers a 10-3 lead at the 13:09 mark of the second quarter. 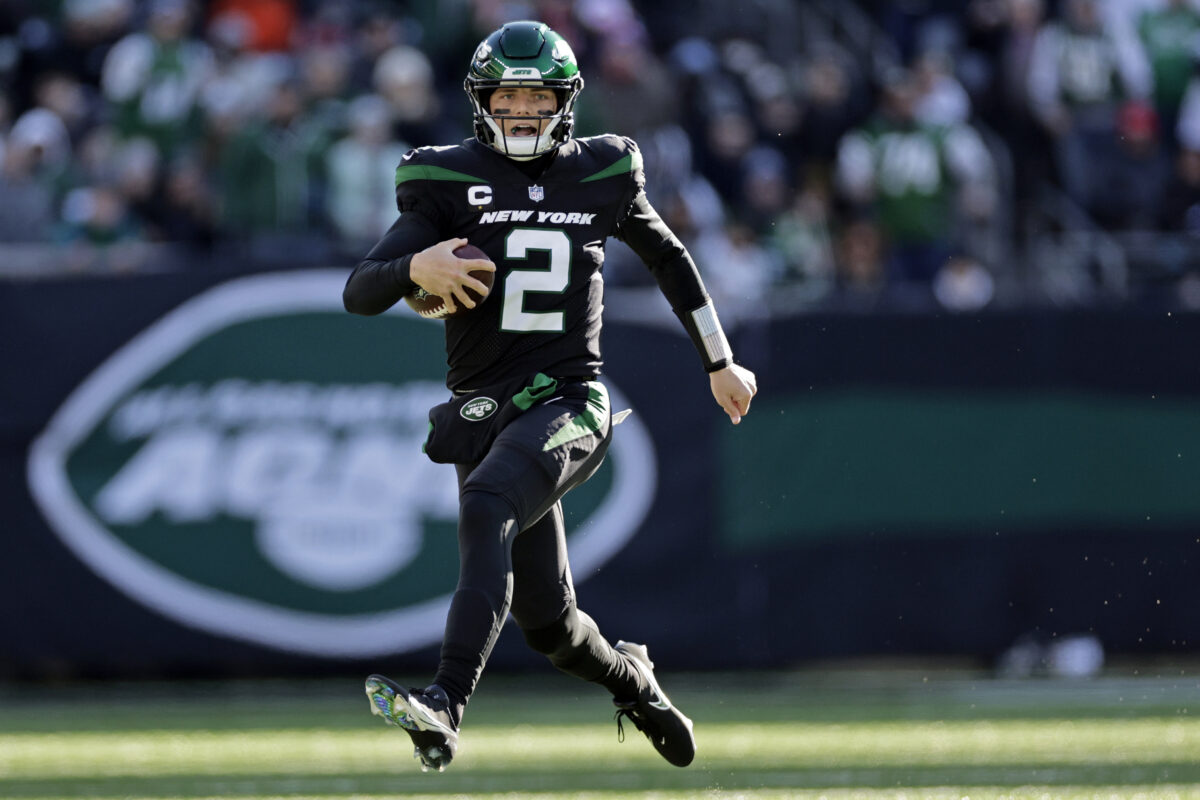 Zach Wilson’s rookie season for the New York Jets hasn’t been the most exciting, but he provided an epic clip for the highlight reel during Sunday’s win over the Jacksonville Jaguars.

Wilson showed off his impressive athleticism with a 52-yard touchdown run, scrambling to his right and weaving his way through the entire Jags defense on his way to the end zone.

The No. 2 overall pick in the 2020 NFL draft still has a long way to go, but this play was just a glimpse of what he’s capable of bringing to the offense when a play breaks down.

There wasn’t much for the Panthers to celebrate against the Bucs on Sunday. But Robby Anderson still did anyway.

Even in what’s been a particularly disappointing season for Carolina Panthers receiver Robby Anderson, he hasn’t stopped being himself. So at least there’s that.

With his team down 32-6 during Sunday’s battering at the hands of the Tampa Bay Buccaneers, the sixth-year wideout spit in the face of convention and refused to hold back his pride. Anderson, regardless of that godforsaken score, put exclamation points on a pair of first-down receptions with some (admittedly hilarious) acts of defiance.

Here's the play.. not the same situation as Chase Claypool, but still so silly. pic.twitter.com/GJsJBfvYmA

Robby Anderson is doing this after a first down. When they’re down by 26 pic.twitter.com/q6qeaD0vcp

Those two grabs helped make up for a five-catch, 58-yard day for Anderson. And while it’s considered poor form to celebrate while staring down the barrel of a three-score deficit that late in the game, he’s probably had some pent up energy to let out in the midst of this lackluster campaign.

Plus, the 28-year-old is fresh off getting engaged just six days ago. So you can’t tell this man anything right now.

Congratulations, Robby and keep doing you.

Jeremy Chinn, Robby Anderson and Cam Newton saved the Panthers—at least in the first half—from a full-on beatdown in Buffalo. 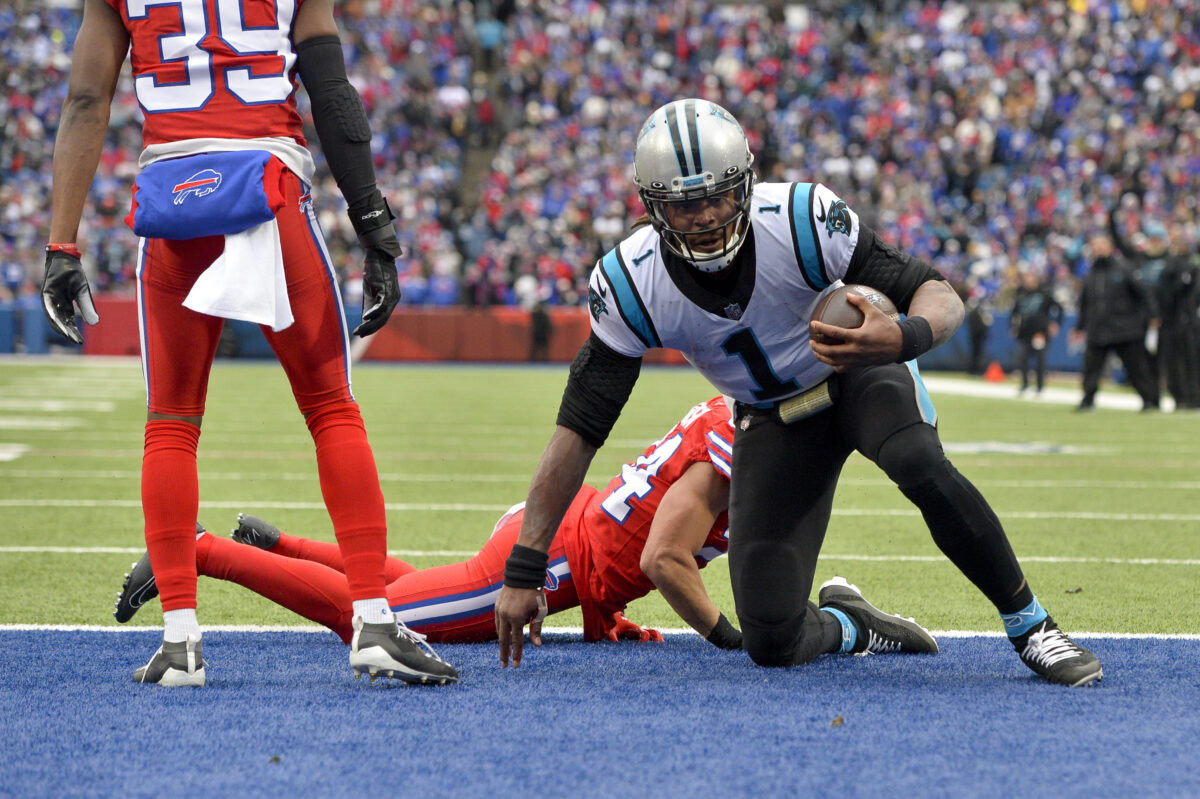 Down 14-0 with just under five minutes to go in the first half, the Carolina Panthers looked as if they were about eat a full-on avalanche from the Buffalo Bills. But a few slick plays gave them a way out.

On a 1st & 10 from the Buffalo 22-yard line, Panthers safety Jeremy Chinn picked off Bills quarterback Josh Allen. Chinn, whose phenomenally athletic play gave him his second career interception, set Carolina up in opposing territory at the 37.

Jeremy Chinn was READY for this pick!

The very next play would then see some trickery from offensive coordinator Jeff Nixon. Nixon dialed up a little end-around action for wideout Robby Anderson. Anderson tied a career-high on a 30-yard rush to get the Panthers down deep into the red zone.

Robby Anderson turned on the 𝓳𝓮𝓽𝓼…

Then, quarterback Cam Newton did the rest. Newton punched in 4-yard rushing score, his fifth of the campaign, to cut the lead to 14-6 at the 1:48 mark of the second quarter.

He would subsequently find receiver DJ Moore on a beautiful throw and catch for a two-point conversion because—remember—there’s no Zane Gonzalez.

Following a field goal by Buffalo’s Tyler Bass 26-yard to close out the quarter, the Panthers went into the break down 17-8. 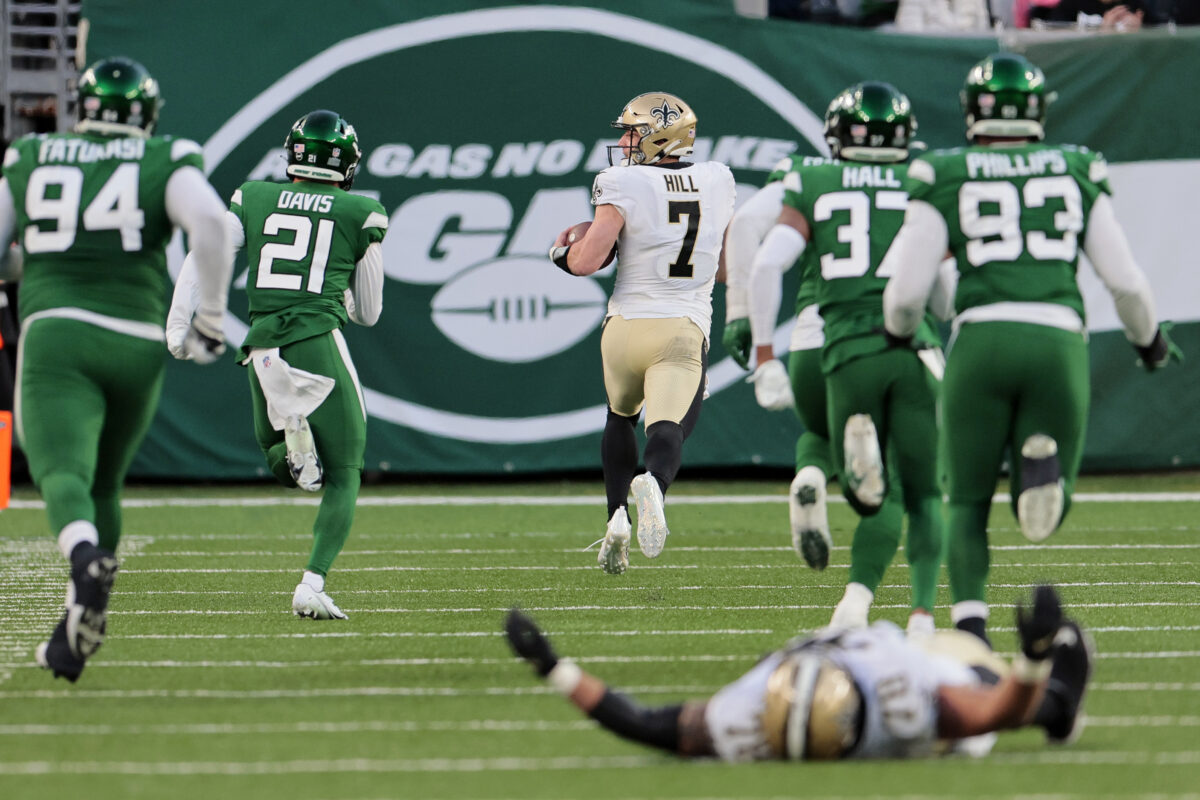 Whew: Taysom Hill chose to leave no doubt in the New Orleans Saints’ Week 14 win against the New York Jets, following his blockers into the open field so that he could streak towards the end zone. He cruised through Jets territory and celebrated with teammates, with the kicking unit stepping up to secure the win.

It was Hill’s second touchdown run of the day, having previously angled in from two yards out without being touched by a single New York defender. Those two scores helped lift New Orleans to a 30-9 win on the road and snapped their five-game losing streak, the longest of the Sean Payton era.

Maybe he should have slid to make sure the Saints could run out the clock (that was Alvin Kamara’s takeaway). But man, isn’t this more fun? 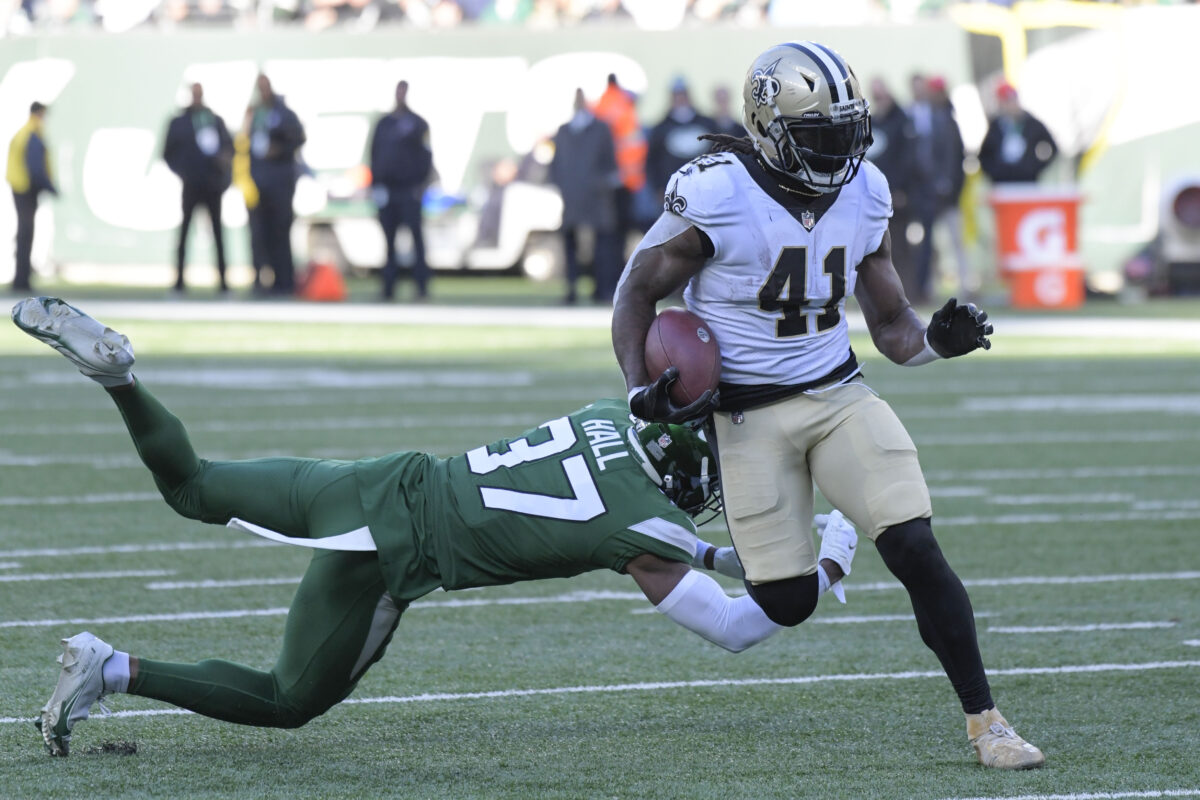 Whew: Alvin Kamara is good at football, guys. The New Orleans Saints running back retook the lead in Sunday’s game with the New York Jets on a 16-yard touchdown run, cutting back behind the formation to put some space between him and the Jets defenders in pursuit. A subsequent point-after kick gave the Saints a 10-3 lead over New York.

It’s wild how easy he makes feats like this look. But when you’re a unique athlete you make special plays, and that’s become Kamara’s calling-card. Great to see him moving so well after he missed four games with a knee injury.

In a a bigger-picture view, this was the 67th touchdown that Kamara has scored in his Saints career as a runner, receiver, or returner. That cut the gap between him and legendary Saints wideout Marques Colston to just five scores in franchise history. If Kamara can finish his year strong, there’s no reason he won’t claim that record before season’s end.

The Panthers began the (Jeff) Nixon administration on a strong note in Week 14. 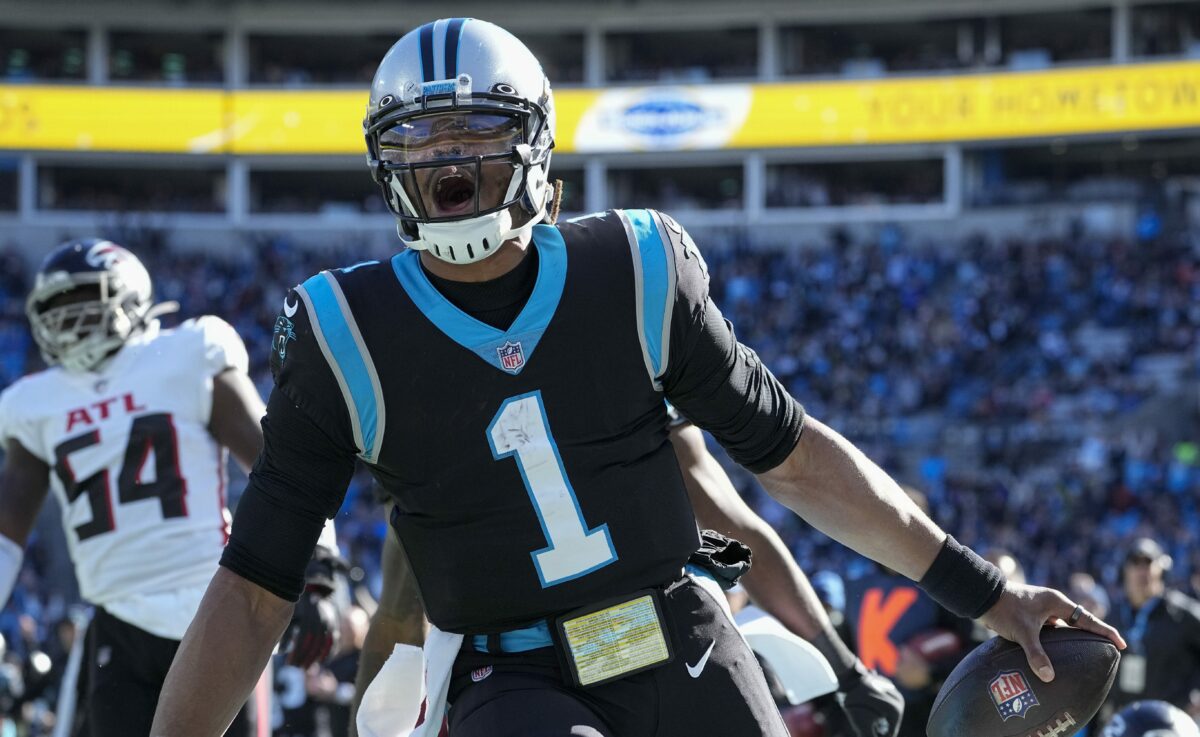 At 5-7 and losing their playoffs lives at an alarming rate, the Carolina Panthers needed a change and they needed one quickly. And even though the dismissal of Joe Brady may or may not have been the prudent call, something did—in fact—happen quickly in the offense’s first drive without him.

On the opening possession of the Week 14 contest against the Atlanta Falcons, and the first under new offensive coordinator Jeff Nixon, the Panthers trekked into the end zone for a nine-play, 65-yard drive. The smooth trip was capped off by a 12-yard touchdown run by quarterback Cam Newton to give Carolina an early 7-0 lead.

Didn't know we could love a slow-mo clip so much 🤟🏾

Newton’s rushing score was already his fourth (through three games and a not even a quarter) of the 2021 season. He also went three-for-three on his passes for 33 yards on the drive.

Those three passes were a complement to the six runs called by the offense. That ratio, obviously, will be something to keep an eye on as head coach Matt Rhule looks to keep establishing the run.