Never miss a game this season with our downloadable 2022 Michigan Wolverines football schedule for your smartphone. 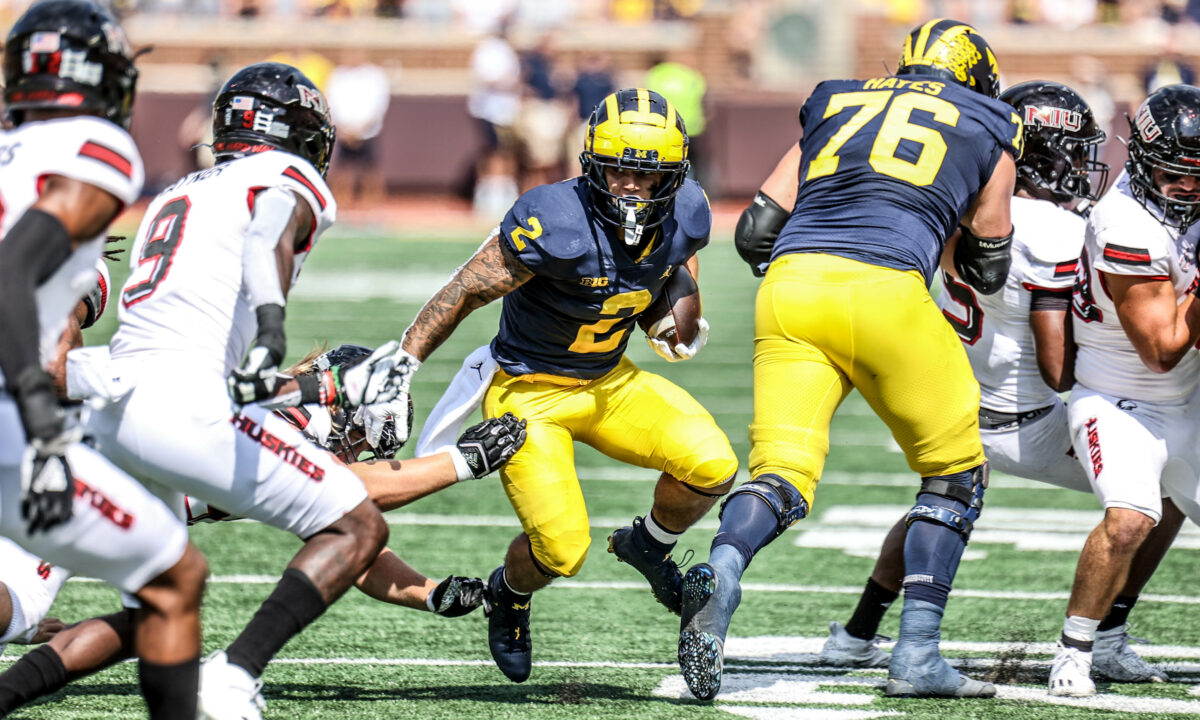 Never miss a game this season with our College Wire downloadable 2022 Michigan Wolverines football schedule. Use it as wallpaper for your lock screen on your smartphone.

Also, share it with friends so they have the football schedule with them at all times too!

You can buy tickets to every Michigan Wolverines game at TicketSmarter.

This was a really good hire by U-M! #GoBlue 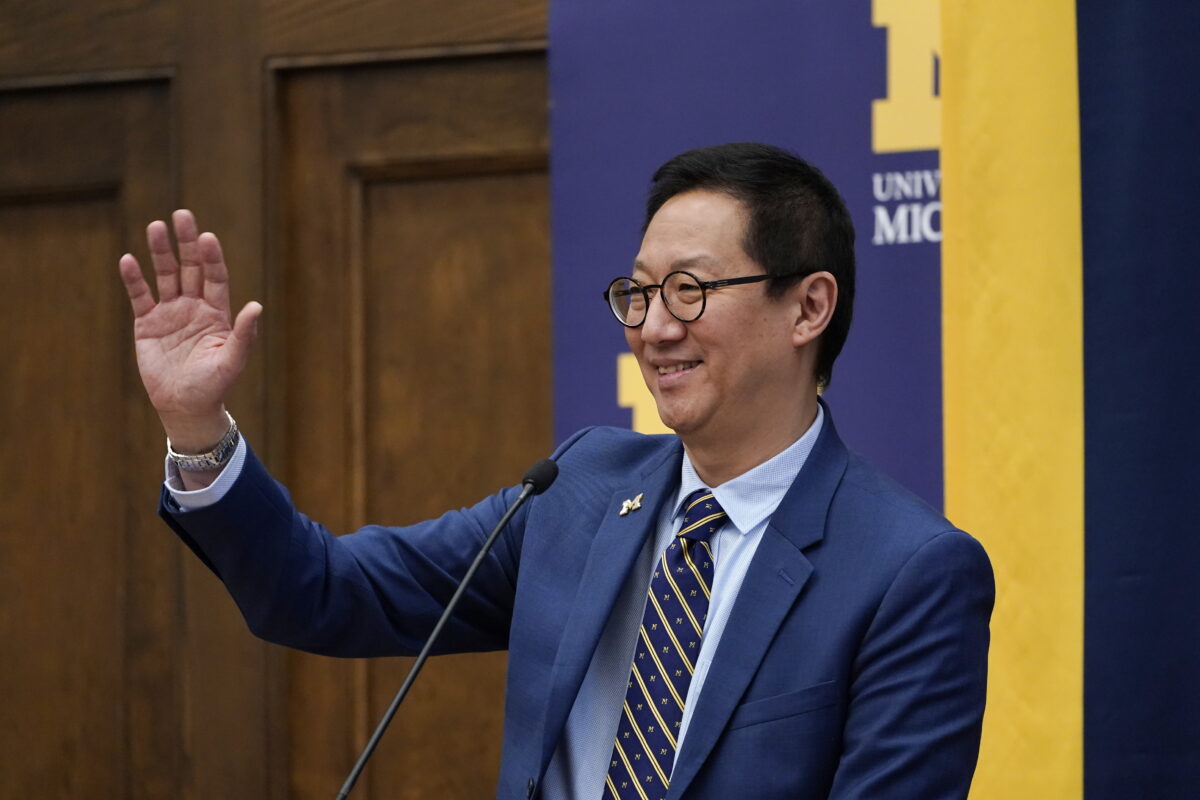 By all accounts, Dr. Santa Ono is precisely what the University of Michigan wanted in its new president. But also, it likely has gotten exactly what it needs.

From the start, former president Dr. Mark Schlissel was a bad fit, espousing a brand of snobbery perfectly fit for the Ivy League — he came from Brown. But he was a terrible fit in Ann Arbor. As he was frequently decried as an elitist, he did nothing to disabuse the locals of this notion, starting with his comments that his focus was more on the academic side than athletics. That might sell well in Providence, but not in a city that boasts the largest football stadium in America. Naturally, the marriage ended in the only way it could — in disgrace.

However, with Ono, Michigan gets the best of all worlds. An affable, congenial face for the university, who will strive to push academics and research, while also taking athletics not just into account, but pushing for that side to be even greater. His comments upon his hiring on Wednesday reflect that.

“Playing at the highest level is incredibly important for public research universities,” Ono said. “The University of Michigan has a storied history and has a great set of teams right now across a wide group of different sports. It’s a point of great pride for the institution. It knits the whole community together. So, I think there’s a tremendous synergy in between academics and athletics, and I want to do everything I can to ensure that Michigan competes at the highest level.”

Compared that to what Schlissel said shortly after he began his tenure:

“I also feel strongly that the students who come here to be athletes — are students and that they have all the opportunities for education and to take advantage of everything that goes on here at the university, as well as pursue the sport that they love.”

That’s nothing short of tone deaf when it comes to what the University of Michigan is. Yes, alums want athletes to succeed in the classroom and to help elevate the university’s good standing academically. But, athletics and academics are not diametrically opposed, especially considering that athletics are the veritable front door to the academic side for the vast majority of the populace at-large.

Schlissel never seemed to understand that, and thus was often at odds with the self-sustaining athletic department. Eventually, his snobbery took its told on the academic side, too.

Ono, on the other hand, has been well-regarded at his most recent stops. From the University of British Columbia to the University of Cincinnati, he’s cultivated a sterling reputation. At the latter, he did so while emphasizing the athletic side just as much as the academic side.

When Mary Sue Coleman stepped down, her successor did the university no favors. She stepped back in as interim president, and her next successor has an opportunity to right many of the wrongs levied by Schlissel. We’ll see how Ono steps up to the challenge.

An oldie but a goodie! #GoBlue 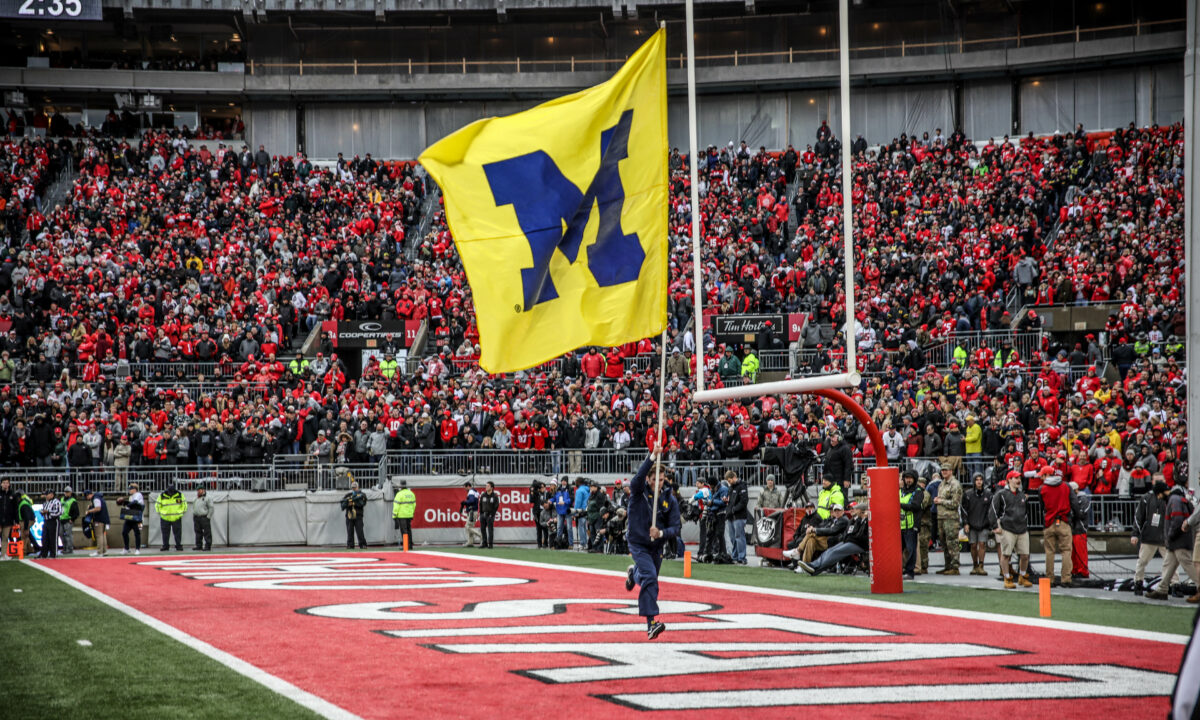 In 2019, Ohio State attempted — and failed — to trademark the word ‘the,’ made famous in Columbus due to players and fans emphasizing the article before saying Ohio State University. And back then, the University of Michigan trolled OSU on social media for the effort.

OSU managed to be successful, three years later, at trademarking the ‘the,’ as it was announced on Wednesday. Thus, Michigan was at it, yet again.

Rekindling the exact troll from 2019, the official University of Michigan Twitter account quote tweeted the news of OSU’s trademark grant with a screenshot of the original troll, indicating that U-M would trademark the word ‘of’ which, of course, connects university and Michigan.

Of course, this is all banter that’s in good fun when it comes to the rivalry. Still, given the hatred for all things Michigan in the state to the south, it wouldn’t be a surprise if Ohioans took great offense to Michigan’s good-natured ribbing.

Wolverines Wire celebrates 15 notable alumni of the University of Michigan. 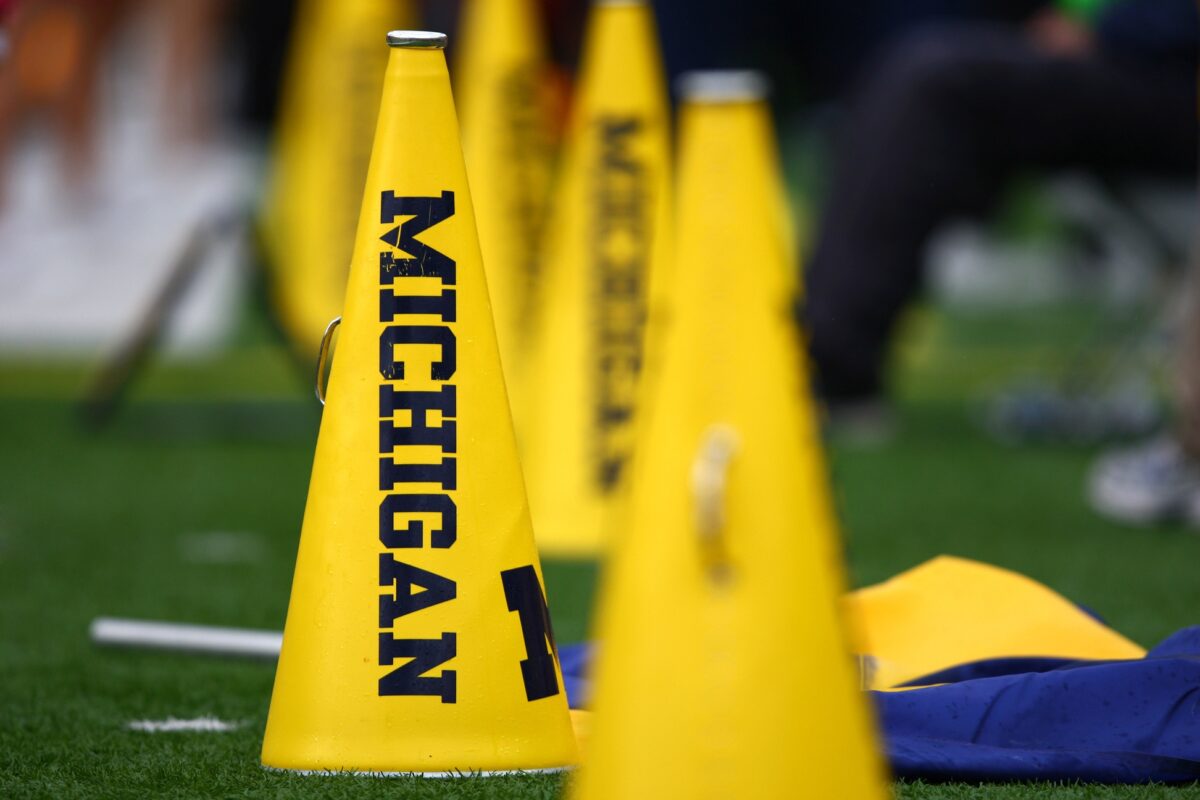 Founded in 1817, the University of Michigan boasts a rich tradition as one of the nation’s finest institutes of higher education.

The university’s programs in education, engineering, medicine, pharmacy, social work and law annually rank among the top departments in the country.

So it should come as no surprise that many of the leaders and best in myriad professions attended college in Ann Arbor. From actors and astronauts to business and technology trailblazers, countless successful luminaries have walked the fabled halls at U-M.

With all that in mind, Wolverines Wire presents a list of celebrity alumni from the University of Michigan.

Oh, this is too good! Check this out! 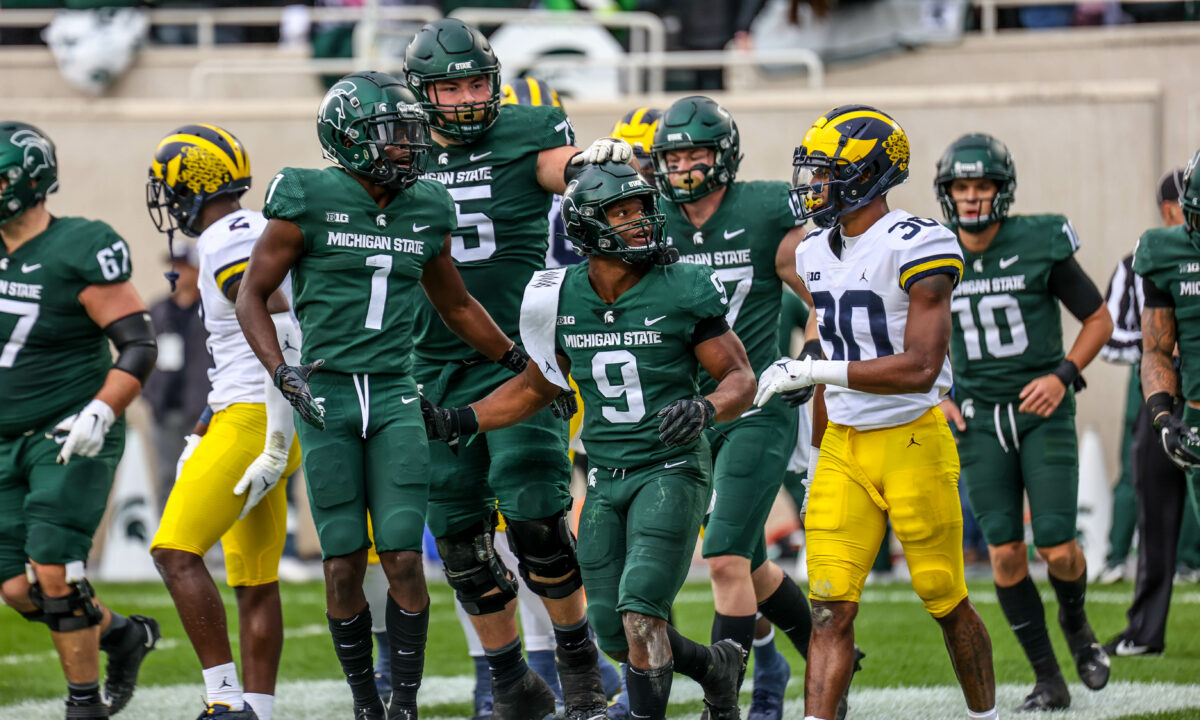 When a prolific Big Ten running back asks for your business, of course you don’t say no. And if that running back plays for Michigan State and you’re Michigan fans, you find a way to make that work to your advantage.

Such is the case for clothier State and Liberty, an Ann Arbor-based business that specializes in upscale clothing meant to fit athletes. We’ve seen ambassadors for the company such as former Michigan defensive tackle Mike Martin, so when Spartans running back Kenneth Walker III asked them to fit him in a suit, it’s no surprise that the owners of the company would get him suited up — but with a little something extra.

They posted the video to their Twitter account on Friday, and you can see the prank they pulled off on Walker near the end.

Congrats to @Kenneth_Walker9 on cleaning up at the @ESPNCFB awards last night. Check out this behind the scenes footage of his suit fitting and DEFINITELY watch until the end to see a little prank on Sparty #goblue @umichfootball @msu_football pic.twitter.com/9xGb4gwXmn

It’s good-natured fun like this that makes the rivalry great — not the incessant back-and-forth that has happened between the fan bases in recent weeks.

Never miss a game this season with our downloadable 2021 Michigan Wolverines football schedule for your smartphone. 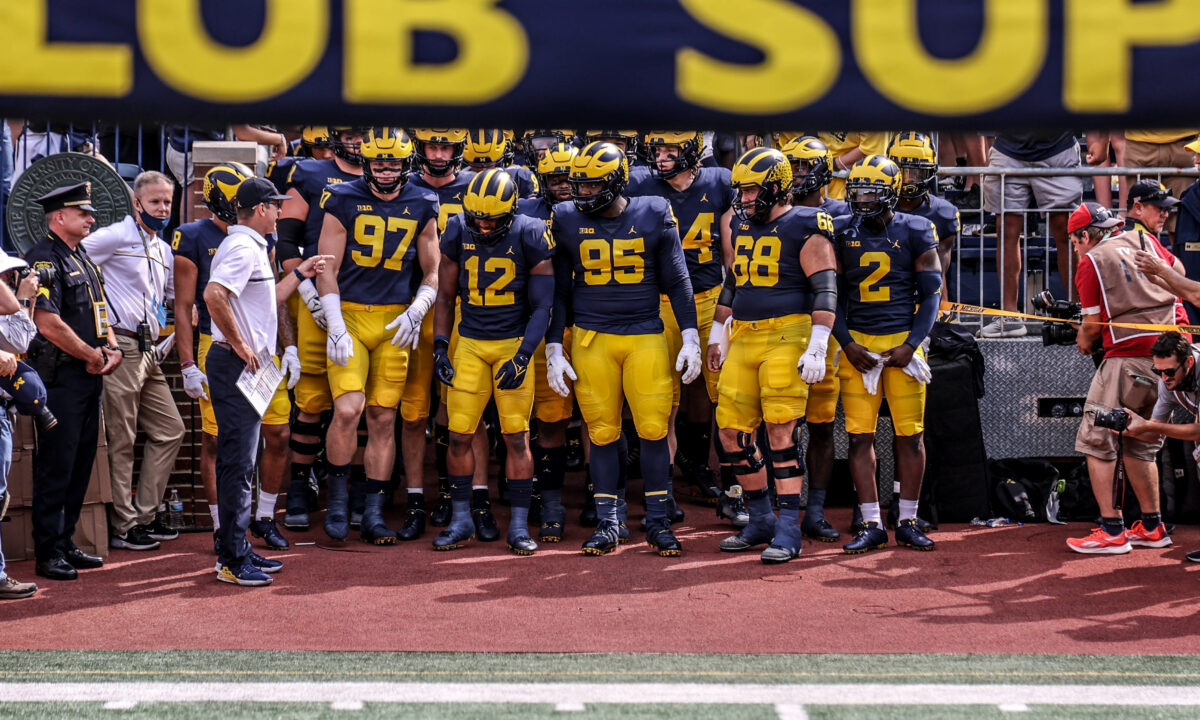 Never miss a game this season with our College Wire downloadable 2021 Michigan Wolverines football schedule, Use it as wallpaper for your lock screen on your smartphone.

Also, share it with friends and let them have the schedule with them at all times too! 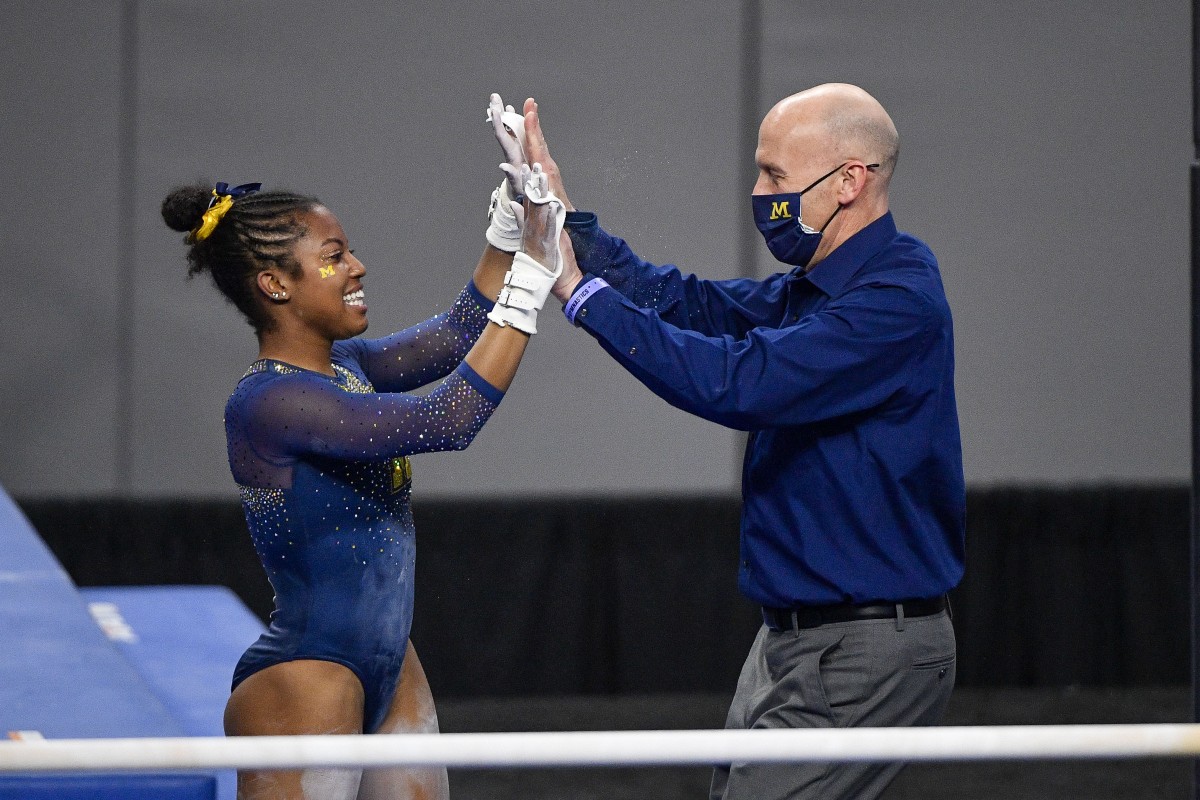 It’s been a long drought in Ann Arbor, but one team was able to bring a national championship home.

For the first time in program history, the Michigan women’s gymnastics teams took home the top honor, slightly edging out Oklahoma in a gripping performance on Saturday afternoon.

From Juwan Howard to the football team to others in the media, a vast array of maize and blue personalities took to social media to express their joy over the Wolverines bringing home a national championship, the first to come to Ann Arbor since 2013-14, when men’s gymnastics won it all.

Here are some of the best Twitter reactions to the incredible feat.

The breadth of Michigan athletics will have to hit pause due to COVID-19 issues in Ann Arbor. 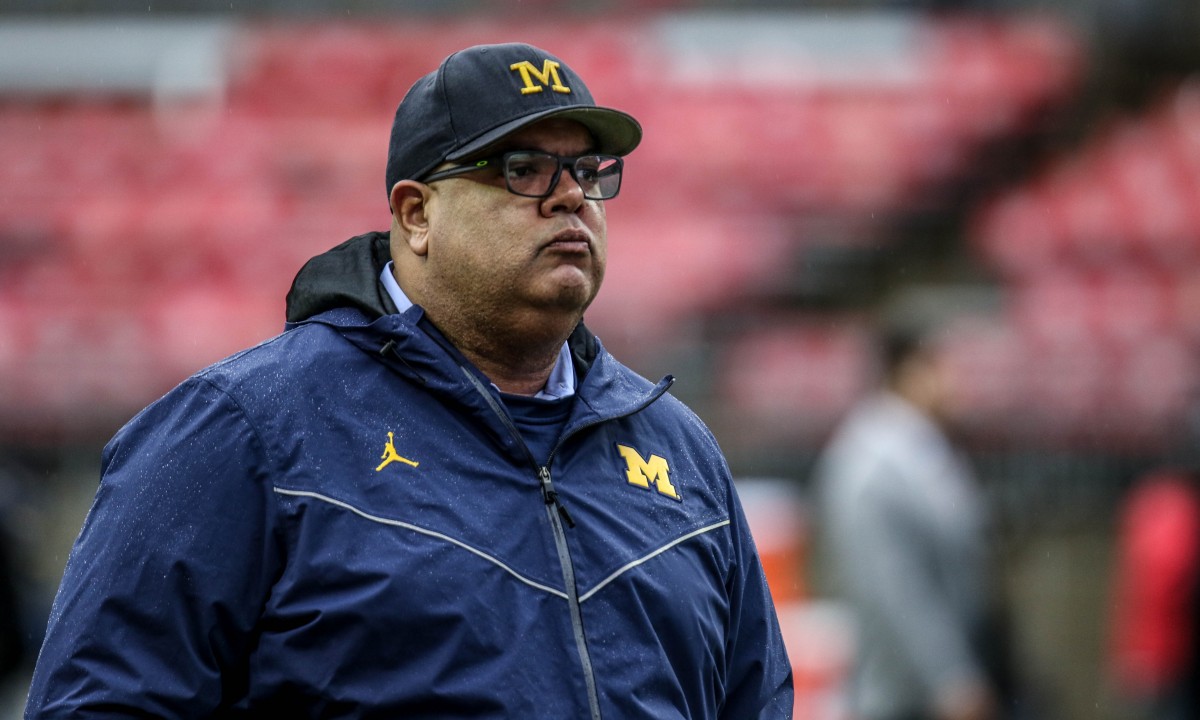 [jwplayer RYGtg5eG-XNcErKyb]
If you were excited about any forthcoming University of Michigan athletics events, you’re gonna have to wait a minute.

Cases of COVID-19 in Ann Arbor have been skyrocketing as of recent, but just as importantly, there has been a detection of the new variant which is even more contagious, but no more deadly. As a result, according to The Michigan Daily’s Ethan Sears, the state of Michigan is pulling the plug, and the whole of Michigan athletics will be put on pause for two weeks.

The decision was made not by athletic department powers-that-be, but state of Michigan health department officials.

NEWS: State health department to suspend University of Michigan athletics for two weeks, per source close to the athletic department and documents obtained by The Daily. Five confirmed cases of B.1.1.7. COVID-19 variant in dept, 15 more presumed positive.

One of the nation’s most prominent rappers is sporting some maize and blue. 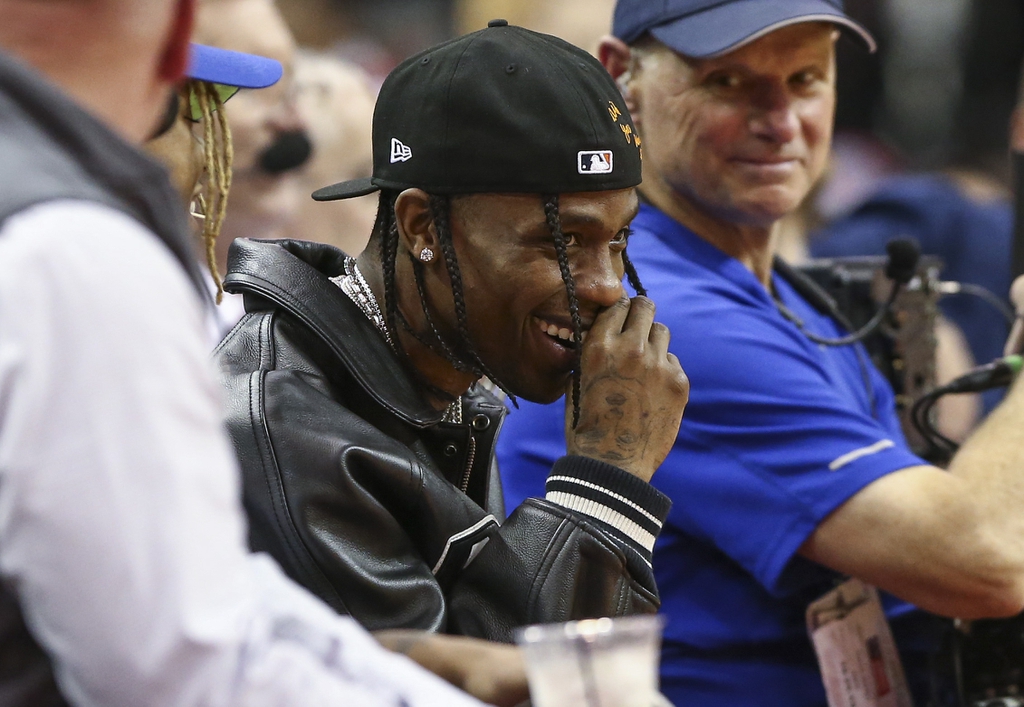 [jwplayer vtvEmgnu-XNcErKyb]
Some used to point out that there was something of a resemblance between former Michigan football wide receiver Donovan Peoples-Jones and superstar rap artist Travis Scott, As DPJ often sported Scott’s signature look. But now it’s Scott who’s taking a page out of Peoples-Jones’ book.

Taking to Instagram around midnight on Tuesday morning, Scott posted a new picture to his 32.8 million followers, showing him donning a motorcycle helmet with vintage Michigan shorts and maize and blue Air Force Ones.

While he’s not the first star hip-hop artist to wear Michigan gear — Detroit’s own Big Sean has come to The Big House on multiple occasions — he may be the most prominent.

Find out more about the shoe as well as when they’ll be released. 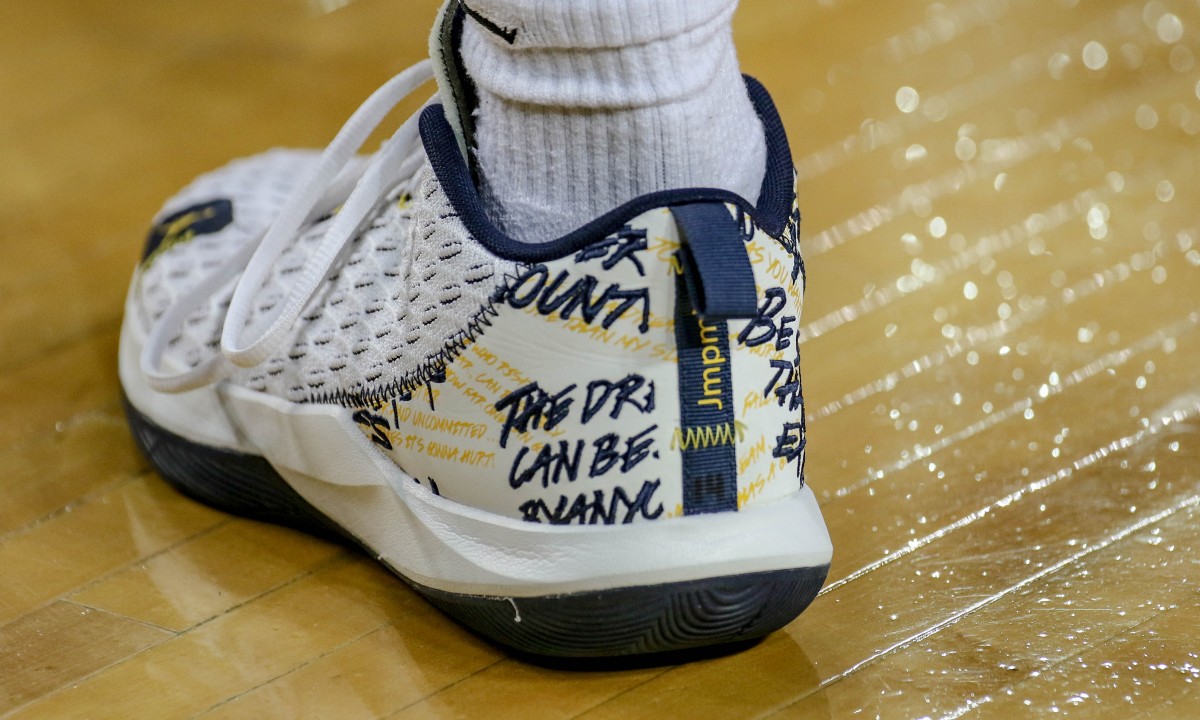 Mark your calendars, Michigan fans. On Thursday, Aug. 20, there will be some new maize and blue merchandise made available.

Ever since the Wolverines made the wholesale switch to Jordan brand and Nike in 2016, the shoes have been something of a hot ticket item. Limited quantities are generally made available, and when they are, they tend to fly off the shelves.

Soon, Nike proper is set to release the Zoom Pegasus 37 running shoe for a variety of schools, with Michigan included.

Crush your miles while repping the Wolverines in the Nike College Zoom Pegasus 37 (Michigan). Delivering the same fit and feel that runners love, the shoe has an all-new forefoot cushioning unit and foam for optimal responsiveness. The result is a durable, lightweight trainer designed for everyday running.

We have to admit, they’re awfully sharp-looking.

They did it. Nike FINALLY made a decent-looking Michigan shoe. Now to search through my couch cushions. pic.twitter.com/VP9mN0ox15

The shoes will be available via order on Nike.com (where you can get a closer look via several different angles) or at MDen.com starting at 10 a.m. on Aug. 20.