BYU vs Stanford game preview, prediction, and breakdown for the Week 13 game on Saturday, November 26 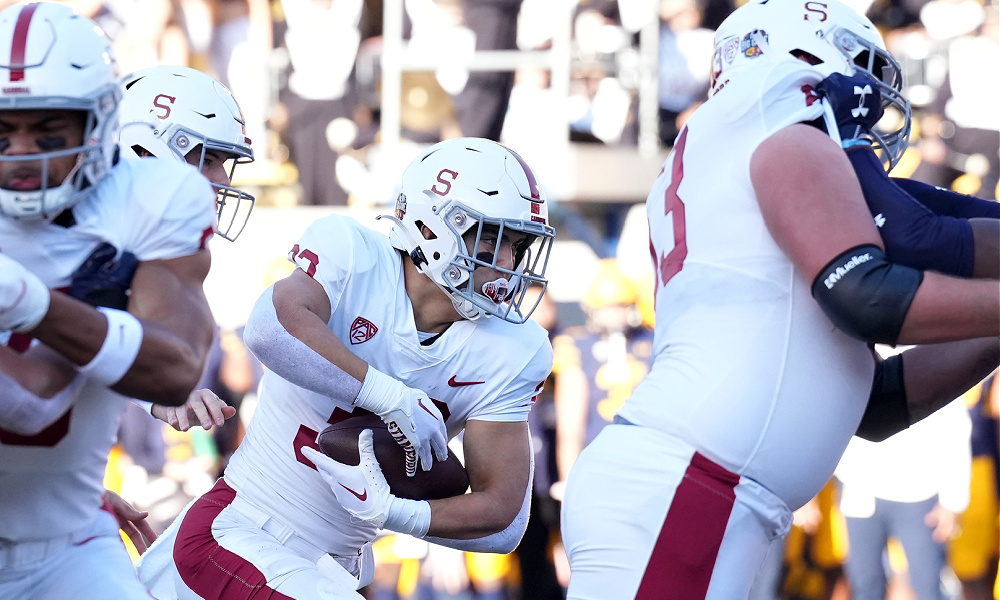 BYU vs Stanford How To Watch

Why BYU Will Win

The passing game has kicked it back in.

Rolling for 455 yards against Utah Tech was no big deal, but that came off a 377-yard, three touchdown day against Boise State. Jaren Hall has thrown for two or more touchdowns in nine straight games and ten of the last 11, and even better are the downfield throws.

BYU has a ground attack – it’s 5-2 when running for over 115 yards – but it’s better when it’s cranking up the downfield plays. Stanford can’t stop the run – going 0-7 when giving up 160 yards or more – but in this, BYU will grind to set up the big throws from Hall. But …

BYU’s defense has been struggling, too.

It got the job done against the terrific Boise State running attack, but it’s about to get tested after allowing over 200 yards on the ground in five straight games before that.

Stanford’s passing attack has to keep things moving, but it can’t abandon the running game that couldn’t get going against the better Pac-12 defenses but should have a little success here.

It has to establish the run early, hit a few third down plays, and it has to keep BYU from consistently moving the chains – it’s the best in the Pac-12 at coming up with third down stops.

There aren’t going to be a lot of turnovers or penalties, and …

It’s possible the defense rises up in the final game of the year, but the three wins came when allowing 14 points or fewer and allowed 27 or more against everyone else.

BYU is 0-4 when scoring fewer than 26 points and 6-1 when scoring that many or more. The BYU offense will struggle to get past 26 points, but it’ll do it.

Pac-12 schedule and previews for the Week 13 games including Arizona State at Arizona, Oregon at Oregon State, Notre Dame at USC, Washington at Washington State 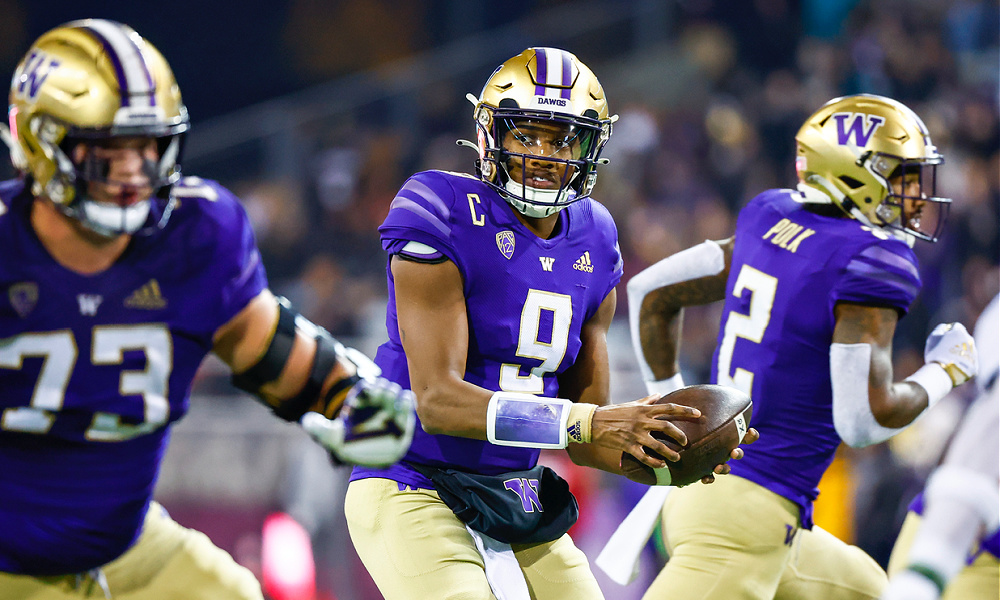 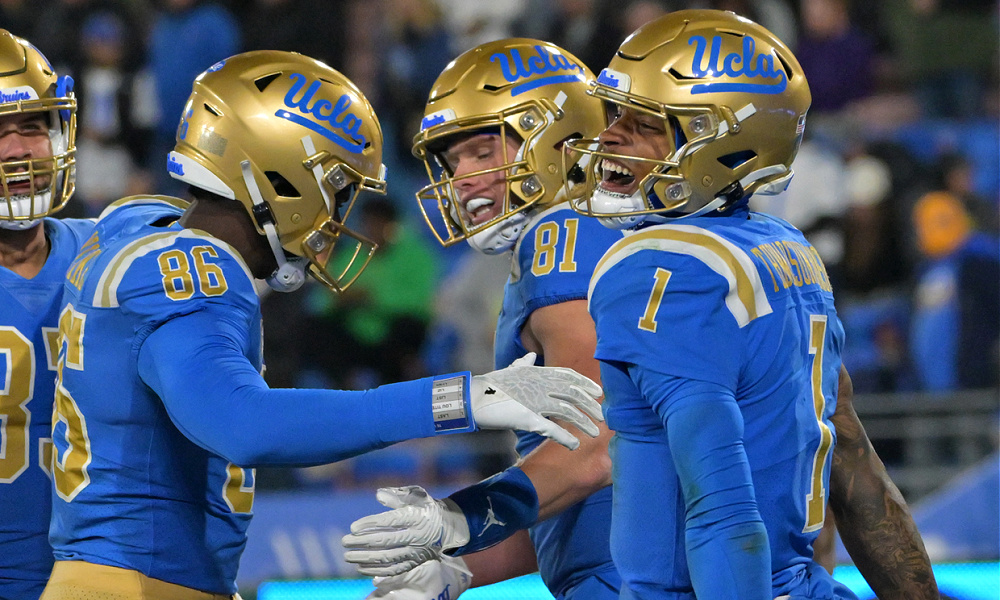 Utah vs Stanford game preview, prediction, and breakdown for the Week 11 game on Saturday, November 12 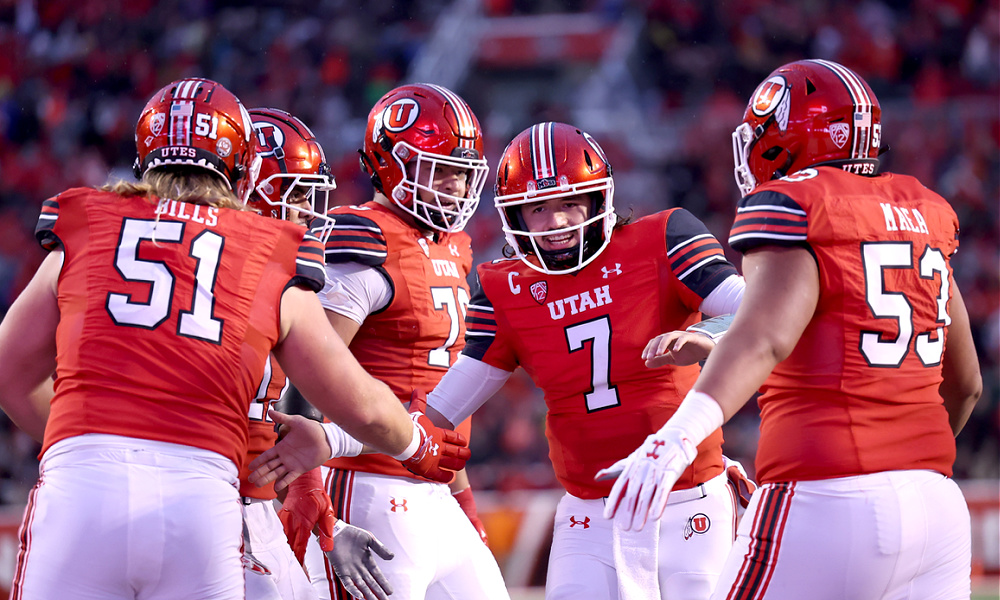 Utah vs Stanford How To Watch

Which Stanford will show up?

Will it be the version that threw well and held firm in the road win over Notre Dame, or will it be the one that didn’t let the defense get off the bus in the 52-14 loss at home to Washington State?

For all of the problems and issues, Stanford’s defense is still the best in the Pac-12 at stopping teams on third downs, the pass defense has held its own and is No. 1 in the conference, and …

Why Utah Will Win

Utah is the wrong team for Stanford to deal with right now.

Turnover margin is a massive issue for the Cardinal – -12 on the year – and Utah has taken the ball away multiple times in six of the last eight games. The bigger problem is a non-existent run defense that got ripped apart for 630 yards and eight scores against UCLA and Washington State over the last two games.

Utah continues to be a powerhouse on the ground. It ran for over 300 yards and five scores in the win over Arizona last week and should pound away at will on a Stanford defensive front that isn’t disruptive enough.

Stanford has to keep this low scoring. Its two wins over FBS teams were by a total of three points – 16-14 over Notre Dame and 15-14 over Arizona State.

The Cardinal will move the offense a little bit, but it won’t be nearly enough to keep up with a Utah attack that will be too balanced and too effective up front.

Pac-12 schedule and previews for the Week 11 games: Washington at Oregon, Arizona at UCLA, Colorado at USC, Arizona State at Washington State, Cal at Oregon State 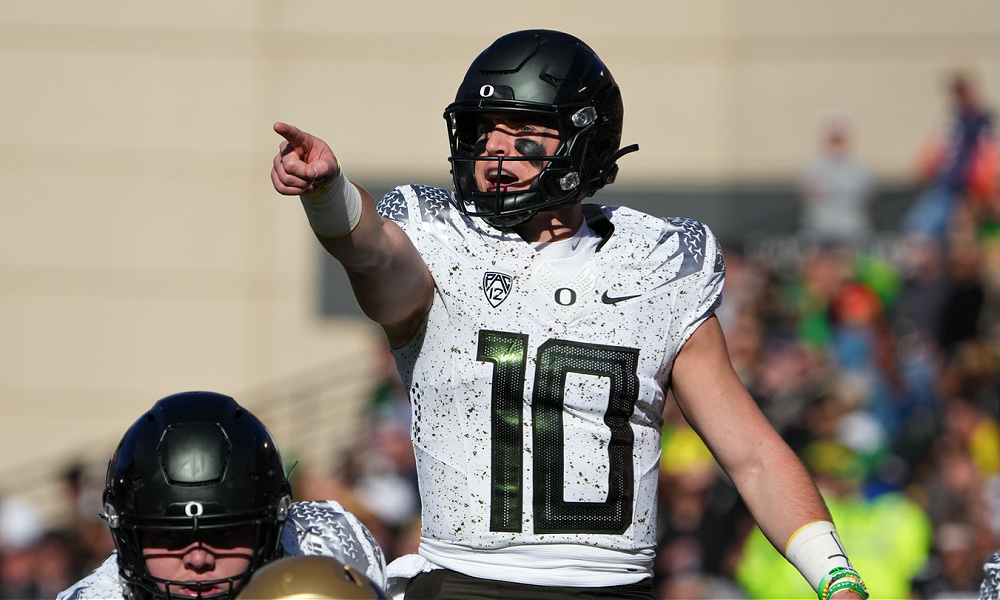 Washington State vs Stanford game preview, prediction, and breakdown for the Week 10 game on Saturday, November 5 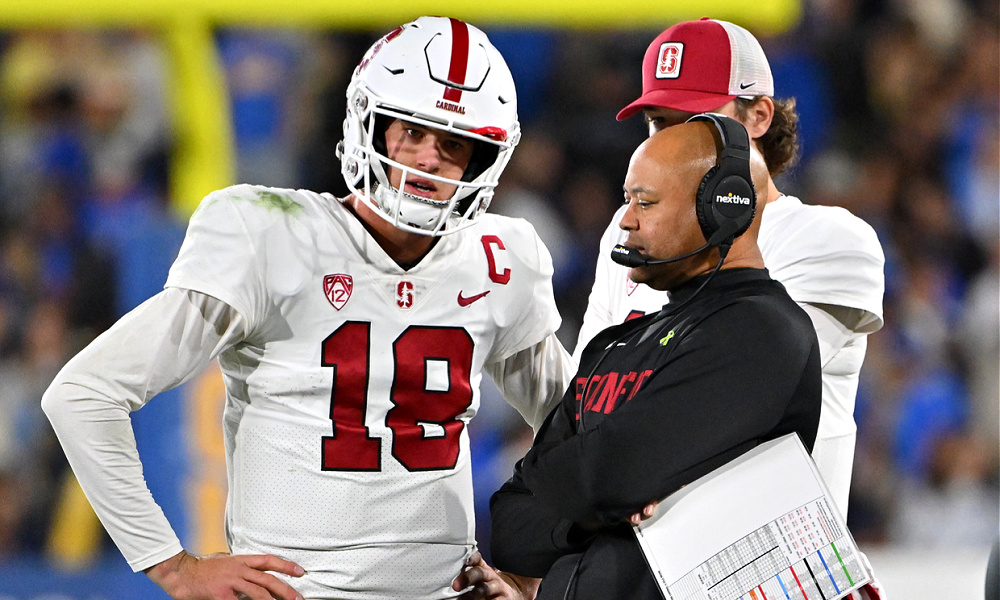 Washington State vs Stanford How To Watch

Why Washington State Will Win

Is anything going right during this three-game losing streak?

The Cougars are struggling to score, but the defense has been able to step it up and keep the team in games.

It bounced back from the rough day against Oregon to keep everyone in the next four games – including USC and Utah – to under 370 yards.

It’s not like Stanford is going to rip it up.

The Cardinal have slowed down the turnovers, but there isn’t enough of a ground game to worry about and the passing game isn’t consistent.

Stanford will be more than happy to be in a close, low scoring, tight game.

Washington State doesn’t make a ton of mistakes, but it’s not good on third downs and Stanford is the best in the Pac-12 at coming up with third down stops. The D will dial it up on a few key plays here and there to stall drives.

The O hasn’t turned it over multiple times in any of the last five games, it’s one of the best teams in the nation at limiting penalties, and all of those little things should matter because …

Stanford has problems against good running teams, and that’s not Wazzu.

This is a ball control team that relies on the defense, but it only hit the 100-yard mark three times so far and has yet to run to run for 150.

Pac-12 schedule and previews for the Week 9 games: Utah at Washington State, Oregon at Cal, USC at Arizona, Arizona State at Colorado, Stanford at UCLA 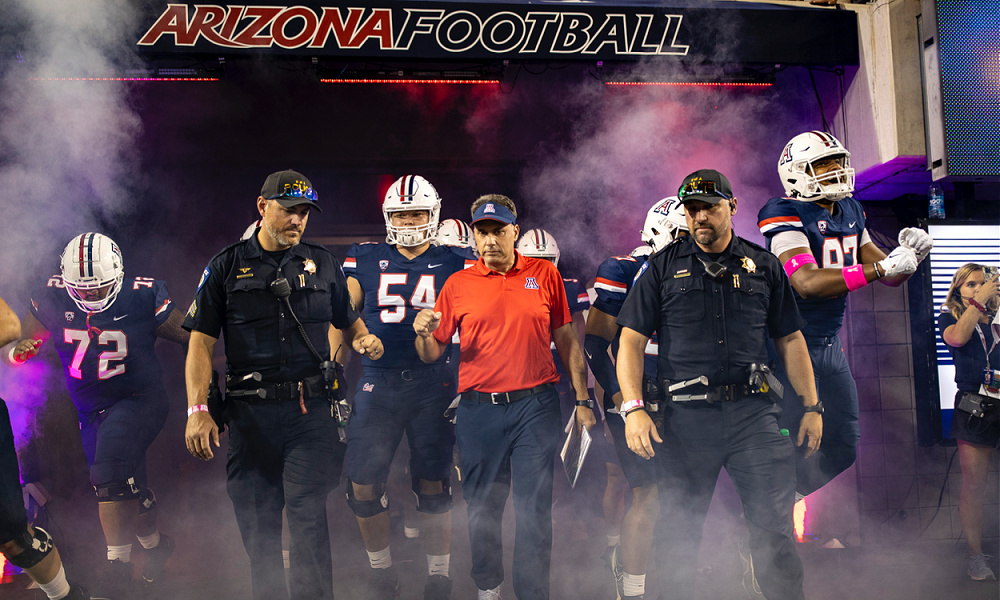 Pac-12 schedule and previews for the Week 9 games: Utah at Washington State, Oregon at Cal, USC at Arizona, Arizona State at Colorado, Stanford at UCLA

UCLA vs Stanford game preview, prediction, and breakdown for the Week 9 game on Saturday, October 29 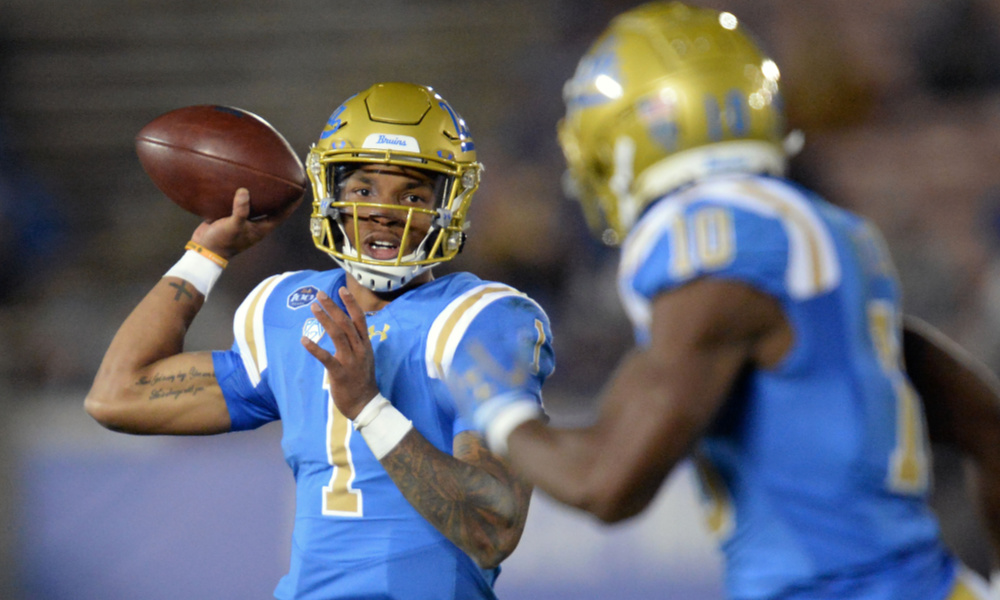 UCLA vs Stanford How To Watch

The Cardinal defense is able to keep games close and tight.

It did the job against Oregon State until a fateful late play in a tough loss, but bounced back with great performances in wins over Notre Dame and Arizona State. Neither win was beautiful, but Stanford has started to force takeaways, the passing game has been good, and there’s real hope now for a bowl game.

UCLA is coming off the tough battles against Washington, Utah, and Oregon. There’s no time for a letdown, but this might be a tough game to push through after playing in three straight high-powered emotional battles.

Stanford should control the clock, it will bring the defensive pressure, but …

Why UCLA Will Win

UCLA will keep this simple. It will run, and then run some more.

The Cardinal haven’t been totally awful against everyone’s ground game – Oregon is the only team to go off – but they’ve been steadily mediocre and should get hit for at least 160 yards.

It’s part of how this all works. Stanford allowed fewer than 160 rushing yards three times and went 3-0. It allowed more in the other four games and lost all four.

UCLA has only been under 160 rushing once – the too-close call against South Alabama – and now it’s going to get the good offensive line going and take control of the game from the start.

Even more than Stanford problems against the run are the issues against teams with strong balance. UCLA won’t have a problem throwing, either.

Stanford will be tough enough throughout to keep this from getting out of hand – Tanner McKee and the passing game will keep pushing – but the defense that’s been so good over the last few weeks will struggle.

It’ll be good on third downs, but UCLA QB Dorian Thompson-Robinson will be sharp on two second half drives to finally start to pull away.

Arizona State vs Stanford game preview, prediction, and breakdown for the Week 8 game on Saturday, October 22 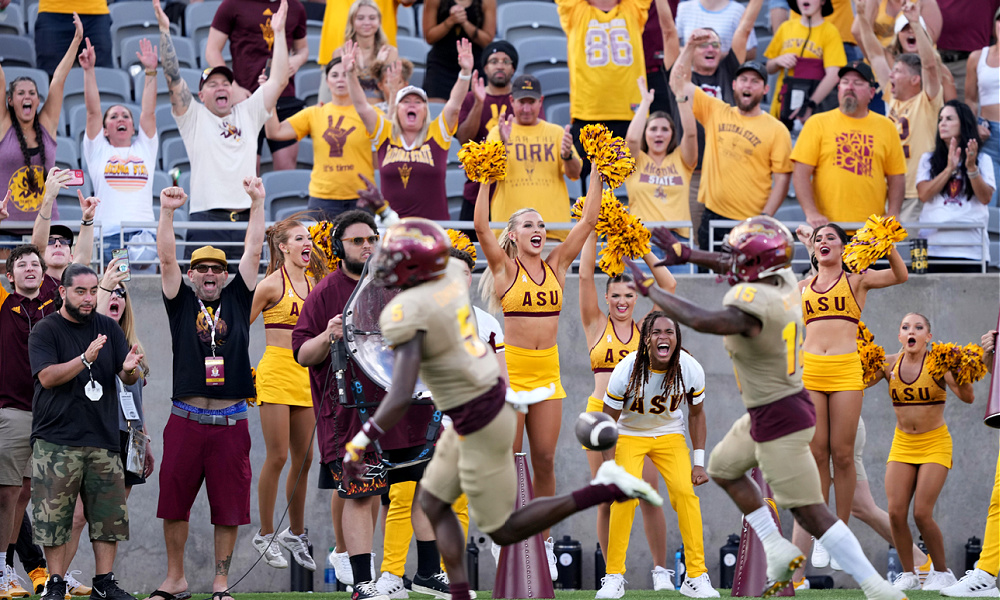 Arizona State vs Stanford How To Watch

Why Arizona State Will Win

Did Arizona State find something two weeks ago in the stunning win over Washington?

It’s been a rough year, but interim head coach Shaun Aguano hasn’t helped step up the passing game, the ground game was okay in the loss to USC and the win over the Huskies, and now the team has had two weeks to take a deep breath and make a big push to come up with something fun over the second half of the season.

The passing game pushed past 320 yards in each of the last two games – Trenton Bourquet stepped in against Washington and went off – but it’s going to take something special to pull this off.

Winning the turnover battle would do that.

Stanford came up with two takeaways in the win over Notre Dame, and the team is still the third-worst in the nation in turnover margin.

Maybe that’s what Stanford really is.

It started the season with a win over Colgate before losing four straight, but those losses came to USC at home, then to Washington and Oregon on the road, and then to Oregon State on a miraculous late play. A good team wins at least one of those, but those were forgivable.

And then came the terrific performance in the 16-14 win at Notre Dame, and now there’s real, live hope to somehow get to six wins.

It starts with keeping the chains moving against an Arizona State defense that’s miserable on third downs. That comes from not having any sort of a pass rush to count on – the Sun Devils are dead last in the nation in sacks and second-worst in tackles for loss.

Arizona State will look like a different, more competitive team over the second half of the season, but Stanford is going to make some noise.

It has to go on the road to UCLA, Utah, and up the road to Cal over the next four games, but first it’ll come up with a strong day on the defensive front and the Cardinal skill parts will have time to operate.

It won’t be gorgeous, but it’ll be a second straight win.

Pac-12 schedule and previews for the Week 8 games, highlighted by Arizona State at Stanford, Colorado at Oregon State, Washington at Cal, UCLA at Oregon 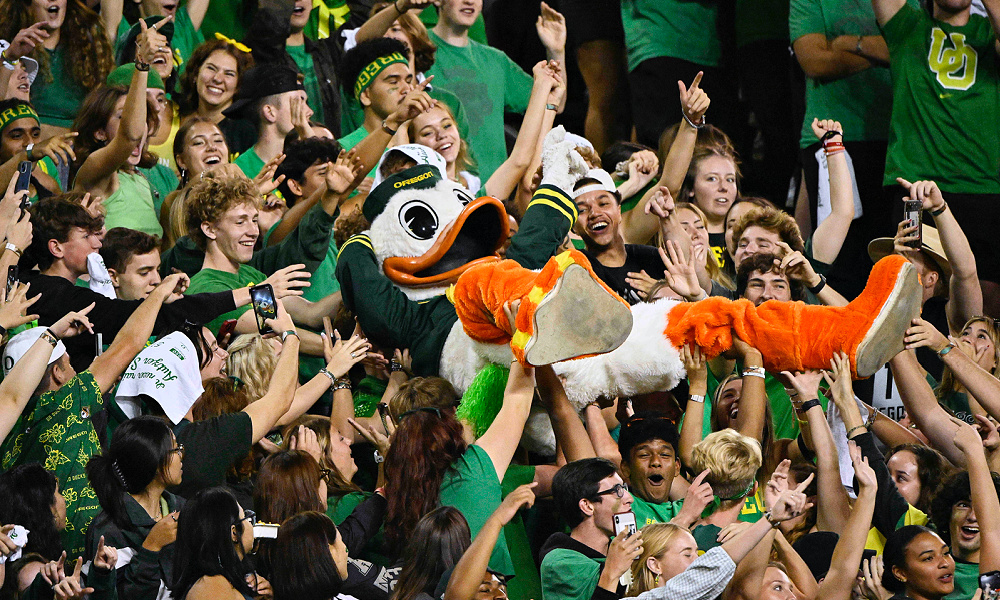 Pac-12 schedule and previews for all of the Week 8 games of the 2022 season, highlighted by Arizona State at Stanford, Colorado at Oregon State, Washington at Cal, UCLA at Oregon