Northwestern 35 Auburn 19. The 10 ten things you need to know about the Northwestern win over Auburn in the Vrbo Citrus Bowl. 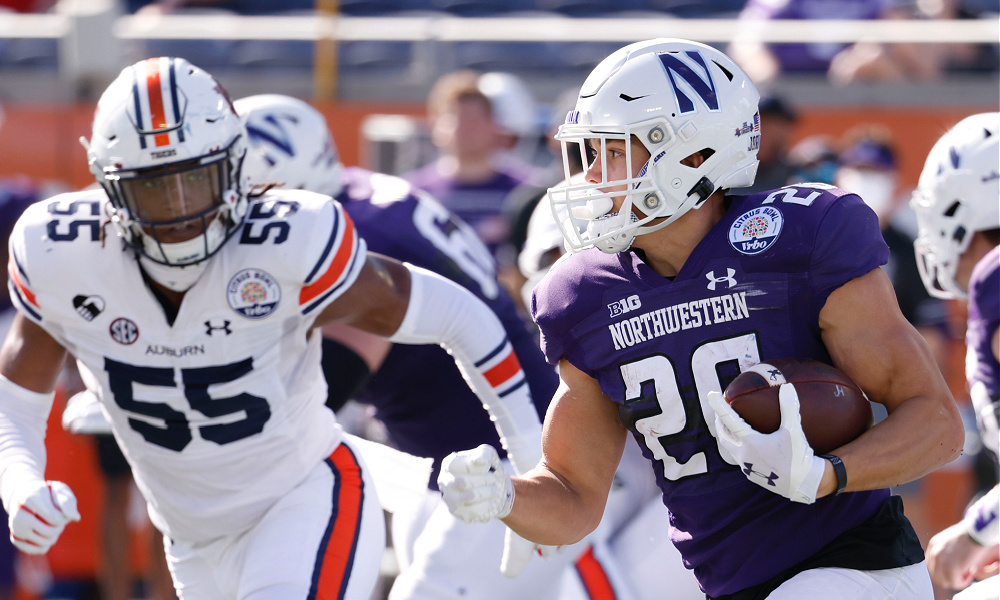 Northwestern 35 Auburn 19. The 10 ten things you need to know about the Northwestern win over Auburn in the Vrbo Citrus Bowl.

Auburn didn’t get the memo that the Northwestern offense just doesn’t do a whole lot.

It failed to hit 300 yards of total O in four of its eight games before this and only hit 400 yards against Maryland and Illinois. The 457 yards against Auburn were the third-most this season, with everything clicking early to take control of the game, and then hammering to take over late.

Auburn struggled to get a third down stop, didn’t generate enough pressure, and couldn’t hold up as the game went on. The Wildcat passing game had time to operate, and the offensive line was able to blast away on a run defense that had big, big problems against teams that were able to control things on the ground. The 51 carries by Northwestern tied Ole Miss for the most against the Tiger D. And with that …

9. Cam Porter is going to be really, really good

The 5-10, 220-pound freshman didn’t do much of most of the season, and then he tore up Illinois for 142 yards on 24 carries and ran for 61 yards in the Big Ten Championship. This was his day to be the hammer, running 33 times for a tough 98 yards and a late touchdown.

Auburn didn’t give up a ton of big runs, but it got nickeled-and-dimed to death.

Is that it for Pat Fitzgerald? He’s being rumored to have a whole lot of interest from the NFL types, but he was supposedly in the mix for the next level a few years ago, too. For a program that couldn’t win bowl games and struggled to come up with any sort of success, that’s four bowl wins in four tries – five in the last six bowl appearances – to go with two Big Ten West championships in three years.

Fitzgerald might still stick around, but defensive coordinator Mike Hankwitz is calling it a career after being a part of the success since 2008. The 73-year-old was tremendous during Colorado’s heyday, was a big part of great defenses at Arizona and Wisconsin, and then with the Cats. His D allowed some late yards, but it dominated.

You want to pitch a near-perfect game if you’re Northwestern? Control the clock for almost 36 minutes, don’t turn the ball over, dominate on third downs, and most of all, get up fast.

The 14-0 in the first quarter meant the world. This isn’t necessarily a come-from-behind team – even though it was able to do it at times – and it works a whole lot better when it got to rely on its defense and ball control style.

NEXT: Top Six Thoughts From The Vrbo Citrus Bowl