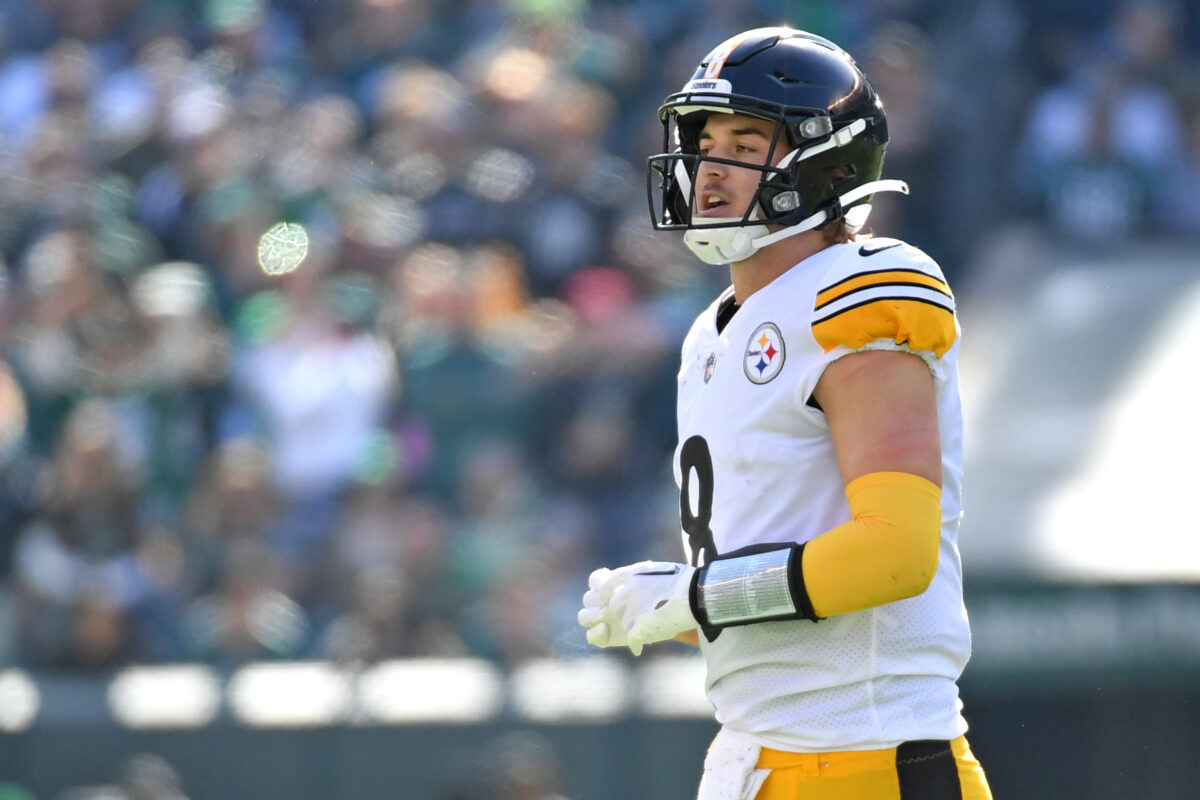 Former New Orleans Saints quarterback Chase Daniel is pulling double-duty these days as a panelist on the NFL GameDay postgame show while backing up Justin Herbert with the Los Angeles Chargers, offering his insight as someone who’s been in the league for 13 years. You could say he’s seen a thing or two in-between trips to the bank cashing checks from six different teams as a veteran backup.

And he was impressed by Pittsburgh Steelers quarterback Kenny Pickett in Monday night’s win over the Indianapolis Colts. Though he admitted Pickett hasn’t found many wins this year while experiencing some first-year struggles, he tipped his cap to the former Pitt Panther after taking down the Colts in prime time.

“But today he balled out. I was just loving how he was so good situationally,” Daniel said, highlighting the Steelers’ efficiency on third down and in the red zone. He continued, “He looked really, really comfortable out there. Now this is the fifth-ranked Colts defense, they’re not some ‘mess around’ type defense. This is a great learning experience for him. He’s going to move on with a lot of confidence.”

The Saints chose to pass on Pickett with the No. 19 overall pick in this year’s NFL draft, instead selecting left tackle Trevor Penning. Pickett went off the board a few minutes later to the Steelers. Fast-forward to a few months later and he’s taking down the Saints in a 20-10 upset. So should New Orleans have some buyer’s remorse here? Or at least thoughts of what-might-have-been?

Probably not. Pickett’s struggles are well-documented, and his performance (3.98 adjusted net yards per pass attempt, which accounts for touchdown passes, sacks, and interceptions) has clocked in near the likes of Zach Wilson (3.86) and Blake Bortles (3.81) as some of the least-effective rookie quarterbacks to hit the field over the last decade. He very likely wouldn’t have been an upgrade over Jameis Winston and Andy Dalton had New Orleans picked him at No. 19 overall. If the Steelers hadn’t taken him there, he may have not been drafted in the first round at all.

Still, we’ll never know how it might have turned out otherwise. At this point all you can do is tip your hat to Pickett finding ways to win and hope Penning works his way into the starting lineup soon. The Saints’ offensive line hasn’t met expectations this season, and hopes are high for Penning — he’s more or less valued as their 2023 first round pick, with New Orleans having traded that selection to get the draft choice spent on him. Hopefully both players, Penning and Pickett, can go on to enjoy productive careers in the NFL.

A look at the AFC West standings and playoff picture after Week 12. 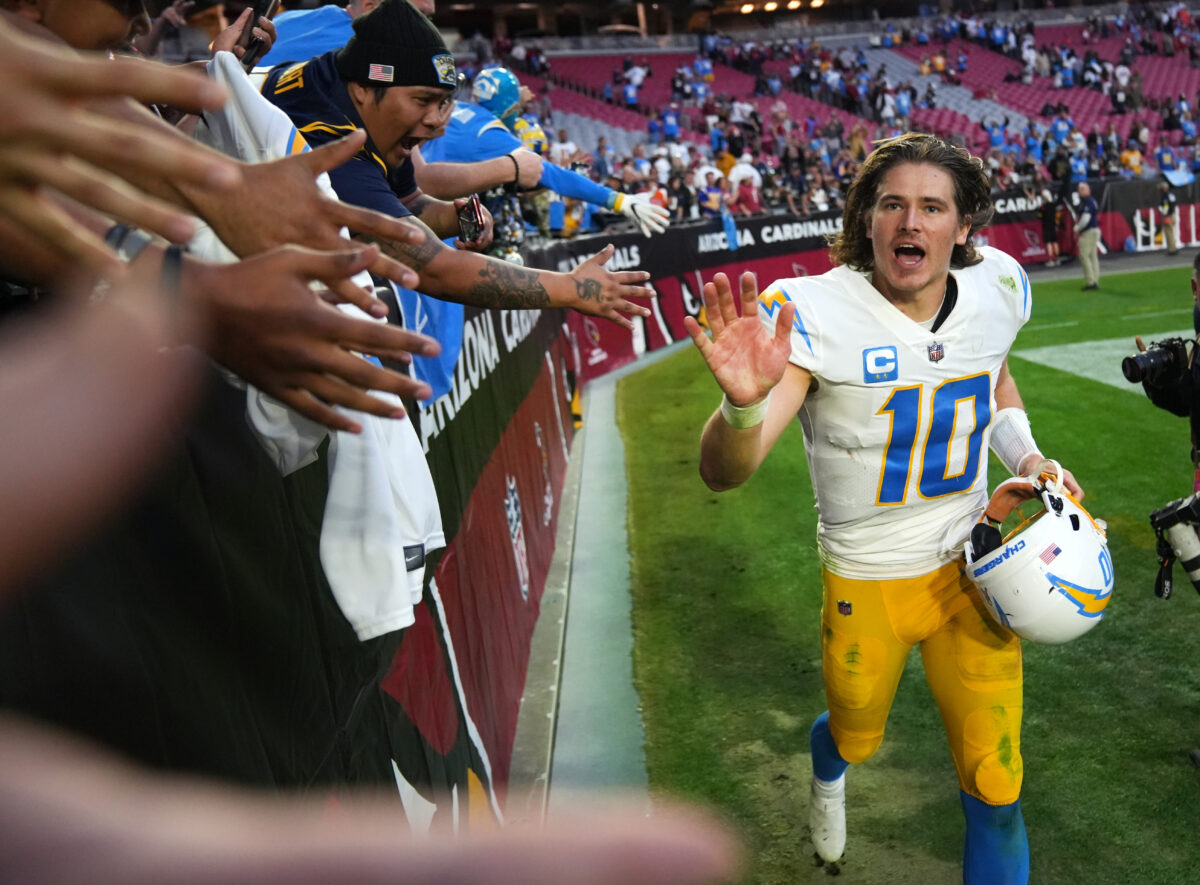 The Chargers improved to 6-5 after beating the Cardinals on Sunday.

After the win, how does Los Angeles stack up with the other teams in the AFC West?

Here’s a look at the division standings entering Week 13:

Chances of making the playoffs: 75%

Chances of making the playoffs: 58%

Chances of making the playoffs: 43%

Chances of making the playoffs: 45%

Chances of making the playoffs: 2%

A look at the AFC West standings and playoff picture after Week 11. 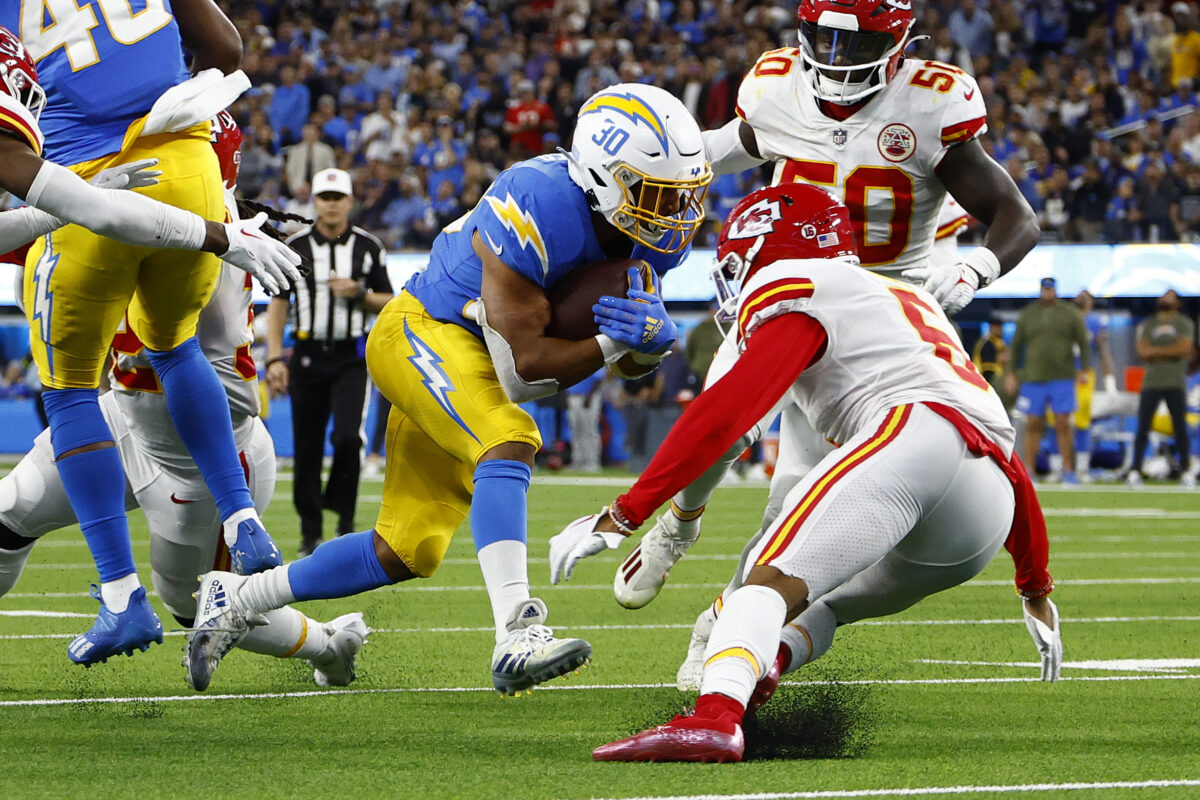 The Chargers fell to 5-5 after losing to the Chiefs on Sunday night.

After the loss, how does Los Angeles stack up with the other teams in the AFC West?

Here’s a look at the division standings entering Week 12:

Next four opponents: @ Titans, vs. Chiefs, vs. Browns, vs. Buccaneers

Next four opponents: vs. Bears, @ Vikings, @ Bills, vs. Lions

Next four opponents: @ Cardinals, @ Raiders, vs. Dolphins, vs. Titans

Next four opponents: vs. Steelers, @ Cowboys, @ Vikings, vs. Chargers

Frank Reich has to feel good about this one 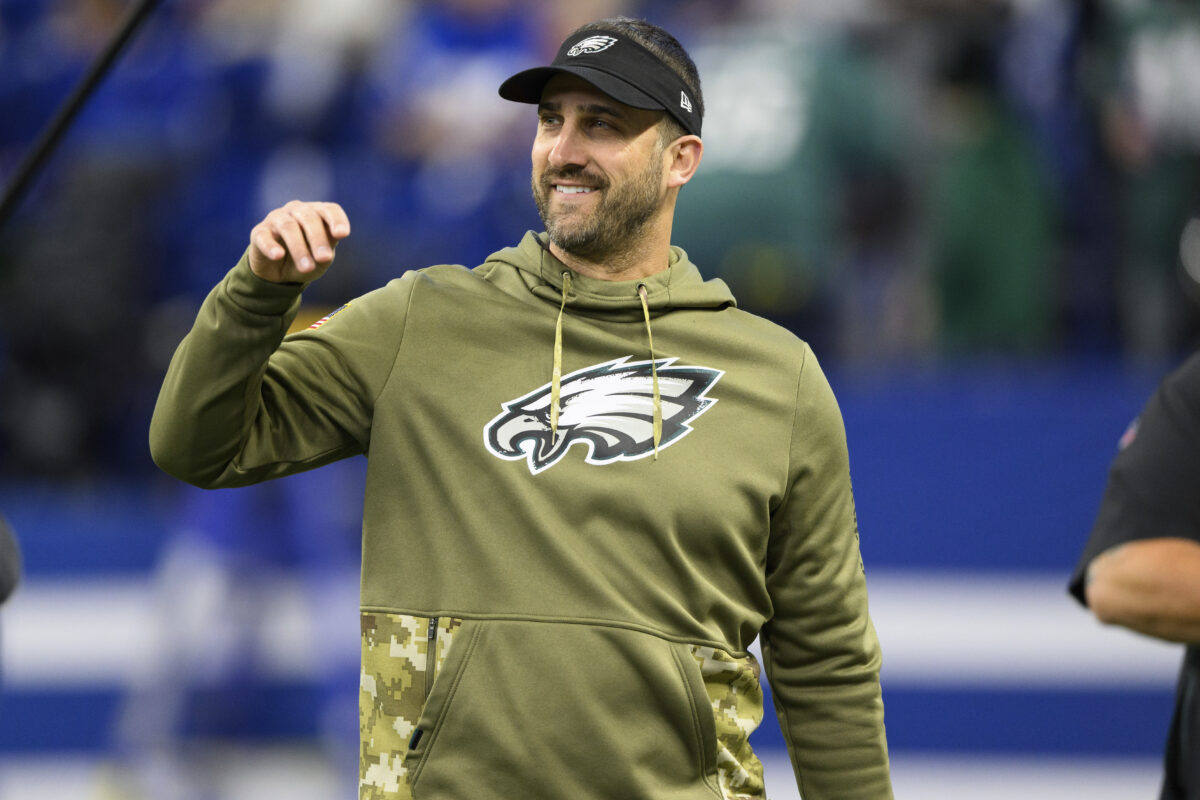 The Eagles were once the last undefeated team in the NFL, but over the last couple weeks they haven’t looked too great.

Their game against the Colts on Sunday was certainly a struggle. It was the first real controversy the team has overcome this season. They were down by 13 points in the 4th quarter with the offense sputtering. Then Jalen Hurts did Jalen Hurts things and they wound up winning 17-16.

The win had Nick Sirianni completely fired up. He bounced up and down the sidelines celebrating with Eagles fans and talking to Colts fans. This win clearly meant a lot to him.

The reason why is obvious. It was a win for Frank Reich, who the Colts fired a few weeks ago before bringing in Jeff Saturday. Sirianni coached under Reich in Indianapolis before coming to the Eagles.

That checks out. Sirianni absolutely loves Frank Reich. He said as much after the game.

Nick Sirianni was visibly emotional after this game.

"I'm emotional because I love Frank Reich," Nick Sirianni said. "He's one of the best damn football coaches I've ever been around. I was hoping he and I would be able to coach against each other in this game."

That’s where all that emotion is coming from.

Colts DE Yannick Ngakoue is the player of the game from the Week 11 loss against the Eagles. 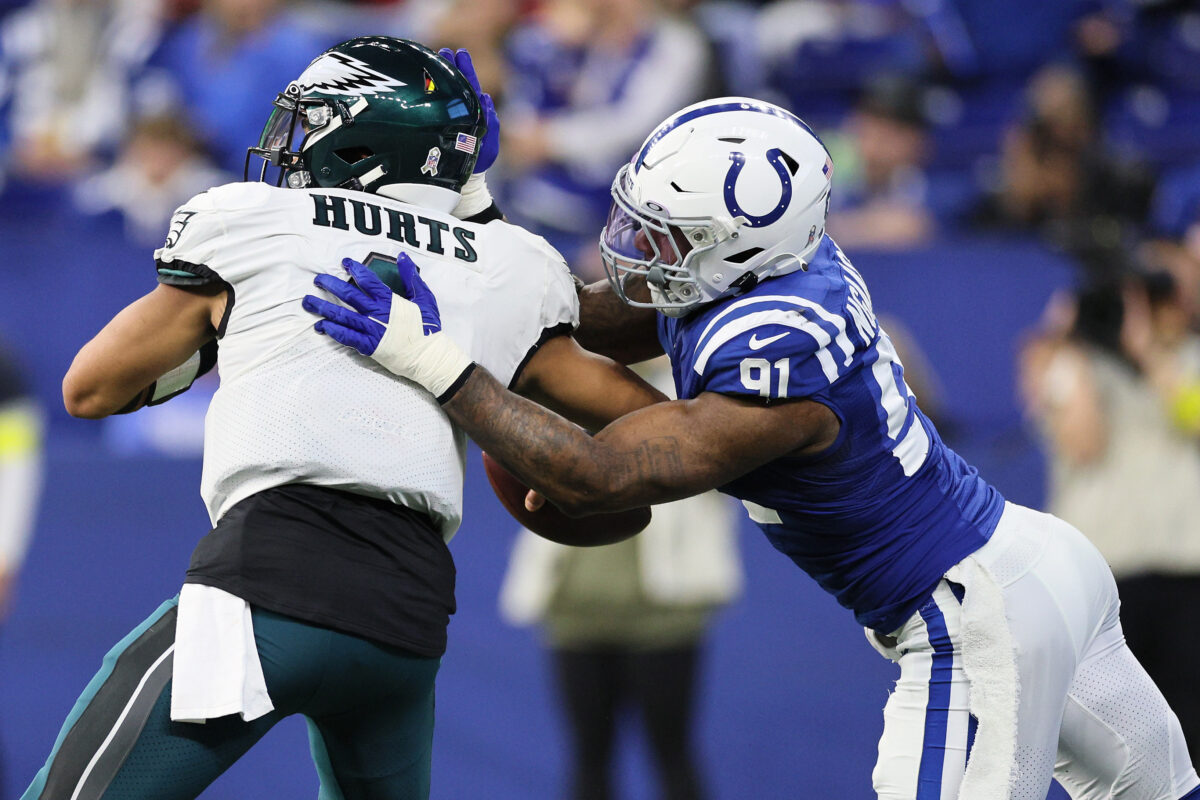 They almost had it.

Jeff Saturday almost did the impossible in beating the one-loss Philadelphia Eagles at home in a tough, hard-fought battle. The 17-16 final shows that this team’s ability to stay in games can help them going forward, especially on the defensive side of the ball.

The defensive end finished with 1.5 sacks on the day, combining with Zaire Franklin on the second. One of his sacks was a strip sack against Jalen Hurts.

Ngakoue continues to be a force on the edge and a leader for the relatively young defensive unit. Hopefully, he can keep going on that path as the Colts try to finish the season on a high note. 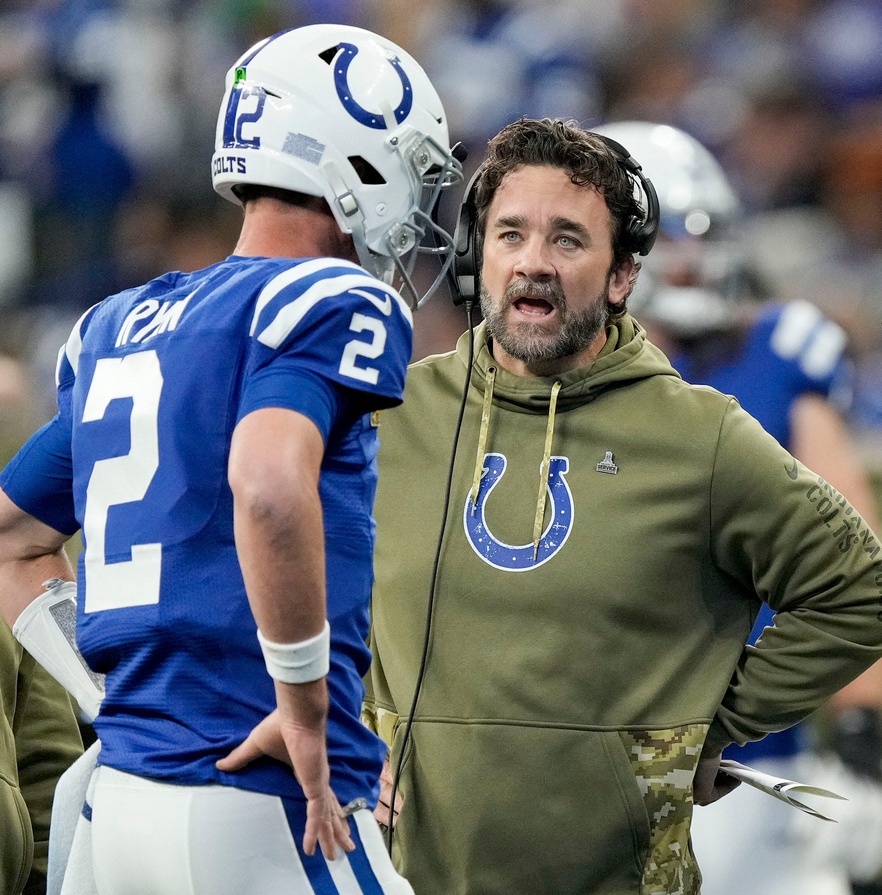 Your best pass rush shouldn’t come from your two new acquisitions, but that’s precisely what is taking place in Indianapolis for the Eagles.

Philadelphia secured their first sack of the afternoon against Matt Ryan and the Colts when Linval Joseph and Ndamukong Suh combined for the six-yard loss.

Ryan is 14-18 passing for 93 yards, while Jonathan Taylor used an explosive first drive to amass 69 yards on 13 carries and a touchdown through three quarters.

The Eagles trail 13-3 with less than seven minutes left in the third quarter, as a stagnant offensive unit has been unable to produce points on the road.

The Titans extended their AFC South lead with a Thursday night win. 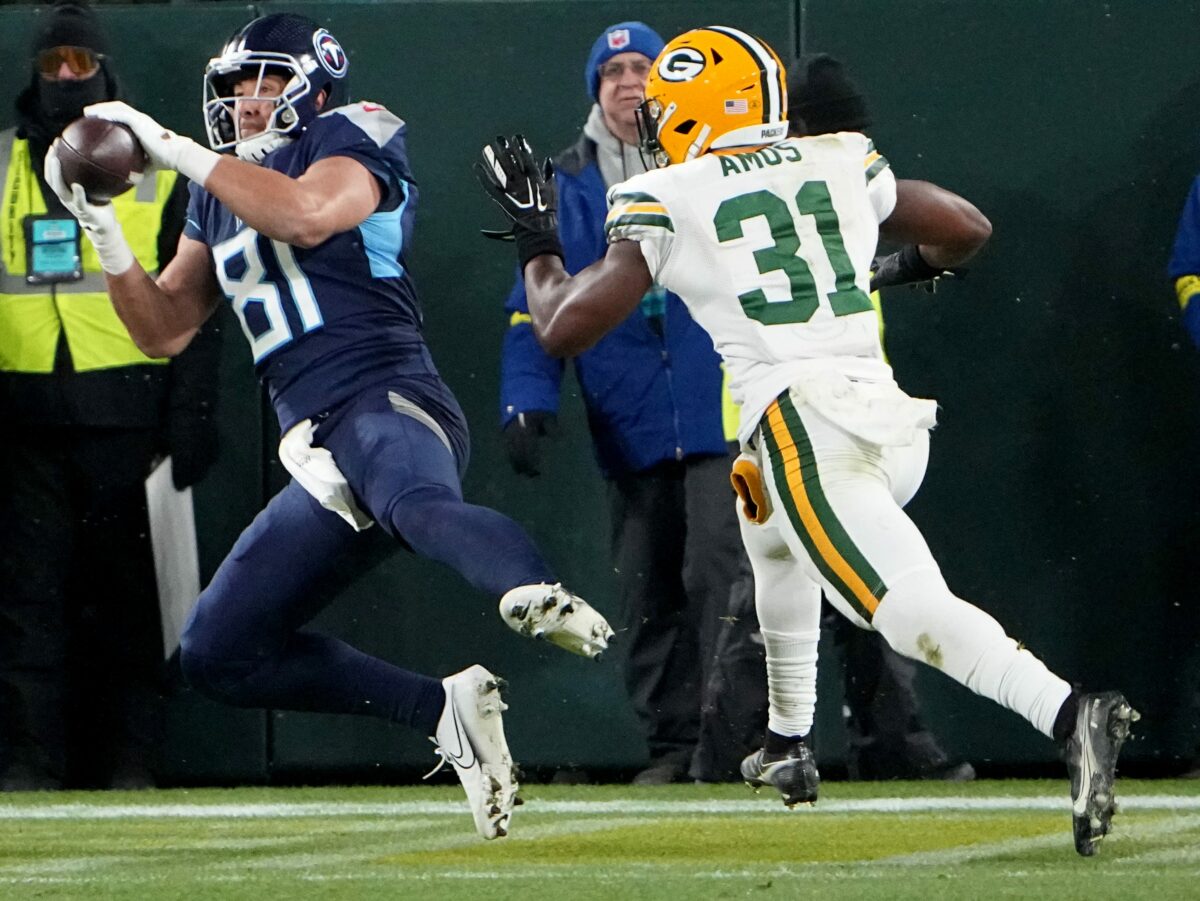 The Tennessee Titans extended their lead over the rest of the AFC South by beating the Green Bay Packers on Thursday night, 27-17.

Titans quarterback Ryan Tannehill threw for 333 yards with two touchdowns in the win, while the Packers were held to 271 yards of total offense. Green Bay was held scoreless on four fourth quarter possessions, ending any hope of a comeback.

On Sunday, the Indianapolis Colts will host the Philadelphia Eagles and the Houston Texans will host the Washington Commanders. After the Titans’ Thursday victory, here are the AFC South standings:

The Jaguars still have two games against the Titans on the schedule in the last seven weeks of the season, offering an opportunity to make up ground. However, Jacksonville will have no margin for error after the bye week.

In the last seven weeks, the Jaguars have home matchups against the Baltimore Ravens and Dallas Cowboys, as well as a road game against the New York Jets. All three of those teams are 6-3.

Jonathan Taylor is back. 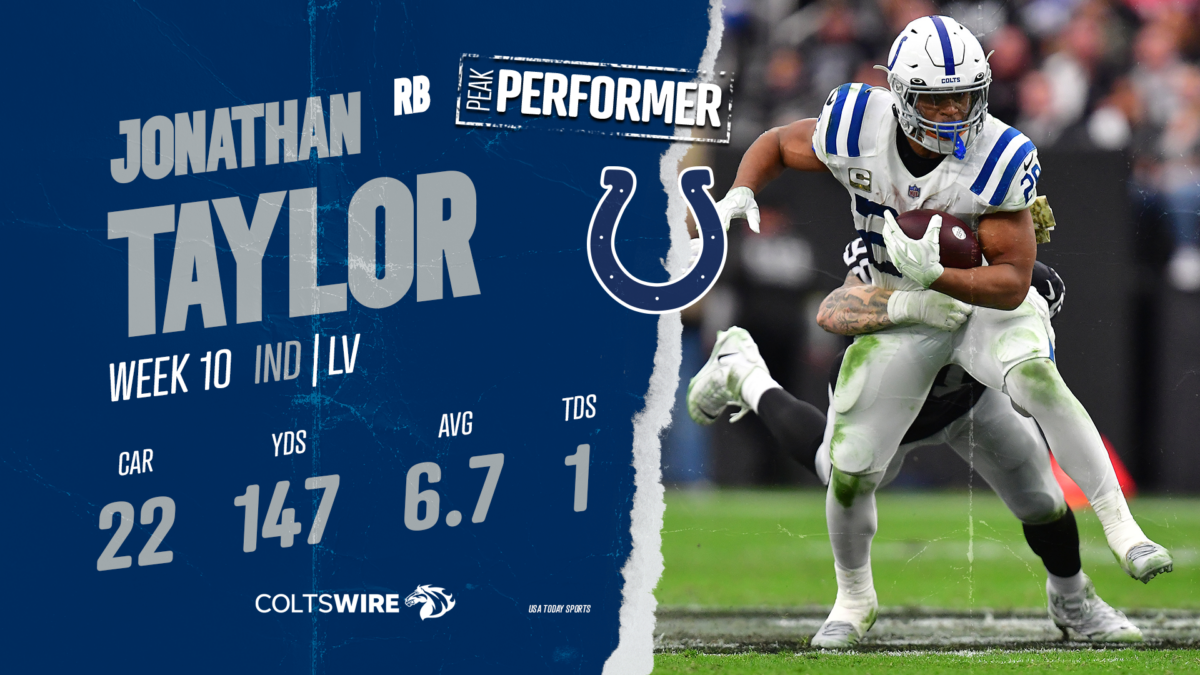 The Indianapolis Colts offense got a much-needed spark this week. Whether it was Jeff Saturday’s new approach or a simplified playbook, this team looked different in a good way en route to a 25-20 win over the Las Vegas Raiders.

One of the byproducts of the changes in leadership is Jonathan Taylor’s production which was on display today in Las Vegas.

The young, stud running back returned to his 2021 form, finishing with 147 yards and a touchdown. The score came late in the third quarter when Taylor burst through the line and was off to the races for a 66-yard scamper into the endzone. Having JT back and healthy is a valuable weapon this team is lucky to have.

The Colts now stand at 4-5-1 following the 25-20 win in Las Vegas. The season is not over, and it’s a welcomed sight to see the players still fighting and competing.

Call it the “Jeff Saturday effect”, but this team could be heading in the right direction at the right time.

The Jaguars dug their hole a little deeper Sunday. 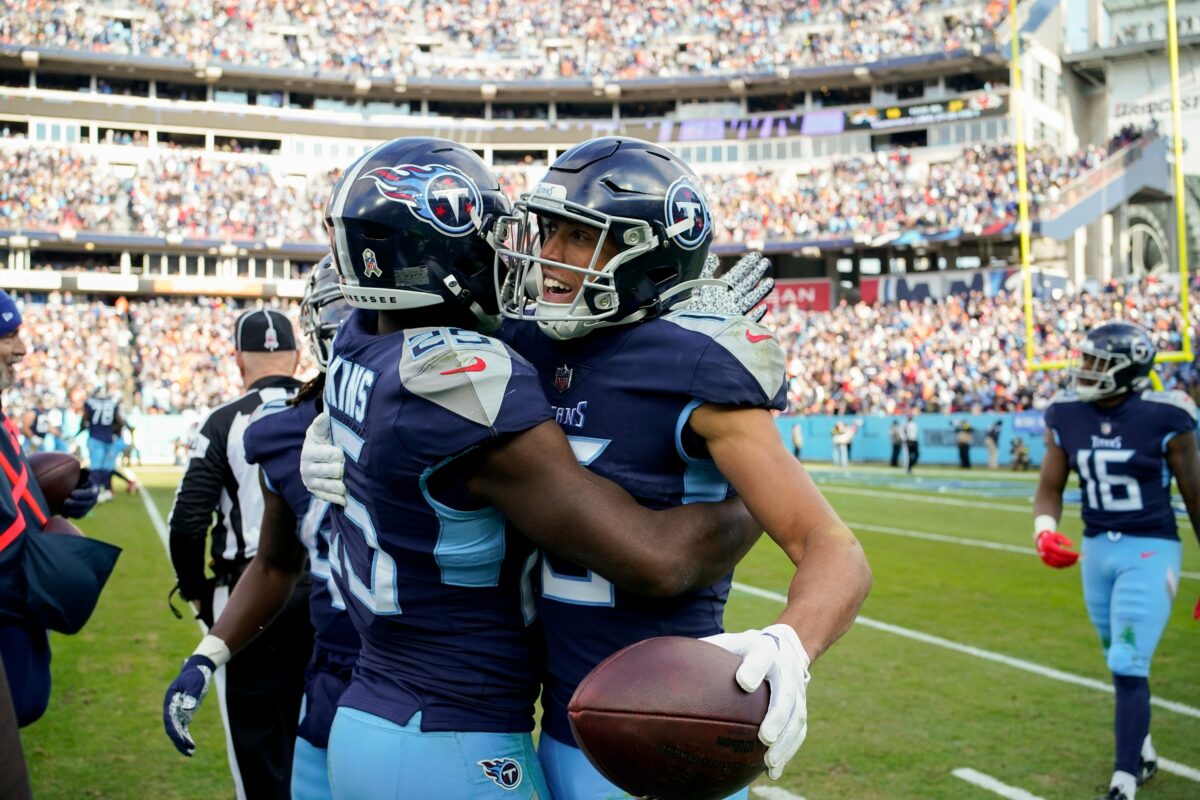 The Jacksonville Jaguars made up a game on the Tennessee Titans last week with a Week 9 win, but the Titans got that game back in Week 10.

Shortly after the Jaguars lost 27-17 to the Kansas City Chiefs in Week 10, the Titans picked up a win over the Denver Broncos. Tennessee trailed 10-0 just before halftime, but tracked down the Broncos with 17 unanswered points and a game-sealing interception in the final seconds of the fourth quarter.

The Houston Texans also lost in Week 10, dropping a road game against the New York Giants. The Indianapolis Colts’ won their away game against the Las Vegas Raiders later in the day to solidify their spot in second place.

Through 10 weeks, here is the state of the AFC South:

While the Jaguars still have two matchups against the Titans still on the schedule, the team will need to string together wins after their Week 11 bye to have any shot at tracking down Tennessee.

Keys to victory for Indy as they visit the Raiders in Week 10. 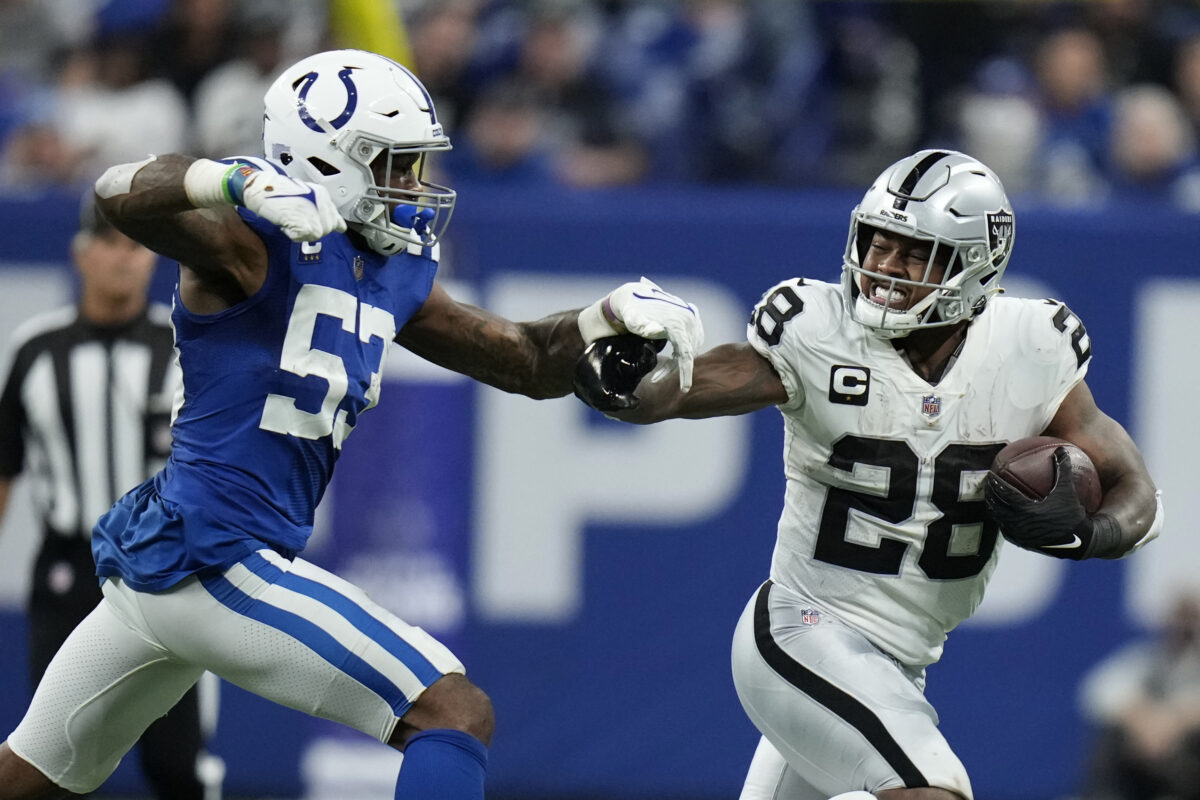 This week has been…interesting to say the least. The front office decided Frank Reich’s fate and fired the fifth-year head coach mid-way through the 2022 season.

Interim head coach and Colts legend, Jeff Saturday, will now take over with no college or professional coaching experience. Anybody who knows what will happen on Sunday in Las Vegas is a liar, and this team will have to shut out the noise and bounce back quickly.

The good news? Josh McDaniels and his squad are currently 2-6 on the year and have a knack for blowing games down the stretch. This will still be a challenge for this Colts team, but this mountain is not impossible to climb.

Here are the keys to victory for Jeff Saturday in his NFL coaching debut: