The New York Giants ruled seven players out against the Green Bay Packers in Week 5, including QB Tyrod Taylor and three wide receivers. 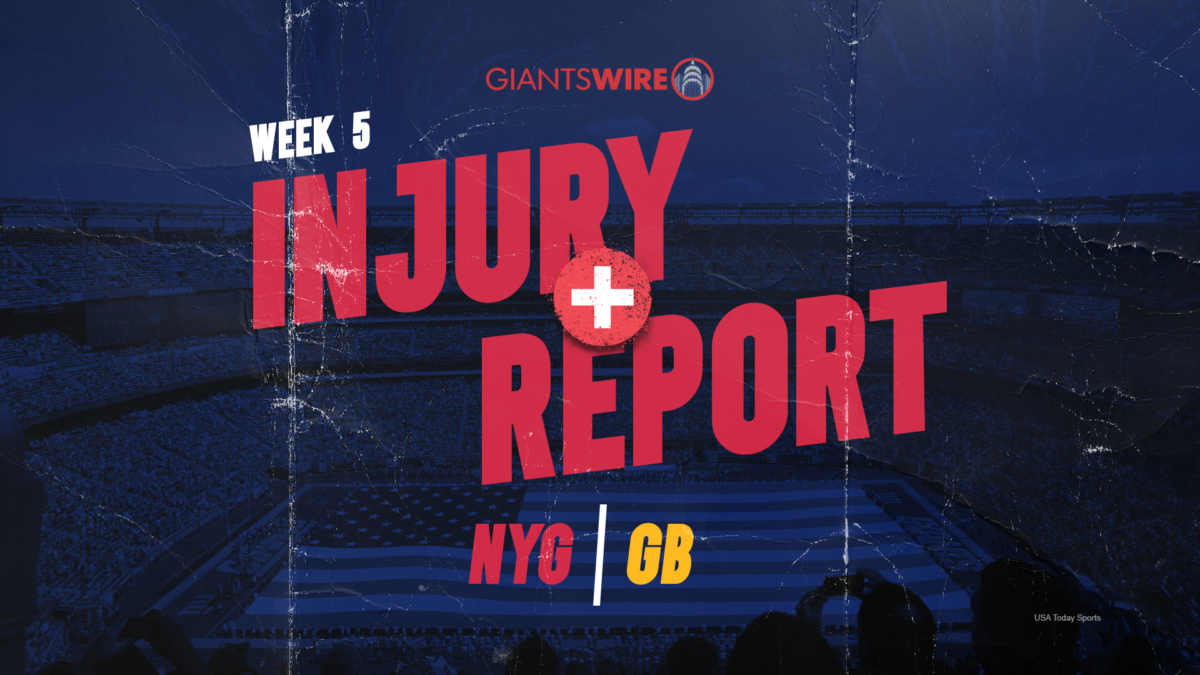 The New York Giants visit the Green Bay Packers on Sunday in London and will do so down a number of players.

Earlier in the week, cornerback Aaron Robinson was placed on injured reserve (IR) and then on Friday, the team ruled out an additional seven players.

Among them is backup quarterback Tyrod Taylor (concussion), meaning Davis Webb will get activated from the practice squad.

On the plus side, safety Julian Love cleared concussion protocol and will play, and defensive lineman Leonard Williams inched closer to his return. However, he said he’d like a full practice before he steps back onto the field and was limited on Friday.

Note: Henry Mondeaux is on the team’s practice squad so it’s unclear why he’s being listed on the final injury report.

Full injury reports for both the Giants and Packers can be found below:

New York Giants rookie Kayvon Thibodeaux feels “it’s time” for his first sack and would love it to come in London against Aaron Rodgers. 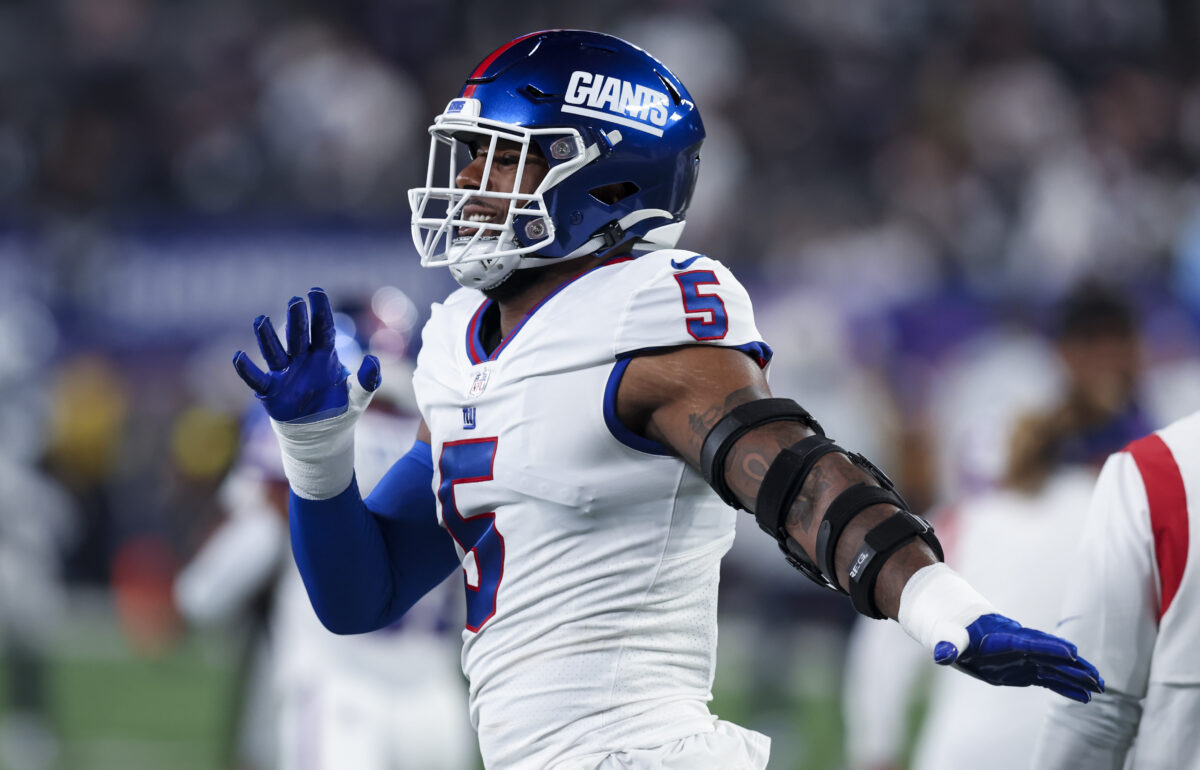 New York Giants rookie edge rusher/linebacker Kayvon Thibodeaux is not off to the greatest of starts. As the Giants head into their Week 5 game against the Green Bay Packers in London this Sunday, Thibodeaux is still seeking his first NFL sack.

If Thibodeaux does get that sack this Sunday, it will come against future Hall of Famer Aaron Rodgers.

“Obviously he’s a great player,” Thibodeaux told reporters on Thursday. “He’s probably one of the G.O.A.T.’s in my era. I would say he’s a playmaker. I’m just going to have to stick to my keys, stick to my fundamentals, and trust my eyes.”

Green Bay is allowing 2.3 sacks per game this season but have tightened things up the past two weeks, giving up just one sack over the past two games.

It hasn’t helped that Thibodeaux missed the Giants’ first two games with a knee injury. He has slowly been getting ramped up but also points out that the Giants played against mobile quarterbacks the past two games and his sack opportunities were limited.

Against the 38-year-old Rodgers, Thibodeaux believes his chances are fairly good.

“Yeah, you know it’s time,” he said. “I feel like it’s overdue and hopefully the time comes, God willing, on Sunday. . . For me, I would feel the best getting it because it’s in London and it will be an international game. I think that will be cool. When I go against an opponent, I try to just keep that mindset as a nameless, faceless opponent.”

The Giants are actually relying on Thibodeaux to get things goings especially  with teammate Azeez Ojulari out this week.

The New York Giants square off in a Sunday morning battle against the Green Bay Packers in Week 5. Here are three reasons for concern. 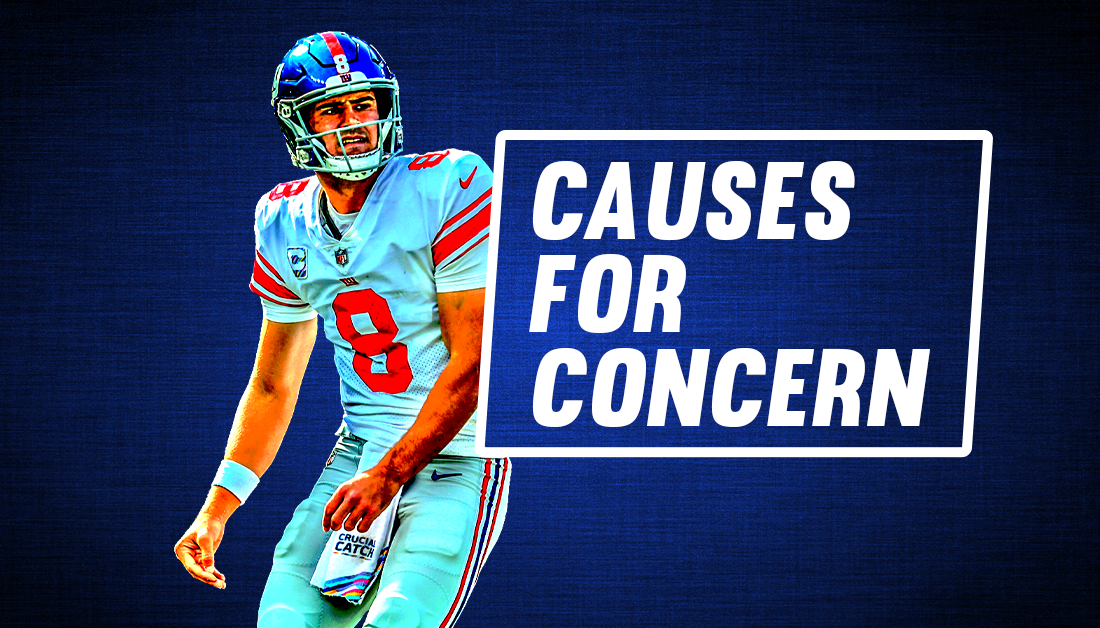 The New York Giants and Green Bay Packers will head across the pond to face off in London as a part of the NFL’s international series in Week 5.

Although both teams enter the game sporting a 3-1 record, most believe the Packers are contenders while considering the Giants as pretenders.

The Packers are the Giants’ toughest opponent of the season thus far, so it is no surprise Green Bay are favored by over a touchdown headed into the weekend.

The Giants are also decimated by injury so we will see who plays on Sunday.

As the Giants prepare for Aaron Rodgers and the Packers, here are three causes for concern going into Week 5.

New York Giants WR Kadarius Toney, who will miss the team’s Week 5 game, now has injuries to both of his hamstrings. 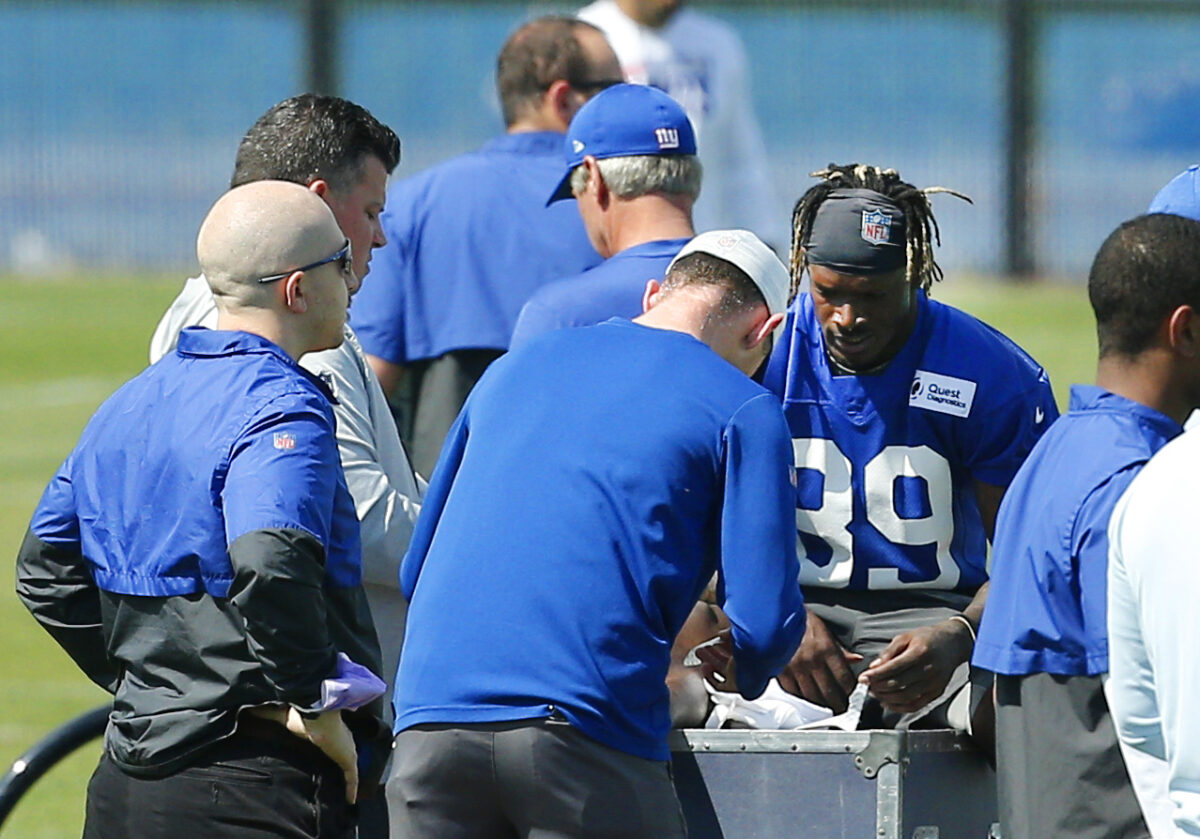 New York Giants wide receiver Kadarius Toney (hamstring) returned to practice on Wednesday and there was some hope he was finally on the mend.

To the surprise of many, Toney was once again sidelined. The belief was that he had re-injured his hamstring but that turned out not to be the case. Rather, the second-year wideout had injured his other hamstring, giving him two flat tires.

Head coach Brian Daboll made the reveal on Friday in London.

Kadarius Toney tweaked his hamstring on Thursday. It’s the other hamstring now, Brian Daboll says. So that’s why he’s not here & out again. #Giants

For Toney, the latest hamstring injury is actually his third of the year. He had previously been sidelined after tweaking the same hamstring he injured again on Wednesday.

This is a mess for Kadarius Toney and the Giants. Toney told me the other day the previous hamstring problem was different from the one this summer. So 3 different hamstring injuries already this season. 🤦‍♂️ https://t.co/ALlhvxAgbR

Frustrated by the injuries and talk about his injuries, Toney vented his frustration via Twitter on Friday morning as he teammates practices across the pond.

Toney missed seven games due to injury during his rookie season and Sunday will mark the third game he’s missed here in 2022. And with two bad hamstrings, it’s unlikely the Giants will get him back onto the field any time soon.

See who experts around the league are taking in a Week 5 matchup between the New York Giants and Green Bay Packers. 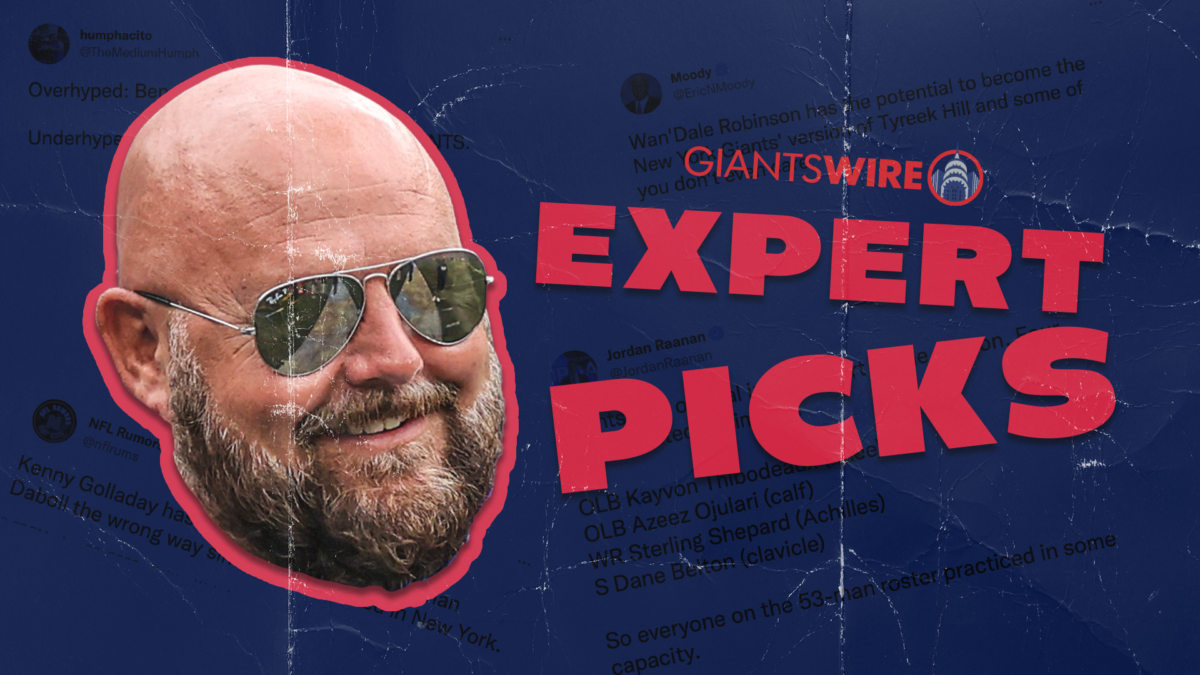 Opening the week, the Giants were listed as 7.5-point road underdogs and that’s where the spread remains as of this writing.

Let’s take a look at who some of the experts and insiders around the league are taking in the Week 5 matchup:

This game may be the most lopsided of the entire season so far in terms of expert picks. Not only is the above panel completely in Green Bay’s favor, 99% of all expert picks favor the Packers, according to NFL Pickswatch.

Fans give the Giants only slightly better odds with 3% picking Big Blue to come away with the upset in London.

Score predictions seem to be all over the map with some, like Vinnie Iyer, expecting the Giants to be blown out of the water. 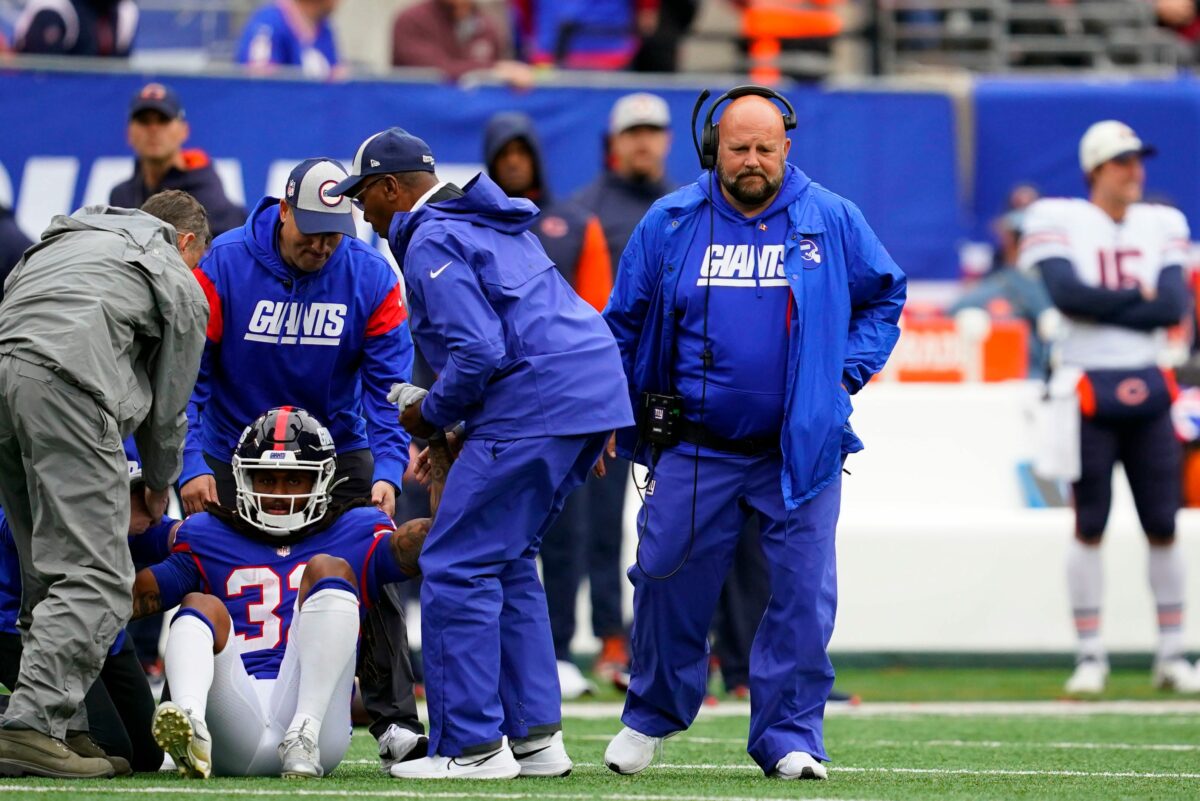 New York Giants cornerback Aaron Robinson has had a less than ideal start to his professional career. After missing several games due to injury during his rookie season, he returned in 2022 poised to start alongside Adoree’ Jackson.

But again, Robinson has been hamstrung by injury.

Following a Week 1 victory over the Tennessee Titans, Robinson underwent an emergency appendectomy that kept him out two weeks. He returned in Week 4 against the Chicago Bears but was quickly lost to a knee injury.

The Giants placed Robinson on injured reserve and on Thursday, head coach Brian Daboll left open the possibility that the cornerback’s season is over.

Not overly encouraging for either. #Giants

The mere fact that Daboll entertained the idea of Robinson’s season being over means two things. One, the injury is obviously serious. And two, the second-year corner is a long way off from returning if he does.

That leaves the already thin Giants even more thin at cornerback for the foreseeable future.

The New York Giants left five players behind on their trip to London, including WR Kadarius Toney and LB Azeez Ojulari. 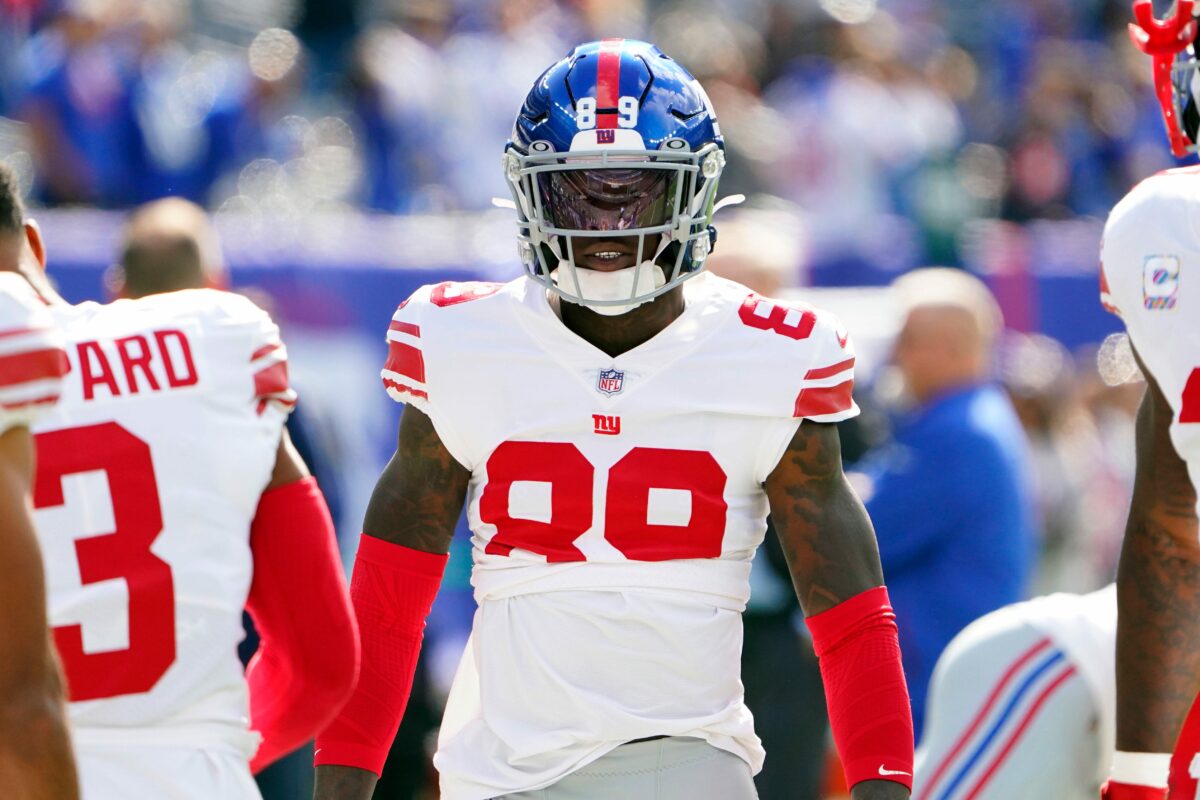 The New York Giants won’t release their final Week 5 injury report until later on Friday, but we already know several players who will be ruled out.

Toney had participated in practice on Wednesday but was immediately shut down after. He will now miss his third consecutive game.

The news on Golladay also isn’t a surprise. He suffered a sprained MCL against the Chicago Bears and Daboll recently said he’s out indefinitely.

Ojulari might be the most concerning loss for the Giants come Sunday. He had been playing impactful football since his return, making his presence felt in a number of ways.

It remains unclear how much time Ojulari is expected to miss.

The good news for Big Blue is that both quarterbacks, Daniel Jones (ankle) and Tyrod Taylor (concussion), made the trip. Safety Julian Love (concussion) also appears to be trending in the right direction. 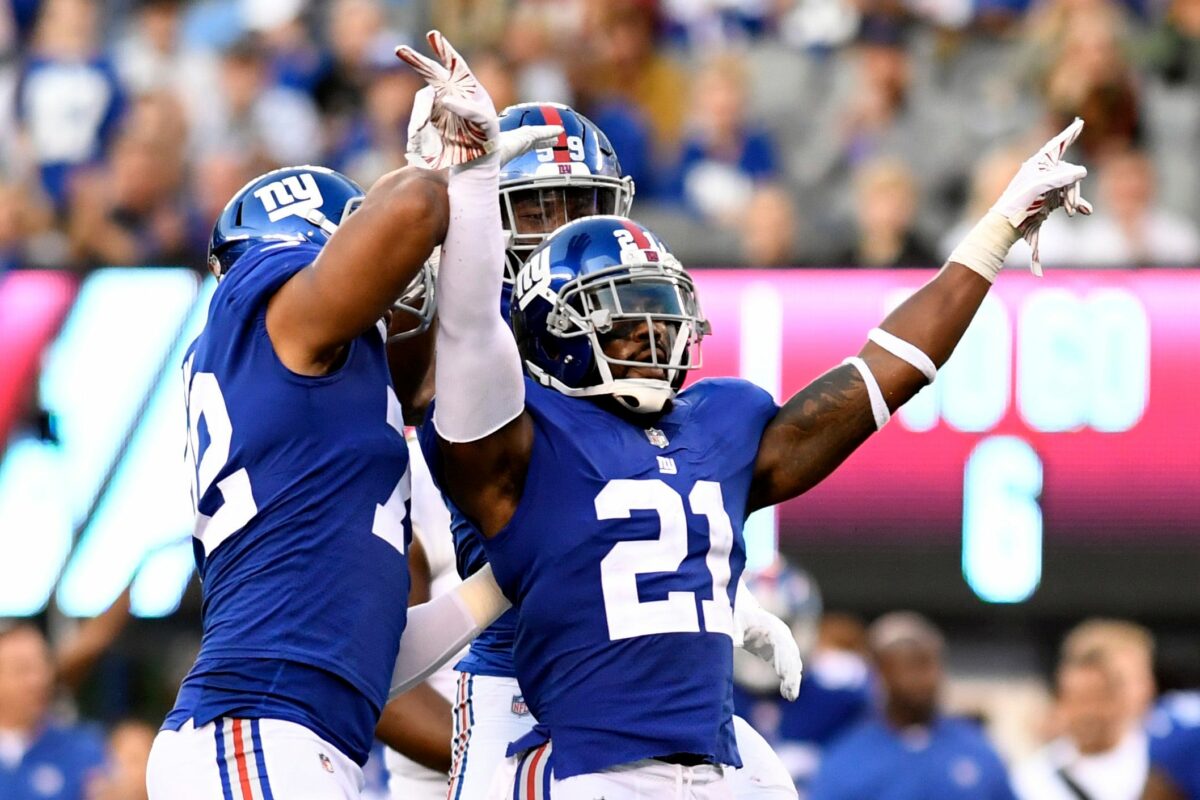 The once hard-hitting Alabama safety inked a new deal with the New York Giants on Thursday morning. He once played for the Giants from 2015 to 2018.

Collins, the Louisiana native, spent three seasons at Alabama. He was a unanimous All-American during his junior season in 2014. He was a key part of Alabama’s first College Football Playoff appearance in 2015 against Ohio State.

Following the season finale, he declared for the 2015 NFL Draft and was drafted No. 33 overall by the New York Giants. Collins would spend four years with the organization before signing as a free agent with the Washington Commanders.

Now, he will reunite with the Giants once again. He is scheduled to join the team in London but isn’t expected to play this weekend against the Green Bay Packers. It will be an interesting reunion considering how his free agency unfolded in 2018 when he chose to sign with a division rival.

The New York Giants are reuniting with 2015 second-round pick Landon Collins after he spent three seasons in Washington. https://t.co/GKnnEBWP0D

Roll Tide Wire will continue to follow Collins’ professional career as well as other former Alabama players in the NFL.

While the news on New York Giants QB Daniel Jones is positive, the same can not be said for WR Kadarius Toney who regressed in 24 hours. 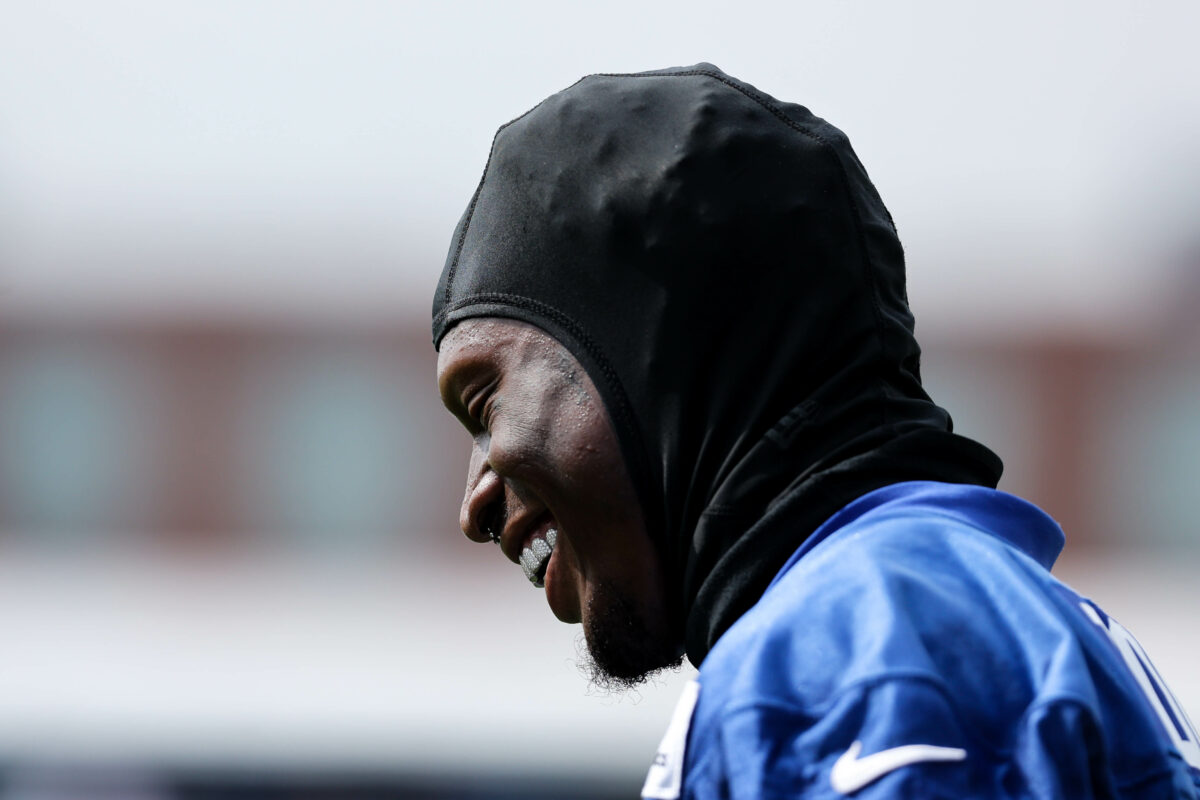 The New York Giants took the practice field in East Rutherford for the final time before jetting off to London on Thursday. And once again, quarterback Daniel Jones was participating and looked good to go against the Green Bay Packers.

The same could not be said for wide receiver Kadarius Toney, however. One day after returning to practice, the 2021 first-round pick was sidelined with injury. He seems unlikely to play on Sunday.

On the plus side, safety Julian Love and wide receiver Richie James Jr. returned to practice.

The Giants’ Thursday injury report can be found below:

This week on the Giants Wire Podcast, we preview the New York Giants-Green Bay Packers in London and talk Dave Gettleman’s GM tenure. 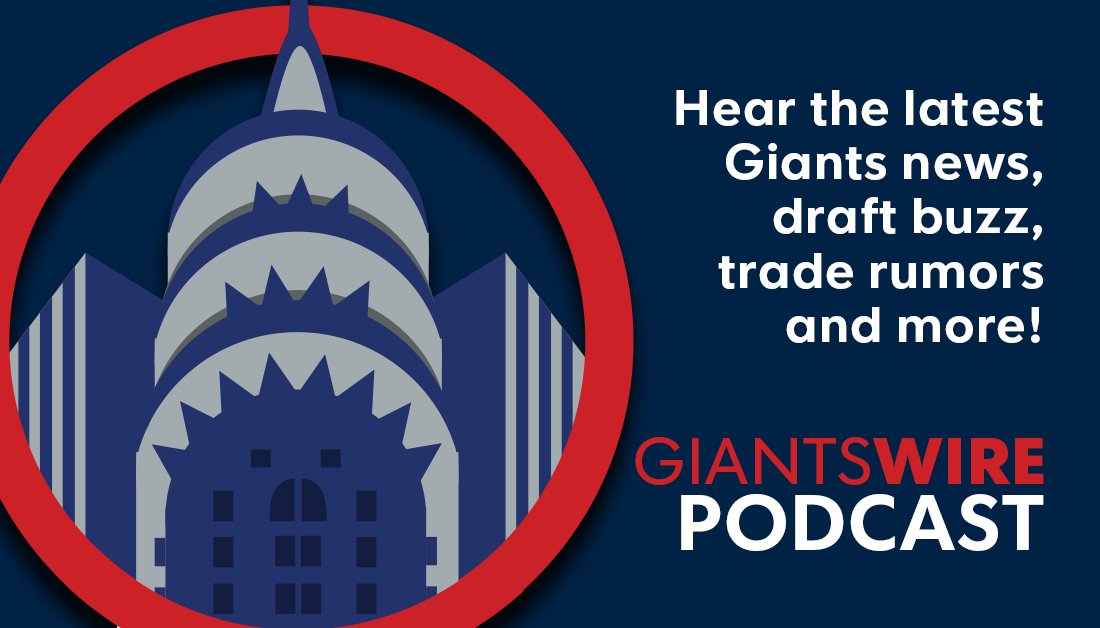 This week on the Giants Wire Podcast, we break down the best and worst moves made by former New York Giants general manager Dave Gettleman. It was bad, but was it the worst run by a Giants GM ever?

We also discuss the Giants heading over to London to take on the Green Bay Packers while once again being hit with the injury bug. Can they possibly upset Aaron Rodgers & Co.?

Those topics (and more) are discussed in the latest episode of the Giants Wire Podcast, which is hosted by Ryan O’Leary (@RyanOLearySMG on Twitter) and joined by site editor Dan Benton (@TheGiantsWire).

The Giants Wire Podcast will air every week during the regular season and occasionally throughout the offseason. You can listen below:

Don’t forget to use our playlist to enhance your listening experience: