An early betting preview of the upcoming action in the NFL. 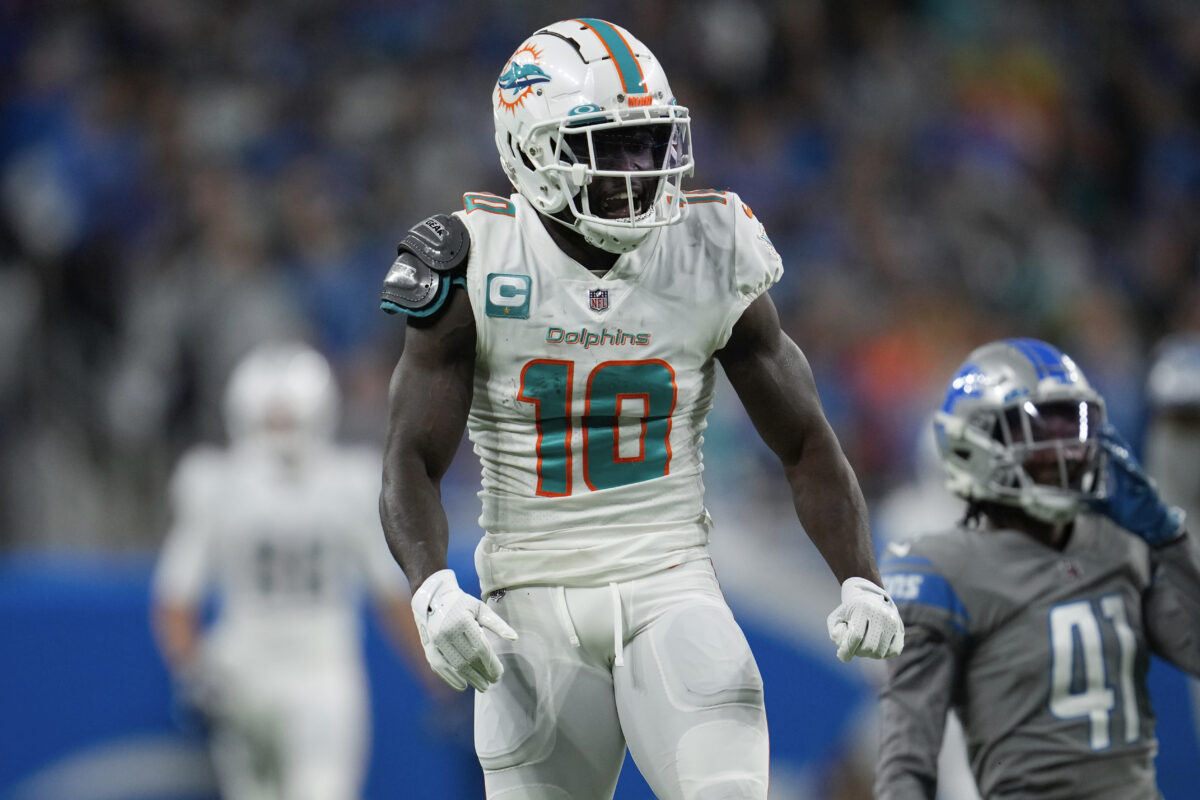 If you’re coming here looking for picks, that’s not what this is. We’ll get to those later in the week.

This right here is an early betting preview of the upcoming action in the NFL, with a first impression of each game and betting line, with a few trends and hints sprinkled in. Sometimes, bettors can overthink things and talk themselves out of making the right pick. So these are just baseline thoughts before we take a deeper dive into the numbers later in the week.

Spreads and over/under numbers are from BetMGM and likely to change after this is published.

The Warriors are rolling, and Curry is the reason why. 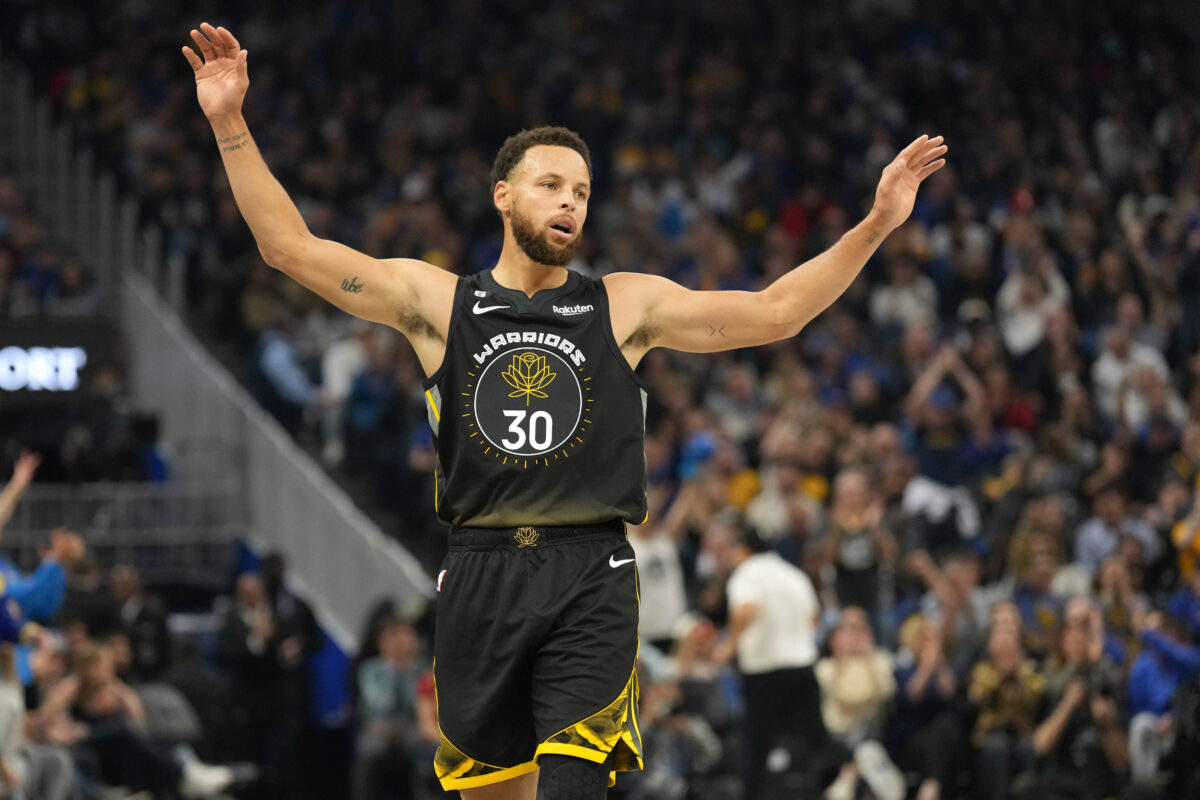 I am so happy the Golden State Warriors are winning again, because it would have felt criminal to leave Stephen Curry off another MVP ladder…but I absolutely would have done it.

There are so many players performing at a high level right now, and many of them are playing for teams that simply aren’t winning much. It makes you wonder how low the win threshold can get for an MVP. But I’m a firm believer that the MVP has to do a reasonable amount of winning (sorry SGA).

I also believe over time, the cream rises to the top. So I was never worried that Curry wouldn’t eventually crack this list, just like I’m not worried about Joel Embiid’s inevitable return with more games under his belt.

I am worried about Luka Doncic, however. His numbers remain otherworldly, but he fell a few spots on this ladder because the Mavericks are skidding. I’m afraid they may not be good enough for him to stay afloat for long. Here’s where things stand today, with odds from BetMGM.

There’s believing, and then there’s BELIEVING. 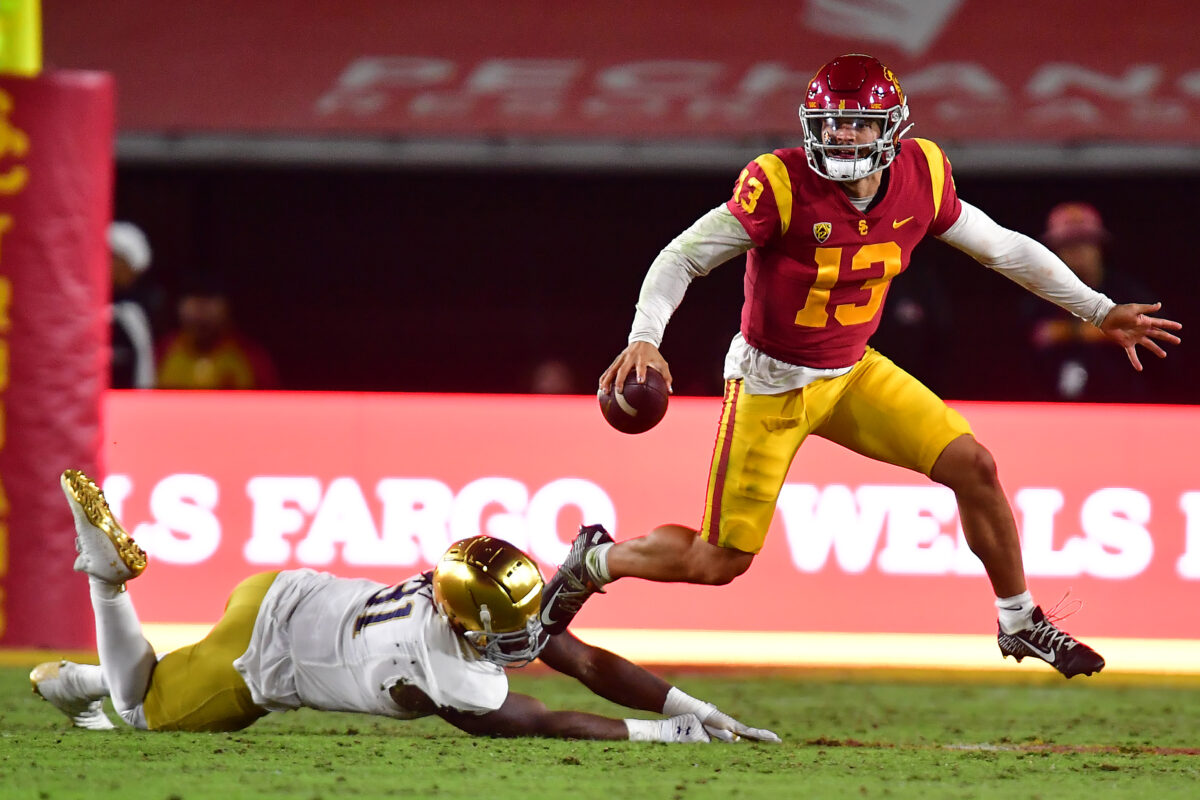 If you’re confident in No. 6 USC’s ability to beat No. 14 Utah in the Pac-12 conference championship game on Friday, you’re probably not as confident as at least one other person.

That person is a Caesars Sportsbook bettor who put a wager of more than $900,000 on the USC moneyline at -130 odds, according to Caesars writer Max Meyer.

The exact amount is incredibly specific, but the potential earnings are nonetheless massive at more than $690,000. Even larger is the potential loss if Utah is somehow able to pull off the upset — a result that would all but put an end to USC’s College Football Playoff dreams.

The biggest football bet of the season at @CaesarsSports, NFL or college, came in yesterday… and it's on USC.

Looks like someone is a big believer in USC reaching the CFP.

The Trojans are just a three-point home favorite at BetMGM. But an upset doesn’t seem like a possibility in the eyes of this bettor.

According to Meyer, it’s the largest bet of the NFL or college football seasons at Caesars.

Even with a win, USC would still likely need help to climb into the top-four of the CFP rankings. But a win is a must to keep hope alive.

The Bengals look better than Baltimore, but their remaining schedule will make it tough to win the division. 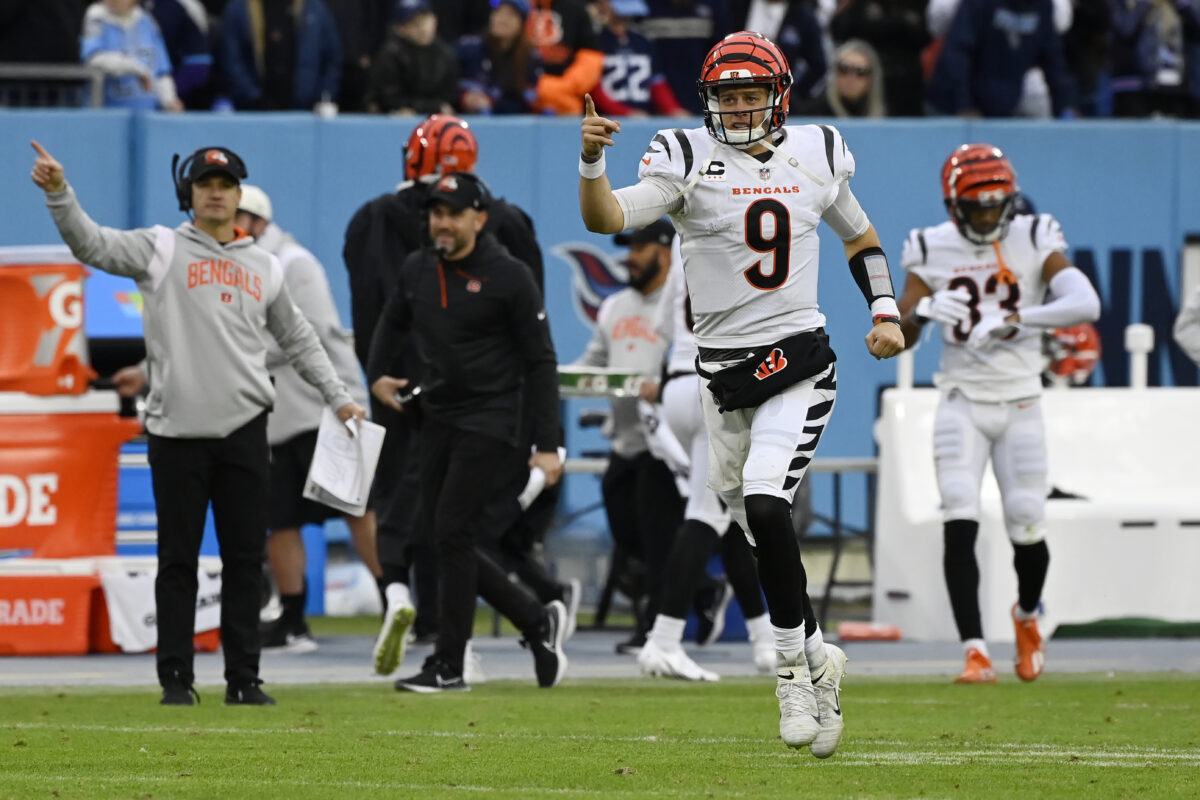 Even after a disappointing loss to the Jacksonville Jaguars on Sunday, the 7-4 Baltimore Ravens own first place in the AFC North thanks to a tie-breaker over the Cincinnati Bengals, who they beat in Week 5. BetMGM gives Baltimore the best odds to win the division at -250.

But the Bengals are on a three-game winning streak after beating the Tennessee Titans on Sunday, and that win might’ve been the most impressive of the season between the two division rivals considering Cincinnati was without star receiver Ja’Marr Chase and running back Joe Mixon.

Though Cincinnati’s remaining cast of offensive weapons might have still been better than what Lamar Jackson and the Ravens had to work with, you can only expect Cincinnati to get better with health. You can’t say the same for Baltimore.

Yet, despite similar records, the Bengals remain relative long-shots to win the AFC North at +210 odds. The reason is because of a tough remaining schedule that includes the Chiefs and Bills.

But if the Ravens continue to struggle against teams like the Jaguars — their best win during a recent four-game streak was over the 5-6 Bucs — Cincinnati’s remaining schedule won’t matter. The AFC North could very well come down to the final week of the season when the Ravens and Bengals play again, in Cincinnati. And right now, I would pick the home team to win that game.

The #Chiefs are favored against the #Bengals on the road in their Week 13 rematch of last year’s AFC title game. 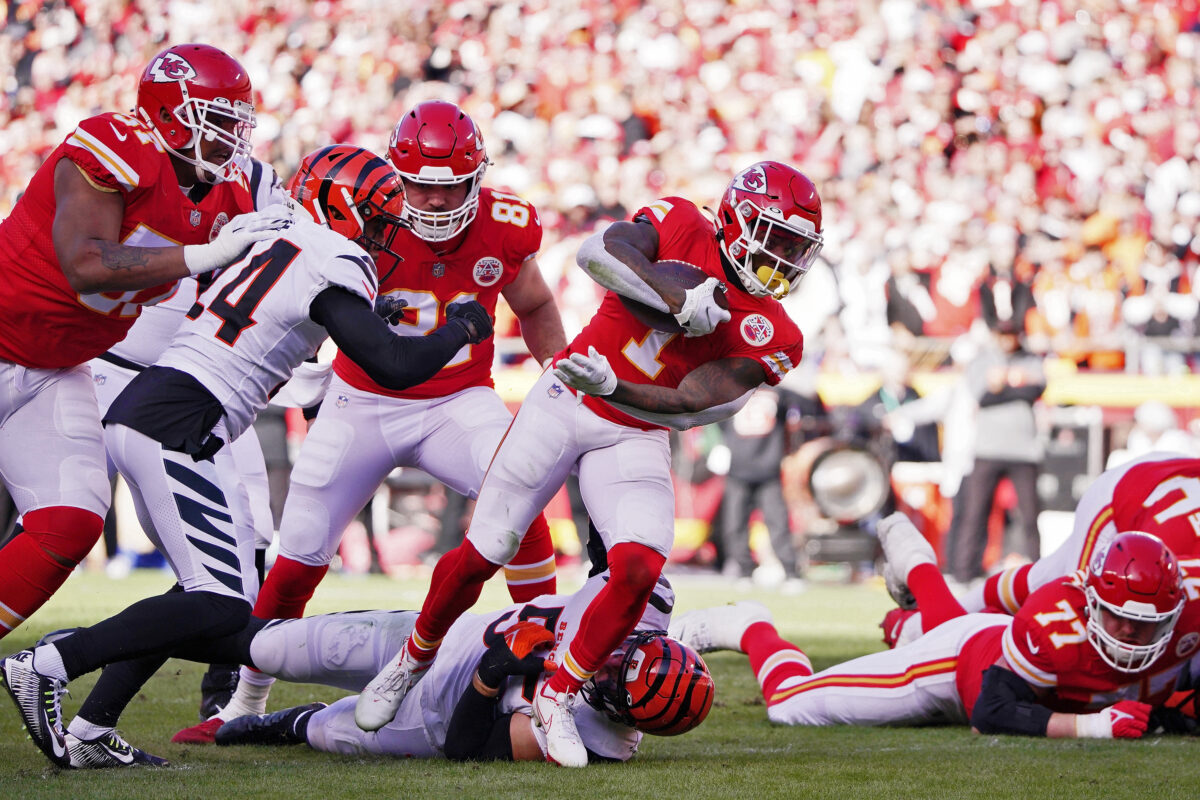 The Kansas City Chiefs have opened as road favorites against the Cincinnati Bengals in Week 13.

According to Tipico Sportsbook, Kansas City (9-2) are 2.5-point favorites over Cincinnati (7-4) next Sunday. The over/under point total is set at 51.5 points scored. The money line is now -135 for the Chiefs, giving K.C. a 57.45% implied win probability. Keep in mind this Kansas City team is now 4-6-1 against the spread this season and they’re also 5-6 on the over/under point total.

The Chiefs can beat the other half of Super Bowl LVI with a win over the Bengals in Week 13. This is a rematch of last year’s AFC title game — a game that Kansas City’s finest players have thought about often this season. They’re going to have a little extra motivation coming into this game as they look to avenge last season’s disappointing loss.

Cincinnati is on a three-game win streak after some struggles to start their season. They’re expected to get WR Ja’Marr Chase back from a hip injury after missing the past four games. They could also get RB Joe Mixon back after he missed Week 12 with a concussion. Overall, this should be a pretty evenly-matched game and perhaps one of the more competitive matchups left on the Chiefs’ regular-season schedule.

For more information on the rest of the NFL and college football, please check out our sister site, Sportsbook Wire.

The Tigers are more than a two-score underdog against undefeated UGA on Saturday, per BetMGM. 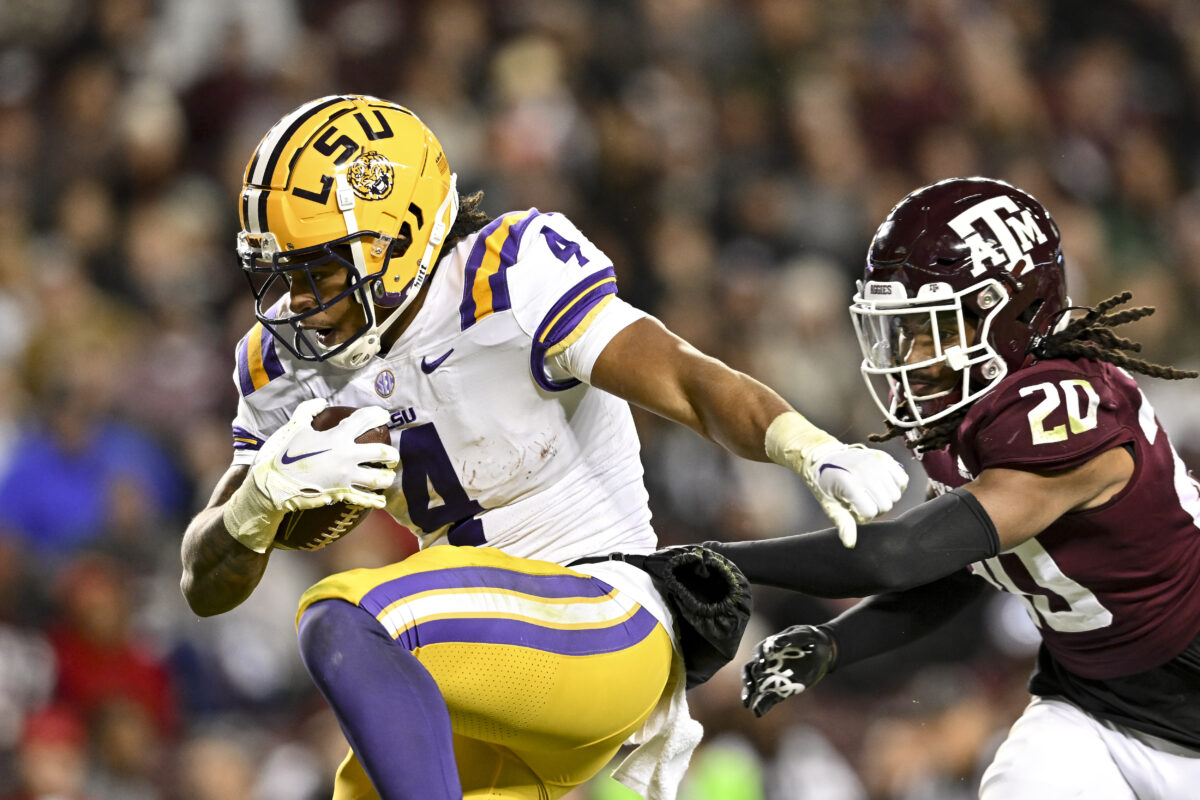 The Tigers ended the regular season on a low note, losing on the road to Texas A&M in a game that all but ended their outside shot at making the College Football Playoff as a two-loss team.

Now, instead of entering Saturday’s SEC Championship against Georgia with a lot at stake, LSU will only be playing for bragging rights within the conference — and to play spoiler for the Bulldogs’ perfect season, though they’ve likely clinched a CFP spot regardless of the outcome of this one.

The defending national champions are looking to do something they didn’t do during last seasons run by capturing an SEC title, while [autotag]Brian Kelly[/autotag] and the 9-3 Tigers hope to stand in their way.

LSU heads to Atlanta for a 3 p.m. CT kickoff on Saturday against UGA. We’ll give you the latest point spread, money line odds and over/under number, as well as the information you’ll need to make the smartest bet at BetMGM.

Our prediction and best bet for Monday’s Thunder vs. Pelicans game, with odds from
@BetMGM 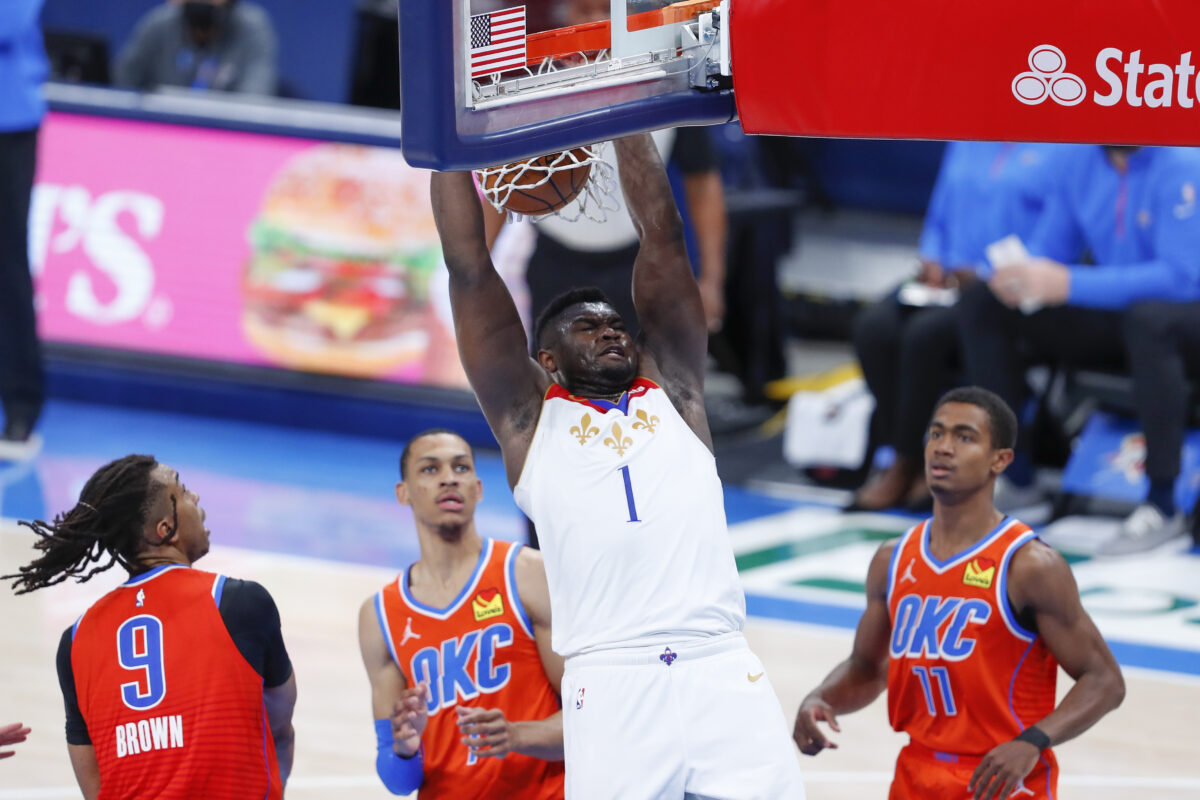 The Oklahoma City Thunder play the New Orleans Pelicans on Monday, and if you’re looking to do some last-minute betting research, you’re in luck! We’ll give you the latest point spread, money line odds and over/under number, as well as the information you’ll need to make the smartest bet at BetMGM.

The game starts at 7 p.m. CT and can be seen on Bally Sports Oklahoma.

Jalen Green and the #Rockets are improving by the week, but they’re still clear underdogs (+11.5) in the first of two matchups against the West’s current No. 2 seed in Denver. 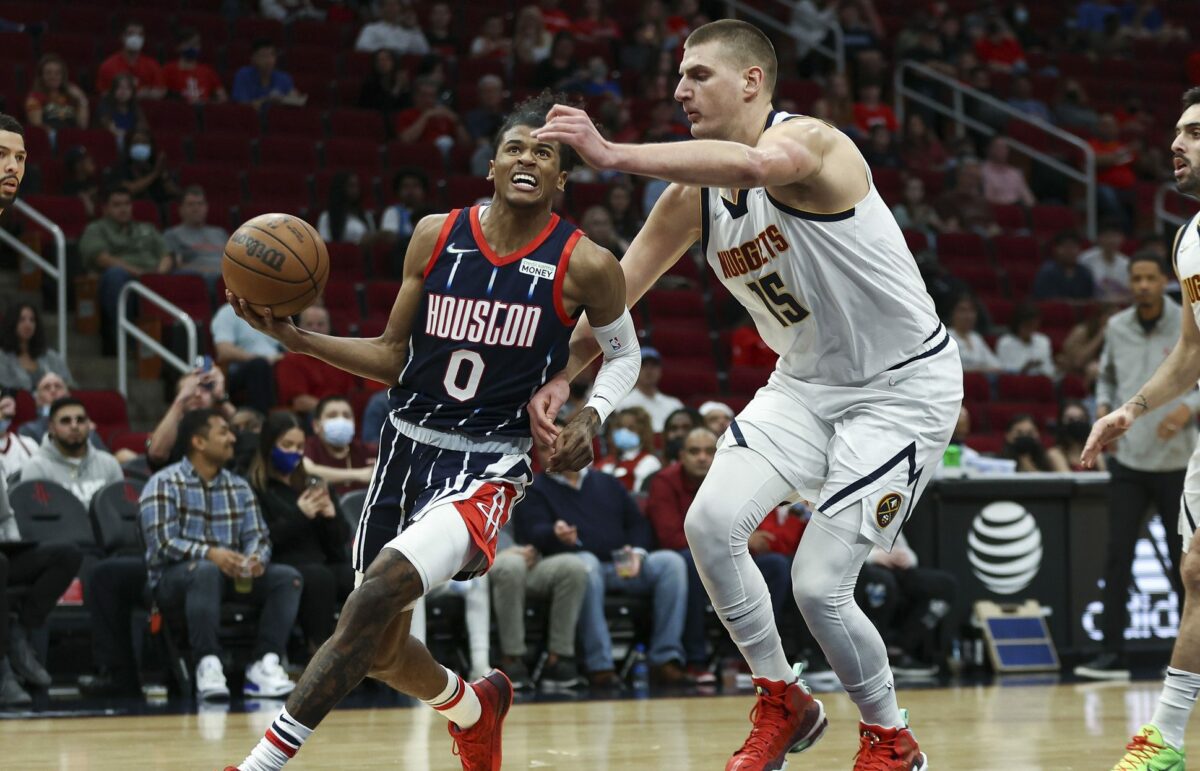 With 21 points, a career-high 19 rebounds, 7 assists, 3 steals, and 2 blocks, 20-year-old center Alperen Sengun was a beast for the Houston Rockets in Saturday’s big win over Oklahoma City. For the second-year prospect, those numbers reminded many of the early days in Denver for Nikola Jokic, now the NBA’s back-to-back MVP.

Starting Monday, the competition gets much steeper for Sengun, who will now face Jokic himself in back-to-back games.

If you’re looking to do some last-minute betting research for the first of two Rockets-Nuggets games, you’re in luck! We’ll give you the latest point spread, money line odds and over/under number, as well as the information you’ll need to make the smartest bet at BetMGM.

The game starts at 8:00 p.m. Central and can be seen via AT&T SportsNet Southwest (in Houston markets) or on NBA League Pass.

Houston has won two straight games and three of its past five, and the two losses (each by single digits) featured a blown 20-point lead and historic shooting nights by Steph Curry and Klay Thompson. Asking the Rockets (5-14) to win in Denver might be too much, but they are playing better of late, so covering isn’t out of the question.

On the other side, while Denver (12-7) is the current No. 2 seed in the Western Conference, their average point differential per game is only +0.7. We’ll take the visitors to cover that large spread number.

Get more betting analysis and predictions at Sportsbook Wire.

Was Clifford trying to cover the spread? 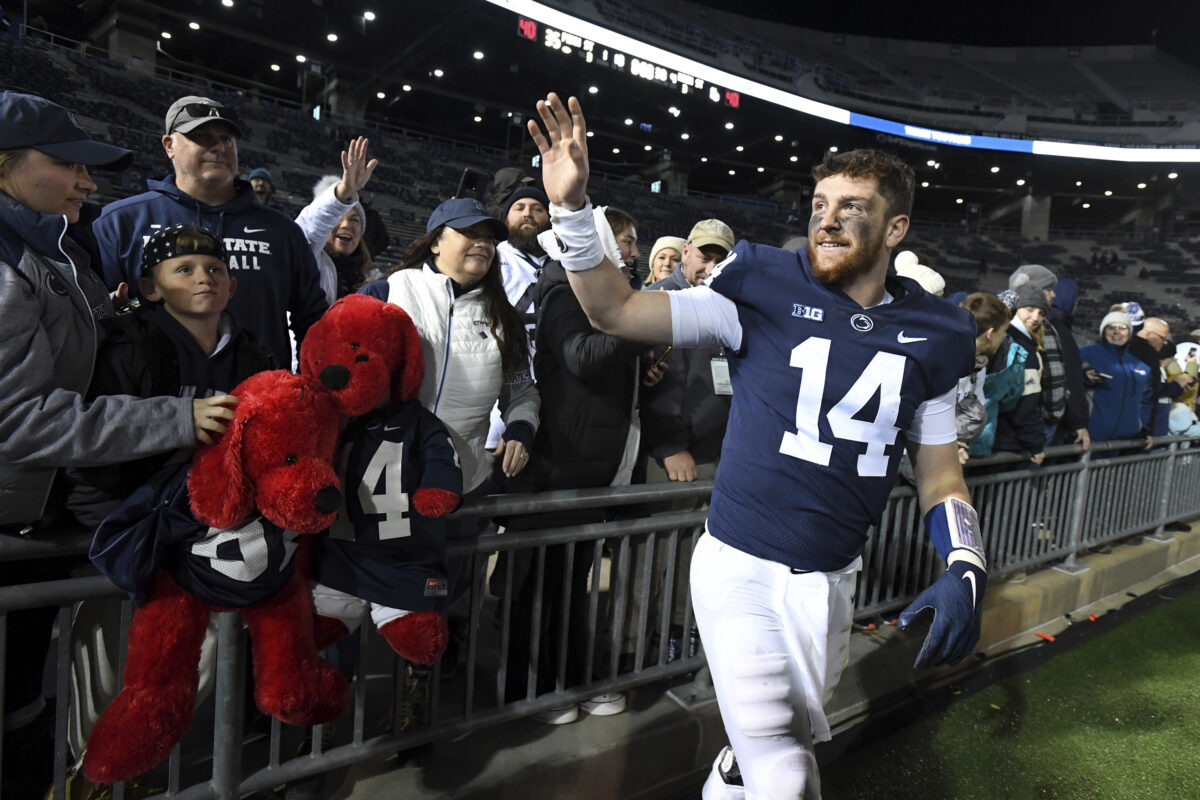 The thing about trying to decipher what a person is saying without audio is you can make yourself believe they’re saying just about anything.

So, if you were watching Penn State play against Michigan State on Saturday, and you had money on the Nittany Lions to cover the spread at around 19 points, and the lead was only 12 after a late touchdown, that might’ve been where your mind was when cameras shifted to Penn State quarterback Sean Clifford on the sideline.

And it might have looked like Clifford was telling a teammate “we have to cover” after throwing a touchdown to put Penn State ahead 28-16.

“We have to cover, we need a touchdown”

OK, so maybe it does look like that. But “cover” has dual meanings in sports. So it’s completely possible he was saying the team has to “cover” — play some defense — to secure the win after allowing touchdowns on consecutive drives to the Spartans.

It’s also possible he didn’t say that at all. Maybe he was saying “we have to convert.”

But neither of those scenarios are as fun as thinking Clifford might’ve had the spread in mind. Especially not after he went out and threw another touchdown on the next drive to put Penn State ahead by exactly 19.

In that moment, he became a man of the people.

Our prediction and best bet for Saturday’s Thunder vs. Rockets game, with odds from
@BetMGM 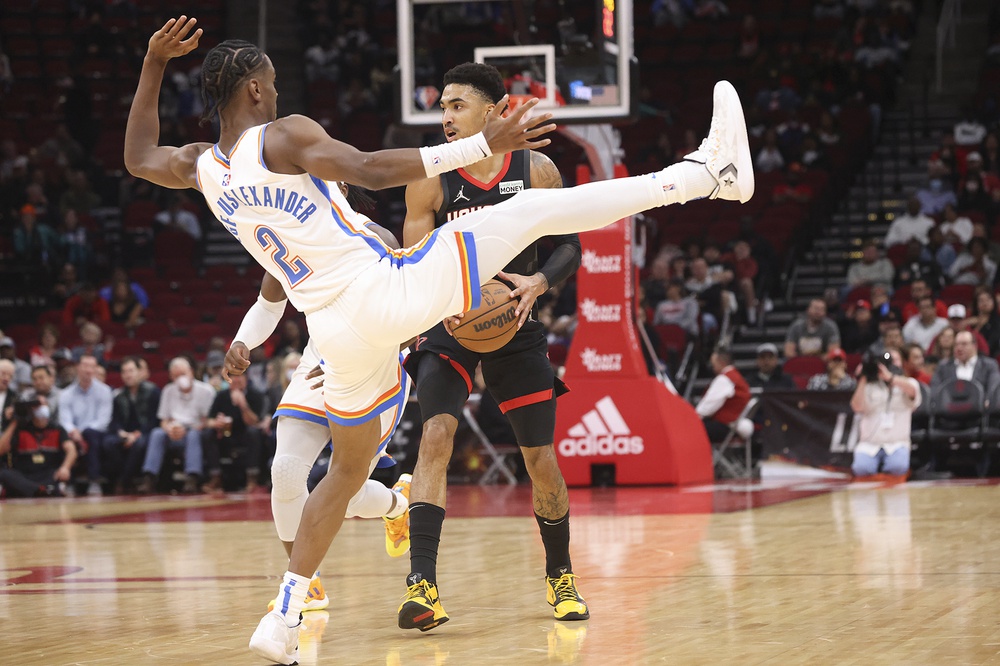 The Oklahoma City Thunder play the Houston Rockets on Saturday, and if you’re looking to do some last-minute betting research, you’re in luck! We’ll give you the latest point spread, money line odds and over/under number, as well as the information you’ll need to make the smartest bet at BetMGM.

The game starts at 7 p.m. CT and can be seen on Bally Sports Oklahoma.

The Thunder were able to snap a three-game losing streak against the Chicago Bulls in an overtime win. The Rockets also won their first game of the back-to-back in a win against the Atlanta Hawks.