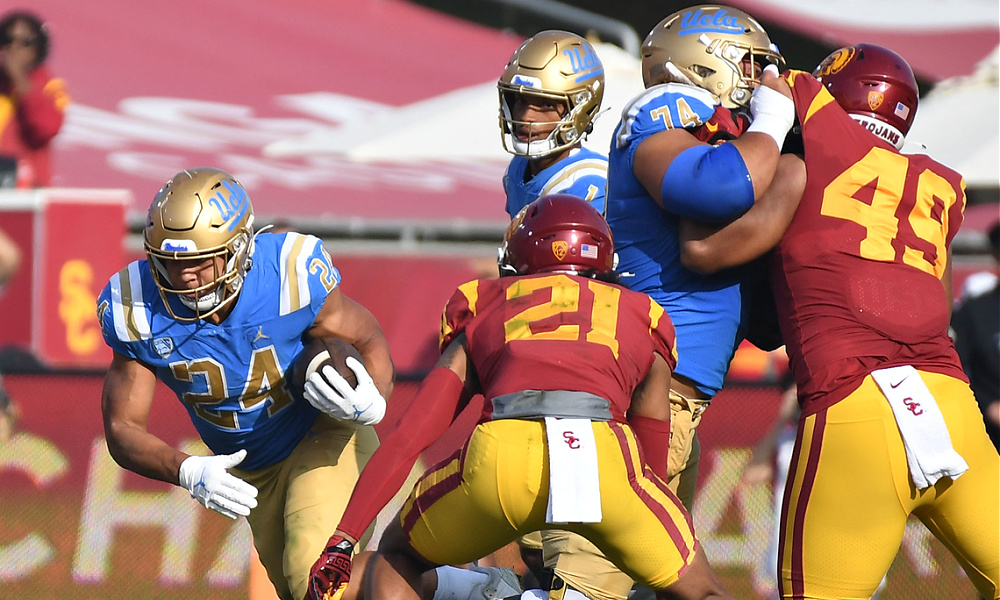 USC and UCLA to the Big Ten?

And you thought the Big Ten was just going to let the SEC have all the fun.

Pac-12 insider of insiders Jon Wilner shook up the world with his tweet that the Big Ten was going to expand with USC and UCLA – or, at least, it was close to making this happen.

That’s it. That’s the move. That’s EXACTLY what the biggest, richest, and most powerful conference in sports had to do to push back against the SEC’s landing of Oklahoma and Texas – and I still won’t believe Texas is actually doing this and not going to the Big Ten, or staying put, until I actually see it.

And now everyone will go crazy wondering what happens next. What’s next for the Big Ten, and the SEC, and the Big 12, and Notre Dame, and the Pac-12, and for college football?

Big Ten. Now what does it do?

You mean besides warm up the cash printing machine?

1) It adds two powerhouse academic institutions. UCLA instantly becomes the second-best school in the Big Ten behind Northwestern, and USC is right there with Michigan.

2) They were the two biggest schools that made sense considering Notre Dame still isn’t a real possibility and the ACC is all but off the table with its awful Grant of Rights deal locking in the member institutions.

3) You want to play, SEC? Yeah, having Houston and Atlanta and parts of Florida is good, but Los Angeles, Chicago, New York – or whatever New York is in the college football landscape – most of Pennsylvania, Detroit, all of Ohio, Minneapolis, and Milwaukee.

4) Coast-to-coast. The Big Ten now is a truly national conference from sea to shining sea. The SEC is regionalized to one section of the country. However, the Big Ten – for all its big things and exposure – isn’t going to make so much as a dent in the SEC markets.

5) North Carolina. It makes too much sense. For all of the talk about the SEC taking over with world domination, get North Carolina and USC and UCLA, and … Notre Dame?

Commissioner George Kliavkoff came in talking about expansion, and being forward-thinking, and seemingly being ready to expand the brand, but now has has to piece together the markets to make up for losing these two monster schools.

There are a few moves the conference can make right away to help ease the pain a little bit.

1) First, forgive for overusing this bit, but it works – you can’t replace Giambi and Damon, but you can Moneyball your way up to being okay.

The Big 12 did it by getting four big schools with big fan bases and enrollment and markets – BYU, Houston, UCF, and Cincinnati – to help make up for it.

The Pac-12 needs schools, markets, and fan bases. Don’t get caught up in the sports aspect of expansion – that comes and goes; it’s about the business side of things.

Kansas just won the basketball national championship. The football side might be struggling – to be nice about it – but it’s got Kansas City and St. Louis along with a national base for hoops. It’s also a Tier 1 research school, and it works well with Colorado relatively nearby.

Kliavkoff has from the start all but said Las Vegas is going to be a part of the mix, so forgetting how bad the football team has been getting UNLV is like the Big Ten bringing in Rutgers.

San Diego State makes too much sense – big market without the NFL, new stadium, repositioning school that works with Arizona and Arizona State. The one problem is the Tier 1 research side – it’s not there, but neither was Nebraska when the Big Ten took it on.

It’s not replacing USC or UCLA, but Kansas, San Diego State, UNLV, and let’s throw in the idea of …

Notre Dame. Now what does it do?

You think Notre Dame will want to be left out of the party?

A source told me that if Notre Dame were to withdraw from the ACC, it can play football wherever it wants. It would have to pay exit fee and grant of rights fees for its other sports.

The Big Ten now starts to make a lot more sense. There’s already the rivalry tie-in with USC, there’s the national feel to the conference – at least more than the ACC or SEC – now in the strange dance these two have done over the years, the Big Ten is now in the much, much stronger position.

Keep the game with USC every year, but join the conference with Stanford, and Cal, and keep the academic profile up all while being in a manageable league with big markets and not a ton of killers on the slate.

SEC. Now what does it do?

Lock down Texas and Oklahoma and don’t let them go.

But that’s not happening – Texas and Oklahoma will go to the SEC.

No, going after Clemson, Florida State, and Miami doesn’t make the sense you might think it would. It doesn’t expand the footprint or the markets. The Big Ten is now coast-to-coast – the SEC needs to get out of the lower right side of the country.

Notre Dame and North Carolina are the dreams, but if the Big Ten can go from one side of the nation to the other, why not Washington? Why not Oregon?

No, assume the SEC sticks with what it has – remember, ACC teams are all but locked into its media deals.

Go pitch Colorado to come back. Go see what you can get out of the Pac-12 and get harder, better, faster, stronger.

More realistically, lock down your programs. Make sure the Pac-12 doesn’t come sniffing around Kansas, and Iowa State, and Oklahoma State. Or go after San Diego State, Boise State, UNLV, and Colorado State – grab the Mountain West teams before the Pac-12 wakes up and does it.

College football. Now what does it do?

The biggest thing out of all of this will be a College Football Playoff expansion.

Now it’s a must considering the SEC and Big Ten are way too big, way too powerful, and there needs to be a locked in way for a 12-team tournament to include all the Power Five conference champs and a Group of Five champ, all while assuring the two big conferences that they’ll each get their three or so stars in every year.

All that, and road trips to LA for the Big Ten fans.