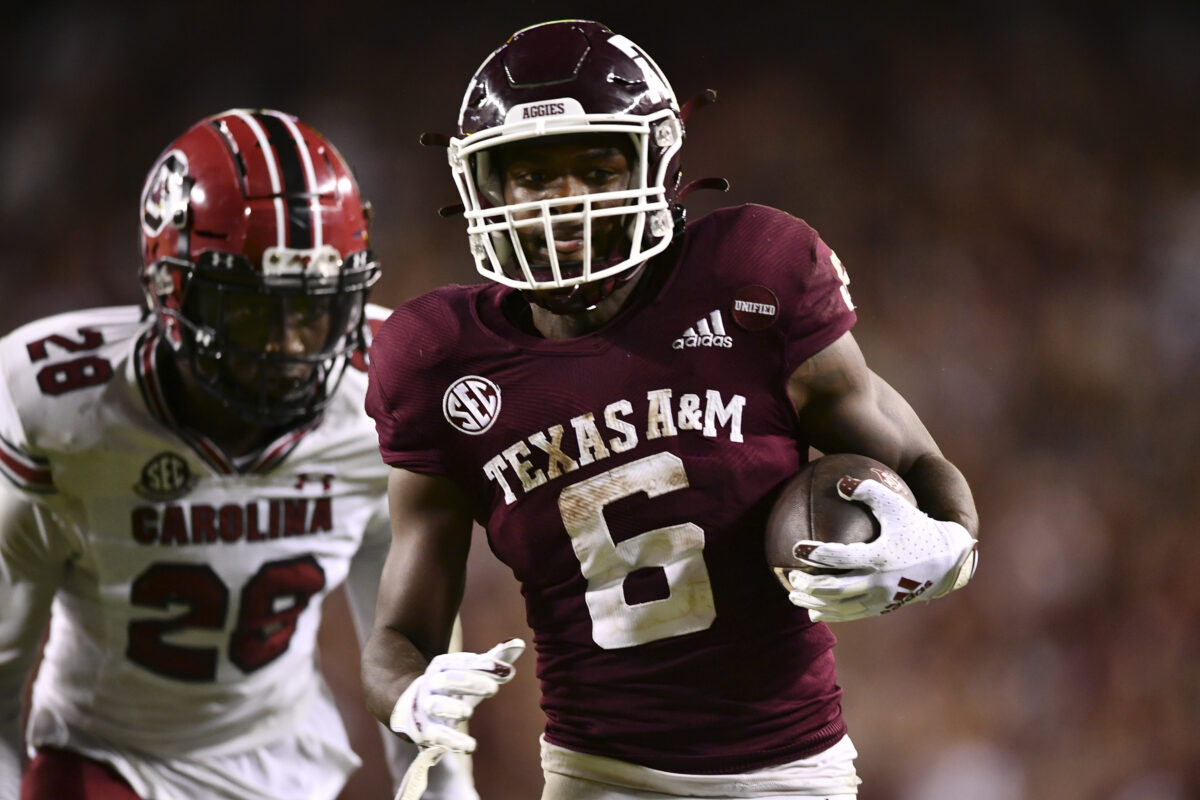 Going into the 2022 football season, Aggies Wire will be looking at each scholarship player listed on the Texas A&M roster.

Over the preseason, each profile will cover where the player is from, how recruiting websites rated them coming out of high school, and what role they will play for Jimbo Fisher this season.

Devon Achane is entering his junior season at the running back position for Texas A&M, coming into the 2022 season with a chip on his shoulder in his first season slated as the starter in the backfield. Achane has rapidly become one of the most lethal players on the field since his first carry in the 2020 season, exhibiting a rare combination of elite speed, quickness, and vision, and is a scoring threat every time he touches the ball. Coming out of Missouri City, Texas, Jimbo Fisher was extremely high on the young all-purpose back, knowing his true potential before a number of Power 5 schools became interested later in the recruiting process.

Achane’s high school stats are otherworldly, to say the least, and as the starting running back and wide receiver for Fort Bend Marshall, he rushed for 4,823 yards and 88 touchdowns in his career, while rushing for 2,266 yards and 40 touchdowns with a 141.6 yard per game average during his senior season. As a receiver, Achane hauled in 96 receptions 2,004 yards, and 22 touchdowns, with 38 receptions, 768 yards, and 10 touchdowns during his senior season. After committing to Texas A&M over the likes of Alabama, Arkansas, North Carolina, and Auburn, he went on to appear in 8 games during the 2020 season, rushing for 364 yards on 43 carries for 4 touchdowns, adding 5 receptions for 97 yards and 1 touchdown while playing behind running back Isaiah Spiller. During the 2021 season, Achane began to truly ascend, sharing carries with Spiller while also returning kickoffs on special teams. He went on to rush for 910 yards on 130 carries for 9 touchdowns, averaging 7 yards per carry, while becoming the 50th Aggie in history to rush for 1000 yards in their career after tallying 98 yards on 10 carries in the win over No. 12 Auburn. He also increased his receiving total to 261 yards on 24 receptions and 1 touchdown.

Class of 2020: 4-Star Player ranking, 21st ranked player in Texas, No. 4 ranked All Purpose Back in the country

Devon Achane is the starting running back in Texas A&M’s pro-style offense led by head coach Jimbo Fisher, and offensive coordinator Darrell Dickey. Achane is listed as the first team running back, with Amari Daniels (Sophomore) and LJ Johnson Jr. (Redshirt Freshman) as his primary backups.

From a scouting perspective, Devon Achane is one of the most electric players in the country and has practically every desirable trait for a running back, while NFL scouts continue to drool over his future potential in the league. Standing at 5-9, 185 lbs, he has put on solid weight after two seasons with the program, coming into the 2020 season at 170lbs. Achane’s game is centered around his elite speed, acceleration, and agility which has been aided by his time in track and field with the Aggies, earning numerous accolades and placing #3 for the Indoor 60m and #4 for the Outdoor 200m this season. His stop/start ability due to his advanced footwork enables his cuts to be effective at a high rate paired with his impressive change of direction, as even the most athletic defenders will have a tough time in their pursuit due to his quick burst as he makes his move in the open field. As a receiver, Achane is a nightmare for linebackers and safeties, displaying excellent instincts as a route runner, and is an instant threat on wheel routes on any down. He shows great hands and solid body control after the catch, and will only get better as a receiver after the 2022 season, where his reliance in the area will only become more vital. Devon Achane is slated to have his best season yet and is perhaps the most important offensive player this season for Texas A&M. The September 3rd opener cannot get here soon enough folks.