The best photos from the Big 12’s first full weekend of conference play in week 5.

Though things didn’t turn out well for the Oklahoma Sooners in week five, the Big 12 enjoyed several entertaining football games.

Oklahoma State and Baylor played a tightly-contested rematch of the 2021 Big 12 championship. Though the Cowboys were largely in control of this game, the Bears made it interesting in the second half.

Kansas State and Adrian Martinez kept the good times rolling with their win over Texas Tech, and Kansas stayed undefeated with their win over Iowa State. That Jayhawks win came much differently than their others this season. They won a 14-11 slugfest over a tough Cyclones defense.

With 2-0 records in Big 12 play, the two Kansas schools are on top of the conference standings through week five. Oklahoma State and TCU are right behind them at 1-0 and are undefeated this season.

Looking back at week five, here are some of the best photos from the Big 12 weekend.

Oklahoma State and Kansas continued their winning ways, and TCU gets a bump after their win over Oklahoma in this week’s power rankings. 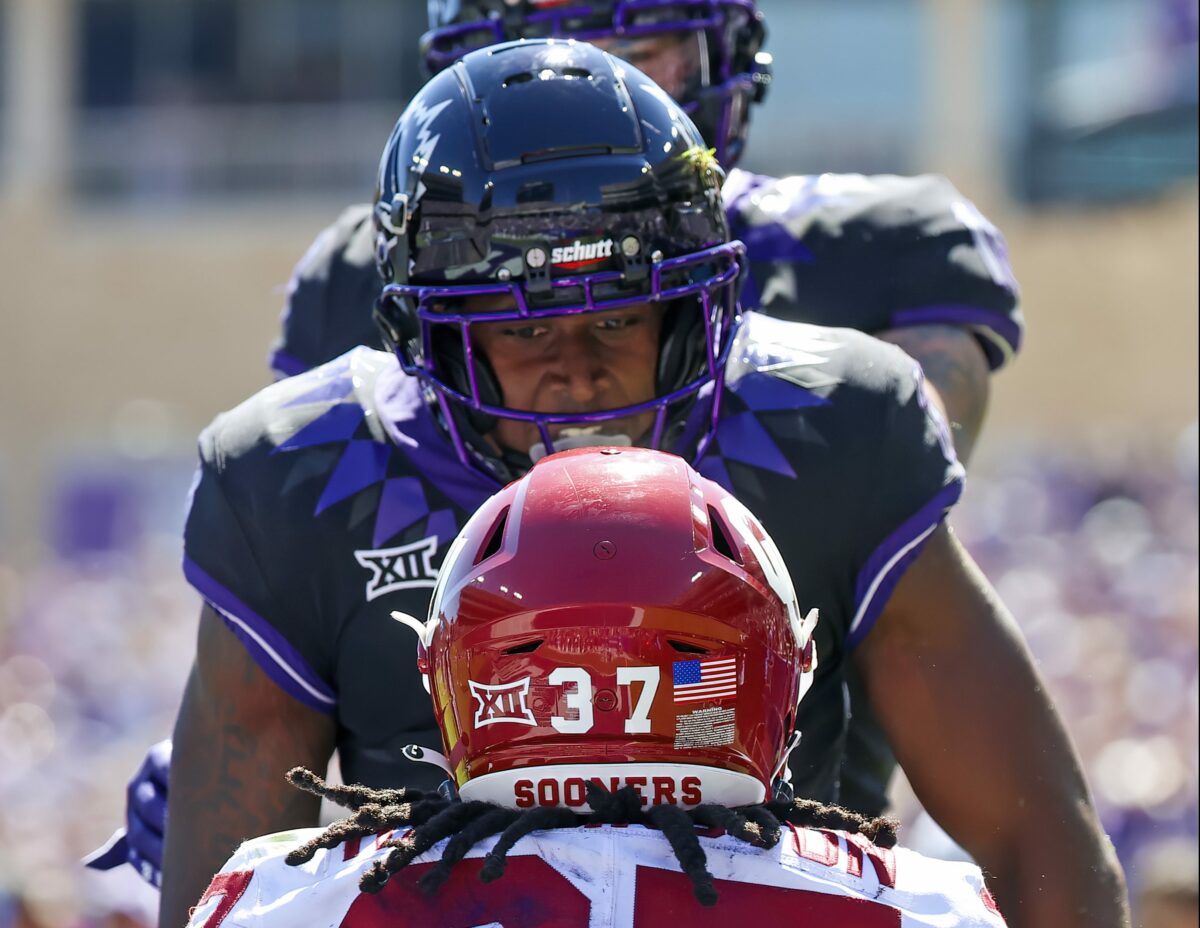 Big 12 play in the early going has provided some fantastic games and storylines. The resurgent Kansas Jayhawks have earned the right to host College Gameday next Saturday when they host the TCU Horned Frogs.

Kansas State followed up their performance against Oklahoma with another strong outing, this time against Texas Tech, and the Longhorns rebounded from their loss in Lubbock with an 18-point win over West Virginia.

After week five’s action, let’s update the Big 12 power rankings, shall we?

The Texas defensive line is a matchup nightmare for Texas Tech this week. 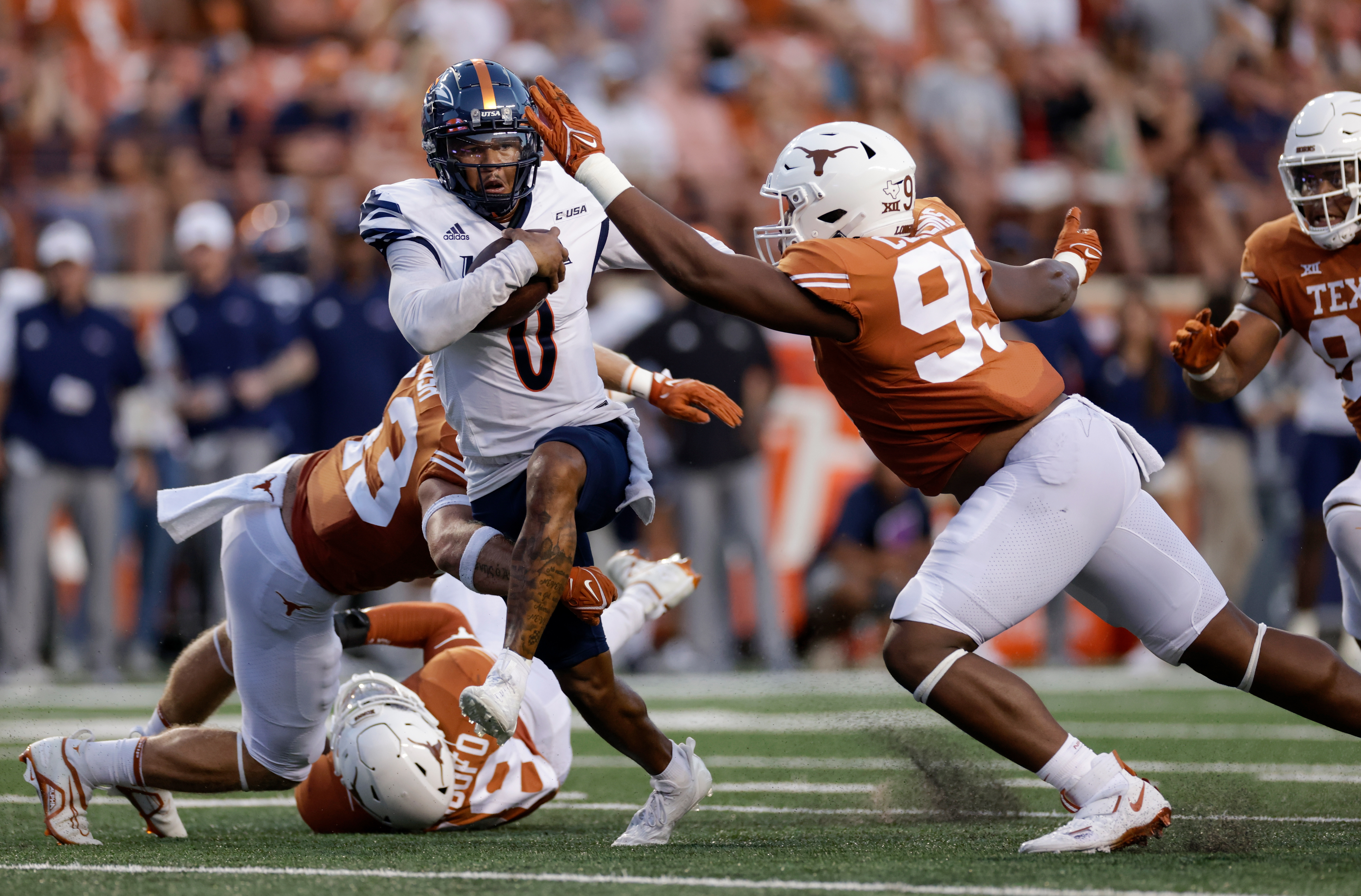 Texas Tech has for the most part played good football through three games. The Red Raiders are 2-1 with an upset win over the Houston Cougars. They have done so in spite of struggling offensive line play.

We can break down a number of matchups, but the Texas defensive line has an opportunity to render those matchups meaningless. The Longhorns defensive front has the chance to go out and singlehandedly win the game.

Last season we wondered if we overrated the highly regarded Texas defensive front. Players like Keondre Coburn, T’Vondre Sweat, Moro Ojomo and others received plenty of mention prior to last season, but never lived up to their billing. Now, it appears they were as good as we expected all along.

Coburn and company made their mark against the Alabama offensive line in Week 2. If they bring the same intensity this week, the Tech offensive line could be in for a long day.

There are several fantastic matchups on the Big 12 slate for Week 2. Here are our predictions for how the games play out. 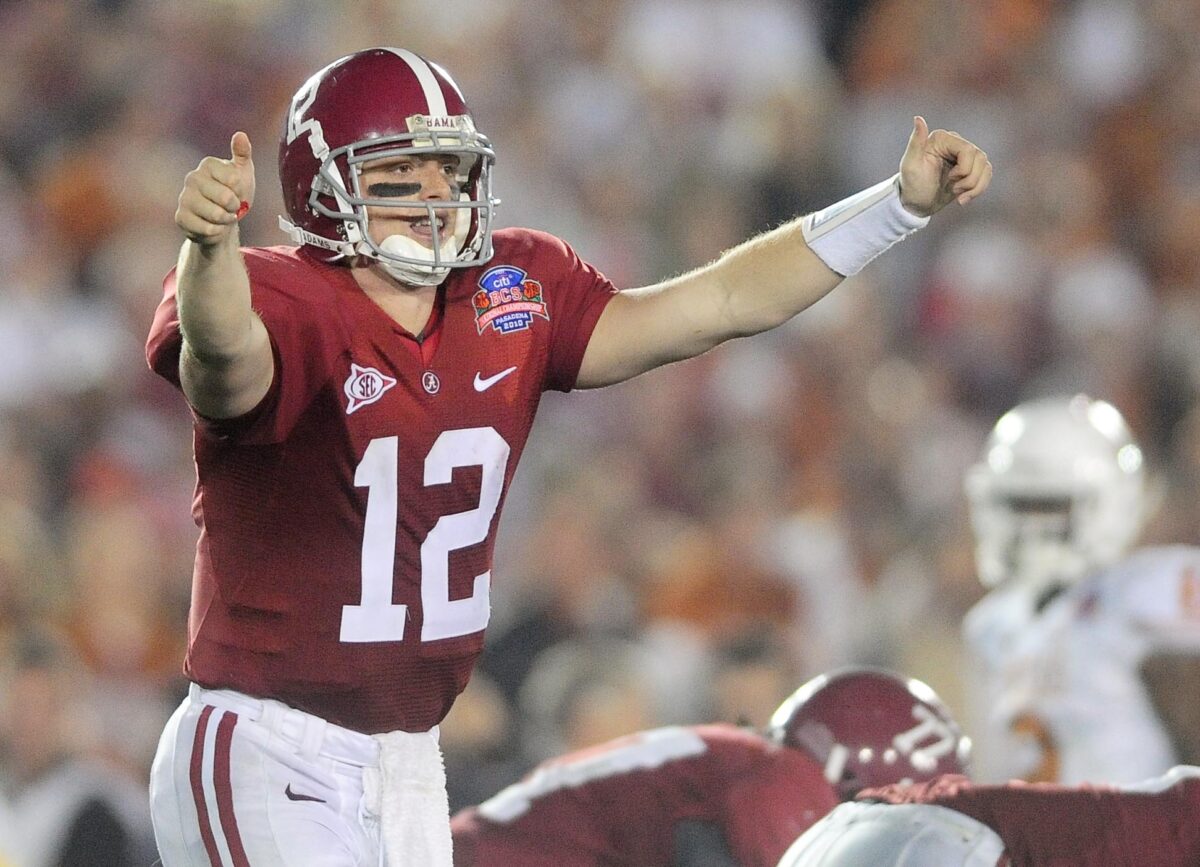 Last week, conference teams won by an average margin of 37.4 points in the nine victories.

The schedule should be a bit tighter this week as the conference has several marquee matchups and intriguing nonconference games on the schedule. The Big 12 conference schedule also gets underway with Kansas making the early season trip to Morgantown to take on the West Virginia Mountaineers.

ESPN’s Bill Connelly updated his SP+; where do the Oklahoma Sooners and their opponents stand in the final projections of the preseason? 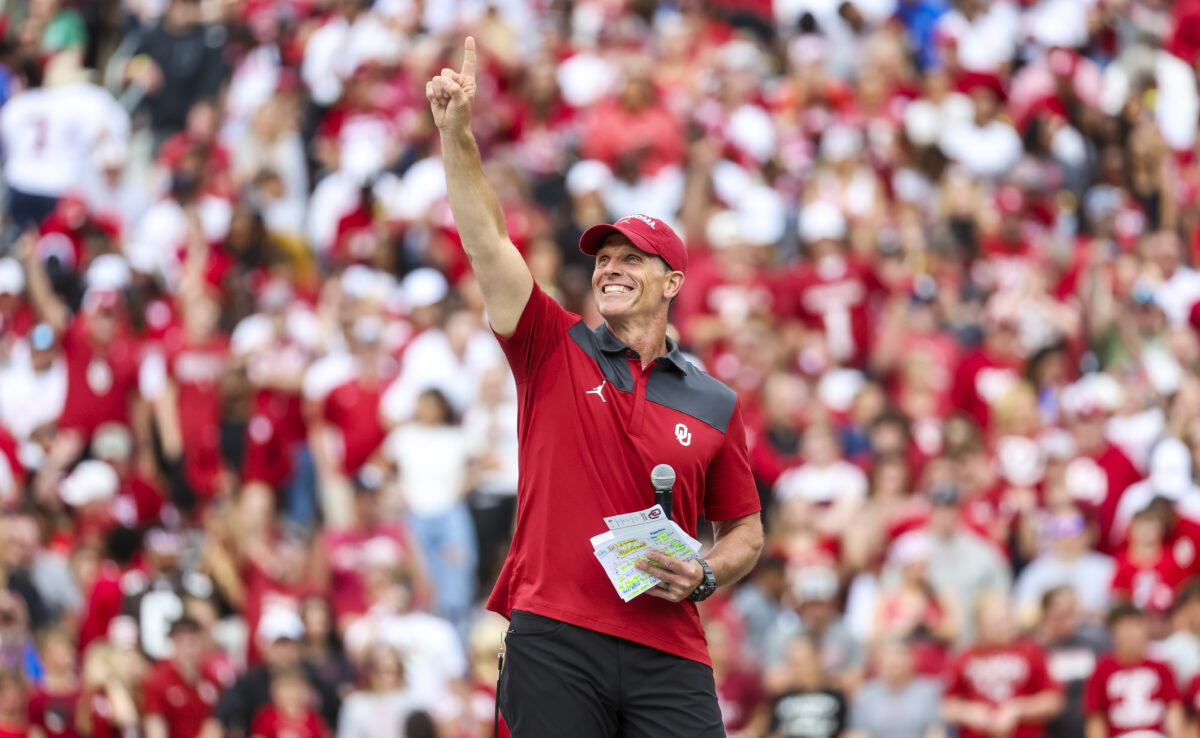 Week 0 is upon us! The start of the 2022 college football season is here. Though the Oklahoma Sooners will not kick off against the UTEP Miners for another 13 days (and counting), we get football this week.

With the season getting underway this week, Bill Connelly of ESPN updated his SP+ ratings (ESPN+) for a final look ahead of the 2022 season.

Oklahoma moved up a spot from the last update in May.

As always: SP+ is a tempo- and opponent-adjusted measure of college football efficiency. It is a predictive measure of the most sustainable and predictable aspects of football, not a résumé ranking, and, along those same lines, these projections aren’t intended to be a guess at what the AP Top 25 will look like at the end of the year. These are simply early offseason power rankings based on the information we have been able to gather to date. – Connelly, ESPN

Here’s a look at where each team on Oklahoma’s 2022 schedule ranks in the ESPN SP+ rating and their projected win total for the season.

Who has the toughest strength of schedule in the Big 12 according to Pro Football Focus’ college football preview? 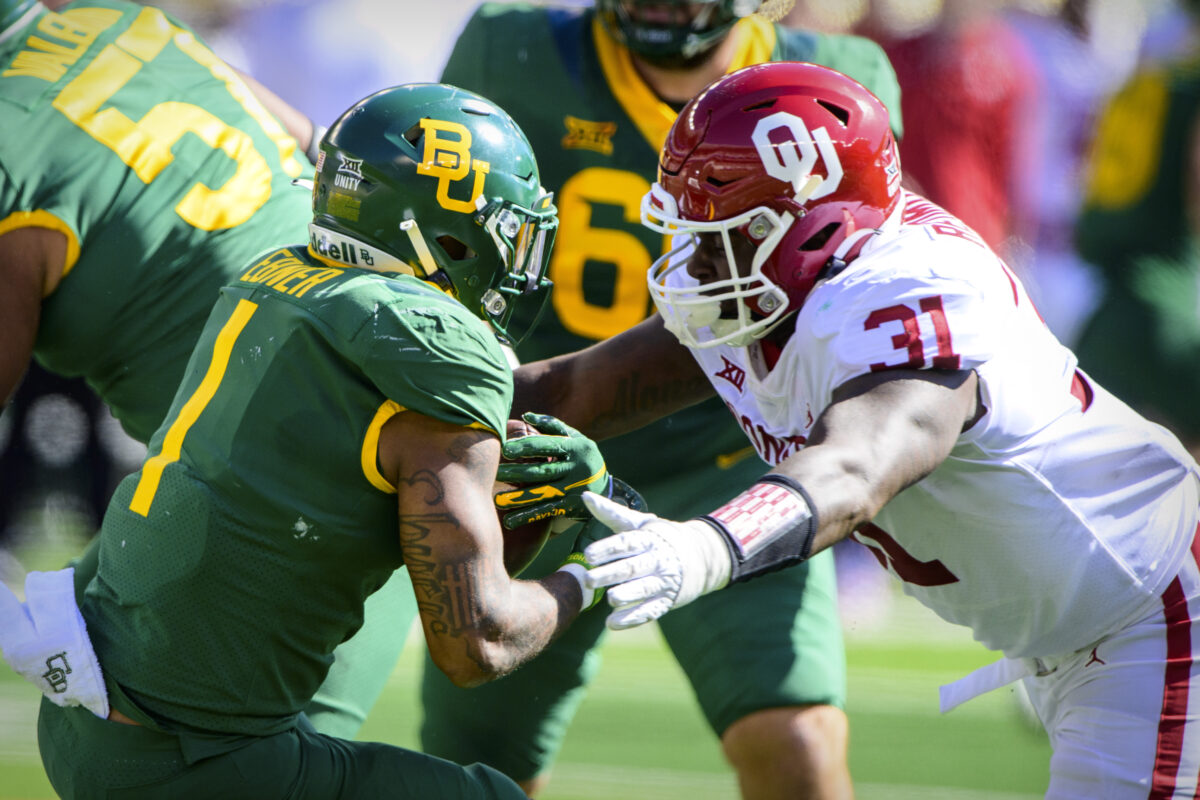 The 2022 college football season is so close we can almost taste it. The Oklahoma Sooners held their first practice of fall camp on Friday, meaning the home opener against UTEP will be here before we know it.

Brent Venables and the Oklahoma Sooners are looking to open the season strong in a year where expectations remain high after missing out on the Big 12 championship game in 2021.

The Big 12 looks tough this season. While Oklahoma will be among the favorites in the league, defending champion Baylor will be good on defense yet again, and if they can keep their running game going will be tough to beat in 2022. Oklahoma State has the most experienced quarterback in Spencer Sanders and, despite the losses on defense, should be one of the teams in contention.

Quinn Ewers, one of the least experienced quarterbacks in the Big 12, leaves the Longhorns as a wild card. They should be good again offensively, but that wasn’t necessarily the problem last year. It was the defense.

Throw in teams like Kansas State and West Virginia, who could be dark horse contenders, and there’s a solid six teams that could be in contention into November.

A lot of how the 2022 season transpires could simply come down to scheduling. The Oklahoma Sooners will play Baylor, Oklahoma State, and Kansas State at home. They have the neutral site game against Texas and have road games against Nebraska, West Virginia, and Iowa State that could prove difficult.

As we get set for the 2022 season, Pro Football Focus released their season preview (premium), and this is how they ranked the Big 12 according to strength of schedule.

Where do the Oklahoma Sooners and their 2022 opponents rank in Athlon Sports 1-131 projections for the 2022 college football season? 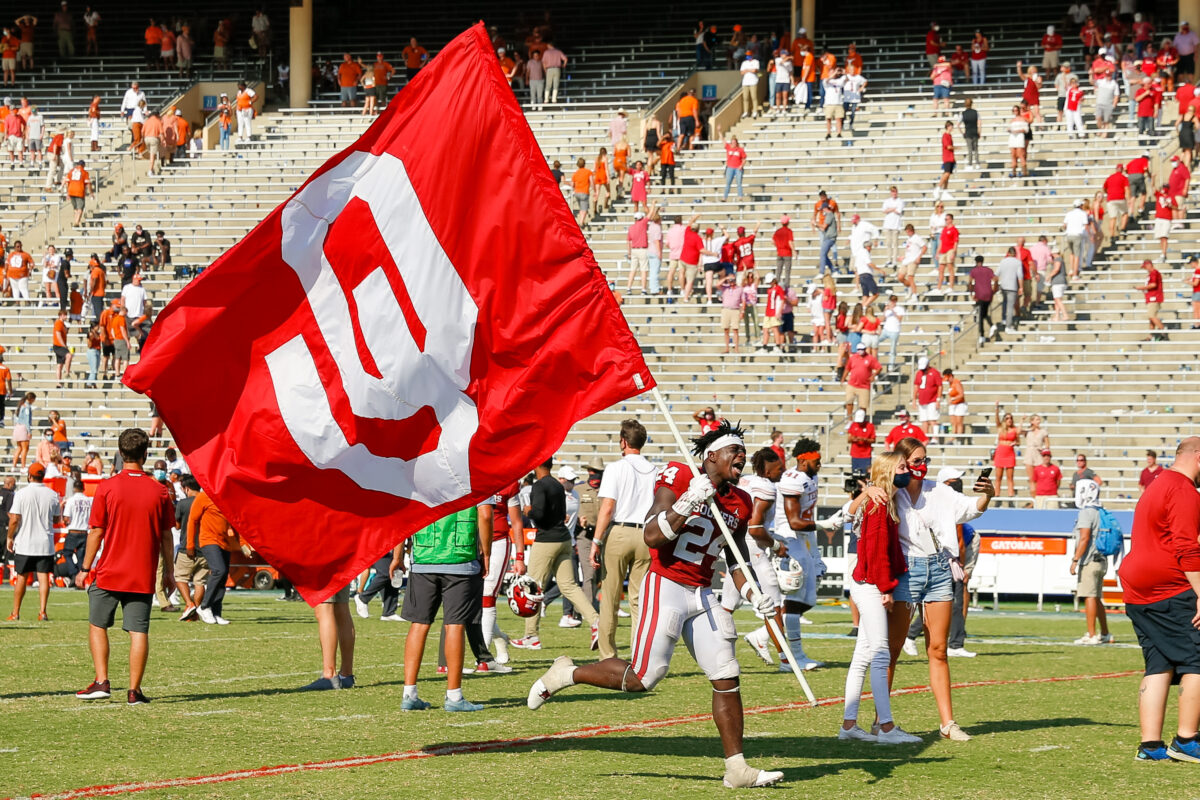 The Oklahoma Sooners open the 2022 college football season in 44 days when they host the UTEP Miners. This year’s season opener carries quite a bit more weight and anticipation than perhaps years past as the Sooners usher in a new era of Oklahoma Football under Brent Venables.

It also marks the start of a new era of offense with Jeff Lebby taking the helm. Lebby is one of the best offensive coordinators in college football and will bring a new look to the Oklahoma offense.

Here’s how Brent Venables described the future of Oklahoma football under his leadership.

The Oklahoma Sooners have had a fantastic month and a half since the calendar turned to June and have climbed just outside of the top 10. 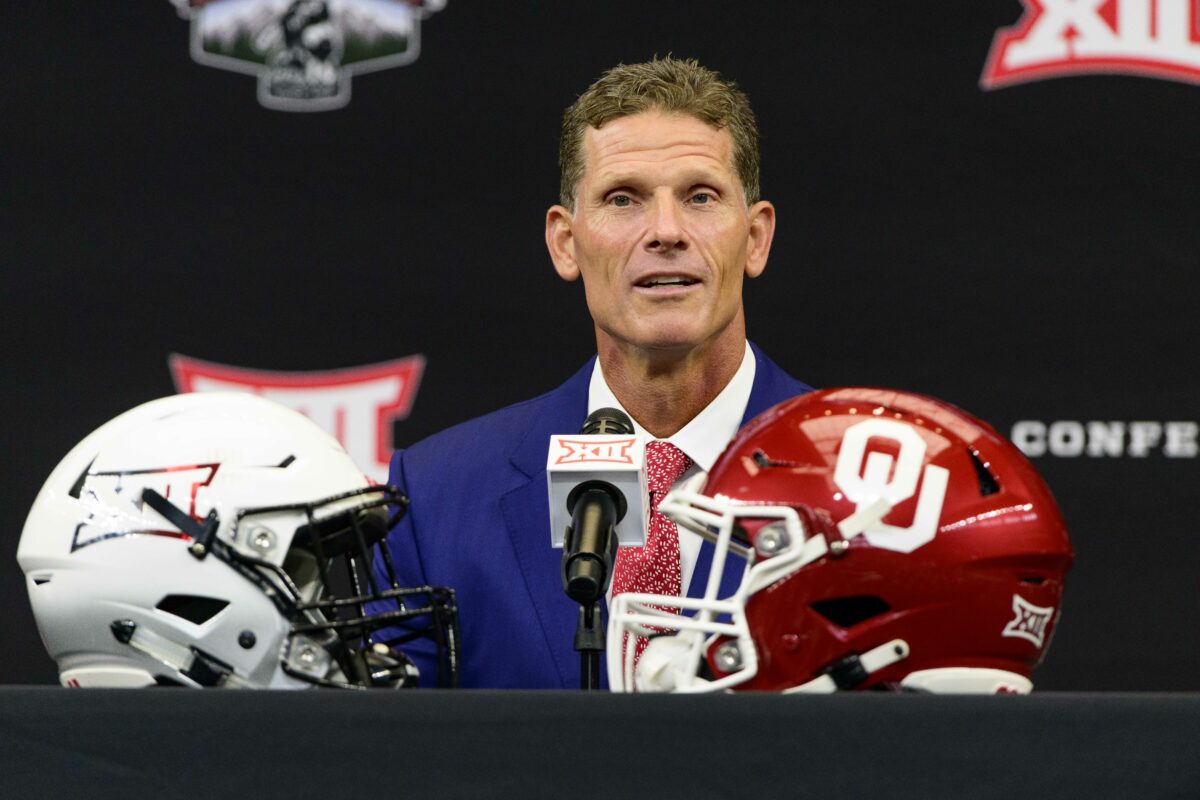 The Oklahoma Sooners have added 11 commitments in the last month and a half to make a significant jump in the 247Sports composite team recruiting rankings.

They’ve made the biggest move up the rankings since June 30, landing commitments from four-star players like Cayden Green, Jaquaize Pettaway, Samuel Omosigho, Adepoju Adebawore, and Daylan Smothers. Add them to a recruiting class that includes five-star quarterback Jackson Arnold and four-star running back Kalib Hicks, and this group has a chance to improve even further beyond their No. 11 class in the country.

While the Texas Longhorns lead the way in the Big 12, the Sooners have closed the gap with their incredible couple of weeks in the month of July.

Let’s take a look at how the Big 12 stacks up in the latest team recruiting rankings from 247Sports.

College Football News predicted each game for the Oklahoma Sooners in 2022. Where do they see OU stumbling? 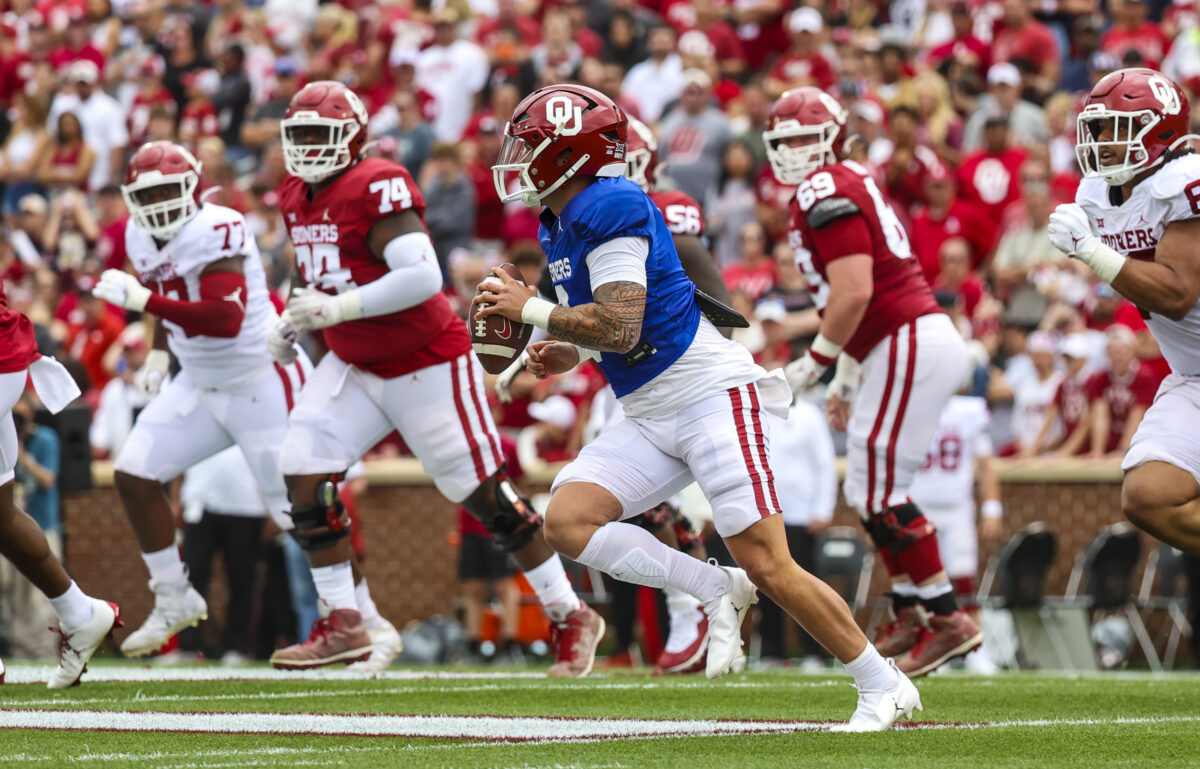 Under two months from the Oklahoma Sooners season opener against the UTEP Miners and the time for predictions and prognostications has arrived.

Eager to bounce back from their disappointing 2021 season and open a new chapter of Oklahoma football, Brent Venables will be looking to build upon the foundation set by Bob Stoops and Lincoln Riley.

How does ESPN’s Football Power Index project the Oklahoma Sooners’ schedule to play out in 2022. 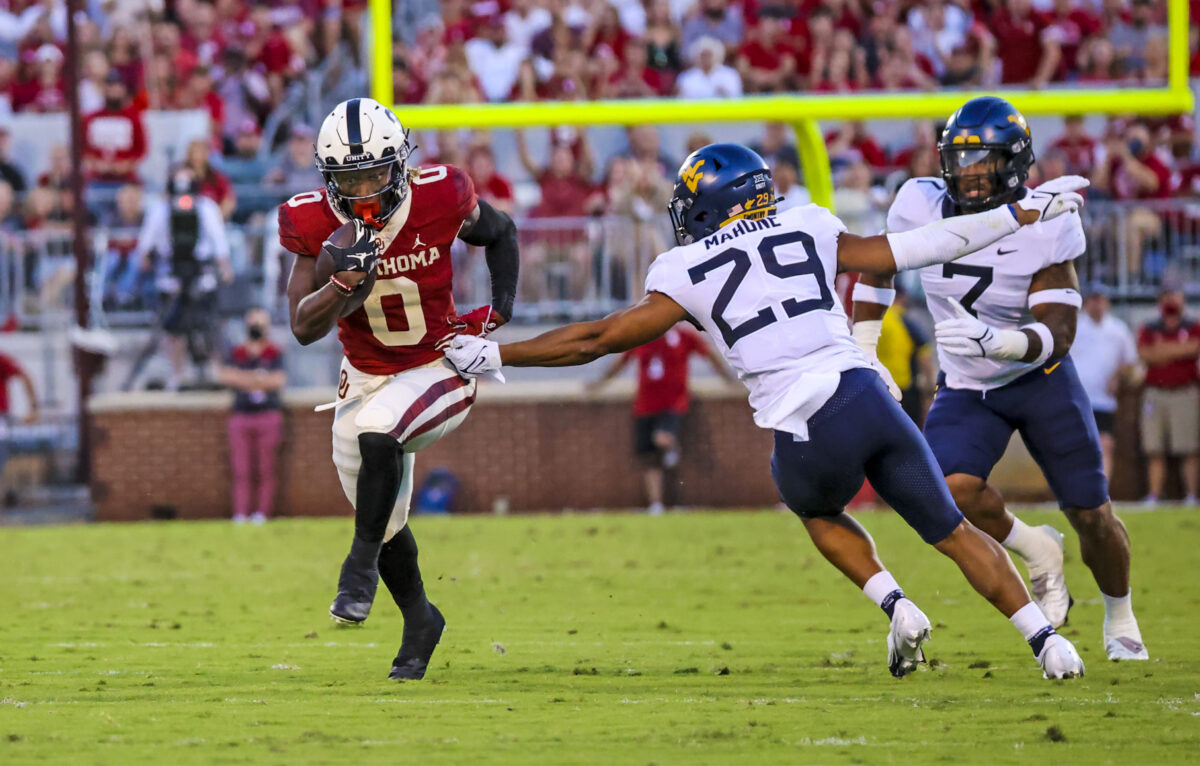 Heading into the 2022 college football season, the Oklahoma Sooners are looking to return to the top of the Big 12 mountain. One of the favorites to contend for the conference title, the Sooners will have to avoid losses in several touch matchups to return to their place of prominence among their conference foes.

In each of the last two seasons, the Lincoln Riley-led Sooners dropped a pair of conference games. In 2020, it was Iowa State and Kansas State that upended the Sooners early in the year. In 2021, Baylor and Oklahoma State got the better of Oklahoma at the end of the season.

Though Oklahoma made it to the Big 12 title game, and won it, in 2020, it needed a lot of help to get there after its two early losses.

Just under two months to the start of the 2022 season opener against UTEP, ESPN’s Football Power Index updated its latest win projections. Let’s take a look at how the Sooners are projected to fare in 2022. Like last year, we’ll update this before the opener and throughout the season.