The Oregon Ducks hung tough against a strong Michigan State Spartans team, but ultimately lost their third game in a row, 74-70. 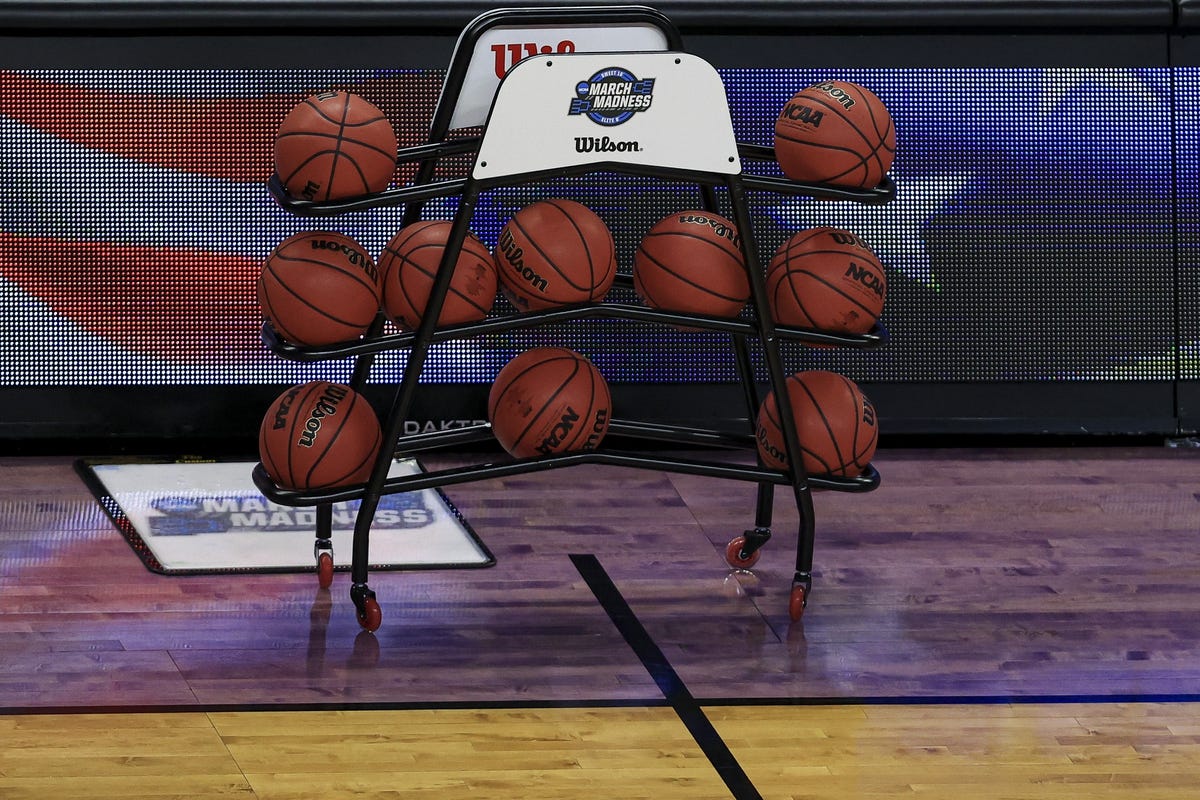 Dana Altman and the Oregon Ducks suffered their third consecutive loss of the season, fighting valiantly but ultimately losing 74-70 to the Michigan State Spartans in the second round of the PK85 Invitational on Friday evening.

Will Richardson had an outstanding night for the Ducks, dropping 28 points on 10-21 shooting, while adding eight assists, five rebounds, and two steals.

N’Faly Dante left the game early while undergoing concussion protocol, pushing freshman Kel’el Ware into a bigger role. Ware finished with 17 points and nine rebounds, but he went just 2-9 from beyond the arc.

Oregon’s bench scoring was nearly non-existent, with just a Lok Wur three pointer keeping them from getting shut out as a unit.

The Ducks will take part in the seventh place contest against a banged up and underperforming Villanova squad on Sunday, giving Altman and his team a chance to pick up a nice win to close out the weekend.

The Oregon Ducks looked listless and out of sports in a demoralizing loss to the UConn Huskies in the PK85 Invitational on Thursday. 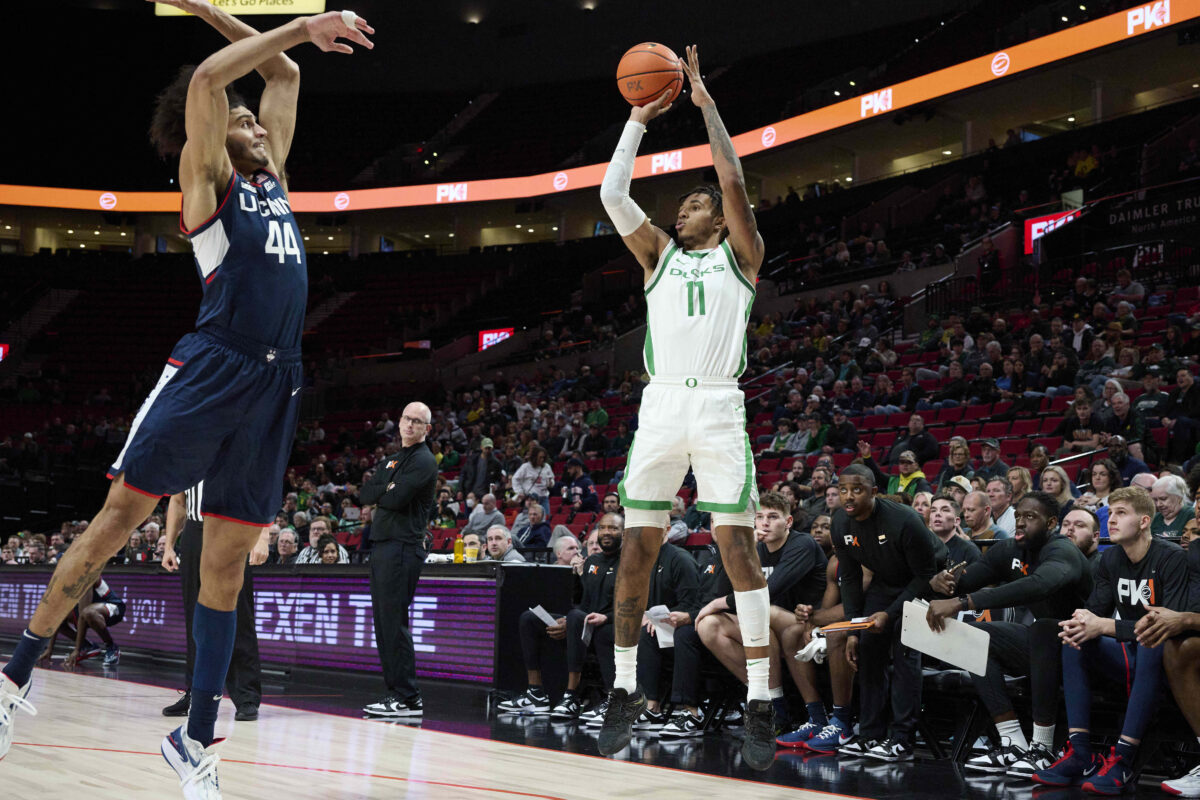 It was forgivable – understandable even – that the Oregon Ducks dropped a game to the Houston Cougars last week to move to 2-2 on the season. Houston looks like perhaps the best team in all of college basketball, and Oregon held them to 66 points and hung tough throughout.

However – Thursday’s performance against the UConn Huskies in the Phil Knight Invitational didn’t give Duck fans anything to be thankful for.

Dana Altman’s squad shot an abysmal 20-for-47 from the field, good for just 42.6%, while turning the ball over a whopping 17 times. Factor in a horrific 14-25 showing at the free throw line and you have all the makings of a world class beatdown, suffered on Nike founder Phil Knight’s birthday in Portland, just a few hours north of Matthew Knight Arena. Yikes.

Here is some more info on Thursday’s tough outing for the Ducks, and what is coming up for Altman’s team this weekend:

This was much closer to the Oregon Ducks we thought we’d see this year, with a big 81-51 win over Montana State. 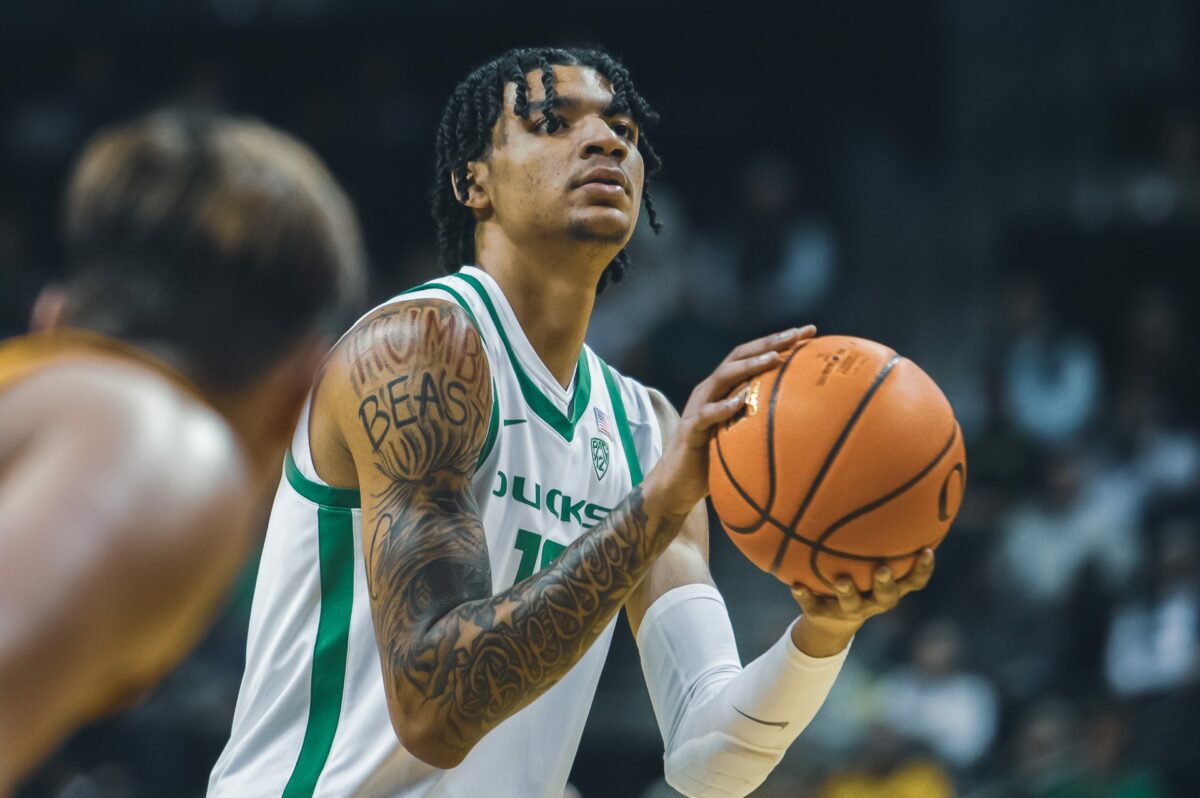 This is certainly closer to the Oregon Ducks team we expected to see at the start of the year.

While the first two games of the season — an underwhelming win over Florida A&M and an excruciating loss to UC Irvine — left a lot to be desired from Dana Altman’s squad, the Ducks seemingly turned a corner on Tuesday night, taking down the Montana State Bobcats in dominant fashion, winning 81-51.

The shots finally started falling for Oregon, and the energy levels were certainly improved. While there is still a lot that can get better, particularly when it comes to free throw shooting, this was the best that we’ve seen the Ducks look in a while.

Here are some important takeaways from the game:

A 69-56 final score does not paint the whole picture for Oregon. This was one of the worst Duck losses in the Dana Altman era. 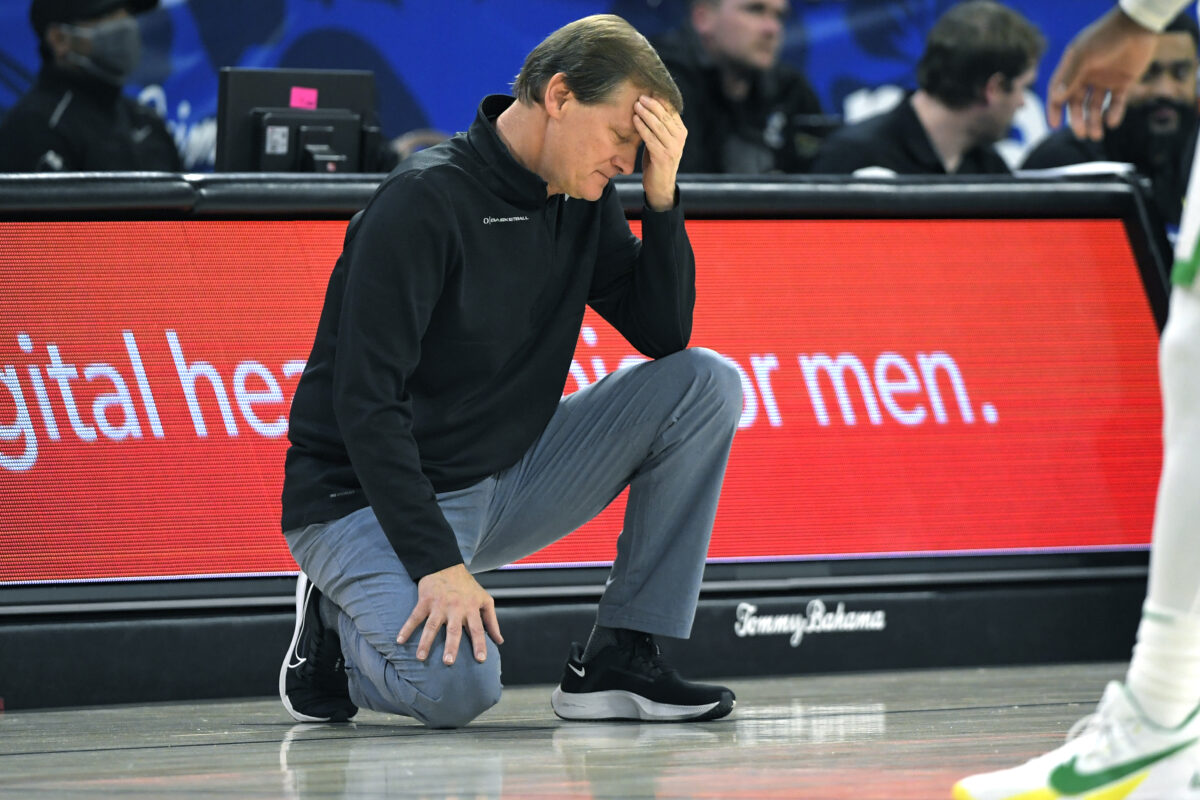 That’s probably not how the Oregon Ducks thought this one was going to play out when scheduling the UC Irving Anteaters for an early-November game.

The final score read 69-56 on the scoreboard, but some late-game shot-making helped save this one from looking as bad as it should have. It was one of the worst losses that Oregon has suffered at home to start a season since their loss to Texas Southern in 2018. The number on Friday night further underlined a message that came across in the Ducks’ first game of the season last Monday — this team is far from their ceiling right now.

That’s not a rare occurrence for Dana Altman teams in November. With a handful of new additions and the unfortunate injury luck that has plagued this team over the past couple of months, it’s understandable why they are playing at this level. However, they are going to need to turn things around quickly, as No. 3 ranked Houston comes to town in just over a week.

If you didn’t make it through the entire game on Friday, I can’t say I blame you. Here’s everything you need to know about the defeat.

Dana Altman signed the No. 7 class in the nation on Wednesday, and went into detail on what each one offers the Ducks. 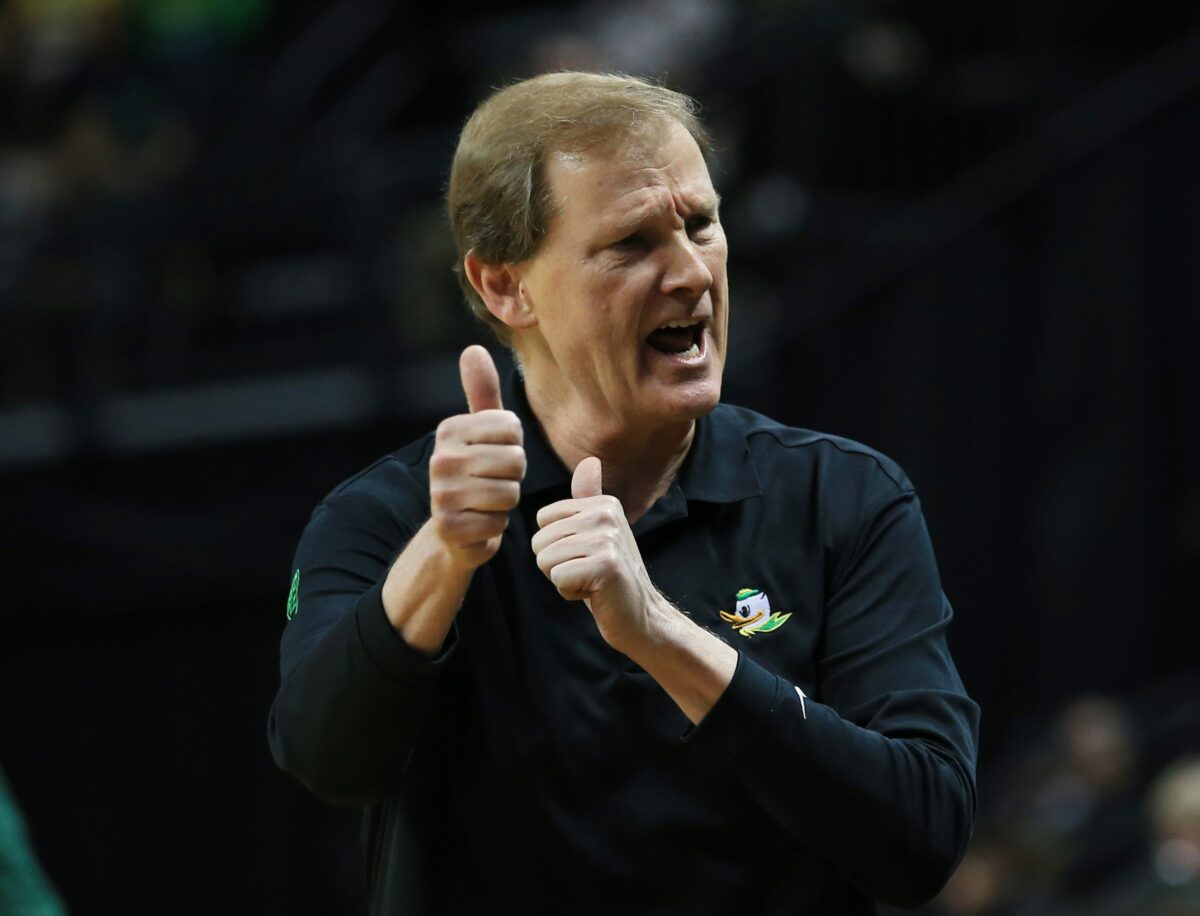 With the No. 7 ranked recruiting class in the nation putting pen to paper on Wednesday, Oregon Ducks head coach Dana Altman was free to discuss the additions that his team made to the roster this week, and what the incoming players — 5-star KJ Evans, 5-star Mookie Cook, and 4-star Jackson Shelstad — would offer to the team.

With Cook and Shelstad growing up in Oregon, Altman has been recruiting them for a long time, and was finally able to make the addition official this week. As for Evans, one of the top-ranked players in the nation, it was a signing that has been in the works for a couple of years.

When talking to the media on Thursday about the class, Altman broke down what he liked about each player and a little bit about how the recruitment for each one went. He also broke down some of the new recruiting landscape, touching on the impact that NIL has.

Here is everything Altman had to say about recruiting on Thursday: 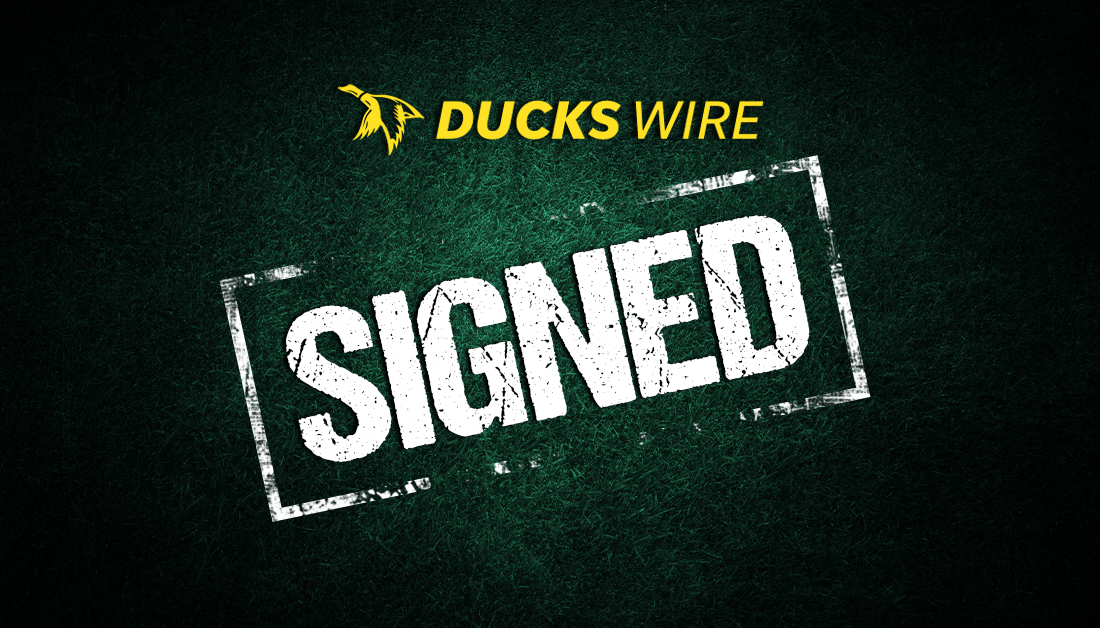 The newest class of Oregon Ducks put pen to paper on Wednesday afternoon, making it official that they will be coming to Eugene to play for Dana Altman next season.

The early period of national signing for college basketball started on Wednesday, which saw the Ducks add 5-star PF Kwame Evans, 5-star SF Mookie Cook, and 4-star PG Jackson Shelstad. The group of new Ducks ranks as the No. 7 recruiting class in the nation during the 2023 cycle.

The 2023 recruiting cycle is far from over, as recruits have until May 17, 2023, to commit and sign. At the moment, though, the Ducks should feel extremely confident about who they are bringing into the fold.

Let’s take a closer look at who the Ducks are getting in the three prospects:

A win is a win. There’s a lot to clean up for the Ducks, but they got the job done against Florida A&M on opening night. 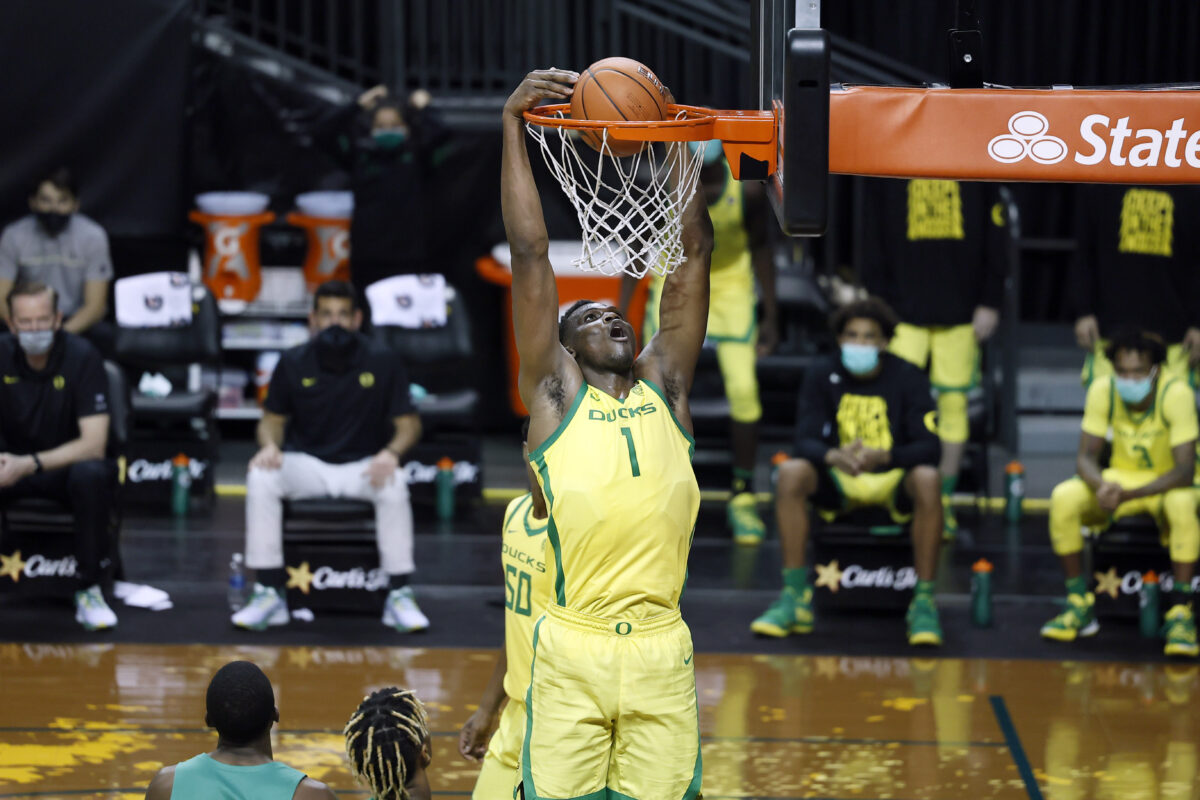 It certainly wasn’t pretty, and it left head coach Dana Altman wordlessly frustrated at times, sitting on the scorer’s table with his arms crossed in front of his chest, head down and shaking side to side.

Chalk this 80-45 win over Florida A&M up to early season jitters, or growing pains, or the fact that this Oregon Ducks’ team has been so riddled with injuries at times this offseason that they’ve struggled to field a full practice.

Whatever you want to blame, just hope that it’s something that can be fixed relatively quickly. While the Ducks have a couple of easy games coming up, they soon go to Portland for the PK85 tournament, where this type of play won’t stand.

Here’s everything you need to know about Monday’s season-opening win. 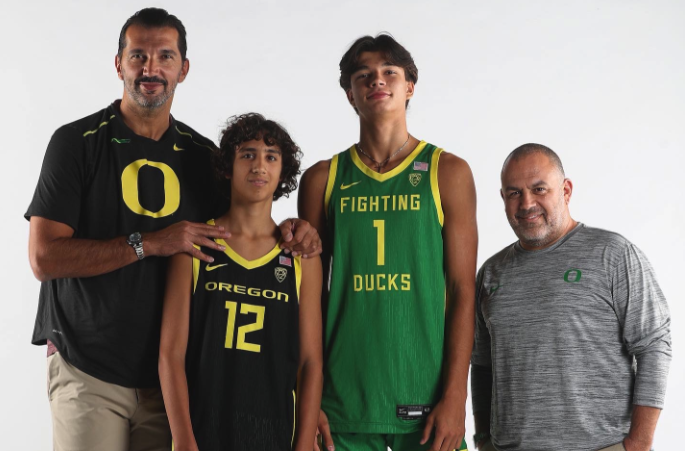 The Oregon Ducks took a tough loss on Monday afternoon, with 5-star small forward Andrej Stojakovic announcing that he would be committing to the Stanford Cardinal rather than coming to Eugene.

Stojakovic chose the Cardinal over the Ducks, Texas Longhorns, and UCLA Bruins.

Stojakovic attended the Oregon vs. BYU game earlier this month, getting a sideline pass with his dad, former NBA legend Peja Stojakovic, a three-time NBA All-Star and NBA Finals winner in 2011 with the Dallas Mavericks.

After the game was over, video surfaced of both Andrej and Peja getting some shots up in Matthew Knight Arena.

In the end, Oregon couldn’t land Stojakovic. However, they still boast the No. 7 ranked class in the 2023 cycle, with 5-star Kwame Evans and 5-star Mookie Cook leading the way.

Injuries have slowed Oregon’s progress this offseason. They’ll now rely on a veteran group of leaders and a healthy N’Faly Dante to get things started. 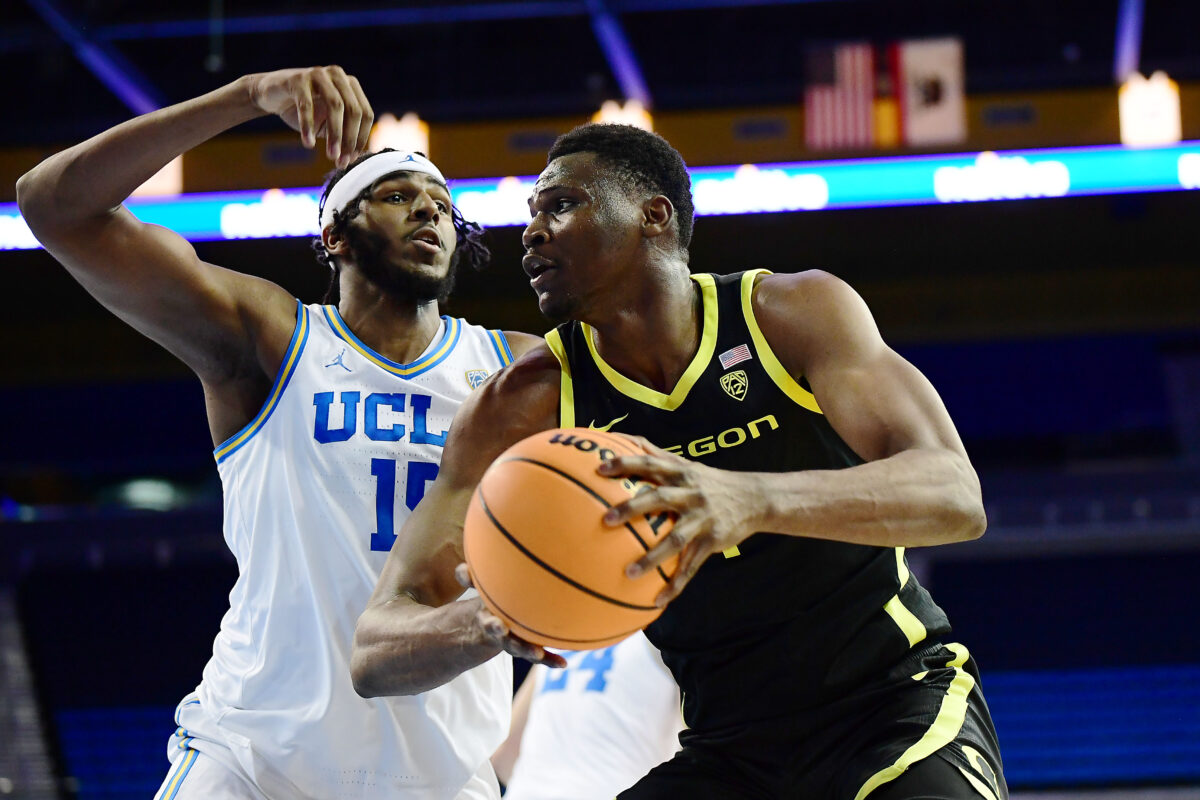 Dana Altman has never been one to mince words. If he doesn’t feel confident about his team or is frustrated by where they currently stand, then he’s going to let you know about it.

So when Altman spoke with fans and media members last week ahead of the Oregon Ducks tip-off to the season, it shouldn’t have come as much of a surprise that the head coach was rather honest about where his team currently stands heading into their first game of the season against Florida A&M on Monday night.

“We’ve got to make some progress. We are way behind where we should be,” said Altman. “We just haven’t had the practice time with enough guys to get them reps.”

Injuries have been an issue this offseason for the Ducks. Not only has 5-star freshman Kel’el Ware been dealing with a leg injury, but Rivaldo Soares is questionable to play in the opener, while Jermaine Couisnard, Brennan Rigsby, and Lok Wur have already been ruled out.

A new report from Jon Rothstein shows that the Ducks are hoping to have both Ware and Soares healthy for Monday’s game, but that doesn’t nullify the fact that Oregon is still playing catchup before the season even starts.

Fortunately, they may have a pair of veteran players who can make it so those blemishes don’t tank the season.

Fifth-year PG Will Richardson returned to Eugene for one last hurrah this year, and veteran big-man N’Faly Dante is as healthy as he’s been in years, looking every part of a dominant center who could hear his name called in the first round of the NBA Draft next spring.

“We know we can throw the ball to [N’Faly] Dante, and we’ll do that a little bit. We know that Will [Richardson] and Keeshawn [Barthelemy] can handle it, so we know their experience will help there,” Altman said. “Here early, we’re just going to have to grind some out, get guys going, get some timing offensively with new guys. There is no magic wand, it’s going to take a lot of time and a lot of time in practice.”

The Ducks won’t have very long to figure things out, though. While the first few games on the schedule look winnable, Oregon will quickly be put to the test against the No. 3 Houston Cougars before heading up to Portland for the PK85, where they will play UCONN, and potentially Michigan State or Alabama.

It’s not a song and dance that is unheard of in Eugene. Every year, Dana Altman goes into the transfer portal and throws a bunch of pieces together, It usually takes some time to align the Rubik’s Cube.

We’ll see how long it takes this year.

UCLA and Arizona remain the top teams in the Pac-12 Conference, but the Oregon Ducks are right on their tail as the 2022-23 season begins. 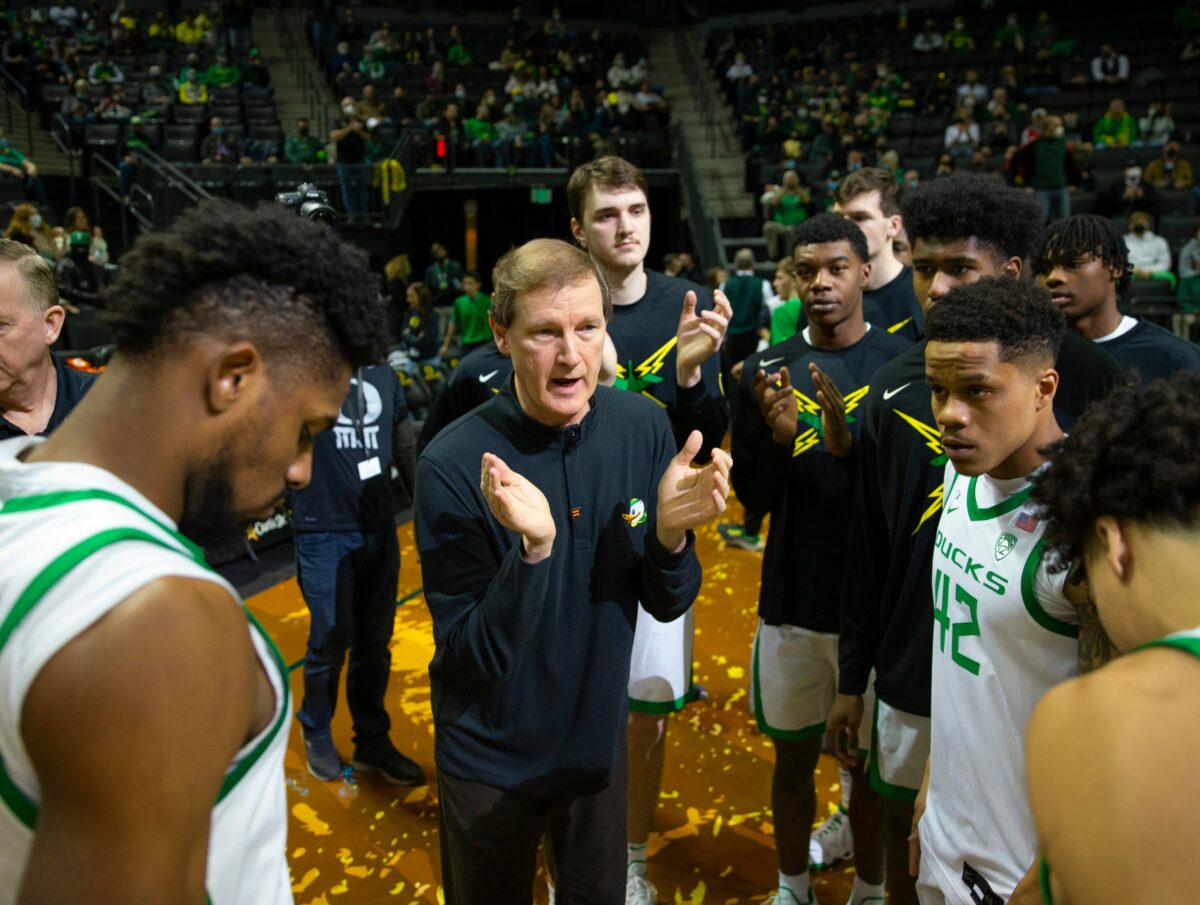 The 2022-23 college basketball season is officially here, and the Pac-12 conference will once again have multiple contenders for deep runs in the NCAA Tournament.

Dana Altman and the Oregon Ducks had a disappointing 2021-22 campaign, but they return senior guard Will Richardson and add key contributors around him, including freshman center Kel’el Ware and transfer guards Keeshawn Barthelemy and Jermaine Couisnard.

Meanwhile, both Arizona and UCLA lost significant contributors from last year’s squad, but both are still going to be dangerous after making key additions in the offseason.

Outside of the top three the Pac-12 is a bit of a crapshoot. Perhaps Stanford will step up under sophomore Harrison Ingram and push for a tournament berth? Or maybe Mike Hopkins finally put together the winning formula in Seattle for the Huskies? Heck, Arizona State might be a surprise contender after adding multiple big-time contributors via the transfer portal.

Here is a first look at the Pac-12 men’s basketball power rankings before the first official games of the 2022-23 season: