It was an ugly loss, but there were multiple bright spots for the Commanders from Week 4. 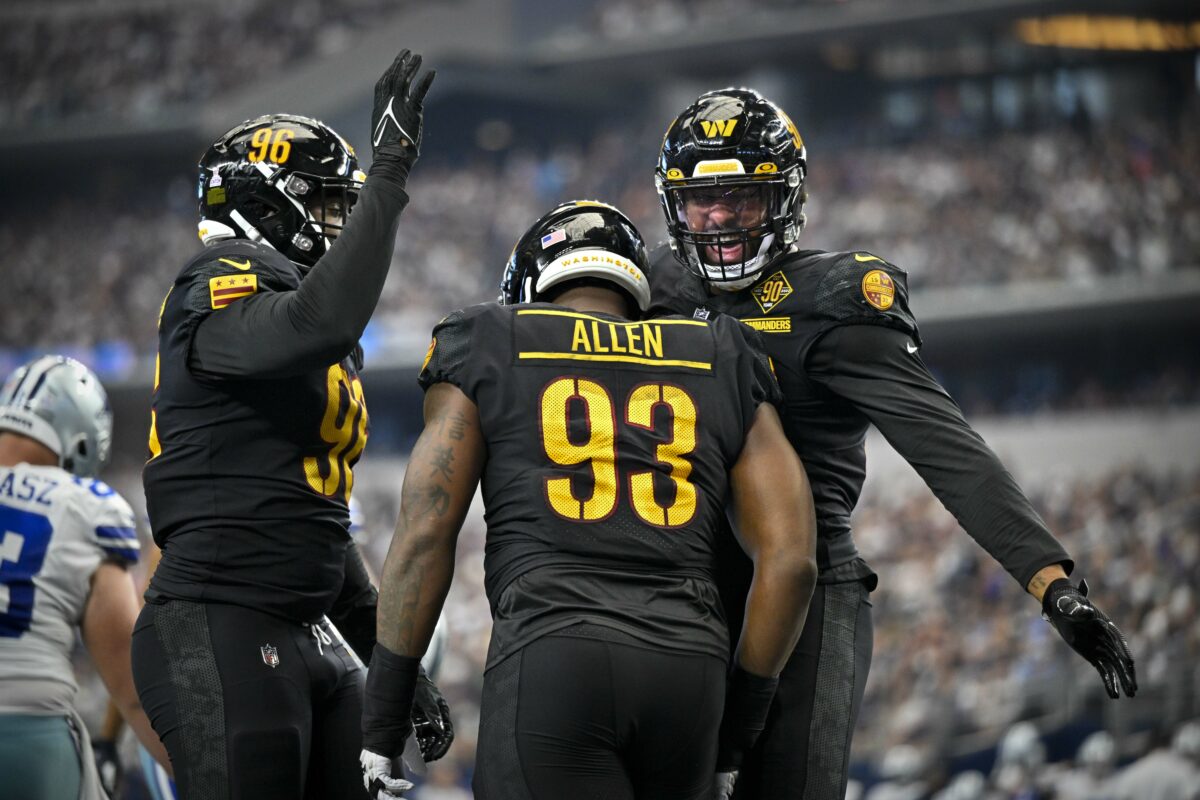 Despite a third consecutive loss for the Washington Commanders, there were some bright spots that should be recognized.

Allen came to play on the Cowboys’ side of the line of scrimmage, registering 4 tackles for a loss, most for both teams. The Commanders totaled 7 tackles for a loss, thus, Allen had more than half himself. His sack in the first quarter on a 3rd and 3 set the tone early, and he was a force all day. He also knocked down a Cooper Rush pass in the end zone that could have been an easy touchdown.

The rarely used running back in only five carries accumulated 48 yards (9.6 YPR). Williams enjoyed an 18-yard run to the left behind Logan Thomas and John Bates. In the 3rd quarter, Williams ran for 23 yards to the right getting a huge push downfield from Saahdiq Charles and good blocks from Thomas and Bates again both lined up together on a side.

Wentz struggled throughout, appeared rattled, unable to settle down and step into passes. However, trailing 6-0 in the second quarter, Carson lofted a beautifully well-timed pass to Jahan Dotson at the back right pylon for a touchdown on a 3rd & 2 from the 10-yard line.

Later in the 3rd quarter with the Commanders trailing 15-7, the two again connected, this time on a 3rd & 9 completion of 31 yards. Wentz had to step up, and extend the play, and Dotson had to make a shoestring catch.

Slye was successful on his lone field goal attempt, a 45-yarder in the 3rd quarter. Way punting six times managed to place five punts inside the 20.

The Commanders gained a very adequate 142 yards in 27 rushing attempts (5.3 YPC). This effort permitted the offense more opportunities as well as provided the defense some needed rest on the bench. The defense responded physically, limiting Dallas to a mere 62 yards in their 29 rushing attempts (2.1 YPC). The defense shut down Tony Pollard entirely, as his 8 carries gained only 6 yards.

Consequently, the Commanders ran 71 offensive plays to only 57 for Dallas, winning the time of possession battle 33:06 to 26:54.

Washington’s 3rd down defense in 2021 was at times nothing short of abysmal. They finished the season ranked 31st in the NFL. Sunday they held Dallas to converting only 5 of 15 third downs.

He did NOT blame the loss on officiating. 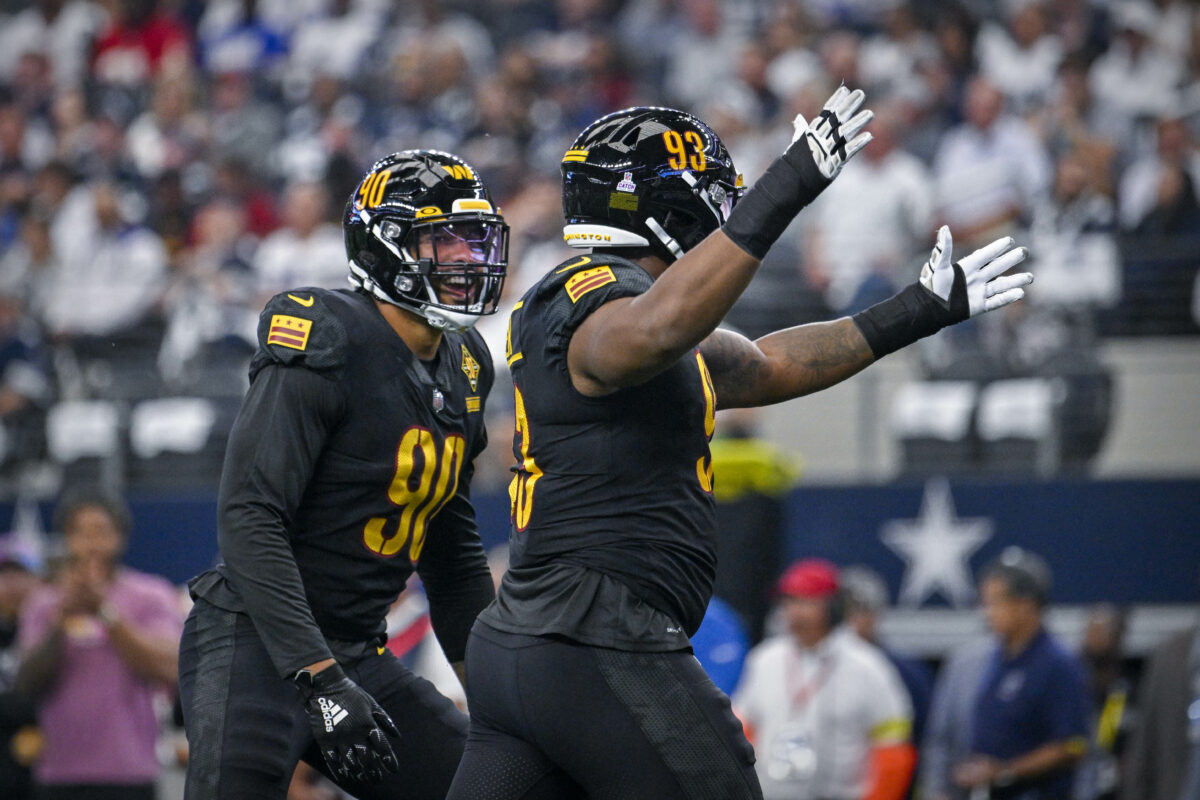 Washington Commanders defensive tackle and team captain Jonathan Allen is not a man of excuses. When you want the truth about something, you go to Allen. When former safety D.J. Swearinger talked himself out of town a few years ago, it was the young Allen who stepped up and said the right things.

The Pro Bowler spoke to the media after Sunday’s 25-10 loss to the Dallas Cowboys, and he was not happy.

“You are what you put on film, and at this point, we’re 1-3,” Allen said per Nicki Jhabvala of The Washington Post. “It’s a long season ahead, and one thing we’re not going to do is start turning on each other and making excuses. I thought the officiating was horrible, but it’s not the reason we lost. It helped, but that’s not the reason we lost. We got to do better as a team.”

Some will say Allen made an excuse about the officiating. He didn’t. He was honest. Washington was flagged 11 times for 136 yards, while Dallas was flagged four times for 20 yards. The Commanders were called for two defensive pass interference penalties, one of which was questionable.

Wide receiver Terry McLaurin, on two plays, one of which was in the end zone, didn’t get a flag after obvious contact. Matthew Berry explained it perfectly.

So no pass interference on Diggs grabbing McLaurin’s hip but very next play of course there’s another penalty on WSH. Commanders have played sloppy but call it at least semi fair. Come on.

This was critical as it was on 4th-and-15 in the fourth quarter. If not called for pass interference, Diggs should’ve been flagged for illegal contact. It was obvious.

Allen did his part in the game, leading the team with eight tackles from his defensive tackle position.

Mike McCarthy has a lot of respect for Washington’s defensive line. 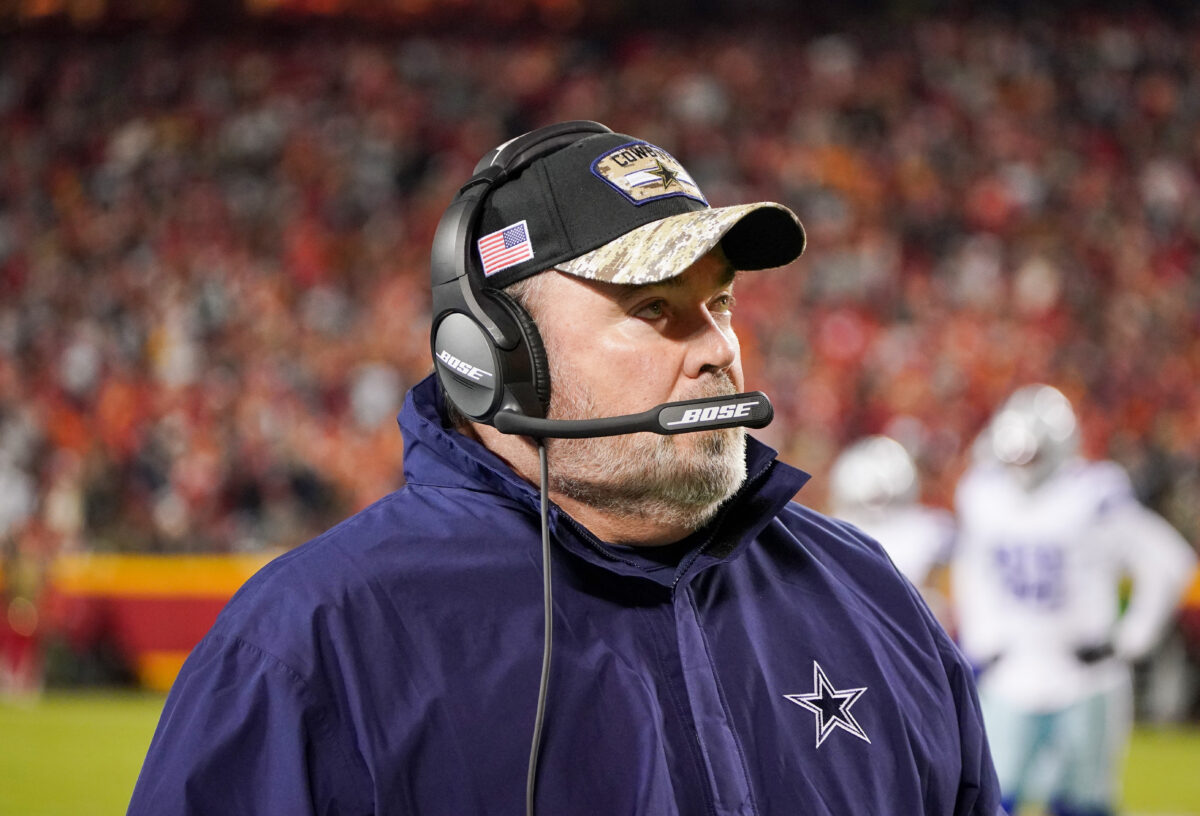 Mike McCarthy is in his third season as the head coach of the Dallas Cowboys. Even after leading the Cowboys to a 12-5 record in 2021, McCarthy faced questions about his job security because, well, Jerry Jones is his owner.

McCarthy is doing another good job this season with the Cowboys at 2-1 on the season. After dropping the season opener to Tampa Bay, Dallas lost quarterback Dak Prescott with a thumb injury. Backup Cooper Rush entered the lineup and has led the Cowboys to two consecutive wins.

Next up for Dallas is the Washington Commanders. And despite Washington’s struggles in a 24-8 loss to the Eagles last week, McCarthy understands each week is a completely different animal, especially as it pertains to division games.

“Well, I think the biggest thing is you got to watch yourself, especially in division games,” McCarthy said. “I saw the score, and I was watching the game on TV, 24-0; it didn’t feel that way to me, watching it live. Then when we watched on the coach’s tape, it definitely didn’t look that way. You can, you know … I’m a big believer you’ve got to guard against false confidence. I’m not one to say Hey, they gave up nine [sacks]; we’re going to get 12. To me it’s what happened last week has no difference in how you want to play. Because it’s so hard, it’s so difficult to win a game week in and week out.”

It’s difficult to believe the Commanders will allow nine sacks again. If that happens, then several people should be worried about their job security a week from now. Offensive coordinator Scott Turner must do more to help quarterback Carson Wentz, and Wentz needs to get rid of the football sooner.

As far as Washington’s defense, McCarthy respects the unit, particularly up front.

Allen is a Pro Bowler and one of the best in the NFL, while Payne is having a dominant start to his fifth season. Outside of those two, McCarthy defining Washington’s defense as scrappy tells you everything you need to know. The Commanders have talented players on defense but rarely appear capable of putting the pieces together for a dominant unit.

One of the keys to a Washington win is for its defensive line to control the line of scrimmage because the Cowboys want to run the football.

Here’s your Week 4 stock report for the Philadelphia Eagles ahead of their matchup against the Jacksonville Jaguars on Sunday afternoon. 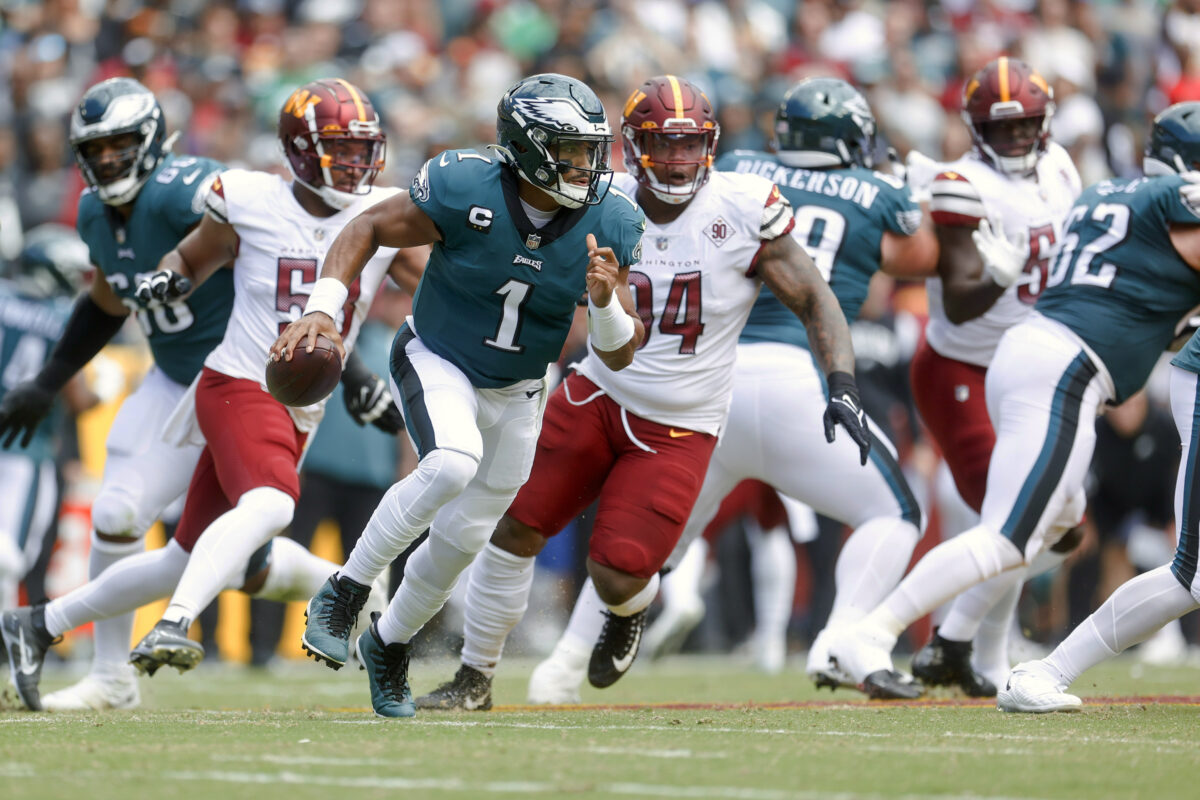 The Eagles are 3-0 and preparing for another massive showdown against a familiar face as Doug Pederson and the 2-1 Jaguars visit Lincoln Financial Field.

After a historic start to the season, Jalen Hurts is the NFC Player of the Month. Philadelphia’s defense has held their last two NFC opponents to eight points while sacking Commanders quarterback Carson Wentz 9 times last Sunday.

With Sunday’s matchup fast approaching, the Eagles stock report is out entering Week 4.

Jonathan Allen is honest about seeing so many Philadelphia fans at FedEx Field. 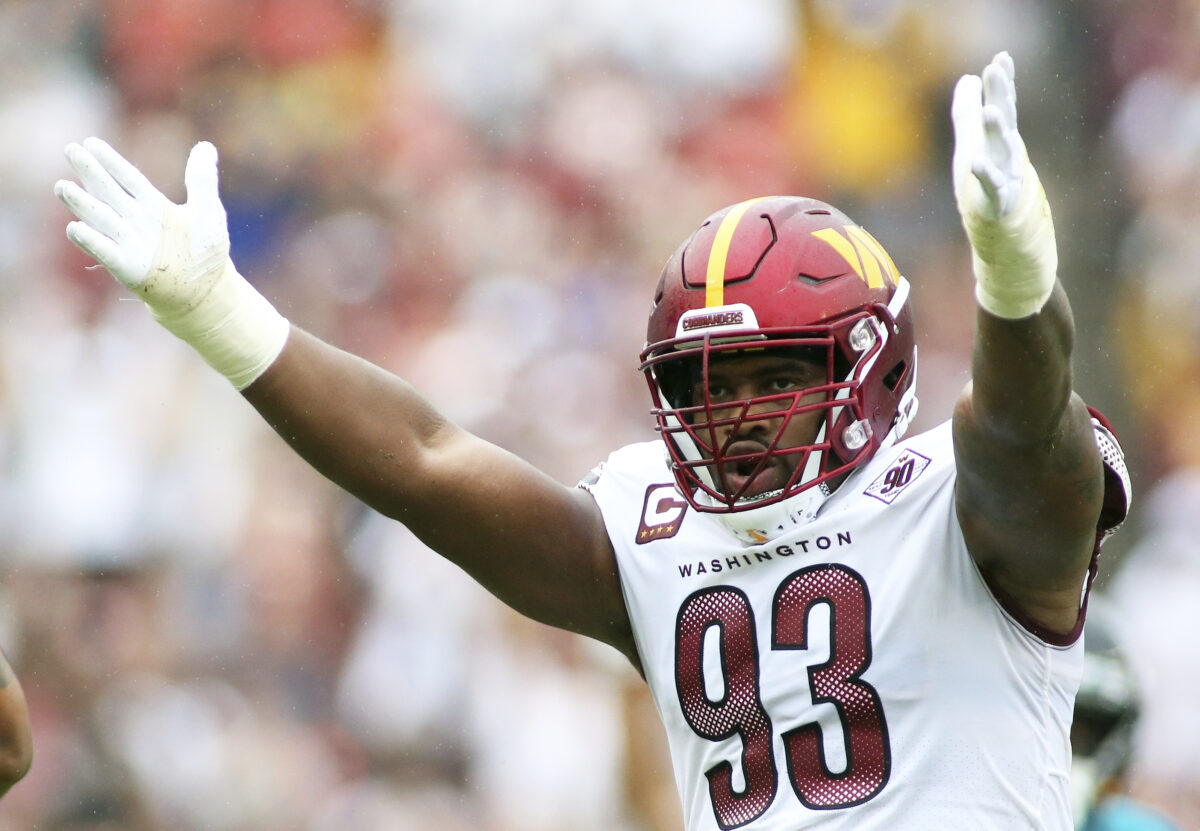 Washington Commanders defensive tackle and team captain Jonathan Allen always keeps it real. Don’t go to Allen if you want a colorful or controversial quote. Allen is realistic and honest.

In his weekly appearance on the “Sports Junkies” on 106.7 The Fan in Washington Tuesday, Allen talked about the Commanders’ 24-8 loss to the Philadelphia Eagles.

One troublesome aspect of Sunday’s loss to the Eagles was the amount of Philadelphia fans at FedEx Field. It’s nothing new, but Washington made a concerted effort in the offseason to try and limit how many of the opposing team’s fans found their way to FedEx Field.

The Junkies asked Allen if it irked him.

“I would like to say yes, but at the end of the day, we’ve got to put a better product out there,” Allen said. “We can’t get on the fans for not showing up if we’re not giving them a reason to show up. So, that’s not really something I’ve thought about recently because we’ve got to play better football if we want them to come out. It just is what it is.”

That’s the answer we’ve come to expect from Allen. Allen and other players have done contests and giveaways on social media in recent years to encourage Washington fans to come to games at FedEx Field. However, the continued losing and owner Daniel Snyder’s presence still keep Washington fans away.

For that to change, the Commanders need to build a consistent winner. And after watching the past two weeks, Washington is closer to yet another rebuild than sustained success. 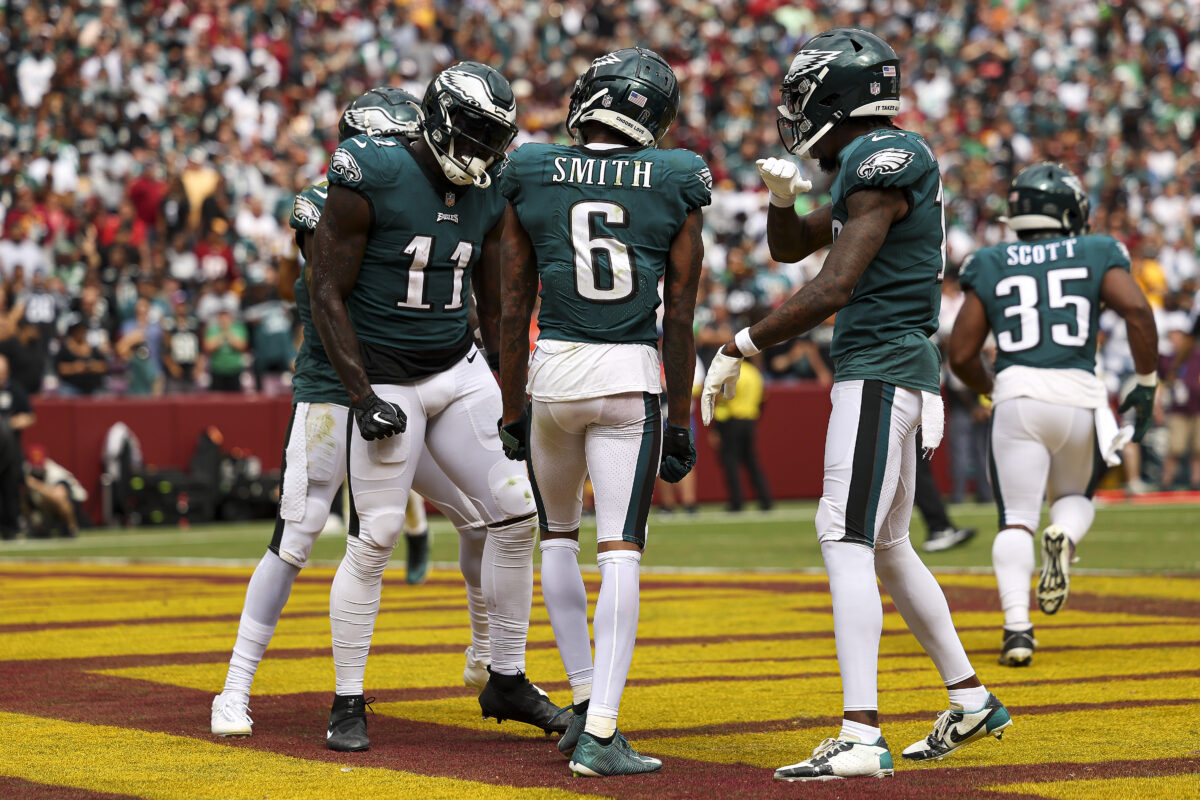 The Eagles beat the Commanders, 24-8, on Sunday afternoon at FedEx Field in a game that wasn’t that close, clearly establishing the pecking order in the division.

According to NFL Research, Hurts is the first player with at least 900 passing and 100 rushing yards through three games since at least 1950.

With Philadelphia now focused on the 2-1 Jaguars in Week 4, here are the studs and duds from the win over Washington. 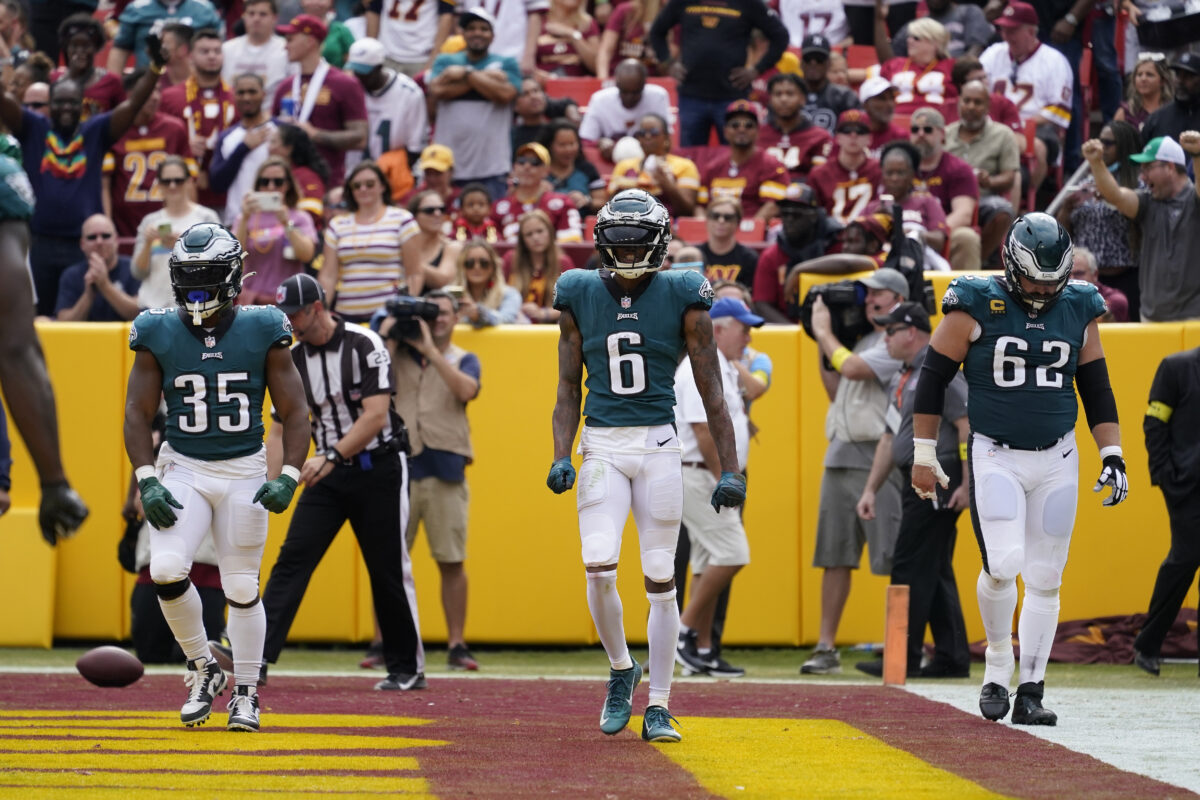 With the attention now turning to Jacksonville, here are best and worst PFF grades for Week 3. 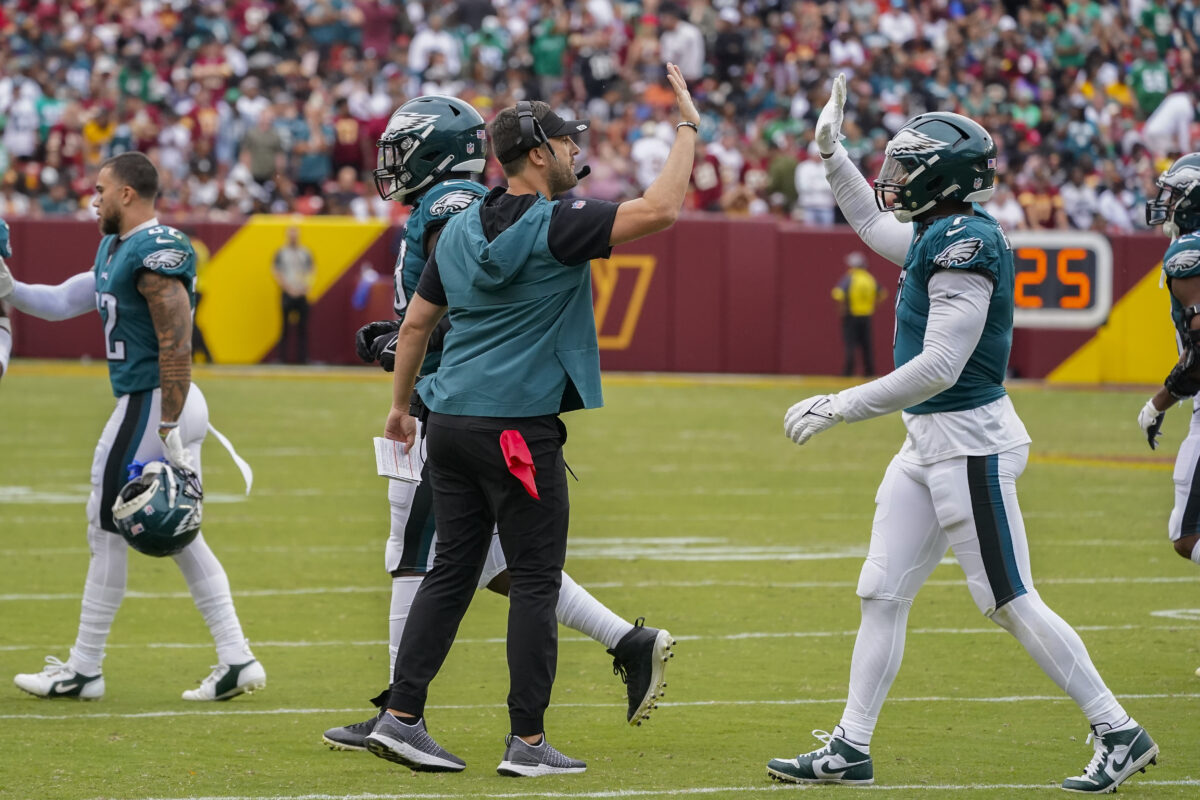 The Eagles are 3-0 and starting to position themselves well after a dominant 24-8 win over the Commanders in which the defense sacked former teammate Carson Wentz 9 times.

DeVonta Smith caught eight passes for a career-high 169 yards and a touchdown, while Jalen Hurts was 22 of 35 for 340 yards and three touchdown passes, one each to Smith, A.J. Brown, and Dallas Goedert.

With Philadelphia preparing for Doug Pederson and the upstart Jaguars, here is the national reaction to the Eagles’ hot start.

Here are several takeaways from the Week 3 win.

Here’s a look at the snap count and playing time usage from the Philadelphia Eagles’ 24-8 win over the Washington Commanders in Week 3. 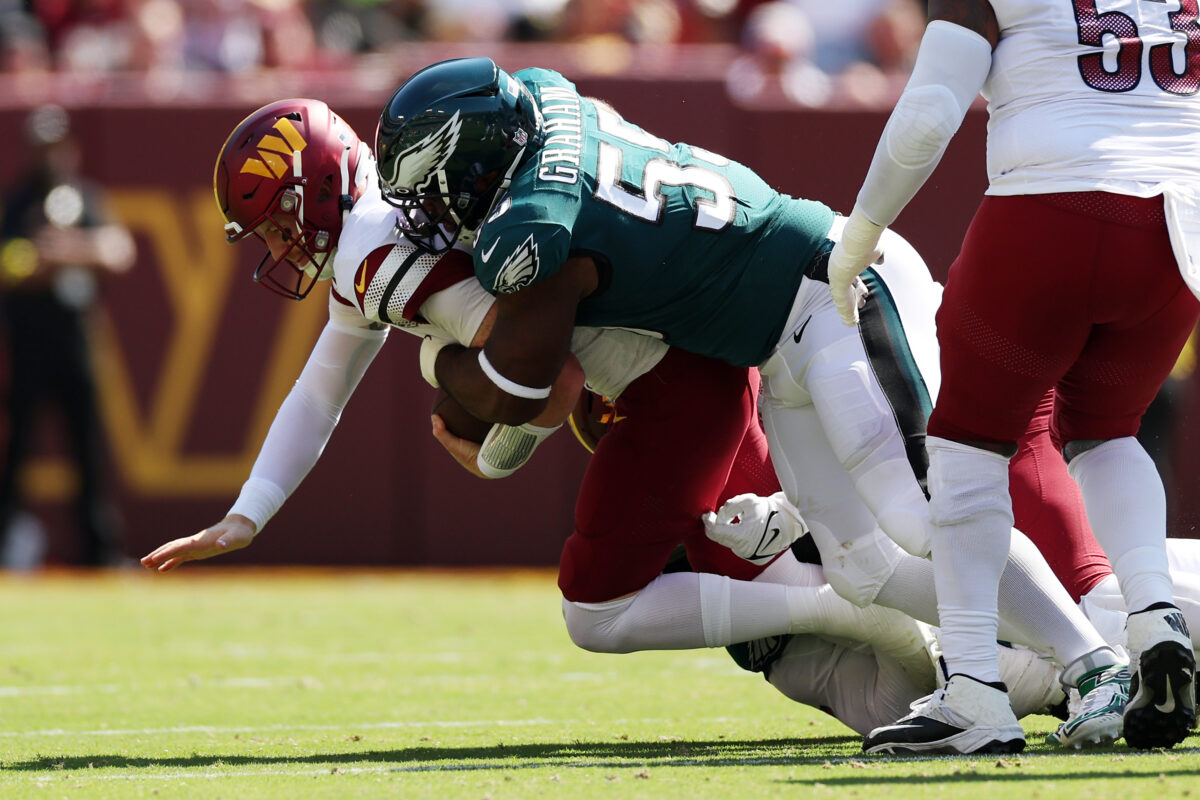 The Eagles are 3-0 and starting to position themselves well after a dominant 24-8 win over the Commanders in which the defense sacked former teammate Carson Wentz 9 times.

DeVonta Smith caught eight passes for a career-high 169 yards and a touchdown, while Jalen Hurts was 22 of 35 for 340 yards and three touchdown passes, one each to Smith, A.J. Brown, and Dallas Goedert. 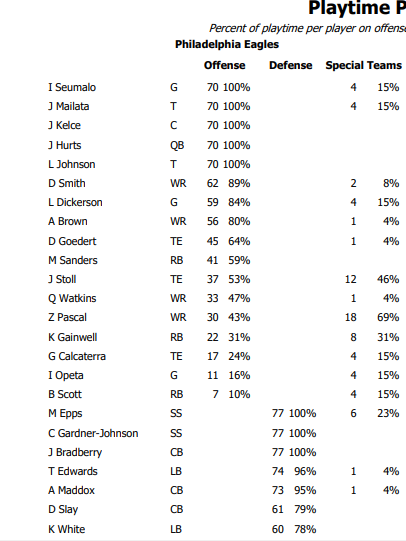 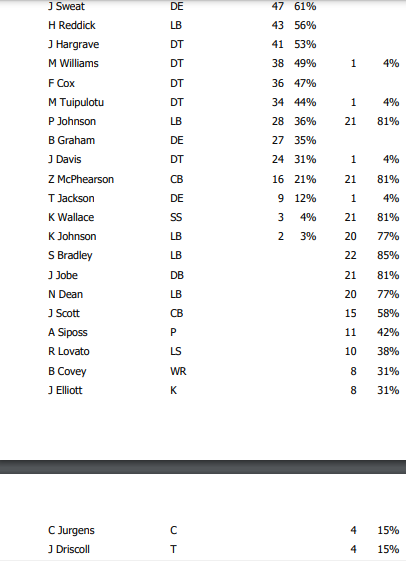 Here’s your snap count and playing time distribution for Week 3.