Cam Robinson says the penalty that wiped out a touchdown Sunday wasn’t his fault. 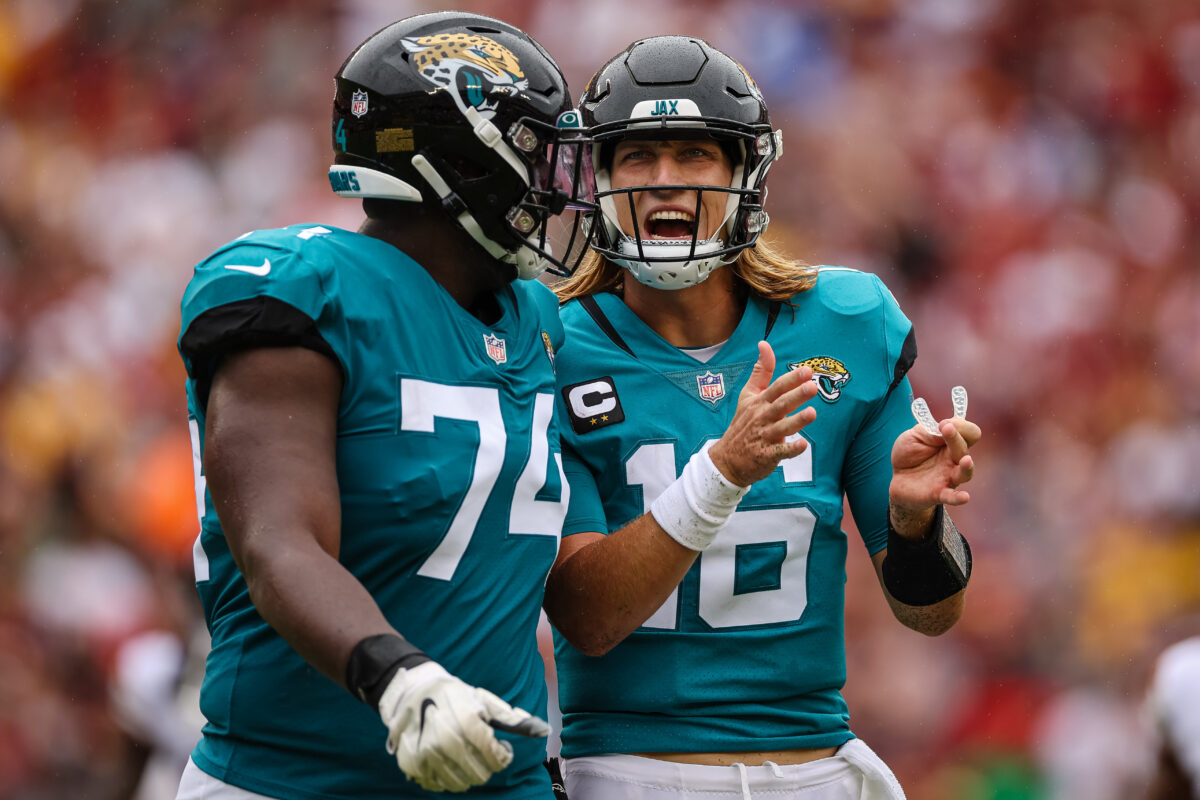 An ineligible man downfield penalty on Cam Robinson wiped out a touchdown reception for Evan Engram against the Kansas City Chiefs, but the Jacksonville Jaguars offensive tackle says that the mistake wasn’t on him.

On Wednesday, Robinson tweeted that his assignment was to run block on the Jaguars’ run-pass option play that eventually turned into a short pass to Engram.

Plot twist, a fan that actually knows what they’re talking about…On a RUN pass option (rpo) you block for the RUN. Who knew?🤷🏾‍♂️ https://t.co/os2wnEXlst

“That, to me, doesn’t necessarily fall on them because they’re doing what they’ve been asked to do,” Pederson said. “So that’s a coaching thing that we can fix. We talked about it as a staff today, and we have ways of correcting that and making sure they’re not downfield next time.”

After the five-yard penalty on Robinson, the Jaguars had an incomplete pass followed by a sack and were forced to settle for a 35-yard field goal. The kick cut the Chiefs’ lead to 20-10 with just under six minutes left in the third quarter.

Jaguars quarterback Trevor Lawrence, who was sacked 12 times in the first nine weeks of the season, was sacked a season-high five times by the Chiefs in Week 10.

Cam Robinson and Travon Walker were among the players who celebrated the Jaguars’ Calvin Ridley trade on social media. 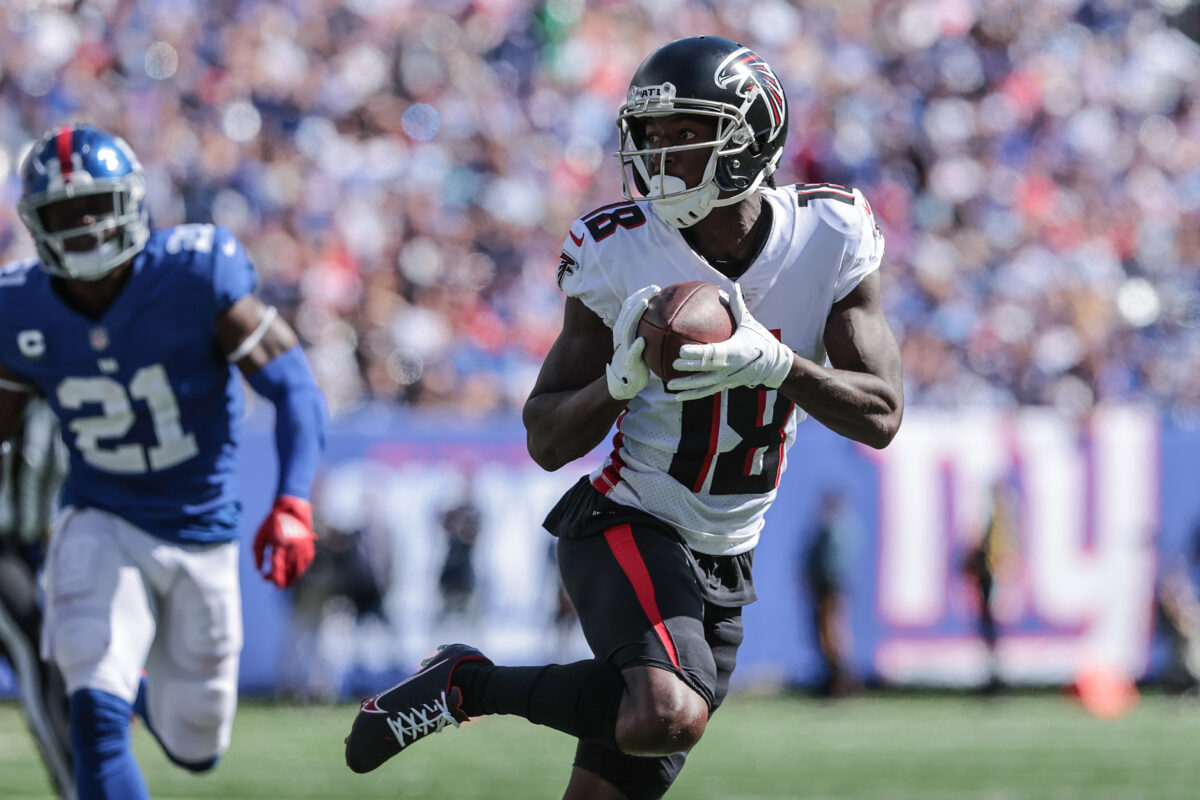 The Jacksonville Jaguars didn’t do anything at the NFL trade deadline to help themselves turn around a 2-6 start to the 2022 season. They did, however, add a player who could be an exciting contributor in 2023.

Nobody was more excited about the Tuesday trade with the Atlanta Falcons for wide receiver Calvin Ridley than Jaguars players themselves.

On Instagram, the Jaguars’ Travon Walker, Foye Oluokun, Tyson Campbell, and Daniel Thomas were among the many NFL players congratulating Ridley on his new home.

In 49 games with the Falcons, Ridley tallied 248 receptions, 3,342 yards, and 28 touchdowns. He’s currently serving an indefinite suspension for betting on NFL games in November 2021 while he was on the non-football injury list.

Ridley is eligible to apply for reinstatement in February 2023.

These five players need to show up in a big way in London. 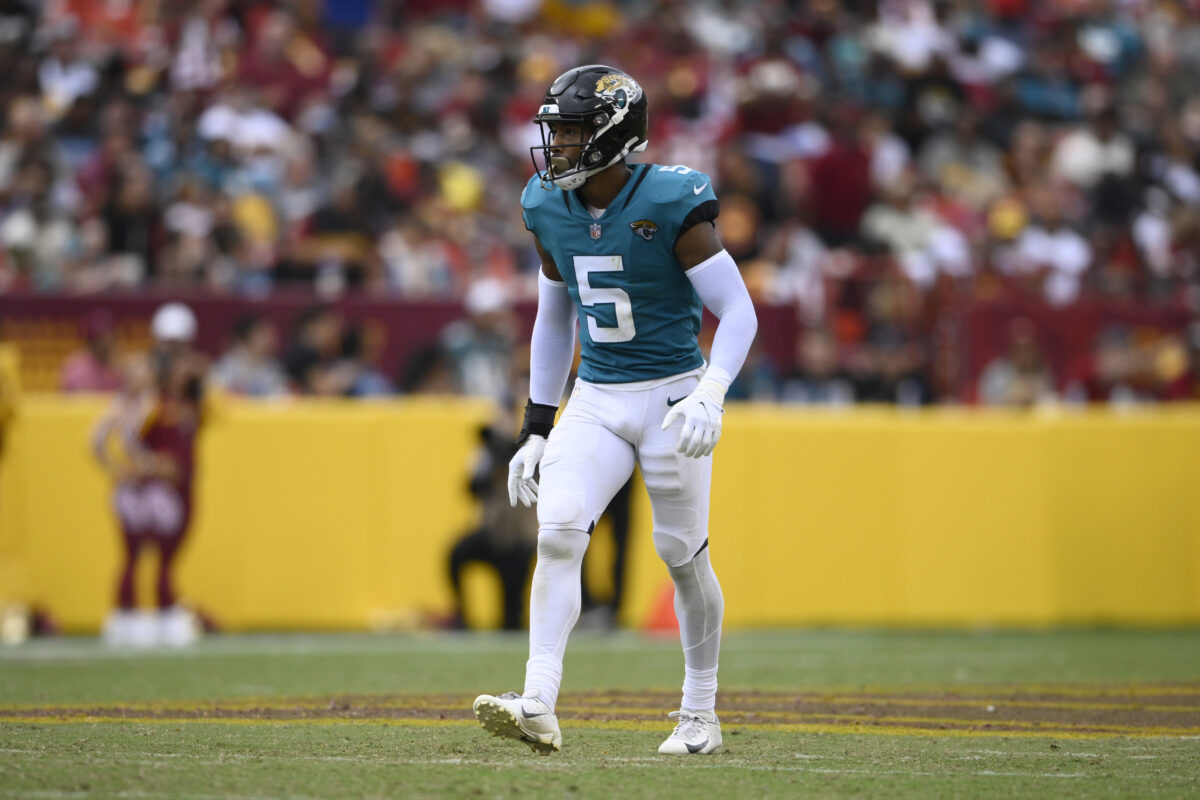 The Jacksonville Jaguars are seventh in total offense and have allowed the 10th fewest points in the NFL, but through seven weeks, they’re in the same exact place as the 2-5 Denver Broncos.

While the stats say the Jaguars should have a better record, the numbers say the Broncos are right about where they should be. Denver is dead last in scoring and keeps losing, despite having a top three defense.

Jacksonville keeps losing games it should win, though. It’s favored in Week 8, but lost the first two games it was favored in this season.

Here are five players who need to have a big day in London to keep the Jaguars from extending their losing streak to five:

“The most successful season I’ve had in the NFL came with [No.] 5 at quarterback.” 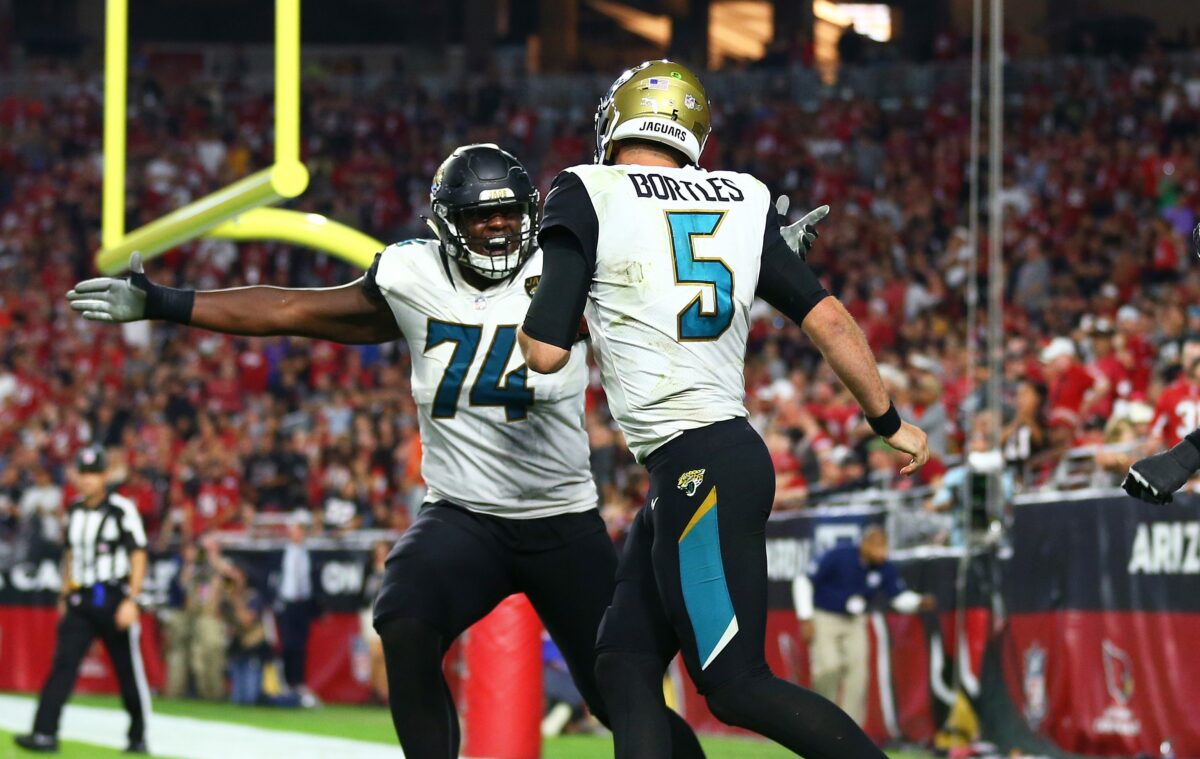 Offensive tackle Cam Robinson is one of only two Jacksonville Jaguars offensive players, along with lineman Tyler Shatley, who was on the roster while Blake Bortles was still the team’s starting quarterback.

On Wednesday, Robinson had kind things to stay about his former teammate, who announced his retirement in a podcast appearance.

“I would love to see a podcast [in his future] and if he does a podcast, I hope he would have me on the show at some point.”

Robinson was drafted in the second round of the 2017 NFL Draft and was a full-time starter as a rookie during the team’s run to the AFC Championship. Robinson’s second season with the Jaguars — which was Bortles’ last with the team — ended in Week 2 when he suffered an ACL tear. 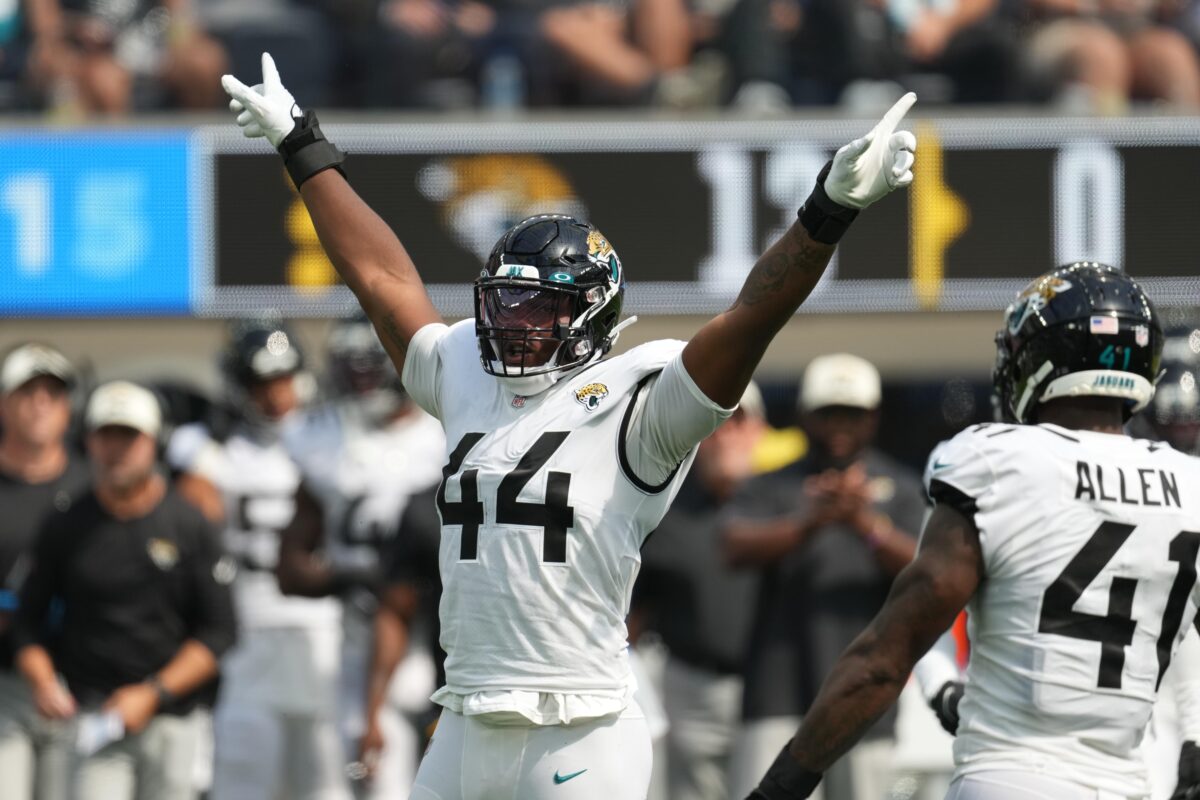 The Eagles are finishing their final practice of the week ahead of the Sunday matchup against the Jacksonville Jaguars.

Philadelphia will enter the matchup 3-0 and looking to slow down Trevor Lawrence and the explosive Jaguars offense.

There are dynamic football players on both sides, and we’ve provided ten to watch ahead of Week 4.

The Jaguars finished with 151 rushing yards and Trevor Lawrence was never sacked Sunday against the Chargers. 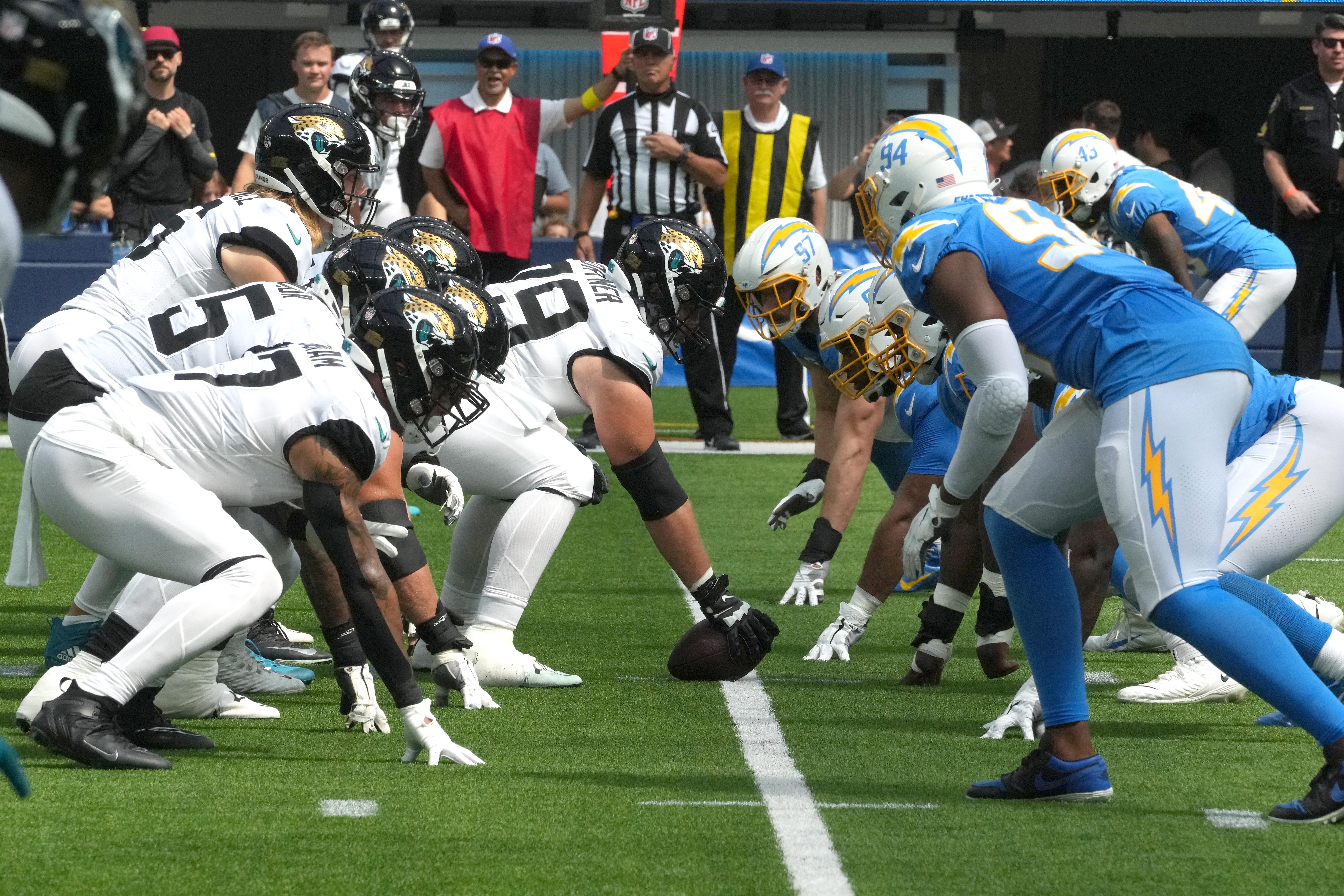 The Los Angeles Chargers boast one of the most dangerous pass rushing duos in the NFL in Khalil Mack and Joey Bosa, but against the Jacksonville Jaguars, the team finished with no sacks.

It didn’t help the Chargers’ cause that Bosa suffered a groin injury late in the first quarter and never returned. Still, Mack never made much of an impact and Jaguars quarterback Trevor Lawrence was allowed to stay cool, calm, and collected in the pocket while he racked up 262 yards and three touchdowns.

“The offensive line gave him protection,” Jaguars coach Doug Pederson said after the game. “When they give him the protection, and we have the skill guys to get open, he’s going to find them. That’s where it starts. I thought our offensive line really took control of this football game, did a nice job up front, not only in the run, but the pass.

“That’s the reason [Lawrence] can complete that many in a row, is just the fact that the offensive line is giving him time and guys are getting open for him.”

In addition to protecting Lawrence, the Jaguars offensive line also cleared the way for 151 rushing yards, including a 50-yard touchdown for James Robinson on a fourth down.

The down blocking by the TE and then Scherff gets outside on the pull pic.twitter.com/RPRUwEuuQd

Robinson earned captainship for the Jaguars’ season opener after signing a big extension in the offseason. 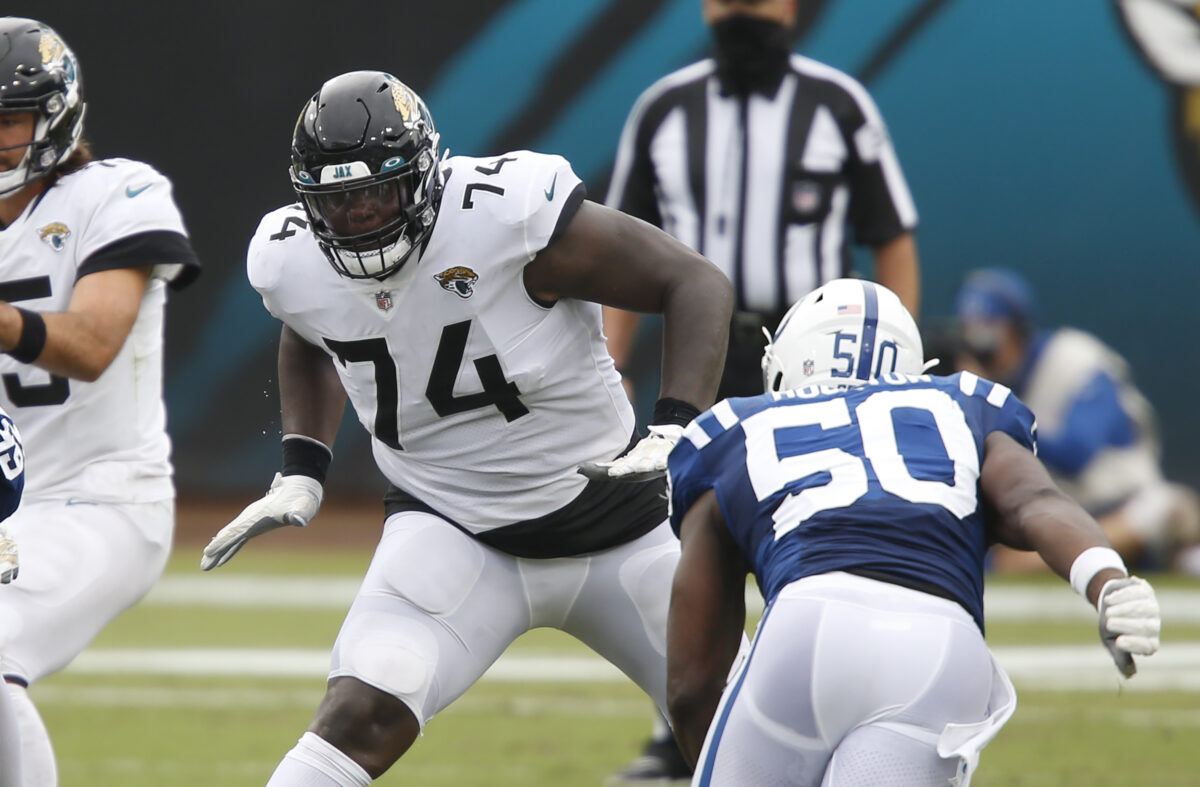 The Jacksonville Jaguars’ roster of captains for their Week 1 matchup against the Washington Commanders is officially set. After letting the players elect five permanent captains for the season, head coach Doug Pederson has reserved the right to name one of the honorees on a rotating basis weekly based on what he sees in practice leading up to each game.

On Friday, Pederson revealed his selection for the first game.

“[It will be] Cam Robinson (OL) this week,” Pederson announced when asked about his decision. “He’s a good one to start the year with the five. They were hand-picked. He’s really shown great leadership with the team since being re-signed back in the spring and all that, and he’s bought in. It hasn’t been easy for him, as well, here. He’s had some challenges and what-not, but he’s in a good place, so a good person to kick it off with.”

Jacksonville’s offensive line will be a crucial part of the Jaguars’ game plan against the Commanders given how deep Washington’s line is on paper. Even with former first-overall pick Chase Young sidelined with an ACL injury, the Commanders’ front seven are still a force to be reckoned with, and could make life miserable for quarterback Trevor Lawrence if his line doesn’t hold up.

Robinson was a second-round selection by the Jaguars back in 2017, and has been through all of the team’s ups and downs over the years. Robinson re-signed in Jacksonville in April, securing a three year $54-million contract that was negotiated after the team used their franchise tag on him.

With new players on the Jaguars’ offensive line, Robinson has been a rock, and looks to be a cornerstone of Jacksonville’s front-five for years to come.

The Commanders will be without a starting safety for the Jaguars’ season opener. 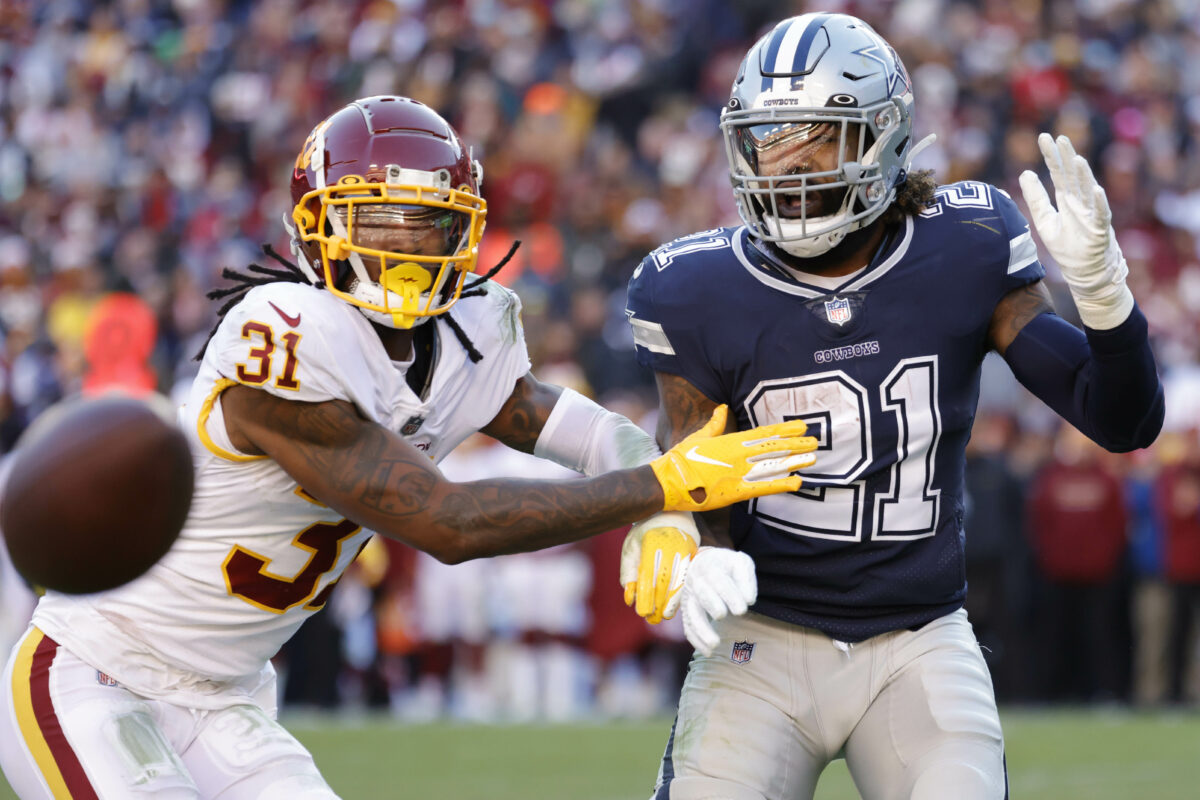 The Washington Commanders will be without starting safety Kam Curl for a Week 1 game against the Jacksonville Jaguars.

Curl, 23, was ruled out with a thumb injury on the Commanders’ final injury report of Week 1 and tight ends Logan Thomas and Cole Turner were both listed as questionable due to knee and hamstring injuries, respectively.

The Jaguars listed defensive lineman Folorunso Fatukasi as questionable for Sunday. The team also added offensive tackle Cam Robinson to the report with an ankle injury that limited him Friday, but he’s expected to be a full go Sunday.

Fatukasi, 27, participated in practice all week on a limited basis while dealing with a nagging calf injury that he re-aggravated during a preseason game.

“He did well,” Jaguars coach Doug Pederson said Friday of Fatukasi’s practices earlier in the week. “No setbacks. We’ve got to get through today, obviously. Today’s a big day. Fridays are our review days of the game plan, so if we get through today, then things look positive.”

The Jaguars signed the former New York Jets defensive lineman in March to a three-year, $30 million deal and Fatukasi is expected to start at defensive end in Jacksonville’s 3-4 defense.

With the Jags’ first preseason game of 2022 in the books, here are six players whose stock is up heading into their second preseason game. 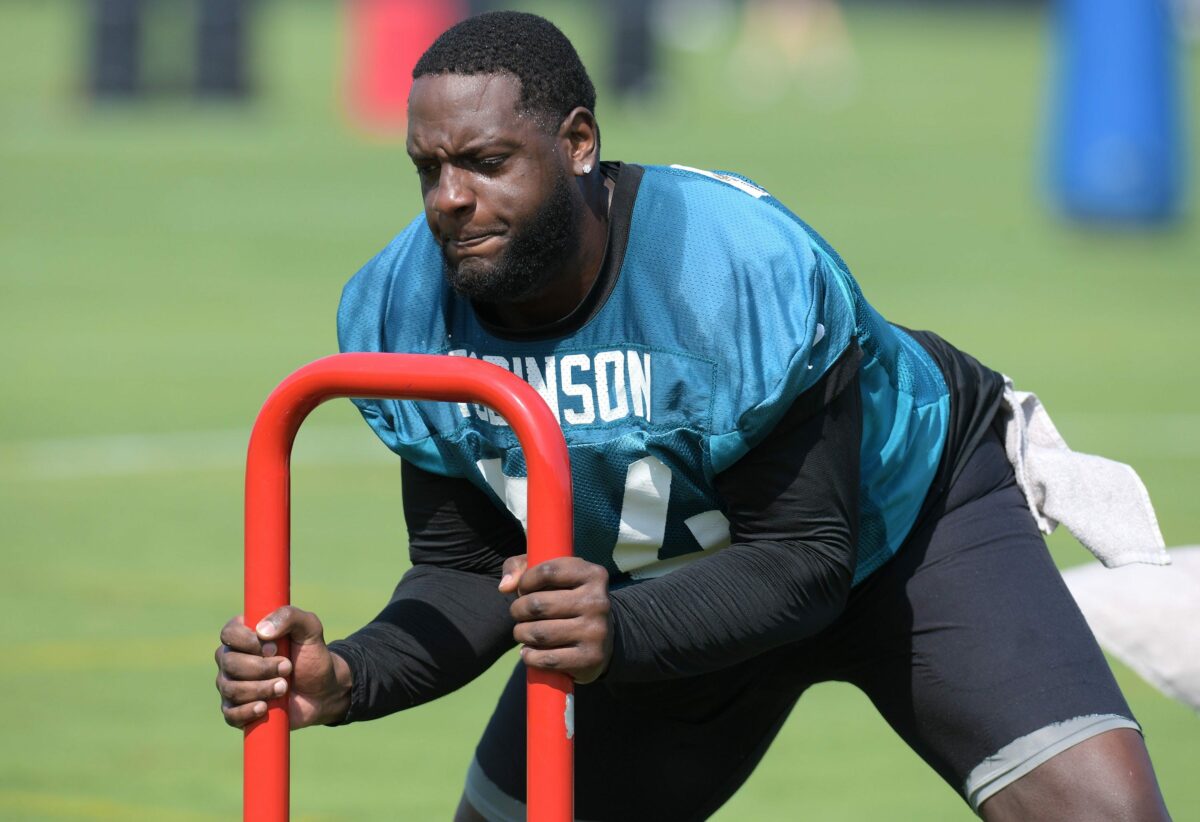 The Jacksonville Jaguars’ first preseason game against the Las Vegas Raiders is behind them, and now it’s time for them to look forward to their preseason opener at home. While the team lost the game 27-11, their young players gave the coaches a lot to evaluate heading forward before the first wave of cuts on Aug. 16.

Some players came out of the Hall of Fame Game with some momentum and took advantage of the opportunity they received with over 20 players sitting out. Some players who didn’t take the field last Thursday also have momentum from how they have performed at practice. Let’s take a look at some players from both categories before the Jags’ upcoming game against Cleveland at TIAA Bank Field:

Cam Robinson showing why he got PAID! 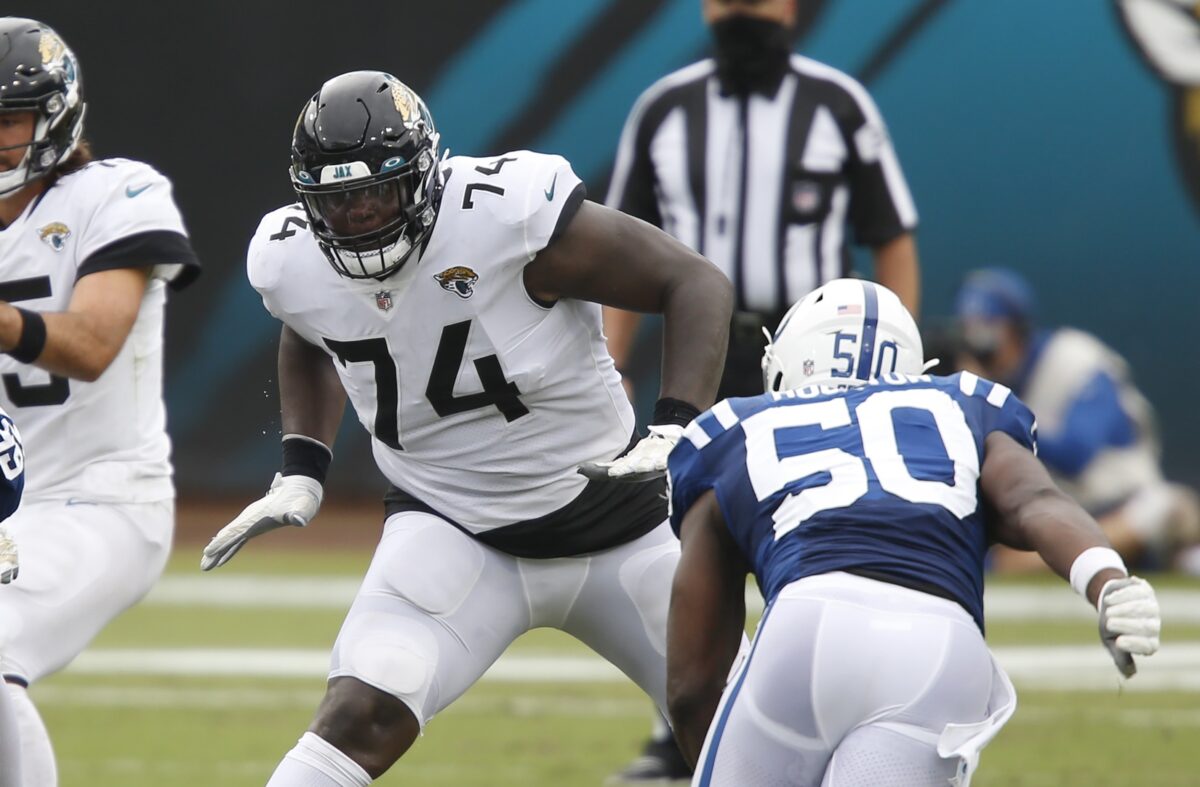 Sometimes right after getting a massive contract or payday people can get lazy and lose some of their drive. This is not the case for former Crimson Tide offensive lineman, [autotag]Cam Robinson[/autotag], who just inked a three-year deal worth $54 million with the Jacksonville Jaguars back in April.

The reports out of Jacksonville right now are that Robinson is having the best training camp of his career, and has been the most dominant player on either side of the ball. Robinson has been shutting down Probowl edge rusher, Josh Allen, and asserting his dominance over the No. 1 overall pick in the 2022 NFL draft, Trayvon Walker.

Robinson will be the key piece to the Jaguars’ offensive line that is tasked with protecting their franchise quarterback, Trevor Lawrence.

(He beat Josh Allen again as I was typing this)#Jaguars pic.twitter.com/yRw2bHNFXp