Despite a reputation with fans as a penalty-prone liability, 7-year vet Anthony Brown has earned praise from Cowboys coaches this offseason. | From @ToddBrock24f7 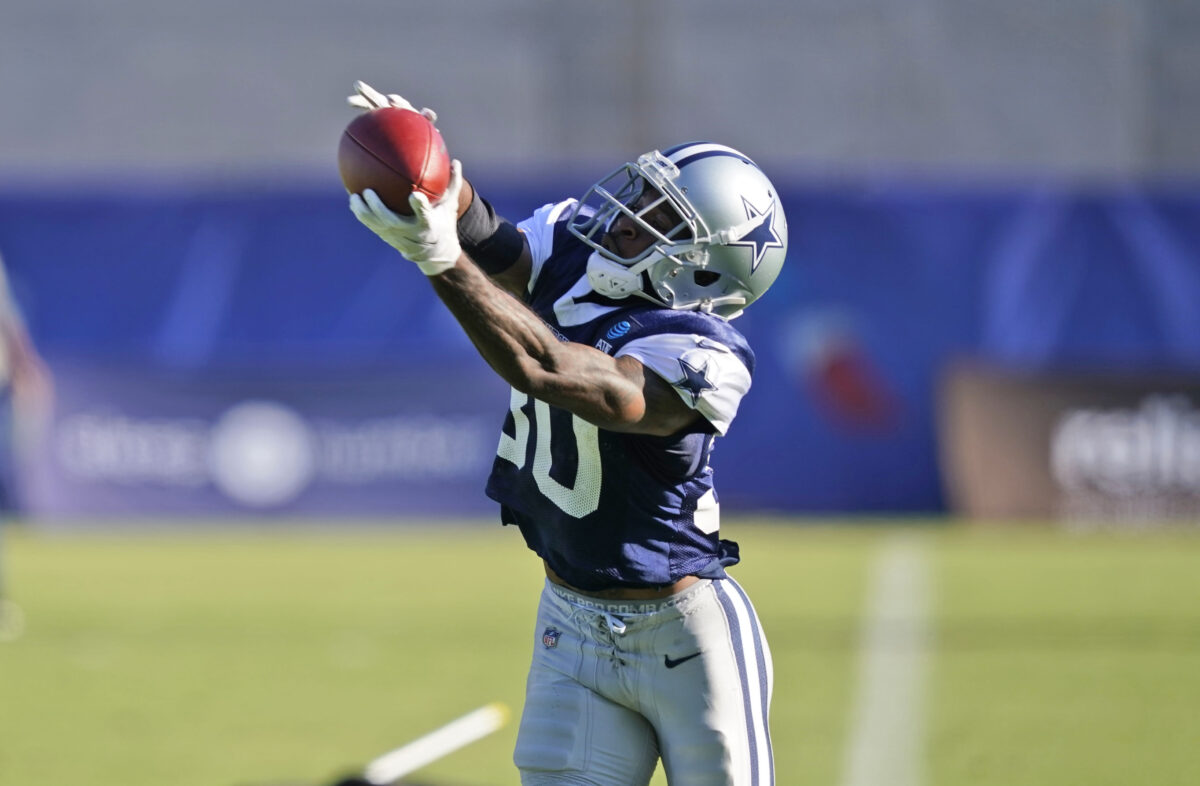 With the league interception leader playing opposite him, it can be difficult to stand out. But Cowboys veteran cornerback Anthony Brown has definitely gotten the attention of head coach Mike McCarthy.

And McCarthy would like to see Brown get a little more respect from those outside the building.

“I think he’s someone that should get more love from you guys,” McCarthy told an assemblage of reporters recently in Oxnard. “Just a suggestion.”

The former sixth-round draft pick out of Purdue was a popular target of Cowboys Nation’s ire last Thanksgiving after he committed four pass interference penalties in an overtime loss to the Raiders.

It was a particularly brutal game for the veteran, now 28 years old. But that game wasn’t indicative of who Brown truly is as a player, McCarthy argues.

“I think if you look at A.B., the way he played last year, he had a heck of a year,” the coach said over the weekend. “I think from year one to year two [of McCarthy’s own tenure], he made the strength gains that he felt that he needed and I thought it really showed last year.”

Brown started 16 games last season and notched career-high marks in passes defensed (17), tackles (71), and interceptions (3). He added to that pick total in the team’s postseason loss to San Francisco with a fourth-quarter interception to set up the touchdown that brought the Cowboys to within six points.

And McCarthy says he’s picked up in training camp right where he left off.

“Best camp that I’ve been a part of, absolutely,” the coach confirmed. “He’s talented. He plays the right way. He’s definitely a lot more comfortable in our scheme, which I think our whole defense is. I think you can see it in how they’re flying around. The communication on defense has been excellent so far, and we want to build off it today. We’re off to a really good start, and A.B.’s a big part of that.”

Some of that is sheer talent. Some of it comes from six years of NFL experience. But a huge part of Brown’s camp development is a result of simply returning to the fold for a second straight season under defensive coordinator Dan Quinn and defensive passing game coordinator/secondary coach Joe Whitt Jr.

“Continuity is good,” Whitt has said, per the team website. “We’re not re-teaching a lot of the concepts. I talk about undergrad and graduate levels. Most of the guys that are playing right now are graduate level; now can we step it up and get that Ph.D.?”

Entering his seventh year of study, Brown- who’s switched his jersey from No. 30 to No. 3 this year- is right on track to earn that advanced degree, even if he bombed a pretty major pop quiz last Thanksgiving.

“I just see a very, very consistent player from last year. He had the one game against Vegas,” McCarthy admitted. “If you had heard the conversations with the officials that we talk about- not that you can go back and change calls or anything, and we’re not complaining- it was good stuff.”

Outside of the Raiders game, Brown was flagged just one other time in all of 2021. So the reputation is, in fact, unwarranted. C.J. Goodwin had more penalties than Brown. So did Micah Parsons. And Randy Gregory. Trevon Diggs racked up twice as many.

To that end, Brown and all the Cowboys have gotten some extra time this offseason working with NFL officials at their own practice sessions. The refs are getting reps, yes, but the players are also able to get a better handle on how things will be called once the season begins.

Defensive pass interference has been a particular point of emphasis.

“Every year we’re talking about that as a league and how that’s officiated better,” McCarthy offered.

“I thought [NFL referee] Brad Allen did a nice job speaking in the team meeting, but also in our individual meetings. But we were able to take a dozen throws- all of these contested catches that we’ve had out here- and talk them through,” he continued. “I tell guys we all know the rules, and they know the rules, too. But what you see in this league is it’s not only which rules they’re going to emphasize more than others, but exactly how they’re going to emphasize them.

“They want to regulate the competition. They don’t really want to officiate it. And I think there’s a difference.”

Which begs the question: if Brown had not drawn four flags last Thanksgiving Day, how would Cowboys fans feel about him? With his contributions to the stat sheet still overshadowed by Diggs and his 11 interceptions, would Brown be any less underappreciated?

It’s hard to say for sure. Maybe 2022 will reveal that answer.

Brown himself went on record to lay out some sizable goals for himself this season.

But even if he does all of those things, given the mega-watt star power all around him in the Dallas defensive huddle, Brown may find himself still flying under the collective radar, through no fault of his own.

“I’ve been here going on seven years now,” Brown told the Dallas Morning News on the topic. “I’m used to it. I’m immune to it now.”